Vladimir Petković’s Switzerland were full of tactical intrigue in this surprisingly energetic first semi-final of the UEFA Nations League. Switzerland’s plan in midfield enabled them to intricately pick holes in Portugal’s shape, which resulted in them generating countless great attacking moments. Most of them fizzled out into nothing, however, giving Ronaldo the chance to take the spotlight, as he has done so often.

Fernando Santos made quite a few changes to the side that drew 1-1 with Serbia in their Euro 2020 qualifier in March. Nélson Semedo came in for João Cancelo as the only defensive adjustment at right back, yet there were plenty further ahead. The highly talked-about João Félix would get his senior debut here, partnering Cristiano Ronaldo up front. Two other stars of the 2018/19 season – Rúben Neves and Bruno Fernandes – also got starts in midfield. This match also saw a switch to a 4-4-2 diamond setup.

Switzerland were also held to a draw in their last match, which finished 3-3 against Denmark. From that game, Petković made three alterations: Nico Elvedi was replaced by Fabian Schär in the back-three, and the strike force was swapped out in full – Xherdan Shaqiri and Haris Seferović returned to the frontline in place of Breel Embolo and Albian Ajeti. The coach kept to his 3-5-2 system for this clash, even though off the ball, one could call it a 4-4-1-1.

The strongest aspect of Switzerland’s possession-based game was their midfield setup. Aside from Granit Xhaka, who always held his position very deep, the interchangeability of the advanced midfielders was refreshing to see. Not only were they rotating in and around Portugal’s midfield-three base, as Shaqiri looked to drop in, they were also swapping positions out wide. It was a natural move for Steven Zuber to make a run inside and then have Remo Freuler drift wide to receive free of any pressure, and vice versa on the far side.

What was even more notable than their exploitation of the flanks was their dominance in the center. As Bernardo Silva, the number ten, pushed up in his press against the back-three – forming a 4-3-3 shape off the ball – it left an opportunity for Switzerland to overload the midfield. They did so by having Shaqiri join in to create a very narrow and flat four. Whilst it seems counter-productive to be so flat, it offered a four-versus-three overload When one team has more players in a certain area or zone than the other team. in the middle. Because of the presence of Seferović and the wing-backs, Switzerland’s midfielders were relieved of any pressure from Portuguese defenders. 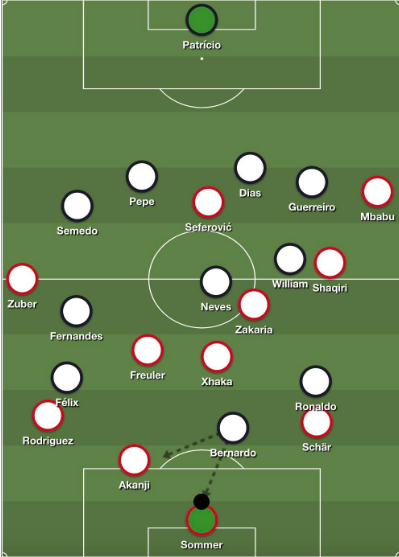 Switzerland overloading Portugal in the buildup phase by dropping Freuler deep. Notice the four-versus-three Switzerland have in the middle.

Slightly deeper, Shaqiri and Denis Zakaria ensuring the other two Portuguese midfielders could not step up onto the deeper midfielders. From there, the visitors could execute a simple left-to-right transition through to the attacking phase. This more than fit in line with the fact they aimed to generate most of their crosses down Kevin Mbabu’s side. The Swiss wing-back attempted ten of the away side’s twenty-five crosses, with an overall total of fifteen coming down that side (excluding corners). Portugal’s not-so-mobile William was often too late to close down because he had business in the center, leaving left back Guerreiro in a two-versus-one situation on the flank.

A defect of William covering Mbabu was that it meant that the Swiss international could easily make runs off the back of the not-so-committed midfielder. That was exactly what happened later in the half when Shaqiri received in the space being left behind Neves’ pressing exploits, which was uncovered for by Bruno Fernandes. He then slipped in Mbabu’s run, as he cut it back for Seferović but he could not keep his effort under the crossbar as it rattled out of play. 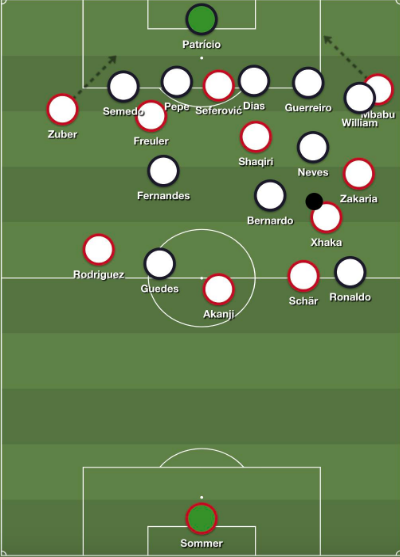 Later on, their midfield would stretch right across to compensate for the lack of immediate cover against Mbabu’s width. This saw William Carvalho frequently drift wide to pressure the Mbabu, whilst Neves – with the support of the relentless Bernardo – stepped out to place further pressure on the ball whilst continually cramping that favored flank.

Whilst Seferović is no doubt an optimal crossing target, there was not quite enough support for him. Zakaria was used as a tool to create space for Shaqiri on the right side, by pushing up into an inside forward position, meaning he could drop deep and to the sides. From these positions, he could feed through Mbabu’s blind-sided, out-to-in runs or attempt long diagonal balls across to meet the runs of Zuber.

Portugal’s aforementioned diamond setup off the ball might have had its problems, but it is a fantastic formation when transitioning from defending to attacking. It nearly gave them the lead within twelve minutes, as Bernardo took his nominal position off the ball, center-forward in a 4-3-3 formation. The attacker cleverly read the diagonal pass by Manuel Akanji and intercepted it, before laying it into Cristiano Ronaldo, whose shot was woefully misplaced.

Fernando Santos’ possession setup was not quite as meticulous as Petković’s. There were some similarities however, in particular the positional rotations in midfield, especially between William and Neves. Since Bernardo and Ronaldo were dropping deep into midfield all of the time, Neves was frequently balancing the structure by filling those holes slightly further ahead of him. What this meant was that he arrived into his holding midfield position quite late, and to good effect, as he was not being tracked.

What also helped to make this the case was the fact that Switzerland’s 3-4-1-2 press quickly dropped into a 3-5-2 or 4-4-1-1 deep block, dependant on the positioning of left wing-back Steven Zuber. There was not enough pressure on Portugal’s defensive midfielder when Switzerland dropped back so deep. This was key in the buildup to the opening goal, where Neves dropped back into his deeper position. Then, as part of the three-versus-three Portugal wanted to expose their opponents to centrally, Ronaldo received the ball just in front of Schär; he hurdled the challenge and was then taken down. Whilst many of his suspenseful free kicks have been blazed high and wide, this one stayed true and low, wrong-footing Yann Sommer, to give his country the lead after twenty-five minutes.

Another facet of Portugal’s game were their direct switches, specifically those aimed towards players in between the center-back and wing-back on either side. Although this channel was not so open, the gap was big enough to be exploited. Be it as a last resort or not, the deep ball-holders were more than willing to fire them into those attackers, into the dropping Bernardo Silva, Ronaldo and Félix.

It worked to a tee before half time. Having just seen a glimpse of João Félix – who had a muted first half – Pepe executed a diagonal switch into that small pocket, where Ronaldo dropped off from Schär to take the ball down. Then, stylishly, he found Félix’s run through the far-sided channel with a no-look through ball. Unfortunately for the youngster, his end product was not quite there having been put off balance by Ricardo Rodríguez. 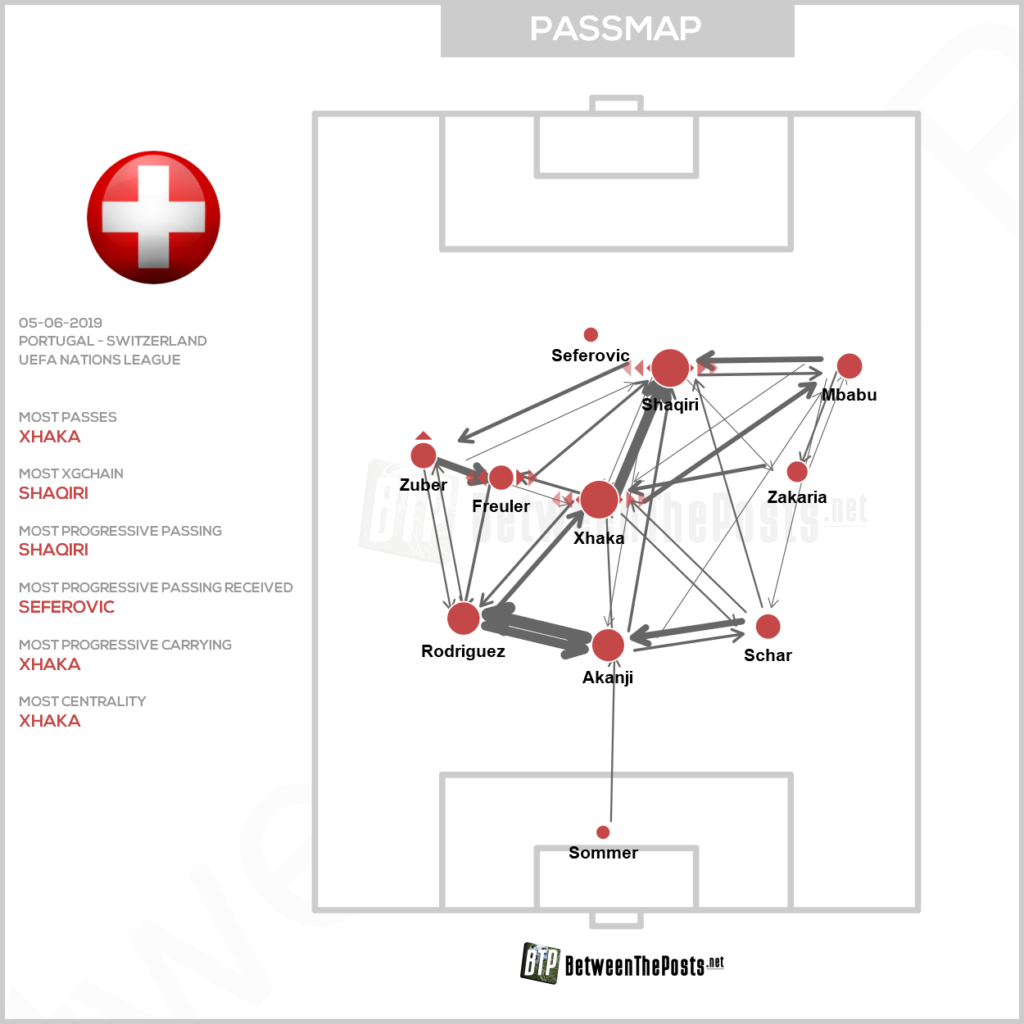 By this point, Switzerland were more than deserving of being at least level, most notably Seferović missing out on some good opportunities. Thanks to some vintage VAR action, they got what they deserved shortly before the hour mark.

As Semedo clipped the heels of Zuber to see him go down the box in one end, Portugal capitalized on the unsettled and distracted players to launch an attack of their own, leading to an attack that was finished with a foul from Schär on Bernardo. The referee awarded Portugal the penalty, but his closer look at the initial penalty call resulted in him going the other way, giving the Swiss their chance to equalize – a chance not wasted by Rodriguez. Level game after 57 minutes.

After this point, sadly, the game lost its edge. It was clear that the post-season break and also the fatigue was finally taking its toll. The rate of unforced errors increased and so it was a bit less of an end-to-end game, without genuine attacking substance.

Soon enough, it was time for the game changer to step back up to the plate.

Once again, Neves helped to exploit the aforementioned defensive channel as he sharply whizzed a ball to Bernardo, who plucked it out of midair. Manuel Akanji was not even close to Ronaldo, so he had no chance of blocking his driven, near-post finish to see Portugal retake the lead in the 87th minute.

Ronaldo would claim his match ball ninety seconds later. With the wide center-backs pushed higher and wider in order to force a late equalizer, it made Xhaka’s sloppy first touch all the more costly. Ronaldo then ate Akanji alive on the break, after the Swiss defender tried to show him onto his left without actually getting close enough to prevent him from cutting in. Akanji paid for his mistakes, as he watched Ronaldo rifle the ball into the far corner, sealing Portugal’s place in the inaugural Nations League final. 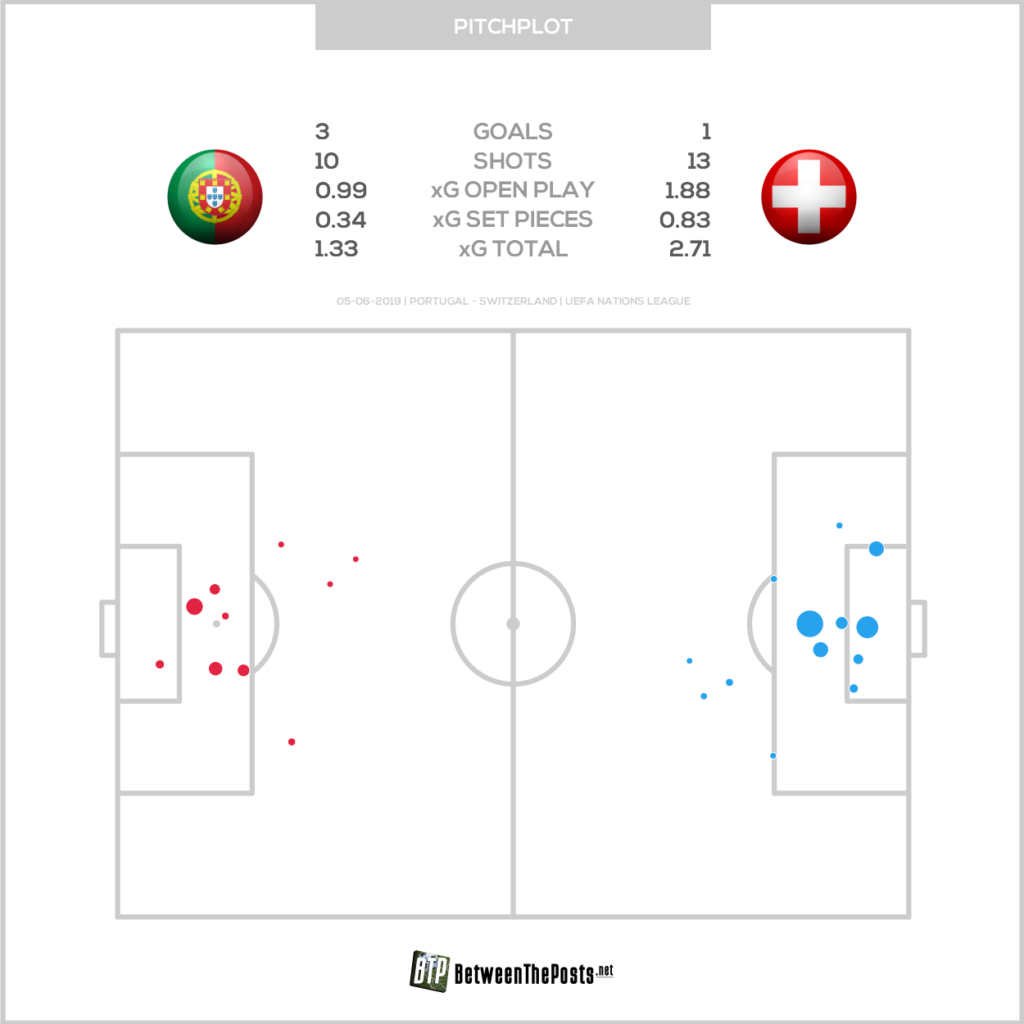 International knockout matches are cruel, and this was another example of that. Switzerland were the more impressive side for the majority of that match yet, in the end, it came down to Portugal not letting their lack of control phase them. Oh, and they had Ronaldo to help them through it too, might have helped. When we consider ‘process-over-result’ however, Switzerland are clearly doing some things right and are a national team to follow for the next couple of years.

Sunday waits for both these teams, with the Netherlands and England playing out the second semi-final tonight. 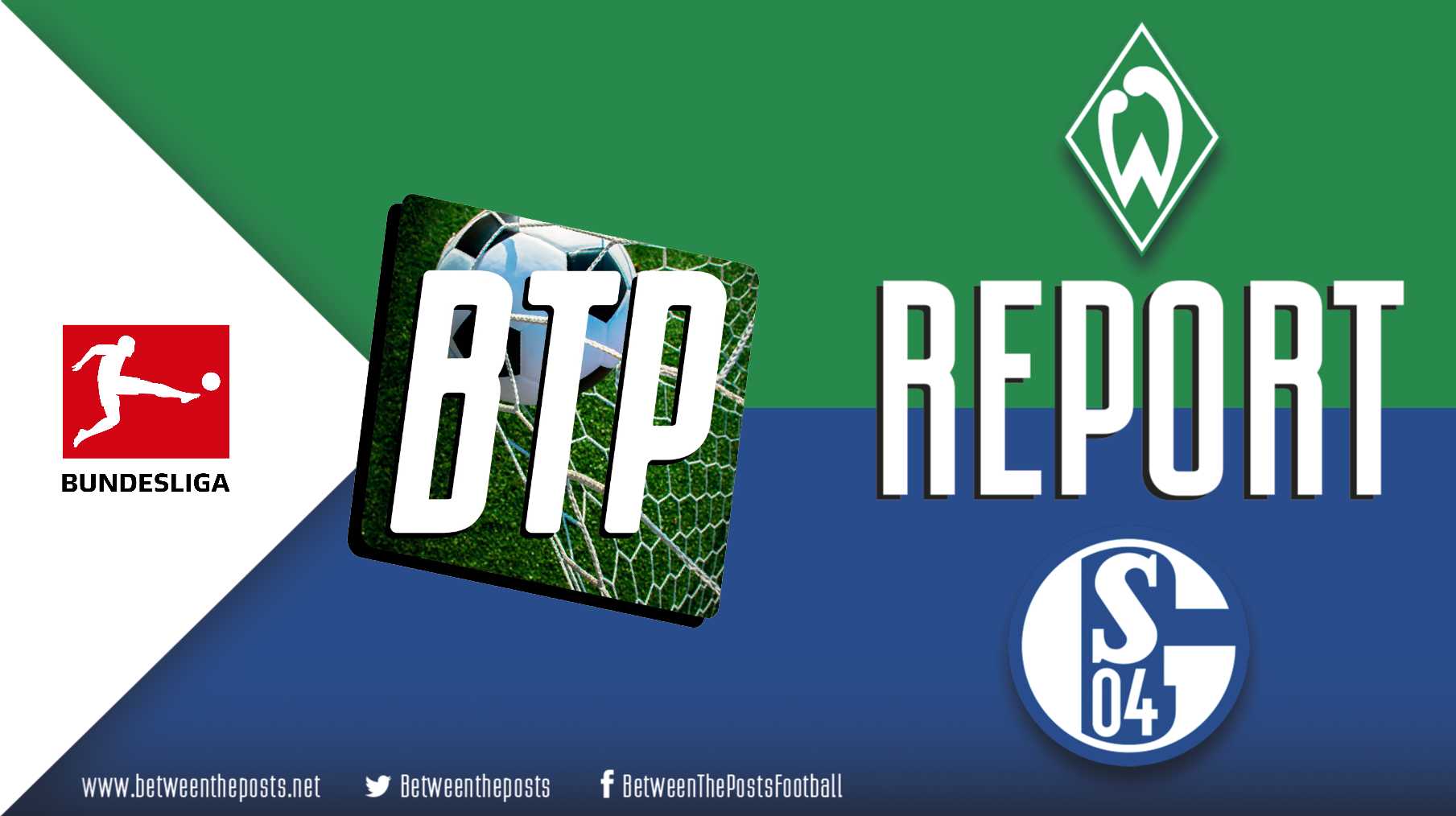