PSV successfully implemented a game plan with aggressive pressing and direct play towards their commanding striker Luuk de Jong, preventing Barcelona from controlling the game. This forced the Spanish champion into an uncomfortable high-tempo game, which exposed their problems when transitioning from attack to defense. However, trading punches against Lionel Messi often ends up badly…

PSV Eindhoven completely dominate the Dutch Eredivisie (13 wins in 13 games, averaging a little over 3,5 goals scored per game). However, Mark van Bommel’s side were completely outclassed so far in this season’s Champions League, a tough group consisting of Tottenham Hotspur, Internazionale, and Barcelona quickly throwing them to the last place of the table.

With little to lose, van Bommel decided to go all out against Barcelona and embraced a game plan that aimed to trade punches. His team featured the same starting eleven used last time against Barcelona, but with a different game plan and shape. They key difference being the position of striker Luuk de Jong, who played in a deeper role. This adjustment turned PSV’s shape into a 4-3-1-2 when pressing, a 4-4-2 when defending in a deep block A defensive block is the compact group of defenders that defends a particular zone, either their own half in a medium defensive block, or the zone around their own box in a deep defensive block. and a 4-2-2-2 in possession. Wingers Hirving Lozano and Steven Bergwijn would always be the most advanced forwards, waiting to pounce on the counter.

On the other hand, Barcelona struggles to dominate the craziest and most competitive LaLiga edition in over a decade, but they breezed through their tough Champions League group. With group leadership and qualification almost assured, coach Ernesto Valverde had an easier time dealing with his team’s current injury crisis, as Samuel Umtiti, Sergi Roberto, Rafinha, Arthur Melo, and Luis Suárez are all injured.

Against PSV, Valverde opted for his usual 4-3-3 shape, but with different names to replace all the injured players. Nelson Semedo and Clément Lenglet started for Sergi Roberto and Umtiti in defense, Arturo Vidal started in place of Arthur, while Messi went back to the good ol’ false nine position in the absence of Suárez, accompanied by Philippe Coutinho and Ousmane Dembélé on the wings.

Through an aggressive high press and direct play on Luuk de Jong, PSV aimed to enforce a fast, physical, high-tempo game that could exploit Barcelona’s chronic issues in defensive transition. It was a game plan that strongly resembled the one used by AS Roma to knock Barcelona out of the 17/18 Champions League quarterfinals.

To do this, PSV pressed in a curious 4-3-1-2 shape, with Luuk de Jong taking a surprisingly deep position. Bergwijn and Lozano would press the center-backs, while right back Denzel Dumfries and left midfielder Gastón Pereiro would mark the full backs. In the midfield battle, de Jong would press Busquets while central midfielders Pablo Rosario and Jorrit Hendrix marked Ivan Rakitić and Arturo Vidal. 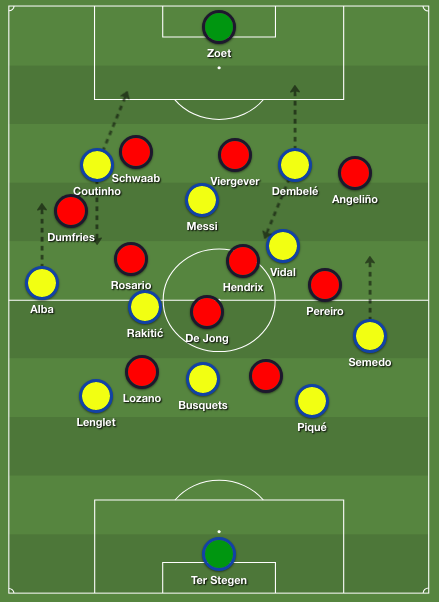 Barcelona’s 4-3-3 formation in possession against PSV’s 4-3-1-2 high pressing block, which became a 4-4-2 shape when PSV were defending on their own half.

To avoid being hounded by de Jong and to achieve numerical superiority in buildup, Busquets had to drop in between his center-backs. This forced Rakitić and Vidal to drop deeper as well, to maintain the ideal distances between the three midfielders. Despite their coherent movements, PSV’s aggressive pressing led to some turnovers before Barcelona’s players could even cross the halfway line. These turnovers were often taken advantage of by the fast and skillful Lozano and Bergwijn.

If Barcelona managed to break the pressing line, PSV would then shift into a 4-4-2 deep block, with De Jong dropping into the midfield four. During the first half he would often form a double pivot The two most defensive midfielders playing next to each other are often called a ‘double pivot’. with Hendrix – which is quite the unconventional approach by Van Bommel, given the fact De Jong is a striker by nature –  while Rosario and Pereiro moved to the wings. During the second half, De Jong would often be the one who covered the wings as well.

When in possession, PSV chose a simple but effective strategy. They bypassed Barcelona’s pressing game by sending the ball long to the immense Luuk de Jong, who spent the entire game winning aerial duels against Barcelona’s defenders (12 aerial duels won). PSV midfielders were ready to pick up the ensuing second balls and then send the ball into space for Bergwijn and Lozano.

During the initial half hour, PSV wildly succeeded at implementing this strategy, generating six shots, including a big chance, while Barcelona had only generated a single shot, outside the box.

Barcelona turns the tables with the movements of Coutinho and Dembelé

Barcelona’s defense struggles in high-tempo contexts like the one enforced by PSV, but attackers Coutinho and Dembelé love it when the spaces open up. Their movements were key in turning around the game in Barcelona’s favor.

Messi, Coutinho and Dembelé started to drop deeper into midfield zones to support their teammates. When Messi managed to link up with one of Coutinho or Dembelé, Barcelona was able to break PSV’s pressing line and exploit the spaces behind it. Between the 30th and 45th minutes of the game, Barcelona accumulated several fouls and shots against PSV this way.

Coutinho and Dembelé did not only drop deep, but also consistently moved into space and tried to pin PSV’s defenders. Coutinho lurked in the zone between PSV’s right back (Dumfries) and center-back (Schwaab), aiming to divide their attentions and give more time and spaces to teammate Jordi Alba, who was constantly guarded by Dumfries and Rosario. By pinning down and pushing back PSV defenders, Coutinho and Dembelé also generated more time and space for Messi to move into danger zones near the box and shoot.

PSV’s physical approach to the game of course also had a disadvantage: it is exhausting and near-impossible to implement for the full ninety minutes. Throughout the first twenty to twenty-five minutes of the second half, PSV opted for a more conservative 4-4-2 block which did not press as often as before. Barcelona were able to cross the halfway line more often and string some possessions in PSV territory.

By 60th minute, Messi was starting to take care of things himself. Instead of staying in his more advanced false nine position, he dropped deep more often, effectively becoming the third midfielder and receiving the ball directly from Busquets or Rakitić. To compensate, Vidal moved forward and constantly occupied the false nine position Messi had left vacant.

In the 61st minute, Messi had his game-breaking moment. After carrying the ball from the halfway line and brilliantly playing off Dembelé to get into the box, Messi dribbled and let loose an impossible shot in between three PSV defenders and the keeper. 0-1 to Barcelona, because no tactic can defend against that.

Soon after, in the 70th minute, Messi would show that his luck that night was as great as his skill, as he mishit a free kick that casually found its way to Piqué, who slotted it into PSV’s goal. While many viewers originally believed Messi had done this free kick on purpose, the Argentine later admitted in the post-match interview that he mishit it. 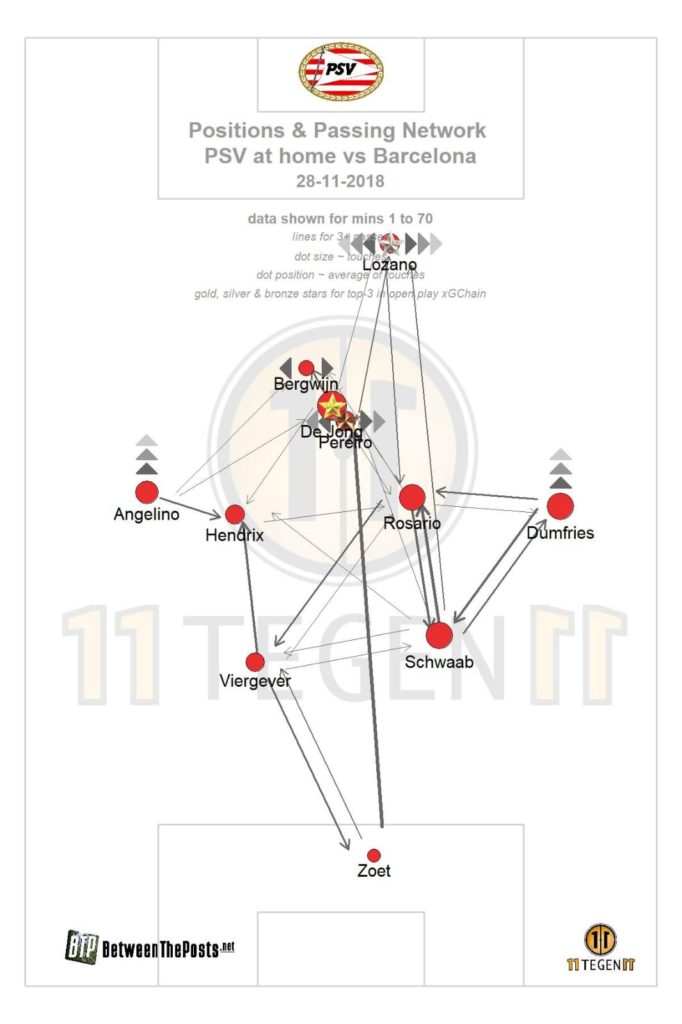 PSV reacts and brings back the high press

Immediately after Piqué’s goal, van Bommel gave his team much-needed fresh legs by replacing Pereiro and Hendrix for Donyell Malen and Erick Gutiérrez. This allowed PSV to press with a similar intensity as before, and thus revive the ‘pressing plus direct play’ game plan described earlier. To add even more intensity in attacking and pressing, van Bommel also replaced a tired Bergwijn for Maxi Romero in the 79th minute.

The final twenty minutes saw PSV completely dominate Barcelona, very similar in nature to the one that occurred in the first thirty minutes of the game. Barcelona was asphyxiated by PSV’s pressing, Busquets along with the rest of midfield had to drop deep and barely crossed the halfway line. PSV produced a grand total of 10 (!) shots in these final minutes – including two big chances – against Barcelona’s two shots. One of those big chances turned into a well-deserved goal for De Jong, who once again towered over the Barcelona defense and headed a pinpoint cross from Angeliño. The siege against Barcelona lasted all the way to the final whistle, but PSV was not able to get the goal that would tie the game.

Despite this defeat, PSV can come out of this game with their head held up high. For more than fifty minutes in total, PSV implemented a game plan of high pressing and direct play with great passion and intelligence and thus dominated none other than the Spanish champion, one of the strongest teams in Europe. And this was achieved in no small part due to an immense Luuk de Jong, who executed his part (pressing, aerial duels, defensive discipline) to perfection.

While Barcelona was not at full strength in this game, there is some reason to worry. With Messi on their side, the Champions League title is always a possibility. However, the way they lost control against PSV harks back to that forgettable April night in Rome, and shows that Barcelona can still suffer greatly against strong opponents that force them into a physical, high-tempo game. As noted by analyst Albert Morén, Barcelona’s ability to slow down and control games seems to suffer in the absence of Arthur. That says a lot about the quality of the young Brazilian midfielder, but also about the squad and tactical deficits that have led Barcelona to rely on him so heavily. 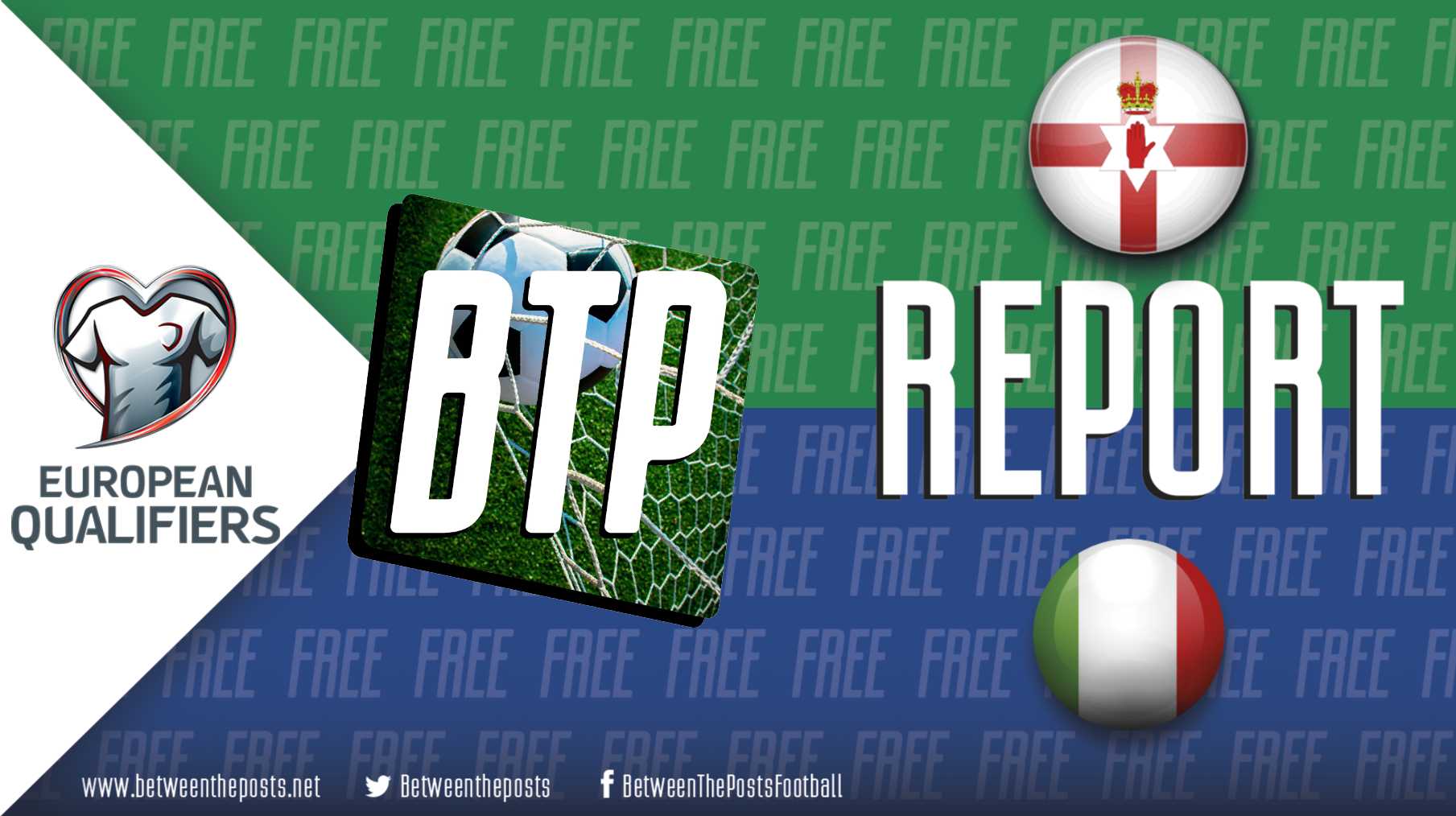 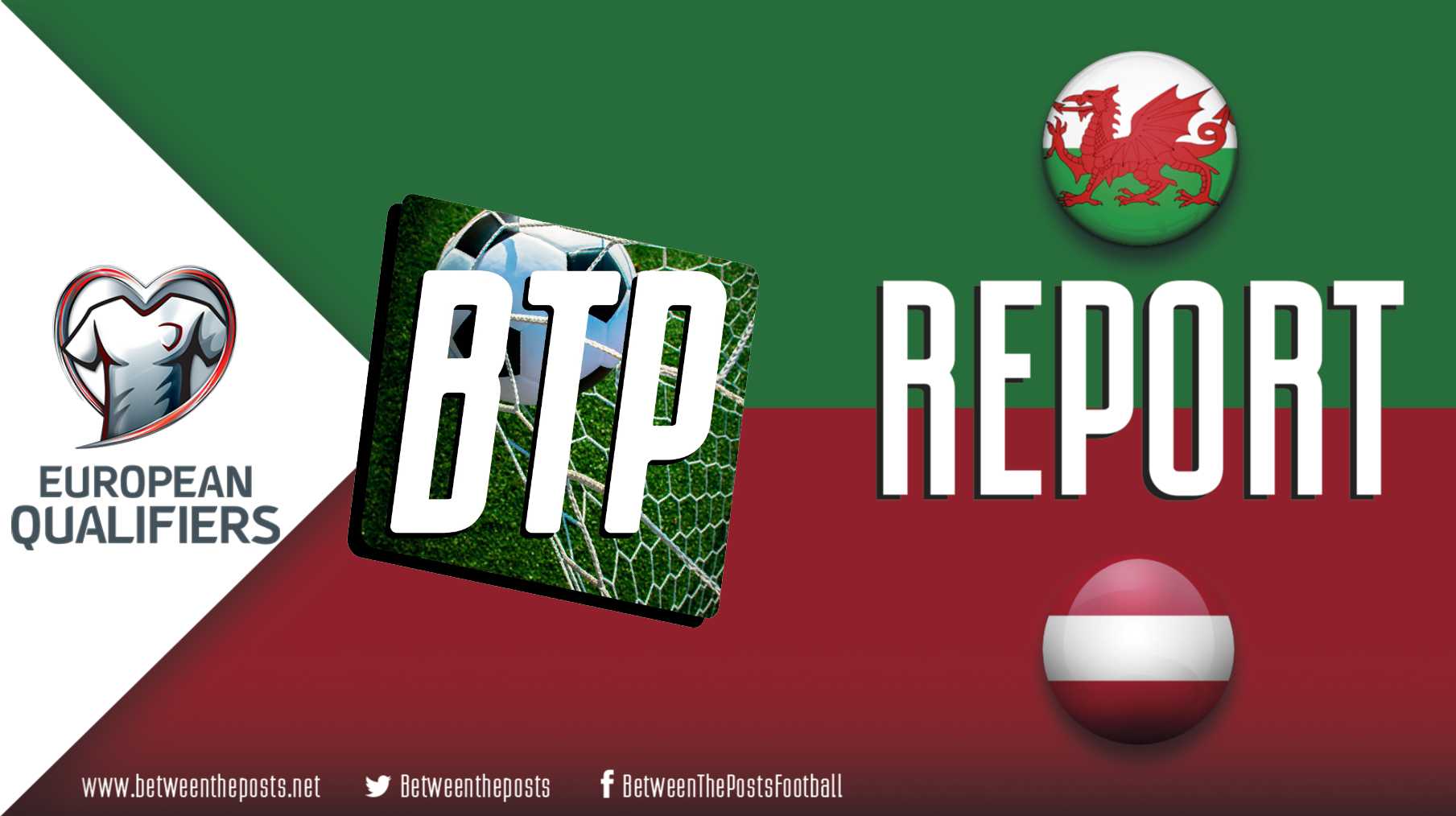