The disappointment of falling short in the Europa League was quickly cast aside as RB Leipzig put Augsburg away without breaking a sweat. While Christopher Nkunku scored twice, it was wingback Nordi Mukiele who was the star, a sign that bodes well for Domenico Tedesco ahead of the cup final against Freiburg.

Expectations were high for Leipzig in Europe following the elimination of heavyweights Barcelona and Atalanta, but their meek effort resulted in a disappointing defeat to Scottish outfit Rangers. However, there is opportunity still for Domenico Tedesco in the form of the DfB Pokal, preceding which was the more pressing concern of securing Champions League football for next season.

Leipzig made a handful of changes from the side that lost to Rangers, as Péter Gulácsi was protected by a defense of Marcel Halstenberg, Lukas Klostermann and Willi Orbán. Nordi Mukiele and Benjamin Henrichs were the wingbacks with Laimer partneing Kavin Kampl in midfield. André Silva led the line, with Emil Forsberg and Christopher Nkunku on either side of the Portuguese forward.

Augsburg have had an uneven campaign, occupying the same position in the table as they did at the end of last season. Currently, they are five points clear of Stuttgart in 18th and should be able to avoid a relegation fight towards the end of the season. They lined up in what was on paper a 3-4-3 shape, with Jeffrey Gouweleeuw, Reece Oxford and Ohis Felix Uduokhai making up the defense. Niklas Dorsch and Carlos Gruezo made up the midfield, flanked by wingbacks Lasse Günther and Daniel Caligiuri on either side. Mads Pedersen and Michael Gregoritsch supported Florian Niederlechner, who led the line for the visitors.

While reports listed Augsburg as playing a 3-4-3 formation, it seldom worked out that way in practice. Instead, Augsburg’s schemes varied depending on whether they were in or out of possession, with the idea behind each shape being quite evident. 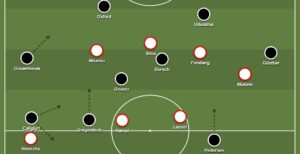 Wingback Daniel Caligiuri’s position and the options available when Augsburg were in possession.

In possession, Augsburg showed a four-man defense, with right sided center-back Jeffrey Gouweleeuw moving wider in an ‘elbow back’ role. Often, a member of the double pivot would drop into the backline, reorganizing the defense into a three-man line.

In any case, this initial setup saw wingback Daniel Caligiuri take up a more advanced position, from where he had the flexibility to play on the outside or come inside. In sequences where the Augsburg double pivot needed support, forward Michael Gregoritsch often dropped from his position in the frontline. This saw Caligiuri rotate and continue to occupy the Leipzig center-back so as to impose sustained pressure on the backline and create space between the lines. Alternatively, Caligiuri himself came inside behind Kevin Kampl, once again to act as a passing outlet in midfield.

Another intriguing aspect of Augsburg was the number of players they retained in buildup – including the double pivot, as many as six players were involved in the first phase. This seemed strategic, as Leipzig often opted to match the numbers by pushing one of the wingbacks forward. This created some space behind the midfield, and Augsburg tried to exploit this by dropping their forwards which was intended to drag Leipzig defenders out of the backline. This created channels for the likes of Mads Pedersen and Florian Niederlechner to run into, though Leipzig often defended well on these occasions. There were very few occasions where Leipzig were truly beaten in behind, which helped them sufficiently mute the Augsburg threat.

Player profiles often dictate how teams play, and that was certainly the case for Leipzig in the game. When they have Angeliño on the pitch, we see Leipzig tilt the field to help Christopher Nkunku gel with the Spanish wingback, given Angeliño’s crossing and cutback proficiency. When he is not used, Leipzig lean on something different – in this case, making optimal usage of right wingback Nordi Mukiele.

Mukiele is often used in a defensive role, where his recovery pace is relied on to clean up the space in behind à la Kyle Walker at Manchester City. However, this game saw Tedesco use him in a slightly different way.

#RBLeipzig: free + find the 3rd man
Pass was initially made to Laimer (circled) in poor position; passed back to Klostermann who passes it to Kampl (whose scan fixes defender). Laimer sneaks forward to receive Kampl's pass and shifts it on to Mukiele ahead on the wing @GeirJordet pic.twitter.com/YJdYQqekjW

As is customary for Leipzig, Konrad Laimer often split out wide, with Mukiele ahead of him on the shoulder of opposing wingback Lasse Günther. With Emil Forsberg and André Silva tying up the nearest defenders, this left Günther on an island against the speedy Mukiele whenever the wingback received the ball. Laimer was also an effective participant in wall passes which saw Mukiele dart off Günther’s shoulder to get in behind and get to the ball.

Augsburg defended in a hybrid 4-3-3/5-2-3 shape – since Leipzig were focused on attacking down Augsburg’s left flank, their right wingback Caligiuri often moved up to join the midfield. With him sitting in the right halfspace, Niklas Dorsch could then try to contest for the ball against Laimer. Given the frequency with which Leipzig vacated the midfield, most of the first half was played on the flanks. A Bundesliga graphic noted that 47% of Leipzig’s attacks came down their right wing, an illustration of how much Tedesco had tiled the field.

Augsburg’s changes cause their downfall

Augsburg made a change to begin the second half after Arne Maier replaced Carlos Gruezo. Following the change, the shape resembled something of a 5-1-4 structure, where Dorsch was the primary central midfielder while Maier and Pedersen supported Gregoritsch and Niederlechner in attack. Elbow back Gumny moved into a more traditional wide center-back role, as Augsburg seemingly aimed to push Leipzig back by swarming their defenders and benefit from runs in behind (and create a structure for immediate and effective counterpressing). However, their high line meant that Leipzig had space in behind, and Mukiele continued his key role from the first half.

47th minute: Forsberg and Silva switch positions before the former backheels a pass into Mukiele’s path. Another instance of Leipzig setting up the play for Mukiele whose pass leads to an easy finish for Nkunku.

The second goal came from a rotation where Forsberg moved outside and backheeled a pass into Mukiele, who had burst up the halfspace for a seam run. From there, it was simple to lay off the pass to Nkunku. The second goal came about after a quick attack where Laimer chipped the ball in behind, and Mukiele caught Ohis Felix Uduokhai cold with his run in behind. The wingback’s influence was apparent for both goals and capped off a stellar evening for himself and fellow Frenchman Nkunku. Rather than aid the offense, manager Markus Weinzierl’s changes had the effect of exposing gaps in midfield, which Leipzig were able to exploit enroute to a crushing 4-0 victory. 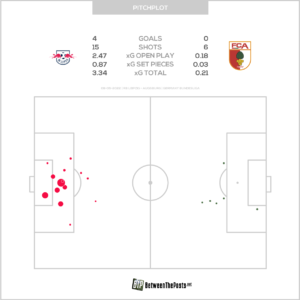 The main event for Leipzig this season is the cup final, which precedes one of the most consequential windows for the team. Tedesco has proven his bona fides as a manager and stabilized the team, but it remains to be seen if he can commandeer a title challenge out of the current personnel. The task becomes more complicated if integral members like Nkunku and Laimer are moved, which is likely to be the case given that the former wants be prove himself in the Premier League and Bayern Munich has eyes on the latter. With Borussia Dortmund retooling under Marco Rose after losing Erling Haaland, next season may represent the opening of a title window – if Leipzig are brave enough to act on what is needed.