If you play Bayern Munich and the game is fifty-fifty, you have to score your chances. Leipzig did not. As a result, despite the fact this was an even match for large spells, they were forced to watch Bayern win the DFB Pokal.

In a time where domestic cups and league titles mean less and less for the elite, it is hard not to root for the underdog in cup finals like these. Even when Leipzig are by no means a small club. Our model even suggests they might have been the second best team in Germany this season, ahead of Dortmund, but that is a tale for another day. Yet Leipzig’s turnover is dwarfed by that of Bayern, which went well over 600 million euros for the 2017/18 season.

In addition to serving as an example of the growing financial inequality in European football, this cup final was littered with other storylines. It was the last game for majestic wingers Arjen Robben and Franck Ribéry, who put in a combined 22 seasons at Bayern. It might have been the last professional game Ralf Rangnick ever coached, as he will take up his nominal position of technical director again after the summer, with Julian Nagelsmann coming in as manager. And it was also the third final in succession for Bayern manager Niko Kovač, who reached the final twice with Eintracht Frankfurt, winning one and losing one. He came into this game having won 16 of 17 matches coached in the cup.

Even though Leipzig have featured their fair share of formations with three center-backs this season, Rangnick lined Leipzig up in their famous 4-2-2-2 shape for this cup final, which was played on neutral ground in Berlin. Péter Gulácsi in goal, aided by the usual defense of Lukas Klostermann, Willi Orban, Ibrahima Konaté and Marcel Halstenberg. Tyler Adams joined Kevin Kampl in midfield, while Marcel Sabitzer and Emil Forsberg took up the inside winger positions, supportive of the striking duo Timo Werner and Yussuf Poulsen.

To win back-to-back cups, Kovač went with what has become his standard formation: a 4-2-3-1 shape with Manuel Neuer – deemed fit enough to play – in goal, defended by Joshua Kimmich, Niklas Süle, Mats Hummels and David Alaba. In the double pivot 4-2-3-1 is one of the most frequently occurring formations in football. The two most defensive midfielders are called a ‘double pivot’. Thiago was accompanied by Javi Martínez. Just behind Robert Lewandowski, the trio Kingsley Coman, Thomas Müller and Serge Gnabry was fielded. No surprises, no tactical nuances, just a very fit and able team oozing with individual quality from back to front.

Leipzig on the front foot

Even though 3-5-2 has been the most prominent choice of formation for Rangnick this season, he has not fielded it once against Bayern Munich, on two separate occasions. Apparently unhappy with certain tactical elements that come with it, Rangnick has deployed 4-1-3-2, 4-4-2 diamond and 4-2-3-1 formations in the Bundesliga encounters against the Bavarians. This led to two tight matches, wherein Bayern had more possession of the ball, slightly better chances and came away with four points in total. 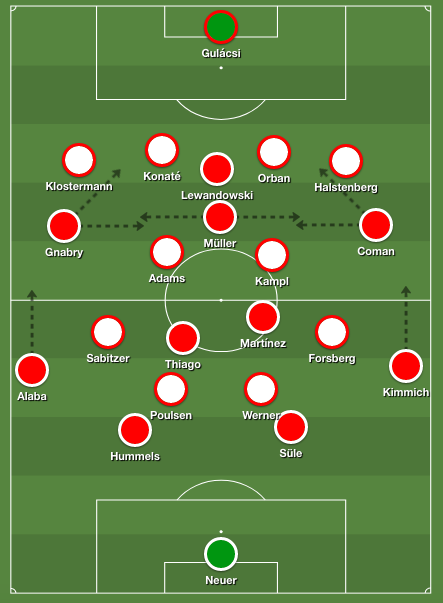 For this match, Leipzig’s most famous system was brought to the stage. Off the ball, the four most offensive players attempt to completely block off the center, meaning the ball is forced out wide. Whenever the opposing central midfielders do attempt to get on the ball centrally, the holding midfielders apply aggressive pressure on the ball-carrier.

This worked to a tee in the opening stage of the match. Even though Bayern had more possession, the game was largely played on Bayern’s half, or in the middle third If you divide the pitch in three horizontal zones, the middle third is the most central area. of the field. Leipzig’s pressing often resulted in Bayern circulating the ball for five or six passes, progressing it further up the field, but seldomly penetrating Leipzig.

On the other hand, Leipzig did not create a lot from open play, despite forcing some interesting ball recoveries in the middle third of the pitch. One of those resulted in a shot for Poulsen on the edge of the box in the seventeenth minute, but that is about as close as Leipzig got from scoring from open play.

Their biggest chance of the first half came from a corner kick. In the tenth minute, Poulsen was on the end of a beautifully delivery by Halstenberg. Only a superb save by Neuer prevented the opening goal from going in. In the 25th minute, Bayern recorded their first genuine opportunity of the match, as Müller was able to go in behind Leipzig’s defense unopposed. Despite a five-yard head start, he was caught by the likes of Adams, Orban and Konaté and the chance went to dust.

The deadlock was broken by Lewandowski in the 28th minute. One of the few times Bayern was able to manufacture a Bayern-under-Kovač attack, as the winger dribbled inside, the fullback (Alaba) overlapped and put it in a cross. An awkward cross though, not worthy of a goal, but Bayern happen to have the best pure number nine in the world on their roster, making things easier sometimes.

With a majestical athletic effort, Lewandowski stooped, bent his entire body and headed in the opening goal of the match. After going up, there was more room to play in, even though it might also have been a case of fatigue creeping up with Leipzig. Martínez, but most notably Thiago, were able to turn forward a lot more following the opening goal, meaning Leipzig were forced into a low block A low block refers to a team that retreats deep in their own half out of possession, generally only disrupting their opponents around their own box. more often. 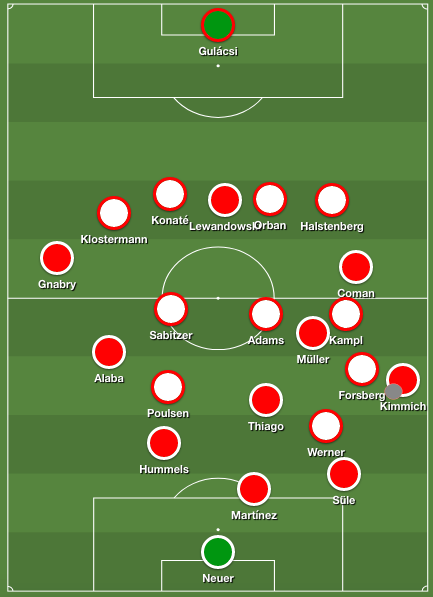 Thiago gets on the ball here and is able to turn forward, starting a Bayern attack. 33rd minute.

This is also supported by the passing stats. From minute one until twenty-three, Bayern attempted 133 passes, completing 99. Counting from minute twenty-three until half-time, the pass count went significantly up, as they attempted 165 passes and completed 131.

Second half starts with a blast

The second half got a cracking start, as befit a cup final. Bayern set up a shot for Thiago within the first minute of play, which was placed over the bar by the Spanish Brazilian. Two minutes later, Leipzig got their biggest open play chance of the match. Picking up a second ball, the towering center-back and birthday boy Konaté muscled himself past two Bayern players before playing an outrageous thirty yard through ball for Forsberg, who found himself one-on-one with Neuer. His second touch was just a bit too heavy, meaning Neuer was able to close the angle and save the ball with his left leg.

At Between the Posts, we repeatedly say that small details can decide matches, but missing a one-versus-one in a cup final being one goal down is not a detail. It can be counted as a huge miss for Leipzig and one of the reasons they lost this match. Two minutes later, Werner missed another big chance, this time from a Halstenberg cross, meaning Leipzig had created more opportunities from open play in the first three minutes of the second half than they had done in the entire first half.

Apparently not too negative about what he had seen in the first half, Rangnick did not make any changes to formation nor personnel. Leipzig pressed a tad more aggressive and attempted to play more short passes through midfield than going direct, as Sabitzer dropped deeper into midfield than he had done in the first half. It should also be noted that there is not always a direct explanation when a game is set on fire out of nowhere.

An end-to-end open match ensued, as both teams generated good penalty area action. In the 54th minute, Gnabry got a shot from five yards out, in the 55th minute Lewandowski was on the end of a counterattack only to fire wide and in the 56th minute a shot by Werner was cleared off the line by Süle. 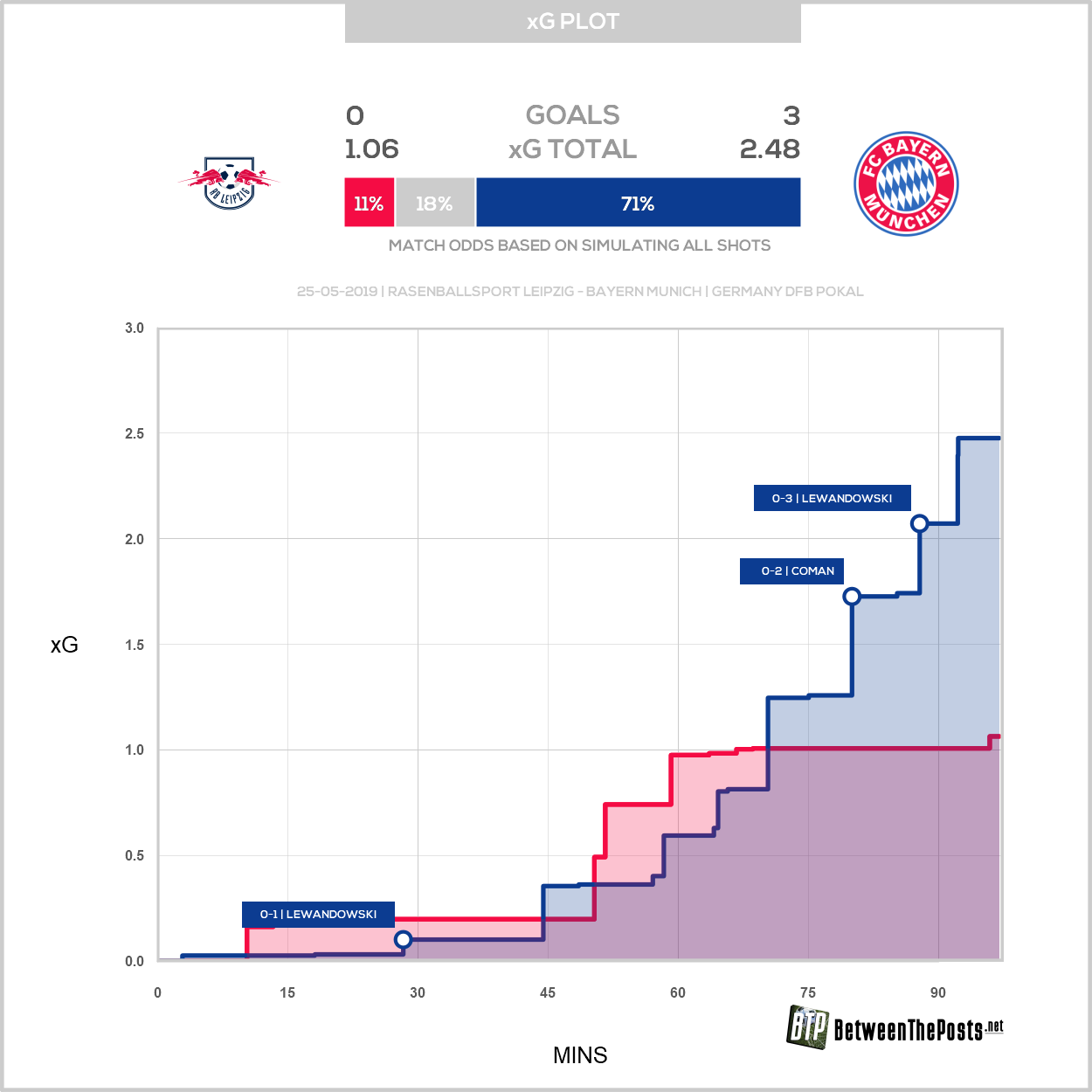 After 250 minutes of football – 180 in the league and 70 in this cup final – Rangnick finally turned to the 3-5-2 formation against Bayern Munich. Konrad Laimer, who was brought on for Tyler Adams minutes earlier, went on to play as right back, Lukas Klostermann became the right center-back, while Upamecano came on for Orban to play as left central defender. 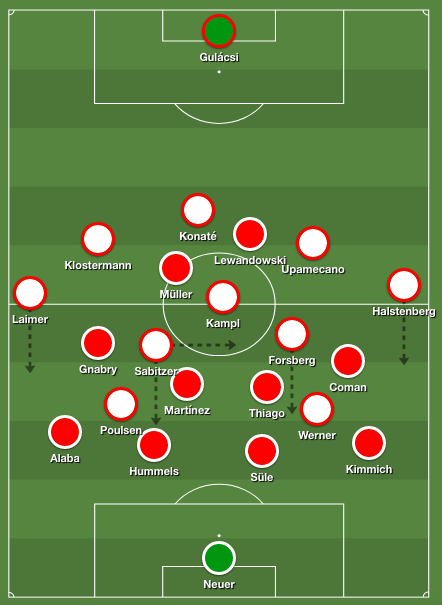 Since Leipzig pressure the opposing fullback with their wing-backs in this formation, perhaps Rangnick’s biggest concern had been how in this setup, the defense can be left three-versus-three with center-backs who do not possess the raw pace to deal with either Gnabry or Coman.

The game was not affected by the formation switch, as Bayern put the lid on the game with two fantastic goals. Twelve minutes before the final whistle, Coman beautifully picked up the ball from the air with a fake shot, darting to his left foot and finishing in the top corner. A few minutes later, Robert Lewandowski expertly chipped the goalkeeper after a wonderful counterattack, effectively sealing the game.

With the game decided, the onus shifted to the departing Robben and Ribéry, who both came on as substitutes in the final ten minutes of play. Albeit quite uninfluential in this particular game, it was heartwarming to see them leave the club they served for so long with a prize, both fit and on the pitch. 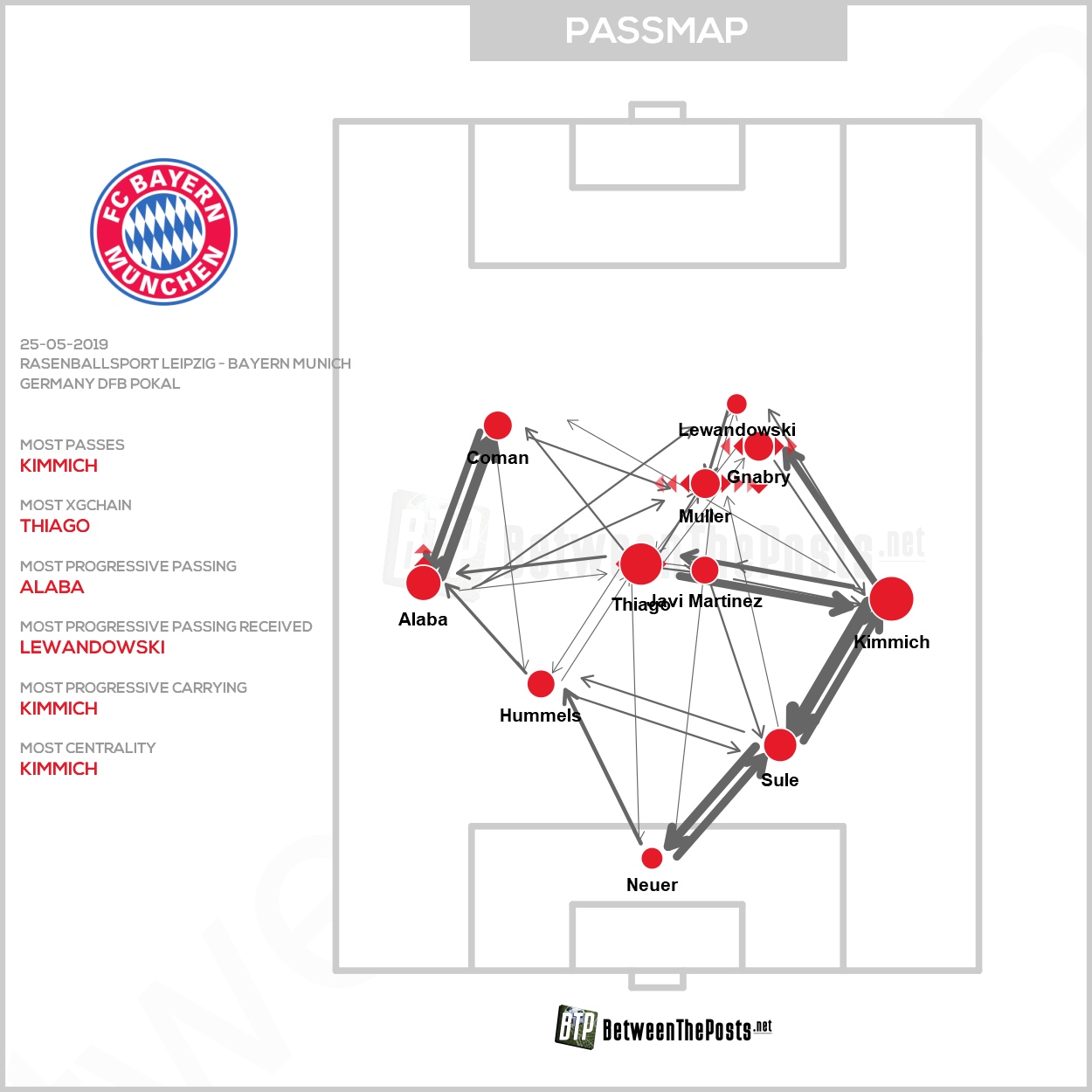 A harsh result for Leipzig, all in all. The opening thirty minutes of the match and the first twenty minutes of the second half were evenly matched, which is probably about as good as it gets against a Bayern side as dominant as this one. Even though the match was more open in the second half and Bayern had their chances too, that still does not negate the fact Leipzig could have easily scored the opener or an equalizer.

Leipzig should easily be able to challenge Dortmund for second place next season, as they already have elite defensive numbers and the biggest coaching talent in Germany coming in to lead the team. If anything, the Bundesliga needs a club that can consistently challenge Bayern Munich for the title. For the sake of competitiveness, let’s hope Leipzig can already be that club next season. 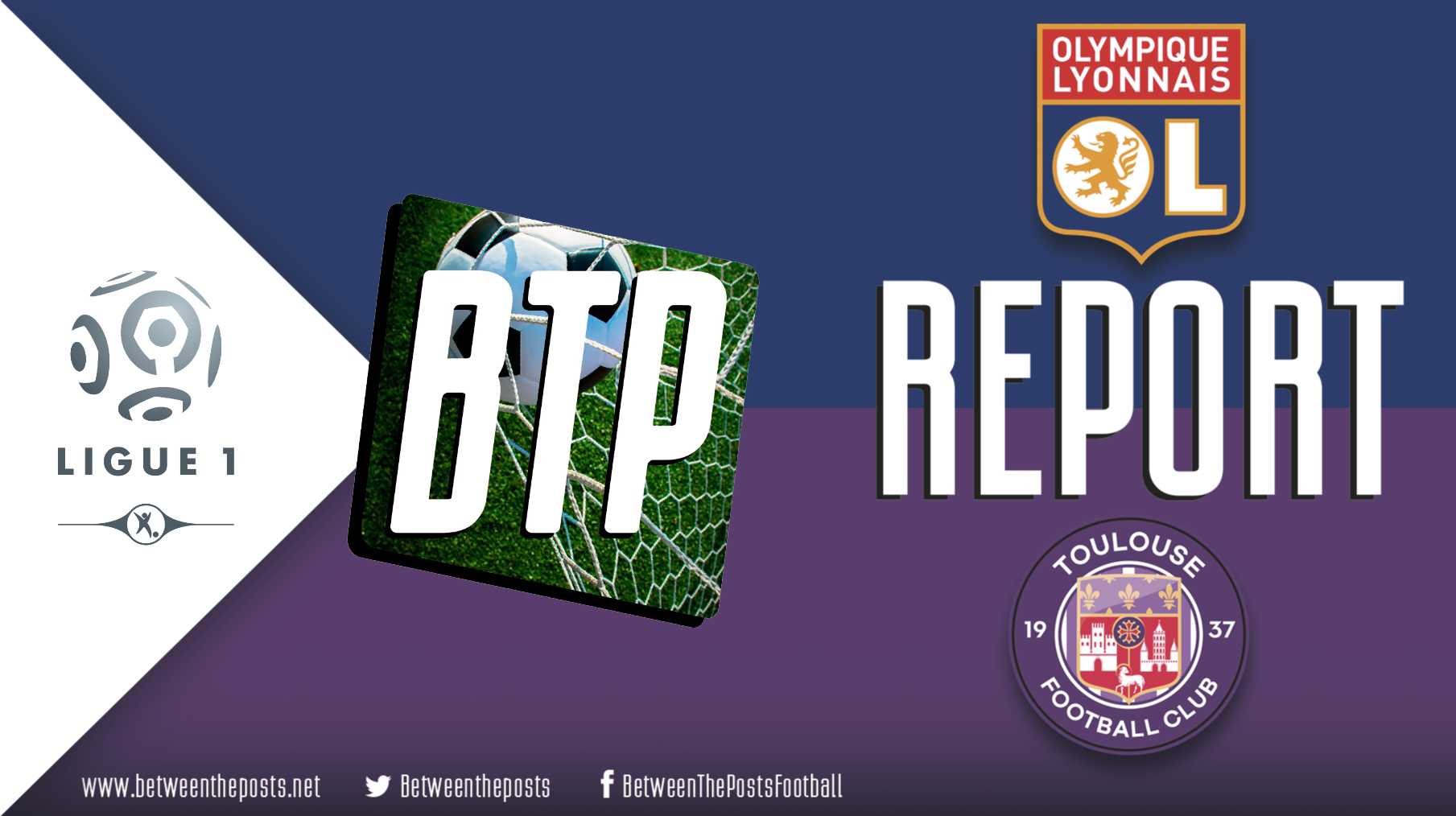 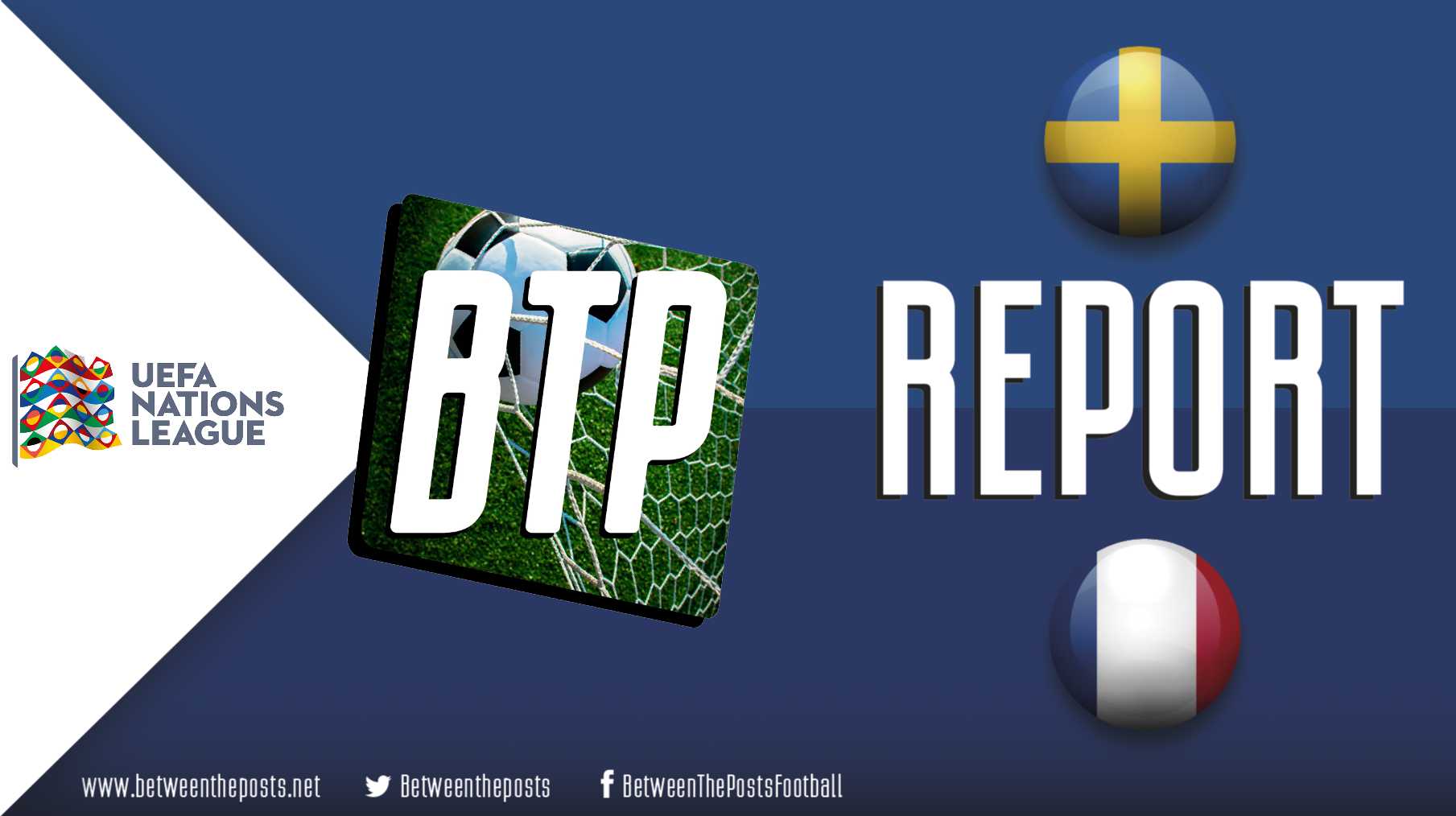