The Bundesliga returned from its winter break with a top-of-the-table clash between leaders Bayern Munich and third-placed Leipzig. Usually, matches of this sort in Germany tend to be exciting end-to-end affairs, but that was not the case on this occasion. That was down to some tactical decisions, as well as the fact that the teams were likely not up to full speed.

RB Leipzig’s Rückrunde was a tale of two halves in itself. Domenico Tedesco could not preserve the momentum his side built up in the second half of the last season, and was swiftly replaced by Marco Rose. The ex-Dortmund manager got things clicking pretty quickly, which is why Leipzig ended 2022 on a run of six straight victories and thirteen matches unbeaten in all competitions.

Except for the managerial change, Bayern’s first half of the season was relatively similar, albeit not to the same degree as Leipzig, who were struggling to stay in the top half of the table early on. Bayern, on the other hand, were disappointed to not be at the very top of the standings, but a ten-match winning run in all competitions meant they ended the year in that position, having also won their Champions League group.

Leipzig lined up in a 4-2-3-1 formation. Péter Gulácsi will remain unavailable for the foreseeable future, so Janis Blaswich started in goal again behind Mohamed Simakan, Willi Orbán, World Cup starlet Joško Gvardiol and Marcel Halstenberg. Bayern-bound Konrad Laimer partnered Xaver Schlager in midfield with Emil Forsberg ahead of them, Dominik Szoboszlai and Dani Olmo were on the wings, and André Silva started up top in the injury-enforced absence of Christopher Nkunku.

Bayern Munich stuck to their 4-2-3-1 formation on paper. Winter signing Yann Sommer made his debut in goal, replacing the injured Manuel Neuer who will be out for the season after his skiing accident. Benjamin Pavard, Dayot Upamecano, Matthijs de Ligt and Alphonso Davies made up the back line, with Joshua Kimmich and Leon Goretzka ahead of them in midfield. Jamal Musiala started in the number ten position, Leroy Sané and Serge Gnabry were deployed on the flanks, and Eric Maxim Choupo-Moting led the line.

Leipzig, and indeed all the Red Bull franchise clubs, have built an identity over the years with their high-octane pressing and intense style of play out of possession. However, since the arrival of Rose, Leipzig seem to have shifted away from that a little. Therefore, they are not even among the Bundesliga’s top five teams in the Buildup Disruption Rate metric.

It was easy to see why that is the case in this match. The home side were set up in a medium block out of possession with their line of engagement just on the edge of the final third. Their shape can be described as a 4-2-3-1/4-2-2-2, as Forsberg stood ahead of Kimmich (who seemed to operate as more of a lone number six in possession) and the wingers positioned themselves narrow but ready to close down the opposition fullbacks, who were relatively quite deep. 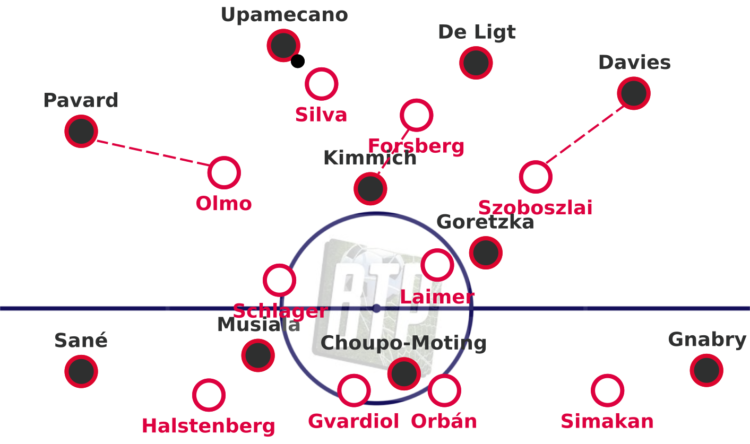 This relatively conservative defensive approach contributed to the caginess of the match, but it did work for Leipzig as they were able to restrict their opponents to just seven shots attempted.

Bayern build on the right and break down the left

Another factor that slightly turned down the entertainment factor of this match was Bayern’s approach in possession. They have been very fun to watch this season thanks to the fluidity of their front four after the departure of Robert Lewandowski in the summer, but they reverted to a much more positionally rigid system in this game.

As previously alluded to, Kimmich operated as more of a lone number six in possession as Goretzka pushed forward in the left halfspace, with Musiala dropping into the right halfspace. In the buildup and progression phases, the fullbacks were quite deep, and even when they got forward in the opposition half, they seemed to move into more central positions and were very reluctant to make overlapping runs. 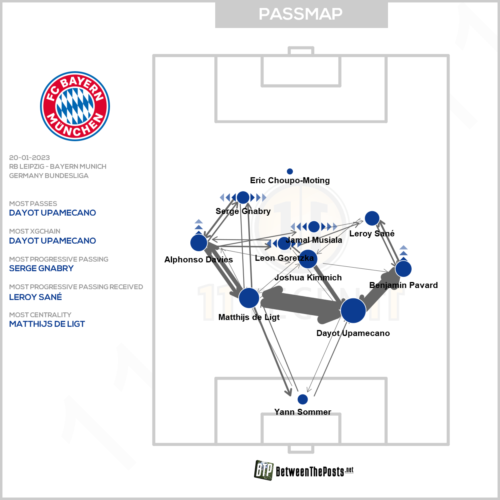 Bayern’s passmap quite clearly shows the execution of these patterns.

Especially in the first half, Bayern’s attacks seemed to follow a pretty set pattern. Pavard would drop alongside the center-backs to receive the ball and pull Olmo forward, after which Bayern would look to access the gaps in midfield. Often with help from Sané and Musiala, they would then try to break through Leipzig’s lines, before looking to switch the angle of attack to the left flank, which would have a good amount of open space.

It was precisely that space which led to the creation of the opening goal.

Bayern slip up in the second half

Having taken a one-nil lead into the half-time break after keeping close to two-thirds of possession in the first half, one would expect Bayern to see out the win with relative comfort in the next forty-five minutes. However, they failed to do so and only managed to come away with a point.

About seven minutes into the second period, the defending champions conceded an uncharacteristically sloppy equalizer after failing to properly clear their lines and struggling to deal with the ball in the box.

At this point, just seven shots had been attempted altogether in the match, so it had been a very close affair. As both sides searched for a potential winning goal thereafter, we did see more attempts (ten to be precise), but none of note in terms of chance quality. Both defensive blocks held firm and neither side seemed willing to risk too much in way of attack, so ultimately a draw was the fair result. 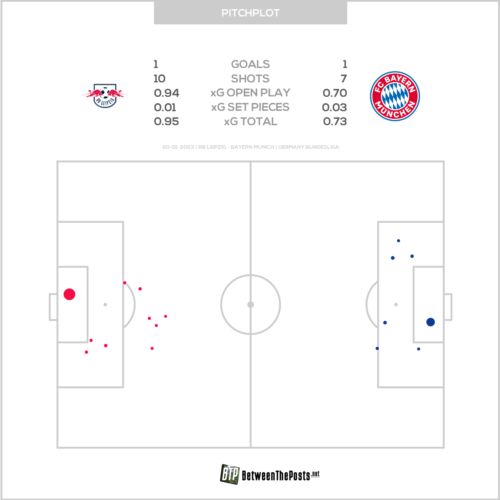 Leipzig did lose their six-match winning streak in all competitions, but they should be fairly content with this result. They clearly seemed second-best in the first half, so they did well to fight back in the second period. Their chances of challenging Bayern for the title remain slender, but they are still just about within touching distance of the leaders with a six-point gap.

Looking at Bayern, their tactical setup was perhaps more intriguing than the result. As discussed, they used a much more positionally rigid system possession in this match, so it will be interesting to see if they continue to do so. It is quite likely, however, that this was a one-off for this fixture, where its purpose was to limit Leipzig’s counterattacking opportunities. 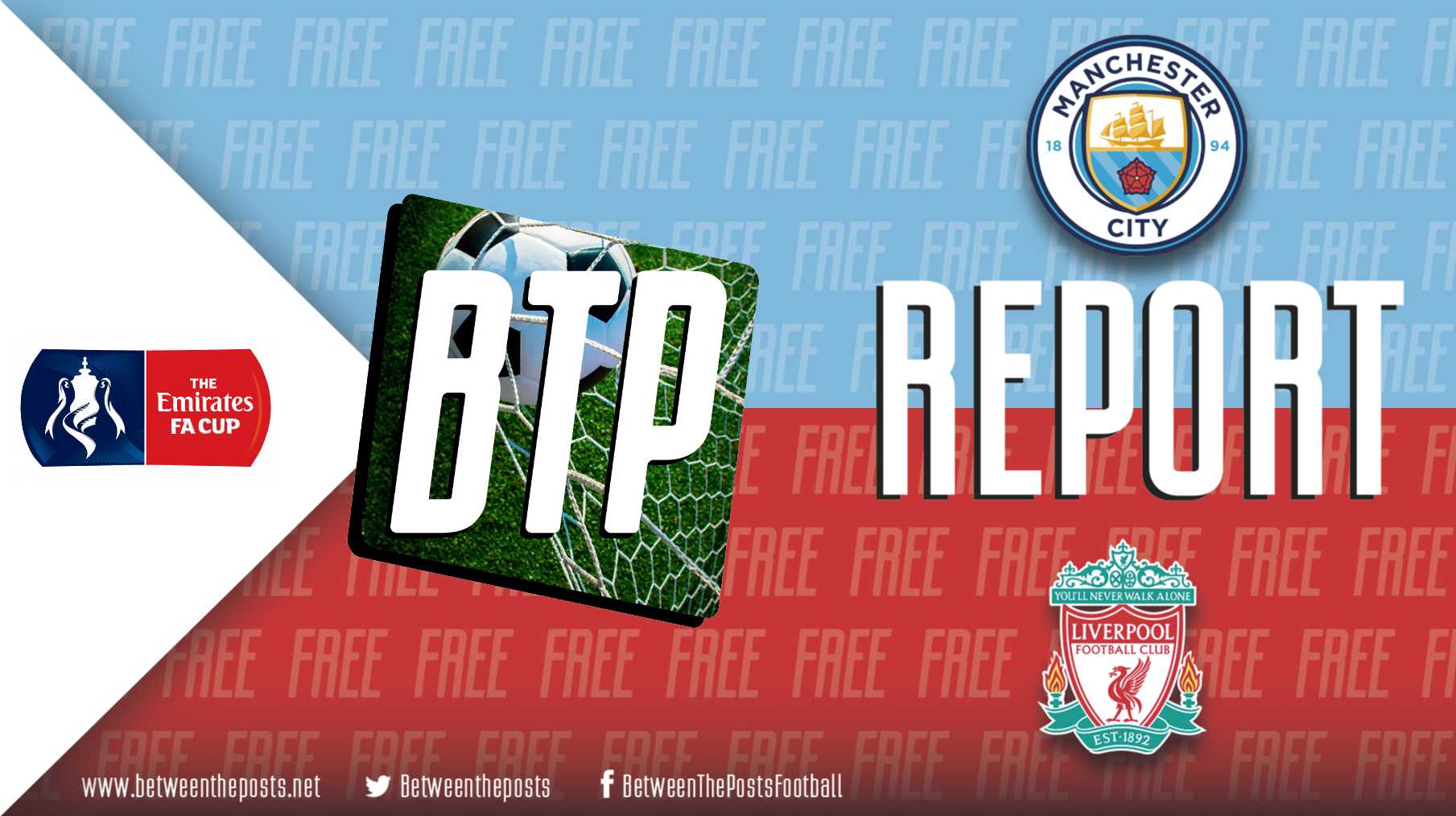 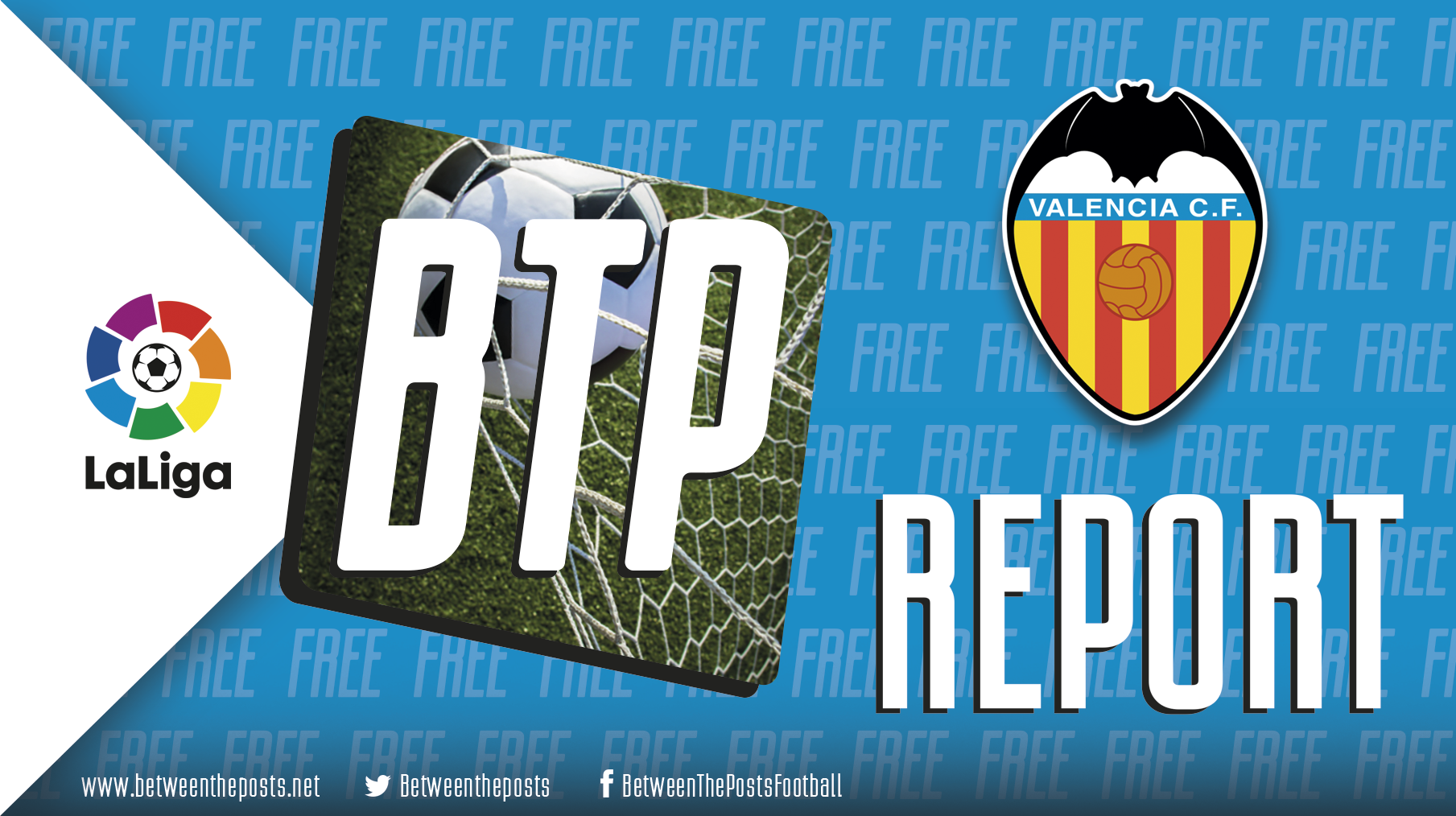