In a match where both teams ran themselves into the ground; where both sides never gave each other a moment’s rest; where both teams managed to direct and suffocate wide play, it was Dortmund’s dynamism in transition-based attacks that were the decisive factors and granted them a win.

Despite Leipzig’s last competitive match falling just short of a month ago now, Rangnick only felt the need to make one change from the side that beat SV Werder Bremen 3-2 on the final day on the Hinrunde. In for Willi Orban at center-back was Dayot Upamecano.

Lucien Favre’s hand was forced to a larger extent in the changes he had to make for this encounter. Julian Weigl was still required to fill in at center-back, this time pairing up with Abdou Diallo, and not Ömer Toprak. Whilst the midfield remained the same, a knock to Marco Reus made him a doubt not worth risking, so in stepped Maximilian Philipp for Dortmund’s star man. The other change up top saw Mario Götze reprise his role at number nine instead of Paco Alcácer.

This season, Leipzig are all about pressing triggers  A pressing trigger is a specific pass or movement by the opponent that draws out a coordinated team press. in the middle of the park. In their 4-3-3 formation, one of the triggers revolved around Dortmund’s holding midfielders. Whenever Axel Witsel or Thomas Delaney received the ball, that would be the cue for either Kevin Kampl or Konrad Laimer to step up and apply instant pressure. The lone man up top – Yussuf Poulsen – would look to follow the path of the ball and shut off play to one side whenever he could.

The problem Leipzig had, was the ease at which Dortmund managed to recycle possession as a consequence of this. The midfielders only pushed up when there was a trigger, leaving one striker to press two or three players at a time. With so much time and space to work with, the visitors managed to manipulate this to their advantage.

Dortmund’s main objective was to get their attackers on the ball in the halfspaces. If you divide the field in five vertical lanes, the halfspaces are the lanes that are not on the wing and not in the center. Because there is no touchline like on the wing, players have freedom to go everywhere. But this zone often is not as well-defended as the very center. This makes it a very valuable offensive zone to play in and a lot of chances are created by passes or dribbles from the halfspace.They tried to open up the channels between Leipzig’s wide midfielders and central midfielders on either side.

In their attempts to achieve this, their center-backs exchanged square passes with the holding midfielders. Since Demme would sometimes be too deep to contribute in pressing Dortmund’s midfielders that had moved into a completely central position, one of the other midfielders would then be required to push onto them. As a result, this opened a gap between them and the winger on that side, allowing Dortmund to quickly cycle it back and then through to the attacker. 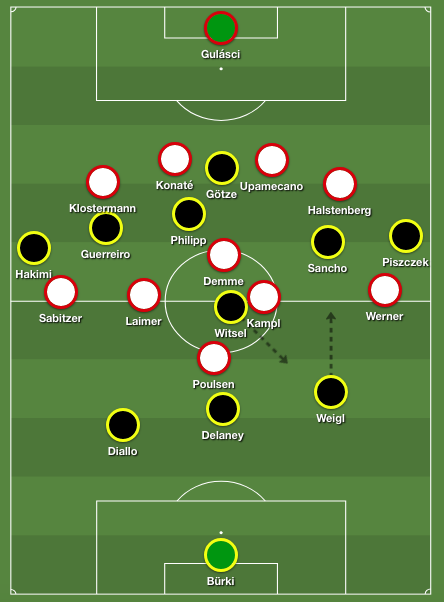 An illustration of Dortmund’s attempts to draw open the halfspace.

By having the center-backs carry the ball out and engage a midfielder in a duel, they found another way to open a passing lane into the attacker. Once Dortmund found these attackers, they would progress the ball further out on the flanks with Götze coming to join. Without any box target, it made it significantly more difficult to create chances using the space they had worked open in transition. However, by working it side-to-side, they did forge some dangerous openings. In the thirteenth minute, they executed this move and then worked it back across from left to right before drilling in an early cross that so nearly found the foot of Philipp at the near-post.

To try and patch up the holes in their defense, Rangnick quickly opted to change back to Leipzig’s more traditional 4-2-2-2 formation. Although the halfspaces were arguably more exposed, Leipzig were closing down the ball and getting nearer to each Dortmund individual at a much faster rate.

Overload to underload works fine for the visitors

The simple method of working it from side-to-side continued to reap its rewards in the buildup to the opening goal. Throughout the entire match, goal kicks and throw-ins were an invitation for Dortmund to draw as many players to one side as possible. After it was taken, one of the attackers would attempt to lay it back to a supporting player, who would then immediately shift it across. On the left, Achraf Hakimi was a great outlet as his rapid overlapping When a wide player, most of the times a wing-back, runs outside to fill in the space left by a winger going inside with or without the ball, this is called overlapping. runs allowed him to tear up ground with the ball and get Dortmund into Leipzig’s box within an instant.

In the eighteenth minute, this same attacking strategy earned the away side a corner through Lukas Klostermann’s last-ditch tackle. Against Leipzig’s zonal-marking system, Łukas Piszczek pipped Upamecano to a header thanks in part to the momentum he gathered in his run towards the ball. The flick-on, intentional or not, fell to the back post at the feet of Witsel who, astoundingly, struck it back across goal into the top left corner in off the bar. 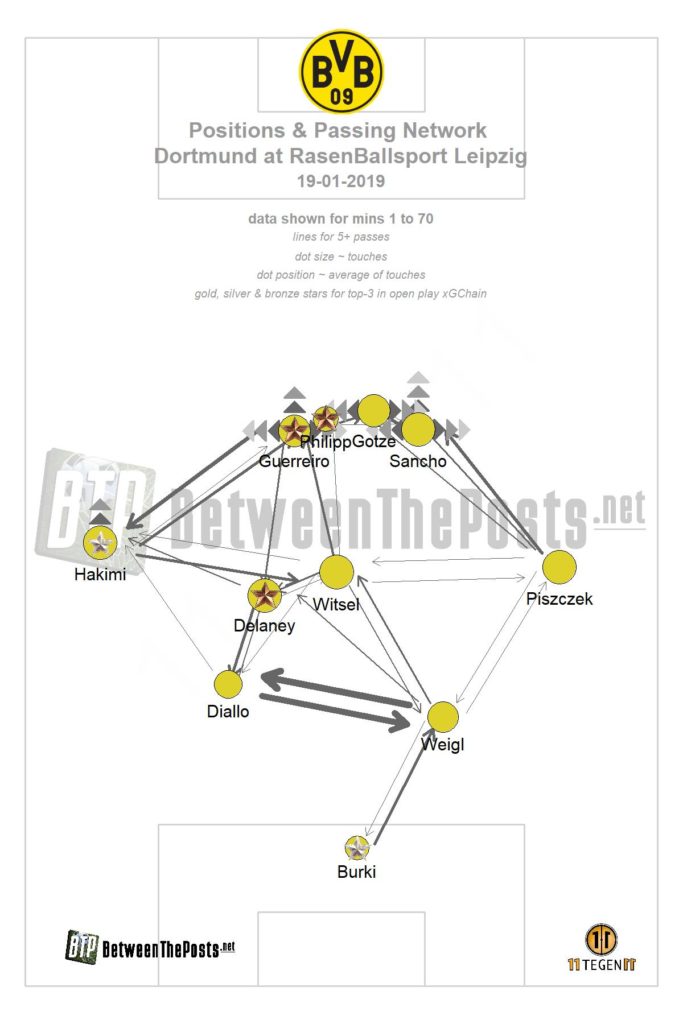 Following the lead Dortmund took, the emphasis to attack was then very much on the home side. Favre’s side played in a strict 4-4-2 defensively, as they have done all season. However, what made their efforts to press particularly more effective was the work of their center-forwards. At every given opportunity, Götze and Philipp would aggressively harry the ball back towards their goal. With so many bodies tightening the space to attack in, there was no breathing room for any of the opposition attackers.

As for Leipzig’s approach, which was predominantly left-sided in the first half, they displayed a very one-sided shape that undoubtedly narrowed their chances of success. The double pivot of Kampl and Demme would angle themselves towards the ball side – alternating based on which side the ball was on. One would occupy a central position whilst the other occupied a fullback position – with the actual full-back pushing on as a winger – in hope of drawing a wide midfielder onto them. Subsequently, this could help to open the channel inside, meaning they could play the ball to the inside attacker and then outnumber their fullback. 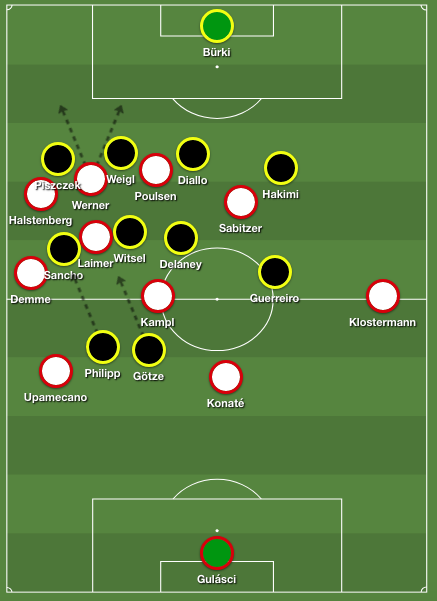 Throughout the first half, it was completely hopeless against the visitor’s compact block. Leipzig could barely work it back across to the far side. There was simply no space to operate in or to play into. Every attempt at a direct ball into a central attacker had to be so precise that it often resulted in shoddy execution, with overpowered passes and ensuing poor touches that gifted possession back to Favre’s side.

Just about the only bit of good news from this was that Dortmund had no way out. Leipzig’s counterpress was generally very impressive, as you might expect from a side coached by Rangnick. Without any attackers left up the field to provide some instant relief, Leipzig continued to gnaw away at the visitors.

A more open second half gives hope to the home side

After a very bitty opening ten minutes, which saw the ball barely touch the ground as it pinballed its ways in and around the midfield, Dortmund were first to create the next opening. Directly from this, the ball fell kindly for Delaney who quickly pushed it onto Götze as the away side suddenly sprung a lethal attack. Philipp latched onto the next pass and went clean through on goal, but his low, driven effort was denied by Péter Gulásci.

Eventually, Leipzig were working it into the channels successfully, as they game begun to stretch itself out. However, they still continuously came up bust, as the visitors persisted to crowd out the attackers on the flanks and block any attempts to put the ball in the box. The home side’s forwards needed to deliver balls in much earlier if they wanted to exploit any of the openings they were manufacturing.

Rangnick’s side did have one more trick up their sleeve though. In response to Dortmund’s repeated ‘goal kick method’, the manager pushed Marcel Sabitzer up next to Poulsen and Werner. With Marcel Halstenberg’s aerial advantage over Götze, he was able to win the duel and head it forwards towards Poulsen. The striker’s first-time layoff into Werner would then sprung Leipzig into attack. The German’s slide ball across into Sabitzer gave the home side a glorious chance to equalize late on. Unfortunately, the Austrian fell short of expectations with his tame, first-time effort heading straight at the Swiss goalkeeper.

In what was really a game of fine margins, Dortmund did, in the end, deservedly open their Rückrunde with a victory over Ralf Rangnick’s side. This meant they completed a league double over Leipzig for the first time, and subsequently maintained their six-point lead at the top of the Bundesliga.

It was not the start to 2019 Rangnick would have been hoping for but his team will likely still hold a top four position until next weekend where they can look to bounce back away at Fortuna Düsseldorf 95. 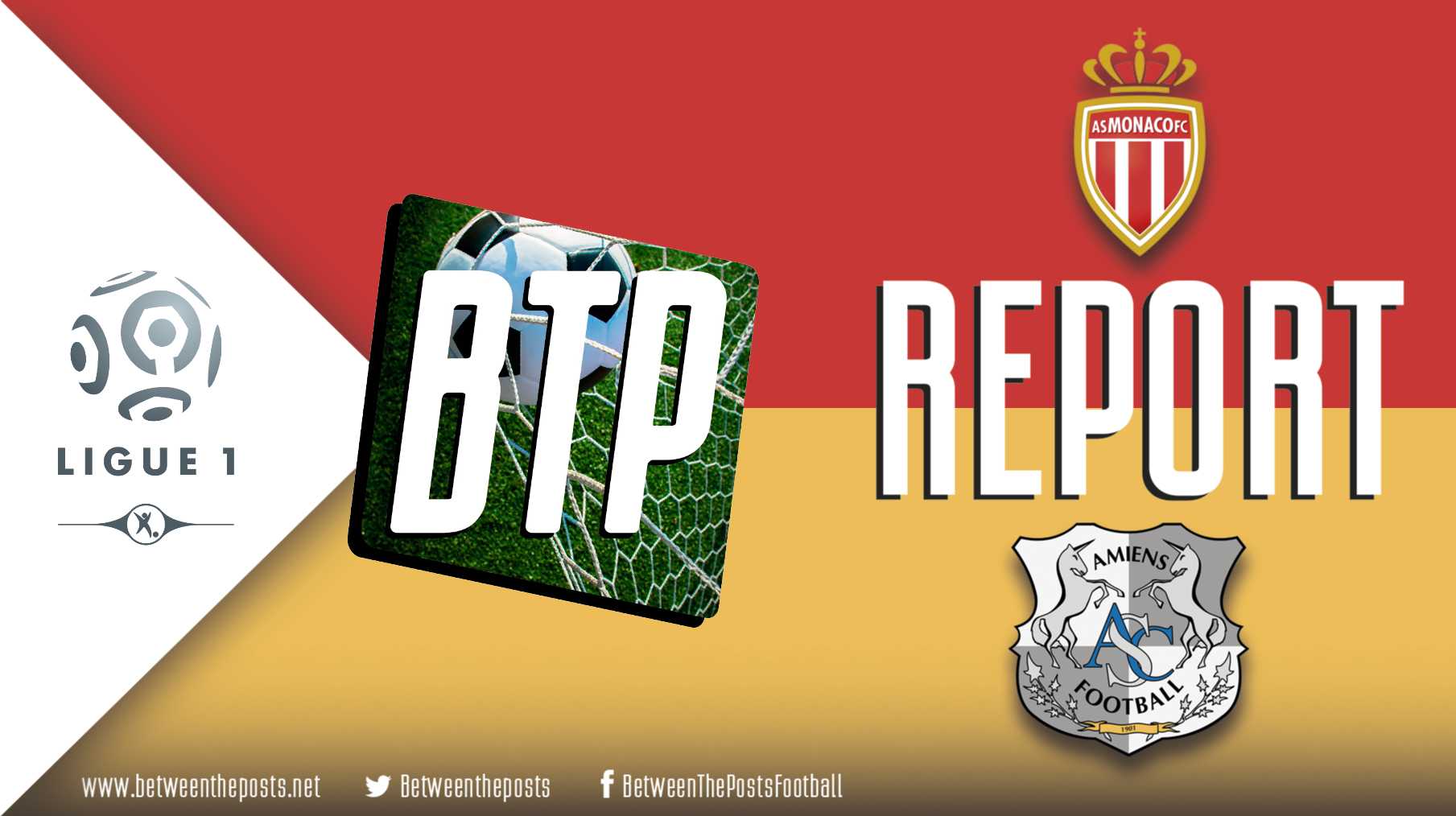 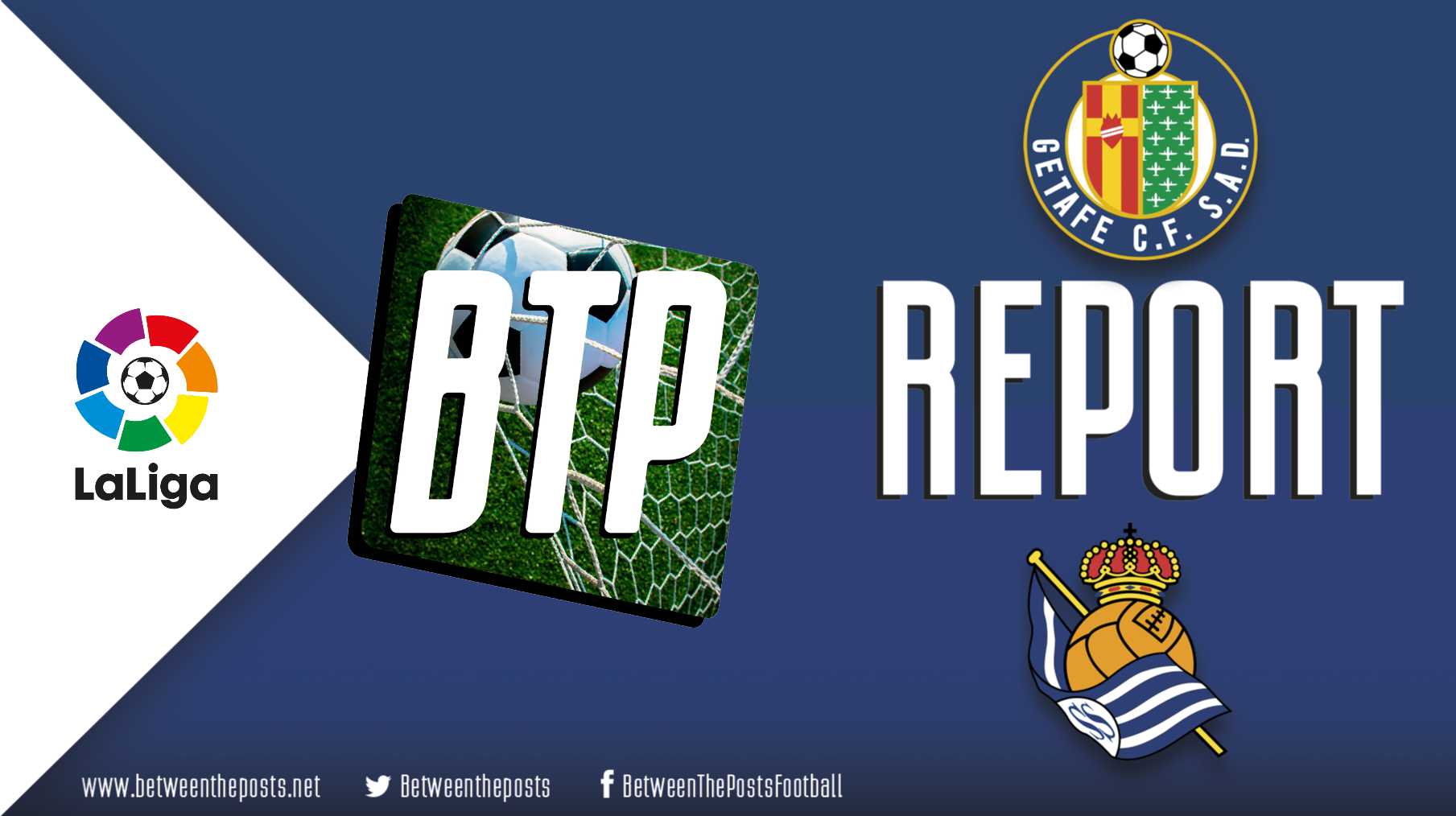