Leipzig took up a relatively passive defensive scheme which helped PSG to take the initiative from the start. PSG’s own possession play was strong, as they were able to outplay Leipzig in deeper areas and find suitable roles for the front three. PSG were 2-0 up by half-time, and the more aggressive setup taken by Leipzig in the second half was too little too late, as PSG added a third goal to kill the game off before the hour.

This Champions League semi-final clash saw a matchup between two of Europe’s brightest and most innovative coaches in the shape of Julian Nagelsmann and Thomas Tuchel. Nagelmann’s Leipzig side put in a controlled performance in their victory against a passive Atlético Madrid side to get to this stage. Meanwhile Tuchel’s PSG left it late against Atalanta, with Neymar almost single-handedly carrying the attack until Kylian Mbappé’s introduction in the second half gave him some much-needed help.

Leipzig made one change from the side which beat Atlético last time out, as Nordi Mukiele came in for Marcel Halstenberg, playing on the right of the defense alongside Lukas Klostermann and the impressive Dayot Upamecano, with Angeliño on the left. Kevin Kampl, Marcel Sabitzer and Dani Olmo were the central midfielders in their 4-1-4-1 shape against the ball, with Konrad Laimer on the right of midfield, Christopher Nkunku on the left and Yussuf Poulsen as the lone striker.

For PSG, there was a more dangerous looking front line to start the game this time, as Mbappé started this time around and was also joined by Ángel Di María, who completed the front three alongside Neymar. Behind them, Leandro Paredes was also given a start alongside Ander Herrera and Marquinhos in the midfield of their 4-3-3 shape. The negative for PSG was that they were missing first choice goalkeeper Keylor Navas, although on the other hand they were slightly boosted by the return of Marco Verratti as an option off the bench.

The pattern of the first half was already established from the early minutes of the game, as PSG took control of the ball and Leipzig sat in a 4-1-4-1 shape in their own half. Leipzig were fairly passive here, and any sporadic pressing was usually dealt with suitably by PSG, who enjoyed around 70% possession.

PSG’s 4-3-3 shape was somewhat asymmetric in how it was interpreted in possession. Paredes as the left central midfielder played deep, often dropping off to the side of Kimpembe to almost form a back three. 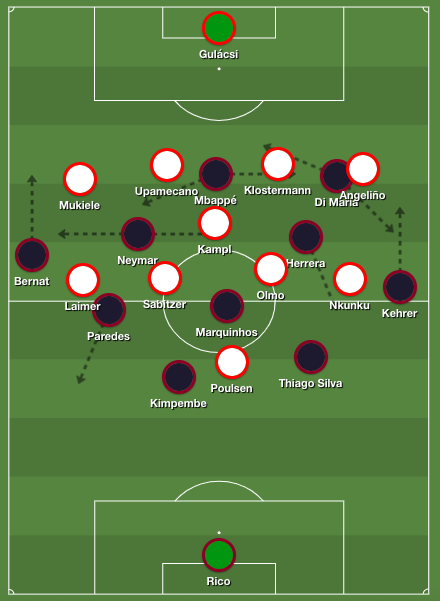 Marquinhos then stayed in the number six space, while Herrera on the right pushed slightly higher, getting himself between the lines on plenty of occasions. Herrera was involved in some rotations on the right with Thilo Kehrer and Di María. Kehrer tended to stay fairly wide but slightly deeper than Juan Bernat on the other side. Meanwhile Di María drifted between wider positions and positions in the right halfspace, If you divide the field in five vertical lanes, the halfspaces are the lanes that are not on the wing and not in the center. Because there is no touchline like on the wing, players have the freedom to go everywhere. But this zone often is not as well-defended as the very center. This makes it a very valuable offensive zone to play in and a lot of chances are created by passes or dribbles from the halfspace. as well as occasionally dropping deeper on the wing to receive and look inside with the ball on his stronger left foot.

Naturally, a key player for PSG was Neymar, and the attacking system allowed him to play in zones where he can thrive. With Mbappé coming infield to challenge the defensive line and offer depth, as well as the buildup being handled suitably by Marquinhos, Paredes and the center-backs, Neymar had a lot of freedom, starting from a position in the left halfspace, between the lines.

The deeper positioning of Paredes in the left halfspace was useful here, as his presence could help to draw out Sabitzer, which increased the space for Neymar in the pocket behind him. When the Leipzig central midfielders did push out in this manner, the PSG buildup was usually able to outplay them.

The opening goal for PSG arrived just after ten minutes. In this case it was from a set-piece, as Di María whipped in a dangerous wide free-kick which was headed in by Marquinhos. Leipzig did not react strongly to the goal and PSG were largely dominant throughout the half. Just before the break, Di María added PSG’s second goal, assisted by a wonderful flick from Neymar following a buildup mistake by Leipzig in their own half.

Nagelsmann’s adjustments unable to save the game

The first adjustments from Nagelsmann actually came just before half-time, as Olmo started pushing slightly higher into the number ten position during pressing. However, there were more drastic changes at half-time, as Olmo and Nkunku were removed in favour of Emil Forsberg and Patrick Schick. 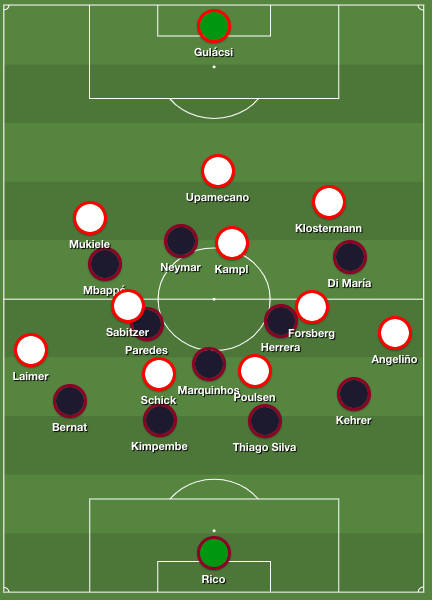 Leipzig in possession after double substitution.

Leipzig were already using a back three in possession in their rare spells on the ball in the first half as Mukiele tucked in to become a third center-back. In the second half the use of three center-backs was extended to Leipzig’s play without the ball, as they deployed a 5-3-2 shape in pressing.

They were now trying to press PSG much higher up the pitch, putting pressure on PSG’s center-backs having barely done so in the first half. The wing-backs Laimer and Angeliño tried to engage higher up the pitch, and the central midfielders had a three-versus-three situation against PSG’s midfield.

The change in strategy was effective in helping Leipzig get more into the game. However, its potential was cut short as they conceded a third goal ten minutes after half-time, which effectively killed the game off. It was scored by Bernat, after Mukiele went to ground and lost the ball deep in the Leipzig half.

As well as their control of possession in the first half, PSG’s defensive scheme throughout the game was fairly effective. They looked to press Leipzig high up the pitch with their front three up against Leipzig’s front three, making it difficult for Leipzig to gain control of the game through circulation along the backline. The likes of Herrera and Paredes also got tight to Leipzig’s midfielders, making it risky for Leipzig to try to play into the second line of buildup.

That’s one way to play out from the back against PSG’s front three. If you lose the ball here, you’re dead. No pressure! pic.twitter.com/9TQzgSgMHa

When PSG got pushed deeper, the midfield three did well to protect the space in front of the defense. In this respect, they make a good counterbalance to the front three despite the perceived lack of creative ability in the midfield, as they all possess good defensive instincts. Di María also dropped back as the fourth midfielder on many occasions, while Neymar and Mbappé tended to stay higher up.

There were continuing personnel tweaks from Nagelsmann as the half went on, but the game was mostly beyond saving at this point. Halsenberg was introduced into the back three, while Tyler Adams replaced Kampl, and there was also a late cameo for Willi Orban.

As for Tuchel, he left his substitutes until quite late despite the result already being fairly secure with half an hour left, perhaps attempting to give this combination of players more time to build chemistry with each other on the pitch ahead of the final. Eventually, Julian Draxler, Marco Verratti, Eric Maxim Choupo-Moting and Pablo Sarabia made late appearances in place of Herrera, Paredes, Mbappé and Di María respectively. This all did not lead to any more excitement in terms of goals scored, meaning PSG progressed to the final.

WE ARE IN THE FINAL OF THE @ChampionsLeague!

Leipzig could perhaps be criticized for coming into the game with too much passivity against the ball in their 4-1-4-1 shape, which made it easier for PSG to control proceedings. However, the gap in player quality also needs to be considered rather than only looking at coaching decisions, and PSG had a front three available with enough talent to make the difference against almost any setup. Reaching the Champions League semi-finals can still be seen as a good achievement for Nagelsmann in his first season at the club.

For PSG it was an effective system with and without the ball, and most importantly it put their front three in positions where they could affect the game. Presumably Tuchel will stick with a similar system in the final, in which case it will be interesting to see how they react to a team like Bayern Munich who, if they reached the final, would likely set up with a much less passive defensive scheme than Leipzig did in this match. 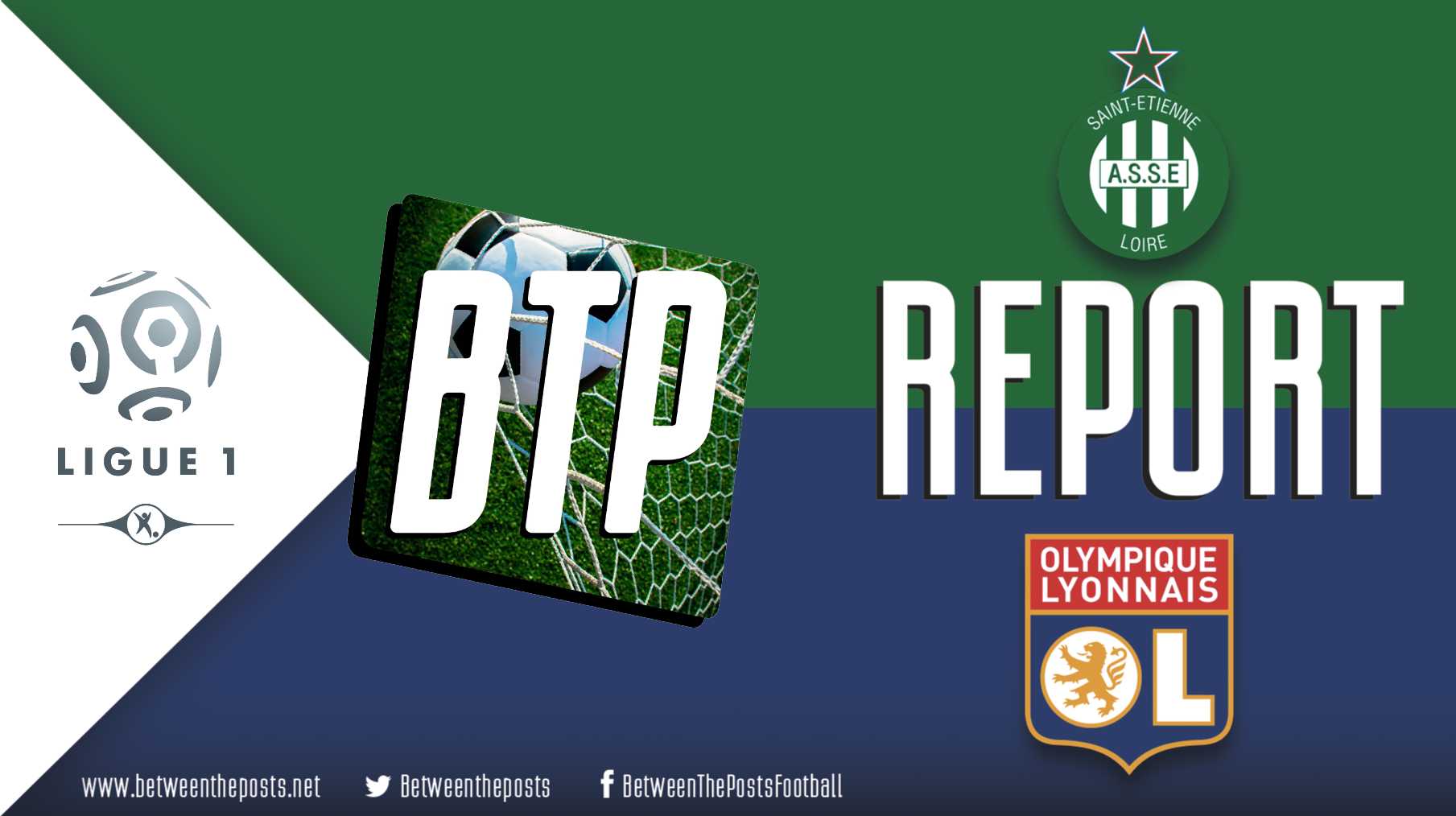 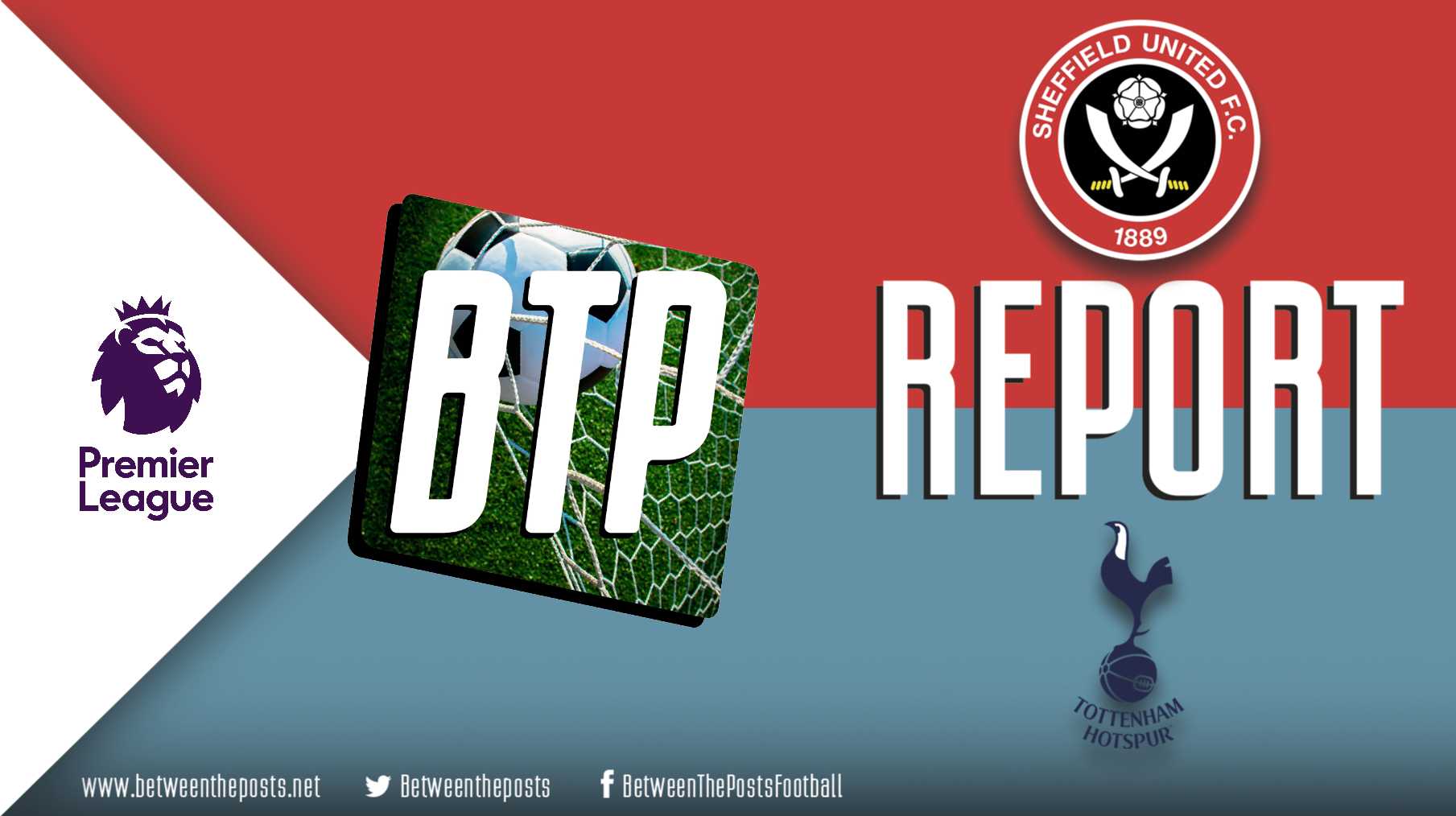