The clash between Leipzig and Borussia Mönchengladbach was the top match of this Bundesliga round. Leipzig’s struggles in the Europa League makes the league their biggest chance to qualify for European football next season. By beating high-flying Gladbach, Leipzig took an important step in this direction. Leipzig’s strategy featured their characteristic high pressure defending and high-speed attacking, and it proved too much for the visitors.

Leipzig have used a variety of lineups this season, usually with two strikers up top. For this match, Rangnick opted to play with a back-four and a midfield diamond. Compared to their loss against Salzburg, Leipzig changed their starting eleven on no less than eight positions. Only the central axis with center-back Dayot Upamecano, playmaker Bruma and striker Timo Werner remained intact.

Anyone with even the slightest familiarity of Leipzig’s style of play will know that they prefer a high intensity pressing style of football. The game against Gladbach was no exception to that trend. In possession, Leipzig operated with a lot of long balls and direct play into midfield or attack.

As typical for Leipzig under Rangnick, fullbacks Lukas Klostermann and Marcel Halstenberg contributed to the offense with long forward runs. With their vertical movement, and the narrow midfield diamond, they were tasked with providing width during Leipzig’s attacks. 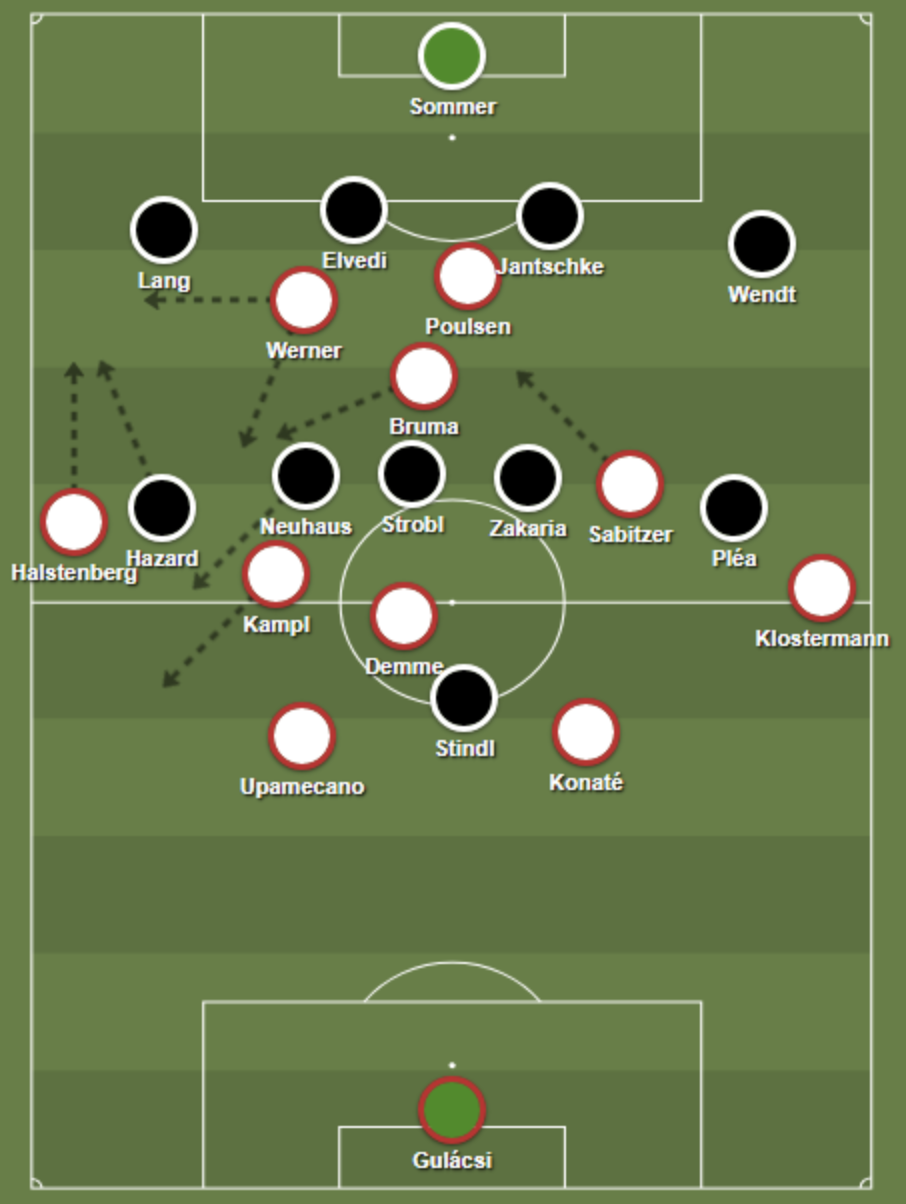 Leipzig’s 4-4-2 diamond formation relied on width by their fullbacks, and aimed to exploit the gap between Gladbach’s defense and midfield.

Leipzig’s striker duo played two different roles, complementing each other. Werner dropped into midfield at times, while Yussuf Poulsen provided depth all the time, in a target man role. With his high positioning, Leipzig always had a target man for long balls in their buildup, meaning they were harder to press.

Playing deep against the Gladbach defensive line, Poulsen usually occupied both center-backs, which created gaps for deep runs by more mobile players like Werner, Bruma or Marcel Sabitzer. This pattern showed as early as the second minute. Poulsen laid off a chipped ball for Werner, who started his run from the left wing. After a one-two with Marcel Sabitzer, the pacy striker scored the opening goal.

Leipzig’s midfield diamond often allowed them to create overloads on the left wing. Keeping the distances between the central midfielders short, all players of the diamond regularly shifted to the left side of the pitch. In these situations, only right-back Klostermann provided width on the right side.

Contributing to the lopsided formation, left central midfielder Kevin Kampl often collected the ball in the left fullback zone, allowing fullback Halstenberg to progress further up the pitch. As Gladbach’s midfielders often pressed Kampl too late, the Austrian could pull the strings for Leipzig with his passing range. This was on full display in the early stages of the game, where Kampl played a lot of chipped balls to target man Poulsen. 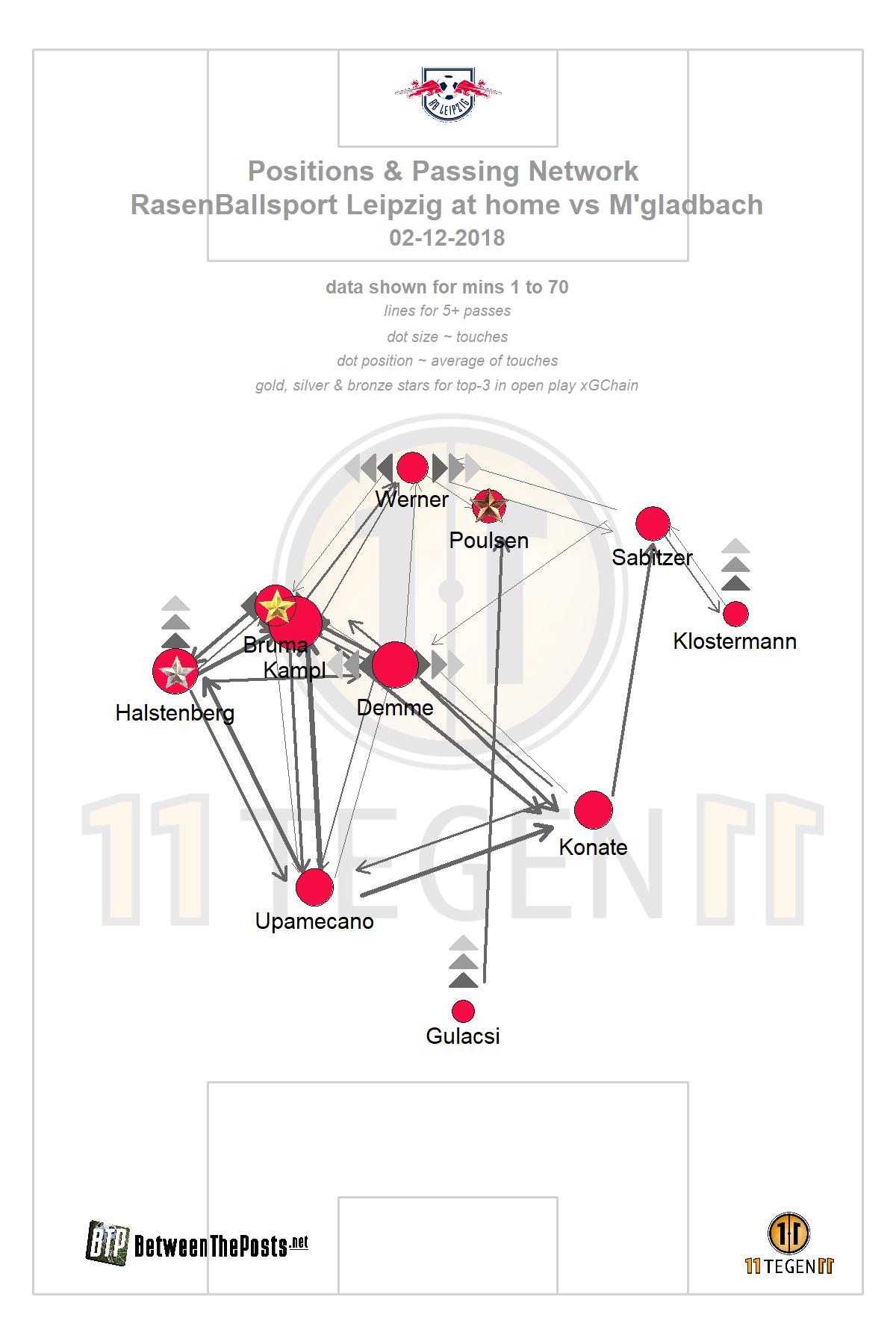 The passmap illustrates how lopsided Leipzig’s formation was, with most of the action taking place around Kampl on the left side.

Gladbach struggled to close the gap between defense and midfield

Gladbach struggled to prevent Leipzig from getting into the space between their lines. Their midfielders struggled to keep the defensive structure intact, while also covering the runs made by the Leipzig midfielders.

An example of the disorganization of Gladbach’s midfield was when midfielder Florian Neuhaus followed the backwards movement of Kevin Kampl. Holding midfielder Tobias Strobl advanced to close the gap left by Neuhaus’ forward pressing movement. However, with Strobl leaving his defensive midfield position, the distance between Gladbach’s back four and midfield widened.

To press opposition midfielders receiving the ball in this area, Gladbach’s defenders were forced to move out of their position. The domino-effect of Gladbach players making up for positional deficiencies was complete and Leipzig got what they wanted: gaps to exploit in the last line of Gladbach’s defense.

Most teams use different formations in defense or attack. Not Leipzig, or at least not in this match. Leipzig kept their 4-3-1-2 system intact even after losing the ball, opting to press high up the pitch in a rather straightforward system.

Both strikers pressed the opposition center-backs, preventing them from playing forward passes and triggering passes to the fullbacks. Whenever one of Borussia’s fullbacks received the ball, central midfielders Sabitzer on the right side or Kampl on the left side moved out to press. Playmaker Bruma stayed with holding midfielder Strobl and prevented him from getting involved.

The main goal that Leipzig wanted to achieve with this intense pressing was to minimize space for Gladbach to play in. Therefore, all midfielders shifted towards one side of the pitch when the ball was played out wide. Furthermore, the narrow back four of Leipzig positioned themselves as high as possible to keep connected to the advanced midfield. 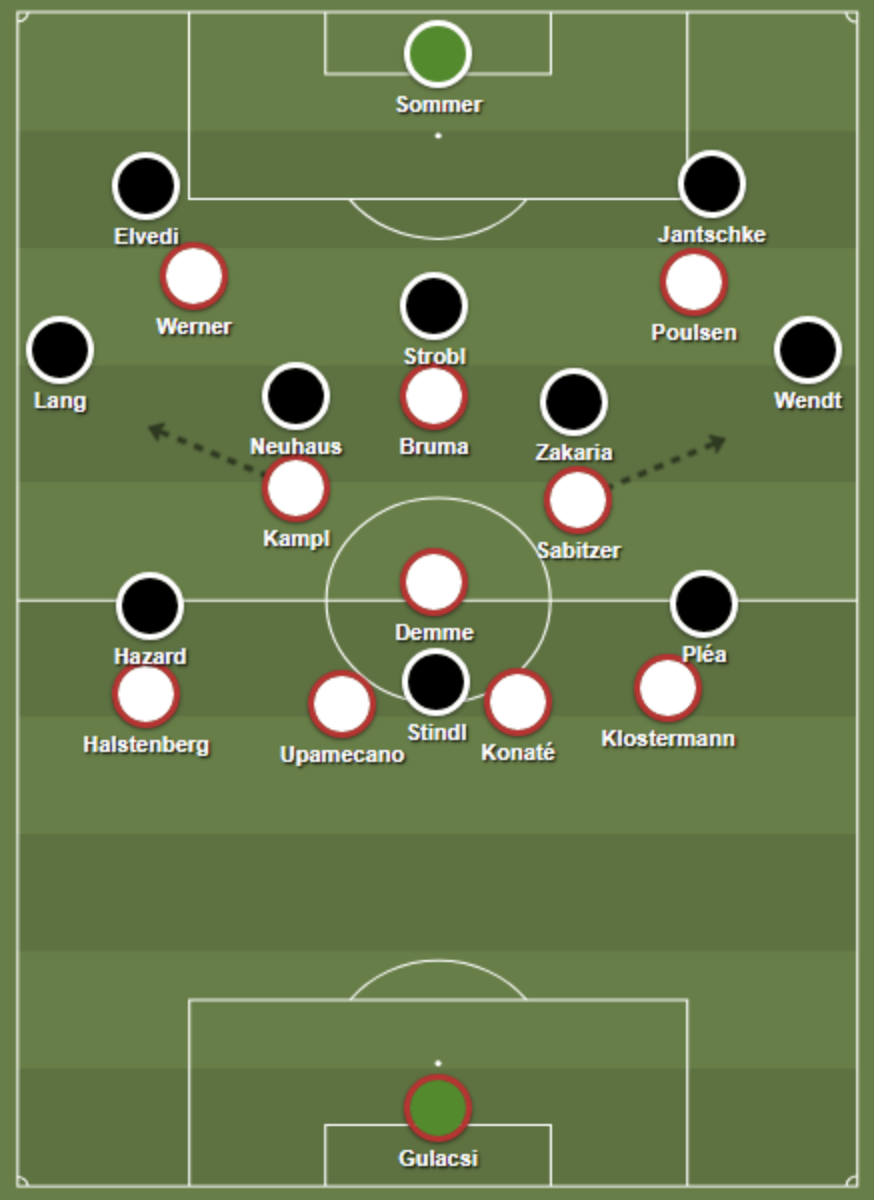 RB Leipzig’s high press – still in their 4-4-2 diamond formation – forced Gladbach to find their fullbacks and the only options left open.

After struggling with the intense Leipzig press during the opening stage of the game, Gladbach slowly started to find their feet. Increasingly using their goalkeeper Yann Sommer in the buildup, Gladbach created a three-versus-two situation against the forward duo of the home side.

In addition, both full-backs enjoyed more positional freedom and moved higher up the pitch. Against a formation without wide forwards, like Leipzig’s diamond setup, space is to be found on the flanks. Gladbach’s fullbacks received the ball more often and managed to pull Kampl and Sabitzer out of their central positions. Gladbach created their biggest chance of the game after a cross from left-back Wendt found the head of striker Lars Stindl. 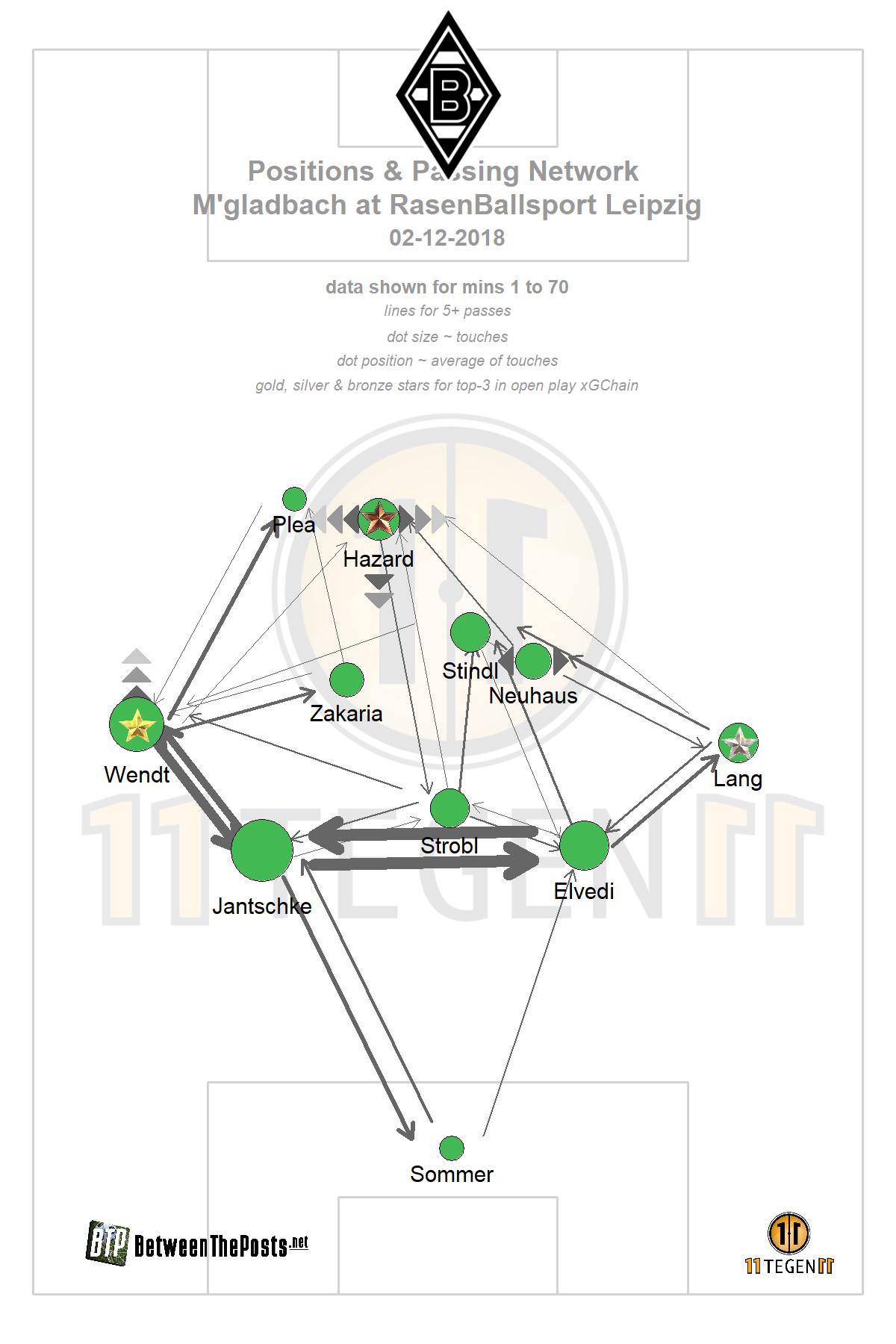 Lots of passes between the center-backs and hardly any connections into midfield.

Leipzig’s striker duo Poulsen and Werner were the key players of the match. Both posed a constant risk for Gladbach’s defense in transition moments. Tasked with pressing the opposition center-backs, they stayed high up the pitch during Leipzig’s defensive phase. After winning the ball, Leipzig attempted to find their strikers as soon as possible.

This was exactly how Leipzig scored the second goal, right before half-time. Gladbach’s holding midfielder Strobl was too slow to track back Poulsen, meaning the center-backs were facing a two-versus-two situation against the deadly pace of Werner. After Poulsen outplayed one defender and goalkeeper Sommer, Werner finished the attack by scoring his second goal of the day.

The press in their diamond formation required a lot of running from all Leipzig players and this led to reduced power in the final stages of the match. Recognizing this, Rangnick replaced midfielder Kampl with Stefan Ilsanker, who moved back between the center-backs as an additional defender. This changed Leipzig’s formation to a 5-3-2 to close off the central areas and defend with an extra player in the penalty-box. Although Gladbach changed to a back three to gain more offensive power, the away team could not threaten their more withdrawn opponents.

Once more Leipzig demonstrated their strength against an offensive-minded team. Leipzig showed how to stop Gladbach’s attack with a courageous press. Moreover, Rangnick’s team also convinced during possession with direct play towards the opposition goal. Three well-deserved points see them rise to the third place in the Bundesliga table, and approach Gladbach to just a single point.

Borussia Mönchengladbach failed to deal with Leipzig’s dynamic movements in attack in the beginning of the match. Even though they managed to settle later on, by that time the Gladbach defense had already been exposed in counterattacks and had conceded a second goal. This proved too much for them to overcome against a more conservative defense in the final stages of the match. 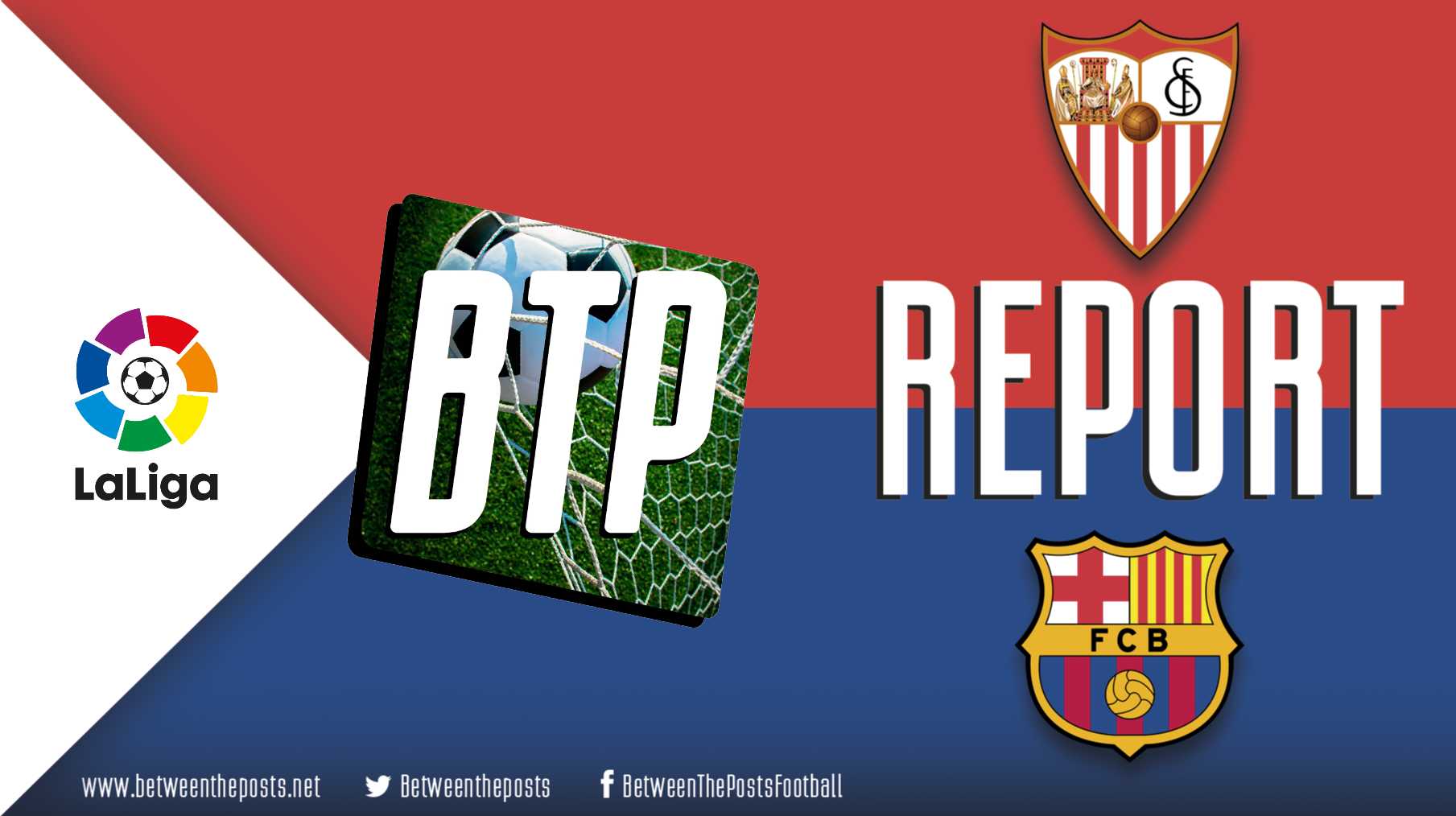