There were a lot of tactical aspects that gave colour to this match. From Betis’ problematic attacking structure to the manipulation of Betis’ center-backs and how Barcelona’s offensive players consistently created space for themselves. All in all however, this match was mostly defined by an outrageously good performance by Lionel Messi, even by his standards.

Afforded just their second midweek break since the turn of the year (!), Quique Setién made one adjustment to the eleven that beat RC Celta de Vigo away last Sunday – Cristian Tello stepped in for Francis Guerrero.

Ernesto Valverde also only made one change from the side he put out in Barcelona’s definitive 5-1 victory over Olympique Lyonnais on Wednesday night. This saw Arturo Vidal take Philippe Coutinho’s spot in the front three, even though the Chilean powerhouse would mostly feature in midfield throughout the match. 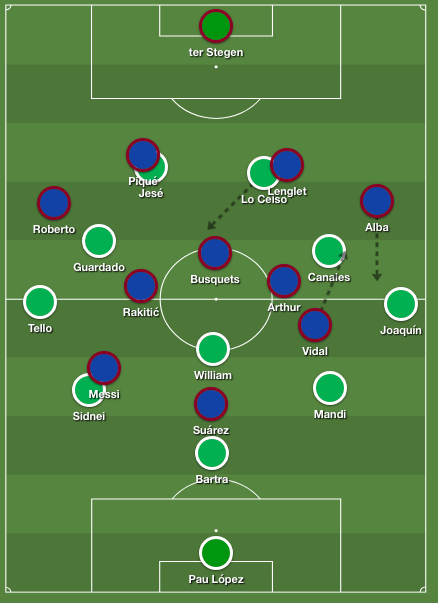 All twenty-two outfield players in their nominal positions when Betis had the ball.

Betis’ proactive, aggressive, man-marking, high pressing setup took the game to Barça right from the off. Their intent was clear, as one could expect from a side coached by Setién. Whilst Barça were happy to draw in the press, Betis were equally happy to go all guns blazing in their tracking of each pass. In fact, four of the home side’s seven fouls inside the opening half hour were from their center-backs, three of the total number coming in Barça’s own half, where they had harassed the ball-carrier who typically had his back towards their own goal.

Equally, the bitty nature of the opening period played into Betis’ hands, in terms of possession, as they gained confidence from the small duels they were winning high up the pitch, when pressing and when counterpressing.  After losing possession, a team immediately moves towards the ball as a unit to regain possession, or at least slow down the pace of the counterattack.

Against the home side’s rough 3-1-5-1 shape – which consisted of Andrés Guardado, Sergio Canales and Giovani Lo Celso drifting from side-to-side – Barça looked to match their shape, to some extent. A key factor was being able to pressure William Carvalho and having a three-versus-three situation up top, so that they could pressure the deepest players whenever possible.

Arturo Vidal, despite joining the three up front, had an important and versatile defensive role. Particularly when his opposite number Aïssa Mandi had the ball, he would retreat in line, in order to block access into Canales. Canales frequently rotated wide, so that Joaquín could pin Jordi Alba back and he could thus receive freely. Vidal showed his qualities as a true team player, as he also filled in as a wing-back when Betis had possession on the far, left side, so he could deny Betis access into Joaquín on switches and crosses.

Despite such support, Betis did still threaten Barcelona through initiating play down that side. In the fifth minute, Canales’ movement wide – when Vidal was still high up – allowed Betis to move back inside past the forward line. From there Lo Celso picked up the ball and lofted a diagonal pass over the top for Tello.

It was a sign of things to come, as in the thirteenth minute, the same attacking pattern saw Joaquín’s diagonal switch meet Guardado. The inch-perfect pass was met by a cushioned touch back across where the ball glanced past Jesé, who could only swipe at it, meaning the glorious opportunity was wasted.

An overall theme of Barcelona’s season – or maybe even decade – has been that Messi carries the entire team on his back when it is struggling. So, what to expect after an opening phase in which Betis were the slightly better team? Some Messi magic.

Busquets, on this occasion, combined with Messi to exploit the flaws of the opposition’s defensive setup – being able to be first to the ball whilst using the predictability of the press to evade it. He then located Arthur, who was brought down by Canales. A free kick from, say, twenty yards out. Light work for Leo Messi, who struck a thunderous, unsavable shot into Pau López’s near, top corner. Barça led inside twenty minutes.

Betis kept on going, however. In similar fashion to before, with William smartly pushing on to offer a way out of Barça’s press against the near-sided flank. Tello was worked into a one-versus-one position against Roberto, where he skinned him to get on the outside and drill it through the center. Were it not for Arthur’s top class defensive awareness, Joaquín would have had a tap-in at the far post. 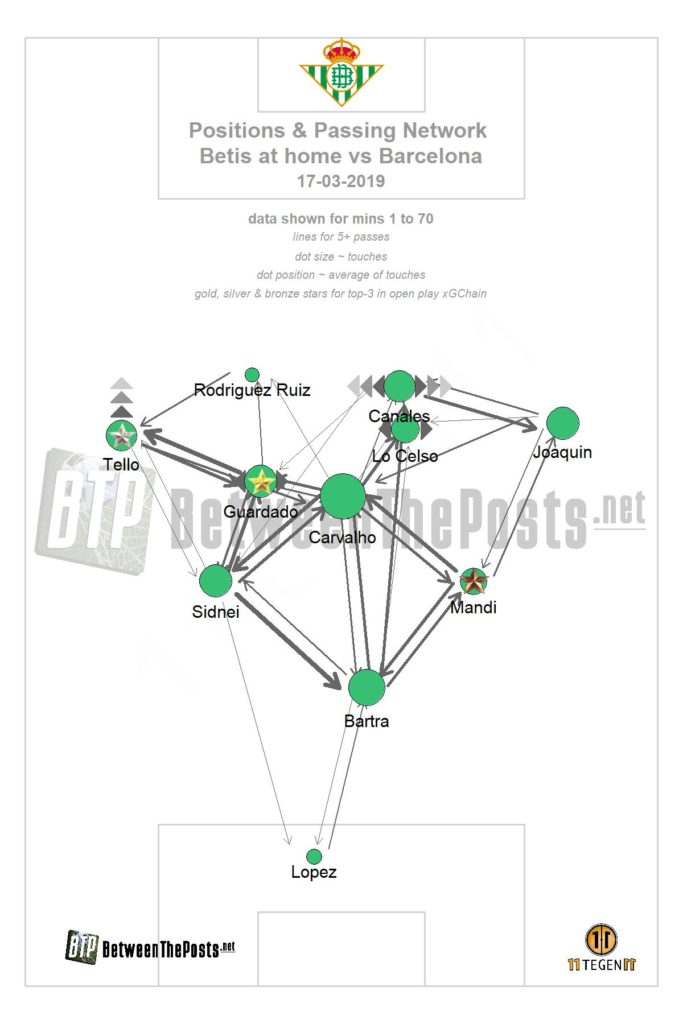 This passmap shows Betis’ biggest problem: getting into the final part of the pitch.

Barça work out how to flip proceedings

Undoubtedly, Betis were unlucky to be behind come the half-hour mark, but it was Barça’s subtle adaptations that made them worthy leaders at the break.

Due to their struggles in the buildup, Marc-André ter Stegen began playing longer, more direct balls into the attackers. Be it into the middle or into Alba wide left, Barça would look to skip the opening phase of buildup and launch attacks from there. And it was quickly paying off.

After fourty minutes, a stunningly accurate diagonal from ter Stegen to Alba set the Spaniard off well into Betis’ half. Now inside with Vidal, Barça perfectly demonstrated how to rip open the opposition’s man-for-man setup:

2) Bartra followed, but Messi clocked onto this and quickly pushed in behind him to receive

3) Suárez held his position to keep Sidnei pinned back, creating a huge diagonal slant between the three, meaning Messi was onside behind Bartra.

Messi squared it across only for Suárez to miscue his shot and pass up Barcelona’s biggest chance of the match so far.

The long ball approach saw them crowd Mandi once he brought the ball down. The instant turnover led to the most absurd one-two exchange between Messi and Suárez, leaving three chasing Betis players in their wake. Suárez’s back-heel through ball being the highlight of this exquisite move.

The side effects of Betis’ way

Betis had a lot of trouble reorganizing during transitions. The man-on-man approach left big gaps to exploit for Barcelona. Add that to the growing fatigue among the Betis squad and you have a nightmare scenario, where Barça can comfortably play through you. This is how Barça blocked any kind of attempts from Betis to create a response early in the half. In any case, they seemed unable to be able to hold outright possession and still penetrate the midfield.

As they had done all throughout the first half but without any major repercussions, Betis were losing possession due to the incoherency of the midfield. Due to this as well as some still relatively passive movements off the ball, the Betis central defenders were forced into running it into cul-de-sacs.

In some cases, this left the four deep buildup players completely detached from the rest of the attack, subsequently drawing in more dangerous pressure with no time or space for the center-backs to use to escape it. 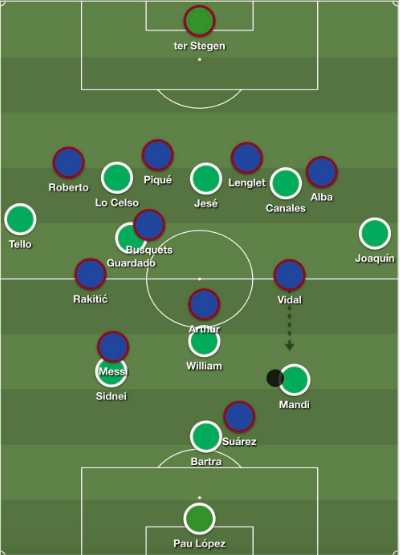 Typically, one of the deeper players would step out to try and engage and then play off of the temporary disorganization. However, the movement was non-existent, whereas the tracking back to pressure the ball from Suárez, and to lesser extent Messi, was superb.

In the 63rd minute, the aforementioned scenario played out with Suárez forcing the issue against William’s dribble out. With no protection in front of the defense, Suárez made a mockery of the three players tracking his ball run. Shifting the ball between his feet, resulted in the toppling over of Bartra, who subsequently tripped up Canales, before Suárez touched it past Mandi and slotted into the near corner. A goal that was as magnificent as it was comical, as it started with a severe error by William.

Having brought on Diego Lainez and Emerson, Setién instructed a switch to a more traditional 3-4-3 formation. This much more rigid system, now headed by Canales, posed more of a threat. Betis even managed to finally regain a foothold in possession, albeit brief.

It took some time for it to click but, in the 82nd minute, it did. Guardado’s run in-between substitute Nélson Semedo and Gerard Piqué drew in the right back, leaving acres of space for Tello to receive the switch in. His driving run towards the box was met with a hugely disappointing square ball attempt to Jesé. After picking up the loose ball however, Lainez laid it off for another substitute, in the form of Loren Morón, who expertly netted into the top corner, bringing it back to 3-1.

Hope now for Betis? Not quite. Not when you are up against Messi. Individual brilliance does not begin to describe the audacity of Messi’s finesse-come-chip shot from one corner to the other. The written word fails as a medium to describe this goal. Go look it up on YouTube, Facebook or Twitter.

Barcelona have surely won LaLiga now – the difference with a very disfunctional Atlético Madrid is ten points with ten games left – and all focus is on Champions League action now. From now on, we should watch their league matches through a different scope and wonder if we can learn anything from this match that might be an indicator how Barcelona will fare against other teams still left in the Champions League.

For instance, this match taught us Barcelona are not at all afraid to take a direct and aerial approach when facing a pressing opponent, which is an indicator of their tactics against, say, Manchester City. Barcelona only had 43.9% of the ball – their lowest figure since 2004/05(!) – which also highlighted and epitomized Valverde’s adaptability in many ways. 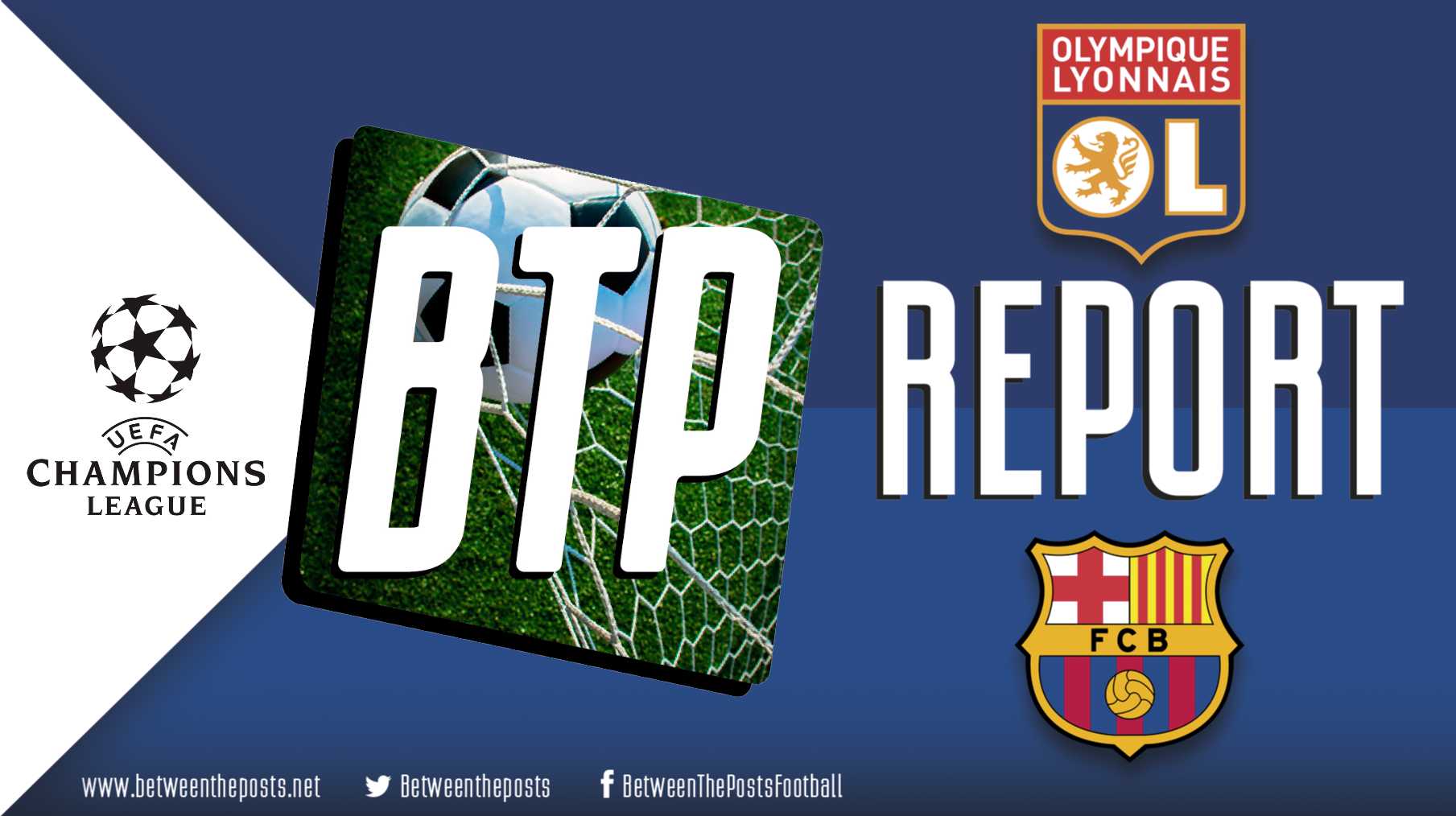