Quique Setién declined to return to a back five after drawing with Sociedad, allowing Real Madrid to cause mayhem with their high press and counterattacking skill. Things swung Betis’ way in the second half, before one of their former stars came back to snatch their souls at the death.

There should have been no debate as to whether Real Madrid had gotten worse under Santiago Solari, but not all fans had been convinced. Narrow victories in the league and morale boosting wins in the Club World Cup and Copa del Rey had blinded many to Madrid’s poor process and horrible underlying numbers.

And then came the loss against Real Sociedad.

Ironically, though Madrid probably deserved to get a result from that game, the 2-0 loss finally turned most Madridistas against their manager. As a result, all the pressure was on Solari coming into his first big test in LaLiga – Real Betis.

The Real Madrid manager reacted to the challenge by making drastic changes. He ditched his 4-3-3 formation for a 5-3-2 / 3-5-2 structure. Youngster Vinícius Júnior started up top next to Karim Benzema, Nacho became the extra man in the back line, and 22-year-old Sergio Reguilón replaced veteran Marcelo at left wing-back.

Real Betis manager Quique Setién also had a crucial decision to make in regard to his back line. For most of the season, he has gone with the 3-4-3 / 5-2-3 formation that turned Betis’ season around in 2017/18. Recently, that changed to a 5-3-2 / 3-5-2 shape, before Setién eventually decided to switch to a 4-3-3 formation against Real Sociedad, after a loss to Huesca last week.

Setién stuck with the back four against Real Madrid and kept almost the exact same eleven that played against Real Sociedad in the Copa del Rey. Starting goalkeeper Pau López was the only player who came into the side, replacing backup Joel Robles.

There haven’t been many positives to take away from Solari’s tactics at Real Madrid. He designs few offensive mechanisms, he struggles to help his team get out of presses, and he has no idea how he aims to stop counterattacks. The one bright spot has been a new-found high press, which has looked well-organized and intense whenever it has been applied.

That was certainly the case versus Betis, and it ended up being a key theme in the first half. 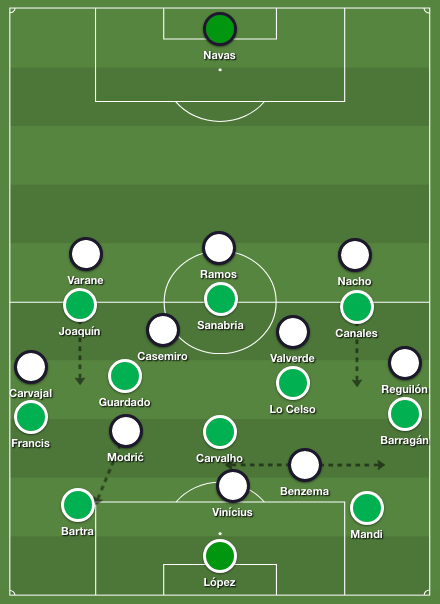 Real Madrid’s high pressing focused on stopping defensive midfielder William Carvalho from receiving the ball. Due to the natural shape of the 5-3-2 / 3-5-2 formation, this required some positional adjustments. Vinícius often had to tuck in and cut off the passing lanes to Carvalho, leaving one flank open.

Since Benzema generally pressed right center-back Aïssa Mandi, that free area usually appeared near left center-back Marc Bartra. However, Benzema had a certain amount of freedom to press where he pleased, depending on the flow of the game. For instance, early in the first half, he stopped his run towards Mandi and surged forward to dispossess Bartra because he was able to read the switch of play.

Other than those choice occurrences, it was Luka Modrić that had to step up and pressure Bartra, forcing Casemiro to shift towards the right and cover left central midfielder Andrés Guardado. Due to the energy this required, Modrić also had a certain amount of freedom in deciding when to press, which he used cleverly to force Betis towards their left wing.

There, Dani Carvajal was waiting to harass left back Francis Guerrero. If Betis managed to build towards their other flank, Sergio Reguilón stepped up towards Antonio Barragán.

Betis struggled mightily to get past Solari’s pressing scheme for most of the first half, aside from a few instances where Carvalho managed to become the free man. Benzema and Modrić’s clever decision-making gave Betis little to no time on the ball and Setién’s men were often forced into difficult vertical passes into midfield – which led to interceptions – or fruitless long balls.

Real Madrid’s aggressiveness created numerous turnovers that allowed Madrid to surge forward on the break. Vinícius Junior was the star in these situations. Not only was his pace and trickery tough to deal with, but he managed to win the ball back by successfully executing backwards pressing actions on Carvalho.

When Madrid could not obtain possession high up the pitch, they fell back into a low block. Benzema was the key man here, as his deep movement and patented link-up ability helped Madrid spark numerous counters after possession was won.

In the 13th minute, both Vinícius and Benzema combined to produce the opening goal. This time, it was Vinícius who came deep and progressed play. Benzema shifted over to the left and received the pass, before dribbling forward and attempting a shot. The ricochet fell to Modrić, who found Carvajal on the right wing. The right back’s saved shot fell to Modrić, again, and the Croatian scored a deflected effort from range to make it 1-0.

Real Betis assert more control in the second half

Setién did not make any tactical changes at halftime, but he likely told his team to calm down and be smarter when playing out from the back. It worked, as though Madrid still created moments of danger with their press, Betis began to dominate the ball to a ridiculous extent. Amazingly, they averaged 76 percent possession in the second half, up from close to 70 percent in the first forty-five minutes.

Nevertheless, Madrid still looked like good value for their lead for a certain period of time. While Betis spent more time on the ball, they still found it difficult to create anything notable. Madrid’s 5-3-2 low block was well-drilled and perfectly designed to stop Betis’ style of attack.

Solari’s midfield shifted energetically from side to side and the defensive width provided by the back five matched Betis’ numbers in attack; two fullbacks on the wings, two wingers in the halfspaces, If you divide the field in five vertical lanes, the halfspaces are the lanes that are not on the wing and not in the center. Because there is no touchline like on the wing, players have freedom to go everywhere. But this zone often is not as well-defended as the very center. This makes it a very valuable offensive zone to play in and a lot of chances are created by passes or dribbles from the halfspace. and one striker in the middle. 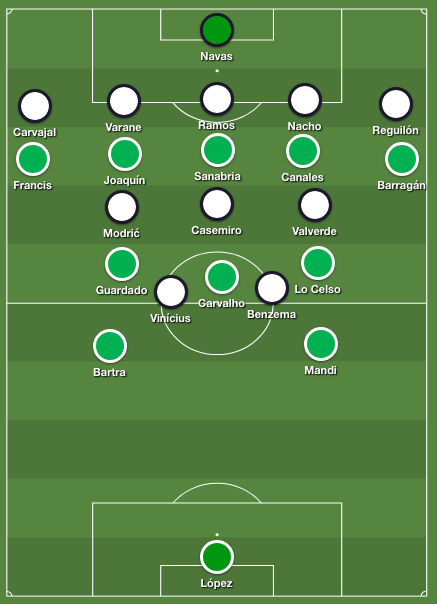 But as time wore on, the pressure started to become unbearable. Despite Madrid’s defensive competence, they lost their ability to fashion counterattacks. Part of that certainly had to do with the absence of Benzema, who came off at half-time due to an injury, but Betis’ counterpressing also improved.

The time they spent in Madrid’s half allowed Betis to better prepare themselves for losses in possession. That explains why Reguilón lost the ball three times in the second half and why Betis’ possession numbers became so extreme.

The scoreline shift prompted Solari to change back to his good old 4-3-3 formation. He brought on central midfielder Dani Ceballos for Reguilón and new signing Brahim Díaz for Federico Valverde.

It was a bad decision, as Madrid’s change in structure threw the game into end-to-end chaos. Players did not know how to adapt their pressing to the new shape and the loss of defensive width allowed Betis to flood forward down the wings.

So, of course, Madrid ended up winning the game from this position.

Late in the match, Casemiro got on the ball after a series of fifty-fifty duels and surged through the heart of Real Betis. He forced Carvalho to foul him, creating a good direct free kick situation. Ceballos, the former crown jewel of Real Betis’ 2016/17 team, stepped up and converted to capture all three points.

With the benefit of hindsight, it is fair to say Quique Setién made a big mistake by switching to a back four. The presence of five defenders would have created crucial overloads in their buildup and would have provided extra security against Madrid’s dangerous transition game. That does not mean Setién deserved to lose, but he did not put Betis in a position to win.

The good result will likely cause Madridistas to clamor for more of the 5-3-2 / 3-5-2 formation, but they should be hesitant to consider it as the magical solution. It worked well in circumstances that Madrid will likely not find themselves in for most of the season. Against opponents that force Madrid to have the ball – which is most opponents – Solari’s men will not be able to live solely off high turnovers and counterattacks.

That being said, credit must be given to Solari for his approach versus Betis. Though there were undoubted issues with the way he managed the second half, it was refreshing to see him implement competent tactics for once. That is all fans really want at this point, given that LaLiga is gone and there is no hope of winning the Champions League.