An encounter defined by pressing shapes from one side and buildup techniques from the other did not result in the extremes of an absolute stalemate or a high-scoring affair. Instead, Betis’ ability to break down their opponent’s press was what made them the superior outfit, even if the scoreline does not suggest the same.

After four unbeaten games, last week’s 5-1 drubbing at Villarreal was the very last thing Rubi would have wanted, in spite of the harsh scoreline. Despite the big loss, the manager clearly felt he saw enough promise in the attacking qualities of the starting eleven he selected, because he named almost the exact same lineup for this clash with Eibar. A 4-4-2 setup once again, with Andrés Guardado replacing William Carvalho as part of the central midfield pairing alongside Sergio Canales.

Following no wins in their opening five league games, José Luis Mendilibar was finding himself ramping up a smidgen of pressure, but their remarkable comeback from two goals down to Betis’ city rivals, Sevilla, has so far given them a much-needed boost. They then went on to beat Celta de Vigo and sneaked into the top half of the table in no time at all. As one can imagine, Mendilibar was not keen to make too many changes. The only swaps there were came in the form of Pape Diop for Sergio Álvarez at the very center of their 4-3-3 system.

It is a given that Eibar will press high up the field, no matter who the opponent. Here, at least to begin with, Mendilibar’s plan seemed to be oriented around closing off one side with a very slanted 4-1-4-1 formation that morphed into a more literal 4-1-2-3 shape. It always aimed to shut off the right side, which might indicate Eibar’s intent to shut down Aïssa Mandi’s impact on the ball. In any case, the one key step was to have the far-sided winger (often Fabián Orellana) step up onto the far-sided Betis center-back. If the hosts wanted to play to that side they had to field much longer, riskier passes out to the opposite flank, and, ideally for Eibar, they would be close enough against each man to pounce on any hesitations to do with this.

It was Canales, though, who offered the right solution in dropping deep away from his opposite number to overload When one team has more players in a certain area or zone than the other team. the Eibar attacker nearest to the ball. Whether that meant simply dropping to the side of the presser to exchange a square pass or going so far as to create a back three, with Alfonso Pedraza pushing on from his flat left back position, the midfielder was used to alleviate the pressure on the ball-holder, and thus open up the possibility for dangerous switches – only five of their twenty-three first half long balls were not aimed at either flank. 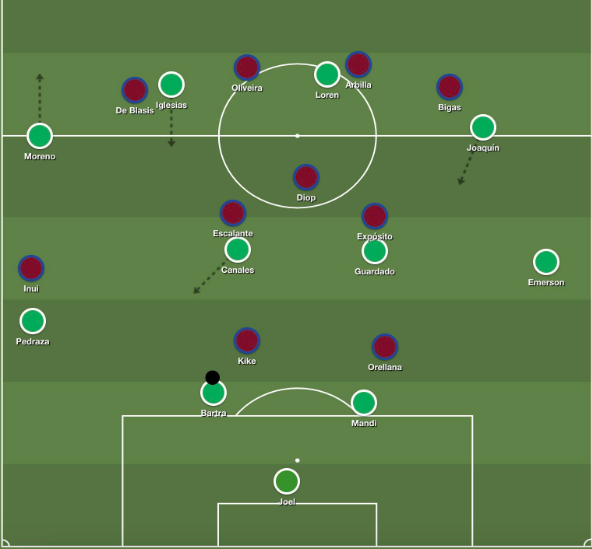 Although switches towards Álex Moreno on the left were more difficult to come by, it was relatively easy to field it into Betis’ right back Emerson. From there, Betis would look to instantly access the four-versus-four created between the lines.

Despite relatively little coming off these switches just yet, Eibar acknowledged the threat somewhat and resorted to a flat 4-1-4-1 defensive shape that used certain pressing triggers, rather than stretched positions. This, though, was when Betis found more joy getting it out to Moreno on the left. With Joaquín and Borja Iglesias the players nominally dropping into the halfspaces If you divide the field in five vertical lanes, the halfspaces are the lanes that are not on the wing and not in the center. Because there is no touchline like on the wing, players have the freedom to go everywhere. But this zone often is not as well-defended as the very center. This makes it a very valuable offensive zone to play in and a lot of chances are created by passes or dribbles from the halfspace. to narrow and deepen the opposing wide forwards and central midfielders, the Betis center-backs had so much more time in which to handle the ball. Better yet, Mandi and Marc Bartra are two specialist ball-players, so having them take on the weight of switching it so precisely was not a problem whatsoever.

In the twentieth minute, we saw the first real threat this offensive strategy posed to Eibar. Off the back of another long diagonal out to Moreno, his initial whipped cross whizzed past the two center-forwards in the box, before Loren Morón picked up the loose ball. Dribbling back inside across goal, this is where problems lay for the away side in defensive transitions – they were constantly allowing too much space in front of midfield, without being able to get out to close them down since the rush back had forced them to collapse in on themselves. At the same time, the sporadic back-tracking of the wide attackers was quite detached from the midfield three, meaning that they either kept too high, thus leaving a diagonal gap to be exploited between them, or followed the underlap too deep, meaning they were not there for protection in the second line at all.

As could be seen on this occasion, it was the former. On Loren’s burst inside, Inui’s right-sided positioning just high of the midfield left an exploitable diagonal gap, which the striker took full advantage of with a brilliant through ball across. Unfortunately for the hosts, Moreno’s effort was rifled into the side netting.

Similar occurred again in the twenty-sixth minute, this time the initial switch was out to the right, albeit helped by Diop’s temporary absence on the sideline. As he received and Eibar’s midfield line scrambled back, it gave Canales room to receive just deep of him. Moving in onto his favored left, he was then able to pick out a delightful diagonal over the top for Moreno’s back-post run. He then headed it back across for Loren, who let it roll across his body intelligently to open up the shooting opportunity, but his attempt was saved.

Eibar find their way, kind of

For the most part, Eibar had shown very little promise in possession. Their 4-3-3 shape’s main move was to have the central midfielder run into the halfspace channel beyond the dropping wide attacker. This way, they could draw open the middle of the park as Betis’ near-sided central midfielder would have to follow them to prevent the supply line into them. Whilst this did open up the space to drive inside, the ball-holders were very short of genuine options outside of Kike’s solo runs up front, which were all blocked.

As is so often the case in football, the opening goal scored had very little to do with the overall tactical patterns on display. In the thirty-fourth minute – following a foolish arm-across-his-man foul – Eibar were awarded a penalty. No question from the referee, or VAR for that matter, as Orellana stepped up to convert his second kick from the spot this season.

Eibar had their tails up from this point, and had the energy to keep working hard to close down Betis’ options more aggressively again. Betis were still getting up the pitch, but to much less effect now.

With Rubi’s side trailing at the break, he had to make an alteration to get his side back the edge they held for a short spell of the first half. His attempt to do so featured Betis switching to a 4-3-3 setup, with Canales in the holding role, Joaquín across and into the left central midfield role, and Guardado on the right-hand-side. On paper and in action, this was the right idea to win back control, and to exploit the space between the lines, since they could either overload the number six when Eibar’s central midfielders stepped out to press, or offer in the gap between defense and midfield in either halfspace when the wingers had pushed up.

That plan looked to be working until Mendlibar made another adjustment – a slightly more drastic one this time – which was to shift into a diamond shape, in order to equate for the access Betis now had into the holding midfield area..

Rubi even made the sharp response of using a diamond as well when Nabil Fekir came on, meaning both managers changed their formations at one point in the game. 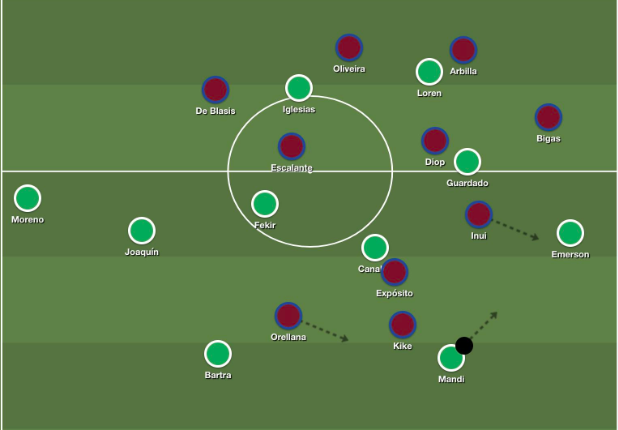 The diamond-off as, both sides mirror each other’s shapes.

Betis get equalizer and match ends in draw

Thanks to Eibar’s hard work, they were successfully shutting out Betis, where the hosts had little response… Until they got their own slice of luck.

It took sixty-six minutes, but Betis finally got on the board, as a free kick was simply floated to the far-side. Easy as you like; a simple hit to the far-post, where Mandi comfortably got the better of the mismatch he was given, found Loren back across and ready to tap-in. A deserved goal, to say the least.

Interestingly, it was Eibar who then had their tails up again, despite Rubi’s side needing a win much more than their visitors. The lack of quality in chances was inevitable, then, given how lifeless the visitors were in possession.

However, that did not mean the game was short of anymore drama.n the first minute of stoppage time, a red card forGonzalo Escalante – who hacked down Fekir – was followed by Betis’ third disallowed goal of the match, as Borja Iglesias was flagged for offside. All in all, it was enough either way for both teams to share the spoils.

A point a piece will bring a smile to Mendilibar’s face for the time being, but the performances are potentially of major concern if Eibar they do not click together soon.

As for the home side, a point does them much less good, especially with trips to Real Sociedad and Granada coming in their next two matches. Rubi, as it stands, appears to be entering a tight walk phase already – not dissimilar to his predecessor. 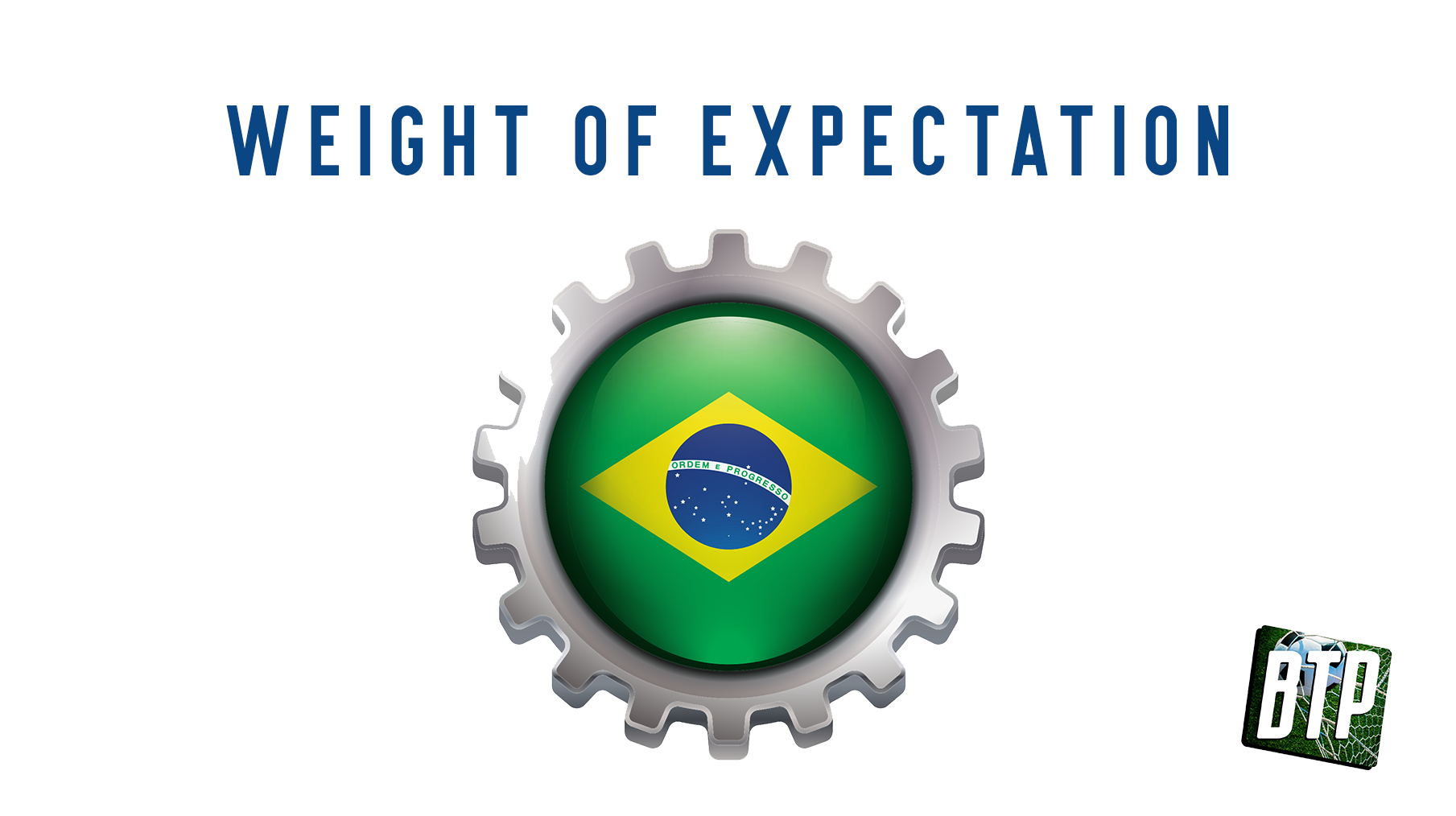 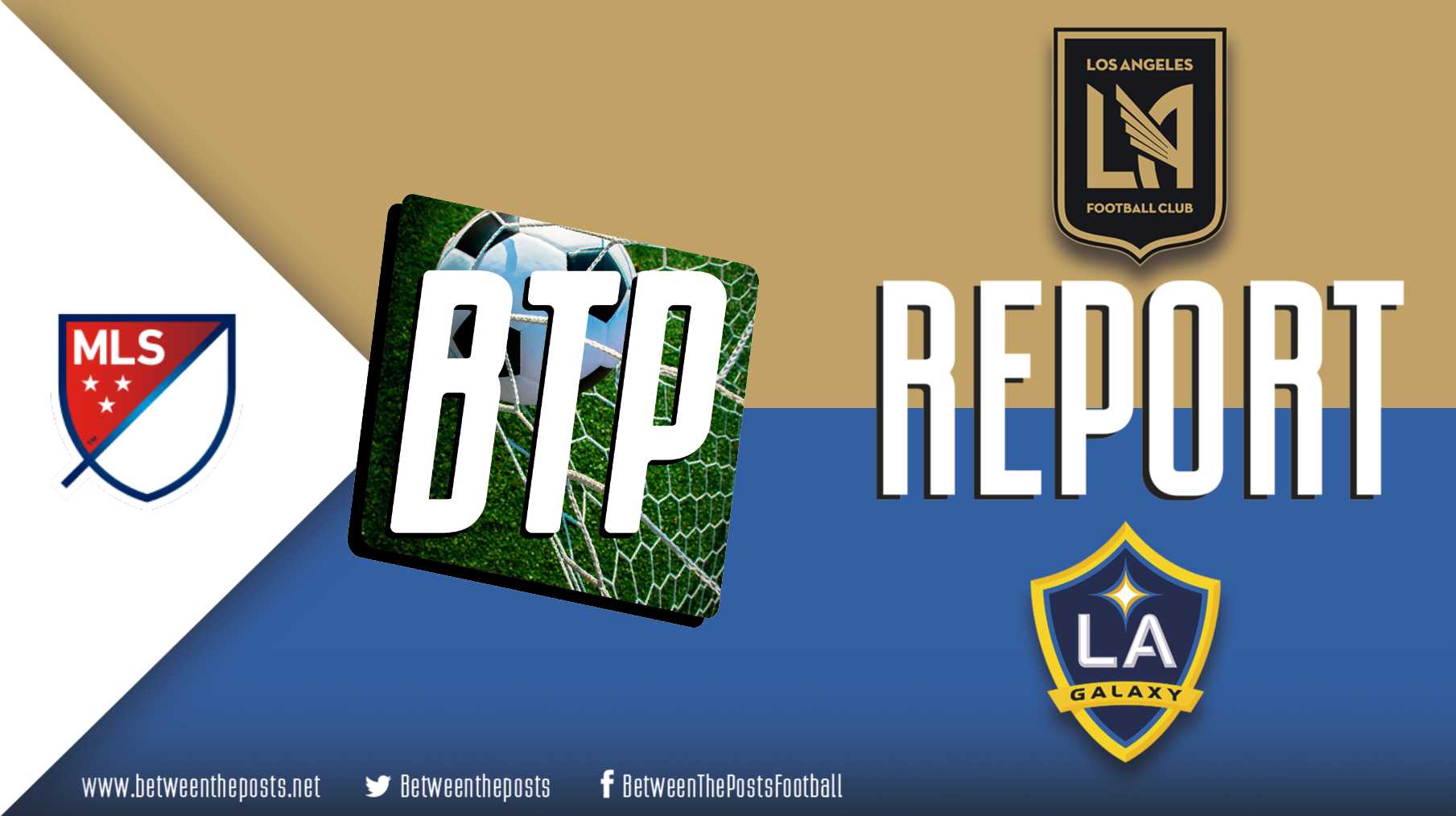