A youthful Ajax side stole the hearts of many football fans around the world by putting up a brave performance, and getting rewarded for it this time. In a perfect storm of events, Ajax quickly ran out to a two goal lead, which put them in the driver’s seat for the remainder of the game. Real Madrid had their best spell shortly after half-time, but ended up paying the price for a lack of collective structure in all phases of play.

Ajax fans had been in this situation before. In their first encounter, in Amsterdam, Ajax dominated Real Madrid, got all the credits for a good performance, but ended up with a 1-2 defeat after a lesson in efficiency. A seemingly impossible task to overcome. As has been the case in nearly all Champions League games this season, manager Erik ten Hag opted to play Dušan Tadić as the striker in the perennial 4-2-3-1 formation. This meant Kasper Dolberg started from the bench, and all three of David Neres, Donny van de Beek and Hakim Ziyech could be featured in the line of three behind the striker.

Real Madrid manager Santiago Solari went for the expected with a 4-3-3 formation featuring Vinícius Júnior, Karim Benzema and Lucas Vázquez up front and the much maligned Gareth Bale on the bench. In midfield, Casemiro started, which meant no Dani Ceballos in this game. While adding defensive stability, this also meant that Ajax had one less expert ball progressor to worry about when trying to press Real Madrid’s midfield and back line.

In defense, Real had to make do without skipper Sergio Ramos, who intentionally got himself suspended for this match. Such was the confidence that Real would reach the next round, after the win in the first leg. Ramos’ decision ended up biting itself in the tail, with a distinct lack of organization in the back four playing a large role in the early goals conceded. 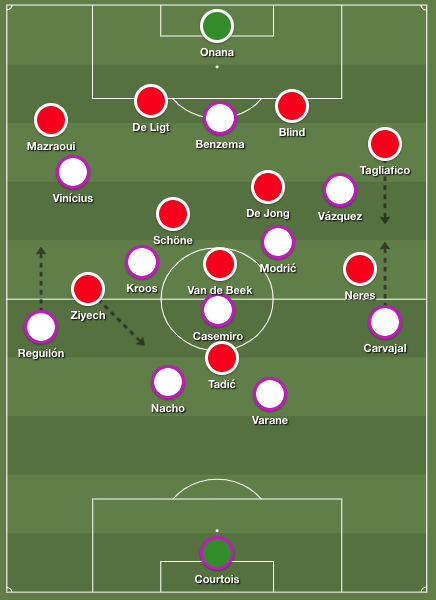 Ajax’ 4-2-3-1 formation matched up well with Real Madrid’s 4-3-3 shape, which allowed the midfielders to closely mark their counterparts without having to stray far from their preferred positions.

The match could not have started better for Ajax. First, they survived a moment of scare when Raphaël Varane hit the crossbar with a header from a corner. Then, Tadić and Ziyech capitalized on an error by Toni Kroos to turn a Real Madrid own-half throw in into Ajax’ first goal of the game, after only seven minutes.

Ajax sat back in a medium block, A medium block refers to a team that retreats in their own half out of possession, generally only disrupting their opponents some way into their own half. with Real Madrid dominating the possession share without creating significant chances. However, before Real could really settle and get their offense going, Ajax managed to extend their lead with a perfectly executed break. Tadić spun away from his marker Casemiro with a Zidane-pirouette (sic), and played a perfectly weighted through-ball for David Neres. The Brazilian rounded Thibaut Courtois to put Ajax virtually through to the next round. For the first time ever in their Champions League history, Real Madrid found themselves 0-2 down at home within eighteen minutes of play.

Is that Dusan Tadic or prime Kaka? I’m not too sure… #rmaajx pic.twitter.com/n0kPp7ovZu

Things quickly went further downhill for Real, as in quick succession wingers Vázquez and Vinícius Júnior had to go off injured, both leaving the field in tears. On came Gareth Bale – to a mixed reception from the crowd at best – and Marco Asensio. Solari quickly switched Bale to the left wing, in an attempt to take advantage of an already booked Noussair Mazraoui, thus replicating the original idea of pace on the left wing and a more tucked in role on the right.

One of the best matchups on the pitch took place right in the heart of midfield. In a fascinating back-and-forth battle between the master and the pupil, Luka Modrić and Frenkie de Jong shone for their respective teams. Both displayed elite levels of press resistance by keeping comfort on the ball, extending their decisions to the final moment, thereby maximizing the space for their teammates to play in.

Shortly before half-time, Gareth Bale ran in behind Mazraoui from the left wing, to hit the post with a chipped attempt over goalkeeper Andre Onana. In hindsight, this was probably the last moment Real got close to turning the tide.

The second half started with the much expected uptick in intensity from the home side that had probably been needed right from the start. They took a much higher stance, played with more advanced roles for their fullbacks, and managed to establish longer spells of possession and the associated stability. This resulted in a series of – albeit rather low chance – shooting opportunities. Ajax, in this phase, were forced back into a 6-3-1 defensive shape with wingers Neres and Ziyech – the former more dutifully than the latter – tracking the fullbacks and often ending up deep on their own half.

The final blow came in the 62nd minute. Tadić neatly curled the ball into the lop left corner with a first-time effort from the edge of the box. The Video Assistant Referee was called upon and, in minutes that felt like hours, confirmed that Mazraoui had indeed kept the ball in play with a sideline tackle on Reguilón. Facing a 0-3 scoreline, Real now needed three goals with thirty minutes left to play. Game over, it seemed.

Ajax initially managed to fend off Real’s desperate attempts to get back into the game – an Onana save on a close range Bale attempt, a Mazraoui block on Asensio. However, in the seventieth minute Asensio perfectly placed the ball on the inside of the post from a Reguilón cut back after Ziyech was late to track the overlapping run.

Just two minutes later, Lasse Schöne scored a contender for free kick of the season, curling the ball over Courtois from a free-kick nearly on the sideline far in Madrid’s half. Even though the Danish midfielder would later conform his goal had not been intentional.

With the match all but decided, Ajax were left unpunished in a moment where Frenkie de Jong clearly overplayed his hand and turned the ball over in close proximity of Ajax’ own penalty area. On the other side, Ziyech missed a close range finish, and Nacho get himself sent off in injury time for a cynical foul on Van de Beek. All of this ended up as a footnote in the bigger picture of Ajax putting up a 1-4 score line in Madrid. Putting up just this number in Madrid, it could not have been more symbolic for Ajax fans.

In the spell of one week time, Real Madrid saw all the nails being put in their coffin of a season. Three home losses in a row put the final dent in the remaining hopes of winning any silverware.

First, the 0-3 Copa del Rey loss to Barcelona, where the home side could still make a case of having had the better of the chances. Then, the 0-1 LaLiga loss to – again – Barcelona, which left them on a seemingly insurmountable twelve points gap in the league table. As a side note, this also meant that, for the first time in 87 years, Barcelona have now got the upperhand in El Clásico results.

Finally, tonight’s utter lack of a collective structure, which ended up in a painful 1-4 defeat and subsequent elimination from the Champions League. After winning the most prestigious tournament in club football three times in a row, Real Madrid are now no longer in contention.

It has been a tough season at Real Madrid. First the high hopes of Julen Lopetegui, and the aim of rebuilding the squad from the inside to make up for the departure of Cristiano Ronaldo. Then the early wave of decent result under caretaker Solari, which led to a formal appointment as manager. Underlying numbers never picked up though, and a spell of doom was always right around the corner. ‘What now for Madrid?’ is a difficult question to answer and probably one that will need some thinking before a clear and sensible answer can be given.

Vibes of ‘95 circulated for Ajax on a night of European football that could simply not have been better. The team undoubtedly won a lot of hearts with a very positive performance, and this time decisive moments fell Ajax’ way. It’s fair to say the manager Erik ten Hag got it all right, striking a fine balance between taking the game to Madrid with high pressure, and sitting back at times to absorb the pressure and conserve energy. As a reward, for the first time in 22 years, Ajax have progressed through a Champions League knockout tie.

Help us find the words…
Describe our victory in 1 word! 🤯#UCL #reaaja pic.twitter.com/BcR06MuL8A 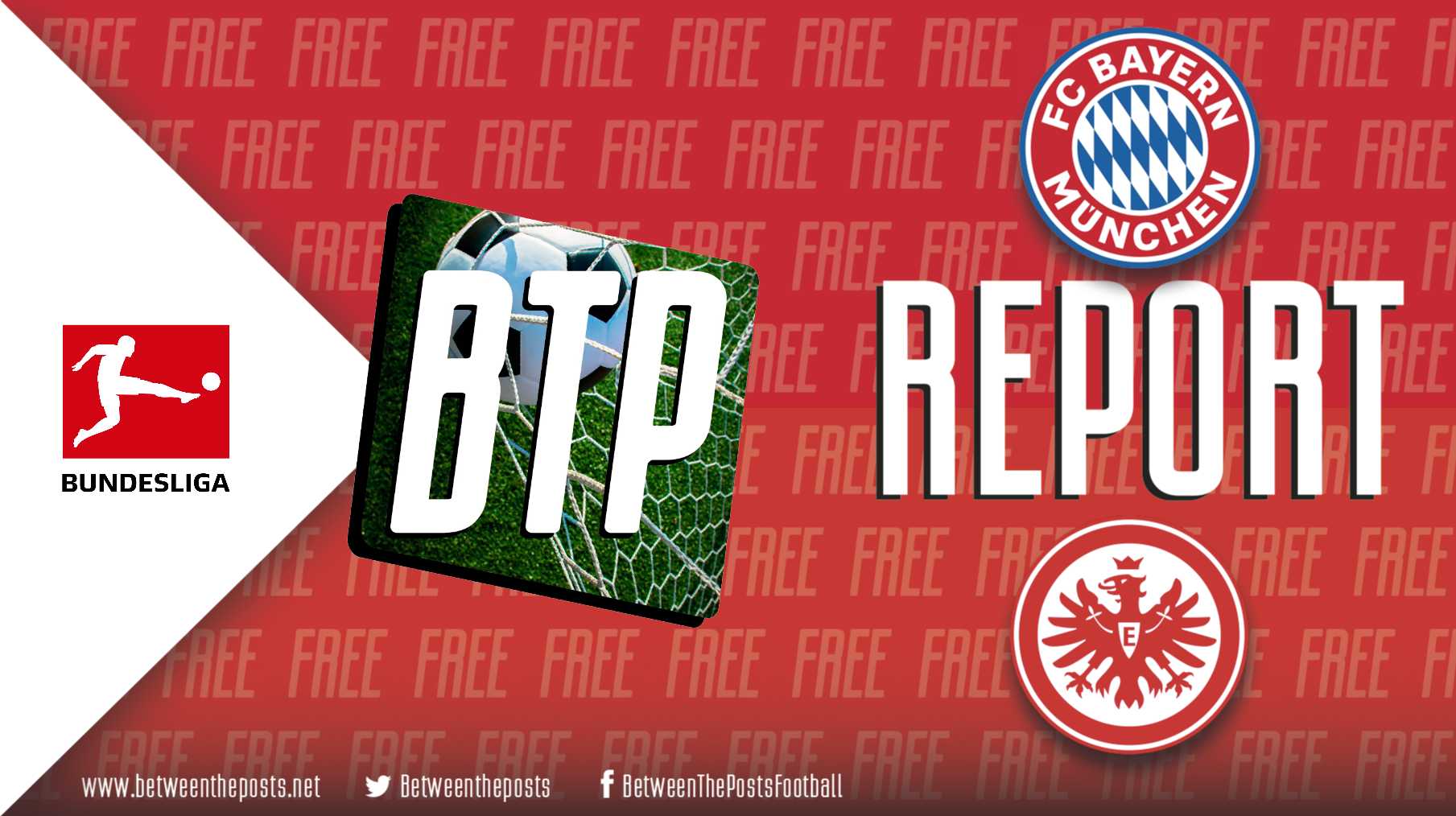 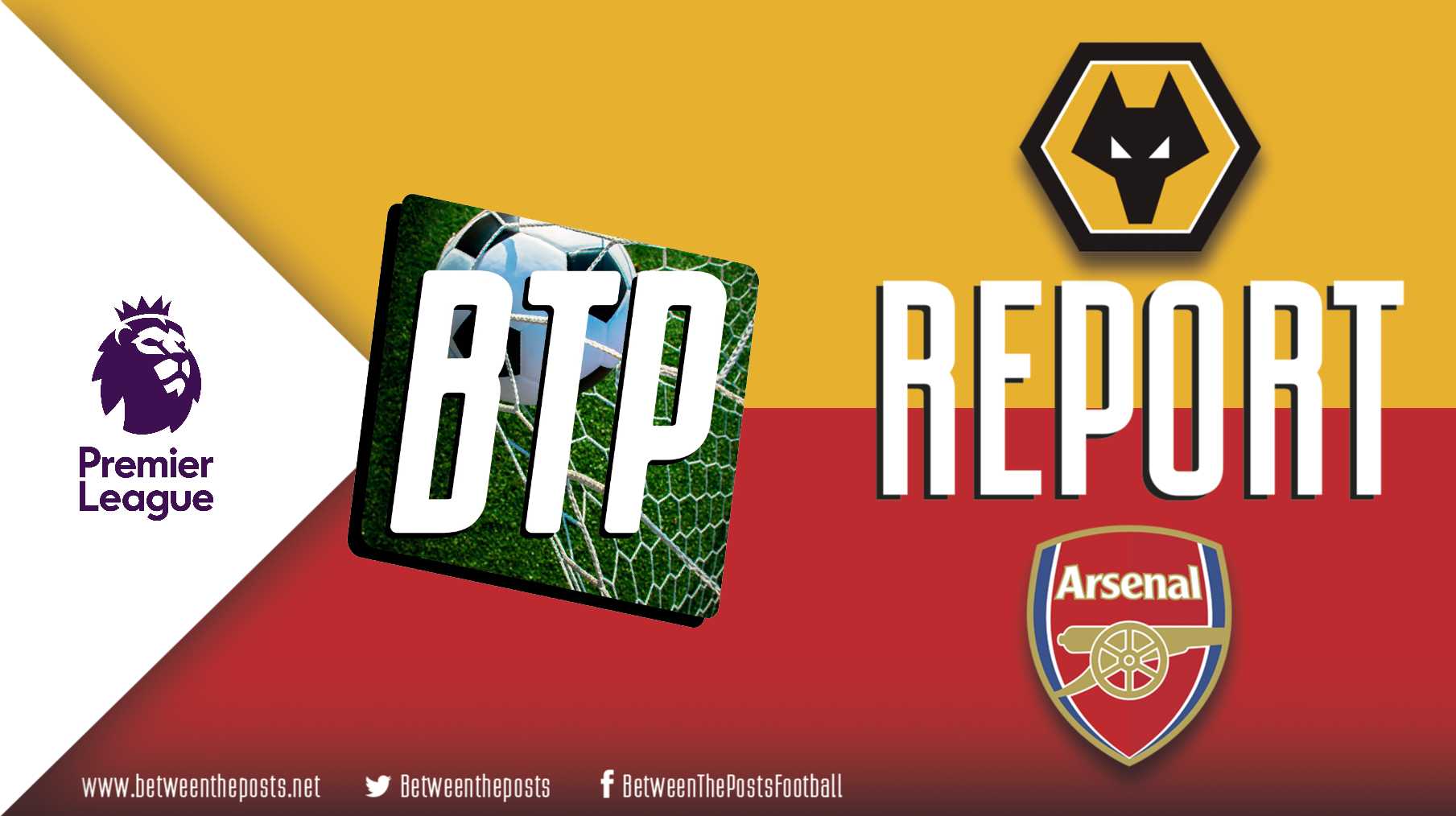