Both teams struggled to organize themselves properly on defense, creating bouts of end-to-end football that allowed Rakitić to score a chipped effort in the first half. The score held until full-time, even though Madrid tried their best to threaten through Vinícius Júnior.

Nothing tells us we are in the business end of the football season like Clásicos flying at you one after another. Yes, just after FC Barcelona beat Real Madrid 0-3 at the Santiago Bernabéu on Wednesday, the two giants of world football faced off again in the same location.

Despite what the scoreline might tell you, the Copa del Rey clash in midweek was far from one-sided. Real Madrid’s defensive organization limited Barcelona to only four shots, while Vinícius Júnior led a counterattack that enabled his team to rattle off fourteen attempts on goal. Barcelona’s win was simply a case of brutal finishing on one end and shameful profligacy on the other, meaning that Ernesto Valverde probably needed to make some changes to win the next encounter.

The Barcelona manager did just that, moving away from a 4-4-2 shape in favor of a 4-3-3 formation. The lineup remained quite similar, however, with the main adjustment coming from Sergio Roberto’s change in role – Valverde moved him from right midfield to right back. This pushed Nélson Semedo to the bench and allowed Arthur to man the center of the park.

Santiago Solari, who was probably pleased with his team’s previous performance – notwithstanding the loss – changed almost nothing. Only Gareth Bale and Thibaut Courtois were brought into the lineup – for Lucas Vázquez and Keylor Navas, respectively – and the 4-3-3 formation remained. 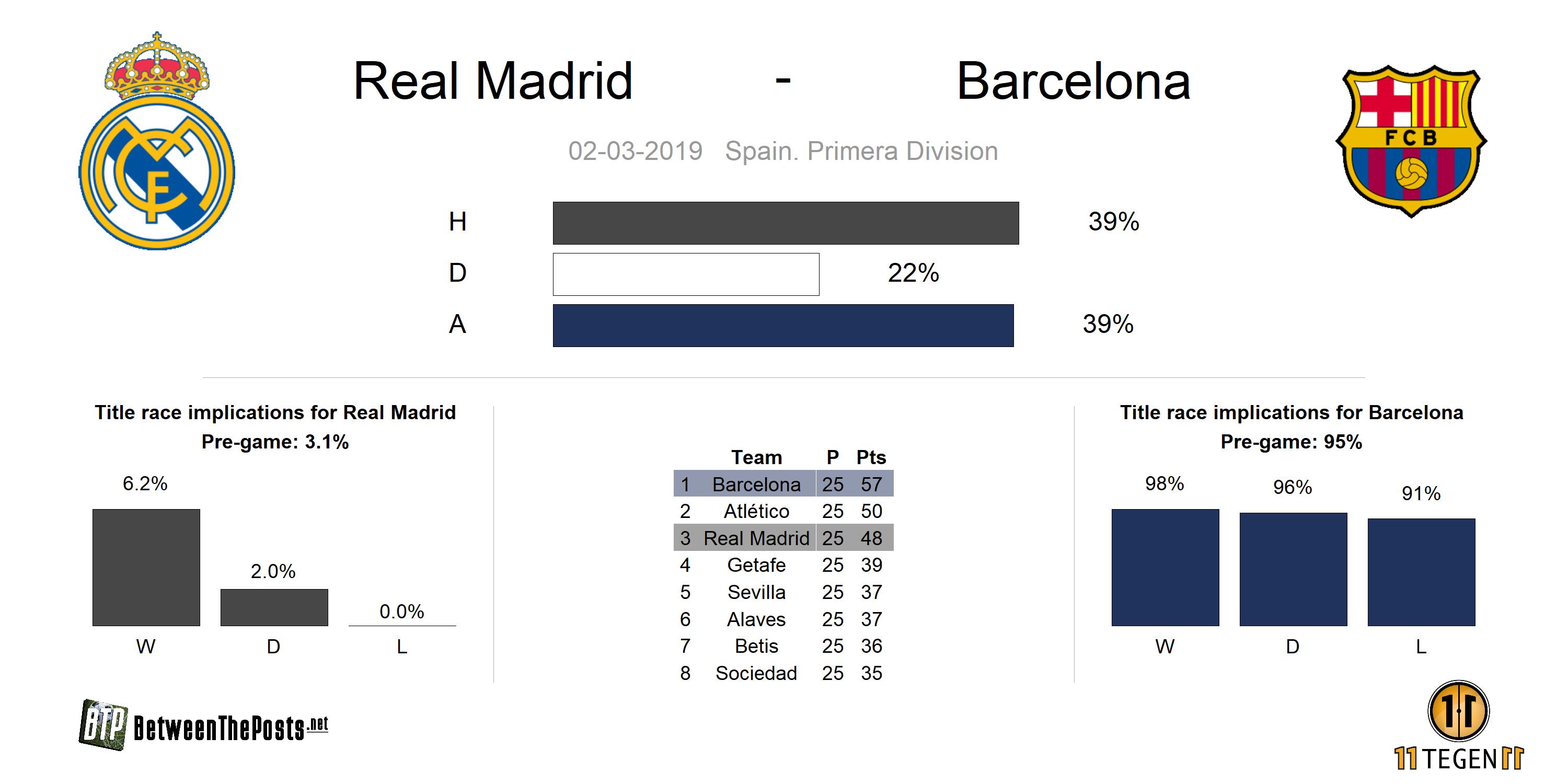 Real Madrid immediately engaged in high pressing at the start of the match. Solari’s men were especially physical with Sergio Busquets, as Toni Kroos and Luka Modrić gave the Spaniard no breathing space and forced him into early turnovers.

The battle in midfield created a chaotic affair with plenty of fifty-fifty duels, which led to an early free kick for Real Madrid and a few dangerous moments in transition. Barcelona eventually regained their composure and began to work their way into the opposition half, creating a more organized game state; Barcelona patiently possessed the ball while Madrid tried to counterattack.

The aforementioned dynamic was the pattern of the two previous Clásicos in the Copa del Rey. Yet there was a different look to this match. Madrid’s defensive organization, which had been excellent last time out, was confused. 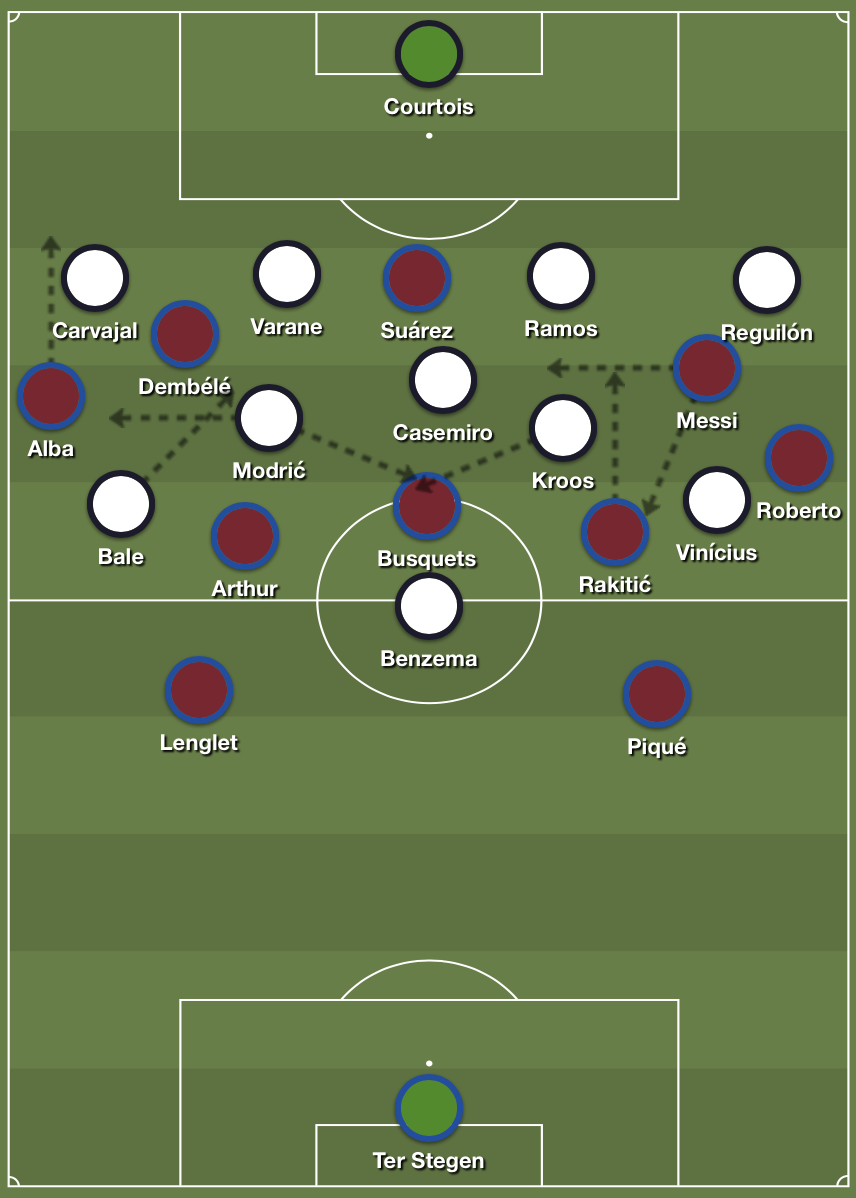 Perhaps it was Valverde’s change to a three-man midfield that did it, but Real Madrid could not seem to figure out who was supposed to mark Busquets. The assignment switched back-and-forth between Modrić and Kroos, greatly damaging Madrid’s defensive organization. Though the team seemed to give the job to Kroos after a while, the desire to have a central midfielder marking Busquets always left a free man in Barcelona’s midfield.

To make matters worse, Bale’s defensive role also lacked clarity. Unlike Vázquez in the Copa del Rey second leg, Bale did not man-mark Jordi Alba. Instead, he was more concerned with defensive work in central areas. That involved closing down the passing lane to Ousmane Dembélé, occasionally pressing Busquets, and even meandering over to the other flank. This often forced Modrić to drift wide in order to maintain a semblance of defensive width.

Hence, it was not a surprise to see Barcelona take advantage of these deficiencies. 38% of their attacks went through the left wing – as opposed to 25% for the opposite side – as Alba was generally free to receive the ball and make plays. Lionel Messi and Ivan Rakitić also found space behind Kroos, creating two high-quality chances that ended up resulting in nothing.

Barcelona’s defensive structure has its own issues

Valverde’s team probably could have created more shots like that if they had a better handle on the game. Instead, their defensive structure was almost as questionable as their opponents, allowing Madrid to produce a smattering of half chances. 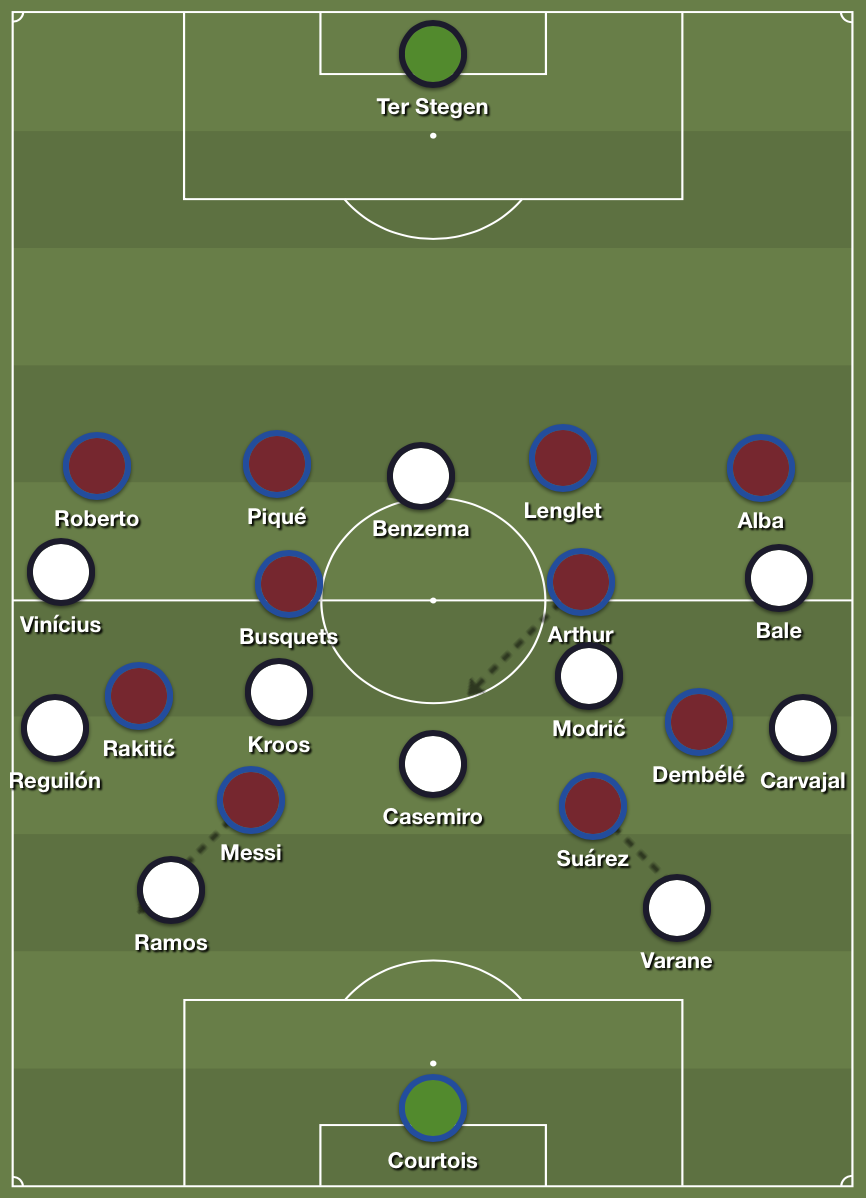 Their issue revolved around their pressing. The order from Valverde was to transition to a 4-4-2 off-the-ball, with Luis Suárez and Messi initiating the high press by hounding Sergio Ramos and Raphaël Varane. Rakitić and Dembélé covered the fullbacks, while Busquets and Arthur formed a double pivot 4-2-3-1 is one of the most frequently occurring formations in football. The two most defensive midfielders are called a ‘double pivot’. in midfield.

If you studied the graphic above, you will notice that no one is marking Casemiro, which was an issue that Barcelona never adequately addressed. Both Messi and Suárez declined to consistently close off the passing lane into the Brazilian, requiring Arthur to often step up and apply pressure. This made it far too easy for Madrid to find the free man and enter the final third. The one-third of the pitch that is closest to the opposition’s goal. 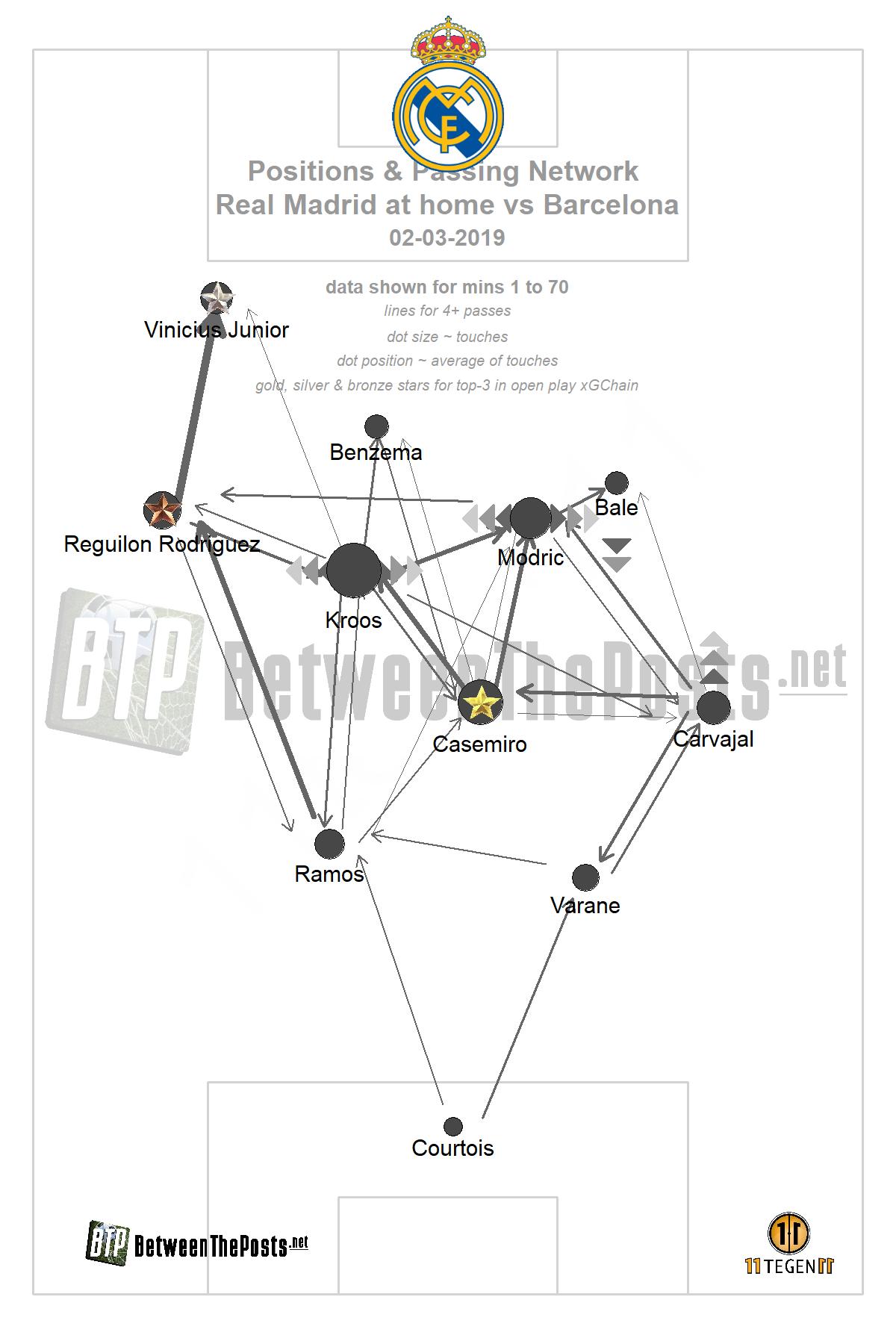 As a result of Barcelona’s lack of pressing, Casemiro grew into the most important ball progressor for Real Madrid in this match.

Barcelona were slightly better with their counterpress, After losing possession, a team immediately moves towards the ball as a unit to regain possession, or at least slow down the pace of the counterattack. especially to start the match. When Barcelona lost the ball on their left flank, players were already in position to start tackling and marking immediately. Casemiro initially suffered under this environment, losing the ball twice in quick succession. But the counterpress soon started to fade as Messi’s free-roaming role created avenues for counterattacks down Barcelona’s right.

As a result, Barcelona could never really control the first half, and Madrid enjoyed a sizable amount of time in the final third. In that part of the pitch, Barcelona’s defending got even shabbier. The 4-4-2 shape often looked disconnected and Rakitić and Dembélé struggled to maintain adequate defensive width. This allowed Madrid to switch the ball from side-to-side and attack the box, something they failed to truly take advantage of thanks to their overreliance on Vinícius.

In the 26th minute, it was Real Madrid’s poor defensive organization that collapsed first. After a botched counterattack, Kroos and co. failed to reorganize themselves in time, forcing Ramos to step up into midfield. Rakitić took advantage of this by making a run into the channel, receiving a pass from Roberto, and chipping in the opener over Courtois.

Madrid responded by flooding forward and possessing more of the ball, which led to few concrete chances thanks to the aforementioned overreliance on Vinícius. In fact, it took until the 44th minute for Madrid to create something noteworthy, when Modrić headed a chance over the bar after a Casemiro switch pass. A pass from one side to the other. 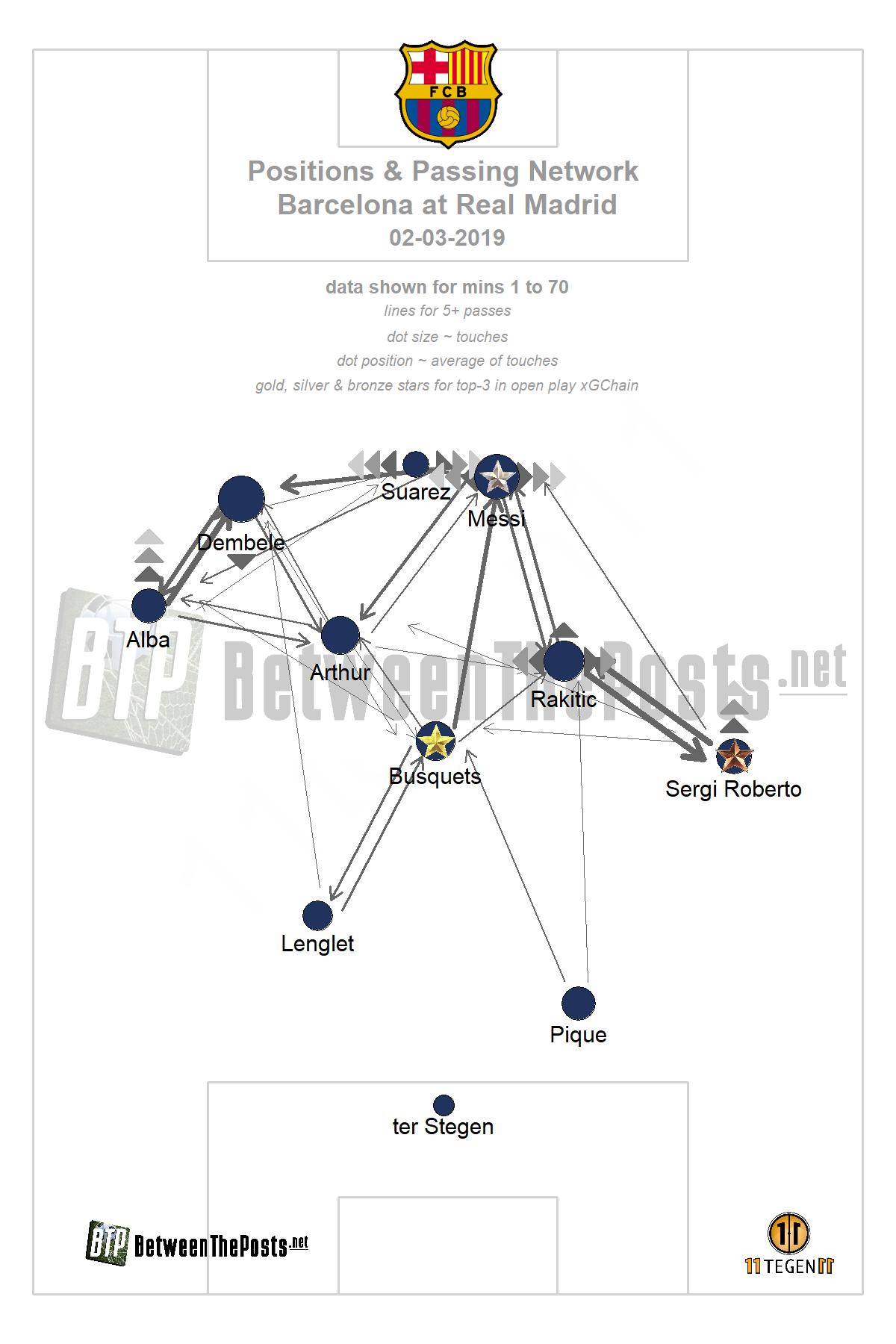 Solari must have pumped up his men at half-time, because Real Madrid played with greater intensity after the restart. Karim Benzema led the way on offense and defense, dispossessing players high up the pitch before trying to initiate one-two combinations. Vinícius worked off the Frenchman’s energy to fashion two shooting opportunities for himself. His first attempt nearly snuck its way past Marc-Andre Ter Stegen’s glove and into goal, while the second was blocked.

As the game trickled pass the half hour mark, the prior energy slowly began to dissipate from proceedings. Barcelona shrunk further into their defensive shell and Madrid’s lack of collective mechanisms and attacking structure were laid bare for the entire world to see. Out of ideas, the home team tried shots from long-range and Solari made some substitutions.

When that did not work, Madrid grew increasingly desperate and launched attacks without rhyme or reason, making it easier for Barcelona to counterattack. Valverde’s men mostly botched their efforts, but the transitions brought a return to the end-to-end atmosphere, further pushing tactical organization to the sidelines.

Madrid’s desperation reached its peak in the final minutes of the match; Ramos became an auxiliary center forward and every player pressed like a madman, causing a lot of unnecessary fouls.

Again, nothing changed, and Barcelona gratefully used the stoppages in play to kill the clock and secure the three points.

The quality of El Clásico has fallen off a cliff this season. Real Madrid’s ill-fated tenure under Lopetegui and the limitations of Solari’s tactical ideas have not been a pretty sight next to Valverde’s own struggles. Consequently, all four matches between the two biggest clubs in the world have demonstrated a subpar level of strategic thinking and an overreliance on individuals, leading to rather bland spectacles. This is not what fans have come to expect from the biggest game in football and everyone is surely hoping for things to change next season.

Real Madrid’s resurgence under Solari, which started with an impressive win over Sevilla and lasted for a month and a half, is surely now over. As good as Vinícius and Benzema have been, and as fine a job as Solari has done selecting young talent and motivating his team, his tactics are just not good enough. Aside from the competent high press, the defensive organization is inconsistent, there are no collective mechanisms in slow possession play, and the team’s press resistance This is an increasingly important trait in midfielders and defenders, particularly in teams playing a possession style of play. It refers to the player, or team, under pressure being able to keep possession and even bring the ball further up the pitch through dribbling or passing. is poor. That final aspect must be resolved if Madrid are to survive a second leg against Ajax in the only competition Solari still has a chance of winning.

Valverde’s performance in this Clásico was not superb, either. Though his switch to a three-man midfield seemed to confuse Madrid’s defensive game plan, his own strategy off-the-ball was questionable at best. He also still needs to find a way to create an offense that does not revolve too heavily around Messi. While leaving that unresolved may not prevent win him from winning another league title, it will likely be exploited in Europe. 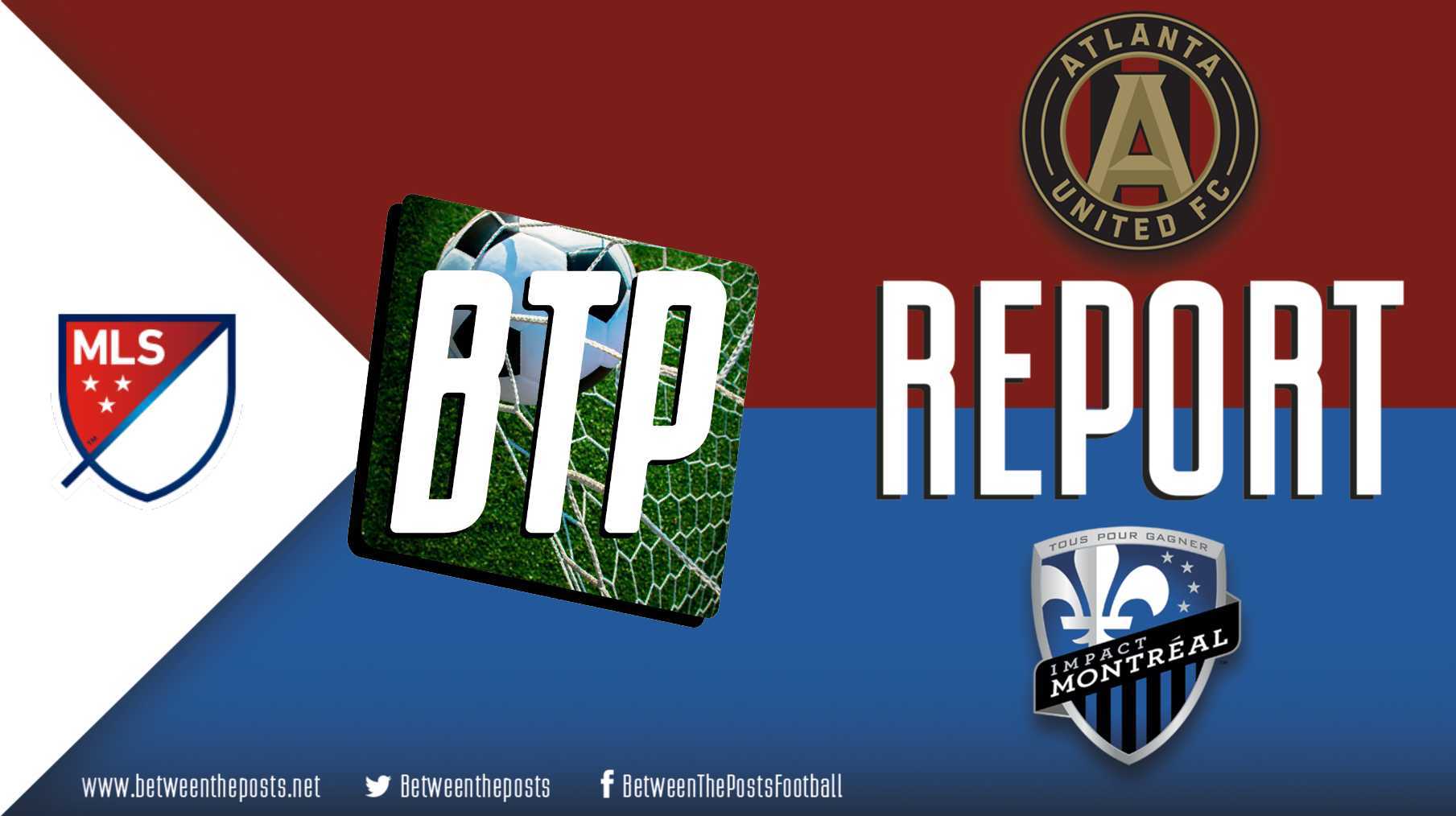 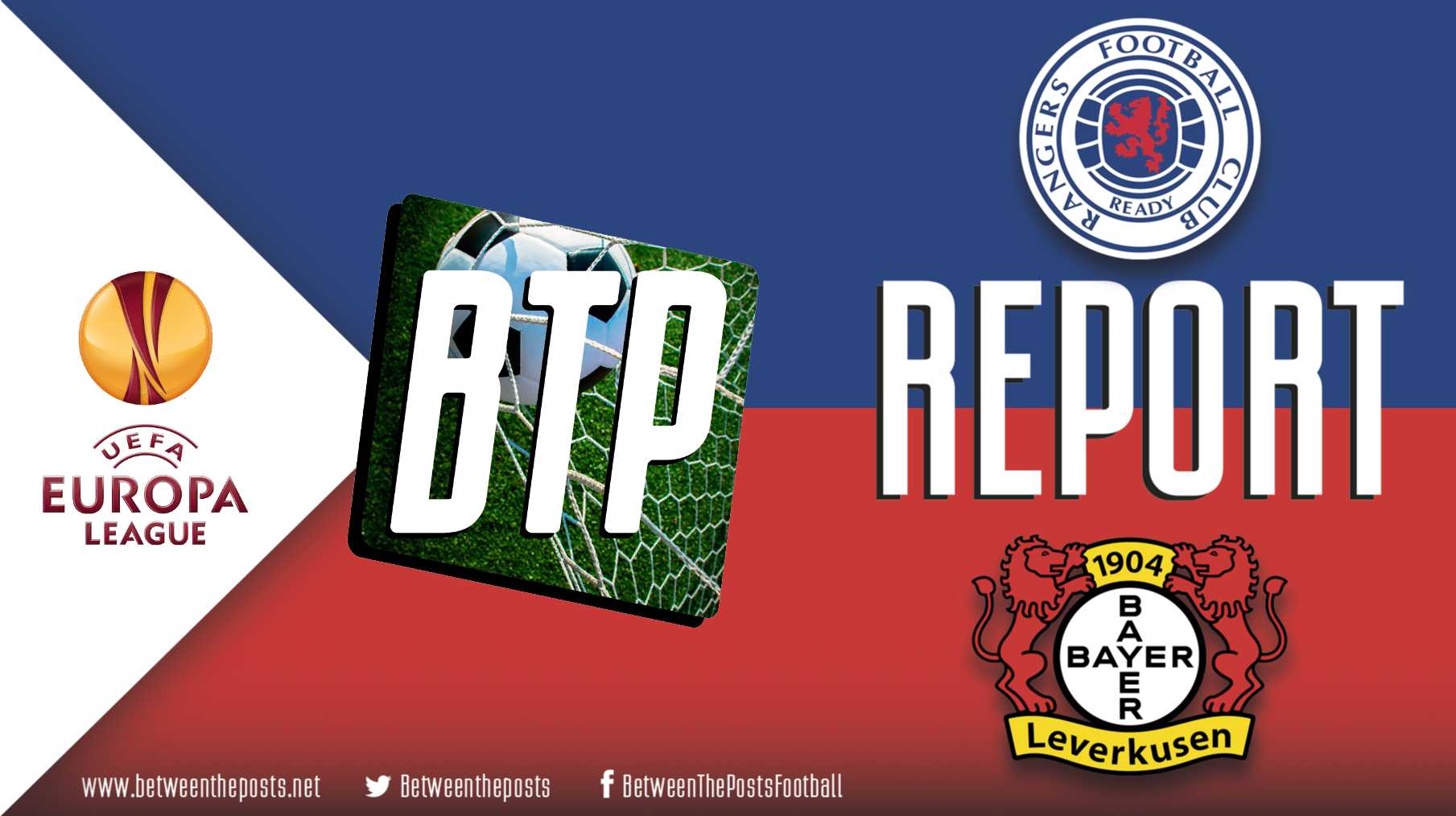