Real Sociedad – Sevilla FC: Despite Januzaj, this was a bad game (0-0)

What do you get if you have two teams who actually don’t like having the ball? You get a lot of bad passes, unnecessary lost possession and a first half with just one (!) goal attempt. Real Sociedad against Sevilla was truly a bad game, a pessimist would even call it dreadful. Teams who want to beat Pablo Machín’s Sevilla might have learned a thing or two.

Question: does the manager of Sevilla love a good puzzle? Well, if you take into account that you have to start a game without your two top strikers who already this early in the season have a combined total of twelve goals. Then the answer is probably ‘no’.

In his search for replacing the injured André Silva and Wissam Ben Yedder, Pablo Machín didn’t manage to surprise. He put Luis Muriel and Quincy Promes up front, holding on to his successful 3-5-2 formation. Simon Kjaer, Gabriel Mercado and Maxime Gonalons sat out with an injury as well, while Real Sociedad missed four players: Joseba Zaldua, Mikel Merino, Martin Merquelanz and the unfortunate Luca Sangalli, who suffered a stroke last Wednesday but is recovering well.

Better news was that Belgian international Adnan Januzaj was again fully fit after a knee injury and started on the right hand side in the 4-2-3-1-formation of Asier Garitano, manager of the home team. Two new and exciting coaches battling it out. What more could you wish for? This was going to be a fun game, right?

Well, it would have been nice if we would have gotten some some actual football in this match. This proved to be a challenge, as both teams were out of their comfort zone last night at Anoeta. Both Sociedad and Sevilla perform at their best when they are able to press the opponent and benefit from mistakes in their build-up by using efficient counterattacks.

Yesterday, both teams were forced to create chances from their own build-up in what was a very balanced game in terms of possession – 51 percent for Sociedad, 49 for Sevilla. The first half therefore was littered with bad passes, misunderstandings between teammates and incoherent offensive movements.

Especially because there was no lack of game plans on display. Garitano knew what he wanted. Against the Sevillian formation with three central defenders, he instructed his team to create an overload When one team has more players in a certain area or zone than the other team. on the sides. During their build-up, right attacking midfielder Mikel Oyarzabal searched the company of Adnan Januzaj on the home team’s right side. Together with the attacking right back Aritz Elustondo, Sociedad wanted to force a breakthrough on that specific wing. Sociedad combined this with a solid amount of pressing the moment the ball was lost, hoping to restart an attack as soon as possible.

The idea was fine, but it did not lead to success. Januzaj showed his skill by pleasing the crowd with some dribbles, during the first thirty minutes Sociedad managed to create one goal attempt. After the entire first half only one shot on target was launched. A shot from distance from Éver Banega. The quick and direct Sevillian playing style with Banega as launcher, Pablo Sarabia and Franco Vazquez as intermediates and Ben Yedder and Silva – or in this case: Muriel and Promes – as finishers was nowhere to be found, and the fact their only shot on target was a shot from distance speaks volumes about their offensive prowess in the first half. 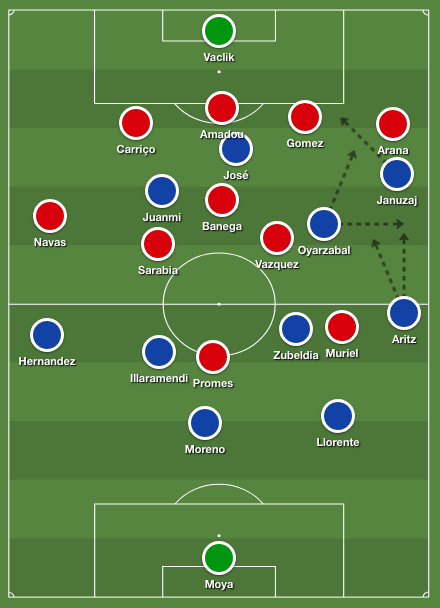 How Sociedad tried to force a breakthrough on the right wing. Vazquez or Gomez watched over Oyarzabal.

After such a dire display, the second half could only be better. It was – praise the lord – a bit more pleasing for the eye, but still not in a way one could get really excited. Machín did came up with a ploy that looked like it could be part a real game plan. The manager asked Jesús Navas to play in a more attacking way, trying to benefit from the fact that Sociedad played without a true left winger.

Up front, Promes and Muriel swapped places, making Muriel a player in support of the running Navas. Sarabia was available too. Illarramendi was forced to help out Theo Hernández several times because Juanmi was not able to cover all the space. Navas often came in a promising position, but it did not lead to any opportunity. 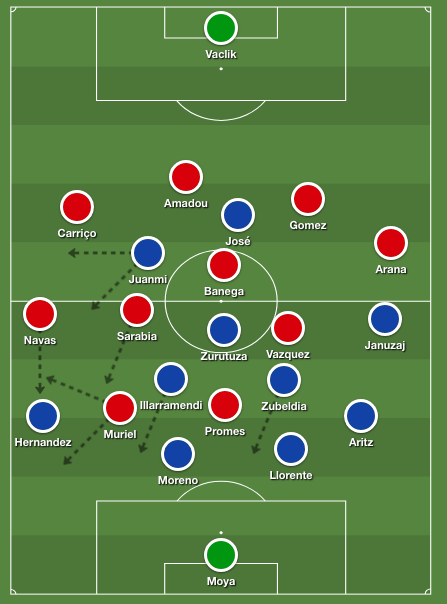 ‘Free man’ Navas helping out Sevilla in the build-up.

When Machín put technician Roque Mesa in the squad – turning Sarabia into a second striker –  Sevilla still did not manage to create a whole lot of offense. The only time they truly came close to scoring was when Sociedad were sloppy in possession and Sevilla could go on a break. This happened twice at the final stage of the game, where Sevilla could have nicked three points away from Anoeta, but didn’t.

Meanwhile, Sociedad suffered from Adnandependencia, hoping the well performing Januzaj could break the deadlock with an individual action. It is not a coincidence that during his absence, Sociedad ‘crowned’ themselves as the team with the least shots in the whole of La Liga.

After a lot of hard work, combative play to keep the spaces as tight as possible and a whole lot of disjointed attacking as a result, the game ended like it started. 0-0 at Anoeta.

It has only been a couple of weeks since Sevilla was leading LaLiga, but that already seems ages ago. Sevilla knows how to perform the art of a great counterattack – they would love to play against Real Madrid every weekend – but does not seem to find the key of what makes a great build-up when they play against opponents who don’t like to have the ball either, like Sociedad.

Asier Garitano’s Sociedad are not the best bunch of players, but able to annoy any opponent when the eleven players on the pitch are in great shape. Unlucky for them, Januzaj seemed to be the only one living up to the expectations against Sevilla. 0-0 was a logical score. A decent result after a bad game. 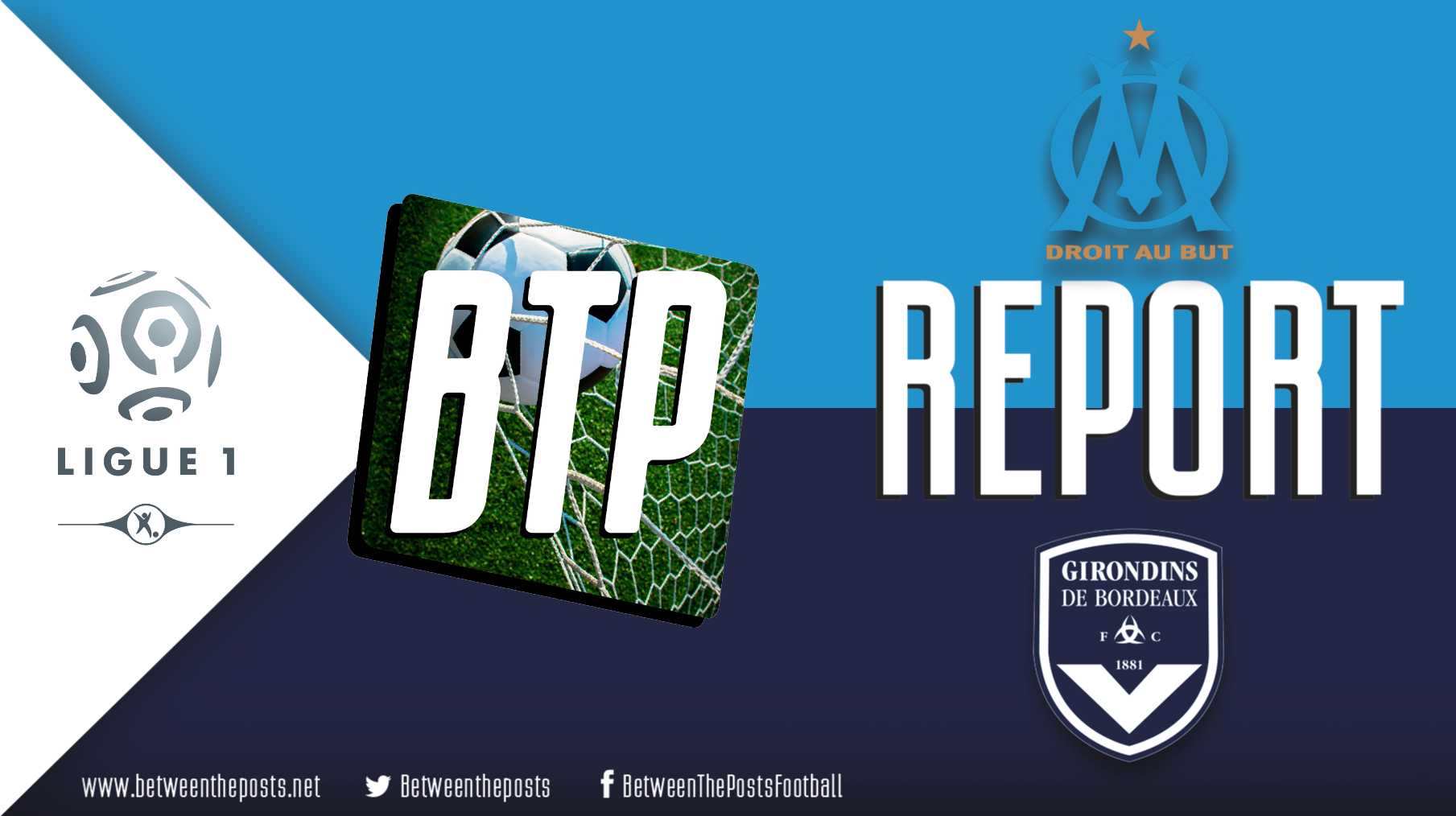 Introducing Between the Posts Membership