River Plate came back to win the Recopa Sudamericana thanks to a more compact and aggressive pressing game. River heavily dominated both halves, preventing Athletico from coming out of their own half of the pitch and thus outshooting them. After 90 minutes of pressure, Athletico’s defense finally collapsed during injury time.

In the first leg, River’s narrow 4-4-2 diamond formation was destroyed by Athletico’s fullback plus winger combinations, forcing them to switch to a 4-3-3 shape. Thus, it came as a surprise to see Gallardo and River start this second leg tie with the same 4-4-2 diamond.

Franco Armani’s goal was once again defended by center-backs Lucas Martínez and Javier Pinola, with fullbacks Gonzalo Montiel (left, replacing suspended Milton Casco) and Fabrizio Angileri (right). In midfield, Leo Ponzio played the holding role, with Enzo Pérez on the right and Exequiel Palacios on the left. Nacho Fernández played at the tip of the diamond, with plenty of freedom to move forward and throughout the attacking front. Up front played the mobile striker duo of Rafael Santos Borré and Lucas Pratto was fielded, the latter constantly drifting wide or coming short to receive in between the lines as needed.

Unlike their opponents, Athletico Paranaense had little incentive to change anything after controlling the first leg. They rested most of their starting eleven over the weekend in the league game against Flamengo and thus played the exact same lineup and 4-3-3 shape as in the first leg. In front of keeper Santos lay a defense of Léo Pereira and Paulo André as center-backs and Jonathan Moreira (right) and Renan Lodi (left) as fullbacks. In midfield, Wellington once again played the holding role, with super prospect Bruno Guimarães and veteran Lucho González in the interior midfield roles. Up front played striker Marco Rubén flanked by Rony on the left and Nikão on the right. When out of possession, the team took a 4-4-2 shape, with midfielder González pushing up to press River’s center-backs alongside striker Rubén.

In the first leg, River’s pressing lacked compactness and, more surprisingly, aggression. Therefore, Athletico often had numerical superiority in their buildup and would often overcome River’s pressing line, giving their attackers plenty of space to threaten the River defense.

River greatly improved the press in this second leg, pushing up with a far more compact block. The key for improvement was the aggressive positioning of central defenders Pinola and Martínez. Both defenders remained close to the halfway line to minimize spaces in between the lines, always ready to anticipate Athletico attackers. And they did an outstanding job at this, constantly intercepting passes (four interceptions throughout the game for each defender), yielding no time and space for rival attackers to receive the ball comfortably or defeating their rivals in aerial duels and second balls. 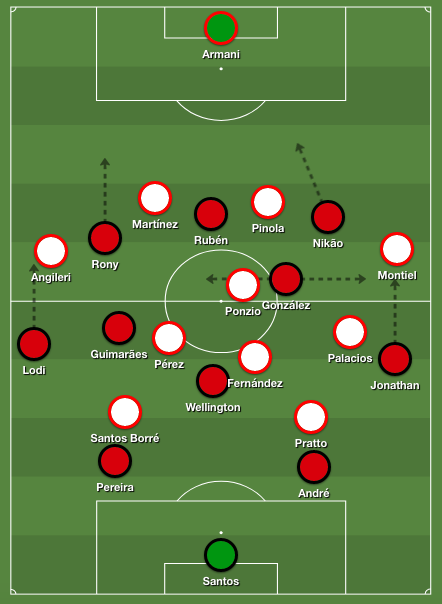 River’s attackers were also intense and aggressive in their defensive tasks. A tireless Santos Borré and Pratto would hound Athletico’s center backs and even goalie Santos, Fernández would harass Wellington. Palacios and Pérez would push up and alternate between pressing the opposing fullback and central midfielders. If Athletico had the ball on their left side, Pérez would press left back Lodi, while on the other side Palacios would cover rival right midfielder González. If Athletico had the ball on the right, roles would reverse, with Palacios pressing right back Jonathan and Pérez covering left midfielder Guimarães.

Meanwhile, holding midfielder Ponzio also pushed up, moving intelligently to support his teammates’ pressing or win second balls. Thanks to Ponzio and River’s compactness, two or even three River players would often collapse on a single Athletico midfielder, preventing the Brazilian side from progressing through midfield. The pressing scheme worked to near perfection, and rarely could Athletico string more than five passes together or even send accurate long balls towards their fast wingers.

River’s recipe to create chances was surprisingly similar to the one used by Athletico in the first leg. Fullbacks Angileri and Montiel were extremely aggressive in their positioning, aiming to drag Athletico fullbacks out wide and create gaps inside Athletico’s defensive line.

These gaps were attacked by the trio of Fernández, Santos Borré, and Pratto. Fernández essentially acted as a third striker for River, constantly switching positions with Pratto and Santos Borré. If Pratto came short to receive the ball in between the lines, Fernández would aggressively run forward to take Pratto’s place up front and pin down Athletico defenders. If Santos Borré drifted wide, Fernández would try to attack the gaps between Athletico fullbacks and center backs that were generated. Thanks to these movements, Fernández had River’s best chance in the thirteenth minute, but his shot struck the post.

Thanks to River’s aggressive pressing, Athletico was completely outshot in the first half, three shots to nine. However, the few times Athletico managed to beat the press, their attackers were very efficient and created great chances. This is why Athletico finished the first half with as many big chances (two) as River, including one that required a spectacular Armani save at the 32nd minute.

Apart from being pushed back by the River press, Athletico also chose to be more conservative in this second leg. Their fullbacks took on deeper, less aggressive positions and their defensive block A defensive block is the compact group of defenders that defends a particular zone, either their own half in a medium defensive block, or the zone around their own box in a deep defensive block. was much lower than it had been in the first leg. However, as River’s pressing game ran out of steam after the 30th minute of the game, Athletico finally started pushing back and racking up passes. Athletico fullbacks were not so aggressive, and the first issues with River’s defense being overloaded When one team has more players in a certain area or zone than the other team. on the wings by Athletico’s fullback and winger combinations could be noted. Fortunately for River, Armani, Martínez and Pinola stood strong in the box, making sure to clear, block or save any incoming danger.

After resting, River was once again ready to press aggressively and keep asphyxiating their opponent. Palacios had to leave due to injury and was replaced by Nicolás de la Cruz. River switched to a 4-2-4 formation, with Pérez and Ponzio staying back, acting as a platform for the constant mobility of the attacking quartet of De la Cruz, Fernández, Santos Borré and Pratto. De la Cruz constantly switched between left and right wings, Borré and Fernández were able to show up on the wings or stay central, Pratto could pin defenders down or come short in between the lines. 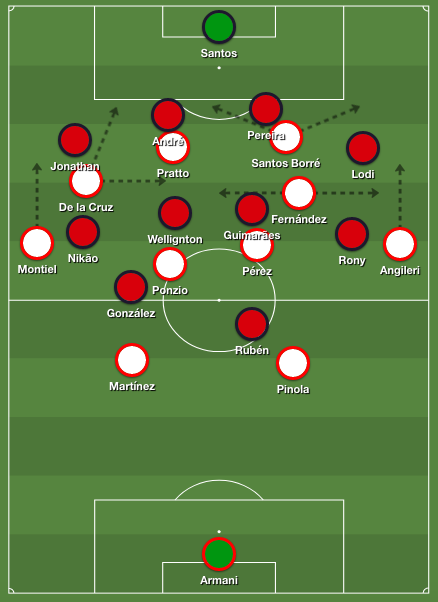 Whenever one of the attackers moved to a new position, another one would take his previous place. Athletico defenders managed to clear out most of the incoming danger, but it seemed like a matter of time before the floodgates opened. And they did at the 65th minute, when a handball by González led to a penalty kick that Nacho Fernández ultimately scored despite the initial Santos save.

After the goal, Athletico tried to react, but they still had no tactical solution for River’s intensity and aggression in pressing. As far substitutions went, they replaced a lackluster Nikão for Marcelo Cirino in the 78th minute, and González for Léo Cittadini, which led to no significant changes in tactics or formation. Athletico were reduced to sending long balls in the general direction of their forwards and hoping for them to win the individual duels against River defenders. This simple approach seemed increasingly likely to work towards the end of the game, as River seemed to finally tire out of their huge physical efforts. Just like last game, it was Athletico’s left wing, Lodi and Rony, who made River’s defense, and especially Armani, with a massive 79th minute save, break a sweat.

The match looked increasingly even, with both teams trading long balls back and forth, as if it was going to extra time, but in the 91st minute, River got their lucky break. Athletico’s Leo Pereira – who had been outstanding throughout this tie – finally made a mistake. He failed to keep track of an incoming long ball, giving Pratto more than enough time and space to control the ball and shoot into the goal. Athletico players rushed forward in a last-ditch attempt at drawing the game and winning the Recopa, but another missed clearance from an Armani long ball led to another goal by substitute Matías Suárez in the 95th minute.

Tactics certainly mattered in this game, but the biggest difference between River and Athletico was more on the psychological and emotional side. River did not change their shape and game plan significantly compared to their first leg, they just executed it much better than before, with the required aggressiveness and intensity.

River and Gallardo reminded us that despite the poor first leg, they are a far more experienced team than Athletico. The Brazilian side are a good team with a well-organized and talented attack who could do damage and create good chances against River’s defense, but neither coach nor players could come up with a good response when River prevented them from getting out of their own half of the pitch.