Russia continued their excellent post-World Cup run thanks to some tremendous motivation, physical intensity and focus. Also key, the inspiration of their attackers: Golovin, Dzyuba and Cheryshev. Turkey, on the other hand, struggled to ‘click’ and display a well-defined offensive plan.

The Russia of Stanislav Cherchesov has a relatively simple game plan. But it is a plan that they execute with intensity, focus and confidence. This has led to a historic display on home soil in the past World Cup, and the team continued their good form in the UEFA Nations League, with a solid away win against Turkey and a draw against Sweden’s tough defense.

Post World-Cup, Cherchesov has focused on a much-needed renewal of the defensive line. Sergei Ignashevitch has retired and Yuri Zhirkov and veteran goalkeeper Igor Akinfeev have left the national team.

As such, Russia’s recent games have featured new names in defense, and this match against Turkey was no exception. Goalkeeper Guilherme Marinato started once again, as well as the new center back pairing of Georgi Dzhikiya and former Schalke player Roman Neustädter. Surprisingly, experienced winger Aleksei Ionov (FC Rostov) kept Denis Cheryshev on the bench. Other than these changes, it was the same Russia we remember from the World Cup, including the 4-2-3-1 lineup and the offensive leadership of playmaker Aleksandr Golovin and striker Artem Dzyuba.

Things are not going so well for Turkey. The legendary ex-Shakhtar Donetsk manager, Mircea Lucescu, succeeded the politically controversial Fatih Terim in 2017, right at the end of World Cup qualification. For a moment Turkey looked like they could turn their fortunes around, but a resounding 0-3 home defeat against Iceland sank any qualification hopes.

Lucescu is now tasked with rebuilding this squad for the 2020 Euro qualification, and he has done so by letting go of veterans like Arda Turan, Nuri Şahin, Caner Erkin and Burak Yılmaz. This renewal was reflected in the lineup against Russia, which featured a 4-2-3-1 formation with an exciting front four. Beşiktaş playmaker Oğuzhan Özyakup revived his partnership with former teammate Cenk Tosun, who is now at Everton.

Hakan Çalhanoğlu played on the left wing and Cengiz Ünder—arguably Turkey’s hottest young prospect—on the right wing. The double pivot 4-2-3-1 is one of the most frequently occurring formations in football. The two most defensive midfielders are called a ‘double pivot’. featured the usual Okay Yokuşlu accompanied by the experienced Mahmut Tekdemir, who is covering for injured veteran Mehmet Topal. 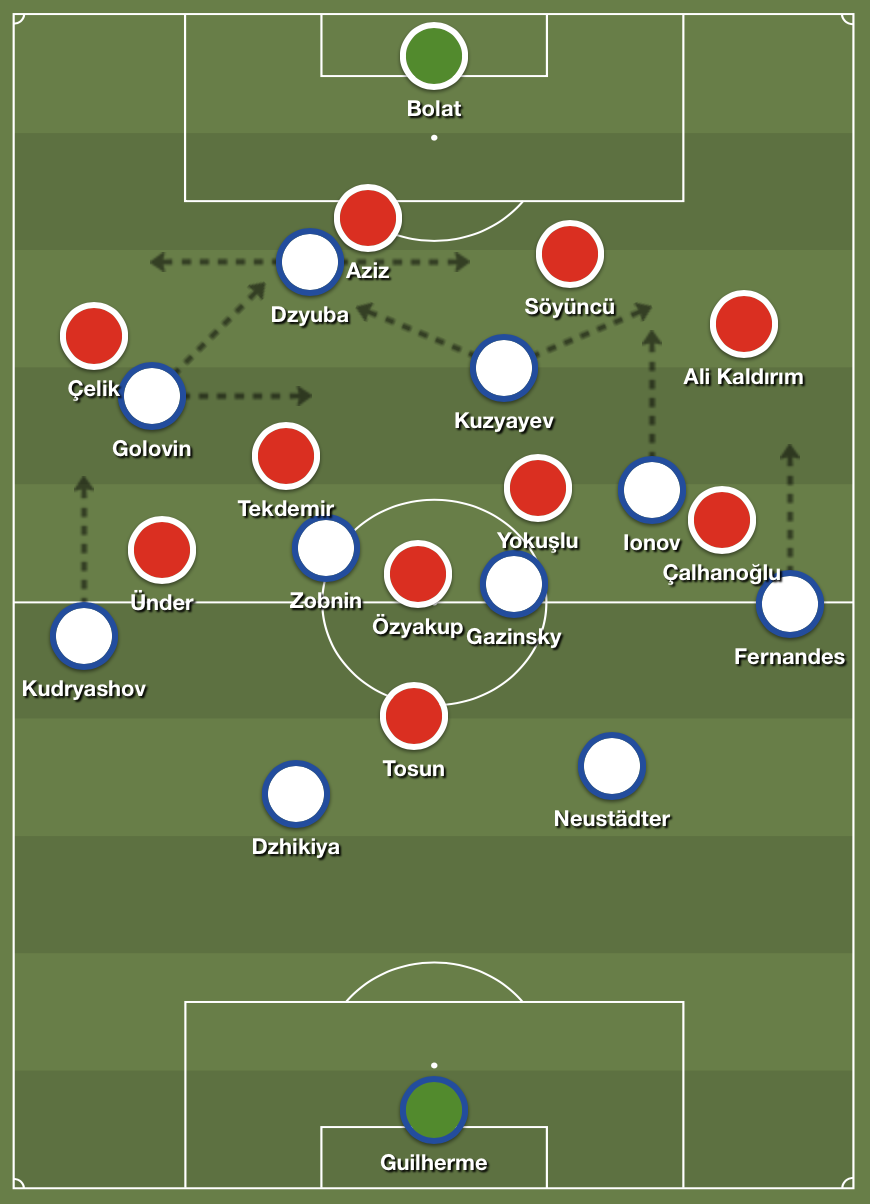 Russia’s initial structure in possession against Turkey’s low block. A low block refers to a team that retreats deep in their own half out of possession, generally only disrupting their opponents around their own box.

This pressing allows Russia to show the richest, more diverse version of their attack. Gazinsky drove forward to link up with Golovin on the left and create overloads with left back Fyodor Kudryashov. On the other side, right back Mario Fernandes ran endlessly up and down the pitch, a constant dagger that pierced the opponent’s left flank.

Right winger Ionov was not particularly dangerous or creative, but he showed why Cherchesov trusts him with a starting position: he just doesn’t stop running. A wonderful asset for pressing or chasing opponents when defending, he often ended up in an even more conservative position than Golovin, Kuzyayev and even his own right back.

As the minutes went on, Turkey started to find solutions for the Russian press and aggression, with Yokuşlu dropping down between the center backs to provide numerical superiority against Russia’s press. Turkey managed to produce a dangerous – but unsuccessful – counterattack around the fifteenth minute.

For a brief moment it looked like they could turn the momentum of the match around, but Russian set piece determination struck at the wrong moment for Turkey. A brilliant strike by center back Dzhikiya after a corner kick bounced off the post right into Neustädter, who simply had to push the ball into the Turkish net to give Russia the 1-0 lead. 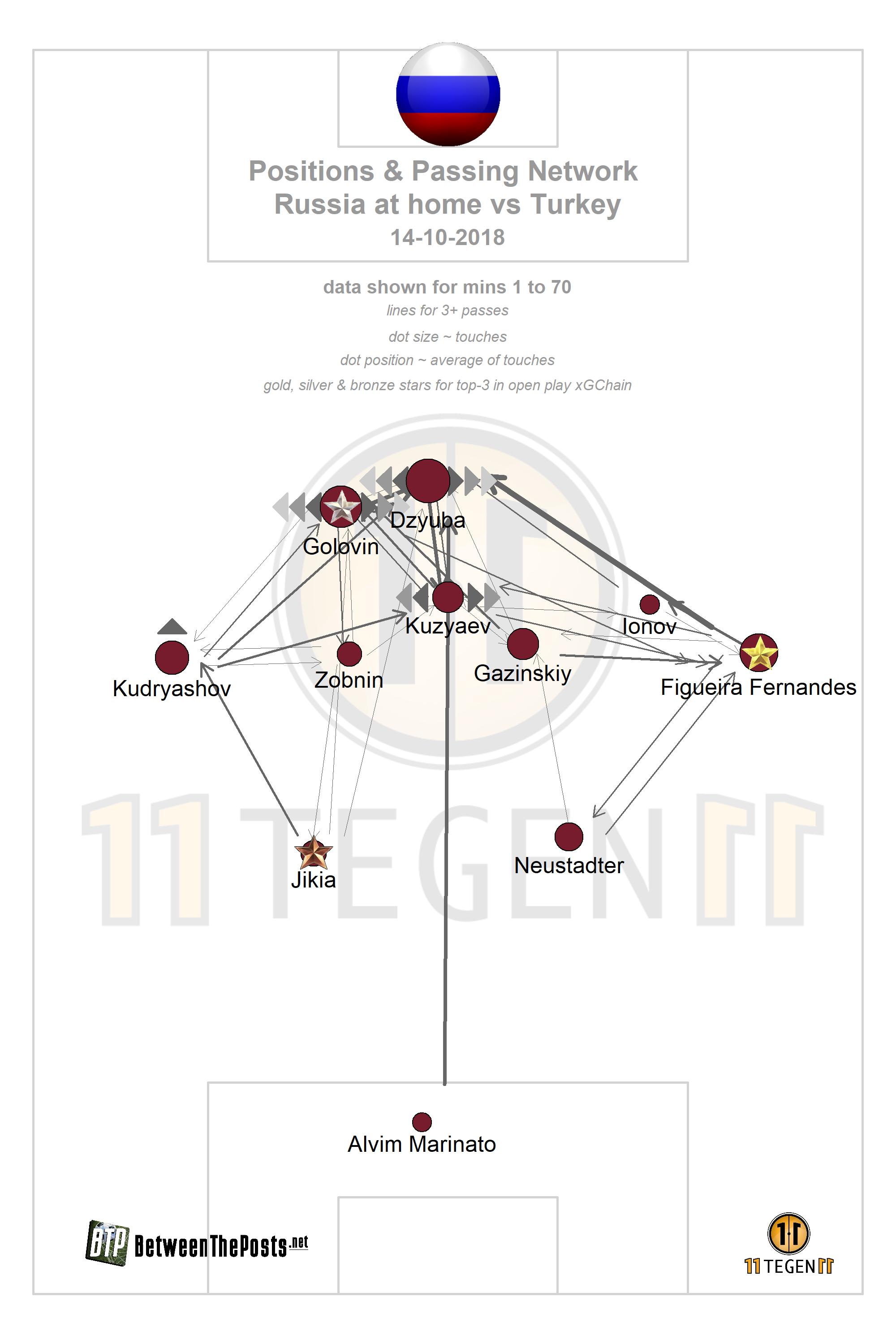 Russia’s passmap illustrates their main methods to progress the ball up the pitch:
fullback distributions and long passes to striker Dzyuba.

Russia’s pragmatism appears
This goal sent the match into its next phase, where Russia showed their pragmatism. They dialed down the intensity of their pressing and shifted to a lower defensive block. Their main modes of attack were Golovin-led counterattacks and long passes to Dzyuba. No matter how deep Russia defended, these two options allowed the team to consistently get near the opponent’s goal.

With more time and space to attack, Turkey attempted to build up good attacks, but constantly failed at piercing the organized Russian 4-4-2 block. In an attempt to stretch the Russian back line, wingers Ünder and Çalhanoğlu often took very wide positions, but in effect this prevented their fullbacks from making overlapping runs. In the middle, the double pivot of Yokuşlu and Tekdemir were as conservative as the fullbacks, rarely joining the attack and supporting Özyakup and Tosun in the center of the offense.

The Turkish attack often looked disjointed and excessively vertical. Ünder and Çalhanoğlu were constantly in numerical and positional disadvantage. Whenever Tosun drifted wide to help them, Russian defenders quickly followed and kept outnumbering Turkish attackers. To make things worse, Tosun’s mobility often meant that there were no Turkish attackers in the box to receive a cross.

Even though Turkey dominated possession, Russia looked closer to scoring. The biggest threats from Turkey’s attack came from individual actions from Ünder, but he was often confined to shooting from a distance or making a brilliant pass that would be caught by the Russian defense.

A more composed and creative Turkey
During the second half, the biggest change for Turkey was not personnel, but tactics. Lucescu adjusted his team’s buildup and offensive game, freeing up the fullbacks to go forward and making Ünder and Çalhanoğlu move into the half spaces and central lanes. Turkey finally found some fluidity and patience on the ball, as the constant mobility of their front four moved Russian defenders out of position and created gaps in the Russian defense. Lucescu further strengthened his team’s position by substituting the more defensive Tekdemir for the more offensive Berkay Özcan, another one of Turkey’s bright young prospects. 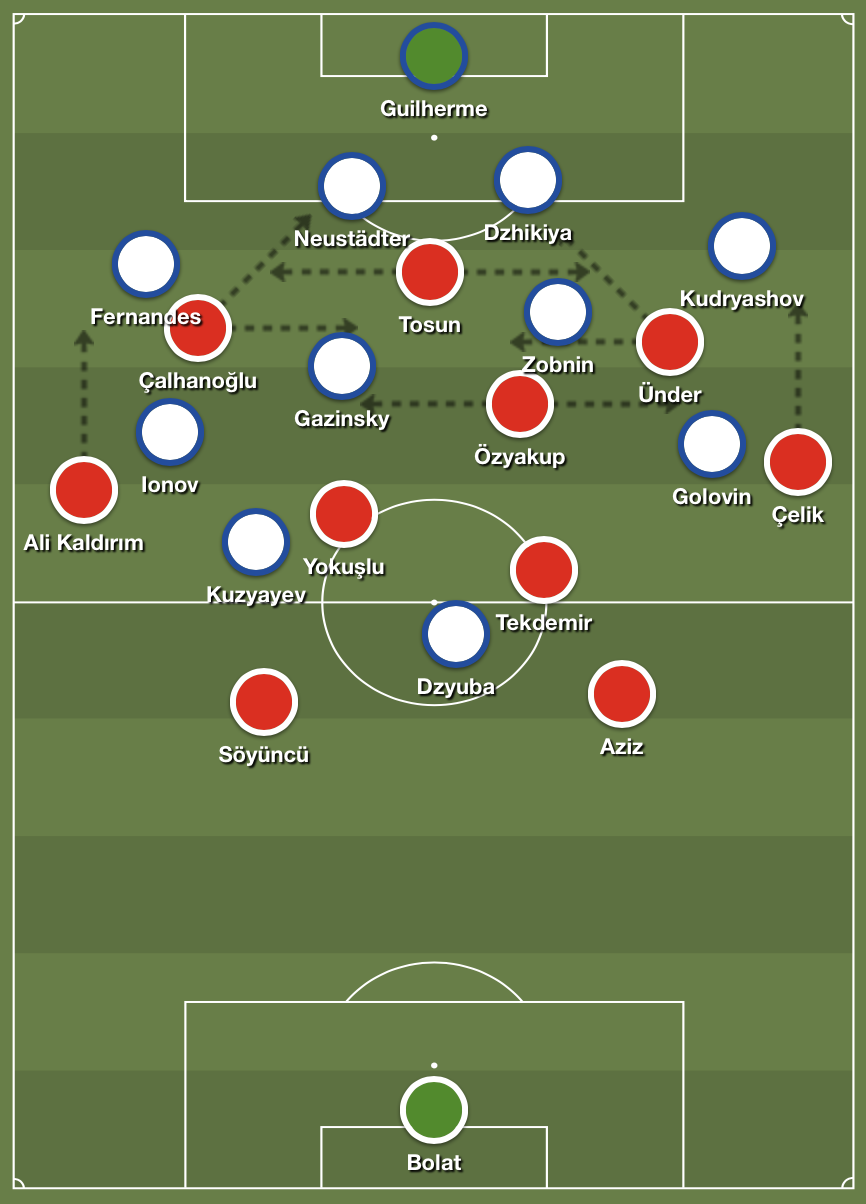 Turkey’s second half structure in possession against Russia’s low block.

The initial Russian offensive dynamism was long gone, as the physical intensity of pressing and defending for sixty to seventy minutes had taken a toll on Kuzyayev, Ionov and Golovin. Other than the tireless Fernandes and his constant forward runs with the ball, Russia had lost too much energy to counterattack well.

Cheryshev puts out the Turkish fire
Fortunately, Cherchesov had kept Cheryshev on the bench for this exact reason. Substituting him on for a tired Kuzyayev proved exactly the spark that Russia needed to reignite the fire. In the 77th minute, Golovin showed that he still had the legs to lead a counterattack, taking advantage of the aggressive positioning of Turkish fullbacks to run forward unopposed. Golovin then produced a low cross that Cheryshev converted in a flash of brilliance reminiscent of the ones we saw from him during the World Cup. After a textbook run to the near post, he struck—on his first touch—a low, driven shot that hugged the post.

The expected goals plot shows how precious little end product Turkey created. The amount of goals a team is expected to score based on the quality of the shots they take.

Lucescu tried to react and renew his attack by replacing a tired Özyakup for another talented attacking midfielder, Yunus Malli, but at this point Turkey was battling a lost cause. They could not attack with the same intensity as before, and Russia constantly won the ball back to start more counterattacks with a rejuvenated Golovin, a smart Dzyuba, and an inspired Cheryshev. They could very well have scored a third goal with some better decision making in the final third.

Takeaways
Russia is still riding the wave of optimism and confidence produced by their stunning World Cup run, and is now very close to achieving promotion to Division A of the Nations League. However, they are far from a perfect team, and without their star attackers—Dyzuba, Golovin and Cheryshev—their attack looks flat and uncreative. However, every Russian player displays an intensity, focus and confidence that allows the team to challenge any opponent in the world. We have no idea how much further this renewed and optimistic Russia can go, but we should enjoy it while it lasts.

As for Turkey, all that is left in the Nations League is the upcoming match against Sweden to avoid relegation from Division B. Staying in the division could be important for the development of this young Turkish team to improve their synergies and to find the optimal offensive mechanisms. Turkey features many talented players on the ball, but they can’t show their quality if the team keeps playing as vertically and impatient as they did throughout most of this match against Russia. 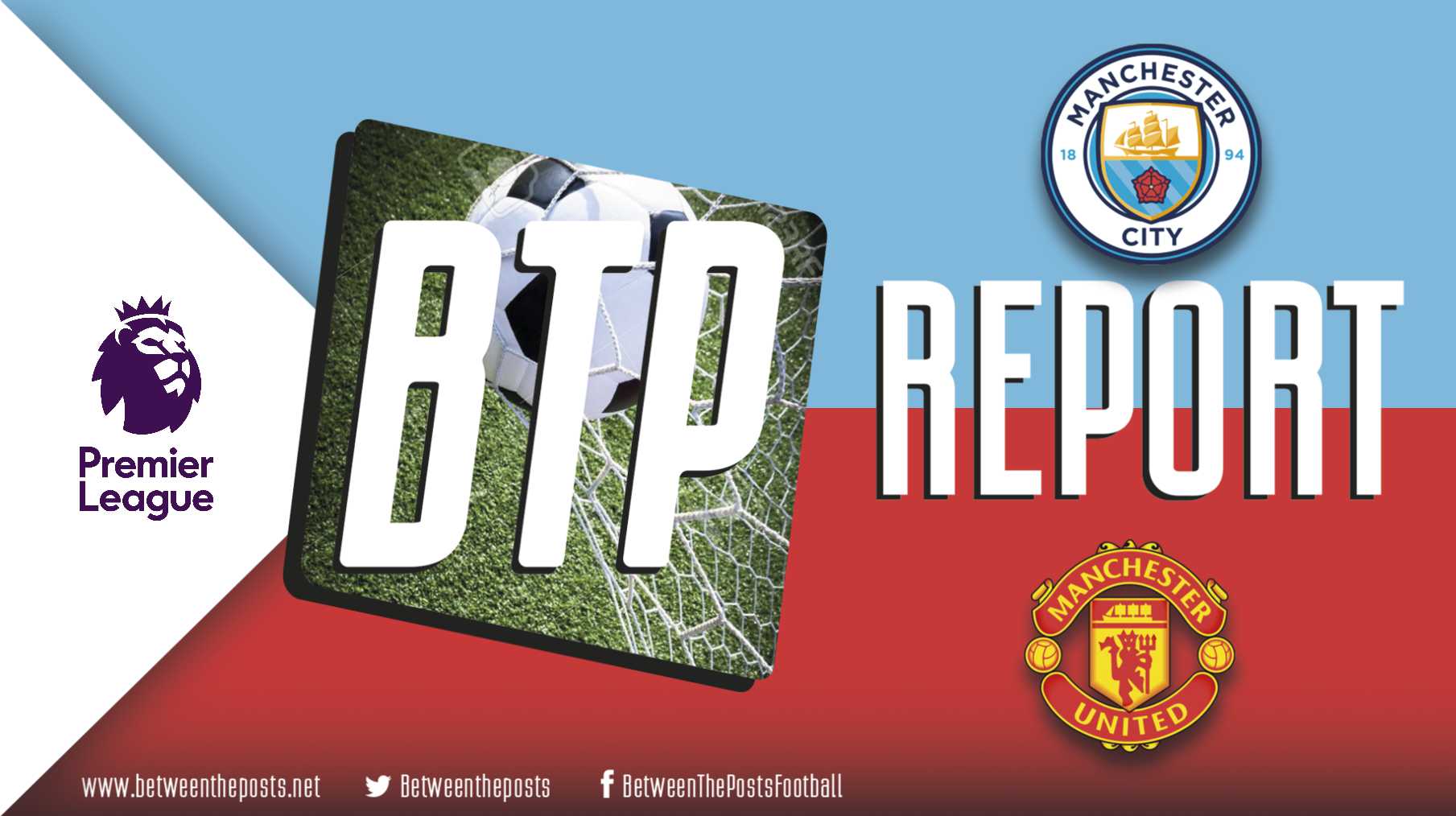 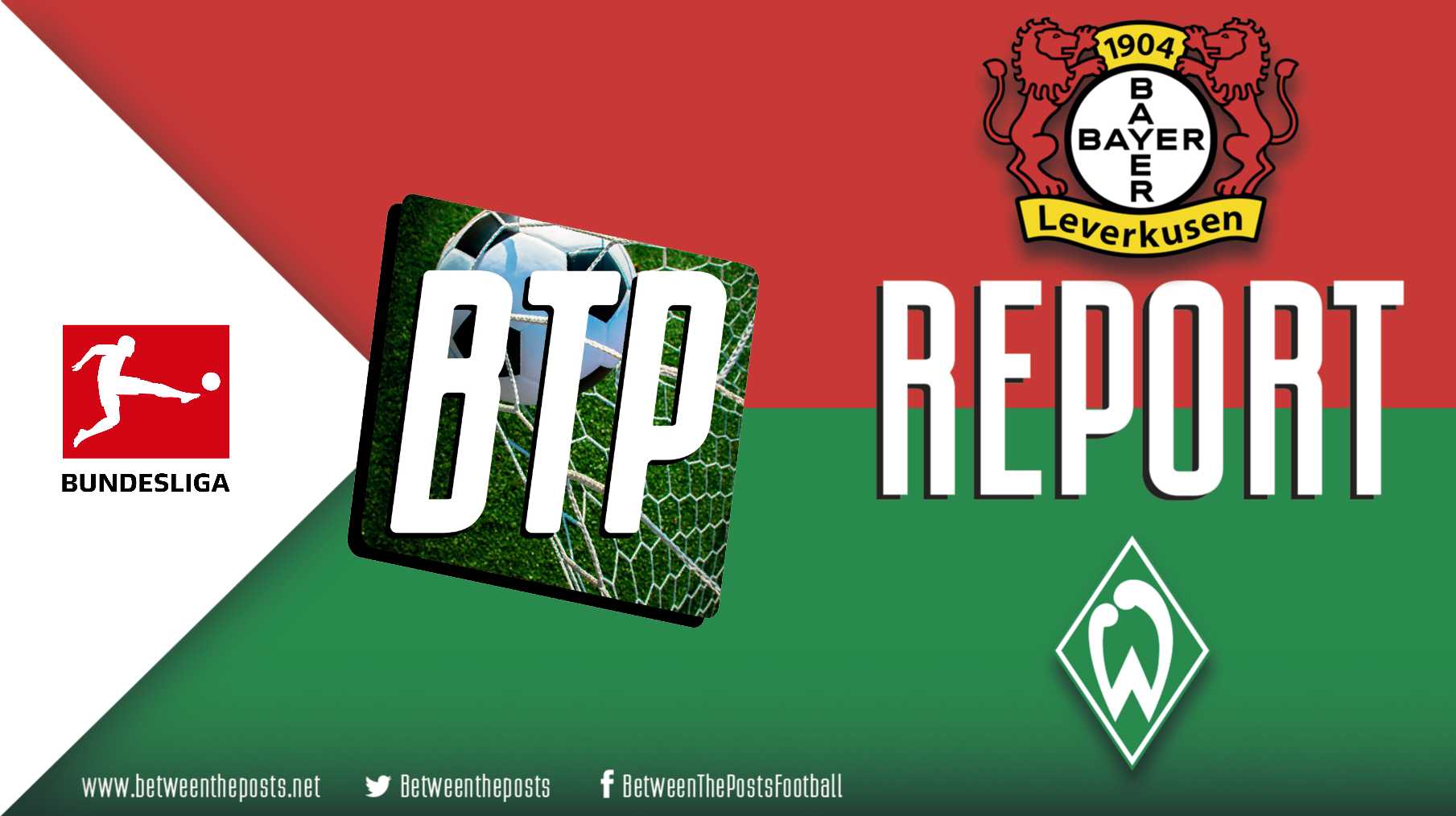