A late VAR call that resulted in a penalty gifted Santos the deserved equalizer, in a game they dominated from start to finish, with the exception of ten decisive minutes. The draw left them two points behind Serie A leaders Flamengo, whom they will encounter in their next fixture.

Santos’ season has been one of ups and downs so far, as they approached the game three points behind their next opponents Flamengo, with a game in hand. Having just bounced back from a three match winless streak through a narrow victory at Chapecoense, the odds backed Sampaoli’s men to build on their win and keep Flamengo off their backs.

Unlike European top leagues, the Brazilian Serie A carries on even during international breaks, which can often cost team points, since it holds the possibility of coinciding with important games or simply being scheduled in inappropriate moments. Because of this, some substitutions on Tiago Nunes’ part were to be expected, it was surprising however to see the manager change the entire starting eleven compared to their win against Grêmio, goalkeeper included.

Athletico Paranaense’s heroic comeback from a 2-0 first leg deficit against Grêmio to qualify for the Copa do Brasil final meant that they would face International just four days after their match against Santos. Accordingly, only being the ninth force in the league and having little to fight for that could outweigh the importance of a final, manager Tiago Nunes was faced with an easy decision to make.

From the very start, Santos were able to cope with the opposition’s structure quite easily thanks to the numerical advantage their back three – spread along the entire width of the field – had over Athletico’s 4-4-2 defensive shape. Moreover, one of the pivots would position himself behind the two strikers, enabling the fullbacks to afford even more freedom in wide areas.

This was only one of the trump cards Sampaoli’s men could benefit from, since the pressing also gave them the chance to force long balls and control possession by winning the second ball. Santos’ pressing was man-oriented and focused on keeping the ball in central areas, causing the visitors numerous problems when attempting to build from the back. An example of Athletico’s struggles was the goalkeeper’s straight pass to Marinho while attempting to reach the fullback in the seventh minute. The Santos winger was just standing in the box when he was gifted a free pass from Léo and, before he knew it, he had a clean shot on goal that was only blocked by a miraculous last-ditch endeavor from the defender. 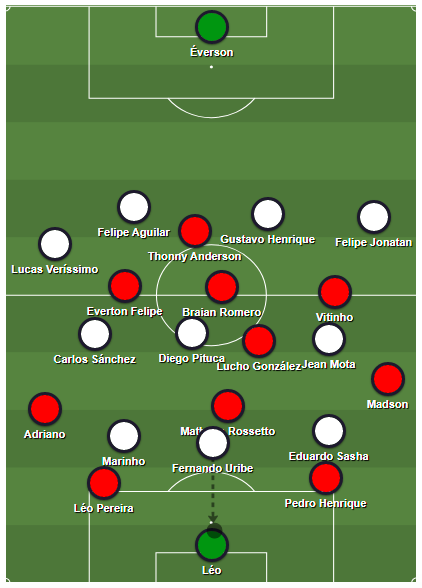 The two wingers in Santos’ 4-3-3 formation pressed the center-backs, while the striker marked the defensive midfielder. One player from the front three would also step onto the goalkeeper if a backpass to him was made. Meanwhile, Felipe Jonathan, the nominal wing-back in Santos’ 3-4-3 possession shape, slid back into the defensive line to form a back four. 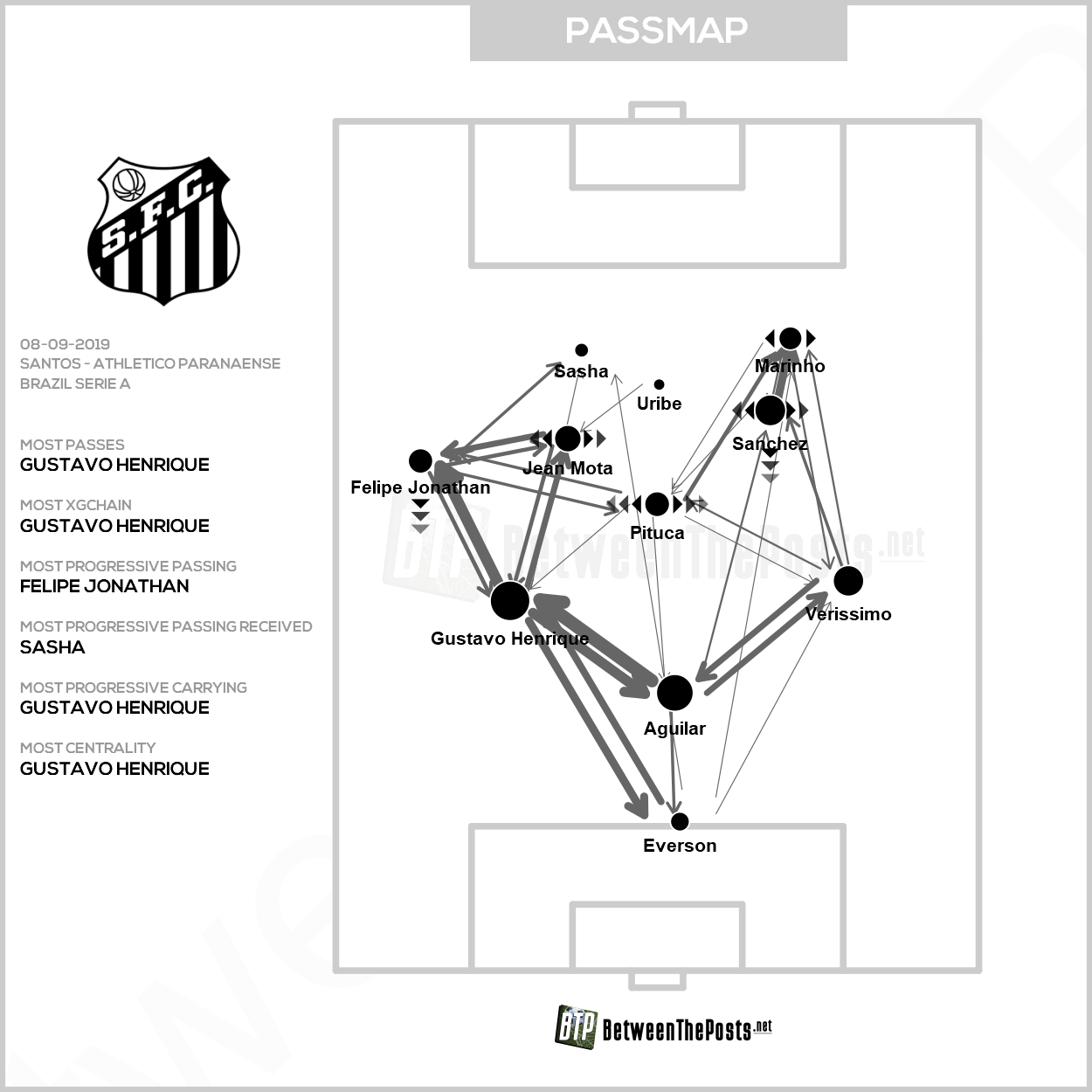 Silent but not absent

Although Santos pretty much controlled the game from a defensive point of view, on the ball, despite their upper hand in buildup, they were unable to create dangerous situations. If a fullback received in space, he would often recycle the ball back instead of taking the initiative to move it forward. Furthermore, when the ball was progressed into midfield, the Athletico midfielders quickly closed down their opponents.

Therefore Santos’ approach also became quite direct, although unlike the visitors, they had control over their intentions and looked to find the wide and high wing-back on the left side and winger on the right wing. In possession, width on the left side was provided by the fullback with the winger inside, whereas on the right it was the winger who remained near the touchline.

The first Santos progression through their opponent’s lines was not incidental and coincided with when Gustavo Henrique, the center-back on his team’s strong buildup side, took matters into his own hands. After receiving the ball from the middlest center-back, instead of routinely passing it back, he carried it forward and was able to find midfielder Jean Mota between the lines. Even though the action itself did not lead to a shot, it acted as a prelude to future intentions, from which the home side was progressively able to access the halfspace If you divide the field in five vertical lanes, the halfspaces are the lanes that are not on the wing and not in the center. Because there is no touchline like on the wing, players have the freedom to go everywhere. But this zone often is not as well-defended as the very center. This makes it a very valuable offensive zone to play in and a lot of chances are created by passes or dribbles from the halfspace. and space between the lines.

Just as Santos seemed to be growing into the game, Athletico Paranaense stepped up and took control of a match that had been pretty one-sided up to the 30th minute. By attracting the opposing midfield line deep, the visitors were either able to open up space between the lines for combinations or isolate a winger in a one-versus-one against the fullback. The opening goal, for example, was the result of the situation described above.

Vitinho, freed in a one-versus-one against Lucas Veríssimo, passed the ball to a midfielder on the edge of the box, who, in turn, assisted Thonny Anderson in the penalty area. The striker scuffed his shot but luckily for him, teammate Braian Romero pounced onto the ball to tap it into an open goal.

The goal was followed by a true  siege by Santos, that lasted the entire second half. As could have been expected of a Sampaoli team, Santos played very high up the pitch and counterpressed After losing possession, a team immediately moves towards the ball as a unit to regain possession, or at least slow down the pace of the counterattack. very well. In total, this segment of the match saw them make thirteen shots, five of which in target, whilst only allowing just one, and control 72% of the ball.

Santos achieved their second half dominance through intensity in and out of possession and by obsessively searching for the wingers through long balls or quick switches. Despite not being the best solution in some cases, through their sheer intensity, when they lost the ball they regained it back immediately either by pressing high or counterpressing second balls – an aspect they had struggled with during the first half.

Santos virtually neutralized Athletico’s possession game, however, their clear cut-chances from open play were very few considering the dominance of the ball. On set pieces, though, goalkeeper Léo was the game changing factor with his incredible saves. 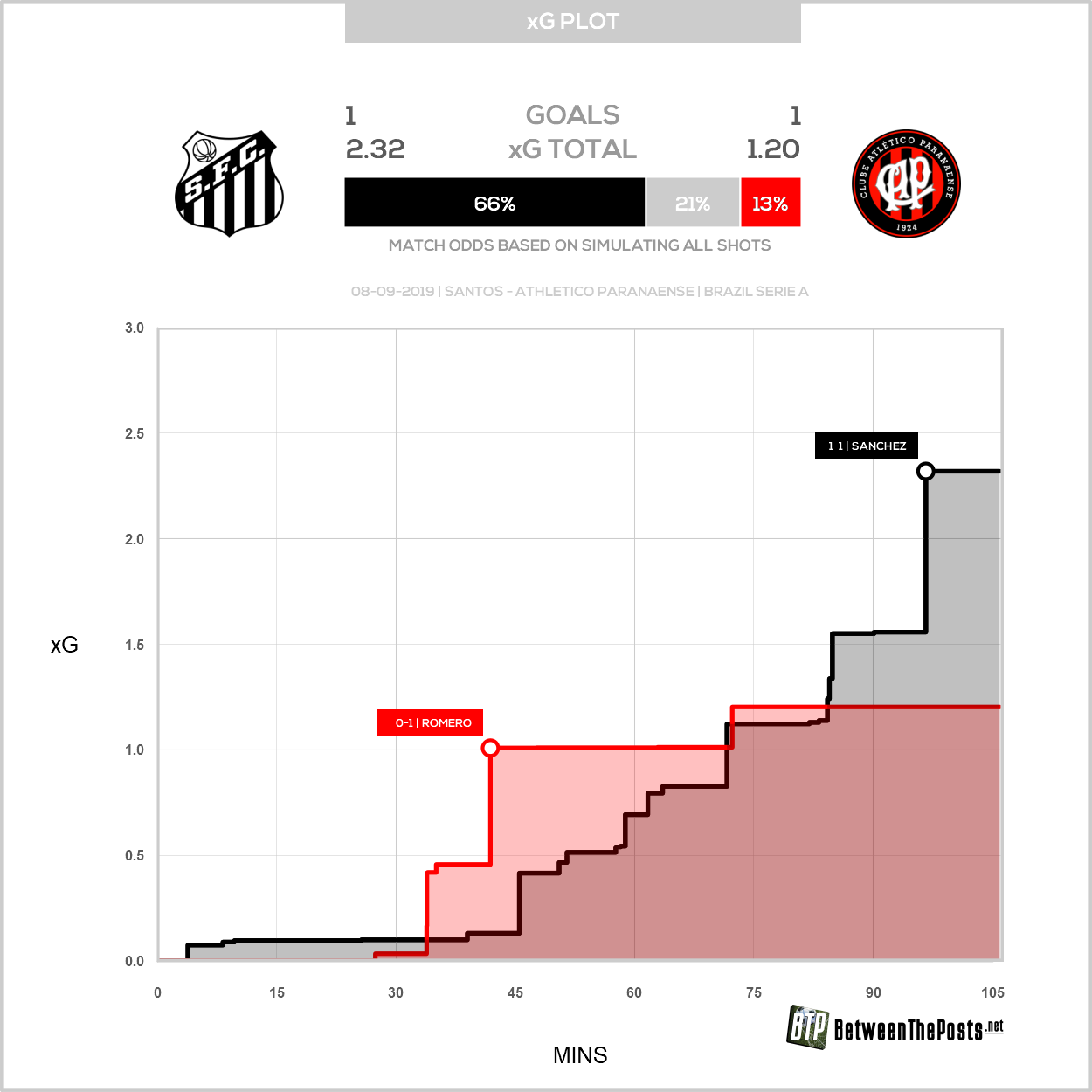 As they say, better late than never. Santos won a penalty in injury time to settle the score on 1-1, perhaps ending the game with some regrets given how the game had evolved. Ten minutes from Athletico Paranaense were enough for Santos to crumble and wake up in a losing spot, having to chase a game they had controlled for the most part.

A team’s strength also resides in their reaction to adversity. The way Santos dominated the second half is certainly a good sign from a mental standpoint. Tactically, though, Sampaoli’s team were quite predictable, lacking a variety of solutions from which to pick when complications arose. This way, their attacks were quite monotone and rarely put the attackers into good positions to score.

Ultimately, both teams ended the game with regrets. Athletico were very close to snatching a win on a difficult away ground and Santos now have to face Flamengo with the risk of ending five points behind them in case of a loss. Being still halfway through the league campaign, a loss wouldn’t be decisive in the title race, but the spot they find themselves right now is one Santos should have avoided, and that Sampaoli will not be happy about. 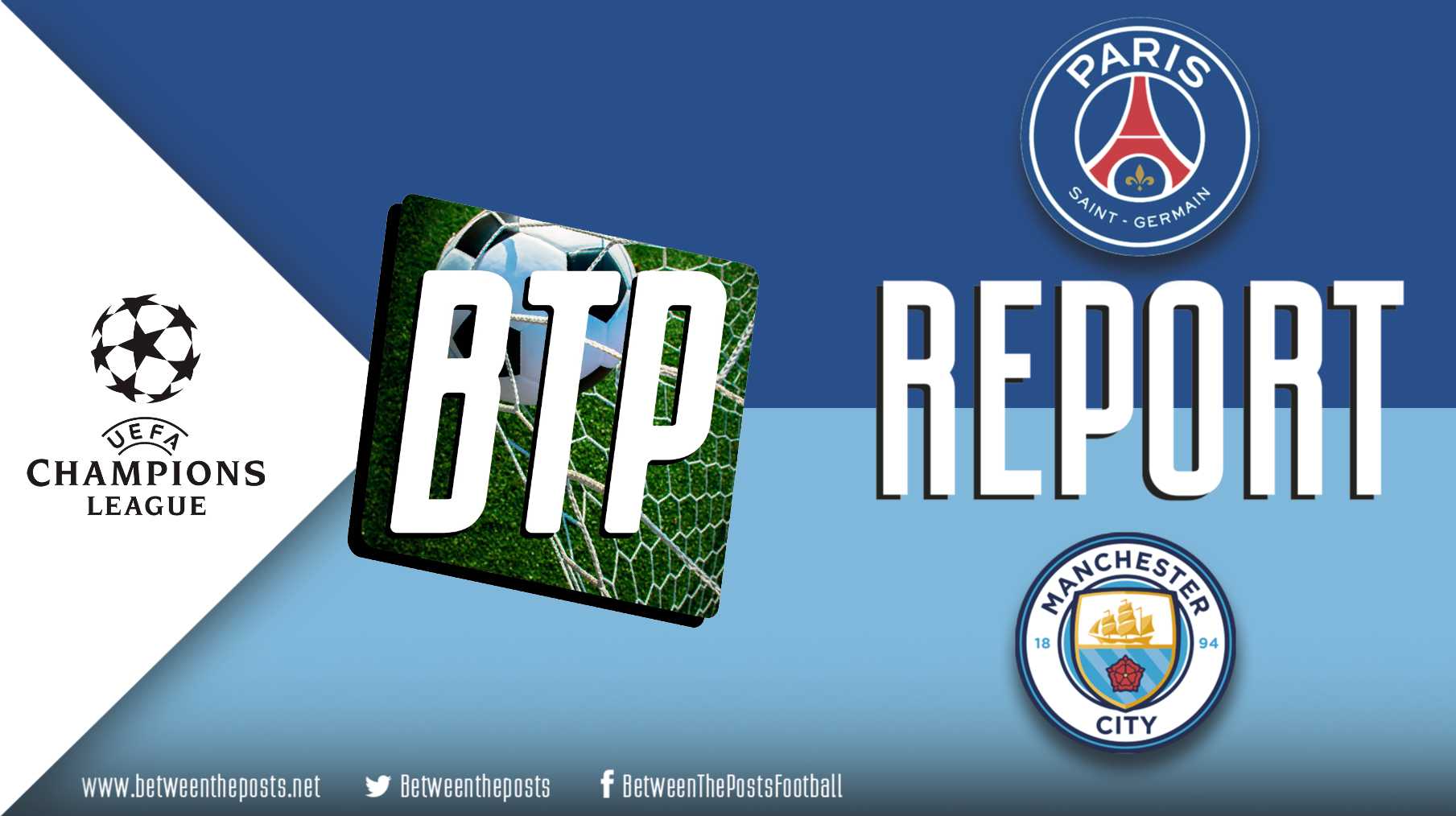