The match between São Paulo and Corinthians is an important matchup between two sides that are fighting for the Copa Libertadores places. The first four places qualify directly for the competition, while places five and six have to go through qualification rounds. São Paulo currently sits in fifth position, three points behind Corinthians. European Leagues are pausing their competitions during international break, but not the Brasileiro. Therefore, both managers had to play without their called-up players.

Compared to their 0-0 draw at Bahia in midweek, São Paulo manager Fernando Diniz changed his team in three positions. Right back Juanfran was substituted with an injury in the last game and was not able to play – he was replaced by Igor Vinicius. Center-back Robert Arboleda replaced Anderson Martins and striker Pablo Felipe missed out on the squad. Therefore, Alexandre Pato started in the central position and Vitor Bueno came in as the new left winger in the 4-1-4-1 formation.

Corinthians drew their last game in midweek, too. Manager Fábio Carille made two changes to his starting formation, as Matheus Jesus and Gabriel Girotto started in central midfield in the 4-1-4-1 shape. Vagner Love and Clayson played as wingers and Mauro Boselli started as the central striker.  The back-four was unchanged.

São Paulo dominates possession, but is unable to create chances

In the buildup against Corinthians’ medium block, A medium block refers to a team that retreats in their own half out of possession, generally only disrupting their opponents some way into their own half. defensive midfielder Luan Santos dropped back between the center-backs to form a three-chain. Left interior Liziero played deeper than his right counterpart Hernanes and positioned himself in front of the opposition’s midfield, while the former Brazilian international played between the lines more often. Bueno and Tchê Tchê were named wingers in the lineup, but moved inside to search for spaces between the lines. Tchê Tchê dropped even deeper several times to receive the ball in the center of the pitch.

Through this formation, São Paulo created numerical superiority in the center of the pitch and moved the ball forward. Corinthians defended in a compact 4-1-4-1 shape and focused on denying passes between the lines. They did well in this regard, but lacked access to the ball. They were not able to pressure their opponents and dropped back without the need to do so quite often. As a consequence, they had to defend in a low block A low block refers to a team that retreats deep in their own half out of possession, generally only disrupting their opponents around their own box. for the majority of the first half.

In their attacking game, Diniz’ side focused on the left side of the pitch. Left back Reinaldo moved up, while right back Vinicius stayed in a deeper position most of the time. Bueno moved inside and looked for spaces between the lines, mainly in the left halfspace. If you divide the field in five vertical lanes, the halfspaces are the lanes that are not on the wing and not in the center. Because there is no touchline like on the wing, players have the freedom to go everywhere. But this zone often is not as well-defended as the very center. This makes it a very valuable offensive zone to play in and a lot of chances are created by passes or dribbles from the halfspace. Liziero was also positioned in the left halfspace, but deeper. With Pato, Hernanes and Tchê Tchê supporting this triangle in the center, they looked to combine their way through the defense with combinations, but were not able to ultimately break through. 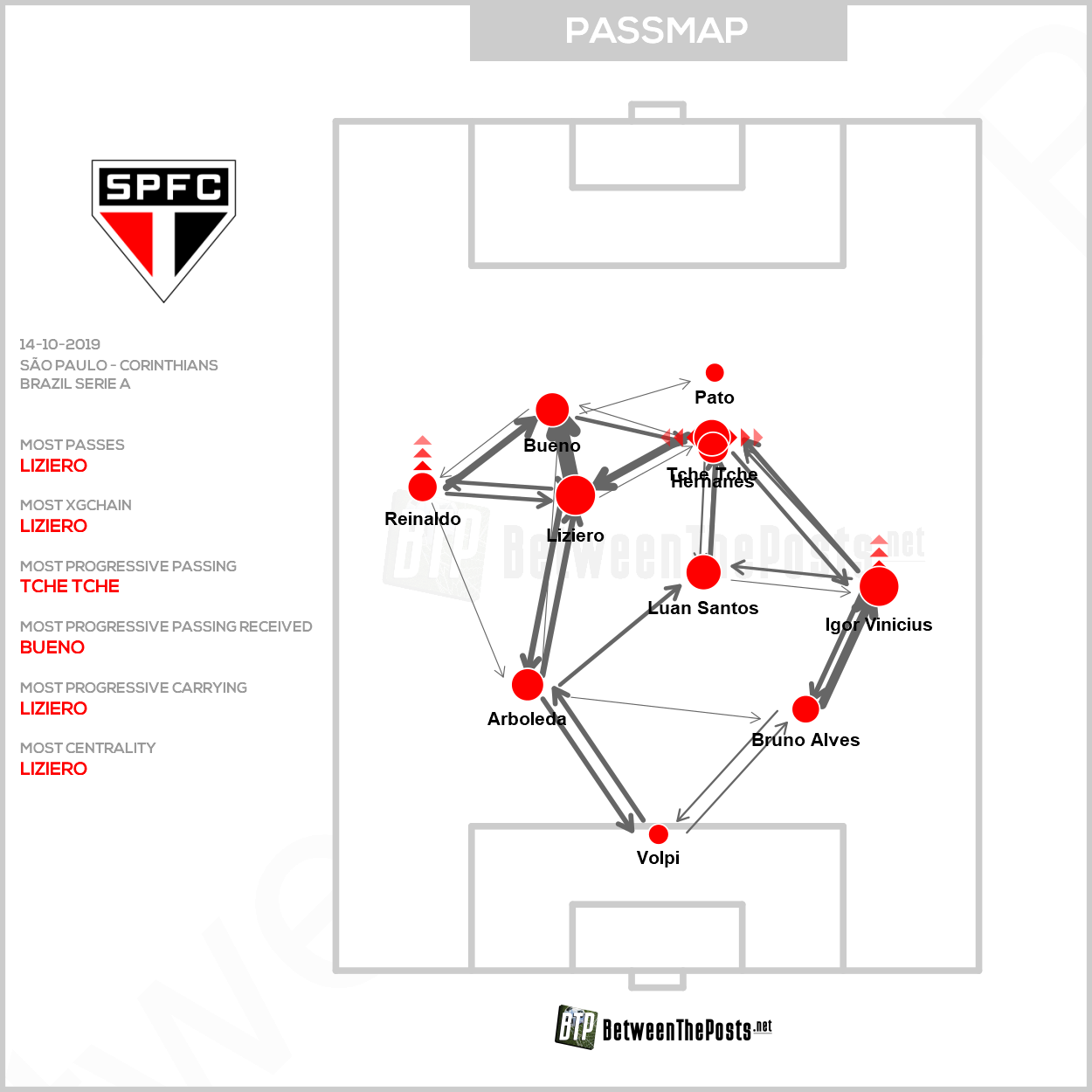 São Paulo’s offense suffered from a  lack of players that go into depth. All strikers dropped back between the lines, none of them made runs behind the backline. Neither did the fullbacks or central midfielders. This resulted in a harmless attack with lots of long shots. To underline this, São Paulo had eight shots in the first half and all of them came from outside the box.

Corinthians had longer possession spells as well, but were even more harmless than their opponents. Both center-backs are not good passers, a buildup that relied on these skills would not be successful. For that reason, fullbacks Danilo Avelar and especially Fagner stayed deep and received a lot of passes. This resulted in a classic 4-1-4-1 / 4-3-3 shape in possession, with wide wingers and a midfield triangle in the center of the pitch.

São Paulo used a 4-1-4-1 medium block A medium block refers to a team that retreats in their own half out of possession, generally only disrupting their opponents some way into their own half.against the ball. The central midfielders played man-oriented, the buildup therefore was guided to the wings. Diniz’ side then showed problems in their shifting, as Pato moved up to mark the center-back while the winger pressured the fullback. With the central midfielders being deeper because of their man-orientations, Luan Santos was free in the center. 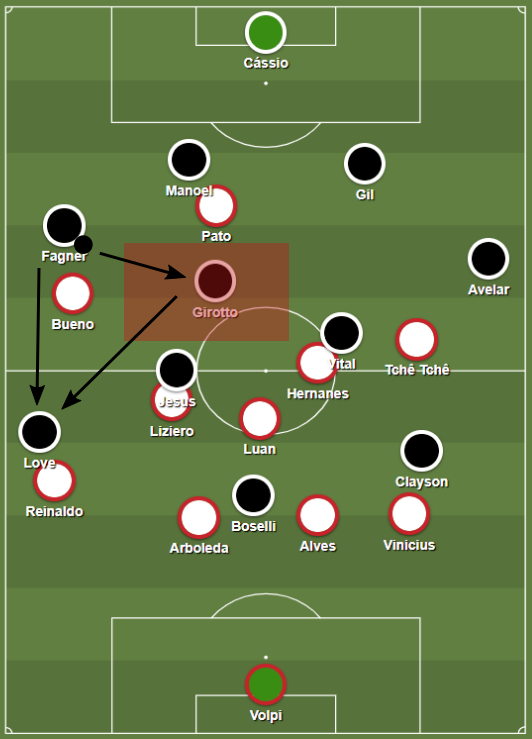 Corinthians buildup was very wing-focused. They could not profit from São Paulos’ weakness as well. That led to a lot of turnovers after passes to the winger.

Usually, Corinthians should have been able to profit from this weakness, but their own structure in position was too flawed. They next passes were often played to the wingers who had opponents right behind them. That led to a lot of turnovers and the fact that Corinthians only had two shots in the entire first half.

Changes at halftime on both sides

Both managers could not have been happy with the way their teams played in the first half. It did not come as a surprise that both Fernando Diniz and Fábio Carille adjusted their tactics at halftime. Corinthians started with a more active approach against the ball. They used a high block A high block refers to a team that regularly leaves their own half out of possession, to disrupt their opponents far into the attacking half. to create turnovers in the opposition’s half. However, their pressing was bad and therefore outplayed by São Paulo regularly. Out of their 4-1-4-1 formation, the players moved up against their direct opponents to pressure them in a man-oriented fashion but the timing was problematic. They regularly were too late and São Paulo combined their way through the press with ease.

The changes on São Paulo’s side saw a more wing-oriented attack. Both wingers stayed wider and were supported by the fullbacks. To the ineffective attacking strategy (long shots) they used in the first half, São Paulo now added a second ineffective strategy: crosses. The problem was that they were now able to break through the wings, but the box was not occupied when the cross came in several times. And even if a cross found a teammate in the center, the shot was not dangerous at all.

As both teams remained harmless through the second half, it became more and more unclear how any of them would be able to score a goal. This question was than answered in the 66th minute. São Paulo recovered the ball in their own half and started a counterattack. A one-two between Bueno and Hernanes created the first big chance of the game, Manoel stopped it with a foul though. The following penalty was converted by Reinaldo.

After the goal, Corinthians had their first longer possession spells of the second half. However, they were not able to create any danger. The central midfielders – especially Matheus Jesus – were poor in their ball progression. They were neither able to receive the ball nor play passes forward. Therefore, the only way forward was through the fullbacks. However, the fullbacks alone are not able to break down a defensive block and therefore the attacks ended with crosses. 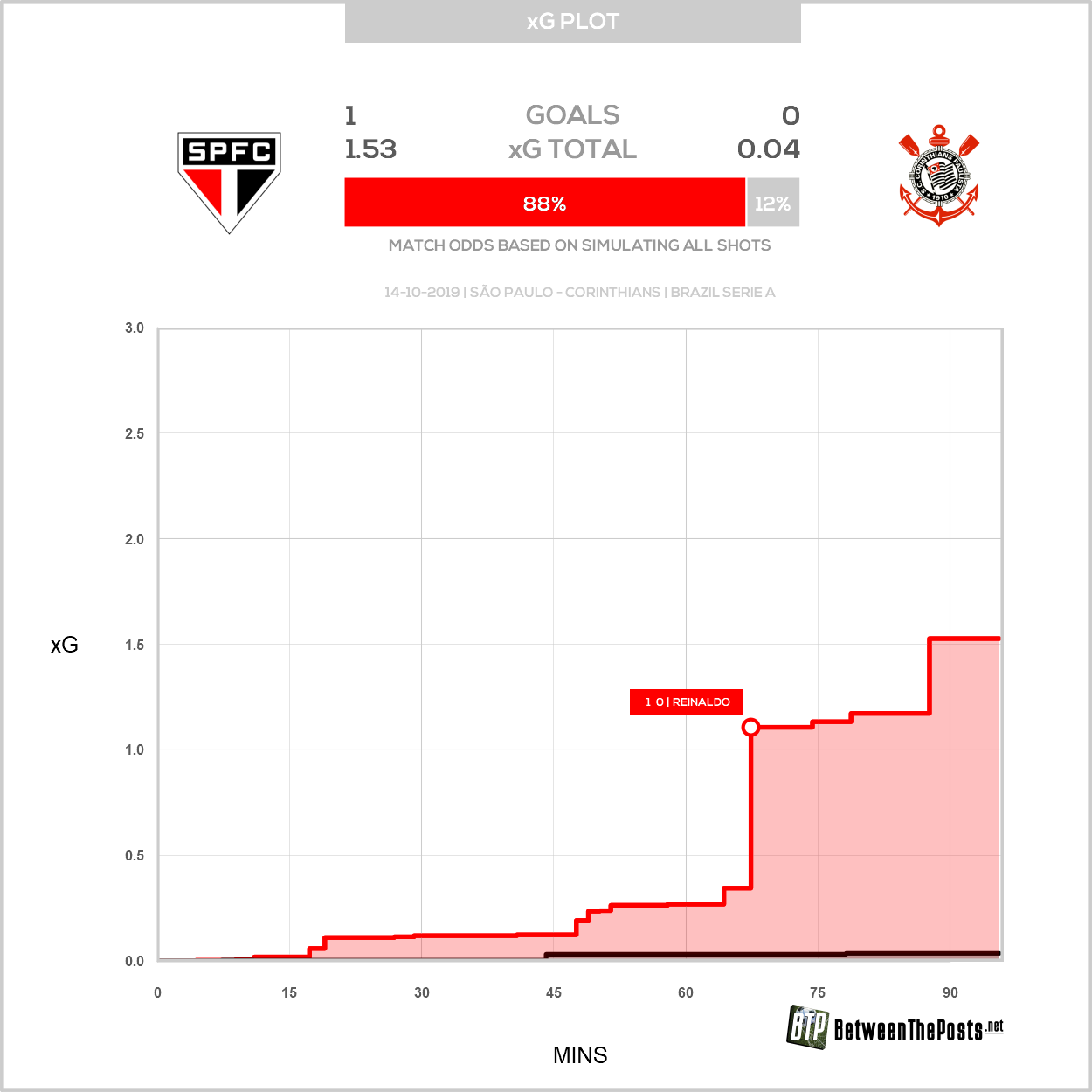 São Paulo made a smart decision in not only focusing on their defense, but taking longer possession spells. They were able to combine their way through their opponent’s uncompact pressing. Fábio Carille made a late change with a switch to a 4-4-2 formation that remained without an impact. São Paulo won the match and are now level on points with Corinthians in the fight for the Copa Libertadores places.

This match has seen as little as possible goal scoring opportunities a football match can have. If it were not for the penalty, the game would likely have ended 0-0. São Paulo actually showed nice sequences with good combinations, but the attacks lacked depth – especially in the first half. They did better in this case in the second half, but relying on crosses is an ineffective strategy if not applied smartly.

Corinthians however were completely disappointing in this match. They had a proper defensive compactness at the expense of access to the ball and the opportunity to create turnovers. Their possession game was harmless, as their three shots that add up to 0.04 xG show.

The international break cannot be used as an excuse as both teams only missed one player each. As the league table shows, both teams are focusing on a compact defense this season as they both conceded only sixteen goals after 25 matches – the best record in the league. Of all the teams that still have a respectable chance of qualifying for the Copa Libertadores, São Paulo (26 goals) and Corinthians (27) have the least goals scored. If they want to increase their odds to finish in one of the first four places, they should work on that aspect.