Another lackluster Borussia Dortmund performance resulted in them dropping points once again, drawing for the third consecutive time in the Bundesliga. SC Freiburg adapted out of their initial low-block, to put pressure on Dortmund’s backline, coming back twice from behind, to get a deserved result at the Schwarzwald-Stadion.

SC Freiburg went into this game having enjoyed the best start to a Bundesliga campaign in their history. Third in the table, with thirteen points prior to this match-up, Freiburg have asserted themselves as the surprise package in the early stages of the season.

Christian Streich has used multiple formations during his eight years at Freiburg but has found recent success in the 3-4-3 system. Playing in this formation enables Streich’s team to build up on the flanks, but they prefer to use long balls to progress up the pitch.

Borussia Dortmund are currently in their worst league ranking since Lucien Favre was appointed as manager. Their leaky defense has held them back in eighth place, dropping points against both Werder Bremen and Eintracht Frankfurt, despite leading in both games.

Favre, of course, lined Dortmund up in a 4-2-3-1 formation; making just two changes to the team that beat Slavia Prague in midweek – Julian Brandt and Jadon Sancho being replaced by Mario Götze and Thorgan Hazard.

Dortmund attempt to play through the low-block

As almost every match has started under the Favre era, Borussia Dortmund had possession and were comfortably distributing the ball across the middle third. Dortmund did not face any issues from Freiburg’s 5-3-2 low-block, A low block refers to a team that retreats deep in their own half out of possession, generally only disrupting their opponents around their own box. although progressing the ball into the final third The one-third of the pitch that is closest to the opposition’s goal. proved difficult as Streich’s team made the area very compact and blocked passing lanes successfully. 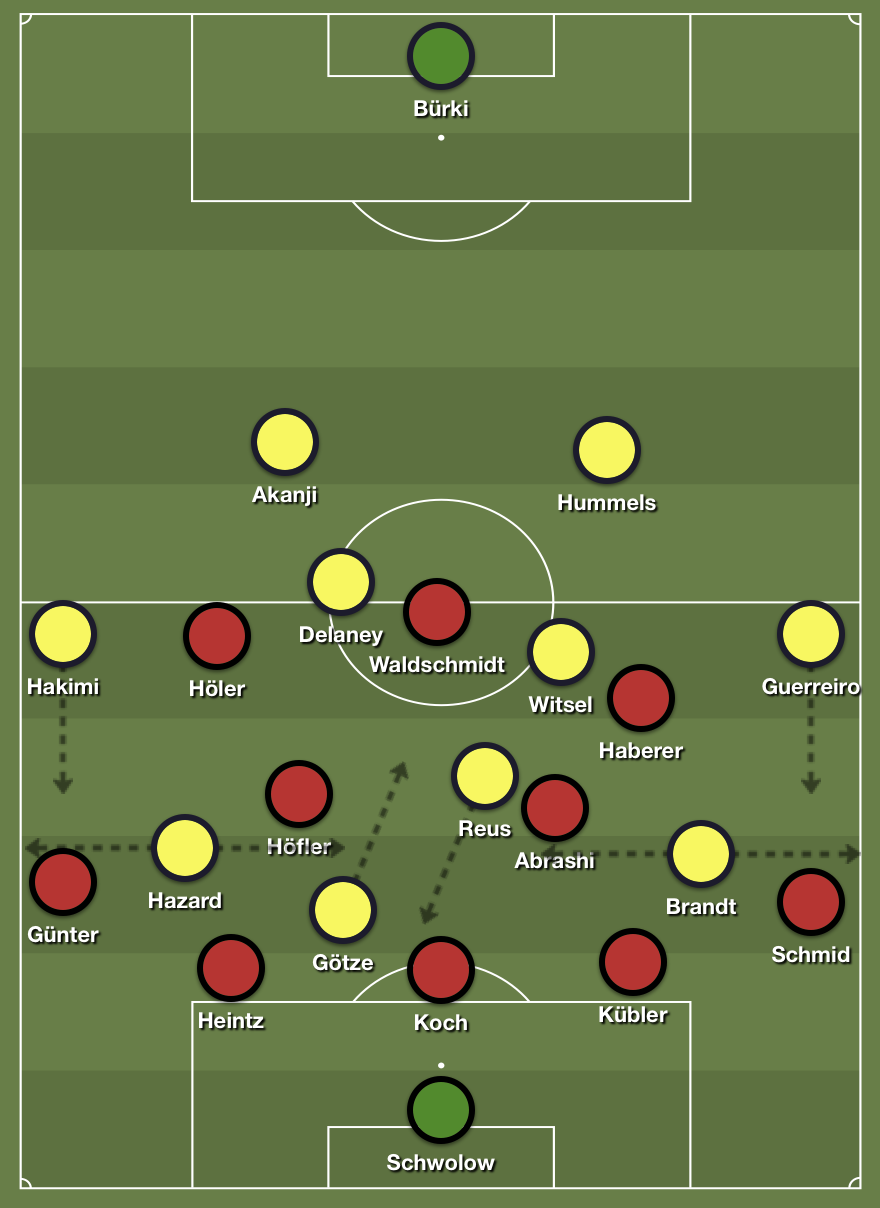 Dortmund’s frontline would see plenty of possession thanks to their interchanging runs and close support. Mario Götze and Marco Reus worked close with each other, both could drop deep to receive possession and swap positions in attacking transitions. Thorgan Hazard and Julian Brandt, who had replaced the injured Łukasz Piszczek early on, could drop more central or move out wide in the buildup, giving Dortmund a good amount of options when progressing the ball.

Freiburg did not press in their low-block, which resulted in their defensive third being as compact as possible. Although Freiburg stopped Dortmund from taking direct shots at goal, the high amount of pressure resulted in them conceding a high number of corners.

It would be from a set-piece that Borussia Dortmund broke the deadlock. Hazard’s out-swinging corner would be met by fellow Belgian Axel Witsel. A thunderous volley, through the crowd, beating the goalkeeper, no words could do it justice. One of the goals of the weekend for sure.

It was inevitable that Freiburg had to break out of their low-block to get themselves back into the match. After going a goal down, they pressed high up the pitch, aiming to pin Dortmund in their own flanks and isolate the player’s passing options around them. 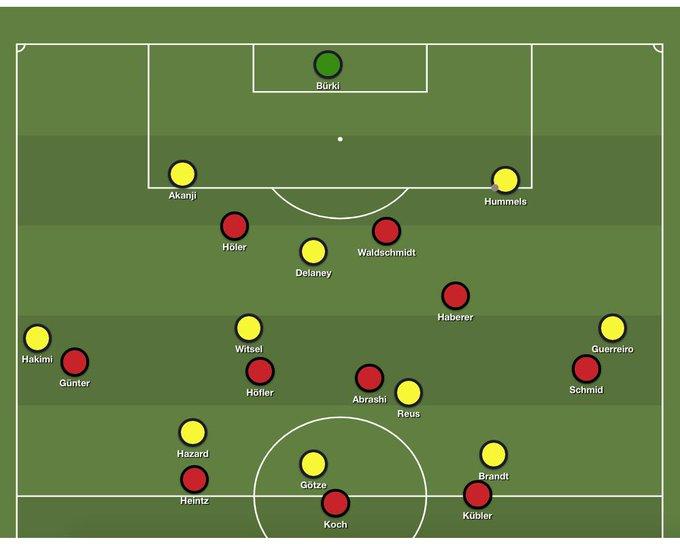 Freiburg moving into opposition half, pinning Dortmund to the flanks.

The positioning of their forwards was dependent on where the ball was on the pitch. Both Janik Haberer and Lucas Höler could angle their positions, disconnecting the Dortmund center-back from making a vertical pass back to either of the double pivot. 4-2-3-1 is one of the most frequently occurring formations in football. The two most defensive midfielders are called a ‘double pivot’.

Dortmund had to drop deeper in passing sequences. Despite keeping the majority of possession, Favre’s team would cheaply lose possession, creating plenty of loose balls for the likes of Christian Günter, Haberer and Höler to recover. Dortmund had the ball, but to say they were in control would be misleading.

Passing had become predictable and they failed to increase the tempo in order to break Freiburg down. An important stylistic change from the hosts.

Freiburg established a decent passing structure to give them a bigger presence in the middle third. Neither team made any tactical changes, but Freiburg’s passing was more direct and aiming to progress in the halfspace. If you divide the field in five vertical lanes, the halfspaces are the lanes that are not on the wing and not in the center. Because there is no touchline like on the wing, players have the freedom to go everywhere. But this zone often is not as well-defended as the very center. This makes it a very valuable offensive zone to play in and a lot of chances are created by passes or dribbles from the halfspace.

Once the Dortmund frontline was beaten, space developed on the flanks for Freiburg to move in and exploit. Freiburg would get their equalizer, thanks to building up in these areas; Haberer dragging Mats Hummels out of position and Luca Waldschmidt unmarked as he finished off a brilliant passing move from Freiburg.

Building a better passing structure and moving further up the field had one flaw for Freiburg. When losing possession, they would lose their team shape and Dortmund were bound to break through with the attackers on the field. Thorgan Hazard was replaced by Jadon Sancho, and it was not long before Sancho helped Dortmund back in front.

Freiburg dealt with Mario Götze’s ball towards the penalty area, but their defensive line was way too central and Sancho made the pass out wide to an overlapping When a wide player, most of the times a wing-back, runs outside to fill in the space left by a winger going inside with or without the ball, this is called overlapping. Achraf Hakimi. Hakimi’s strike deflected, but enough to go in to give Dortmund an important lead with twenty minutes left on the clock.

Another goal forced both teams to make changes. Dortmund reverted to a 4-4-2 medium block A medium block refers to a team that retreats in their own half out of possession, generally only disrupting their opponents some way into their own half. while Freiburg switched their formation in search for points. Streich made all three of his substitutions in the final quarter of the match, Roland Sallai, Nils Petersen and, eventually, Vincenzo Grifo all coming on to create an attacking 4-4-2 formation.

Streich changes Freiburg into a 4-4-2 formation.

Freiburg lost their passing structure as a result, but the substitutions meant they had more options in the final third. The hosts crossed the ball into dangerous areas of the pitch in desperation, without troubling Dortmund’s backline.

Eventually, Rolan Sallai crosses the ball from the right flank towards the back post. Manuel Akanji fails to clear the ball, and Grifo’s driven ball towards goal is deflected off the Swiss center-back. Another lead bottled by Dortmund, a third consecutive 2-2 draw for Lucien Favre.

SC Freiburg did not create the quality or quantity they would have liked against a leaky Dortmund defense; however, they did deserve something here. Their change of tactics from the first goal on was crucial in getting them back into the game, against a team that they have struggled against for so many years. The result leaves them level on points with the league leaders, as well as three other teams. Who knows where this strong start may take them?

Borussia Dortmund’s start to the campaign must be bitterly disappointing. They maybe two points off the rest of the pack – at the time of writing – but a leaky defense, prone to being pressed, as well as issues in buildup; their self-proclaimed title hopes already look in tatters. Matches after the international break will be crucial, Borussia Mönchengladbach and the Revierderby are the next two for Dortmund, as well as a Champions League match against Inter in between. A huge October awaits Lucien Favre. 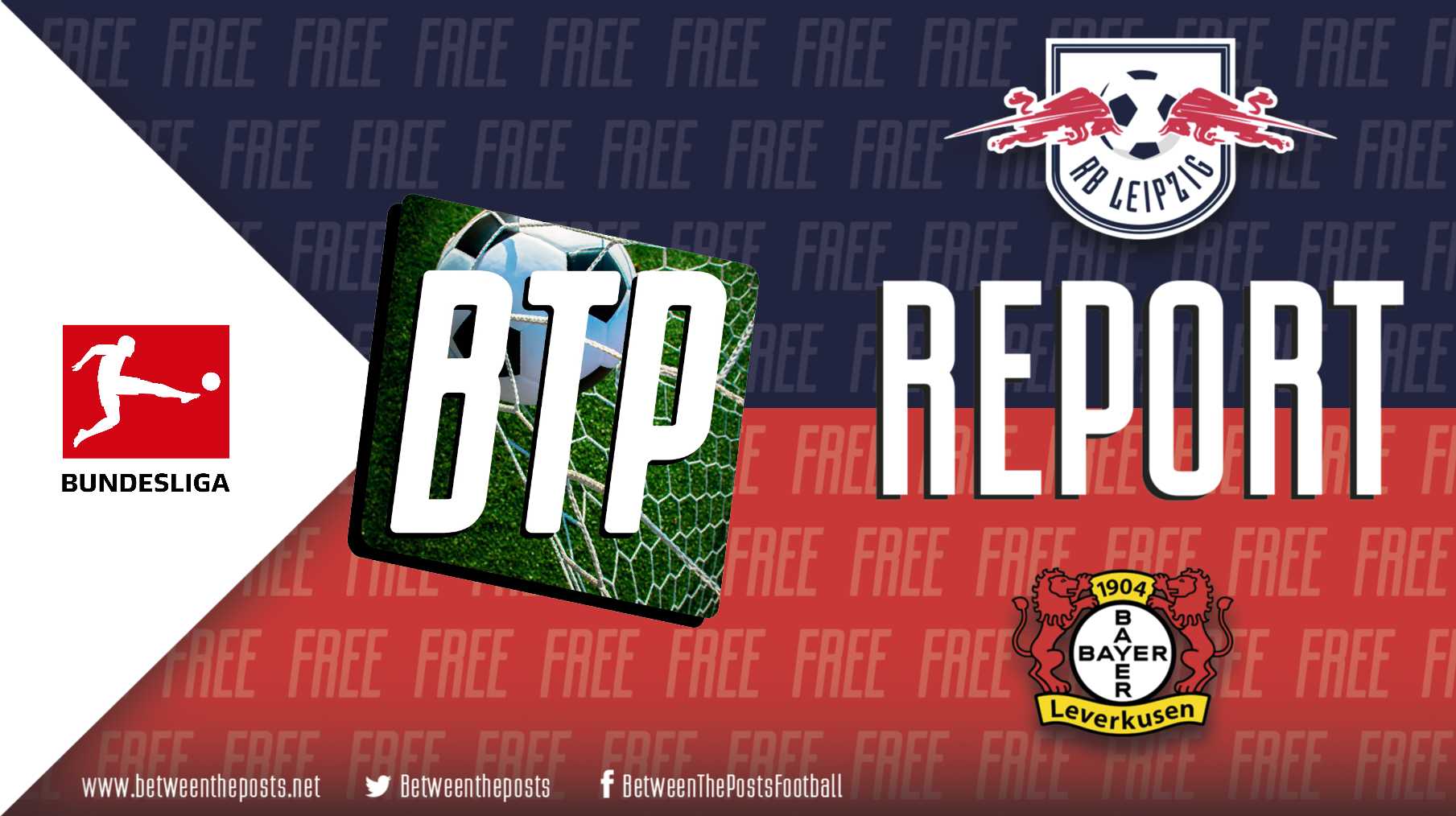 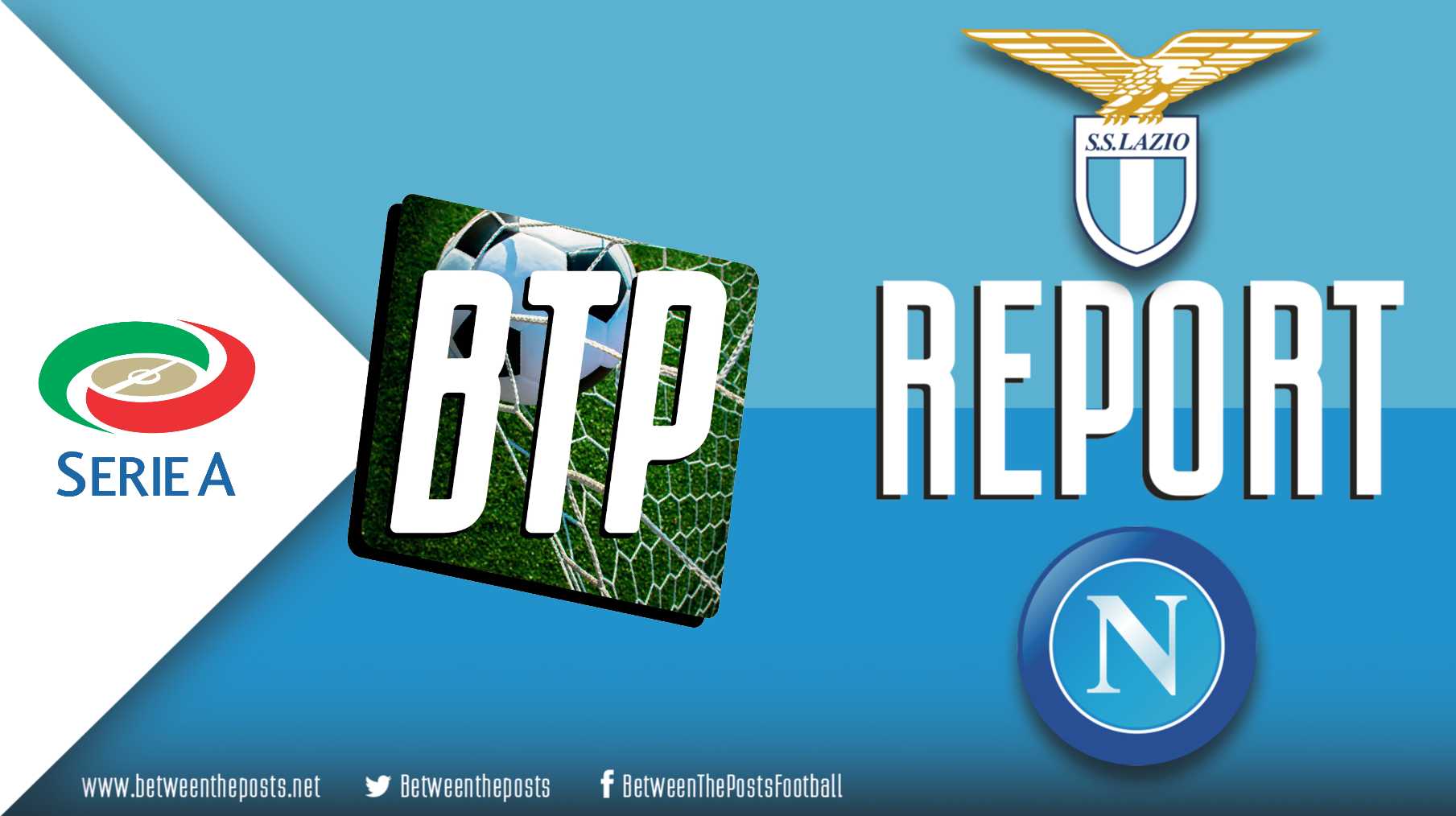