Both teams struggled on the offensive side of things, until a late moment of defensive collapse presented a moment for the Dutch to express their individual qualities. Up to that point, Senegal’s neat tactical adjustments and well-executed high pressing proved very challenging for Van Gaal’s possession-dependent system. Two late goals tipped the result and showed how tight the ropes of international tournament football can be.

After the opening game of the World Cup proved a rather disappointing game, Group A continued with a much tastier affair. Africa Cup of Nations holders Senegal facing a Dutch team full of eagerness and desire to make a bold return to World Cup football after a painful absence in Russia 2018. Within the boundaries of international football, this proved to be the best of the four matches played thus far, even though both teams struggled on the offensive side of the ball.

Aliou Cissé, Senegal’s manager since 2015, gained international fame with his team’s impressive performance in the 2021 Africa Cup of Nations, where they conceded just two goals and managed to beat Egypt on penalties in the final. Also, Senegal has something to make up for, after being eliminated from the group stage of the 2018 World Cup on fair play rules, tied on four points and on goal difference and goals scored with Japan. Senegal had to make due without the man who converted the AFCON winning penalty though, star striker Sadio Mané, who is out injured for this World Cup.

Senegal lined up in a rather surprising 4-2-3-1 setup, after mainly deploying a 4-3-3 formation in recent games. Édouard Mendy, Chelsea’s reliable goalkeeper, is their undoubted starter in goal, behind a four man defense of Youssouf Sabaly at right back, Kalidou Koulibaly and Pape Abou Cissé as central defenders and Abdou Diallo at left back. The latter filled in for the injured Fodé Ballo-Touré. In midfield, Nampalys Mendy and Cheikhou Kouyaté formed the double pivot, Two central midfielders next to each other. with veteran Idrissa Gana Gueye playing as the advanced central midfielder. Up front played Boulaye Dia, flanked by Ismaïla Sarr on the left and Krépin Diatta on the right.

Louis van Gaal had his team line up in the expected 5-2-1-2 formation, with Andries Noppert in goal, making his international debut. The three man defense included Matthijs de Ligt – a late surprise inclusion over Jurriën Timber mainly for his superior aerial presence – captain Virgil van Dijk and Nathan Aké. The wingbacks were passer Daley Blind and runner Denzel Dumfries. Frenkie de Jong was paired with Steven Berghuis in central midfield, behind Cody Gakpo in central offensive midfield. The striker pair consisted of Steven Bergwijn and Vincent Janssen, who played because Memphis was only fit enough to play thirty minutes.

In line with classic screen play theory, the opening act of the game contained numerous tell tales of things to come and influence the rest of the story. Dumfries placing himself relatively high on the pitch, Blind held a more reserved position to receive and dictate play, Gueye tucked tight onto Frenkie de Jong, De Ligt played an unlucky role in a turnover of play, and the Senegalese offense proved unable to muster more from that occasion than an unthreatening long range effort.

Senegal’s medium-high block A medium block refers to a team that retreats in their own half out of possession, generally only disrupting their opponents some way into their own half. A high block refers to a team that regularly leaves their own half out of possession, to disrupt their opponents far into the attacking half. A medium-high block is well… in between these two variants. proved a challenge for the Dutch to play through. Particularly in the opening fifteen minutes, this led to several potentially dangerous situations, where the African side didn’t always make the right choices. They did, however, win the possession and most of the territorial battle, which put the Dutch on the back foot initially. 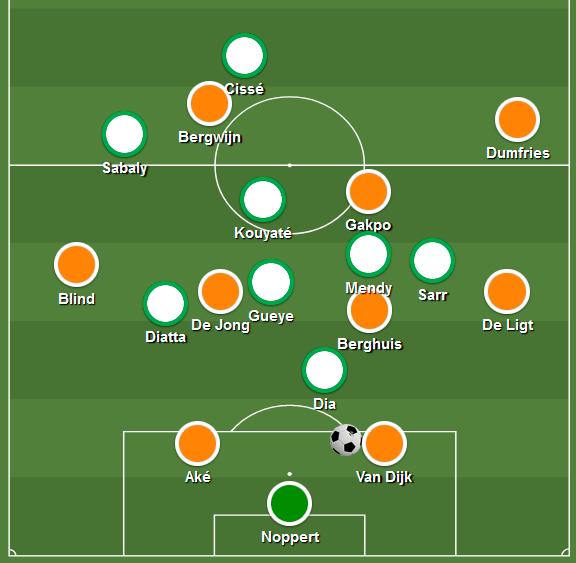 10th minute. Dutch buildup play, with Dumfries in a very advanced position, in a situational back four shape. Note Senegal’s high press with delicate attention to Frenkie de Jong who gets attention from both Gueye and Diatta.

Part of this had to do with the choice to omit any typical off-the-ball players from the Dutch midfield trio. Frenkie de Jong is a deep-roaming playmaker, but was largely frustrated by Gueye’s excellent and disciplined near man-marking defending. Steven Berghuis struggled not in terms of execution, but in terms of experience in positioning in deeper midfield roles, and he failed to drop deep enough to help the wide central defenders bypass the Senegal press with vertical passes. Cody Gakpo mostly drifted to the right side, where Dumfries – as expected – didn’t prove to be the best partner for short progressive combination play.

With the inevitable fade of the initial pressing energy, Senegal dropped a bit deeper. Meanwhile, Frenkie de Jong evaded Gueye’s strong presence by dropping between or next to the central defenders. With Berghuis staying relatively high, this meant long distances had to be covered mostly with passes, and sometimes with runs. All of this magnified the consequences of turnovers of play, and this was where Senegal created most if not all of their open play offense from. A mix of poor decision making and able one-on-one defending by Van Dijk and Aké limited the quality of most Senegalese attempts though, as they ultimately finished the game on 0.62 expected goals The amount of goals a team is expected to score based on the quality of the shots they take. from fifteen attempts. 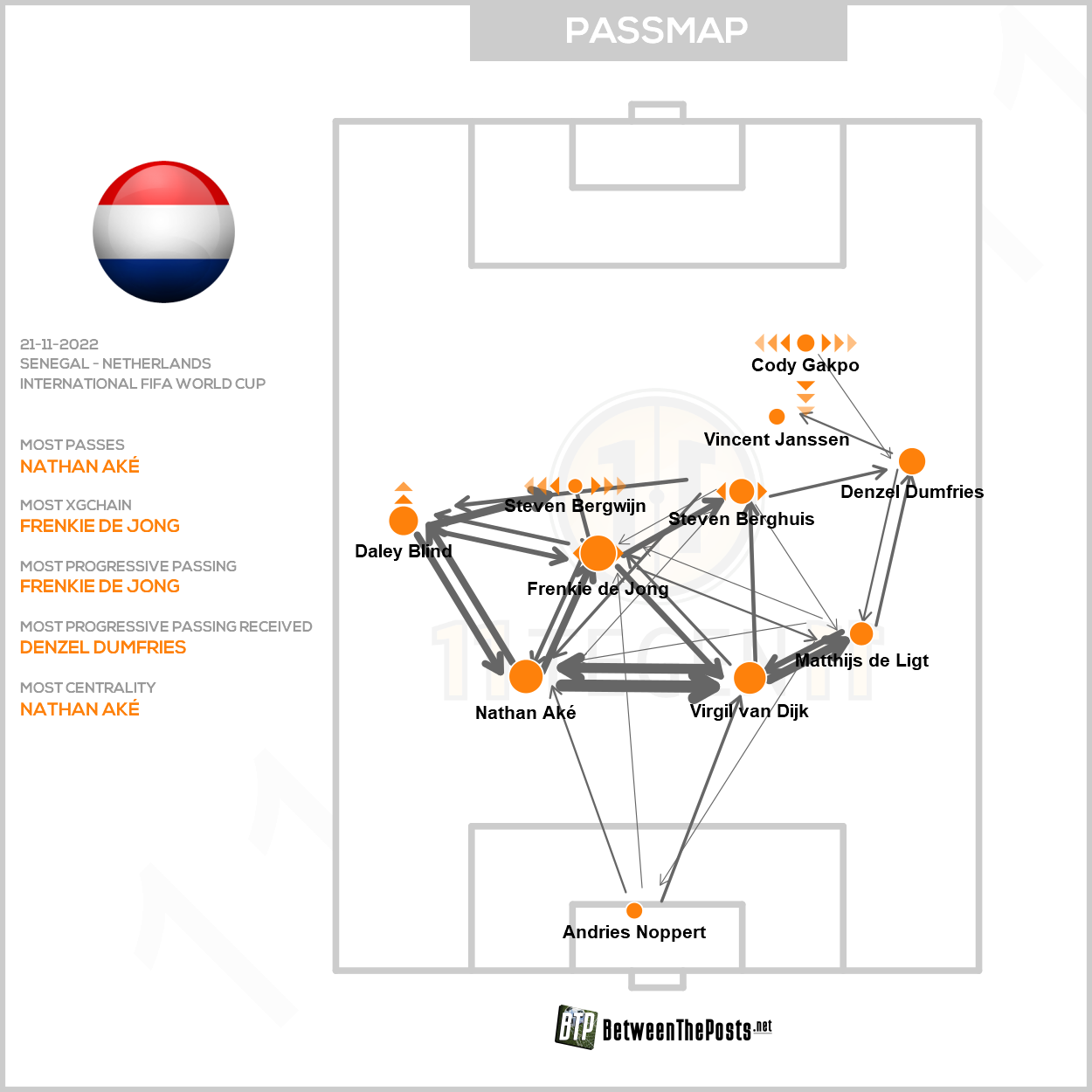 Moments where the Dutch managed to reach the final third The one-third of the pitch that is closest to the opposition’s goal. were mostly a result of Vincent Janssen’s ball retention qualities. Receiving long passes, putting in the physical work in one-on-one battles, and laying it off are definitely the best traits of his game right now. Movement in the final third, technical creative skills and runs into space have all faded a lot in recent years as all sorts of pace and acceleration seems to have escaped him by now. As a result, the Dutch offense lacked a creative spark and quality open play chances were hard to come by. Apart from Bergwijn unable to connect on a Gakpo low cross in the 5th minute, the first half passed without any major chances.

The second half opened in much the same mold, with both teams unchanged in terms of lineup and tactical approach. It was not until the 53rd minute that the Dutch finally created some serious threat. Virgil van Dijk lived up to his set piece reputation, connecting to a corner earned and taken by Gakpo. Van Dijk’s short range header just over the bar was the best moment of Dutch offense up to that point.

Amid high expectations, Memphis was finally allowed to make his entry into the game in the 62nd minute, replacing Vincent Janssen. With Memphis, the Dutch finally had that much needed creativity and dynamism up front, which forced the Senegalese defenders into more challenging decision making than the rather static offense had presented that far. Memphis dropped off from the striker spot – perhaps a bit too much here – and proved able to find fellow attackers like Bergwijn and Gakpo in space.

Capitalizing on one of too many instances of Frenkie de Jong hero-ball, Senegal had one of their better chances of the game. After forcing the Barcelona midfielder into a simple turnover with the Dutch in a very poor rest defense A team’s defensive organization at the moment that the ball is lost to the opponent. shape, Krépin Diatta fed Dia, whose shot on the turn forced Noppert in a full stretch to the low corner. One moment that could easily have upset the entire game, and with that, the entire tournament for both teams.

While the Senegalese defensive plan had worked very well until deep into the second half, one short lapse was punished in the 84th minute. After clearing a first wave of Dutch offense, both right back Sabaly and substitute right winger Jackson collapsed on Blind in an attempt to win the ball. Always calm and collected, Blind executed a simple short passing combination with Memphis, who freed up Frenkie de Jong, in acres of space for probably the first time in this match. His inswinging cross tempted Mendy to come off his line, but the Chelsea keeper was beaten to the ball by Cody Gakpo, who executed a back-of-his-head header perfectly.

The remainder of the match saw Senegal chasing a late equalizer, but unable to master more than a very long range effort from Pape Gueye, and a close range off-target header from Bamba Dieng, in injury time. One interesting tactical element in this final phase of play was Van Gaal showing his full defensive setup, bringing Marten de Roon for Gakpo in injury time. This left Klaassen as the most offensive midfielder, and in the dying seconds, he increased the score to 0-2 through a rebound attempt on a well-placed Memphis shot which Mendy failed to clear wide enough. 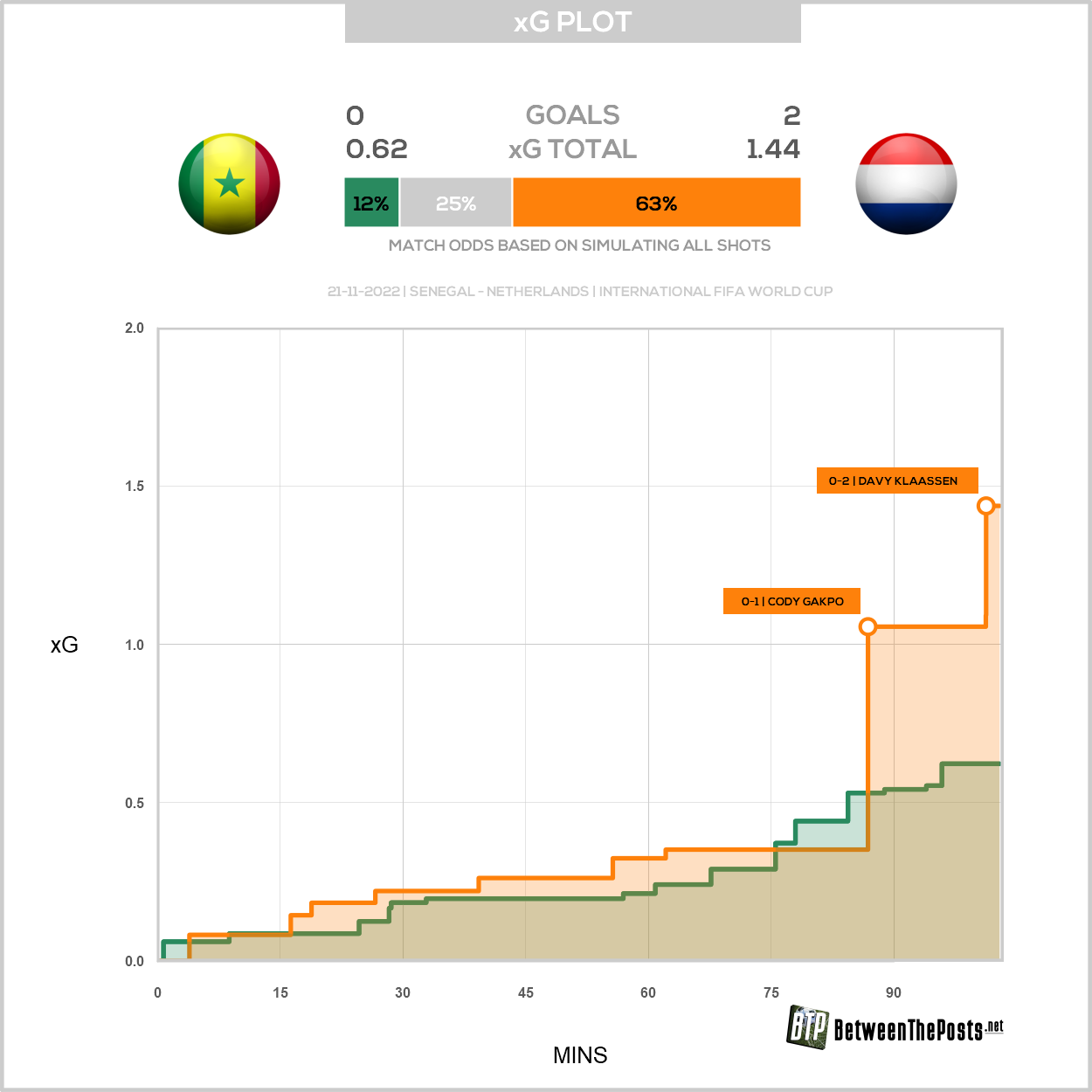 Both teams had their struggles, mostly on the offensive sides of play, and both sides deserve credit for their play as well. Senegal made smart tactical adjustments, in line with their reputation as a defensively strong unit. Gueye’s high marking job limited Frenkie de Jong’s influence on the game, and forced him into hero-ball that could easily have cost the Dutch a result. On the other hand, Senegal’s choices in offensive transition significantly limited their chances of a win.

For Senegal, things now depend fully on the battle with Ecuador. That matchup in the final round of the group stage should be a dogfight for qualification for the knockout phase. Before that, Senegal would be looking to put more than two past a rather hapless Qatar, to gain the slight upper hand going into the final game and forcing the Ecuadorians into some form of offense.

Louis van Gaal and his Netherlands side bagged exactly the result they wanted, even though on the face of play they found significant challenges in this match. Warning signs from this game should best be translated in adjustments in buildup play, in order to limit the distances needed to be covered by Frenkie de Jong and both wide central defenders, and to avoid the hero-ball situations that almost cost a result here. With Ecuador and Qatar next, things look bright in terms of chances to top the group. 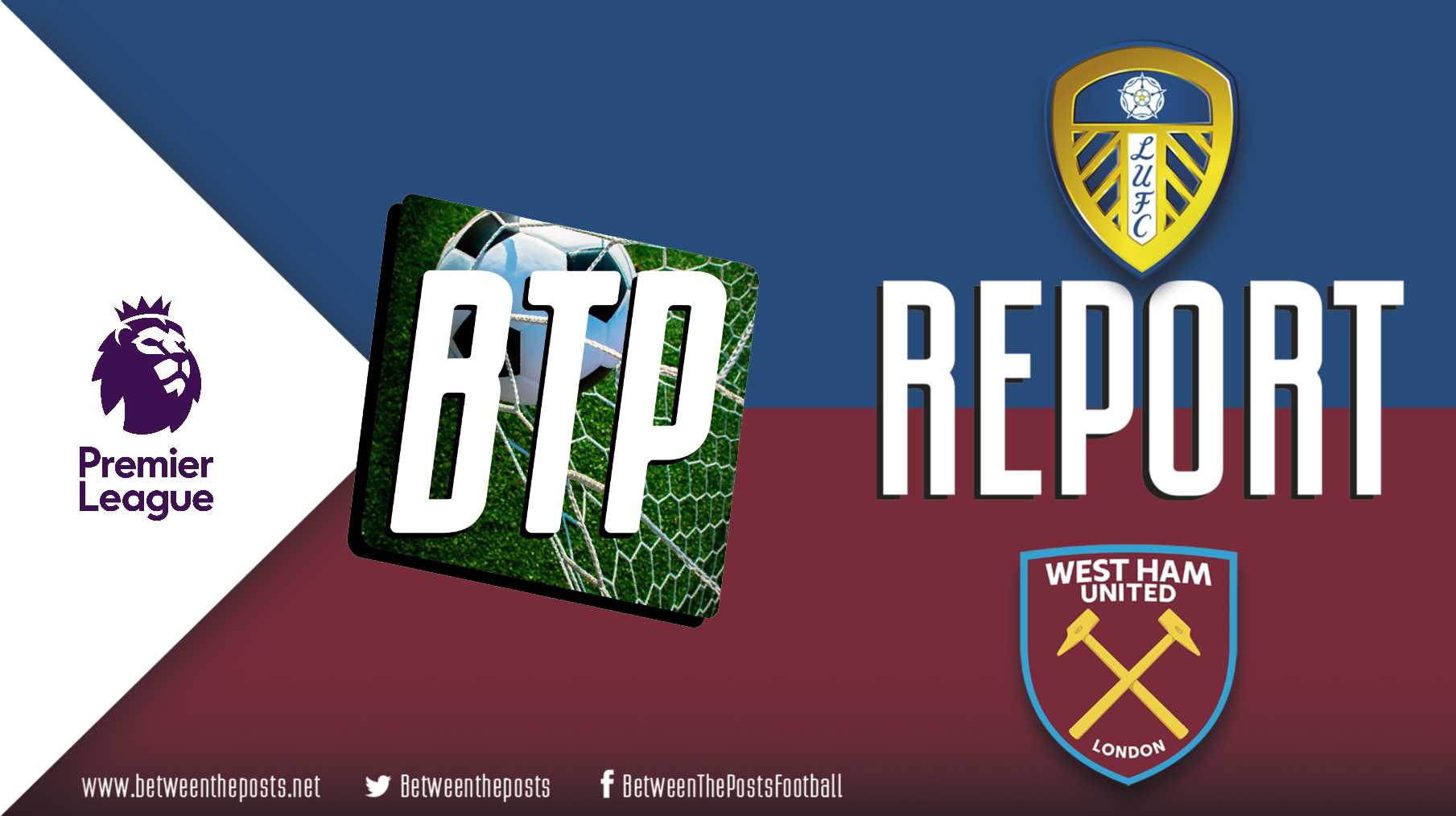