Sevilla – Barcelona: Messi, once again, the villain of the show at the Ramón Sánchez Pizjuán (2-4)

Pablo Machín’s tactical creativity only earned its credit in the early stages of this encounter as the little Argentine’s talents eventually prevailed. Sevilla’s true pantomime villain showcased why he is still undoubtedly the best there is.

Just three days had passed since Sevilla’s 2-0 victory over SS Lazio, that sent them cruising through into the UEFA Europa League Round of Sixteen. Although he would have liked to have field a full-strength eleven for this clash as well, Machín’s hand was forced and so in came some changes.

Franco Vázquez, Roque Mesa, Sergio Escudero and André Silva all dropped out with Marko Rog, Éver Banega, Maximilian Wöber and Quincy Promes being the ones to step in.

With a day’s more rest, Ernesto Valverde could afford to name a side nearly identical to the one that started Barcelona’s 0-0 draw in Lyon. However, instead of a 4-3-3 formation, this setup appeared to be much more like a 4-4-2, with Samuel Umtiti make a long-awaited return to the defense in place of Clément Lenglet, Arturo Vidal coming in for Sergi Roberto in midfield and Philippe Coutinho getting the nod over Ousmane Dembélé. 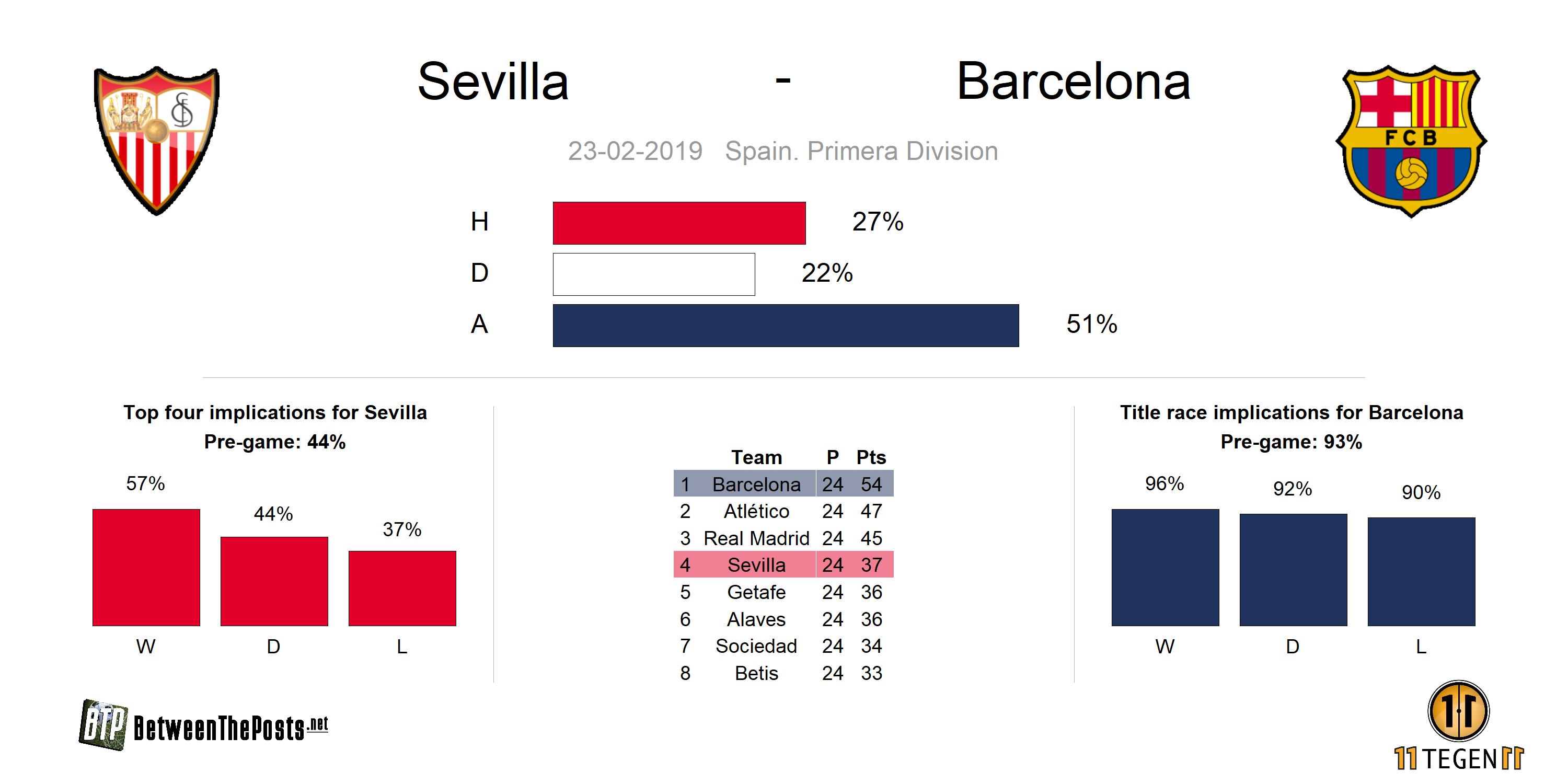 Away from the tropes of his renowned back-three setup, like his counterpart Valverde, Machín appeared to have set his side up in a 4-4-2 shape. The shape tossed and turned but a 4-4-2 seemed to be the gist.

Sevilla’s defensive formation orientated itself around the ball, which was almost always on the home side’s right in the first half. Jesús Navas interchanged between a normal wide-midfielder role and a wing-back role based on the movements of Jordi Alba. On the far-side, however, Quincy Promes was much more offensively positioned. As Barcelona had no true width to exploit on their right side, Promes could aggressively push up from his left-midfielder position when the ball was shifted across to his side. By doing so, he could reach Gerard Piqué by the time he received the ball and subsequently direct play back the way it came from. 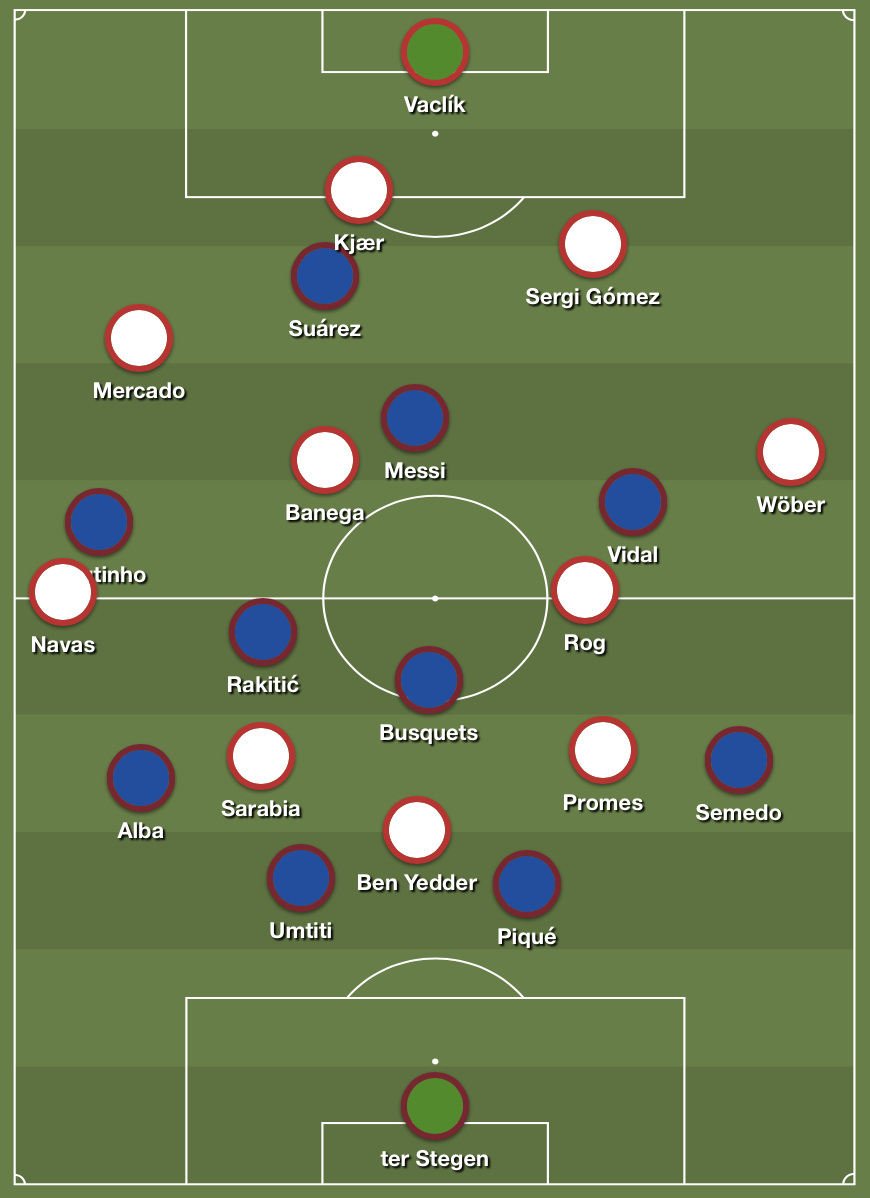 Barcelona’s 4-3-3 variant in possession against Sevilla’s high pressing 4-4-2 shape. Both teams only loosely adherent to these structures.

Promes’ advanced positioning was also dangerous for counterattacking reasons. By having his direct threat in an open channel – since Vidal often detached himself from the midfield three to push higher up instead – Sevilla had an easy escape from the congested ball-side. Equally, the two readily-positioned center-forwards also caused a major nuisance. Barcelona had troubles dealing with the threats of each in transition as they were not nearly setup well enough to defend the lanes into them following turnovers. 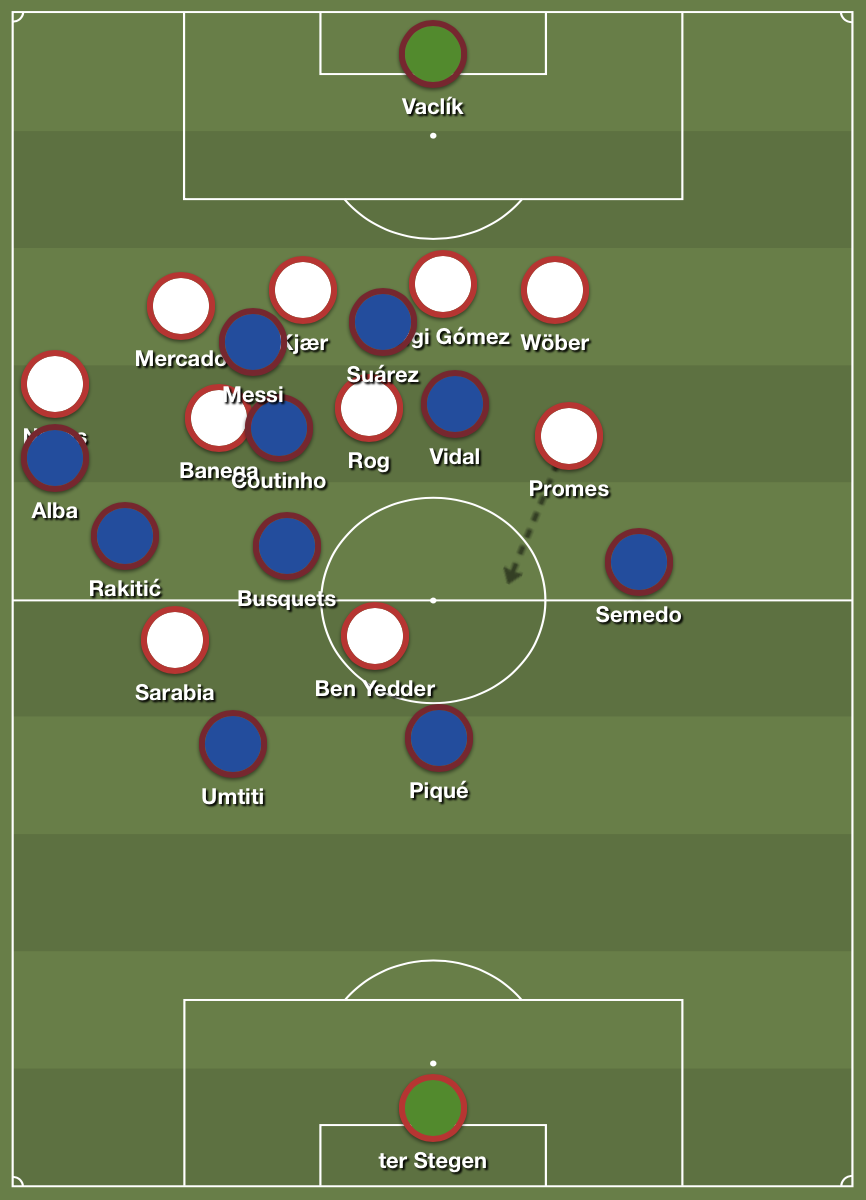 As was evident in the twenty-third minute, Promes managed to block a weak attempt from Messi to slide a teammate in behind. Promes then sprung a quick pass into Wissam Ben Yedder right through the gaping channel between Nélson Semedo and Sergio Busquets, both of whom were also unsupported by either center-back in this instance. Surging forward with the ball, Ben Yedder was soon accompanied by Navas, who had torn up ground to make it there on the overlap. The striker obliged and fed Navas, who tucked it into the far corner from an ever-narrowing angle.

Both sides bring their attackers closer to each other

Until that point, Sevilla had looked lively and in control of the game. They were not just sitting in and springing counterattack after counterattack. They held their own in possession too. The key for them – not unlike Barcelona’s approach in this match – was to have the three inside forwards very close together. In doing so, they could exploit the Barcelona defense so that they could free up players to drop into spaces between the lines.

They could also create dangerous overloads against the visitor’s 4-3 defensive lineup. Always moving for the ball, Ben Yedder, Pablo Sarabia and Promes were proving to be an unheralded nuisance to the away side. 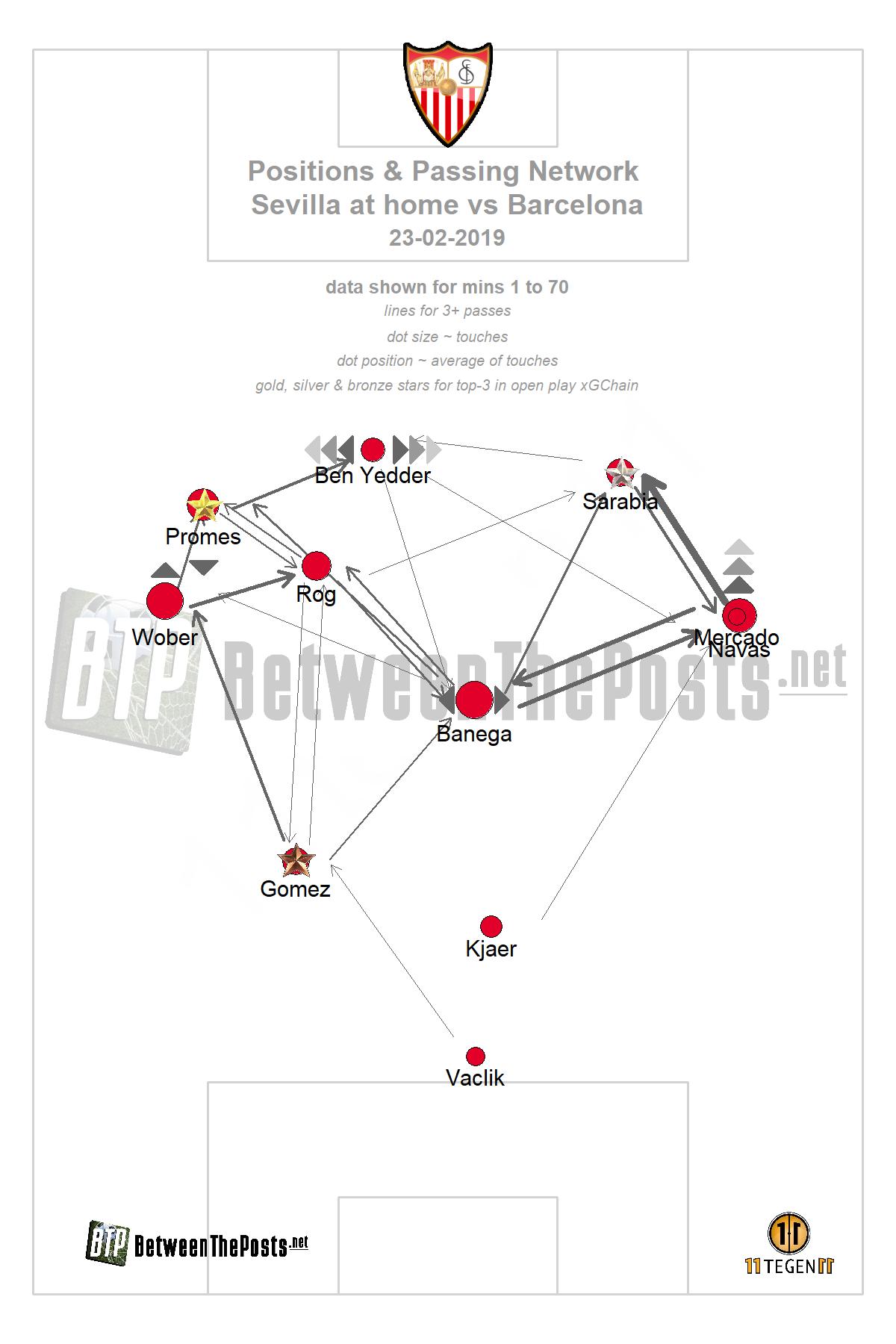 The closeness of Sevilla’s attackers was also present in Barcelona’s attacking attempts. Unproductive and almost suicidal as it might have seemed, Valverde’s men constantly played the ball into the feet of Luis Suárez, Coutinho, Messi and even Vidal when he had ventured over, no matter how tight the space was. This seemed to be their safest form of circulation as shifting it from side-to-side was still unachievable, mostly.

To some some surprise, Barcelona’s persistence to pass into tight spaces did pay off, shortly after Sevilla had taken the lead. Messi at the heart of yet another move had the ball fed into him before driving to combine in an even tighter space with Suárez. As they engaged in this, Alba’s dart into the center opened up the lane out to Ivan Rakitić, who had drifted out to the wing. The Croatian had eyes on one player and one player only on this cross – who other than Messi? His well-placed, clipped, pullback was met with astonishing power and accuracy as the Argentina’s volley fizzed into the top corner.

One slight tactic Sevilla had been trying to perform, but not necessarily an entirely new one, was to try and force a pressing situation off the back of a long, long throw down the flank. Here, the forwards would push towards the ball, increasing the pressure with every growing second.

Before, Sevilla had appeared to have been guilty of overcommitting in their attempts to stop Marc-André ter Stegen. This time, however, it worked completely to their advantage. The German did not have the time nor space to risk opening his body when receiving across goal from Piqué. Resultantly, the goalkeeper panickedly pumped it high up in the air. Banega met the ball, knocked it down to Navas and then the overload came in handy as Sarabia was already positioned on the last line. 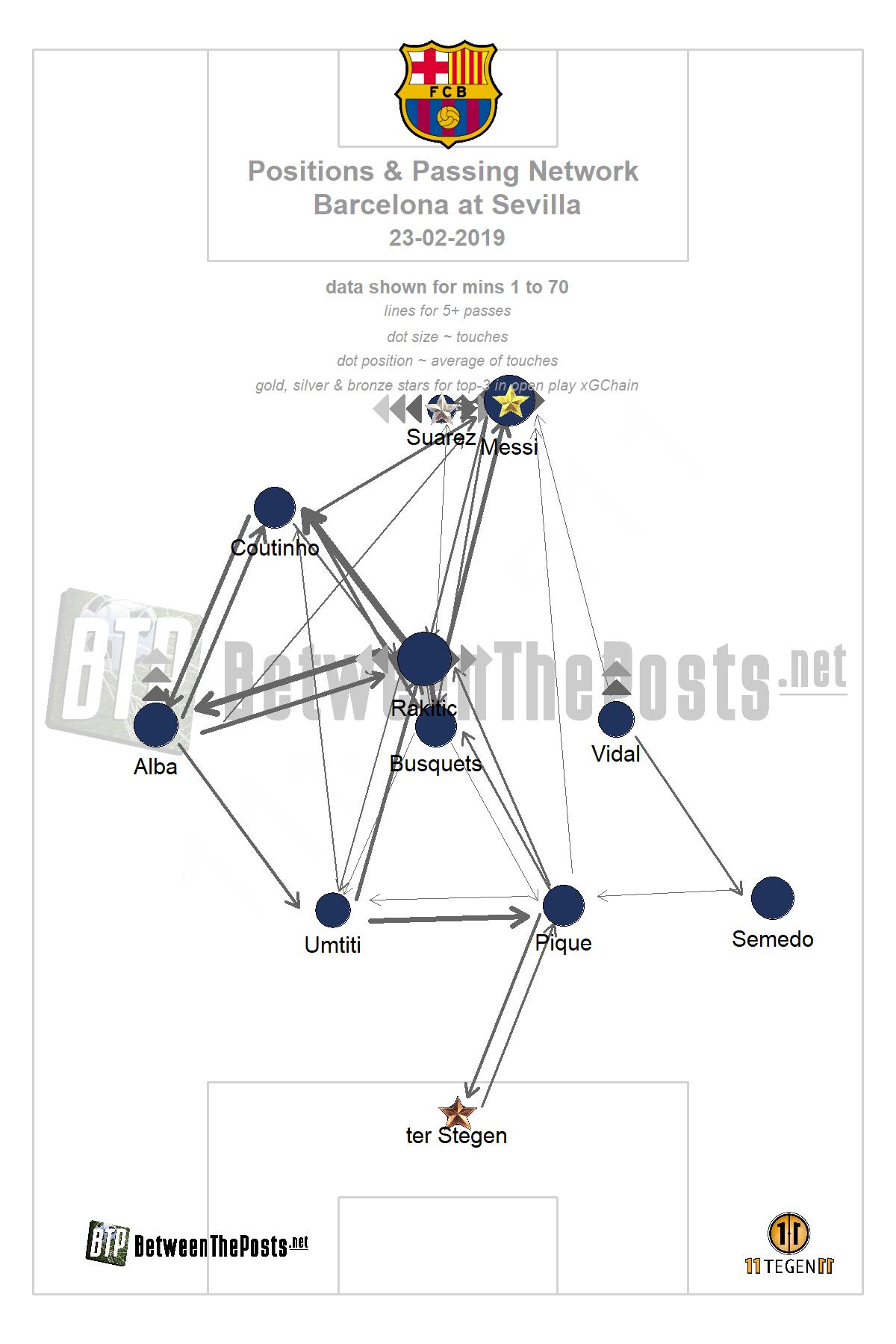 Valverde brought on Sergi Roberto and Ousmane Dembélé for Semedo and Vidal for the second half. The entirely right-sided changes provided a new lease of life down that side as the threat of Dembélé, in particular, offered something the eleven from the first half did not possess.

With a now far more balanced positional structure, Barcelona were working the ball back and forth much more cleanly and, since Alba’s position dictated Navas’, he, as the far-sided wing-back / wide-midfielder could not afford to step up like Promes had been doing during the opening half.

It was not long until the Frenchman nearly had a crucial impact on proceedings. Providing a quick and lethal far-sided threat in transition, Messi sent him and Suárez away on the break. Suárez was the deliverer of the ball this time. Dembélé, unfortunately, fluffed his effort and so there went a very good chance for Barcelona to draw level.

Sevilla struggle to defend the space in front

Following a series of substitutions from both sides, Machín had eventually tweaked back into a 5-3-2 defensively. With all the space now out on the sides of Sevilla’s midfield, particularly towards the left, Dembélé was positioned more to the left instead now than on the right. Here, it was more likely he could do damage in situations where he was more likely to come up one-versus-one.

With the ever-decreasing midfield presence on display, Sevilla incurred some issues. Noticeably for Barcelona’s turnaround goals.

In the 67th minute, some simple pressure on a routine play-out routine by Sevilla went horribly wrong when Tomáš Vaclík miscued his clearance, which gave the ball straight back to the visitors. What was then so magical was the movement of Lionel Messi. It was as if he had pictured this exact goal happening a thousand times over. He casually strolled back to the edge of the box, right in time to pick up play on the cutback before clinically stroking the ball into the top corner on his weaker foot.

Then, whilst defending in transition, Sevilla’s midfield looked lost, as if they were clueless to who they should be picking up. Substitute Carles Aleñá pushed into the center on the edge of the box, completely unmarked. With two recovering central-midfielders way out on the sides of this dangerous area, he had all the time in the world. He let rip with his shot and, rather fortuitously, the blocked effort deflected the way of Messi for his fiftieth career hat-trick.

The fun did not stop for Barcelona, though, at least not for Messi and his marveling fans, anyway. With fewer than two minutes left of stoppage time, a second knock-down from a long, ter Stegen kick out, was chested and instantly chipped over the top for Suárez. He finished in similar style to wrap up a 4-2 victory.

Another goal-fest at the Ramón Sánchez Pizjuán against Barcelona for Sevilla. Again, the fruitful score line not falling in Sevilla’s favour thanks to the magic of the cheat code that is Lionel Messi. Whilst the reds of Seville have the Europa League to contend with, it is their fight for Champions League qualification that is in severe jeopardy right now, as Getafe overtook them in fourth place with a lunchtime win over Rayo Vallecano.

As for Valverde’s side, they bounced back from the disappointing goalless draw in Lyon, claiming an important win whilst putting the pressure on the Madrid sides to respond with results of their own this Sunday.