Sevilla’s matchup with Barcelona pitted the two in-form teams in Spain of 2021 against each other. But there was only one side that looked likely to come out on top in this game. In a three at the back system, the visitors managed to stifle their opponents while taking their chances to seal a precious three points.

Sevilla have been in fine fettle in recent weeks. Though on the backfoot in their Champions League tie with Borussia Dortmund, they have had little to complain about on the home front. Winning their last ten games in domestic competitions, they looked to take a win here and move into third place.

Barcelona have also been impressive in terms of results. In 2021, they have won twenty eight points from their last ten games, avoiding a loss in the league since the beginning of December. Two points ahead of the hosts before this game, they looked to stay clear of their top-four rivals and avenge their defeat in the first leg of their Copa del Rey clash.

Julen Lopetegui used a 4-3-3 formation in this matchup. The manager made three changes to the side from their game at Osasuna. Sergio Escudero replaced Karim Rekik, while Óliver Torres made way for Ivan Rakitić. In the attack, Papu Gómez came back to the fold as Suso dropped to the bench.

Ronald Koeman set up his side in a 3-5-2 shape, moving away from the usual 4-3-3 system he has opted for in recent months. After a midweek game with Elche, he also chose to rotate his team, making four tweaks to the starting eleven from that match.

Both teams traded spells in possession in the early stages of the game. However, it was Barcelona that looked more assertive. As such, Sevilla sat off in a medium block, A medium block refers to a team that retreats in their own half out of possession, generally only disrupting their opponents some way into their own half. moving from their 4-3-3 setup into a 4-2-3-1 shape.

The principles of Sevilla’s off-ball setup were the same as usual. Luuk de Jong made arced runs to cut off access to passing lanes across the backline. Ivan Rakitić would then step up from midfield to mark the defensive midfielder near the ball. The winger on the far side from the ball then covered inside to deny access to the other defensive midfielder.

Since Gómez was often the one to cover Busquets, Lenglet could drive forward with the ball to separate from the winger covering backward. As such, the last line would then shift to close down his options. Jesús Navas would move to close down Alba, with Joan Jordán covering in-depth and Jules Koundé moving wider behind the right back. 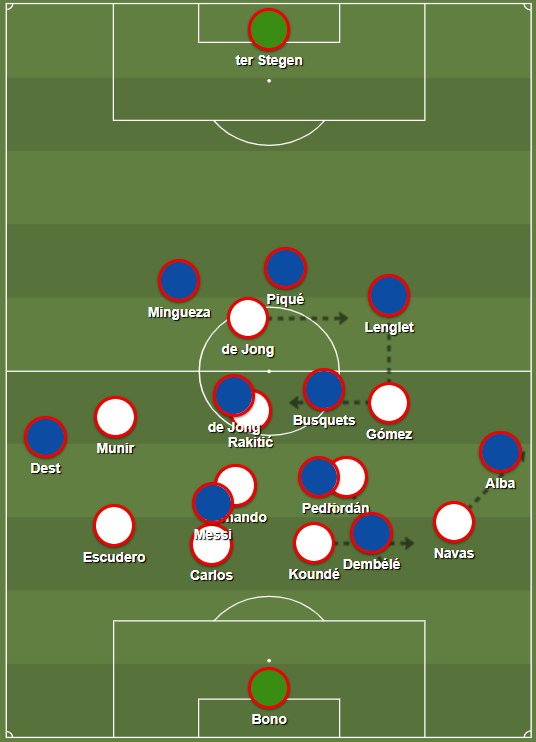 Sevilla’s 4-2-3-1 medium block with the shifting back four on the right.

In turn, Barcelona retained their 3-5-2 shape on the ball. The three center-backs circulated the play with the help of Sergio Busquets and Frenkie de Jong. Sergiño Dest offered width on the right, and Jordi Alba on the left, leaving Ousmane Dembélé to operate mostly inside in the left halfspace. If you divide the field in five vertical lanes, the halfspaces are the lanes that are not on the wing and not in the center. Because there is no touchline like on the wing, players have the freedom to go everywhere. But this zone often is not as well-defended as the very center. This makes it a very valuable offensive zone to play in and a lot of chances are created by passes or dribbles from the halfspace.

The Catalans made several changes to their offensive system as the first half went on. With the press arriving late from Gómez, they initially found joy from the left. Dembélé made off-ball moves into the space that Escudero left, pulling Koundé wider. His first move would always trigger a second run, often leaving Messi to receive in a central pocket.

Around ten minutes in, de Jong started to move higher, changing the setup into more of a 3-1-5-1 shape. Messi drifted around in central areas, while the midfielder could offer depth in the right halfspace, working in tandem with Dest.

Another tweak emerged around the midway point of the first half. Pedri was a more constant presence in the left halfspace, freeing up Dembélé to move into the center. Within minutes of this change, the forward had made a decisive impact.

In the 29th minute, Fernando burst onto a clearance from Koundé, but the ball slipped out of his control. Busquets mopped up, finding Messi free on the halfway line. The captain turned on the ball before slicing the backline to send Dembélé in behind. His teammate raced through on goal, sliding a left footed shot under Bono to hand his side the lead.

As Koeman revealed, the switch in shape to use three at the back sought to help his team when pressing. With extra security from the center-backs, de Jong and Pedri had the license to move into the first line of defense to support Messi and Dembélé.

At times, up to four players would be on the edge of Sevilla’s box, but the man-to-man style of defense looked less prone to attack in this game than in other matchups. Yet, Sevilla looked rather uninspiring, placing the onus on them to gear up their attack.

As such, Lopetegui opted to make three substitutions after half-time. Diego Carlos came off for Karim Rekik, Suso switched in for Gómez, and their top goalscorer Youssef En-Nesyri also entered the fray. 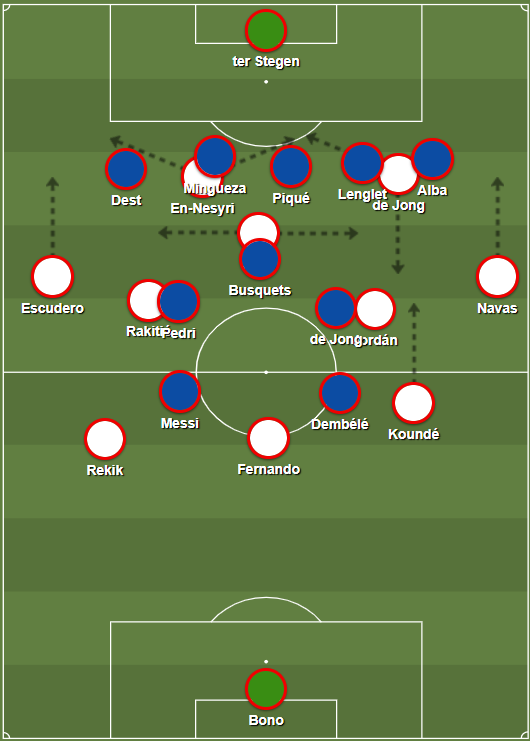 Sevilla’s 3-4-1-2 offensive system at the start of the second half.

This phase was Sevilla’s most productive of the game. Suso drifted to either side of the pitch, creating connections to the right wing. Here, Navas offered the outlet for his side, either firing off shots at goal or looking to find his teammates as they loaded the box.

With just under half an hour left to go, Lopetegui made a final roll of the dice. Óscar Rodríguez replaced Rakitić, while de Jong made way for Óliver Torres. Again, these changes came with several tweaks to positions on the field. Torres joined Jordán deeper, sitting in the double pivot. Two central midfielders next to each other. Suso then moved from the center to the right in a front three, with En-Nesyri central and Rodríguez to his left.

However, the pressure was mild at best, as the hosts failed to register a single effort on goal after these changes.

Though Barcelona held the lead, the goal margin still offered Sevilla the hope of taking something from the game. Indeed, they gave their guests a scare with ten minutes left to go. Suso dropped into the right halfspace, flicking a pass onto Torres, who made a well-timed third man run. The midfielder passed the ball into En-Nesyri, who spun and buried a shot into the net. However, in doing so, the ball had bounced off of his arm, leading to the referee disallowing the goal.

After this brief shock, Barcelona faced another small setback. Ronald Araújo had returned to the field after picking up an injury three weeks ago away to Betis. However, just moments after the goal, it was evident that his injury had flared up, forcing him off the pitch. Samuel Umtiti then took his place, looking to help his side see out the win.

Fortunately for the away team, Messi calmed their nerves by putting the game beyond Sevilla’s reach. Combining with Ilaix Moriba, the forward breached the backline, driving into the box. Bono parried his lobbed finish, but the captain tapped home the rebound to put his team two goals to the good. 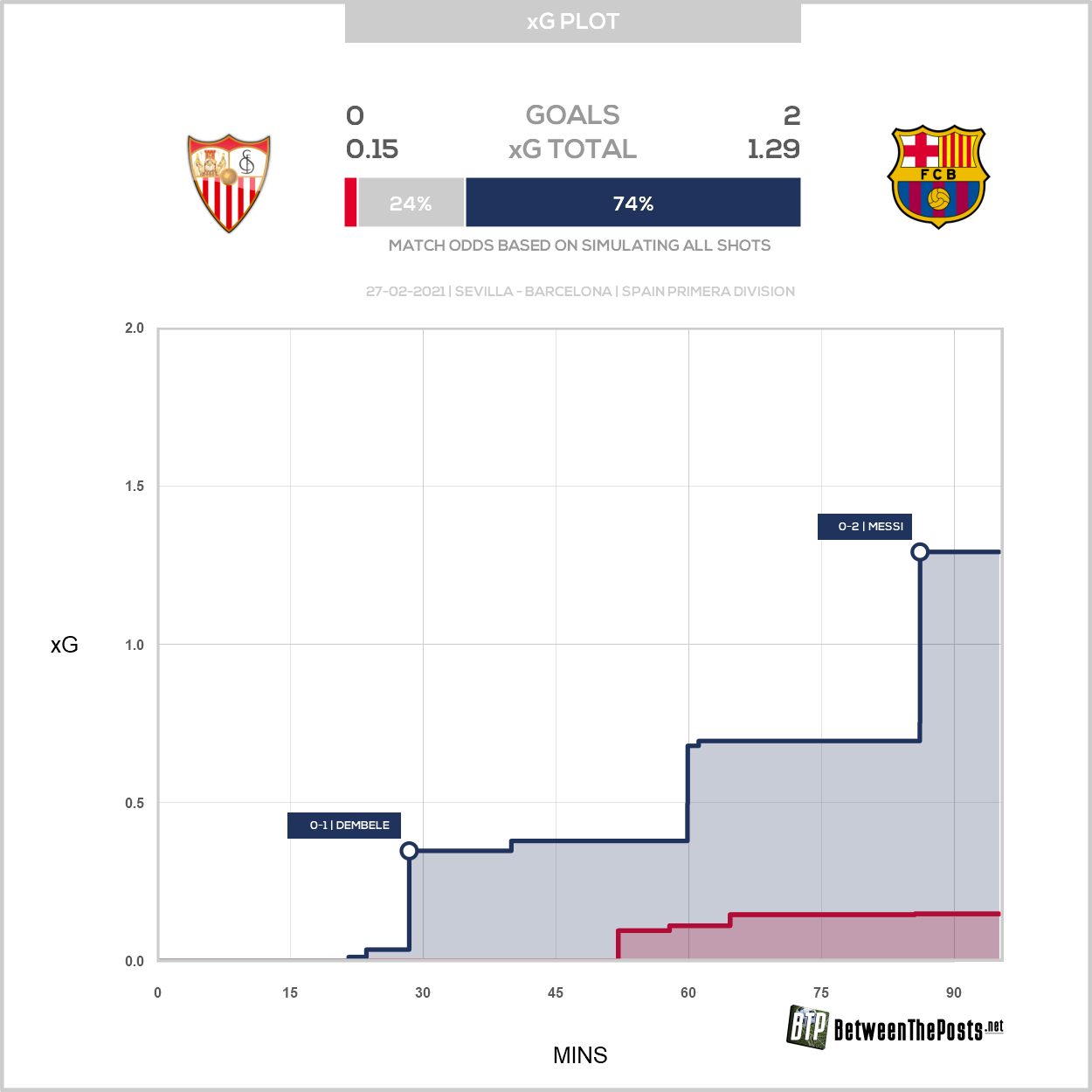 Despite the in-game changes to the personnel and shape, Sevilla were toothless during the match. Slipping away from the title race, their lack of potency in the final third again seems to be proving costly.

Koeman will be glad to have seen his side take the three points. Against one of the league’s top teams, they looked assured, earning the reward of jumping into second place, just two points adrift of the leaders Atlético Madrid. He will now hope his side can mimic their display in midweek when they look to claw back their two-goal deficit to the hosts in the second leg of the cup. 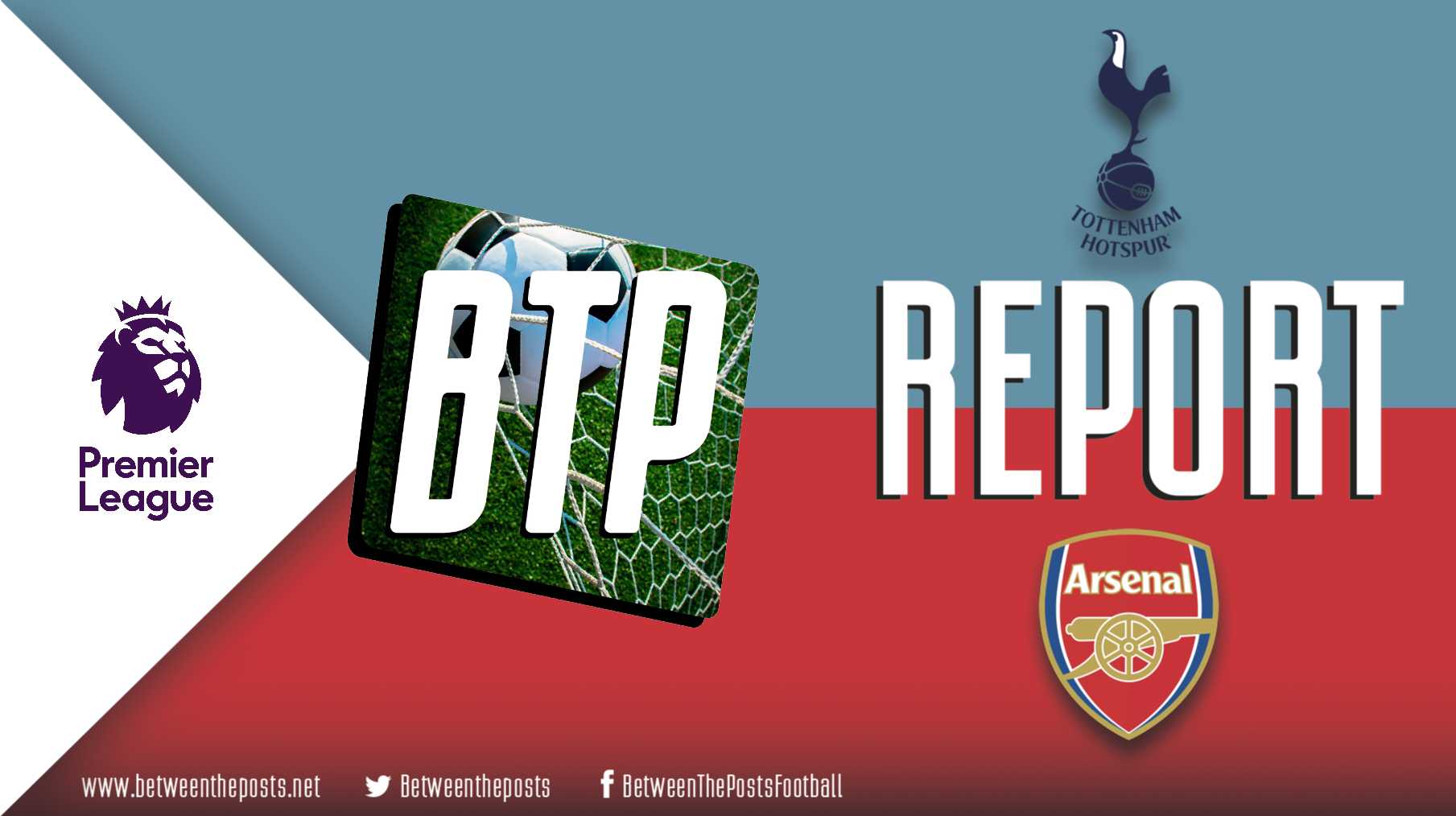