After seventy minutes of a well-structured Sheffield United in control of the game, Ole Gunnar Solskjær’s formation change flipped the game on its head. Manchester United came back from two goals down, only to lose the lead in the final moments, a fantastic and entertaining Premier League affair.

Though just a point separated, viewpoints on these teams’ league position could not be further apart ahead of Sunday’s late kick-off. Chris Wilder’s team could have only dreamed of being in fifth position at this stage before the campaign had started.

Sheffield United have stuck to their unique and organized 3-5-2 system, that was pivotal to their success last season. With a heavy emphasis on overlapping center-backs to overload When one team has more players in a certain area or zone than the other team. key areas, Wilder’s structured side have so far avoided any relegation battle stress. Wilder would make two enforced changes to his starting line-up; Simon Moore replacing Manchester United loanee Dean Henderson in goal, whilst Phil Jagielka came in for the injured John Egan at center-back.

Manchester United’s tally of sixteen points from twelve matches is their lowest since the 1988/89 campaign. Ole Gunnar Solskjær may have invested in plenty of young talent, but a dearth of attacking ideas and struggles in their buildup play have held his side back from significant progress in his time in the dugout.

Solskjær has stuck to the 4-2-3-1 system so far this season but would make just his second formation change for this one. Phil Jones coming in for Scott McTominay resulted in a switch to a 3-4-3 system with an offensive trio of Marcus Rashford, Daniel James and Anthony Martial.

With Manchester United controlling possession and attempting to play out from the back, Sheffield United were able to break into their defensive setup. Men behind the ball at all times, they man-marked potential passing options and pinned back Solskjær’s United in their own half. 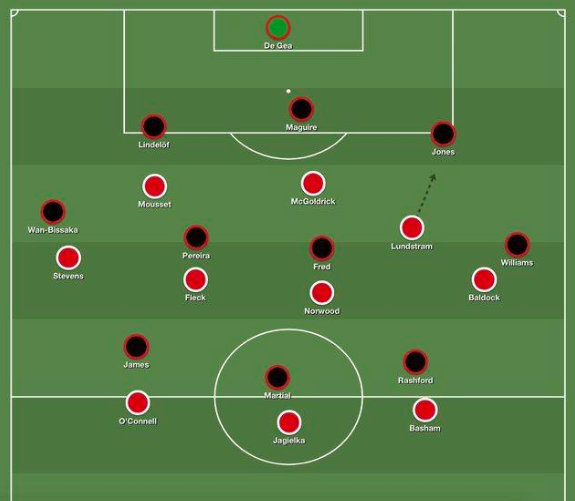 Sheffield United’s 3-5-2 shape pins Man United deep in their own half.

The switch to the 3-4-3 formation had a negative effect on Manchester United. The central midfield duo of Andreas Pereira and Fred were closely marked, as well as both fullbacks – a key route for their ball progression. John Lundstram often stepped out of the midfield line to press Phil Jones if he was on the ball.

When the Manchester United defense attempted to play the ball out of the back, they were soon ushered down the flanks. Chris Wilder’s team overloaded these areas whilst sticking to their shape thanks to their drift defending – moving players towards the ball with their structure still in place.

Sheffield United were well-drilled and organized to maintain this shape in their pressing play. Space was closed effectively and Manchester United struggled to play out of their half – they made just eight final third The one-third of the pitch that is closest to the opposition’s goal. passes in the first quarter of the match.

Quality rather than quantity of chances

Due to passive passing from Manchester United and the strong defensive structure they had established, Sheffield United made plenty of turnovers in the middle and defensive thirds. Their attack was entirely focused down the channels and pulling the back three out of position. Attacking transitions would often start from long channel passes from the center-backs, with either David McGoldrick or Lys Mousset running down the flanks. 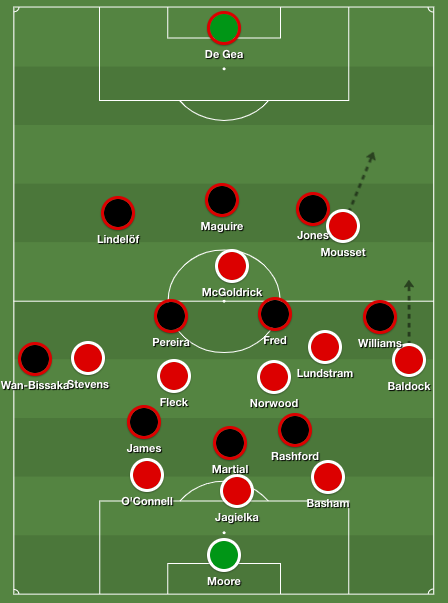 Sheffield United target the channels with long balls from their center-backs.

Wilder’s team were able to flood a vast number of players down either one of these flanks, with the strike partner, wing-backs and another midfielder all in support. From there, they could break into sharp, interchangeable passing moves, often with the third man available in space to retain the ball and make progress.

This attacking style of play did not produce a large amount of shots, but id did enable Mousset and McGoldrick to get into some great positions. The first goal showcased just how effective these long balls were; a quick throw-in and excellent pass from Oliver Norwood behind the defensive line allowed Mousset to go one-versus-one in chase with Phil Jones. Mousset would win the battle, cut the ball back inside for Lundstrum – whose shot was saved, but turned back in by John Fleck.

Sheffield United were imperious down both channels, breaking into some brilliant passing sequences – all that was missing was the shot count to match their impressive attacking display.

Sheffield United’s defensive setup had one flaw; the space between the midfield and defensive lines. Ole Gunnar Solskjær’s first substitute initially looked like a way to exploit it, replacing Phil Jones with Jesse Lingard to change their shape into a 4-2-3-1 formation.

However, Manchester United were given an instant set back, as Chris Wilder’s team extended their lead. Pereira lost possession in the middle third, whilst McGoldrick pulled Harry Maguire out of position with a brilliant diagonal run off the ball. Mousset, who started the move, was found by Fleck, before brilliantly placing the ball into the bottom corner.

Lingard would provide another option further forward, however roaming from channel to channel did not exploit the space between the lines. However, Manchester United had better control in the middle third thanks to the extra man and were beginning to take more and more shots at goal. Eventually, in the 72nd minute, they had their breakthrough. Daniel James’s cross into the area was flicked away by Chris Basham, but Brandon Williams fired the ball into the far post with a fantastic strike.

This prompted Solskjær’s next change, taking off Andreas Pereira in exchange for Mason Greenwood, which resulted in Lingard dropping next to Fred. Daniel James would also swap onto the left wing, whilst Greenwood came in on the right. Manchester United had changed their shape into a 4-2-2-2 formation, finally having the adequate numbers between the lines to cause damage. 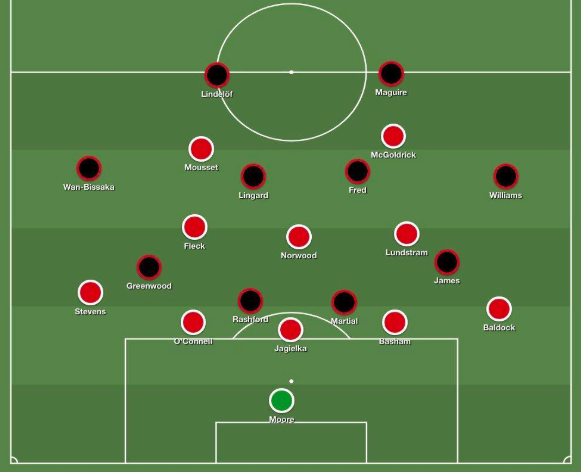 Another tactical change from Solskjær gives Man United better access between the lines.

Just minutes after Williams’ strike, Rashford picked out Greenwood with a brilliant low cross towards the six-yard box. A true poacher’s finish from United’s third youngest Premier League goalscorer – he’s in rich company too, alongside Federico Macheda and Danny Welbeck. Rashford completed the comeback with a fabulous third goal. A great exchange of passes between James and Anthony Martial dragged Basham and George Baldock out of position, before James cut-back for Rashford to finish.

Three goals in seven minutes certainly caused a shock – especially when you consider Sheffield United were in control for the better part of seventy minutes. Chris Wilder had already made like-for-like substitutions, both Mousset and McGoldrick replaced by Oliver McBurnie and Billy Sharp. His final change would see yet another striker come on, Chris Basham at center-back being replaced by Callum Robinson – Sheffield United in a 4-3-3 shape for the final ten minutes.

Solskjær’s third and last substitute was much more regressive, understandable having completed the comeback. Martial was replaced by Axel Taunzebe, as Manchester United reverted back to a three-man defense – as well as returning to their passive form of defending.

Despite having eight outfield players inside of the penalty area, Sheffield United were still able to play through. Robinson flicked the ball into the path of McBurnie who didn’t have a defender near him. He controlled the ball and fired the ball home, despite De Gea getting a heavy hand, meaning this game ended with six goals but without a winner. 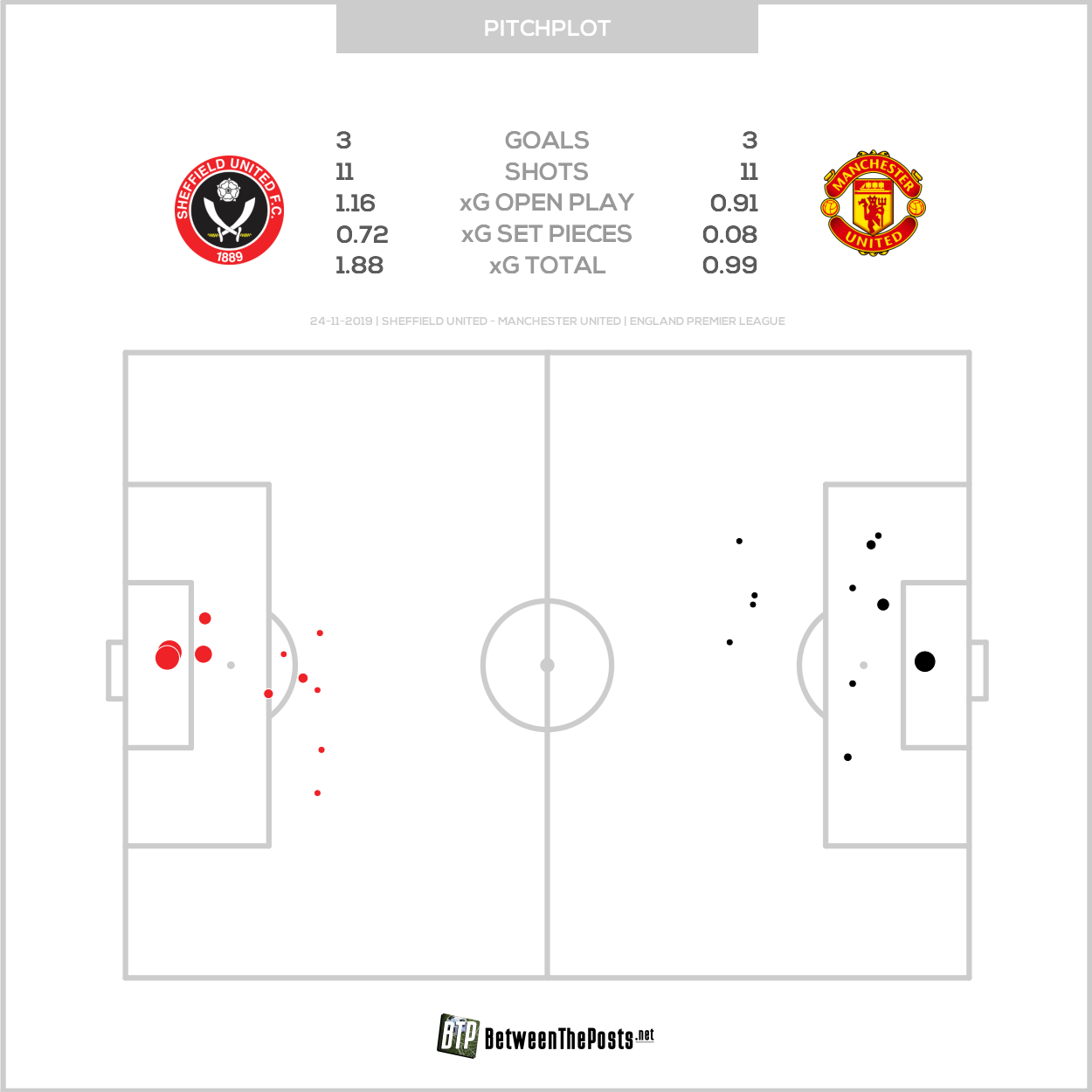 A crazy twenty minutes makes it difficult to evaluate what either team thinks of that game. Chris Wilder will certainly be impressed with the dominance and control Sheffield United had both on and off the ball. They were organized, set a high intensity, stuck to their shape but were also dynamic and could interchange when building down the flanks.

So many positives, but to give away the lead in such quick fashion must certainly leave a bitter taste. Regardless, Sheffield United go into December in sixth place, a trip to Wolverhampton Wanderers maybe a key battle in the race for the Europa League spots.

Manchester United struggled to get a foot in against a well-organized opponent, yet thoroughly deserved their goals after a few tactical changes. To drop the lead after a great comeback, especially after reverting into a more defensive structure, is comical. Ole Gunnar Solskjær needs to find away form and consistency if Manchester United are to test those above them. 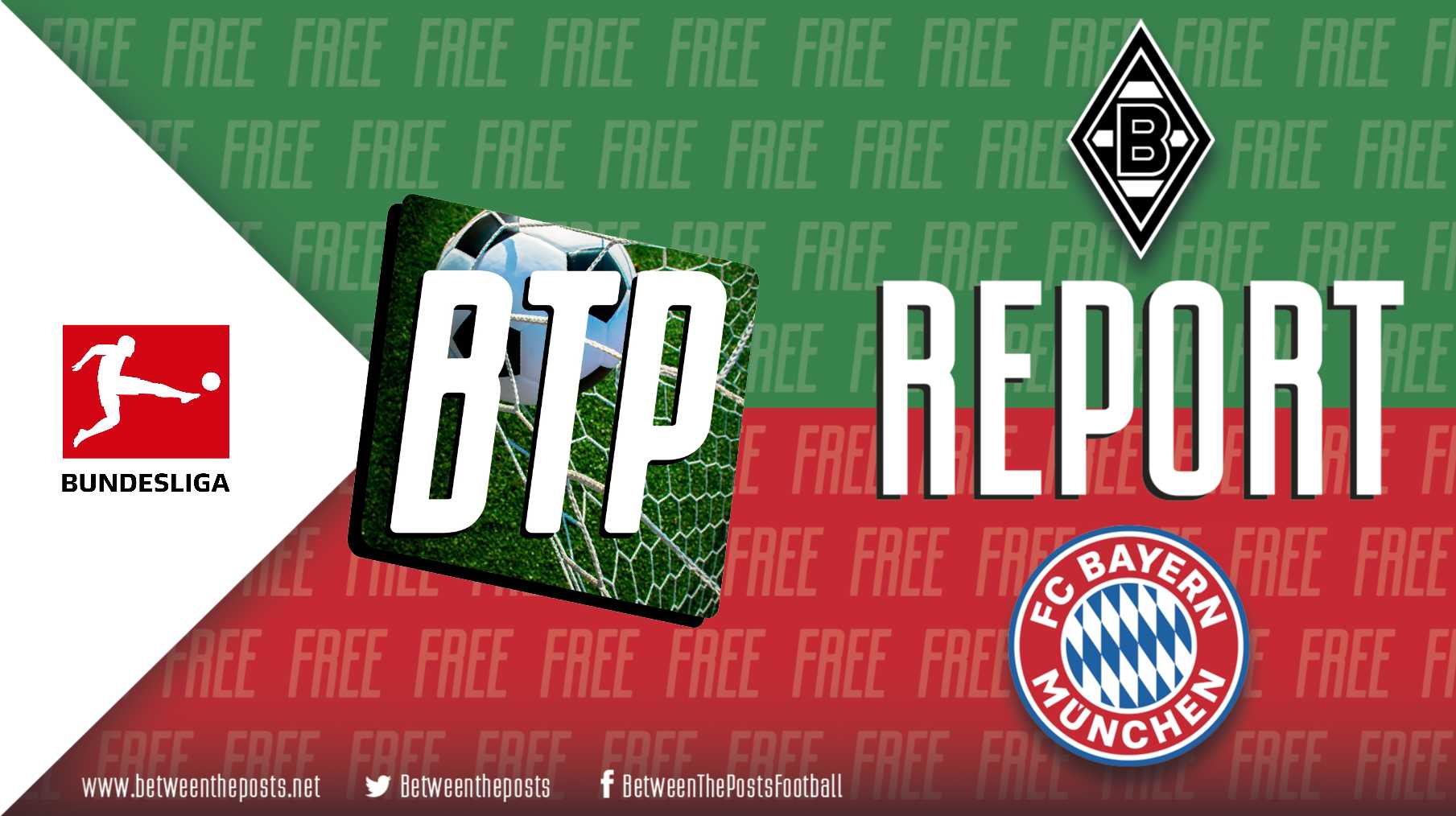