This battle between two attacking minded sides promised to be an action-packed Europa League quarter final. The game lived up its promises and was full of intense pressing. Although Frankfurt conceded a penalty and a red card after just twenty minutes, the match did not lose any suspense. Being one man down, Frankfurt stuck to their fast wing attacks, while Benfica saw more of the ball. In the end, Benfica won the first leg thanks to a clever system and a floating João Félix up front.

In Eintracht Frankfurt, SL Benfica faced one of the best attacks of this Europa League campaign. Benfica themselves were one of the most defensively solid sides of the competition so far. Moreover, the game was a battle between two coaches that follow a clear philosophy and an attacking minded style of play but also possess tactical versatility.

Benfica started into the match with a 4-2-3-1 formation which turned into a 4-4-2 shape in possession. Bruno Lage could not draw on the suspended attacker Jonas and on midfielder Gabriel Pires due to an injury. To the surprise of many, former Frankfurt player Haris Seferović was benched though. Instead, head coach Bruno Lage decided to line up youngster Gedson Fernandes as a playmaker behind the only striker João Félix. At the back, Lage decided to play with a line of four guided by captain and central defender Jardel.

Frankfurt manager Adi Hütter lined his side up in a 5-3-2 formation. Forward Sébastien Haller missed out due to an injury and was replaced by usual playmaker Ante Rebić. Therefore, Frankfurt played, different to their usual setup with one playmaker behind the striking duo, with Makoto Hasebe as a single pivot behind two advanced midfielders. Nevertheless, Hütter could still draw on unlimited resources on the wing-back positions with Danny da Costa on the right side and Filip Kostić on the left.

Especially in the opening stages of the game, Benfica struggled with Frankfurt’s high press. The Bundesliga team attempted to win the ball high up the pitch to quickly counterattack. Therefore, the striking duo pressed Benfica’s center-backs. Central midfielders Sebastian Rode and Gelson Fernandes marked the opposition double pivot. 4-2-3-1 is one of the most frequently occurring formations in football. The two most defensive midfielders are called a ‘double pivot’. As a consequence, Benfica were forced to play long balls in their buildup play. Since Frankfurt’s back-three dominated Benfica’s front line in heading ability, they were capable of winning the aerial duels and thereby quickly regaining possession.

In addition to their high press, Frankfurt also counterpressed After losing possession, a team immediately moves towards the ball as a unit to regain possession, or at least slow down the pace of the counterattack. the opposition after losing the ball within Benfica’s half. These concepts allowed the them to dominate the first ten minutes of the game.

Luka Jović took over the role of Frankfurt’s target man for long balls. Whenever short buildup play was impossible or seemed too risky, Frankfurt’s defenders played long balls towards the Serbian forward. One of the reasons for this was Benfica’s press. The Portuguese club tried to stop Frankfurt from playing out as well. In a man-oriented way, they shut down all passing options and forced goalkeeper Kevin Trapp to hit the ball long.

To build up, Benfica’s central midfielder Andreas Samaris dropped into the left back position to receive the ball on one side of the pitch. Benfica’s fullbacks pushed up high, while still providing full width. The idea behind this was to occupy the opposition wing-backs of Frankfurt’s back five in wide areas. Meanwhile, the wingers of the home side tucked inside. In this way, Benfica attempted to occupy the three central defenders of Frankfurt and enable one of their forwards to drop between the lines without being followed. 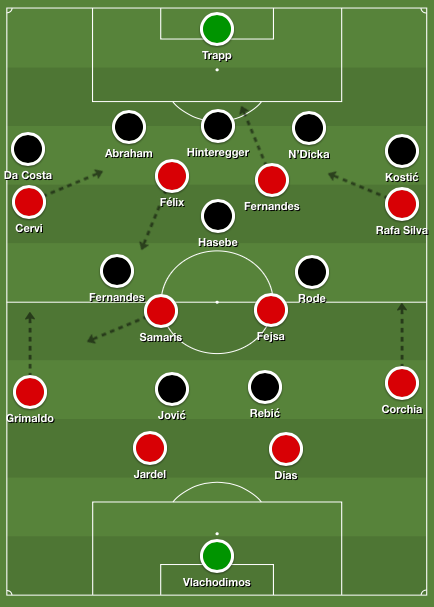 Bruno Lage’s concept was proven to be successful when Benfica created their first chance of the match which resulted in a penalty and a red card for Frankfurt’s central defender Evan N’Dicka. Before, Benfica could create a numerical equality against Frankfurt’s three center-backs. Left winger Franco Cervi as well as the depth providing Fernandes occupied opposition central defenders. This allowed striker Félix to receive and turn in a central area and thread the ball through Frankfurt’s back line towards Fernandes. His direct opponent N’Dicka caused a penalty and was sent off for the foul that took away a clear goal scoring opportunity from Benfica’s playmaker. Félix converted the penalty and therewith laid the foundation for Benfica’s win.

Occasionally, striker Félix drifted into the left halfspace and dropped into midfield while playmaker Fernandes provided depth. The high positioning of Benfica’s wingers prevented Frankfurt’s center-backs to follow the opposition attackers. Exactly this movement introduced Benfica’s second goal later in the match. Félix could receive, turn and shoot in the left halfspace while left winger Cervi and Fernandes dragged away Frankfurt’s defenders. 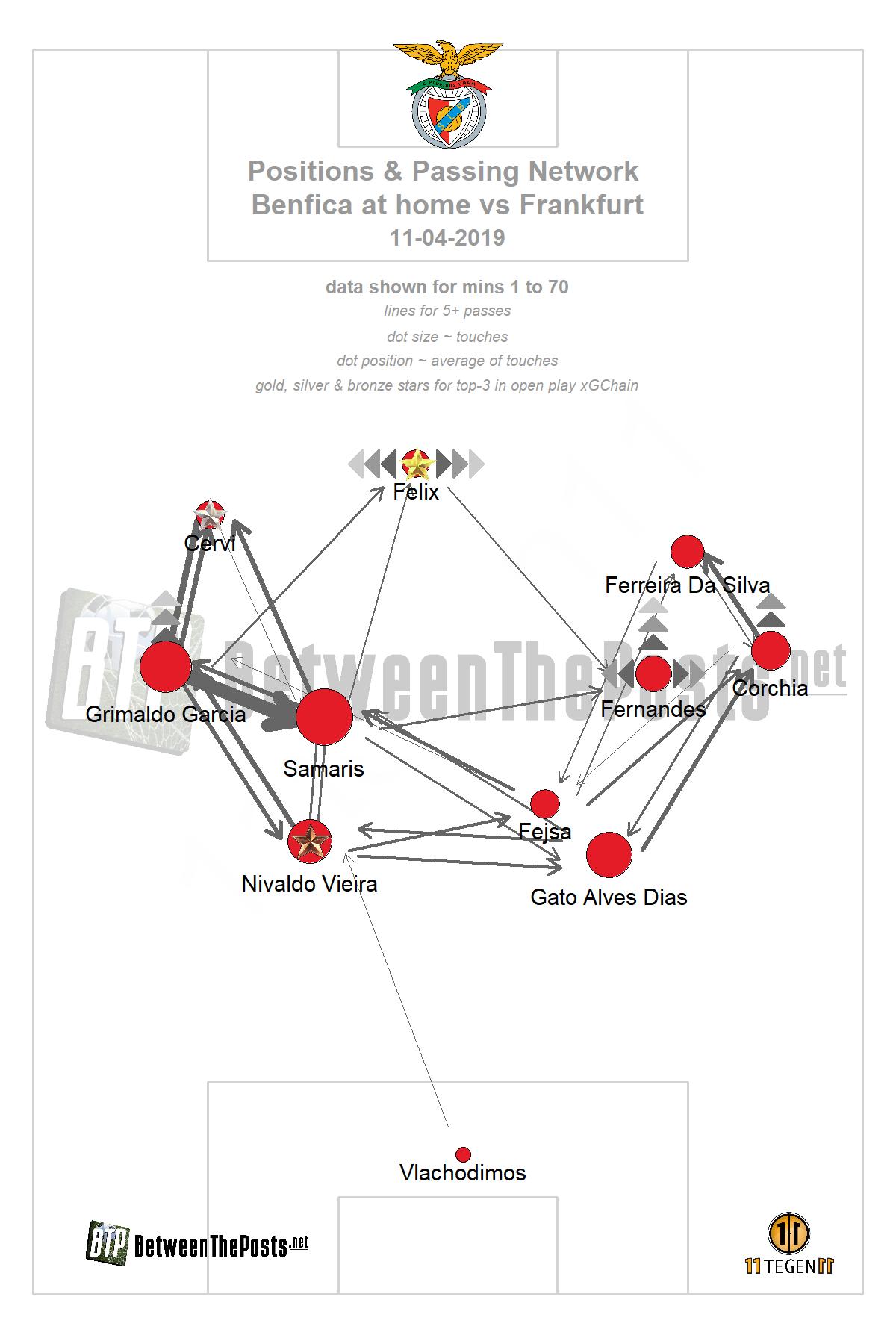 Although playing with only ten men, Frankfurt kept playing with a back five. As their system would not provide enough width in the attacking department when playing with a single striker, Hütter decided to take out their playmaker. That left only two central midfielders and thereby changed Frankfurt’s press.

With one less player, Frankfurt could not maintain their high press with the same success rate. Since Hasebe moved into the back line, there was no cover in midfield for Rode and Fernandes. That is why both of them could not move forward to press at the same time. This allowed central defensive midfielder Samaris to pull the strings for Benfica.

However, Frankfurt were capable of situationally forcing Benfica to commit mistakes in the buildup stage.

Central midfielder Ljubomir Fejsa, for instance, lost the ball to midfielder Rode. This led to a Frankfurt counterattack which resulted in the equalizer. In this situation, Hütter’s decision to keep playing with two attackers paid off as both Rebić and Jović outplayed the opposition central defense before combining for the goal.

Nevertheless, it was obvious that Frankfurt’s press also had a downside. Once Benfica had overplayed Frankfurt’s initial press on one side, Frankfurt offered much space on the other side of the pitch. That was owed to the fact that Frankfurt missed width with only two players in their first line of press and their midfield. When Benfica switched sides, they could easily exploit their numerical superiority.

By creating a two-versus-one situation against wing-back Da Costa, Benfica could break through on the wing. Ten minutes into the second half, Félix utilised the gap between the back line and the opposition midfielders to receive and score his third goal of the night.

After that goal, Frankfurt changed to a 5-3-1 setup as one of their strikers completed the midfield to a line of three. This change gave Frankfurt a bit more stability. Of course this also meant they could not press high up the pitch anymore and opted to defend their goal within their own half. 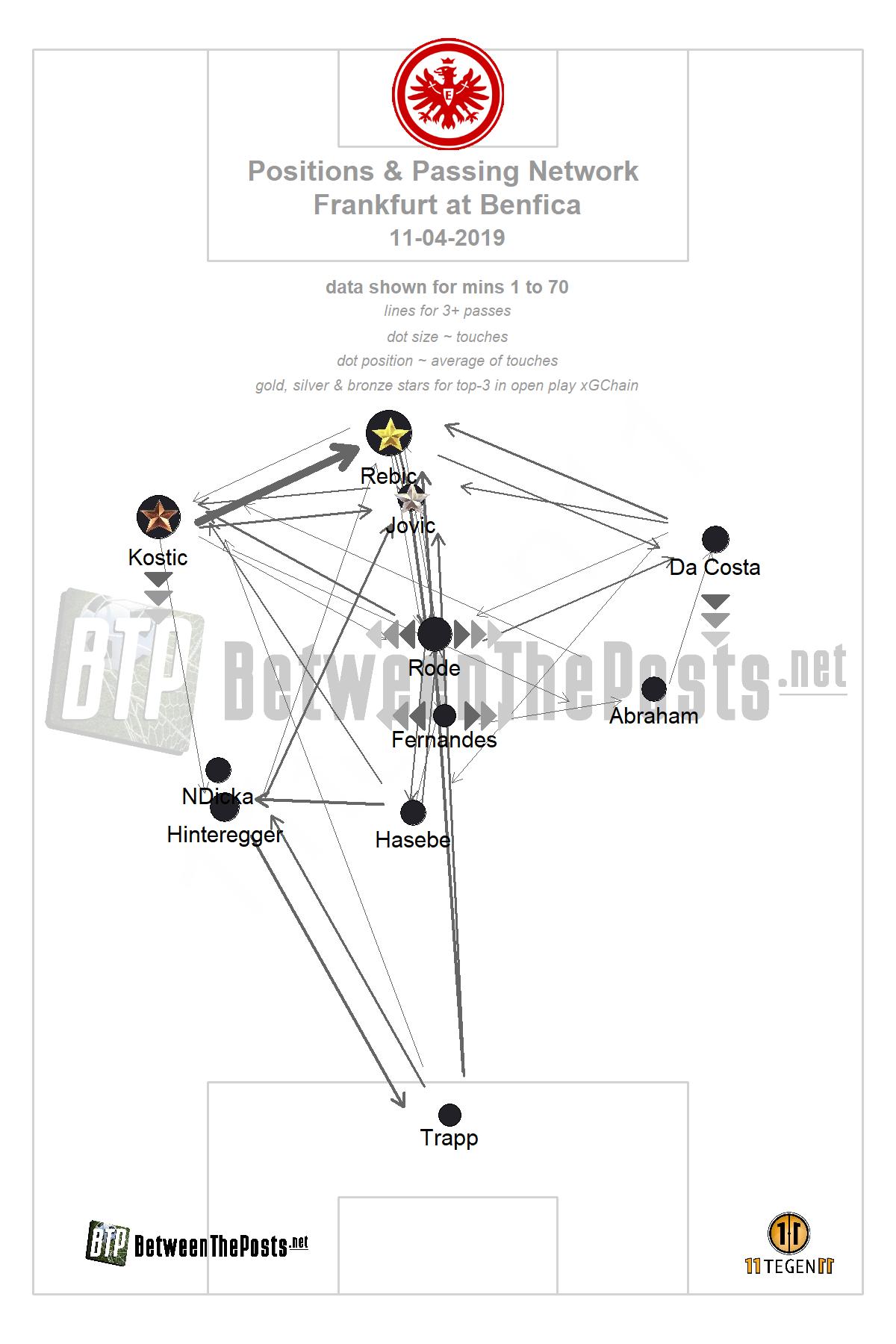 Since Frankfurt banked on breaking through on one wing to put in crosses, their attacking phase did not suffer too much from the loss of one player. Especially left wing-back Filip Kostić put in a lot of crosses after receiving the ball in advanced areas. The positioning of Frankfurt’s ball far wing-back played a part in contributing to the compensation of their missing player.

Whenever Frankfurt attacked on the left wing, right wing-back Da Costa tucked inside, giving up the option to switch sides. As a logical result, the possession phases of Frankfurt became shorter. Nevertheless, Frankfurt still created chances. As Hütter’s side aimed at finishing the attack in these cases anyways, Frankfurt could at least provide a further passing option in the penalty area.

In the final stages of the game, being three goals down, Adi Hütter brought in a player who was supposed to increase Frankfurt’s attacking threat. In Gonçalo Paciência, he introduced a tall number nine with heading ability. This paid off only minutes later when the Portuguese striker scored after a corner-kick and therewith shortened the score for Frankfurt and kept the tie alive. 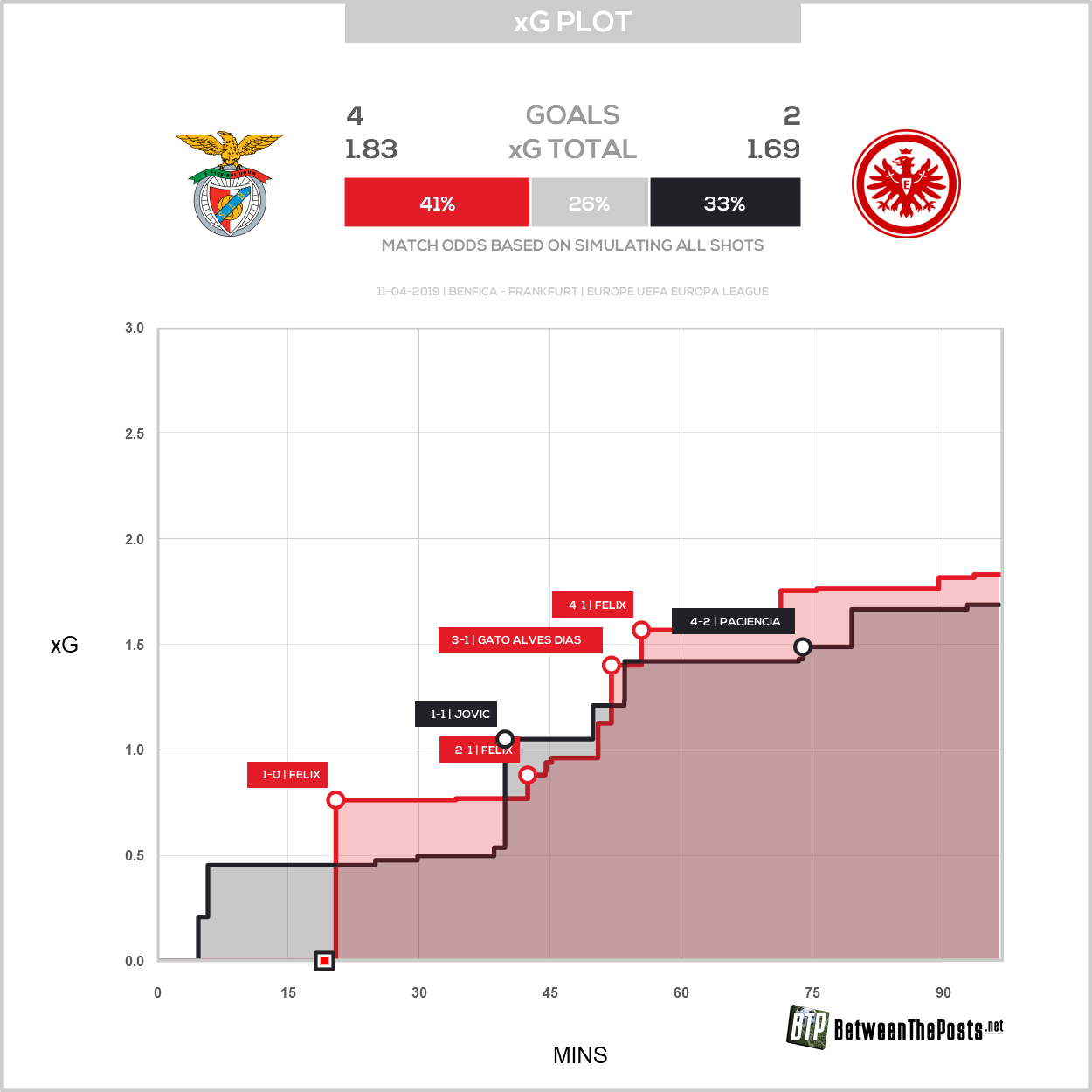 All in all, Benfica’s clever movements with narrow wingers and a floating João Félix allowed them to penetrate Frankfurt’s back line. In a match that was obviously heavily influenced by the early penalty-with-red-card situation, Benfica were highly efficient in front of the opposition goal and thereby gained the pole position with regard to the second leg game.

Even when playing with ten men, Frankfurt stuck to their philosophy and could still threaten Benfica’s goal several times with dangerous wing attacks. Thanks to Gonçalo Paciência’s unexpected late goal, Eintracht Frankfurt still have some chance to qualify for the next round. 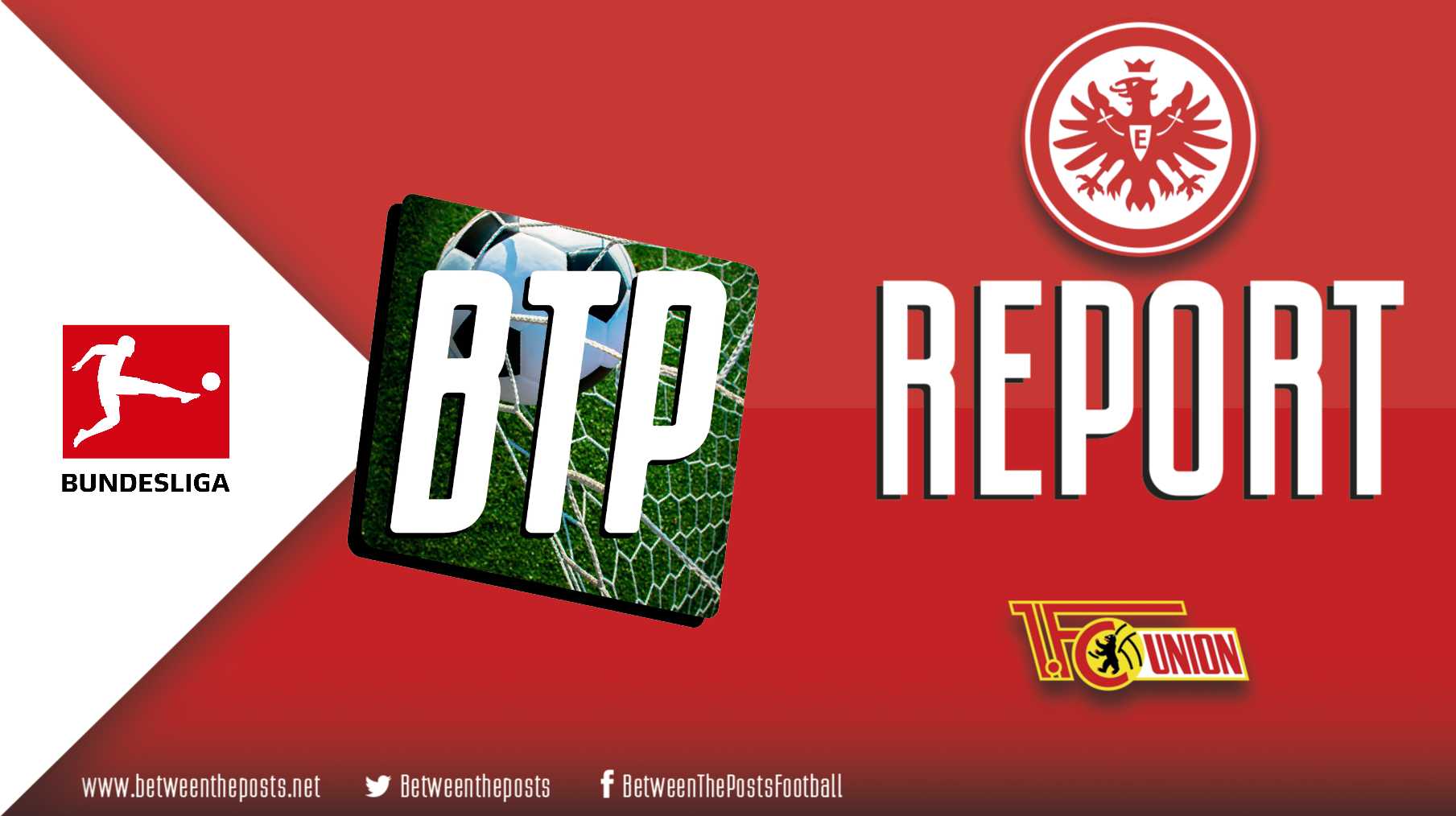