Monopolization of the ball, field territory, but missed chances aplenty. For a moment, it looked as if Spain would repeat the mistakes from their two first games. This time, they took their chances better, just when they needed it the most. Stealing a march on their visitors thanks to a twist of fate, Spain cantered to victory, doing the job expected of them to get out of their group.

Ninety minutes stood between Slovakia and a possible spot in the Round of 16. Despite a narrow one goal loss to Sweden last time out, the away team sat in second place in the group coming into the final round of fixtures. Fighting to win three points against Poland to open their campaign, they hoped to pull out a similar result against an almost inevitable torrent of pressure.

On the other hand, Spain came into this game with little to gain but everything to lose. Dominating both territory and the play, a meager goal and two points from their first two games of EURO 2020 are far from an ideal outcome. The heat was on for the favorites of Group E to make their dominance count.

Slovak manager Štefan Tarkovič lined up his men in a 4-2-3-1 system. He then made two tweaks to the starting eleven that lost last time out to Sweden. Martin Koscelník made way for Lukáš Haraslín on the right wing and Jakub Hromada joined Juraj Kucka in the double pivot. Two central midfielders next to each other.

As one would expect, Luis Enrique set up Spain in a 4-3-3 shape. However, he bit the bullet on the lineup, making four changes to the side that faced Poland. Gerard Moreno moved to the left wing in place of Dani Olmo, leaving Pablo Sarabia to start on the right. Sergio Busquets then came back in for Rodri at the heart of the midfield. Finally, Aymeric Laporte moved to left center-back, flanked by Eric García and César Azpilicueta to his right, both making their first starts in the tournament.

Spain’s luck is out

The opening stages of this game went as one would imagine. Slovakia set up in a 4-2-3-1 formation, sitting off in their half of the field. In the meantime, Spain did what they always do. Lots of short passing,, the ball flowing from side to side, and players looking for runs into the channels behind the fullbacks.

Álvaro Morata also came to the fore this time, again helping his team’s ball-retention. Dropping off into the gap between the double pivot, he often ended up as a free man. From here, he would then receive passes in space, especially if they cut diagonally through Slovakia’s block. Forcing the issue, the hosts got off to a swift opening and had the chance to make the perfect start just over ten minutes into the game.

17th minute: a typical tactical interaction around Spain’s possession game. Koke moves deep into the channel, forcing Kucka to absorb the run, and drawing the attention of Milan Škriniar. Morata then drops between the lines, receives a pass from Azpilicueta and plays the ball first time into Busquets.

Inside his box, Hromada swung to clear the danger but did not catch a glance of Koke in his blindside. The midfielder nipped in to steal possession, reaching the ball first to draw contact from his opposite man. The referee initially did not award a penalty, but after intervention from VAR, the call swung in favor of Enrique’s men.

The question would be who would take on the mantle from twelve yards. Moreno took a penalty last time out but missed, leaving Morata to take matters into his hands. The striker hit a firm effort to his left, but goalkeeper Martin Dúbvraka was equal to his shot, palming the ball away to keep the two teams level. Pedri and Sarabia both went on to spurn chances, cranking up the tension inside the stadium.

Luckily for them, just under half an hour into the contest, Slovakia had to bestow their hosts. Building the play out from the back, Ľubomír Šatka looked to switch the ball through Spain’s high pressing setup, only for Sarabia to cut out the pass. Ending up free in space on the edge of the box, Sarabia edged closer to goal before firing a left footed shot past Dúbvraka, but the ball cannoned off the bar. Danger averted. Or so it seemed. 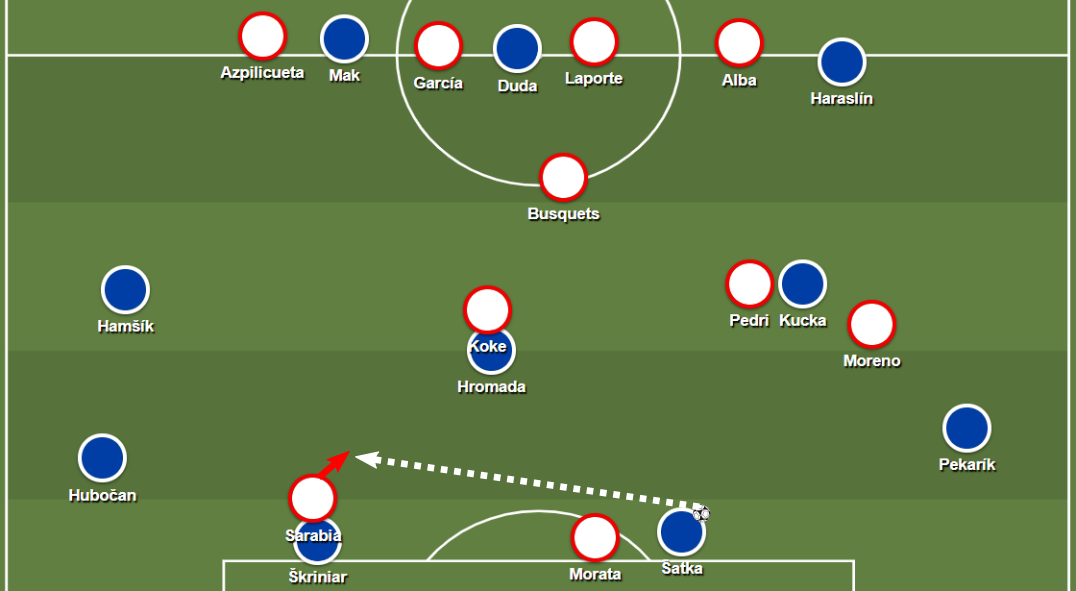 30th minute: Spain’s high pressing scheme before the first goal. The front three set up asymmetrically, as Sarabia is higher than Moreno on the left, while the central midfielders track their men behind.

The man between the posts scrambled back to the line, watching as the shot looped above the net. Jumping to cope with the danger, the goalkeeper could only palm the ball into the back of the net. An egregious mishap proved to be the bit of fortune Spain were hoping for, handing them the initiative. Spain kept on probing, and luck was well and truly in on the stroke of half time.

Koke whipped a delivery into the box from a corner, but the visitors managed the first phase. Pedri then picked up the pieces, dinking a pass in behind to Moreno. The winger beat Dúbvraka to the ball, standing a cross up into the six yard box, where Laporte guided a header beyond the reach of the goalkeeper to double his side’s lead. The insurance policy absent against Poland was now in the bag, leaving Enrique’s men in a boisterous mood.

As his players went out for the second half, Tarkovič made a double substitution. Michal Ďuriš was a straight swap for Duda as the point man upfront while Stanislav Lobotka replaced Hromada in the midfield.

With his side’s three goal margin of lead still in the bag, Enrique made his first substitution in the 65th minute. Morata made way for Torres, who again played through the middle upfront. Fresh legs were the last thing this Slovak side would have wished to face, and so it transpired in a matter of moments.

From the next phase of play at a corner, Koke played the set piece short to Sarabia. The right winger then played a one-two combination with Pedri, who slid his teammate back in behind through the channel. From here, Sarabia flashed a cross along the face of the goal, where Torres nonchalantly flicked the ball with his heel into the back of the net.

Moments after, Pau Torres came on for García, while Thiago Alcântara replaced Busquets. Four goals then turned into five, as the central defender nearly matched the feat of his namesake. Moreno then tossed a free kick from the left wing into the six yard box. Škriniar headed the delivery clear, but Thiago volleyed the ball back into the area. Cue aerial chaos.

Laporte made the most of Slovakia’s inability to deal with the second phase, finding his partner at the back, who directed a header at the goal. Dúbvraka did his best to deflect the effort short of the line, but Kucka’s attempt to sweep up behind him saw the midfielder bury the ball in his own net.

More changes to personnel and positions soon followed. Enrique swapped Mikel Oyarzabal for Moreno, and Adama Traoré for Azpilicueta. The 4-3-3 shape stayed as it was, but the back four and front three had a new look. Laporte had already slid over to the right of the central defense, while Traoré came on at right back. Further afield, Torres shifted from striker to the left wing while Oyarzabal played down the middle upfront.

From the right, on the ball, Koke now continually sat deep in the halfspace. If you divide the field in five vertical lanes, the halfspaces are the lanes that are not on the wing and not in the center. Because there is no touchline like on the wing, players have the freedom to go everywhere. But this zone often is not as well-defended as the very center. This makes it a very valuable offensive zone to play in and a lot of chances are created by passes or dribbles from the halfspace. Traoré, in turn, had the license to stay high and wide on the flank and look for direct dribbling duels against Tomáš Hubočan. Such experimentation may end up being useful going forwards, but it bore no influence on the final scoreline. Spain eased through the final phase of the match, sealing a critical result. 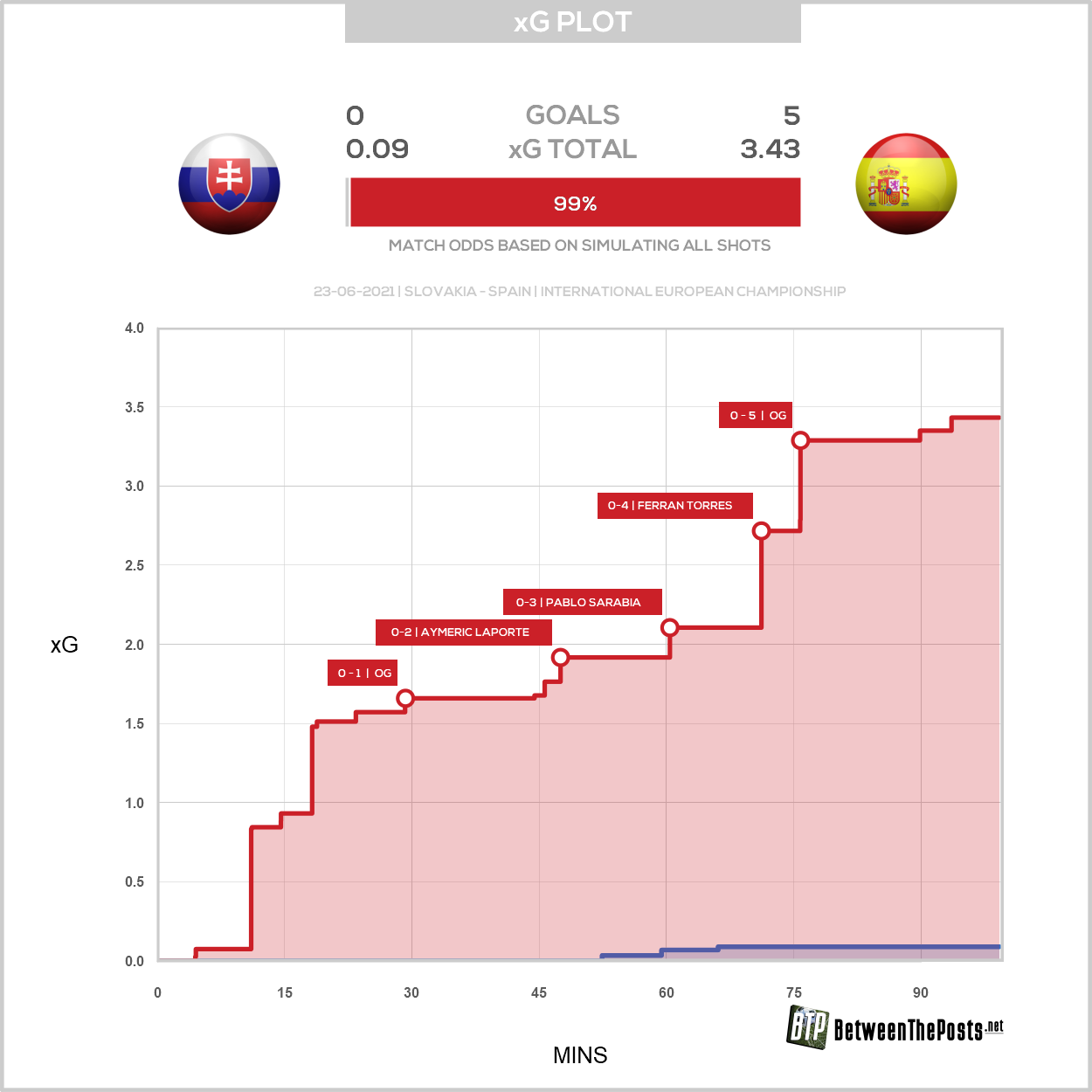 The loss saw Slovakia come up marginally short in the final standings, crashing out as one of the two worst third placed teams in the group stages based on goal difference. Defensive frailties proved to be costly as the team could not hold back the floodgates while leaving Spain in an intriguing position.

Enrique’s men got the result they wanted but finished second in the group due to Sweden’s last gasp win over Poland. But without the incision to be an explosive outfit, their campaign has almost gone to script. Now a contest with Croatia, and a stellar midfield on paper, awaits. If the upturns of Spain’s strategy can give it the competitive edge the nation is seeking, this match will be the time to prove it. 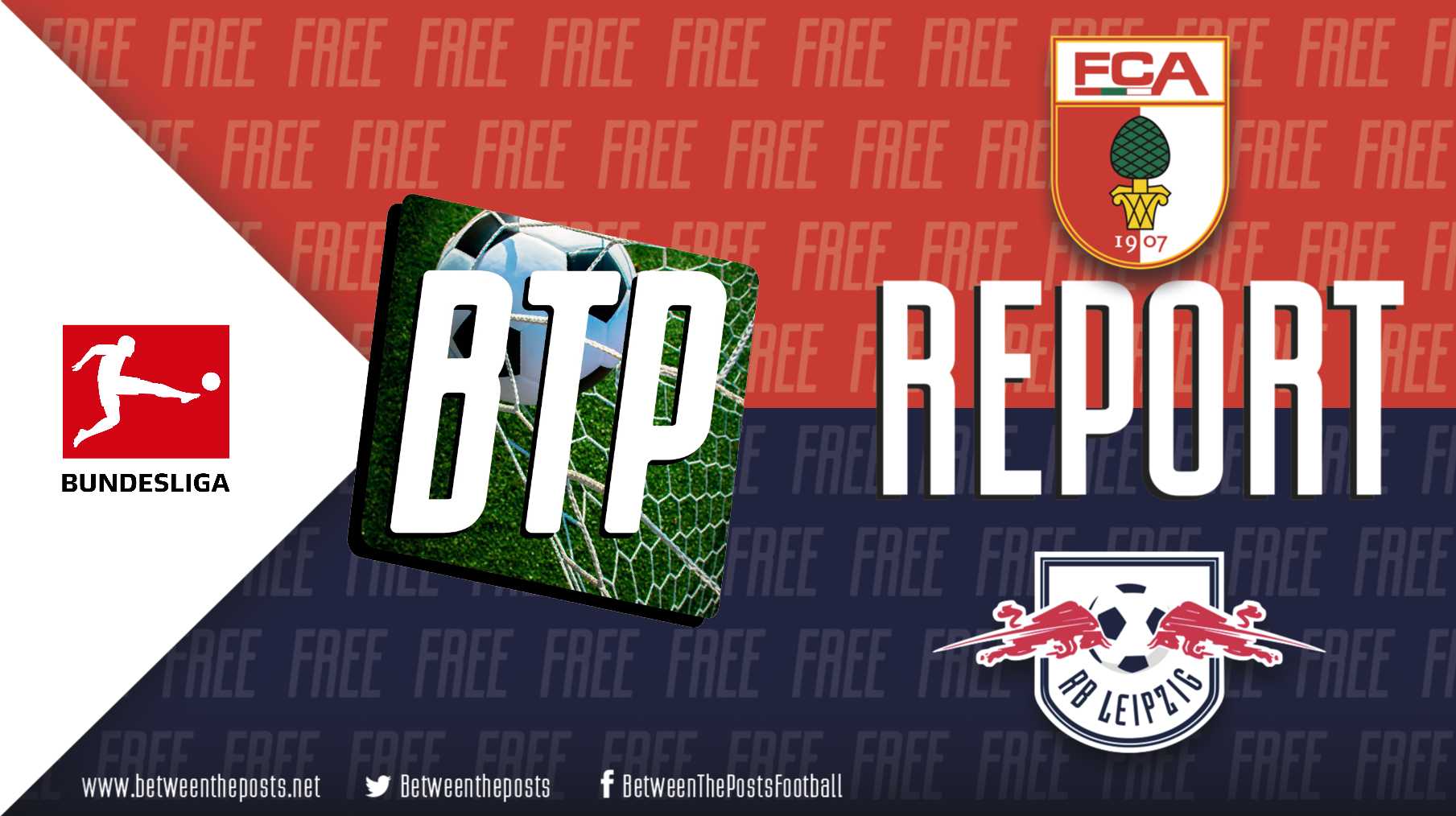