England enter EURO 2020 with the weight of expectation behind them once again, as they boast one of the most talented attacks at the tournament. However, much of their success depends on whether Gareth Southgate will be able to find the right tactical balance.

England’s semi-final exit in the 2018 World Cup was the furthest stage they had reached in an international tournament since EURO 96. Gareth Southgate, in his first major tournament as England coach, had created a tactically solid team, certainly compared to the low standards set by the coaches before him.

However, there are also caveats to England’s efforts three years ago. England received a favourable draw in Russia, which allowed them to avoid many of the big names, instead facing Colombia and Sweden in the knockout stages, before their semi-final defeat against Croatia. Furthermore, although the 3-5-2 system deployed by Southgate was certainly a refreshing change, there were still issues in its implementation which saw England struggle to create in front of goal. Two statistics illustrate this point quite bluntly – in total that tournament, England scored three goals from open play, landing only six shots on target in ten hours of football before being eliminated.

Clearly, there is room for improvement for England despite a good tournament placing last time out. Luckily, this is exactly what has happened to England’s selection pool since 2018 in terms of personnel. The last couple of years has seen the emergence of several attacking talents for England, meaning that firepower going forward is no excuse this time around.

Southgate’s twenty-six man squad boasts two of Europe’s most exciting and dynamic attacking midfielders currently in Mason Mount and Phil Foden, who have both performed to very high levels in the Champions League this season. There is also the flair of Jack Grealish and Jadon Sancho, the versatile and technically skilled Bukayo Saka, and target man Dominic Calvert-Lewin.

None of the players mentioned above were in the squad three years ago, giving Southgate a lot to think about – in a positive sense – in the attacking department. He also has three attackers who were already with the squad in 2018. Harry Kane comes into the tournament after leading the Premier League in terms of both goals and assists this season, having developed an extremely strong playmaking ability to add to his skillset. Raheem Sterling has not had his strongest season for Manchester City, but adds clear threat in wide areas nevertheless. Lastly, there is Marcus Rashford, who’s form has unfortunately dipped in the latter stretch of the season for Manchester United. Rashford has quite clearly been playing through fatigue and injury during this period, and it is unclear exactly how good a shape he will be in for the tournament.

Looking to the midfield area, another young talent in the form of Jude Bellingham catches the attention, having impressed with Borussia Dortmund and put forward a further case for a starting spot in the recent friendly against Austria. Bellingham is probably the most attack minded of the options in midfield other than Mount. The other players in contention here are Declan Rice, Kalvin Phillips and Jordan Henderson.

Rice looks very likely to start as the deepest midfielder, regardless of England’s system, with Southgate seemingly trusting him as a safe pair of hands in the number six position. Phillips makes a capable addition in this area, while Henderson may not be seen at all until at least the knockout stages while he recovers from injury. Taking this into account, Henderson’s leadership qualities off the pitch are probably part of what kept him in the squad as much as his playing talents.

In the defensive positions, plenty of debate was generated by Southgate’s decision to name four nominal right backs in the squad. The debate was pretty short-lived, since Trent Alexander-Arnold limped off the pitch at the Riverside Stadium barely twenty-four hours later, having sustained a thigh injury which will keep him out of the tournament.

Reece James and Kieran Trippier are two other options who are adept at playing at either fullback in a back four, or as wing-backs in a five. Similar can be said for Luke Shaw and Ben Chilwell on the left.  The other nominal fullback option for England is Kyle Walker, however he should perhaps be seen just as much as a center-back option – specifically as a right center-back in a back three, the role he played in 2018.

The first-choice players to accompany Walker in a possible back three would doubtless be John Stones and Harry Maguire. Stones comes into the tournament after probably his best season yet, establishing himself as a reliable defender for Pep Guardiola at City. Maguire has also had a strong season, and his injury presents a headache for Southgate given his importance to England’s defense. The alternatives are Conor Coady and Tyrone Mings, both decent Premier League level defenders, but unproven at the elite level in Europe.

Finally, moving to the goalkeepers, the two main contenders here are Jordan Pickford and Dean Henderson, with Sam Johnstone likely to be firmly a third-choice contender. Despite Henderson’s talents as a shot-stopper, Southgate seems to show a preference towards Pickford for the number one jersey, perhaps in large part due to Pickford’s distribution with his feet.

Who’s going on the back of your #ThreeLions shirt?

Since around a decade ago, the youth development framework within the English FA has explicitly promoted the idea of England becoming a team which can control possession at the highest level, trying to leave behind the simplistic and direct style of football typically associated with England in the past.

The delayed impact of this has transferred at least somewhat into the senior team over the last couple of years, overseen by Southgate. England generally seek to play a controlled possession game which has stability as one of its highest priorities, while also being adaptable enough to play on the counter when situationally appropriate.

Without the ball, England like to press high where possible, however stability is once again a priority here, and accordingly they are happy to spend spells of a game in a settled and compact mid-block if necessary and appropriate. The overall focus on stability in big games may be advantageous in tournament football, where luck and variance can play a large role, meaning that low-risk playing styles may be considered wise.

After the 2018 World Cup, Southgate went away from the 3-5-2 system and instead tended to use a 4-3-3 system throughout most of Euro 2020 qualifying and the 2019 Nations League. In the 2019 Nations League finals, England’s 4-3-3 system struggled against a man-oriented press and looked rather rigid. Southgate, who has been rightly criticised in the past as being unable to adapt within games, was able to do so on this occasion and switched to a 4-2-3-1 shape.

In Euro 2020 qualifying, the 4-3-3 system tended to fare a bit better. One of the stronger features of the system as it was implemented in those games was the fluid rotations, primarily involving the fullback, central midfielder and winger on each side, which created good dynamics for England in wide areas to help create breakthroughs. 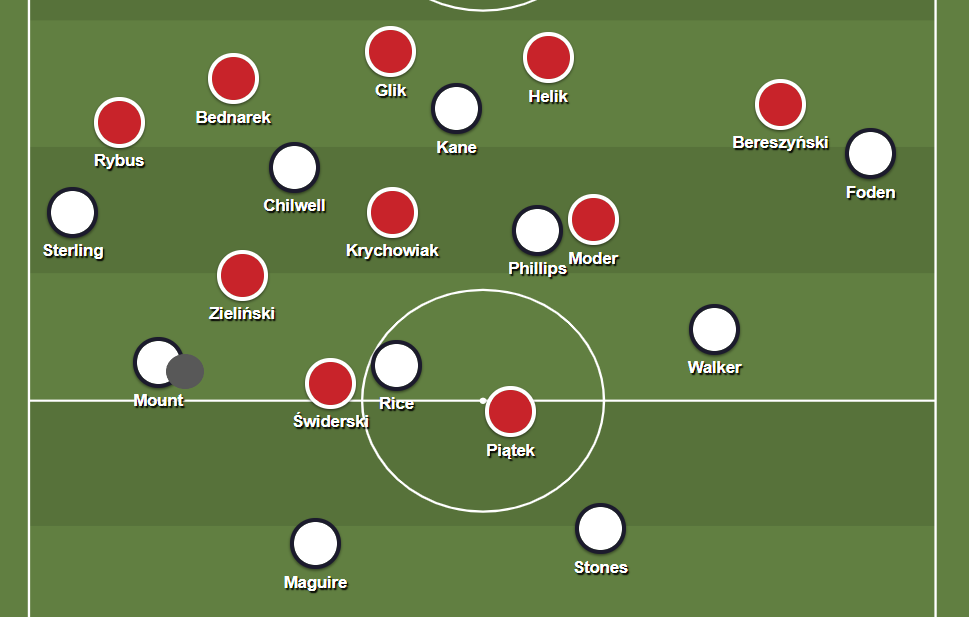 England’s 4-3-3 against Poland earlier this year: example of rotations on the wing.

The game against Poland earlier this year saw Phillips and Mount being used as number eights in this system, however the emergence of Bellingham may be useful here, as number eight is perhaps not the most suitable role for Phillips. The options on the wings for England in this system are plentiful, as Foden, Sancho, Sterling, Rashford and Grealish would all be in contention, and could be used in different situations depending on the required characteristics. Kane is also very capable of operating as the lone striker in this type of system.

In the most recent Nations League campaign in late 2020 though, Southgate returned to using a back three (aside from the opening match), this time with a 3-4-3 system. Southgate has made it clear that he wants the option of using a back three or a back four depending on the circumstances, and it would not be too surprising to see England using a back three in the upcoming tournament, especially for big games. 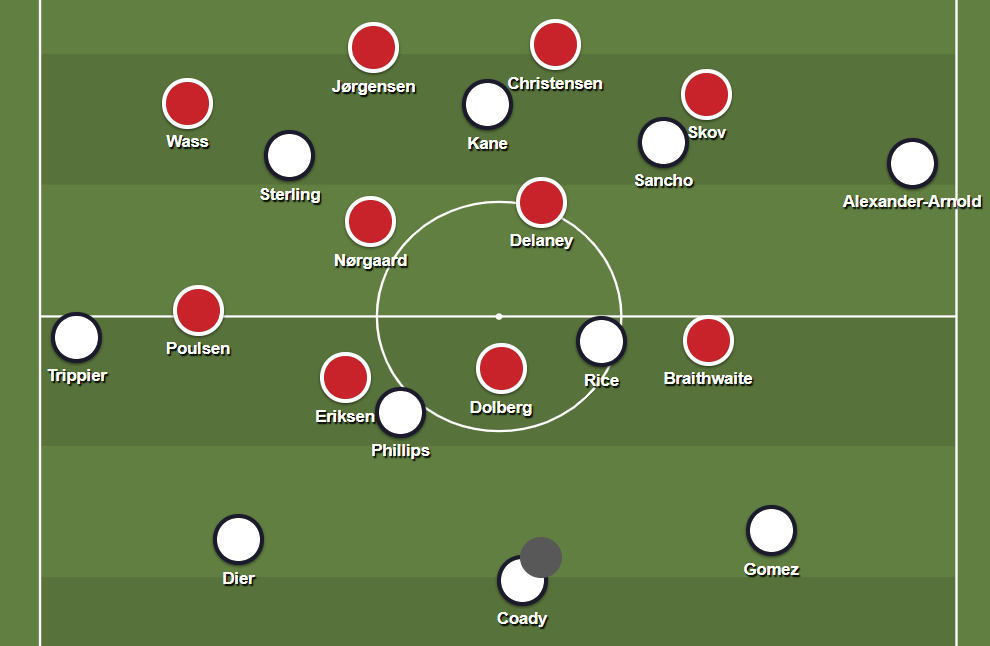 England’s 3-4-3 against Denmark in the Nations League.

The 3-4-3 system used in the Nations League was not without problems in its implementation though, and England ultimately crashed out against Belgium. In particular, there were issues with ball progression in central midfield, where the selection of two fairly cautious central midfielders with three centre-backs already behind them meant that the structure and tempo of England’s possession was not always great.

On the other hand, the 3-4-3 shape did give good roles for the number tens, and there was the potential for promising interactions between them and the wing-backs. This system might be especially suitable for Grealish to play as one of the number tens, in the left halfspace, If you divide the field in five vertical lanes, the halfspaces are the lanes that are not on the wing and not in the center. Because there is no touchline like on the wing, players have the freedom to go everywhere. But this zone often is not as well-defended as the very center. This makes it a very valuable offensive zone to play in and a lot of chances are created by passes or dribbles from the halfspace. where he adds a lot of creativity for England. The likes of Foden and Mount would also be very suitable for these roles.

One of the biggest problems for Southgate to consider is the fitness of Maguire, who faces a battle to be fit for the tournament. If Southgate has to proceed without Maguire, how may this affect his selection? Perhaps it may make him lean towards a back three, seeking the security of an extra central defender to compensate for missing the commanding presence of Maguire? Or maybe he will trust another player such as Mings to play in a pairing alongside Stones, allowing for the selection of an extra attacking player.

The first warmup friendly against Austria last week saw Southgate go with neither a 4-3-3 or 3-4-3 system, and instead use a 4-2-3-1 shape. Whether this reveals much about his intentions in the actual tournament is down to interpretation. The performance against Austria was not England’s finest, and Southgate earlier in his tenure showed an ability to make somewhat of a mess of coaching a 4-2-3-1 system. On the other hand, he has shown improvement as a coach since then, and the implementation against Austria was not nearly as bad as the past example. So perhaps the 4-2-3-1 system is a viable option for England, especially with their attacking options. The only thing that is certain is that Southgate faces a very complex range of decisions with tactics and personnel.

England come into this tournament with a fearsome selection of attacking talent, but with varying quality and depth in other areas of the pitch. The big question is whether Southgate is able to find the right system(s) to integrate their attacking talents, while also keeping the focus on the defensive stability necessary to win in tournament football. 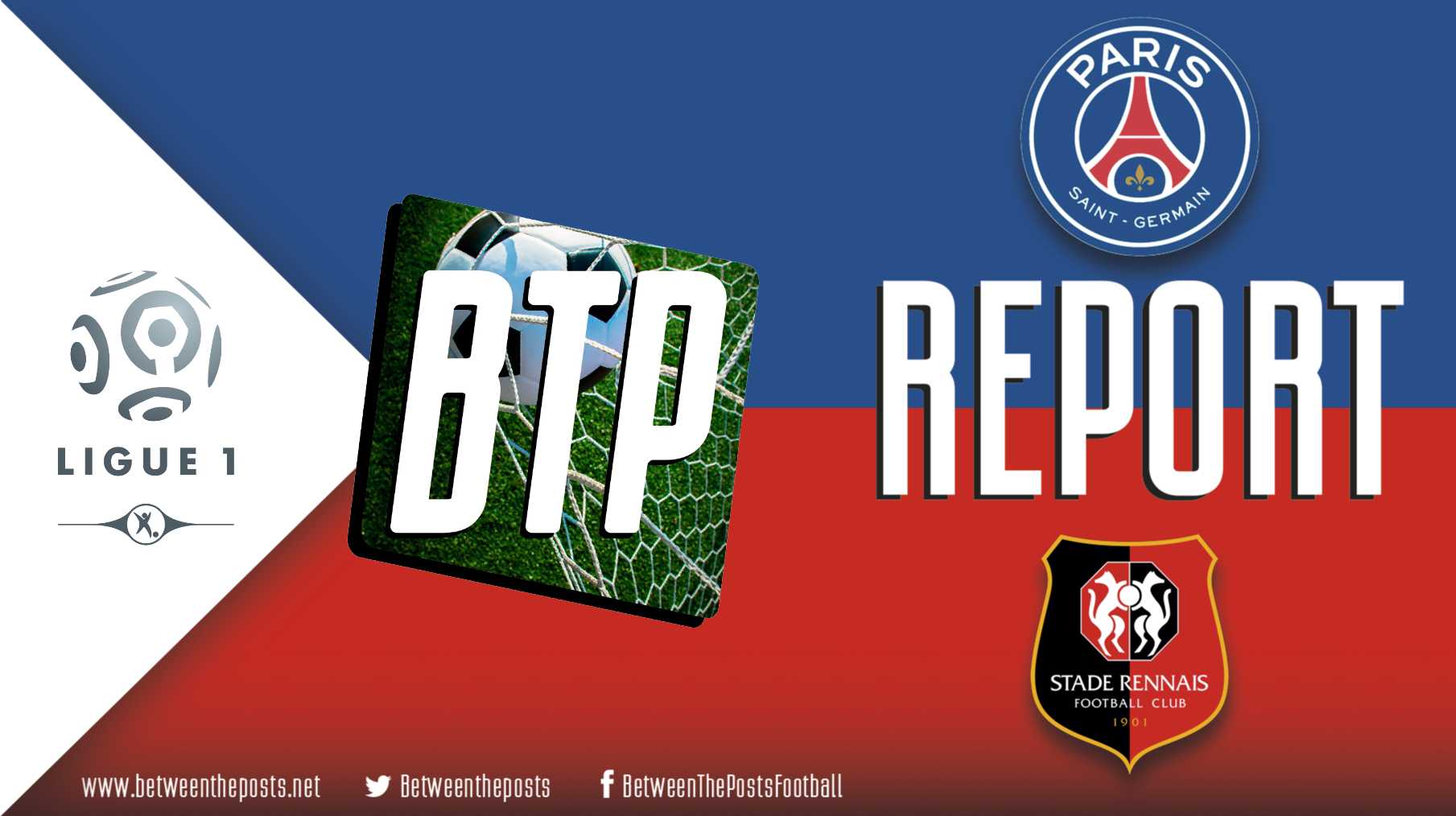