How do you crack a disciplined, determined 4-4-2 block? In the ultimate form of attack versus defense, Sweden forced Spain to grapple with this task once more. What followed was a low scoring but intriguing affair between two of the most organized outfits on the national circuit, setting the stage for a divisive figure to remind everyone of his value to La Roja at the death.

This fixture saw two familiar foes fight it out for top spot in Group B. But history cautioned neutrals not to expect fireworks; tense meetings in the past find their root in contrasting but coherent identities.

Spain have mastered a stable but systematic take on their ball dominant style under Luis Enrique. The result? On the one hand, even at the highest level, it is tough to find a nation that can rival this outfit’s ability to control territory. On the other hand, goals can be hard to come by, especially in the face of an equally systematic block. No shock then that of recent the guests have been a thorn in their side.

Janne Andersson has abided by the mantra of not tampering with a winning formula. Though his men bowed out prematurely in the Round of 16 at EURO 2020, a stalemate with the Spanish to kick off their campaign asserted the strength of their deep defending. So having threatened to finish in pole position thanks largely to a 2-1 win over the home team in September, could they repeat the feat?

Enrique lined up his men in a 4-3-3 formation. Six new names came into the starting eleven off the back of a single goal victory over Greece in midweek. Among those were Dani Olmo, who featured out on the left of the front three, pushing Raúl de Tomás into a natural role as the striker. Elsewhere, Carlos Soler took the place of Koke in the midfield, hoping to cash in against the Swedes once more.

Enrique’s opposite man Andersson went for a standard 4-4-2 shape. A 2-0 loss to Georgia last time out was a crushing setback, but the manager made only two alterations to the lineup for this clash. Mattias Svanberg made way for Albin Ekdal as the other member of the double pivot with Kristoffer Olsson. Upfront, the notable team news saw enigmatic figure Zlatan Ibrahimović drop to the bench.

Andersson’s second switch was fitting in the context of his team’s game plan. For all Ibrahimović’s value, he has never been the fastest over the ground. Hence, Dejan Kulusevski came into the fold, marking the first time he, Emil Forsberg, and Alexander Isak all played against Spain. The selection of this talented, more mobile trident aimed to strike on the break and build upon the solid work that the collective did in a deep 4-4-2 block. In a word, Sweden knew their role, completely waiving the risk of the more playful, calm style they have developed on the ball since the 2018 World Cup.

And execute them to a tee

Nor was it any surprise to see the Swedes’ classic setup shut down the hosts. They dropped off into a 4-4-2 block, setting their line of confrontation near the halfway line. Here, the front two of Kulusevski and Isak maintained tight coverage around Sergio Busquets. The wingers would tuck inward to create a narrow, ball-oriented system, while the double pivot stayed connected to the back four.

From here, typical pressing traps could emerge. The front two, particularly Isak, could guide the play out to the flanks, where they would pin down the fullback. But the real goal of their medium block, which quickly transpired, was to invite passes into Busquets, turn over the play, and transition to counter from the center of the pitch. 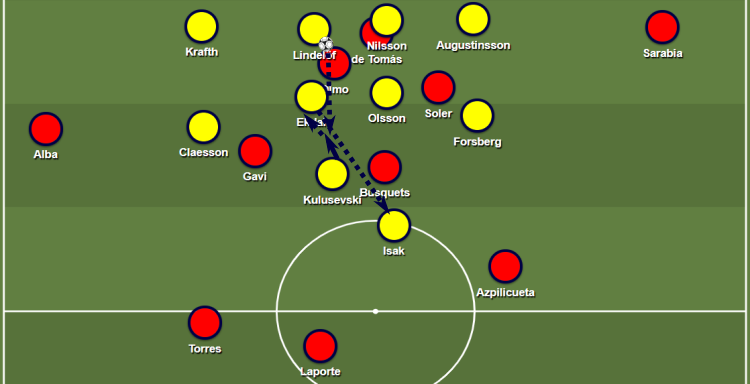 12th minute: Transitional sequence from Sweden in the first half. Victor Lindelöf intercepts the play, prodding it to Kulusevski. The forward immediately spins wide after his layoff, drawing Busquets to the left, while Viktor Claesson’s aggressive diagonal movement provides a layoff option underneath the recipient. Isak’s elusive skill in combination play does the rest to break the Spanish counterpress.

Wary of the pitfalls of playing for a draw, Enrique candidly stated his intentions before the game that he wished to see his men push for all three points. As one would expect, the Spanish were dominant in their control of the ball, probing the Swedish block from a 4-3-3 structure. Though the side’s patterns of play are well known, Enrique has shown himself capable of making tweaks from game to game. In this case, a similar distribution of roles in the middle of the park to the reverse fixture emerged.

Gavi often dropped back in the left halfspace to demand passes from the central defenders. Jordi Alba moved ahead of him on the flank while Olmo roamed into pockets of space between the lines to pry open Sweden’s block with his technical ability in tight rooms. On the right side of the pitch, however, the dynamics between the triangle of red shirts differed. Soler stayed between the lines, while César Azpilicueta was deeper, and Pablo Sarabia held the width to their outside. 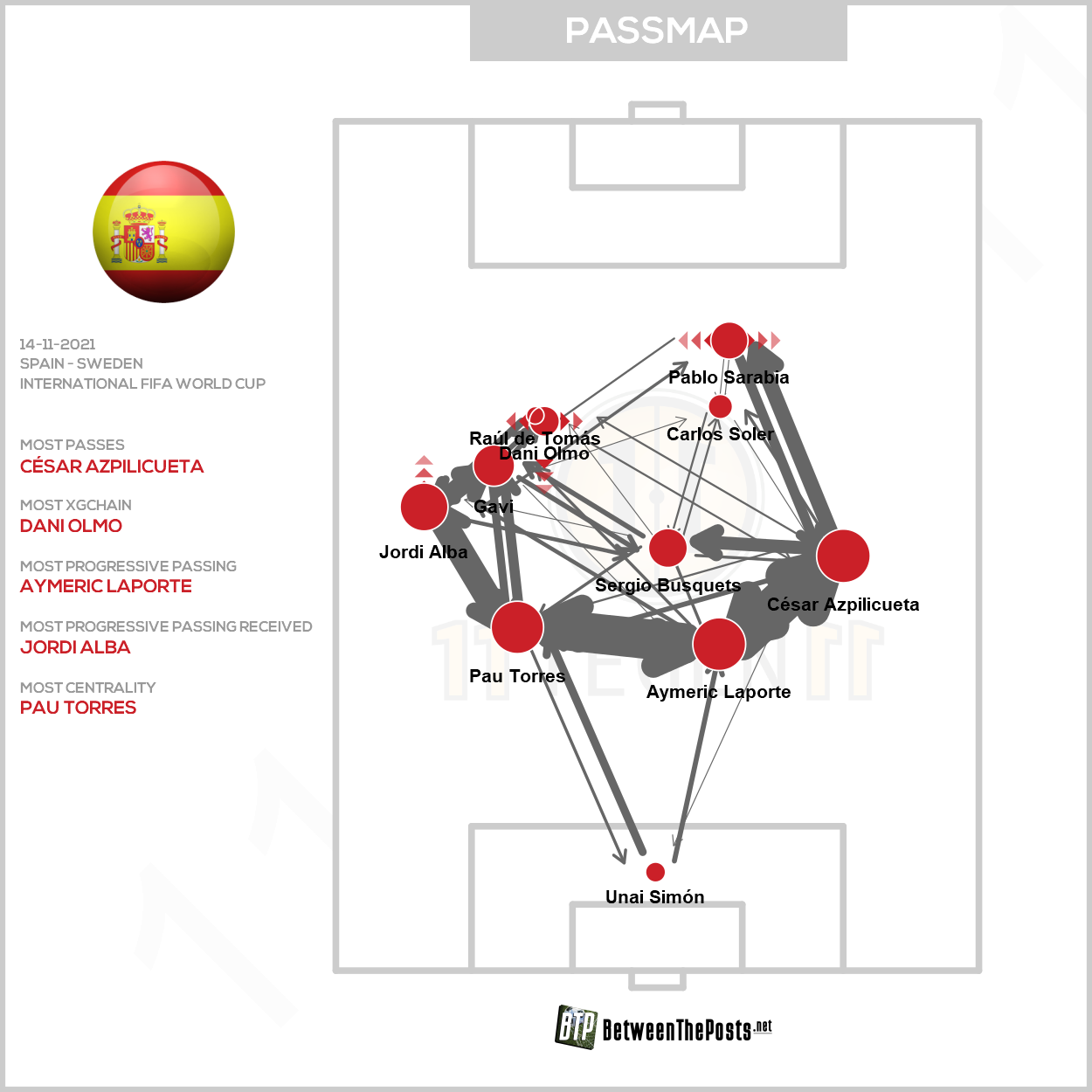 Unfortunately for the Spaniards, the eventual outcome was an all too familiar one. Hoarding 71% of the possession before half time, they generated a mere three shots, none of which were on target. Even by their standards, the performance featured paltry outfit in front of goal, prompting Enrique to adjust.

The same eleven red shirts came out to play at the start of the second half. However, Olmo had moved over to the right flank, and Sarabia took his place on the left. Therefore, both wide men played on their natural side. This switch set the tone for a shift in focus in the final third, where the Spanish focused much more on driving crosses into the box.

These deliveries mainly came from the left flank, feeding Soler, de Tomás, and Olmo on the right. Thus, Gavi’s role had changed a little too. He asked for the ball much less from Pau Torres, mainly staying higher between the lines. From here, his underlapping runs through the channel to the outside of Lindelöf drew cover inward to create more room for the two wide men to find options in the box.

A more goal-oriented approach racked up the shot count, but Spain were yet to go ahead. So on the hour mark, Enrique turned to his reinforcements, making the first two substitutions of the contest. Álvaro Morata replaced de Tomás as the striker while Rodrigo Moreno swapped places with Sarabia. The latter’s introduction saw the return of inverted wingers as Olmo shifted back over to the left flank.

64th minute: combination play from Spain. Morata continually made (double) movements to target the space behind the back four in the left halfspace after his introduction. Here it forms part of a recurring combinative pattern of play where Gavi drops deep, Olmo loads Olsson 2-on-1 then looks for the halfspace switch to Soler as the striker runs laterally to occupy the two central defenders. The timing of the rotation from Olmo deserves mention here but his through ball slips under Soler’s foot.

Sweden still fancied their chances of taking all three points, probing at vulnerabilities in the hosts’ back four. Ibrahimović made a twenty minute cameo, leading a frontline that became more eager to press from the front in a higher 4-4-2 block. But while Enrique’s men came under the cosh, the Swedes pressed them at their peril.

And in the 86th minute, they had chanced their luck one time too many. Spain worked the play down the left flank through Alba, who clipped the ball to Gavi. Olmo then drove inward hammering a long range effort at goal. Robin Olsen pulled off an acrobatic save to divert the strike onto the crossbar, but Morata followed up, lifting the ball over the helpless goalkeeper to send Seville into ruptures.

Morata became a meme because of the high-profile misses, but the reality is that Spain lacks so much bite in the offense that they cannot afford to play without him. His fast movements have been vital for Spain to improve during the 2nd half. #SPASWE

Enrique’s men delivered a predictable display, but the result is all that matters. Before the 2022 World Cup, the next step for Spain may be to evolve their approach in the final third, where their playbook can quickly run aground. But the various reconfigurations of their attack in this clash highlighted the decisive role of Morata, and it is fitting that, for all his detractors, he pushed his side over the line.

If Spain were to come out on top in this match, a laborious win was almost inevitable. Sweden force sides to earn their victory, while the firepower in the outfit carries a powerful punch on the break. So while this loss is disappointing, Andersson’s men should be feared ahead of the playoffs next year. 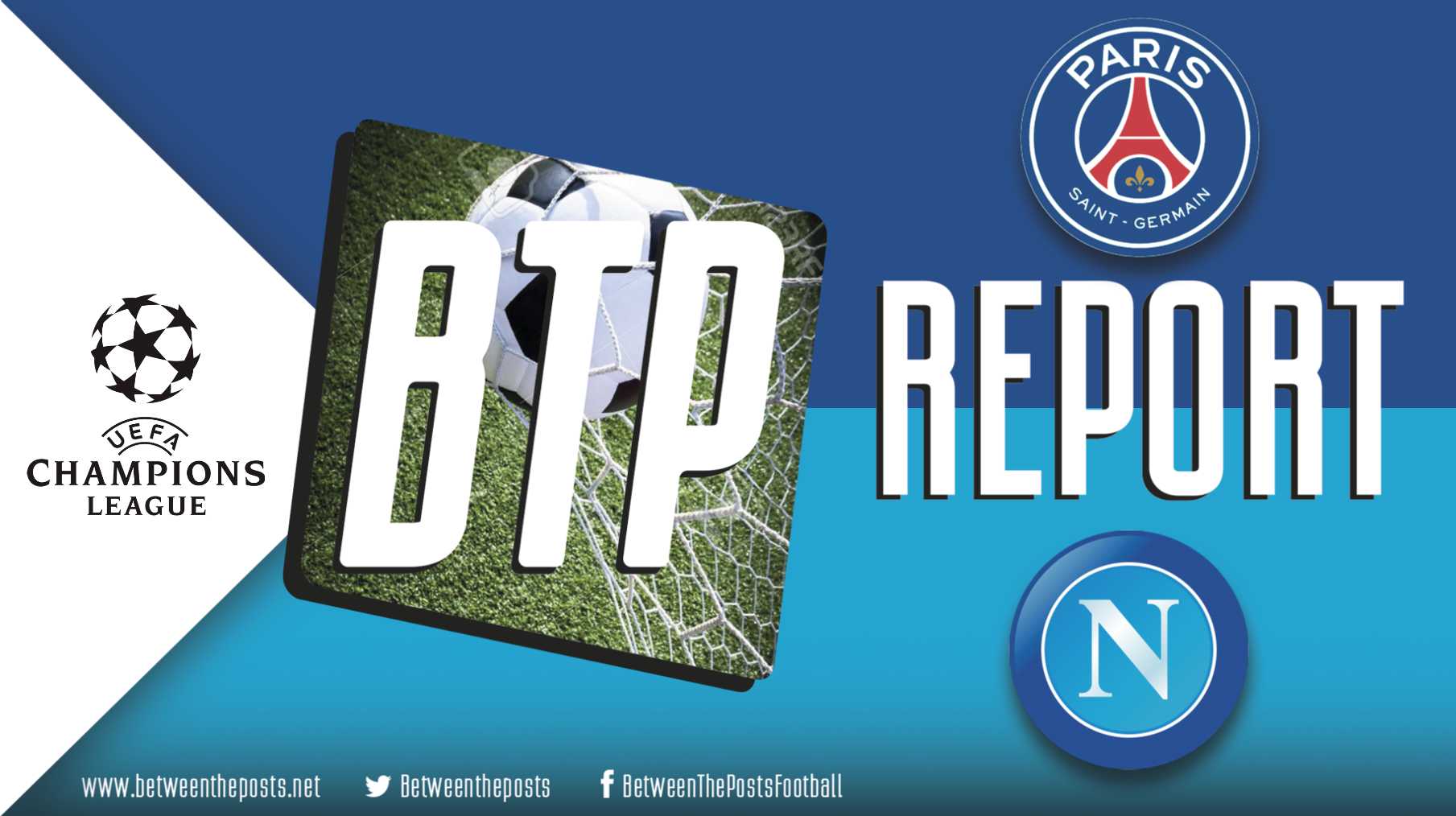 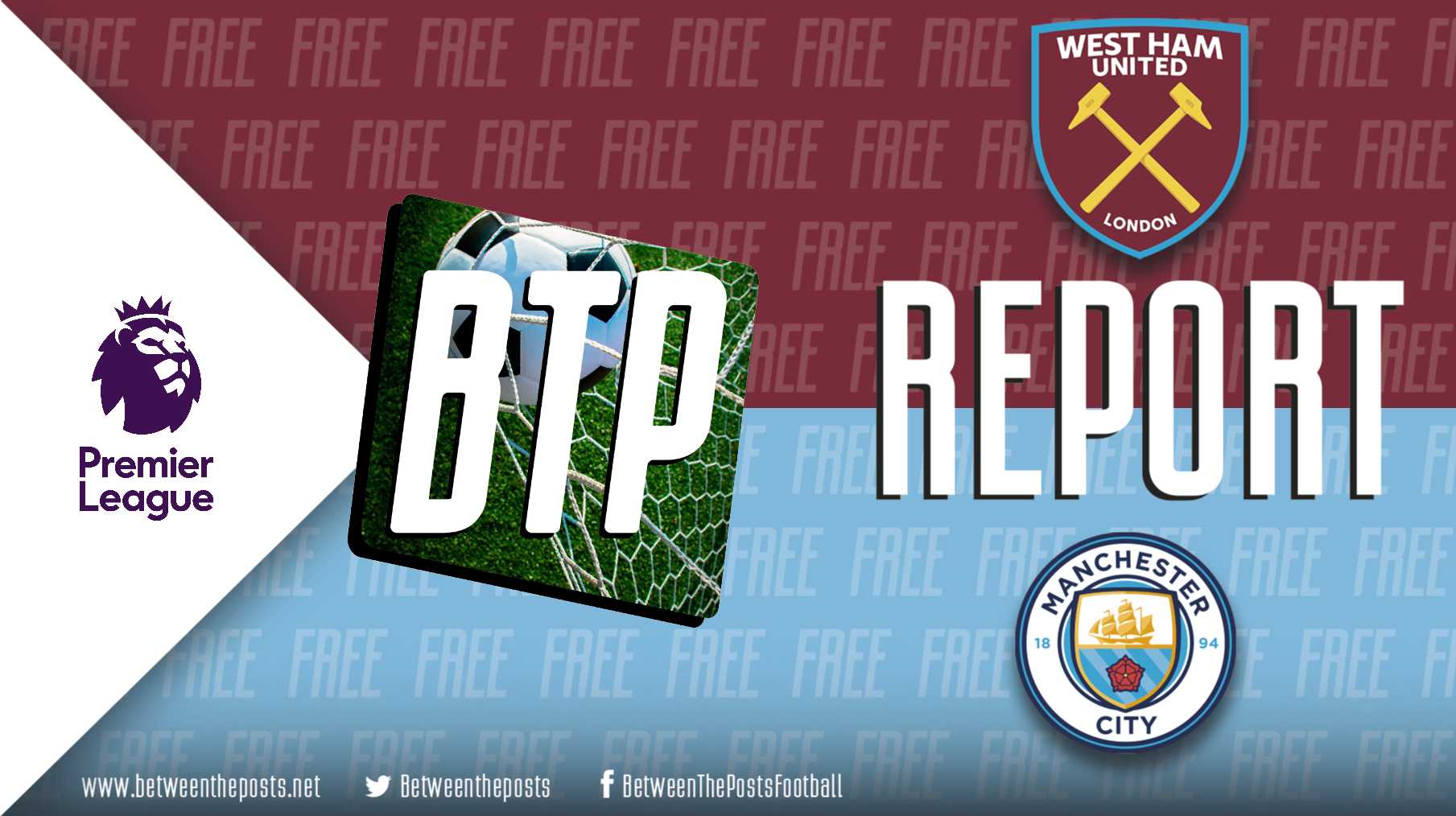