Lazio’s Champions League hopes were blown to smithereens by a free-flowing, fast and clinical Atalanta team. Having had their press beaten throughout the early stages of the match, Atalanta tweaked their shape off the ball to create turnovers high up the pitch and overloaded the flanks, which created some excellent chances.

The race for European places in Serie A has featured a lot over the past weeks on Between the Posts, with just seven points separating six teams at the top of the table. Atalanta are right in the driving seat for a top four finish, having recorded the most goals and expected goals in the entire league going into this match day. Getting points at the Stadio Olimpico would be another huge step in the right direction.

As for Lazio, inconsistent form and poor finishing of chances create meant that victory was a must if they are to compete in the Champions League. Simone Inzaghi made three changes to his 3-5-2 system following their 2-1 victory away to Sampdoria, the first being Adam Marušić replacing the veteran midfielder, Senad Lulić, due to suspension. Luis Alberto returned to the squad to add more creativity in midfield, whilst top scorer Ciro Immobile started upfront next to Felipe Caicedo.

Atalanta’s run of form has seen them go into this game unbeaten since February and scoring 37 goals away from home throughout the campaign. Gian Piero Gasperini made a subtle rotation in his system, going from a 3-4-2-1 formation to a 3-4-1-2 shape, enabling the number ten to drop into the midfield line when out of possession. Berat Djimsiti started in the back three, whilst Timothy Castagne was preferred as the left wing-back over Robin Gosens. Gasperini’s final change would see Josip Iličić start upfront, replacing Mario Pašalić. 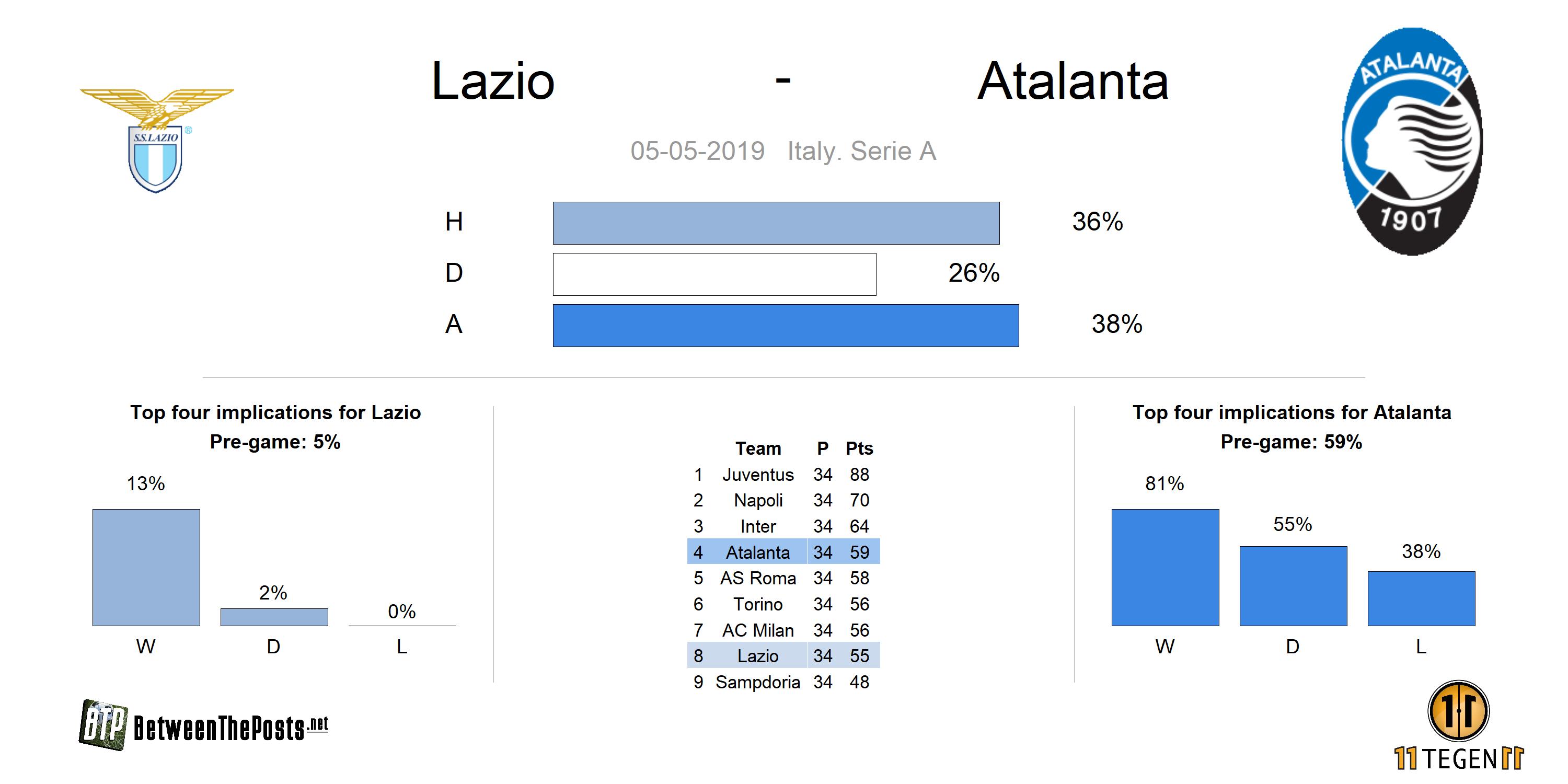 With the stakes raised, the game kicked off with both teams strong in building up attacking transitions but vulnerable in defense. Lazio were in control, comfortable in possession and were gifted acres of space in-between the lines. They scored early, a cross going high up into the air was beautifully controlled by Felipe Caicedo, giving Marco Parolo the perfect amount of room to curl in the opener after just two minutes.

Atalanta pressed high up on all three defenders whilst man-marking the rest of the Lazio team, however with Remo Freuler stepping out of the midfield line to press Wallace – and often out of position to do so – this gave the defender and easy passing option to cut the ball back inside to feed the strikers or out to Romulo on the right flank. 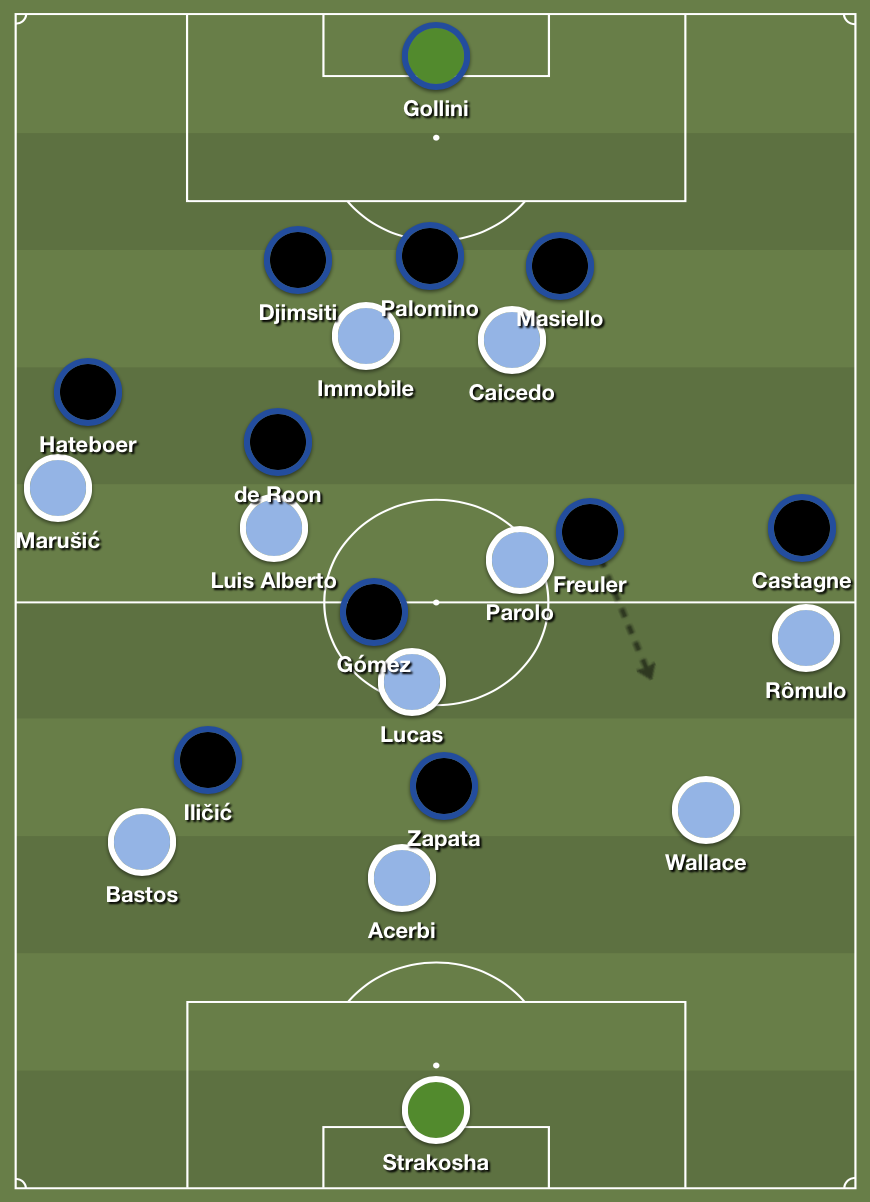 Atalanta’s man-marking system, but with Freuler stepping out, Wallace can progress the ball forward.

While the front three pressed, the defensive line would sit back and invite pressure, which was an incredibly risky tactic, but this did stop Lazio from entering the penalty area; especially when Hans Hateboer and Timothy Castagne dropped back to join the defense. However, Lazio did make progress far too easy and had plenty of room outside of the penalty area. If they had a final ball, they would have created far better chances than they did in the first fifteen minutes.

The game sways in Atalanta’s favour

After Lazio’s great start to the match, Atalanta would begin to get a foot back into the game thanks to some good passing sequences in the final third. The one-third of the pitch that is closest to the opposition’s goal. Lazio moved into a 5-3-2 medium block A medium block refers to a team that retreats in their own half out of possession, generally only disrupting their opponents some way into their own half. off the ball, drifting between both flanks before pressing onto the wide channels and utilizing the sideline. Both Bastos and Wallace man-marked Josip Iličić and Duván Zapata when Atalanta had possession, whilst Francesco Acerbi was used to sweep, a modern use of Catenaccio which is seen a lot in Serie A. 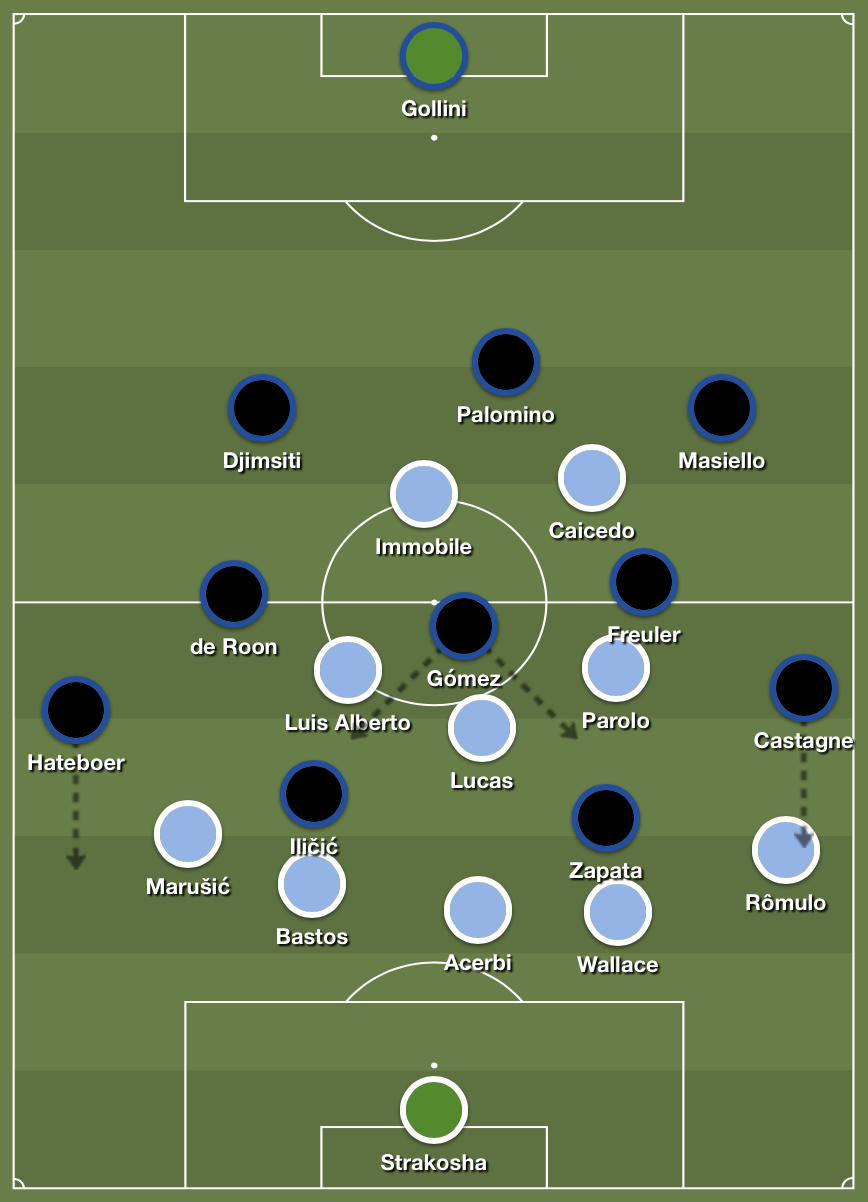 To counter this, Atalanta overloaded on the flanks and Alejandro Gómez’s role in the buildup was pivotal in making progress and creating chances. Gómez roamed between both channels, as well as dropping deep when needed. Doing this gave him both the time and space to pick his passes and make runs from deep – he was a constant danger. Lazio’s setup struggled to stop Atalanta from building passing moves from the middle third, easily getting into passing triangles and linking with both strikers upfront.

Lazio’s aggressive wide press failed against Atalanta’s overloads and the visitors built some great opportunities – more notably from the left channel. Zapata’s equalizer was well deserved, Freuler’s attempt falling straight to him, whose touch was as good as his finish.

From there, Gasperini’s team started to break into their free-flowing football, especially on counterattacks from deep. Lazio were kept in the match but conceded a number of fouls, which would break Atalanta’s play. They were also disciplined in having the number of players back to crowd the opposition out when the attack slowed down.

Lazio fall apart in the second half

Atalanta were far more balanced in their pressing after the break. Still in the same structure, Freuler was not bursting out of the midfield line like we saw in the first half, either Gómez or Zapata pressing on Wallace instead. They also kept more men behind the ball when Lazio entered their half, enabling more passing lanes to be covered and more turnovers in better positions.

Lazio’s ball retention was not helped by committing more players forward in the buildup. This led to Atalanta’s frontline isolating the defenders, Wallace and Bastos made risky passes and poor decisions when either of them had possession. The second goal was a great example of this, Gómez rapidly closing Wallace down forced him to make a disastrous error and created a one-versus-one situation against Thomas Strakosha. Gómez kept his composure, squared the ball back into the area before Timothy Castagne gave Atalanta the lead.

Although they kept a fair amount of possession, Inzaghi’s team lost their structure and did not have any player in the final third who could link and create opportunities. Gasperini’s men defended with ease, having the numbers back to crowd opposition attackers out of the game, as well as plenty of space in the middle third If you divide the pitch in three horizontal zones, the middle third is the most central area. to retain the ball. Atalanta finished off the match from a set-piece, a bullet header into the far corner that initially looked to have been headed in by Berat Djimsiti, but was later overturned to a Wallace own goal. 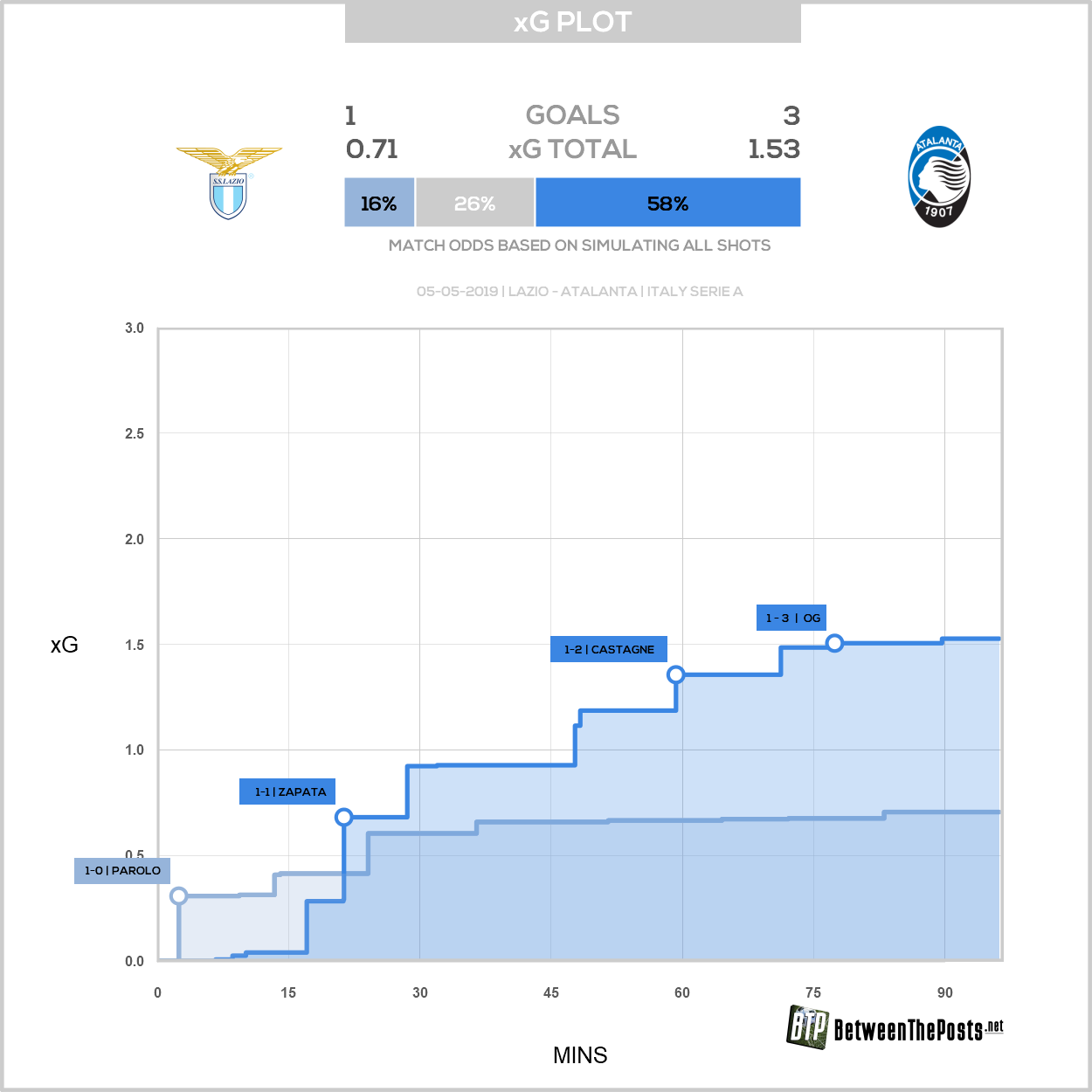 Lazio could not have crumbled out of the race for the Champions League spots in a worse way. A good twenty minutes of football was followed by a poor thirty and a dreadful forty, evaporating from the match the further it went. With three matches left, Simone Inzaghi needs to regain momentum if they want to play in any sort of European competition next season, and if they want to stand a chance in the upcoming Coppa Italia final, contested between these same two teams.

For Atalanta, they further proved that their position in the Serie A table is not luck-driven, it is fully deserved. Travelling back from Naples and Rome with six points is no mean feat and it underlines the excellent season Atalanta is having. On top of the result, Atalanta were thoroughly entertaining to watch yet again, getting the upper hand with some brilliant passing moves and well-calculated pressing. A fitting rehearsal for the Coppa Italia final. 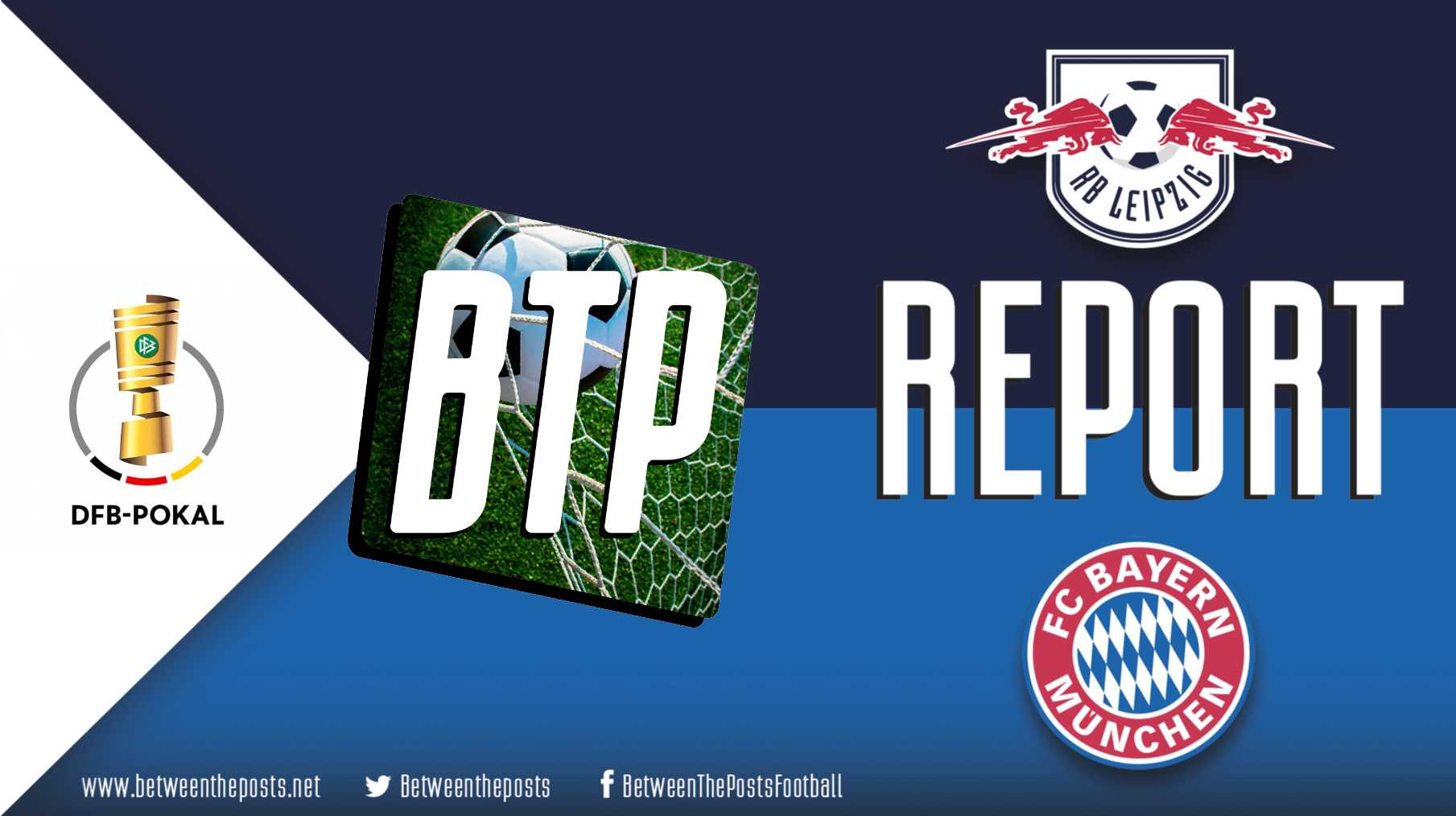 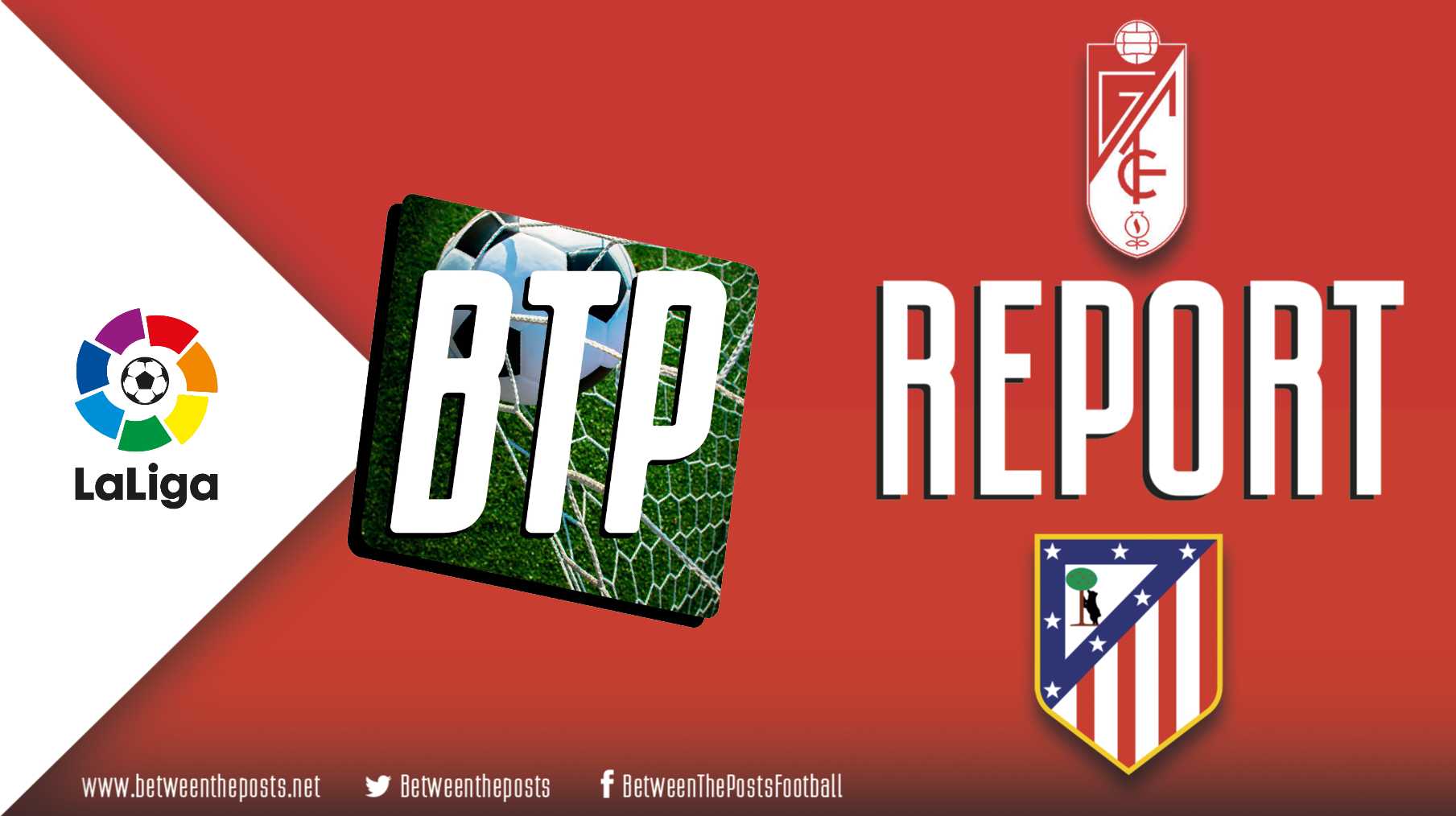