PSG’s 3-4-2-1 formation was super dominant in the opening half hour of the Coupe de France final, constantly finding openings against Rennes’ 4-4-2 shape. It led to two goals, after which it looked extremely unlikely this game would be decided by a penalty shootout. The fact Rennes fought themselves back into the affair was both due to Julien Stéphan’s tactical changes and PSG’s own shortcomings.

Despite winning their sixth league title in seven seasons, Thomas Tuchel’s first season at Paris Saint-Germain has fallen short of the ridiculously large expectations the capital club has placed upon themselves. Due to these expectations, the Champions League round of sixteen exit against Manchester United was a major blow for the club’s hierarchy, players and technical staff.

Winning the domestic league title and the Coupe de France are the bare minimum the German manager was expected to deliver this season, however, it still gave Tuchel a chance to end the season on a good note. Rennes came into this cup final essentially in a no-lose scenario: they are in no danger of relegation in Ligue 1 (allowing them to focus on this game fully), and were not expected to upset the odds at the Stade de France.

PSG had been without Neymar and Cavani in the business end of the season. Last week against Monaco, both players returned. For this match, Neymar found himself in the starting lineup, while Cavani was still benched.

Captain Thiago Silva and young utility player Thilo Kehrer were not available however, as well as Thomas Meunier. Predicting the shape of Tuchel’s formations this season has been somewhat of a fool-hardy exercise, but it turned out to be a 3-4-2-1 formation. Due to the previously mentioned selection issues, German attacking midfielder Julian Draxler was forced to play in a somewhat unfamiliar role in the center of midfield, something he has been doing often this season. Similarly, Colin Dagba (traditionally operating as a right back), played on the right side of a three-man defensive line.

Julien Stéphan and Rennes had a clean bill of health in regards to player selection and a number of players capable of causing PSG’s defense significant worry. The only real player not subjected to strict tactical guidelines in Rennes 4-4-2, Hatem Ben Arfa, has been given license to roam and dribble at will when in possession of the ball this season. In the other attacking positions, wingers Ismaïla Sarr and Benjamin Bourigeaud were extremely aggressive to exploit the space on the counter, something they would need to do a lot of in this match.

From the very start, the formations of both sides were evident. PSG resembled a 3-4-2-1 shape in possession, enabling the wing-backs (Juan Bernat and Dani Alves) the ability to push high up the pitch and create numerical overloads When one team has more players in a certain area or zone than the other team. in wide positions. It also gave them increased defensive solidarity against Rennes 4-4-2 formation: the three center-backs they employed meant that they were always a man-up whenever Rennes looked to counterattack through M’Baye Niang and particularly the free-roaming Hatem Ben Arfa. 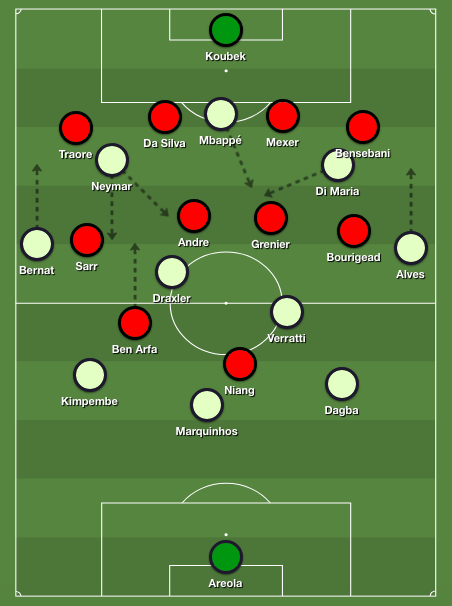 The opening ten minutes of the match followed a lot of PSG possession, and Rennes looking to win the ball back on their own half and transition quickly from there. The fluidity of Paris Saint-Germain’s attacking trident caused tons of problems for the Rennes rearguard. Kylian Mbappé, Neymar and Ángel Di María took turns coming short to receive in pockets of space on the half-turn and look to slip in passes beyond for their teammates. Mexer and Damien Da Silva were left with difficult decisions: follow the attacker into space and leave gaps in defense, or let them run free and create danger unchallenged.

The idea of a zonal 4-4-2 formation is also to block passes into players that position themselves between the lines, like Mbappé, Neymar and Di María did. In the first thirty minutes, Rennes did not accomplish that at all, and it was the foundation for PSG’s dominance.

However, the opening goal of the match came from a corner kick scenario as opposed to any individual brilliance in open play from the French champions. The opener from Dani Alves was brilliant nonetheless. Neymar picked out his compatriot with a laser pass, and the wing-back thrashed an unstoppable volley into the back of Tomáš Koubek’s net.

The wingers of Rennes, Ismaïla Sarr and Benjamin Bourigeaud, often were extremely aggressive in getting forward when the ball was won. If attacks broke down, PSG had tons of space to exploit on the flanks or in front of the back four in which they were able to go the other way. Combined with the fact that PSG often had an extra central defender (usually Marquinhos) with the ability to step into midfield, Rennes were overloaded in almost all areas of the pitch.

In short, Rennes’ ambition with the ball proved their own worst enemy. Furthermore, in the brief periods wherein Rennes were able to string together meaningful possession moves, the pressing football Tuchel has brought to PSG this year was fully on show: Stéphan’s men were often forced to lose possession cheaply in their own half, or hit hopeful balls into the channels for Niang and Ben Arfa to chase.

Just when luck seemed to have abandoned Rennes, they were given a lifeline in the form of a Presnel Kimpembe own goal. Hamari Traoré, advancing the ball into PSG’s final third, The one-third of the pitch that is closest to the opposition’s goal.  faked to cross and bought himself time to center the ball in the six-yard box. Kimpembe sliced the resulting cross past his own goalkeeper, and despite being thoroughly dominated throughout the opening forty-five minutes, Rennes had something to build on in the second stanza of the match. 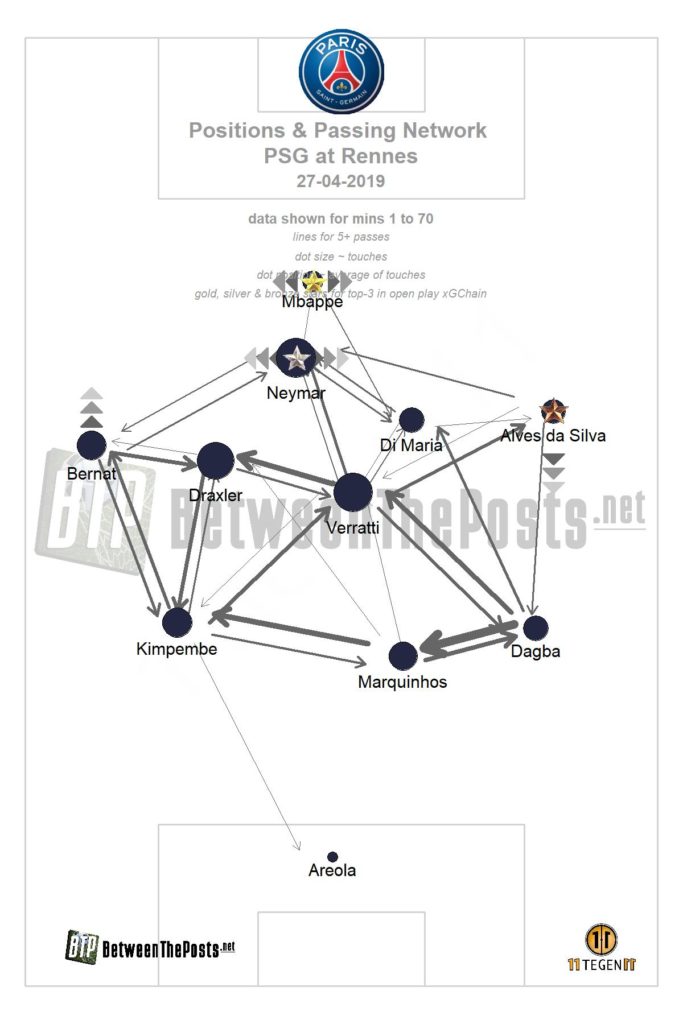 Rennes Make Slight Changes And Earn Themselves A Way Back

While no changes in regards to personnel occurred during the break, Rennes clearly changed their defensive approach in regards to intensity in the press. During the first half, Stéphan’s men operated in a medium block. A medium block refers to a team that retreats in their own half out of possession, generally only disrupting their opponents some way into their own half. Only starting to truly attempt and disrupt PSG players when they got into their half. However, this changed to more intense pressure, notably in the wider positions, when Bernat and Alves got possession out wide. Rennes noted that pressing the man in possession in this area of the pitch was much more effective, as it gave their players better ability to tighten space (also considering the space in wider positions is halved anyways.)

This change caused a number of issues for PSG, but one of the biggest alterations it gave the Parisiens was that it severely limited passes into the likes of Neymar, Mbappé and Di María were able to work with. To make matters worse, Ben Arfa was increasingly getting involved with linking play, after a quite anonymous first half.

The changes that manager Stéphan made began to increasingly force PSG into more uncomfortable scenarios and thanks to a well-earned corner, it was center-back Mexer who slipped in at the near-post to head home. Considering how much the tide of the match was against them after forty-five minutes, it was somewhat remarkable that Rennes were level in the 70th minute.

For the remainder of the match, Stéphan realized that continuing to leave his team so open, combined with heavy legs, would likely prove to be the wrong decision. Instead, Rennes pulsed with moments of pressure seconds after losing possession, but when it was clear they could not regain the ball immediately they would get into a remarkably compact shape and defend. This strategy worked brilliantly, and PSG got more and more frustrated at their inability to break through centrally as they had done with ease previously. As a result of better central occupation, PSG sought out the flanks. Crosses and cutbacks were cleared time and time again by Rennes however, and the match would go to extra-time. 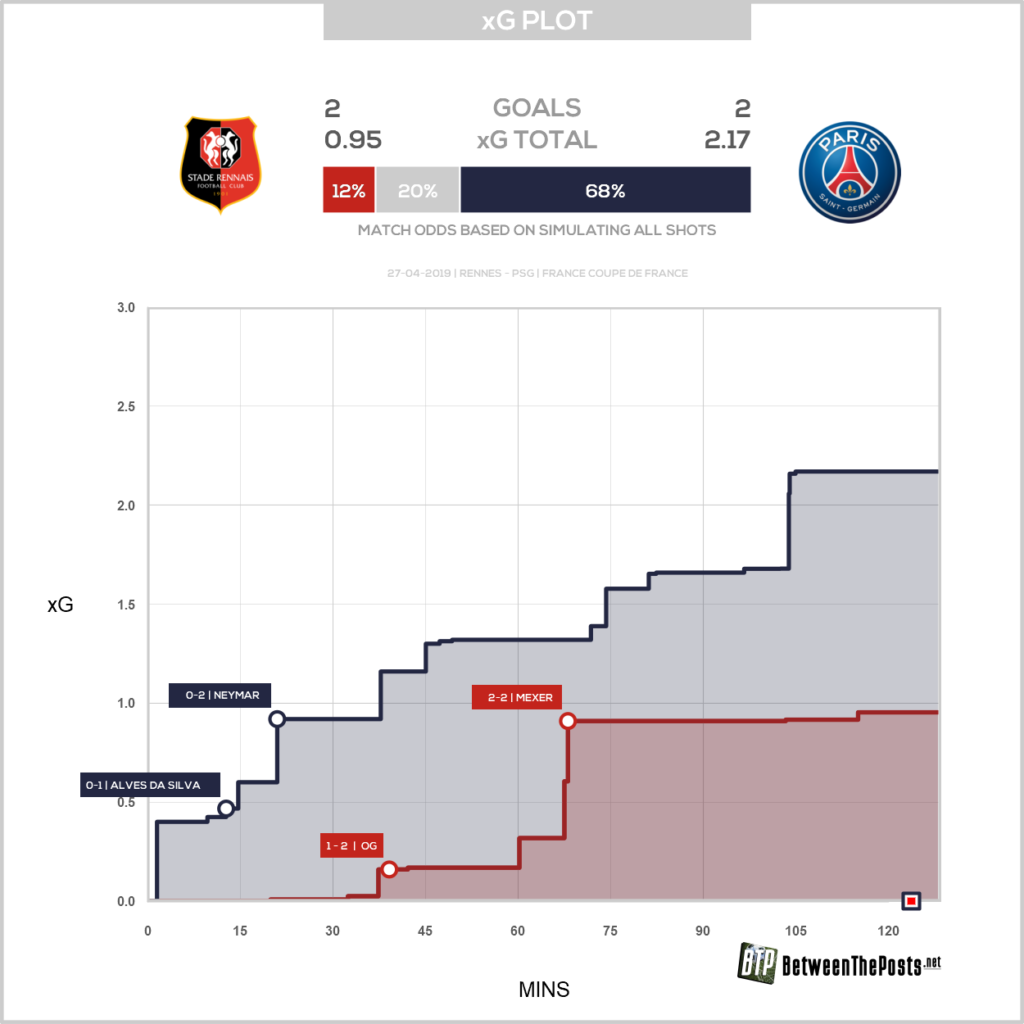 As if often the case with matches that go to extra-time, both sides showed all the hallmarks of tiredness. PSG remained the aggressors in an attacking sense, but the final pass or shot went begging so often for both clubs. The game did have some moments of transitions but PSG and Rennes were unable to find the back of the net on both, leaving just one remarkable moment to describe before delving into the penalty shootout. With just two minutes left to play, Mbappé lashed out studs first at Da Silva’s knee. Direct red card, and rightfully so.

Without goals in extra time, the fate of PSG and Rennes would be decided by penalty kicks, and unfortunately for young Christopher Nkunku, his skied penalty would prove to be fatal for Paris Saint-Germain. Rennes had claimed the Coupe de France.

Few would have expected this match to go all the way to penalties, but massive credit has to go to both sides (particularly Rennes) for putting together such a great spectacle at the Stade de France. PSG have made a habit of cannibalizing the rest of French football in terms of competitiveness but Rennes overcame the odds to the joy of their supporters in Brittany.

After failing to overcome Manchester United in the Champions League, and now falling to a side so unfancied on Saturday, the scrutiny surrounding Tuchel’s position will be intensified. The first half of the match saw his team play the kind of football we expect them to, however, after Rennes gained a foothold in the match the lack of any real response was galling. For a manager so acclaimed at his ability to put together complex tactical innovations on the fly and adapt to his conditions, this was certainly not Tuchel’s best moment. Winning the domestic cups and the league is the bare minimum a Paris Saint-Germain manager is expected to do; having failed to do so could prove fatal for his job status, even though it is hard to gauge PSG’s board.

For Rennes, there response to going two goals down and ability to make slight changes in regards to their approach (pressing more, and staying more compact when needed), undoubtedly gave them the platform to stand strong and win their third Coupe de France title. Considering their strong performances in the Europa League this campaign, manager Julien Stéphan has earned himself all the acclaim coming his way at the moment. Should they prove able to keep ahold of their star players and add to the squad, Rennes could possibly improve on their season even more next year.