In a game wherein Betis had seventy-five percent ball possession, Rennes took an early lead, largely thanks to maestro Hatem Ben Arfa. The balance shifted towards Betis however, in no small part due to the Rennes’ own tactical mistakes. The second half was a true besiegement of Rennes’ goal, and when the dust had settled, both teams had scored three goals.

The Europa League has been the podium for some genuinely captivating knockout ties throughout the years. The fact that thirty-two teams make it to the knockouts, means a whopping total of sixteen ties are be played. Chances are at least some of these will offer a good show, right?

Manager Julien Stéphan took over from Sabri Lamouchi in early December. One could call his system a 4-2-3-1 formation as it features a number ten in Hatem Ben Arfa, two genuine wingers in Ismaïla Sarr and M’Baye Niang, two holding midfielders in Clément Grenier and Benjamin André, four defenders and a striker. In this match however, Rennes were defending more often than not, so we could also call them a 4-4-2 team. Without the ball, the wingers drop into midfield and Ben Arfa plays alongside striker Adrien Hunou, as the shape becomes a traditional 4-4-2.

As of this season, Betis manager Quique Setién has switched from a formation with two central defenders to three. This means Betis play in a 3-4-2-1 formation, with Joaquín at right back, William Carvalho and Andrés Guardado in a double pivot. 4-2-3-1 is one of the most frequently occurring formations in football. The two most defensive midfielders are called a ‘double pivot’. For this match, Sergio Canales and Giovani Lo Celso played as the numbers ten shortly behind striker Loren Morón. 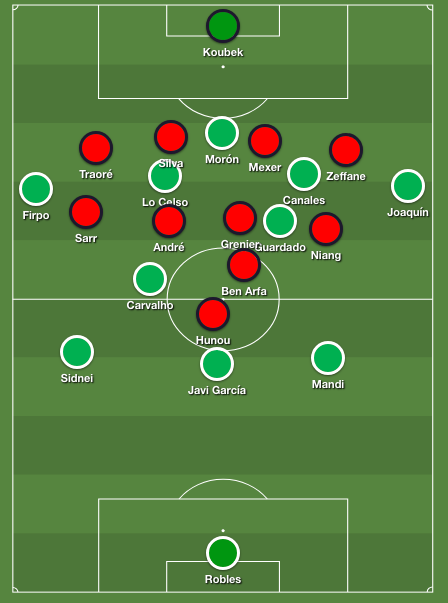 Both team’s general positioning, depicted in a situation where Betis had the ball.

Hatem Ben Arfa is still a great football player. When he has the ball at his feet that is. As noted before, you can interpret his role in this match as a counterattacking striker in a 4-4-2 system. In general, Ben Arfa has the freedom to go wherever he wants. The first big chance of the match originated from his tactical freedom combined with great individual skill and creativity.

In the second minute, Ben Arfa picked the ball up on the right side of the field, beat two players with a dribble and shifted the ball over to Rennes’ left back Mehdi Zeffane. The Algerian defender – right-footed by nature – whipped in a wonderful cross with his left foot, which striker Hunou only had to tap in. 1-0 Rennes, and we had ourselves a game!

Eight minutes later, Rennes’ right winger Ismaïla Sarr used his great technique to surpass two Betis players, starting from more or less the same position as Ben Arfa had done. He could only be halted with a foul, which meant a free kick from a tasty position for Ben Arfa. The small playmaker curled the ball just underneath the bar with so much power that Betis’ goalkeeper Joel Robles was forced to give away a corner kick.

What followed was one of the most curious goals of this year’s Europa League. The deflected corner kick was put back into the box by Sarr, and deflected off Betis defender Javi García, through the legs off Niang, who was in an offside position, but did not touch the ball. After consulting the assistant referee, the goal was given and Rennes were two goals up, after ten minutes.

Tactical indiscipline gets Betis back into the match

Barring the first five minutes, this match was played on Rennes’ half. Betis had the ball and with the two-goal lead in hand, Rennes did little in trying to win it back early. Still, for the first twenty-five minutes or so, Rennes were very dominant without having the ball.

They set up shop in a very compact 4-4-2 shape and very much limited the space for Betis to play in, as Setién’s side mostly circulated the ball around their own back-line. The very first time Betis found an open player between the lines was in the nineteenth minute, as Lo Celso got the ball on the half-turn and immediately attempted a through ball.

Rennes more or less helped Betis back into the match themselves. Sarr and Niang, the wingers, were often too late to track back or to tuck inside to limit the space. Why Sarr and Niang did a fine job in the first twenty-five minutes but overlooked their defensive duties from then on is a good question for Rennes’ manager Julien Stéphan to answer this week. A number of turnovers in Rennes’ half were left unexploited by Betis, until the 32nd minute.

Hatem Ben Arfa – hugely important in the first two goals of the game –  played an important role in the third goal of the night too, as he attempted a dribble on his own half, which was halted by Betis. Two passes later, Lo Celso found himself one-versus-one with Rennes’ goalkeeper Tomas Koubek. Although Lo Celso tripped over on his finish, the ball found the back of the net, and Betis got a goal back.

A very rare counterattack by Rennes completed this very chaotic half of play. Guardado attempted to halt right back Hamari Traoré’s run inside the penalty area. Truly a fifty-fifty call, but a penalty was given, which was – naturally – converted by Ben Arfa, who thus was involved with all four goals in this half, as Rennes went into the break with a very comfortable 3-1 lead.

So much offensive power is bound to pay off

About ten minutes before the opening goal, Betis’ left back Firpo – who has been very unlucky with injuries so far – had to be taken off with a stretcher. His substitute was young Mexican attacker Diego Lainez. This meant Guardado became the left wing-back, Canales moved alongside Carvalho and Lainez played as an inside right winger.

In the first half already, Guardado had positioned himself higher up the pitch than Carvalho. Canales did this even more extreme, which meant in the second half, Betis’ shape resembled something of a 3-1-5-1 more than the 3-4-2-1 it was on paper. 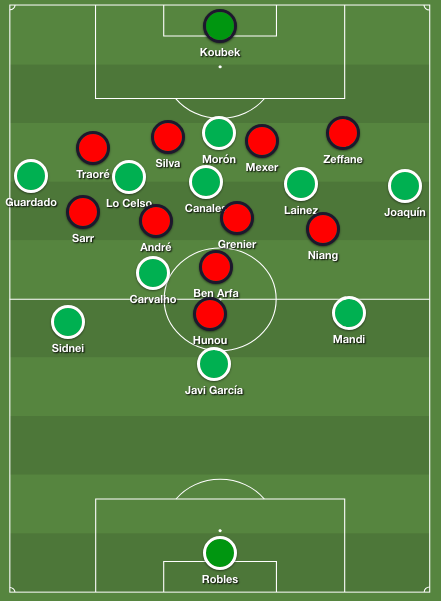 Making sure all five channels behind the striker were covered with an offensively talented player was very beneficial for Betis’ offensive play. More often than not, one of those three interiores could receive the ball in space and distribute the play from there. Typical for Betis however, was that the final ball was inadequate, which has been a problem all season long. 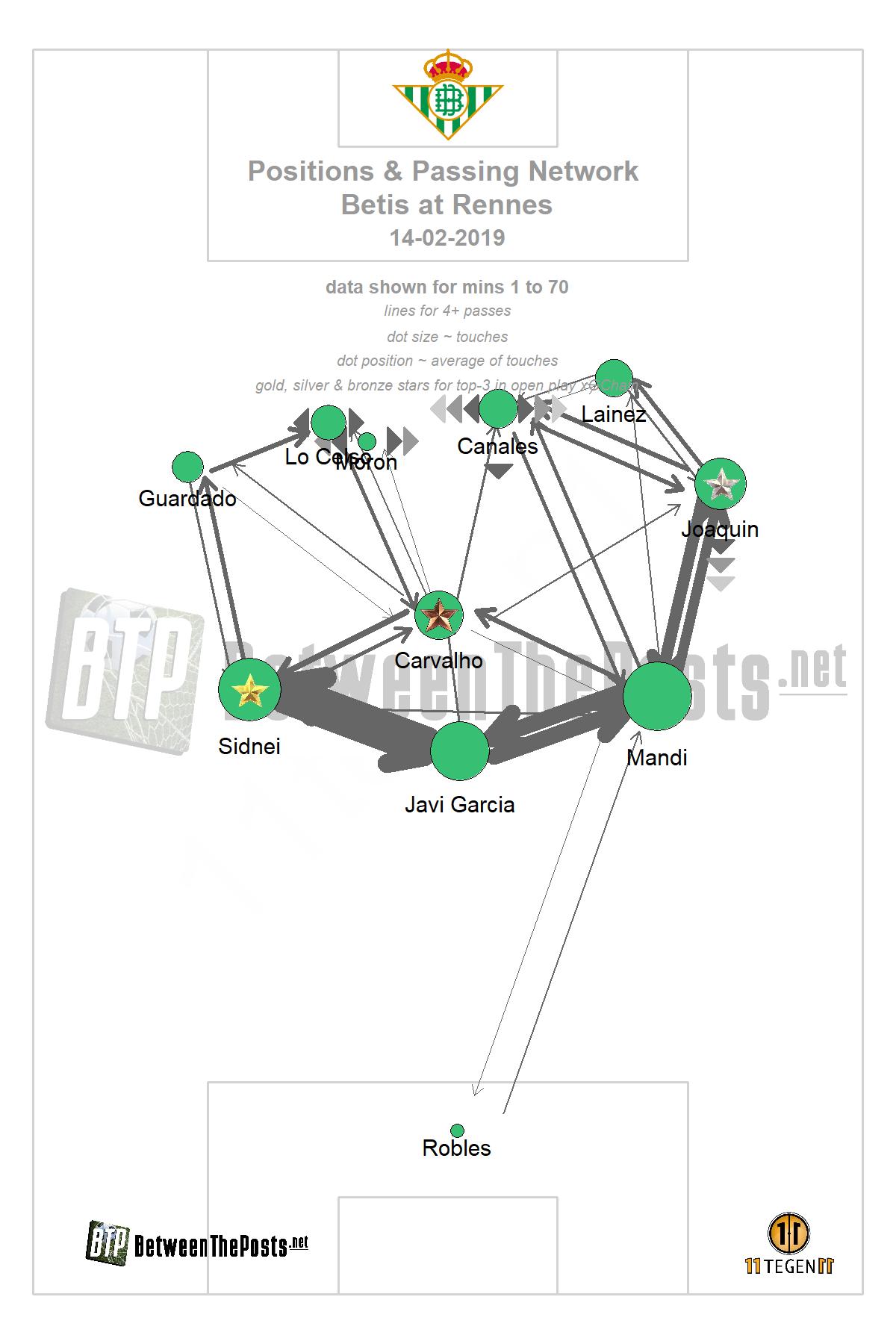 Betis did score however, as Lainez – who made an excellent cameo – was tripped over for a free-kick. A strong delivery by Joaquín on the head of Sidnei meant 3-2 with over thirty minutes to play.

Switch to 5-4-1 formation fails to save Rennes

When the main problem is that the opponent is receiving the ball between a team’s midfield and defense time and time again, there are a couple of possible solutions. Hatem Ben Arfa and fellow striker Adrien Hunou were outnumbered four-against-two and could do little against Betis’ buildup. Perhaps Stéphan could have opted to instill a 4-1-4-1 formation, as an extra holding midfielder allows for better pressure on the opponents between the lines. 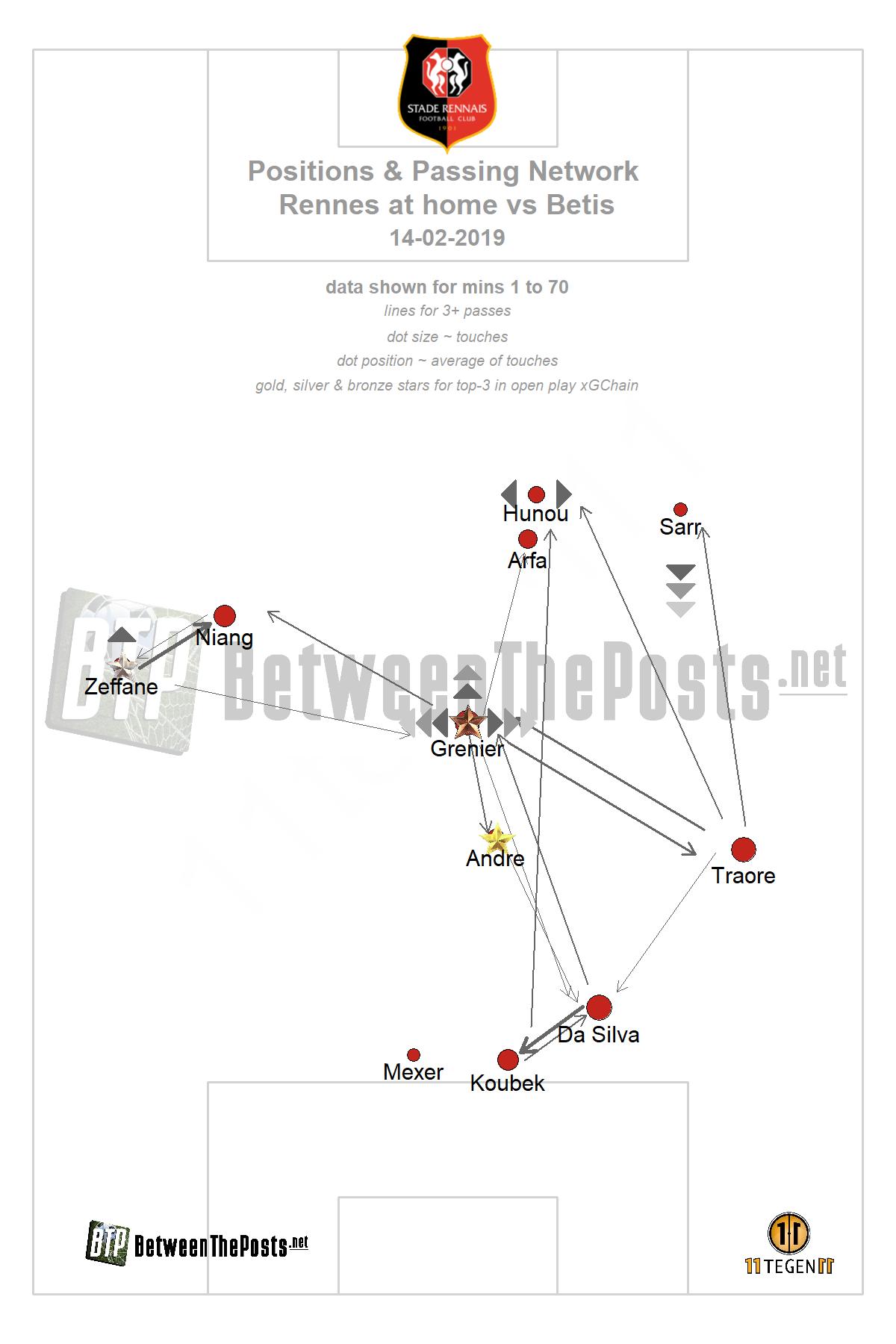 Stéphan’s solution was a bit more conservative. He opted to bring on an extra central defender in the form of Ramy Bensebaini, who was fielded as a substitute for Hunou. This meant Rennes were now defending in a 5-4-1 formation, with Ben Arfa up top and nine outfield players in his back playing in two very compact lines.

Since then, Betis slightly adjusted to put more emphasis on flank play, as the space in the middle was even more congested than before. Every time Rennes managed to win the ball back in this final part of the match, they lost it to Betis. Ben Arfa, on his own, could not hold the ball up effectively.

The massive amount of pressure was not converted into a lot of chances however, and Stéphan’s bet to let Betis play in the final third, The one-third of the pitch that is closest to the opposition’s goal. but congest the penalty area with nine defenders seemed to work. Until the last minute, and Betis got another corner-kick. It fell for the feet of Lainez, who did not hesitate, and fired away at Rennes’ goal. The ball took two deflections and ended up in the back of the net, as the eighteen-year-old Lainez scored his first goal for Betis, and this very enjoyable tie ended in a draw.

This match was an interesting battle between two distinct styles of play.

The contrast in statistics pretty much tells you everything you need to know about it. Six shots for Rennes, fifteen for Betis. Twenty-five percent possession for Rennes against seventy-five for Betis. Rennes had a pass success rate in the lower seventy percent, while Betis ventured in the lower nineties.

Perhaps it was quite telling that Betis’ three goals originated from two set-pieces and one deep turnover by Rennes. Even though some chances were created from open play, this remains a huge problem for Setién’s team. They are the fourth worst team at creating chances from open play in LaLiga, for instance.

Stade Rennais cannot be happy with this result, having led by two goals on two occasions. Their own tactical indiscipline cost them a good result here, even though Betis are prone to conceding of course. The 3-3 result in the first leg tilts the role of favorites slightly towards the Spaniards, which may just fit Rennes and Julien Stéphan. 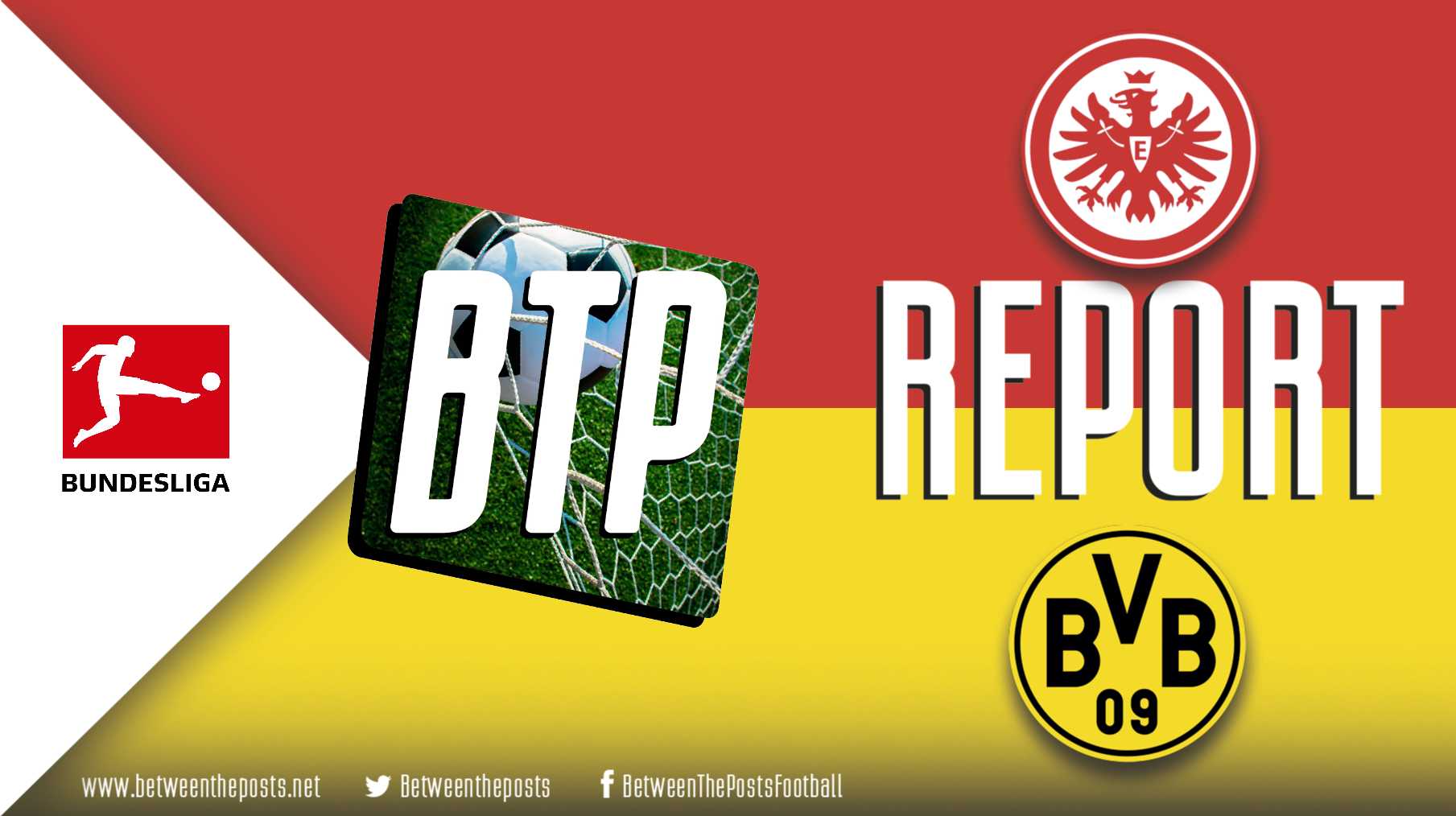 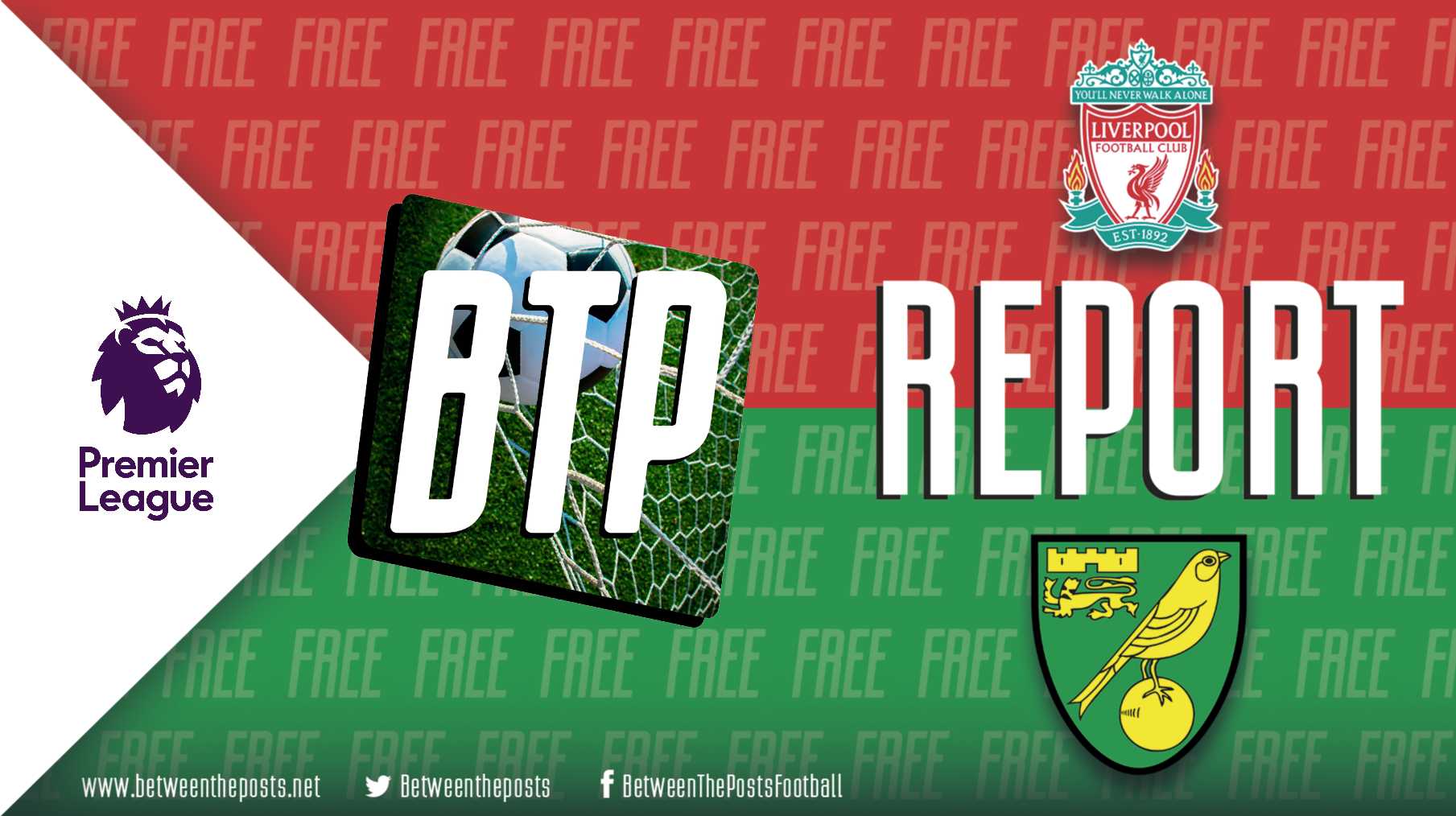