The North London Derby only produces chaotic or confounding games, and this tie somehow achieved both outcomes in one stroke. A red card against Arsenal’s Rob Holding meant that Arsenal played with a numerical disadvantage for an hour, and Harry Kane took full advantage by scoring a brace and creating another for strike partner Heung-Min Son.

For the past few weeks, London has been the epicenter of the battle for the fourth and final Champions League place.

Coming into this game, Antonio Conte’s side seemed to have found their groove, with exhaustive work on the shape finally fixing their once porous defense. Following a storming victory away to Aston Villa, Spurs fell to Graham Potter’s superb Brighton, before recovering brilliantly to secure a draw against Liverpool (a match in which they could have taken all three points). The atmosphere at the Tottenham Hotspur Stadium had clearly taken a positive turn – there was no better time to face their archrivals in a clash where both sides had everything to play for. There was just one change to the side that faced Liverpool, with Davinson Sánchez replacing Cuti Romero in defense.

A similarly positive attitude pervaded Arsenal’s ranks, especially after manager Mikel Arteta celebrated his contract extension by recording four consecutive wins (beating Chelsea and Manchester United in the process). A superbly taken win at West Ham was followed by a comfortable victory against struggling Leeds United, and Arsenal seemed ready to take the final step in their journey back to Europe after having wrested control of their own destiny.

Once the lineups were announced, it was evident that Arsenal would stick with their 4-2-3-1 shape against Spurs preferred 3-4-3 structure. In view of such a decision, the pressing assignments decided by Arteta would make the difference, and so it proved as evidenced by the events of the first half.

During buildup, Arsenal used asymmetric fullbacks & utilized Eddie Nketiah in deeper areas, while Martinelli and Saka held the width on either flank. 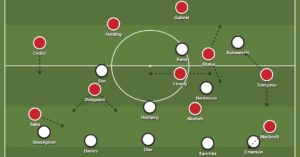 Arsenal’s buildup structure when they weren’t going long. There were quite a few rotations on the left.

With Elneny manning the middle of the pitch, Xhaka was free to roam into advanced areas or drop into the backline, both of which were frequent actions on the midfielder’s part. With Martinelli stretching the Spurs defense by fixing Emerson, Arsenal created a structure on the left involving Tomiyasu, Xhaka and Ødegaard. There were two ideas involved in this setup: first, Martinelli (who had isolated Emerson) could dart in behind and receive the pass; and second, from the wing, the ball could be shifted inside the Spurs block, where Nketiah and Saka could both make seam runs to crash the box.

The latter point is crucial, since Saka – though named as the right winger – seldom stuck to his wide position. Often, he moved inside to combine with Ødegaard once Cédric had overlapped on the right, with Nketiah also moving actively to participate in wall passes and third man actions.

This kind of manipulation was possible since Spurs retreated into their 5-3-2 block when Arsenal advanced, where the double pivot were responsible for their Arsenal counterparts and Dejan Kulusevski dropped into midfield to try and muck up the rotations on the left. One way that Arsenal could exploit these movements was when Xhaka dropped deep into the left halfspace, which pulled Rodrigo Bentancur out of position. This created space in midfield into which Nketiah or Saka could drop, which happened a couple of times in the first half.

One of the key approaches for Arsenal involved goalkeeper Aaron Ramsdale’s long balls in buildup, for which Arsenal prepared a specific structure with Saka as the primary recipient.

Arsenal’s long ball structure, where Saka was usually the main target against the physically inferior pair of Davies and Sessegnon.

The idea behind this was self-evident: by winning the second ball off the contested pass, Arsenal could get any one of their dangerous forwards involved in the box. Given that the structure was titled to the right, it seemed that Martinelli or Nketiah would be the key targets once the ball was shifted inside, but Spurs were careful not to allow the scheme to reach its conclusion. However, Arsenal did their get their (aforementioned) buildup sequences going following the pass, so the approach cannot be deemed a complete failure.

A sequence in the 25th minute showed the downside of Arsenal’s approach, which would be exploited just a few minutes later. Rob Holding had already conceded a penalty to Son in the box, but the reality was that the Spurs winger routinely sought out the defender in a bid to isolate him in space.

Right here: why did Arteta think Holding v. Son would be a good match-up for #AFC? Even when Arsenal were defending deep, Son waited for Sessesgnon to occupy Cedric before moving inside to establish the 1v1 with Holding. Clearly a matchup #Spurs were looking to (& did) exploit pic.twitter.com/06VTInI1sy

In the above sequence, Arsenal couldn’t corral the second ball, which led to Son receiving the pass against Holding with the latter being forced to foul him. This was not a one-off: even in their settled possession phases, Son would toggle between Cédric and Holding as the matchups he could exploit. When Sessegnon overlapped, he would shift inside to once again establish the matchup against Holding, a fact that inexplicably seemed to escape Arteta. Before the coach could notice, the damage had been done as Holding received his marching orders following a second yellow card. Kane’s second goal quickly followed as Nketiah forgot to mark him at the far post, and the striker easily directed Bentancur’s header into the box with a diving effort.

Setting aside the Son versus Holding matchup, there was another aspect of Arsenal’s scheme that can be critiqued. Out of possession, Arsenal would press using a 4-1-4-1/4-1-3-2 shape, with Xhaka alongside Nketiah in the first line of pressure. The visitors’ aim seemed to be to prompt passes to the flanks, following which they could trap Spurs along the touchline.

Davinson Sanchez is the weak spot in possession and he's had time constantly, with Martinelli tracking Emerson and Xhaka keeping his shape in midfield. It is and was the wrong plan.

Curiously, they did not choose to use Davinson Sánchez as a pressing trigger, despite the defender’s issues in dealing with ptessure. This was an odd decision particularly because Arsenal did hurry him up when they pressed back passes from Emerson – it would be interesting to know Arteta’s reasons behind the decision to wait for Sánchez to make unforced errors.

The (forced) change in structure

When pushed back in the first half, Arsenal set up a 5-3-2 low block, with Martinelli acting as a wingback and Saka dropping into the midfield line. However, they remained aggressive from this structure, with Nketiah pushing forward to press and releasing Arsenal from their block.

In the immediate aftermath of the red card, this approach continued, albeit with some tweaks which continued into the second half. Tomiyasu switched to playing right center-back, while Xhaka dropped in as the left back. Saka switched over to the left to occupy the attacking midfielder role, while Ødegaard dropped deeper alongside Elneny. Despite being a man down, arsenal continued their attacking approach when they had the ball, and there were a couple of close calls on either side of halftime following rapid buildup sequences.

In the second half, the defensive structure was a 5-3-1 diamond formation, which unfolded into a 4-3-2 in possession.

Martinelli remained in his original role while Saka began dropping deeper to receive from Gabriel and Xhaka. While Tottenham had previously only pressed when Arsenal played back passes (such that they could match the three at the back with their forwards), they began pressing more aggressively following the red card. However, they fell into the 5-4-1 block when pushed backwards, which allowed arsenal to retain a semblance of offense. In these sequences it was common to see Tomiyasu operate almost as a fullback, with Xhaka doing the same from deeper in the left halfspace.

Spurs run out the clock

Against ten men, Spurs were comfortable knocking the ball around and incisively moving forward. One of Bentancur or Højbjerg dropped into the backline, giving Sánchez, Sessegnon and Emerson better angles from which he could find Kane or Son. Additionally, wide rotations were common, with the wingbacks coming inside and wide forwards moving to the wings. This seemed to be a way to draw the Arsenal fullbacks out to face the forwards, while the wingback can receive on the underlap and cut the ball inside. Additionally, Bentancur and Højbjerg played on different heights, which ensured a central presence behind the forward trio.

During these sequences, Kane often attacked the channels with runs, tormenting Gabriel in particular. One such play saw Sánchez hit a diagonal pass into Kane, who posted up against Gabriel. Although the defender was able to kick the ball away, it only reached Son, who promptly smashed it in for Spurs’ third of the evening.

With the lead secured and pattern of play established, the final half hour was a nonevent as far as major tactical changes were concerned. Arteta replaced Martinelli with Emile Smith-Rowe which saw Saka move into Martinelli’s spot as a quasi-wingback, but the game state remained unchanged. There were a number of opportunities for Spurs to increase their lead, but the scoreline ultimately remained unchanged. 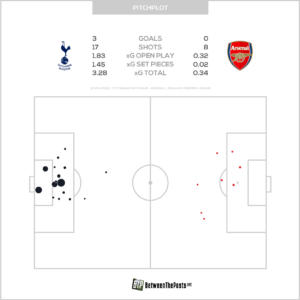 The ramifications of this game bear no repetition: the winner would have a leg up on the other in the race for fourth place. Arsenal could have controlled their own destiny with the win, but the red card was an event no one could have seen coming. That they remained positive despite that is a bonus, but the pressure is now on them to secure wins against both Newcastle United and everton.

Conte’s side achieved what they set out to do, though they remain a point behind their rivals. On present form, it seems assured that they will win their remaining games, but it may not be enough given their position on the table.