Spurs have surged up the standings into the top four, rendering this fixture a chance to shore up their bid for a Champions League place. But their guests from the south coast have an uncanny habit of wreaking havoc in the capital city. A change in formation, a pair of dynamic midfield motors and a moment of class at the death toppled the ambitions of yet another top six outfit.

For many, Spurs to Antonio Conte is what water is to oil. This fiery, finicky Italian manager should not have been able to settle at a club where scant silverware and frugal spending have been the norm. Yet, while the final outlook of his tenure is far from certain, the pair are now on the cusp of a top four spot for the first time in three years. Furthermore, this outfit is riding the crest of a wave thanks to a run of four Premier League wins in a row. But would a banana skin of a fixture now halt the impetus?

Harboring dreams of a finish in the top half of the table at the turn of the new year, Brighton suffered a six game losing streak that cooled expectations. But to still sit 11 points ahead of the bottom three at the end of that run stresses how Graham Potter continues to impress on the south coast. A thorn in the side of the top six across the season, their safety is no longer under threat. Coming off the back of a 2-1 victory away to Arsenal, could they now throw another twist in the race for the Champions League?

In better health off the back of a positive COVID-19 test, Conte set up his men in their usual 3-4-3 formation. Christian Romero, Eric Dier, and Ben Davies were the base of three at the back. Rodrigo Betancur partnered with Pierre-Emile Højbjerg in the middle of the park, and winter signing Dejan Kulusevski joined Harry Kane and Son Heung-min in the front three. A knee injury ruled out Matt Doherty till the end of the season, so Sergio Reguilón and Emerson Royal filled the wing-back slots.

Potter also made only one alteration to the starting eleven he picked last time out. Danny Welbeck dropped to the bench, making way at the head of the attack for Alexis MacAllister. Pascal Groß, who operated on the flank against Arsenal, moved into the midfield, opening up a berth for Tariq Lamptey to come back into the fold as a right wing-back. Moisés Caicedo, assistant of the winning goal during that game in his league debut for the club, sought to star once more with help from Yves Bissouma.

Back five, not a back three

Brighton employed another back three in this game, but it manifested differently. Away at Arsenal, the chain at the back fanned out broadly to nearly the width of the pitch. But now, Potter’s men faced wing-backs in an attack that could threaten their wide central defenders with depth runs and overloads from the flanks. To this end, Lamptey and Leandro Trossard stayed deeper, generating a row of five.

Thus, the away team relied on a 5-3-2 medium block off the ball, where Enock Mwepu began next to MacAllister in the first line of the defense. Yet, it would not be a Potter team without several details.

Rather than staying centrally, Mwepu oriented himself toward Ben Davies. If a member of the double pivot dropped into the base of three and the Welshman moved outward to the fullback zone, Mwepu slid laterally to cover him. On the other hand, MacAllister would close down Eric Dier, often inviting Spurs to build up through their right edge. The next aspect of Brighton’s plan duly came to the fore.

Caicedo and Groß, the pair of central midfielders, initially marked the double pivot. If Caicedo moved out to press Romero, it was the role of MacAllister to drop and cover Højbjerg. As these mechanisms did not routinely force Bissouma to step out from the base of the midfield, he was a free man to patrol the room in front of the back five where Harry Kane stitches the play together. His dynamism and physique suited the role, but Potter did what any good manager does to make a player’s life easier. 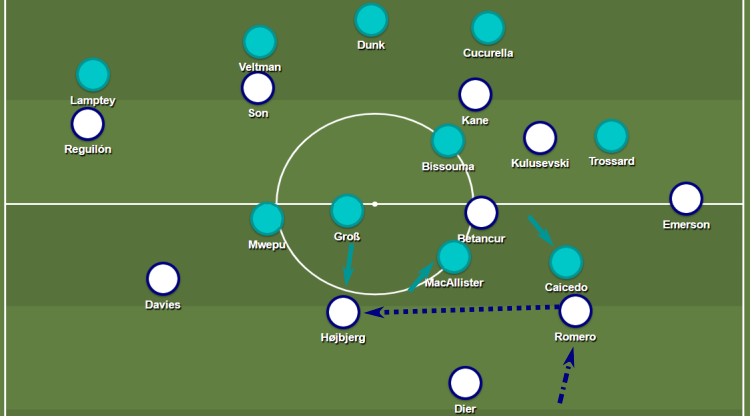 Bissouma bosses the middle of the park

Brighton immediately found a way to control the progressive routes of the 3-2 base at the bottom of Spurs’ structure. So, the hosts adapted. Both Højbjerg and Bentancur quickly began dropping laterally to break free from the highly man-oriented coverage of the block. So, 5-2-3 and 5-1-4 configurations were frequent, featuring Mwepu wide on the right and Groß in an advanced role through the middle.

43rd minute: one of many interceptions Bissouma made through his anchor role in Brighton’s block.

But it made no difference to Potter’s men. Aggressive marking off the front from the back five complicated ball receptions into feet with vertical passes. Lewis Dunk was always close to Kane, while Bissouma intercepted several loose balls in the lateral gap between the central midfielders. Bereft of ideas, Spurs could not manage to hit an effort on target before the end of the first half.

Dier was the recipient of most of the progressive passing: a damning indictment of Spurs’ offense.

So, it was no shock to observe a goalless stalemate at half time between these two outfits. Brighton’s lack of incision in the final third, facing a miserly back five as of late, did not lend itself to a deluge of goals. But the intention to play through the thirds from the away team was much more pronounced. 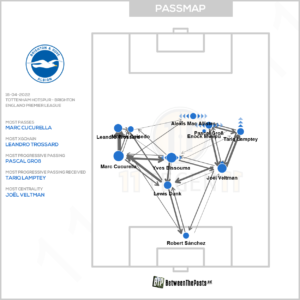 Once they reached the middle third of the pitch, the back three often tilted asymmetrically to the left. Thus, Marc Cucurella moved up the flank to connect with Trossard and Caicedo. The latter’s ball carrying and dynamism brought a new threat between the lines to forge spells of combination play. Groß, on the right side, frequently dropped behind Lamptey to progress attacks from deep. Shots were scarce, but Potter’s plan had come to fruition. One could not say the same for his opposite number.

🎙 “We have to restart and prepare for Brentford.”

If his half time team talk could not cajole Spurs into their rhythm, Conte hoped new faces would. Kulusevski made way for Lucas Moura, and Steven Bergwijn came in for Son, seeking to cash in either side of Kane. Between these two substitutions, the introduction of Harry Winks in place of Bentancur intended to sharpen the circulation of the ball. In the end, none of the changes worked. On the other hand, Brighton went from strength to strength. The presence of Welbeck on the last line allowed MacAllister to work in tight spaces between the lines, contributing to a rising shot count.

A toilsome afternoon for Spurs seemed as if it would at least produce a point to edge them closer to sealing fourth spot in the table. Yet, Brighton had more misery in store for the hosts. Welbeck, Adam Lallana, and Trossard combined on the left flank to arrive at the edge of the box. Romero scrambled to cut out the danger, but a loss of footing handed the ball back to the wing-back. Now in the penalty area, his dummy to strike at goal froze Dier, creating a shooting lane toward the bottom right corner that he found thanks to the outside of his right boot. Brighton had broken the deadlock at the death.

Members of rival fanbases will mock Spurs for bottling this match, but credit should go to Brighton. Taking their second win in a row in North London, the visitors seem like they have seen the back of their drastic slump in form. Potter made the difference from the dugout, devising a cunning plan to throw the favorites out of sync. Moreover, his introduction of Caicedo has brought a new dynamic to the midfield. Savvy signings and astute management have given the club a campaign to remember.

However, no one can contest that Conte’s men adequately helped themselves. Even if a stalemate was a more fitting outcome, their lethargy on the ball set the tone for a dreary display. The best piece of news for Spurs was a third defeat on the bounce for North London rivals Arsenal, still three points adrift of fourth place along with Manchester United. The advantage still lies with them ahead of the next round of fixtures, but their manager will not accept a repetition of this lifeless performance. 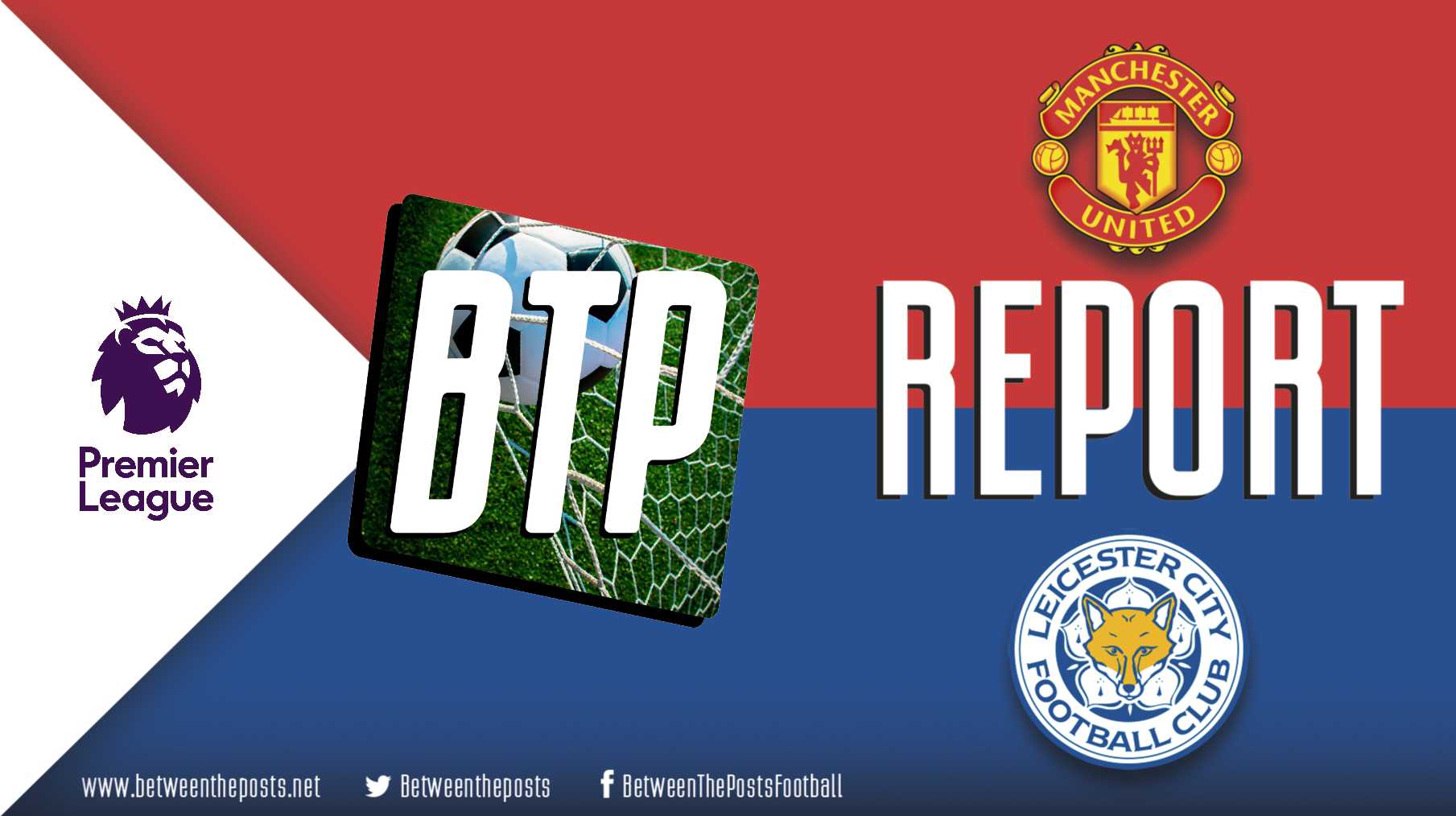