Tottenham Hotspur’s bright spark to the game forced an adjustment from Thomas Tuchel. Chelsea fixed their defensive issues at the end of the first half, to flex their attacking strength throughout the second, as they romped three goals past Spurs who couldn’t find a solution.

The Premier League’s ‘Big Six’ has been ended by the different trajectories those clubs are taking.

Spurs started the season with three consecutive 1-0 wins, outshot in two of them. A 3-0 defeat away to Crystal Palace, which came after the international break, highlighted massive issues in their shape and passivity both in and out of possession. Nuno Espírito Santo is a gifted coach with a squad that is technically excellent, but more convincing displays need to follow.

Meanwhile, Chelsea’s growth in 2021 has seen them create further distance between themselves and other members of the six. Thomas Tuchel has remained in the same system since day one and performances have only been more refined, although performances against Aston Villa and Zenit St. Petersburg may be ones to reflect on, having been beaten on expected goals in both matches.

Tottenham made four changes from the team that were comfortably beaten by Crystal Palace. Cristian Romero made his debut in defense, whilst Giovani Lo Celso also returned from Croatia. Tanguy Ndombele started for the first time this season in the midfield, whilst Heung-Min Son also returned to the side.

Tuchel made five changes from the victory against Aston Villa, which included Kepa Arrizabalaga in goal. Andreas Christensen returned to the right of the back three, whilst Cesar Azpilicueta started at right wingback. Jorginho and Mason Mount were the two inclusions to the squad, in their usual 3-4-2-1/3-4-3 system.

In their narrow 4-3-3 pressing scheme, Tottenham was able to blunt Chelsea’s buildup and force several set-piece opportunities for the hosts. Liverpool caused Chelsea difficulties in a similar shape, before the international break, and Tottenham provided issues, even if their pressing intensity was a little lower.

Harry Kane positioned himself on the left of the front three, which saw Son operate in the center and Lo Celso to the right. Son shifted between pressing Thiago Silva and using his cover shadow to block a pass to Jorginho, which was an important component, as Chelsea weren’t able to break the lines so easily. 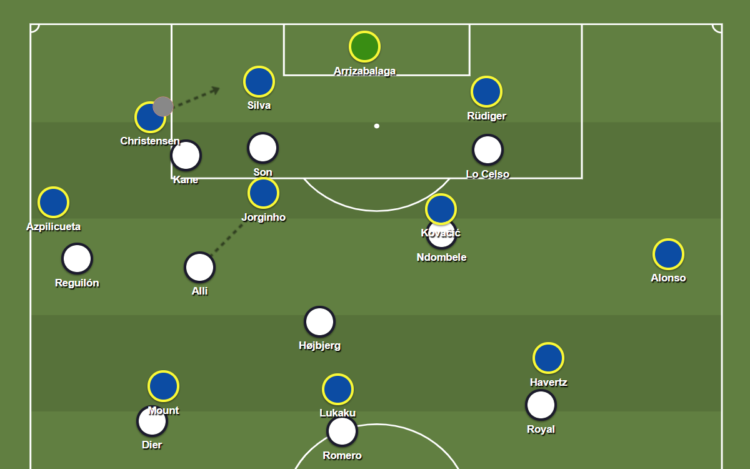 8th minute: Tottenham’s 4-3-3 pressing encouraged Chelsea to play backwards thanks to effective shifting and no routes open to the double pivot. Spurs forced Chelsea to the other flank before Antonio Rüdiger’s pass went out for a throw-in.

The strength of Spurs’ 4-3-3 shape was that they were able to overload When one team has more players in a certain area or zone than the other team. central areas, whilst able to squeeze space on Chelsea’s wing-backs in possession. When Mason Mount moved into a deeper position, Dele Alli could mark the ten, whilst Pierre-Emile Højbjerg pressed Jorginho to stop a free man being created in possession.

Although Chelsea had a few moments on the transition, Tottenham had control of the first period and Tuchel’s team struggled to get out of their half. However, converting such control into quality shots proved a difficult task, as Chelsea were able to regroup into their defensive block quickly and Spurs failed to develop effective transitions to get behind the last line.

What caused Tuchel to tinker?

In possession, Tottenham resembled more of a 4-3-2-1 shape. Although Spurs players appeared to cluster, certainly towards the left, the dynamic movements of the forwards partnered with the wide central midfielders, constantly in space, resulted in Nuno’s team moving the ball through the lines effectively between phases. 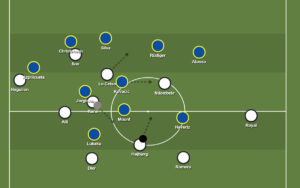 15th minute: Example of how Tottenham progressed between the lines. Kane dropped deep to encourage Chelsea towards the receiver before he recycled the ball back to Højbjerg (Grey ball, first pass). Ndombele’s position opened the progressive pass (Black ball, second pass), whilst Lo Celso made the third man run behind the central midfielders.

Both Alli and Ndombele could move out of central spaces, into areas behind the advancing fullback to receive the ball. Tottenham favored the left side of the field, where Kane dropped deep and more space was made, thanks to Sergio Reguilón’s high positioning. Although the option to switch play was not available, shorter passing combinations where and Spurs were able to progress thanks to Alli and Ndombele being free, supported by the third man runs from Lo Celso, out of the ten position.

After twenty minutes, Chelsea got back into the match with more phases of their own. In their defensive block, Romelu Lukaku and Kai Havertz formed a front two, whilst Mount covered Højbjerg, who dropped between the center-backs on a number of buildup phases. Until the half-hour mark, Chelsea set up in a 3-4-1-2/5-2-3 defensive block, but this changed.

Mount was moved into the midfield line, on the right of Jorginho and Mateo Kovačić, as Chelsea changed into a 3-5-2/5-3-2 shape. As a result of this tactical tweak, they were now able to match their opponent’s set-up and deploy a more effective press onto the wide central midfielders in possession. The extra midfielder denied Spurs the ability to find either Kane or Lo Celso between the lines. 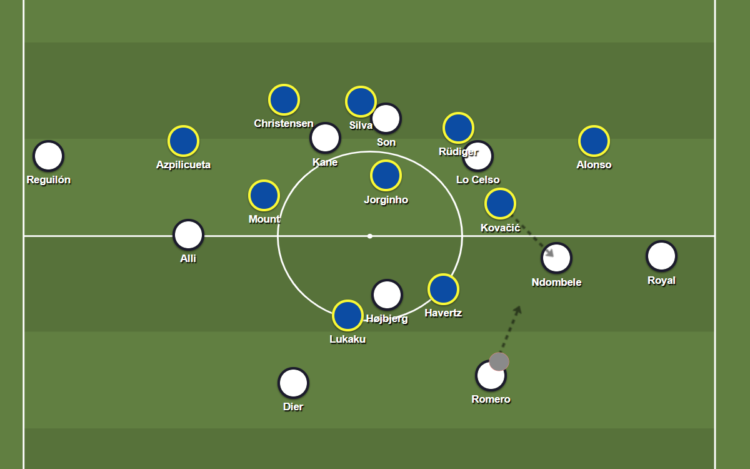 Tottenham’s passing sequences were now more lateral, rather than vertical. Spurs were able to carve through on one occasion, thanks to a similar pattern between Højbjerg, Ndombele and Lo Celso, which put Son one-versus-one with Arrizabalaga, but the goalkeeper was able to close space quickly. For the next hour, Spurs would record just two more shots after this sequence.

Back out with a bang

Tuchel reinforced defensive stability, at the start of the second half, as Mount was replaced by N’Golo Kanté. Chelsea had solved their issues against Spurs’ forms of progression, but now it was time to carve through Tottenham’s press, more notably the issues in their counterpressing.

When the ball circulated back to the center-backs, Spurs forwards aggressively pressed without being backed by the midfielders and passing lanes forward were created. Two consecutive switches were made to Marcos Alonso down the left flank, the first from Jorginho which stretched the defensive line even further and the second from Silva which set up an excellent volley from Alonso.

Chelsea were also able to profit from the third man runs that Kanté offered, as Spurs counterpress struggled to handle their opponent’s early phases. A few minutes into the second half and Chelsea got their goal. Alonso’s outswinger was met by Thiago Silva, who was curiously marked by Alli on corner kicks. 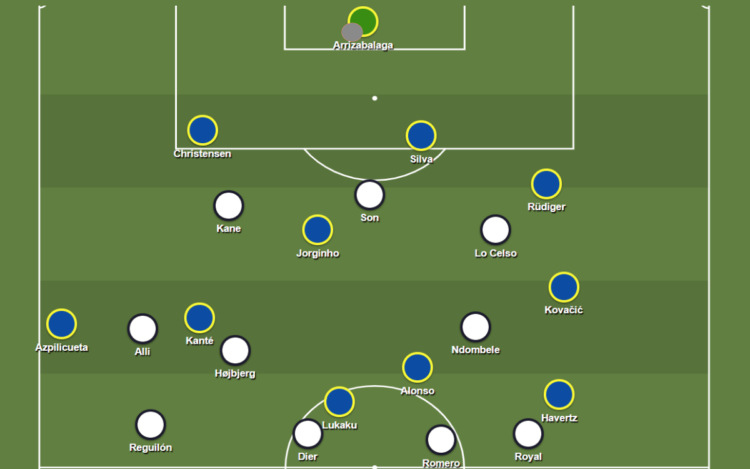 52nd minute: Player positions, in the buildup to Alonso’s chance. Rotation between Alonso and Havertz enabled Alonso to receive in space, off long ball towards Lukaku.

Alonso’s effect continued to cause a lot of danger for Tottenham, due to the freedom he was given to move out of position. He could pin Emerson Royal deep to free space Kovačić or move infield to provide a passing lane behind the Tottenham midfield. These central positions enabled rotation between himself and Havertz, which caused further danger and routes of progression for Chelsea to take.

Tuchel’s team grabbed their second goal, thanks to excellent counterpressing from Kovačić and Antonio Rüdiger to stop Lo Celso from transitioning the ball forward. Kanté’s strike took a wicked deflection, but enough to see the ball bounce off the post and into the back of the net.

The artform of seeing a game out

Nuno attempted to gain back control with a double substitution, just after the hour mark. Ndombele and Lo Celso were replaced by Oliver Skipp and Bryan Gil, which resulted in Tottenham moving into a 4-2-3-1/4-2-4 in possession.

The change to a double pivot saw Spurs switch their focus to building more down the channels, but they couldn’t find a solution against Chelsea’s 5-3-2 medium block. The ball circulated amongst the center-backs and double pivot before the full-backs got into possession on the halfway line, but although Kane, Alli and Gil continued to drop into space, no openings were created and Chelsea remained in their compact block comfortably.

The last twenty minutes saw the most standard of performances under Tuchel, once they had the lead. Chelsea lowered the tempo and used their expansive shape to pass around Tottenham. Kanté’s third man runs continued to cause chaos, especially when Havertz roamed towards the right channel and pinned Reguilón deep, whilst Alli was occupied by Azpilicueta and Skipp occupied by Jorginho. 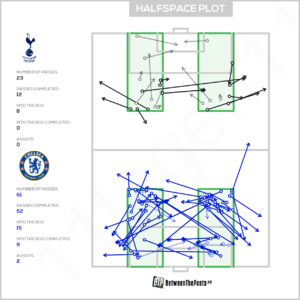 Furthermore, Chelsea used this game state to flex their transitional muscles, as a vast amount of space opened on turnovers and when the double pivot was pulled to one side. Substitute Timo Werner was able to move into great positions around the box, thanks to excellent carrying from Lukaku.

Chelsea were able to get their third goal before the game was up. Tottenham failed to move out of their box quick enough, of a second phase from a corner, as Werner was able to freely move the ball back into the box. The cutback reached Rüdiger, whose finish into the far corner would be an attempt that any striker would be proud of.

Tottenham with Nuno Espírito Santo will continue to remain a curious partnership, but his ideas for Spurs are different to Wolverhampton Wanderers. However, executing such ideas are important. Tottenham continued to show structural issues throughout and was nullified quite easily by Chelsea, once they switched. Next up, Arsenal away.

In a sticky matchup, Tuchel adapted and regular Chelsea patterns flowed through in the second half. Not only is their squad stacked, but the tactical flexibility is there too and Chelsea look like one of the favourites to threaten Manchester City’s crown. They play Pep Guardiola’s team next, the first matchup since the Champions League final. 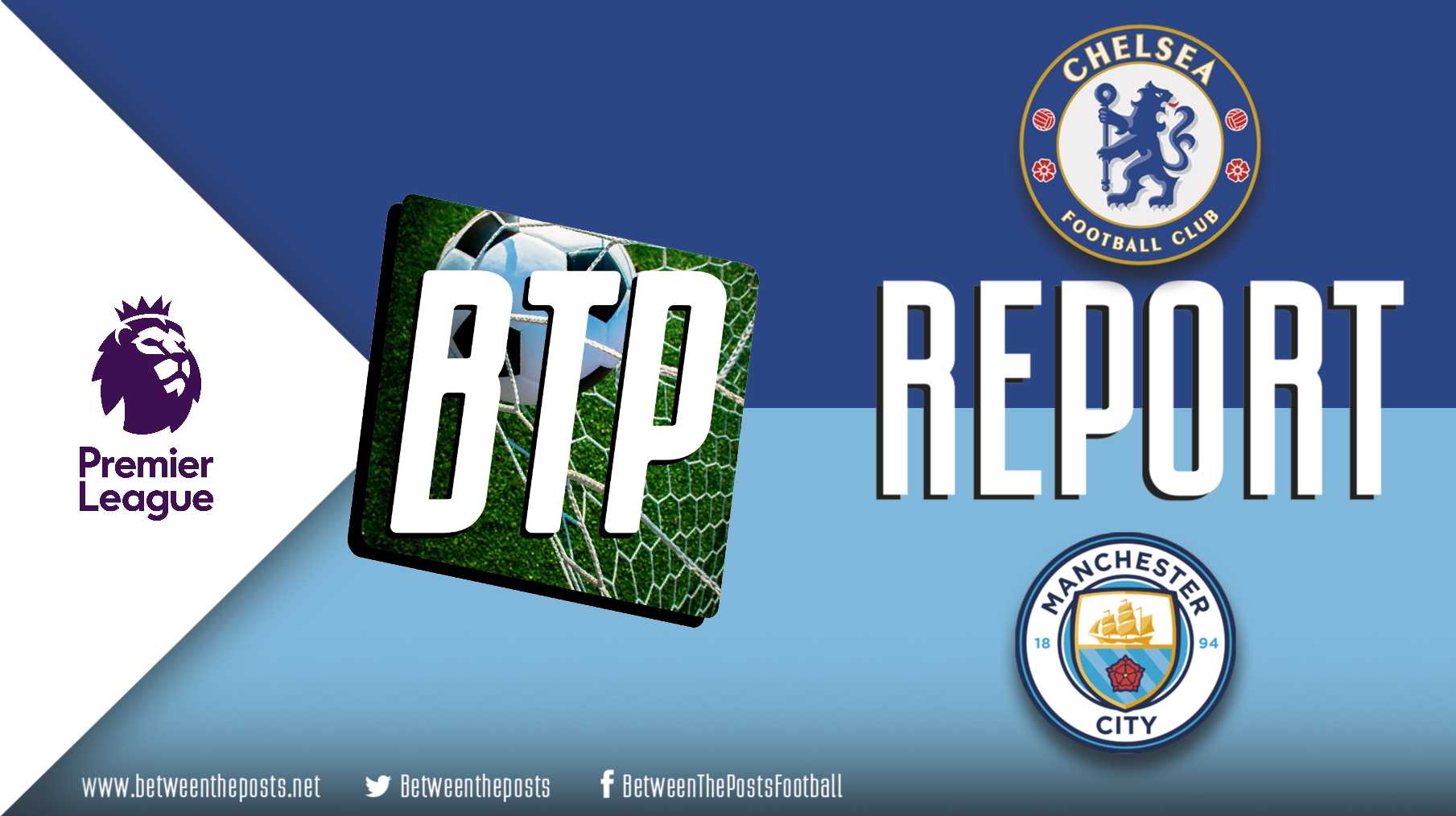