For thirty minutes, Tottenham Hotspur and Crystal Palace produced an intriguing but unproductive affair. However, the hosts had showcased solutions to passing problems and seized on a Palace collapse to gain a comfortable three points.

When the time turned to reinvent, both London clubs looked to iconic midfielders, at different stages of their managerial careers. Nevertheless, after only a few months, both Antonio Conte and Patrick Vieria appear to have clear blueprints for their clubs.

Though Spurs had limped over the line in their first few matches, an excellent display against Liverpool indicated a clear turn of the tide. The transitions of Heung-Min Son and Harry Kane made a glorious and refreshed return, whilst Spurs were highly organized in the defensive phase. They are still short in a few areas, but this is a squad that was badly let down by their Portuguese predecessors, who didn’t tender to the high intensity that this team is catered for.

Meanwhile, Crystal Palace had gone through one of the most aggressive reforms seen in a long time. Roy Hodgson’s dogmatism was replaced by a more modern approach under Vieria, built on recruiting and developing younger talents, within a positive passing style on the pitch. Joachim Andersen and Marc Guéhi have built the blocks to play out from the back, but it’s the flexibility of Conor Gallagher which has offered the potency going forward that has caught the eye.

Conte made five changes as Spurs returned to their 3-4-2-1 system. Ben Davies and Ryan Sessegnon were replaced by Japhet Tanganga and Sergio Reguilón. Both Oliver Skipp and Pierre-Emile Højbjerg came in as the double pivot, whilst Lucas Moura also started to aid the attack.

With COVID cases hitting the Palace team, Patrick Vieira and several players were unavailable. Nevertheless, this was still a strong team in their usual 4-3-3 formation. Just one change was made, with Andersen replacing Guéhi in the defense, to partner next to James Tomkins.

A balanced bout with similar problems

When two teams that aim to control possession lock horns, equal spells of passing phases are often exchanged. The match had two important traits that set the game state; first was the length of play, with the ball rarely coming out or play being broken up and the second was the high set-ups which weren’t super engaged in pressing their opponents off the ball, more restricting them moving it forward.

Crystal Palace pressing shapes varied between 4-2-3-1, 4-2-4 and 4-1-2-3 formations, which was established by the positioning of both Gallagher and Will Hughes in the midfield. When Tottenham had the ball in their defensive third, Palace didn’t engage high up the field, but more aggressive individual triggers were set when in their medium block or following the ball back up the field when Spurs were forced backwards.

Tottenham’s 3-4-2-1 system was similar in this regard, although a lot of Palace passes began when they were already out of their defensive third, against Spurs who looked to reshape rather than counterpress. During the first periods, Palace had got the ball into the opposition half more than the hosts. Their recycling of possession was clean as they were able to establish pairings between fullback and winger down the channels, to move the ball at a fast tempo. 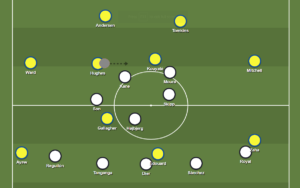 22nd minute: Indicative of Palace problems in possession. Fullbacks were able to recycle possession, but once the ball filtered towards the channels, no movements or patterns enabled the play to progress. In this phase, Mitchell received and underlapped with Zaha, but no other movement was made to drag Tottenham out.

Though Vieria’s team looked tidy, their final product was noticeably lacklustre. Once the ball had funnelled towards the channels, there was no way that they could move the ball back inside. This was due to the lack of movement or rotation in the center, Hughes and Cheikhou Kouyaté remained deep, whilst Gallagher was disconnected, having to come a lot deeper and wider to aid progression.

Odsonne Édouard moved further to the left due to little engagement on the ball. As a result, Palace was neat but structurally dysfunctional. There was very little penetration or signs of an alternative to create some offensive threat. Tottenham was rarely pulled out of their defensive block, which shifted into a mix between a 5-2-2-1/5-4-1 shape and had an easy job as Palace attacks consistently fizzled into very little.

Wheels on the bus fall off

Tottenham had similar progression problems at the start of the match, especially when trying to move the ball out of the midfield third where Palace was most compact. However, Spurs had showcased several solutions.

Firstly, Højbjerg started to drop closer to the defensive line when Spurs built from the back. This not only offered more verticality towards Skipp, but also Reguilón, whilst there was space open for Son. This encouraged Jordan Ayew to defend more centrally and created more space for Tanganga and Reguilón in the buildup. Secondly, with Palace’s defensive block pulled more to Højbjerg’s side, this made the switch to Emerson Royal a good progressive option, with Lucas Moura in the halfspace to take the ball further forward. 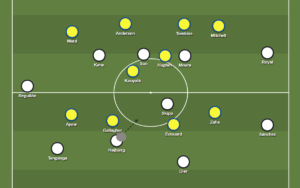 Having received from Eric Dier, Højbjerg dropped to create a better passing angle forward to Skipp, who then connected with Royal free on the right side.

Once the ball was in the final third then a lot more space was provided for the wingbacks against Palace’s back four and the hosts moved the ball a lot faster as a result. Spurs had teased openings, throughout the first half, but blew the lid off after the half-hour mark.

Spurs took the lead with these elements combining. As Palace pulled towards Tottenham’s left side, Højbjerg progressed the ball forward to Moura whilst Royal held the width. As James Tomkins was caught high up, the pitch massively opened for Spurs, with Moura met by Royal’s ball behind the defensive line and an easy squared pass into Harry Kane.

Conte’s team grabbed their second goal two minutes later. This time, Moura roamed into the left halfspace to combine with Skipp, who had also shifted over. Moura’s carry opened a huge amount of space and was met with excellent movement from the Spurs attackers. Son’s diagonal run stopped Tyrick Mitchell from shifting over to confront Royal, whilst Kane opened himself for a pass with a lateral run between the lines. Royal’s cross was met by Moura, with three Spurs players at the back post and only Andersen there to give Palace the chance of defending it. 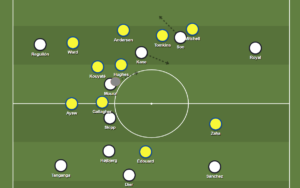 Tottenham was set to establish control, but the final nail was hammered in with Wilfried Zaha’s dismissal just a few moments after the hosts had got their second. Palace shifted into a 4-4-1 defensive block, Gallagher now on the right of the midfield and hopes of getting back into the game firmly shut.

With a two-goal lead and a man advantage, Spurs were now firmly in the driving seat as the game ground to a halt. They were now camped inside the Palace half, against an opponent which didn’t come out and made themselves as compact as possible just in front of the box.

One would expect Spurs to try out more patterns or run through the usual up-back-and-through combinations, which we have seen quite a lot of under Conte. Instead, they had also slowed down the tempo and used their 3-2-5 system to circulate the ball in the opposition half. After twenty-five minutes into the second period, Spurs had attempted just one shot at goal. 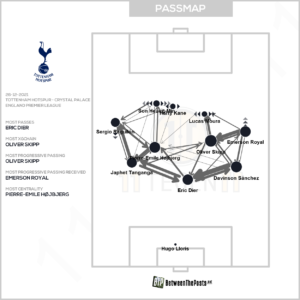 Tottenham camped in the opposition half by constantly circulating the ball around their 3-2-5 set-up in the second half.

Palace had very brief periods where they circulated the ball around their 4-4-1 formation, building from goal-kicks or winning a foul higher up the field when Jack Butland decided to go longer. Nevertheless, their offensive threat was non-existent.

Tottenham got their third goal with fifteen minutes left on the clock, as Palace failed to get the ball out of their defensive third and Spurs kept the pressure on the counterpress. With Kane pinning Mitchell, Moura was left free on the outside, whilst Højbjerg combined the attack through the lines. Moura’s low cross in front of goal was met by Son, who was not going to miss from close range.

From this point, Conte’s men produced a flurry of low-quality late opportunities but established by the wing-backs continuously being left free at the far post when in the final third. Nevertheless, Spurs were able to afford a risk-free half of football, as they strolled over the finish line.

Tottenham had found difficulties at the start, but subtle alterations offered solutions and the Palace implosion had victory sealed after forty minutes. With the North London derby and Conte’s reunion at Stamford Bridge towards the end of January, Spurs need to rack up points to declare siege on fourth place.

Although Vieria-less on the sidelines, Palace’s attack was uninspiring and unproductive. They are much easier on the eye than they were under Hodgson, but more concrete patterns need to be established if they are to shoot up the table. 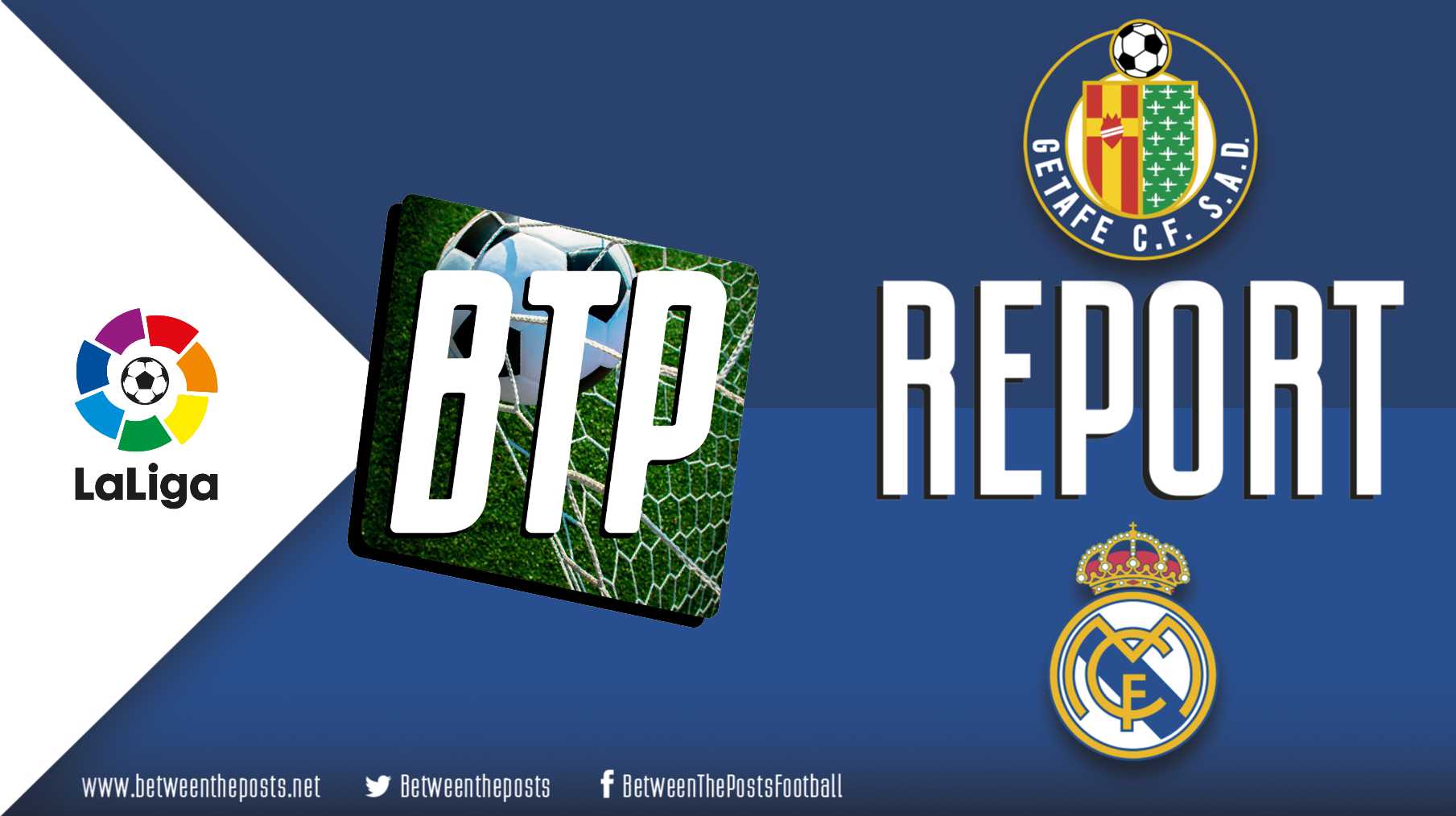