Tottenham were willing to take the game to Barcelona from the first minute until the last, but were undone by repeated individual errors. Lionel Messi, never in need of any extra help, gleefully took advantage of the unforced mistakes and cut the opposition apart with his incisive passing and finishing.

Tottenham hosted Barcelona at Wembley with a whole host of injury issues to deal with. Key players Christian Eriksen, Dele Alli, Mousa Dembélé and Jan Vertonghen were all out of contention for the Champions League clash. Hugo Lloris was the one player who managed to make it back in time, though that would prove to be more of a curse than a boon.

Tottenham manager Mauricio Pochettino dealt with his scarce resources by switching to a back four, having used a back five against Huddersfield. This allowed Erik Lamela to come into the team in attacking midfield. The Argentinian played behind striker Harry Kane and was flanked by Heung-Min Son on the left and Lucas Moura on the right. Harry Winks and Victor Wanyama were also rotated into the side in a double pivot, which sat ahead of a defense consisting of Ben Davies, Davinson Sánchez, Toby Alderweireld and Kieran Trippier.

FC Barcelona, while also making changes from their previous game, were in a bit of a different situation coming into the match. For one, they had less injuries – only center back Samuel Umtiti and right back/central midfielder Sergi Roberto were suffering from knocks.

Secondly, they were on much a worse run of form than their opposition from London. Barcelona had failed to win their last three games. Eager to snap the bad streak, Valverde brought Lionel Messi and Sergio Busquets back into the starting eleven for Ousmane Dembélé and Arturo Vidal respectively and adjusted for the loss of Sergi Roberto by placing Arthur in left central midfield.

Tottenham challenge Barcelona’s build-up with a high press
Pochettino has rarely ever shied away from taking the game to the other team and today was no exception. He ordered his side to engage in a vigorous high press that went all the way back to the goalkeeper.

Kane was tasked with pressing Ter Stegen and cutting off the passing lane to Gerard Piqué, while Lucas Moura pressed Clement Lenglet. Lamela, Winks, and Wanyama all supported these actions by man-marking Busquets, Arthur and Ivan Rakitić respectively. Son started off guarding Nélson Semedo, but eventually ended up scooting infield, once he realized that Barcelona was intent on building through their left flank. 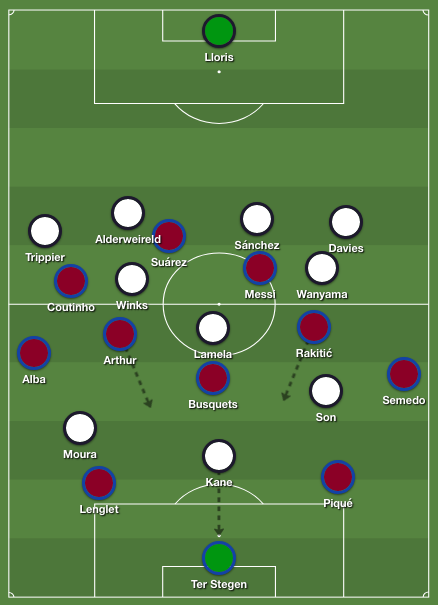 Obviously, this pressing structure left some players free. Moura was supposed to protect the passing lane to Jordi Alba, but the latter was generally found at will thanks to clever lofted passes from Lenglet. This might have been less of an issue had Tottenham managed to trap play on the wing, but they were unable to do so thanks to the fluid movement of FC Barcelona’s central midfielders.

Arthur and Rakitić dropped extremely deep to receive the ball and offer an outlet back towards the center of the pitch. Busquets was not afraid to react to these movements by positioning himself ahead of Arthur and Rakitić, creating fluid positional play that was difficult to handle for  Tottenham’s midfielders.

Winks and Wanyama were hesitant to follow their assignments deep into Barcelona’s half, wary of the space they were leaving behind. Lamela was less fearful than his two midfield partners thanks to being positioned naturally higher as the number ten, but even he lost Busquets in moments throughout the game.

Problems for Tottenham arise early
These issues manifested as early as the first minute, allowing Rakitić, and then Busquets, to receive the ball free of immediate pressure. This permitted Busquets to slide a pass into Messi (the other free man), who shrugged off Son’s weak challenge and played a beautiful diagonal into the path of Alba. Hugo Lloris, perhaps rusty after his time off due to injury, rushed off his line with no chance of winning the ball and watched as Philippe Coutinho received a square pass to make it 1-0 in an open goal.

Tottenham reacted fairly well to this unfortunate mistake. Though Barcelona generally managed to play their way out of the high press, Tottenham’s quick regrouping into a 4-4-2 medium block provided the away side with stiff resistance.

It wasn’t until Sánchez gave the ball away needlessly in his own half that Barcelona strung together a meaningful final third possession and scored. Messi, free to move wherever he pleased, danced into the left halfspace and received a pass from Alba. The little magician then lofted a pass into Suárez, who chested it down for Coutinho to parry a shot off of Lloris. Desperate to keep the play alive, Coutinho wildly kicked the rebound back to the edge of the box, where Rakitić was waiting to volley home a stunner in the 28th minute.

Tottenham score a couple in the second half but can’t overcome individual mistakes
Deflated, the high press did not return until after half-time (thanks to a fiery Pochettino speech, no doubt). This time, Winks and Wanyama doggedly followed Arthur and Rakitić wherever they moved, making life much more difficult for Barcelona.

Keeping with the theme of the game, though, Tottenham shot themselves in the foot. First, Son gave away the ball in midfield in the 46th minute, before Wanyama miscontrolled possession at the halfway line five minutes later. Both moments set Messi on his path towards goal, where he cracked two fine efforts off the post.

Unable to believe their bad luck, Barcelona were slow to react following Messi’s second strike. Lloris took advantage of this with a powerful throw down the right to Lamela, who played a one-two with Lucas Moura in the channel before releasing Kane into space. Kane dumped Semedo to the ground with a nice fake and slotted in an accurate shot past Ter Stegen to make it 2-1 in the 53rd minute.

It wasn’t too long before Barcelona responded, though. Finally enjoying an extended stay in Tottenham’s half following a torrid period in their own, Valverde’s men slowly played the ball from side to side in search of an opening.

A familiar name provided the breakthrough once again, as In the 56th minute, Messi controlled the ball between the lines and looked for his classic pass out to Alba. Son, who had switched off completely, allowed the left-back to run free and play a cutback into the box. Messi got onto the end of it and made no mistake.

With the score at 1-3, Tottenham’s spirit was almost completely crushed. The home side abandoned pressing in favor of the medium block they had been transitioning to the whole game.

It is thus ironic that they ended up scoring their second goal off a rare pressing action, when Kane made a lone movement to steal the ball from Lenglet in the 65th minute. Twenty seconds later, Lamela got onto the ball and smacked a deflected shot into the net to put his side within touching distance once again.

Tottenham increase their share of possession and push to equalize
The fortuitous goal completely changed the complexion of the match. Barcelona lost control of the game and Tottenham began to see more of the ball. 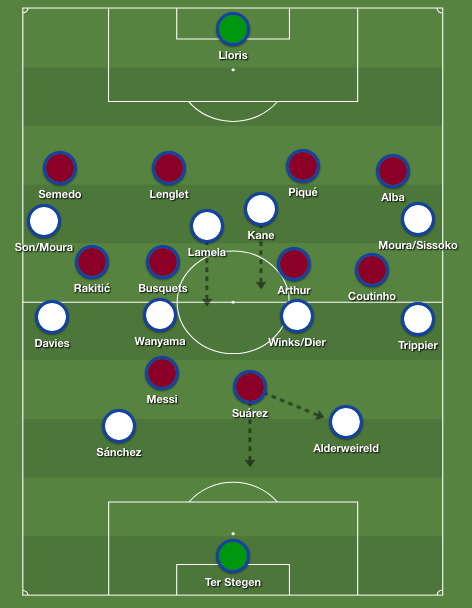 The home team approached this situation similar to how they built out from the back in the few situations prior to Lamela’s strike. Alderweireld and Sánchez patiently shifted the ball out to the fullbacks or tried to find Wanyama (or his replacement Eric Dier) and Winks. Once the two central midfielders were on the ball, they often opted to play vertical passes into Lamela and Kane, who dropped between the lines to lay the ball off to wide players. If that was not possible, Tottenham’s double pivot distributed the ball out wide to Son, Moura, or the subbed-in Moussa Sissoko later on.

Getting into the final third wasn’t too hard, thanks to Messi’s lackadaisical commitment to pressing in contrast to his partner Suárez, but Tottenham were not able to create anything to be especially proud of. Aside from a couple corners and a shot off a cross from Sissoko, the best chances came from Moura, who used his dribbling ability to drive at defenders and shoot on goal.

Then, in the 90th minute, Tottenham gave the ball away foolishly at the back after an impulsive press from Barcelona, allowing Messi to calmly slot away a one-versus-one with Lloris, in more time and space than ever. 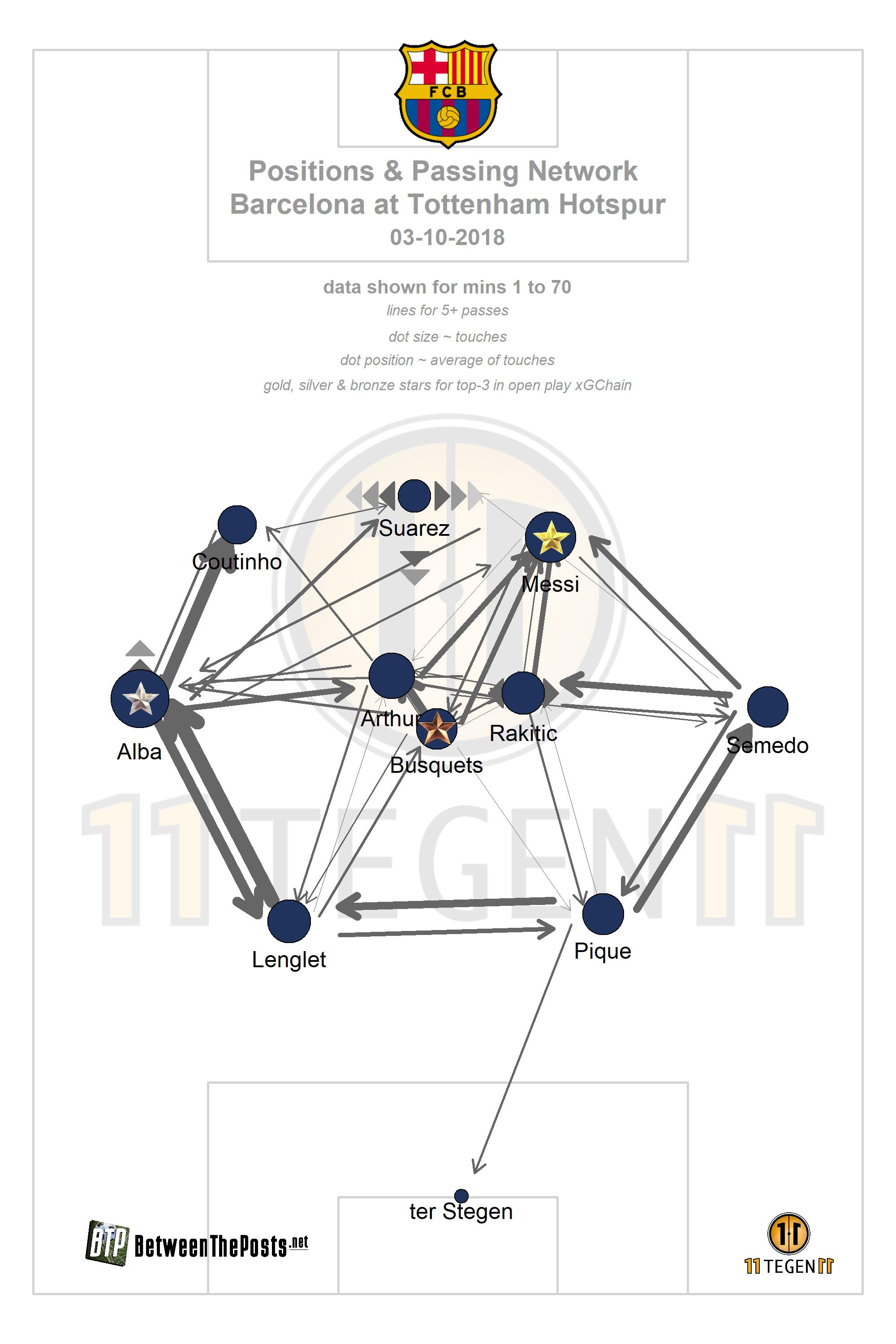 Takeaways
Maurcio Pochettino did his best, considering all the injuries Tottenham suffered. Tottenham did not hide for one of the best teams in the world, and their proactive game plan gave them a good chance of taking something from the match. The onus in the analysis afterwards will be how it was possible that so many individual mistakes happened within the context of their tactics.

FC Barcelona will be delighted that the three-game streak of not winning is over. It’s not a given this year that super clubs progress to the knockout stage with ease. Real Madrid lost against CSKA Moscow, Bayern Munich struggled against Ajax and Manchester City nearly lost two points against Hoffenheim. Barcelona on the other hand, now have six points from two matches and seem to be progressing easily from this group. They will now face Internazionale – who beat PSV Eindhoven – home and away. 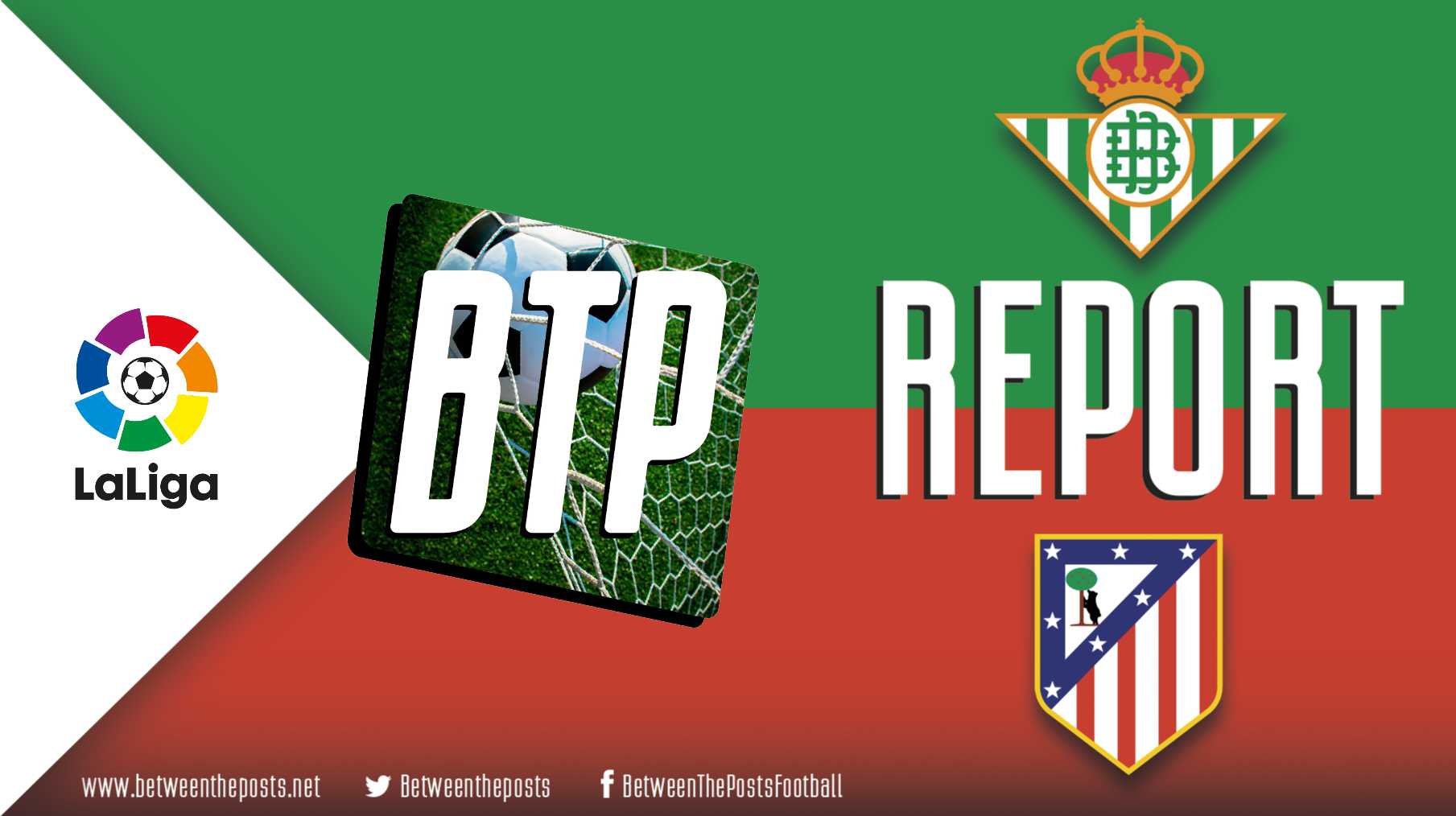 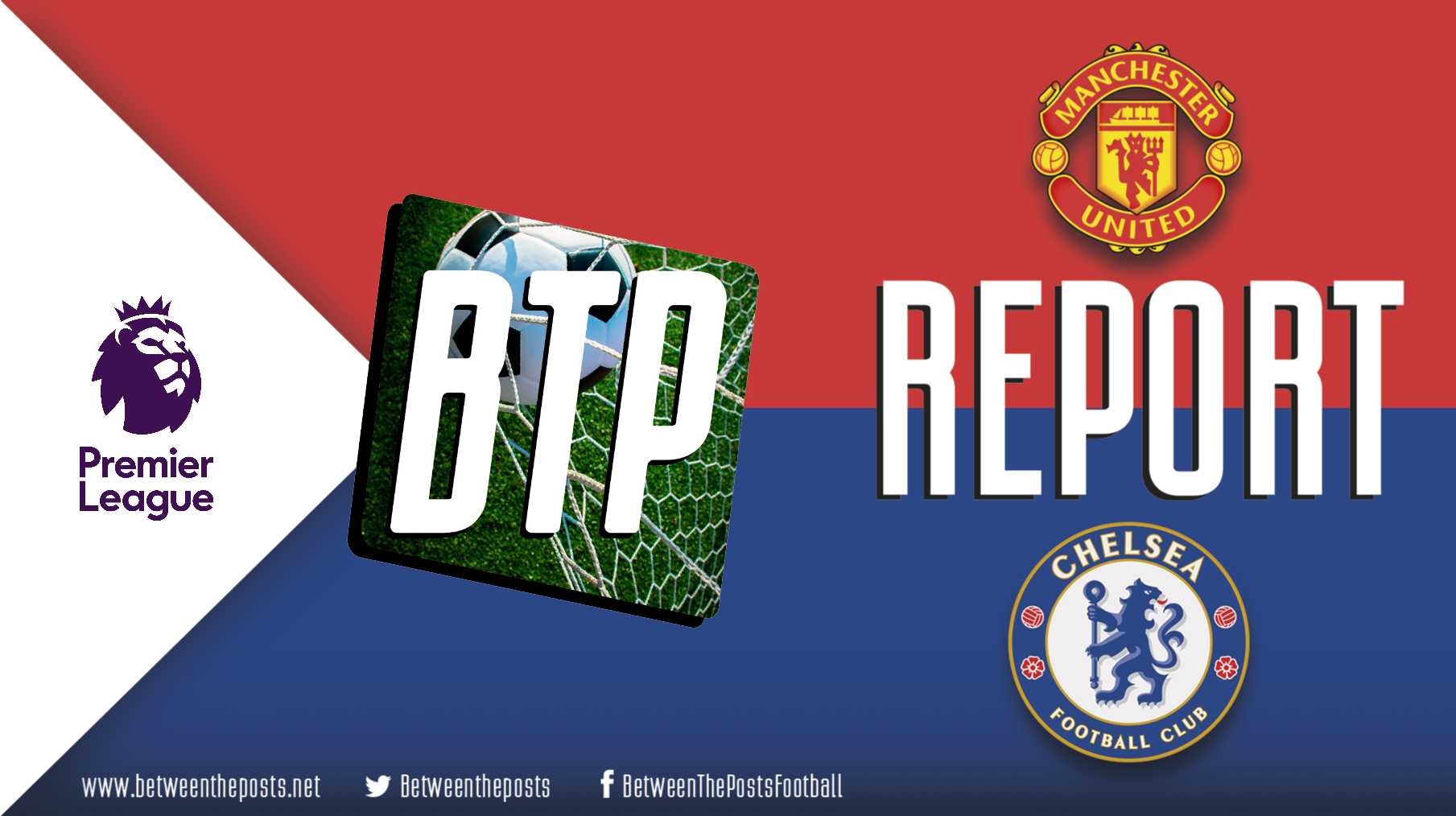