A somewhat anticlimactic end to a spectacular Champions League season saw Liverpool crowned as Champions League winners. An early penalty goal by Mohamed Salah and a late clincher by Divock Origi secured a 2-0 victory. Hidden behind the scoreline, there was a spectacular tactical performance by Mauricio Pochettino’s Tottenham. Liverpool gave the initiative to Tottenham after the early goal, prioritizing their defensive shape above all. Tottenham did a very good job progressing the ball into the final third, but ran into a mix of struggling strikers and sturdy Liverpool defending.

What a season in the Champions League! We have seen all sorts of drama throughout the season and both semi-finals were extraordinary affairs, with both teams pulling off unbelievable comebacks against Barcelona and Ajax. However, the final is all about winning, and with two teams and managers who know each other so well it was inevitably a cagey affair. The early goal for Liverpool did not help, as they could rely on their excellent defense to see this game through.

Mauricio Pochettino had Harry Kane and Harry Winks back to fitness and chose to start both of them, opting for a 4-2-3-1 system that we predicted in the preview, most likely influenced by the successful second half in the last game between the two sides. Moussa Sissoko was Winks’ partner in the double pivot, Dele Alli was the number ten behind Kane, flanked by Heung-Min Son and Christian Eriksen. Jürgen Klopp fielded his accustomed 4-3-3 shape with his strongest lineup, with Georginio Wijnaldum replacing the injured Naby Keïta.

Before we got any sense of the initial approaches, Liverpool won a penalty after twenty seconds when Tottenham’s weak link was immediately questioned. Virgil van Dijk, who looked unplayable at the back throughout the game, powered off Kane for a fifty-fifty duel. Jordan Henderson flicked a through ball on to the path of Sadio Mané. The Senegalese had the most favorable individual matchup against Kieran Trippier, beat his man on the run to find himself inside the box and saw his cross deflect off Sissoko’s arm for a penalty kick.

Tottenham’s reaction was strong despite not translating into chances. Liverpool is arguably the least desired opponent in world football to play an expansive possession game against, and Tottenham showed their desire to play through Liverpool’s press immediately after the goal, and did it successfully. The usage of the double pivot 4-2-3-1 is one of the most frequently occurring formations in football. The two most defensive midfielders are called a ‘double pivot’. and the return of their deep-lying playmaker Winks who is excellent on the turn as well as in his decision making, allowed Tottenham to successfully build up and have a very good spell in the ten minutes after Liverpool’s opener. 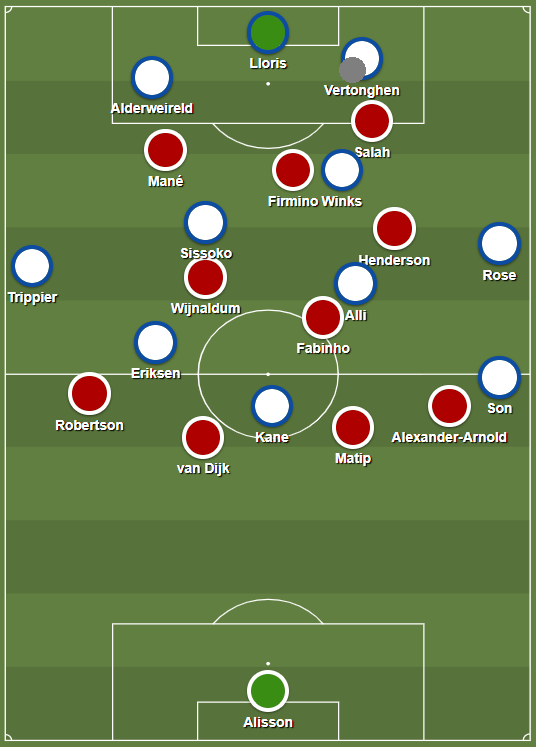 4th minute – Vertonghen in possession. Liverpool pressed all the way inside the Tottenham penalty box but through intelligent usage of the double pivot and the width of the fullbacks, Tottenham successfully played through the pressure. The sequence saw few passes between the 2-2 setup and ended with Alderweireld switching the ball to Rose, who progressed the ball into Liverpool half.

Tottenham’s problems were in decision making and precision in the final third. The one-third of the pitch that is closest to the opposition’s goal. Another brilliant buildup play came in the twentieth minute – Lloris played in Alderweireld from the goal kick, they interchanged passes with Trippier under pressure, Trippier played a lobbed pass to Kane, who held up well and passed to Eriksen. Eriksen played a cutting through ball to Son, who caught the defense two-versus-two with Alli supporting him, but he chose to dribble towards his man without success.

Moments later in the same sequence, after a few good passes in the middle, Eriksen had a great chance to play in Son in a very dangerous position, but he aimed his pass at Henderson. Tottenham often looked one good pass or shot away from goal, which makes all the plaudits on Liverpool’s “pragmatic” approach questionable and potentially outcome biased. The real plaudits, though, have to go to Liverpool’s defenders who made sure those final passes and shots were as difficult as possible to make. 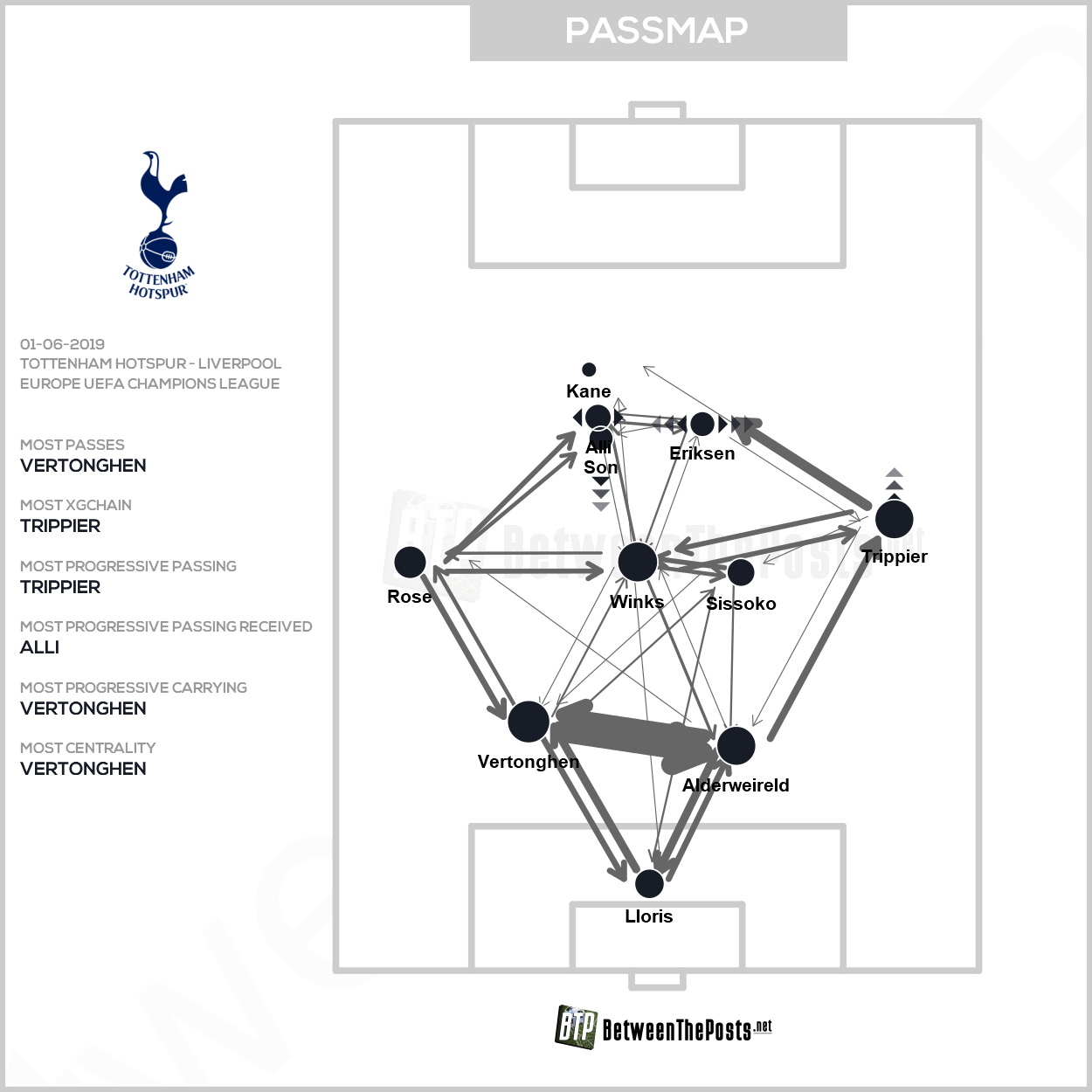 Liverpool did not offer anything going forward until James Milner’s second half chance. They sat behind the ball in a medium block, A medium block refers to a team that retreats in their own half out of possession, generally only disrupting their opponents some way into their own half. tried to deny space to Tottenham’s attackers and looked for hopeful long balls mainly towards Mané to create chances. Their only promising moments came through their fullbacks in transitions with help from Tottenham attackers’ tendency to shift towards the ball side in attack.

Trent Alexander-Arnold and Andy Robertson both had two decent tries from distance after being allowed the space to dribble forward in transition. Liverpool had a highly disappointing game in offense, with a measly 0.14 expected goals The amount of goals a team is expected to score based on the quality of the shots they take. in open play, and one would expect more especially against a Tottenham side that does not have the best defensive record and had to take risks chasing the game. 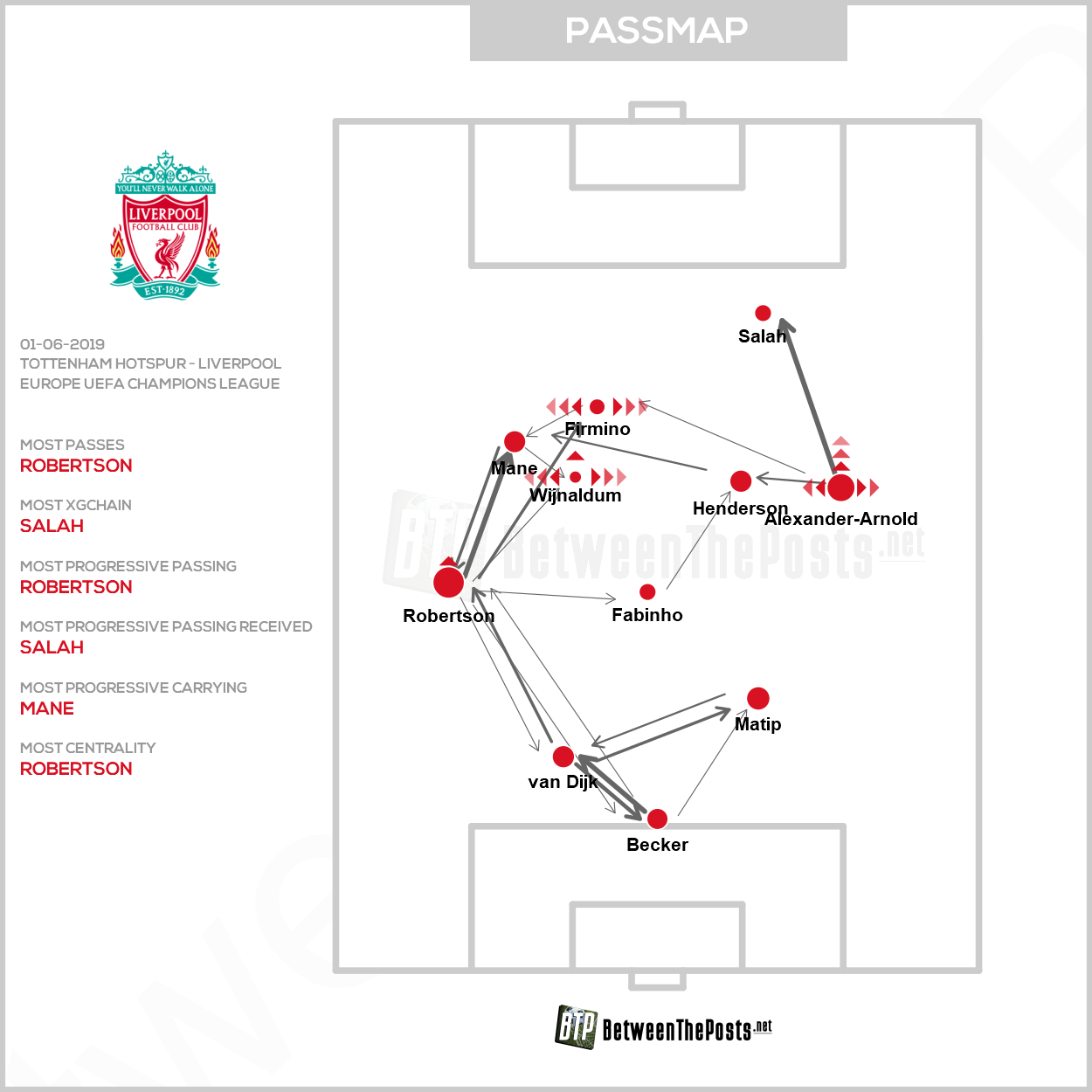 Tottenham’s biggest problem was in the final third – Kane, who usually gets heavily involved by dropping towards the ball with other attackers trying to run beyond him, had only eleven touches in the first half. Kane was the right choice as the player profile for such a game that Tottenham dominated possession, but despite a few neat linkups he was nowhere near his best. Tottenham’s front four simply did not have good games, which is probably why they lost the final.

The fact that Pochettino did not change his formation for the entire game until Llorente’s late introduction was a clear indication that he was happy with the balance of play. He made his first tweak by switching Son to the right flank with Eriksen moving to number ten and Alli to the left, around fortieth minute.

He kept this setup going into the second half, with clear directions to Trippier to push further forward and Son to move inside. This resulted in a much better positioning by Tottenham in Liverpool’s half – Son often popped up as the extra player in zone 14 Zone 14 is a coaching term that refers to the part of the pitch just in front of the opponent’s box. Completing passes in this area of the pitch is a sign of territorial dominance and is usually associated with a good performance. and had few clear sights on goal, with a few promising dribbles and a decent shot on goal. Son is a better individual threat on the ball than Alli who previously occupied that possession. Alli’s presence in the box and Son’s presence next to Eriksen increased the threat that Tottenham posed.

Klopp made the first two substitutions, with Origi coming in for Firmino and Milner for Wijnaldum, both being straight swaps without changing the system. Pochettino first introduced Lucas Moura for Winks in the 66th minute, moved him behind Kane and pushed Eriksen back into the deep-lying playmaker role, increased the direct goal scoring threat around Kane. The latter two changes were Dier for Sissoko in a straight swap and Llorente for Alli to increase physical presence in the box in the last ten minutes. 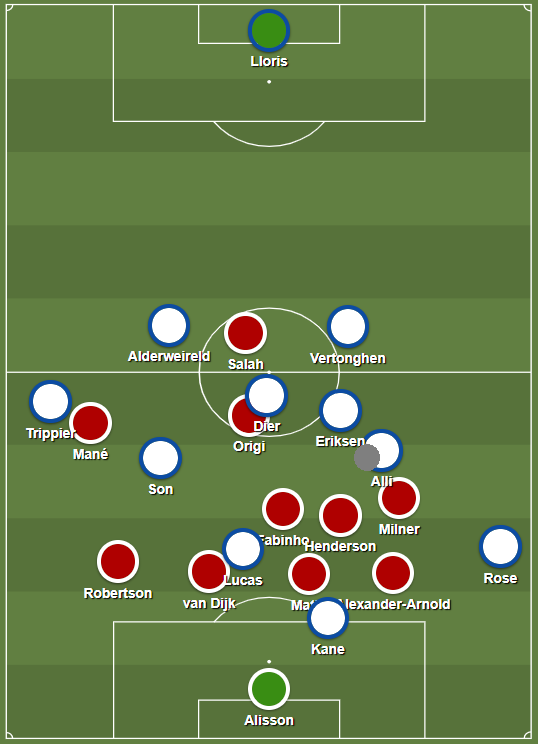 80th minute – Alli in possession. Helped by Klopp’s 4-4-1-1 decision in the late stage, space opens up for Son here as Mané is concerned with Trippier and the double pivot gets drawn to the ball side. Alisson saved Son’s long range effort.

After a dangerous move in the 75th minute, Klopp switched into a 4-4-1-1 formation by moving Milner to the right midfield and having Origi mark Eriksen behind Salah. This was again questionable, since the main threat Tottenham was posing was through Lucas and Son positioned right behind Kane, and now Liverpool had one less player there. Eventually, thanks to an Origi goal after a corner kick rebound, Liverpool ran away with the game and became the winners of the 2018-19 Champions League. 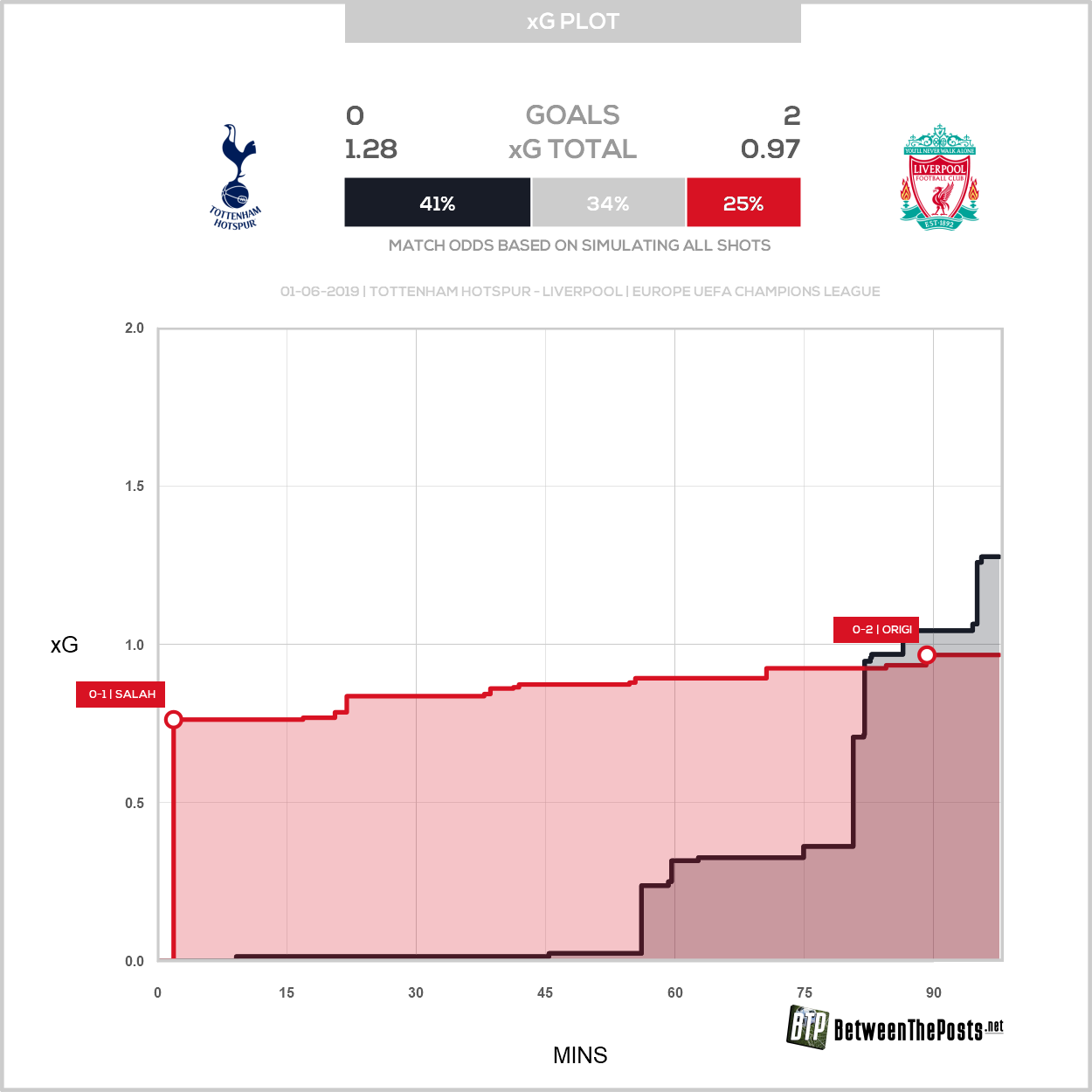 Klopp is taking the plaudits for “sacrificing the game” for a pragmatic and hard-fought victory. After all, winning was all that matters in this game. But was this really the best method to get that win?

Tottenham got handed a lot of initiative, used that initiative very well to play through Liverpool’s pressure, got the ball to the dangerous areas successfully, got into promising positions but they were often one good pass or shot away from scoring. Had one of their successful ball progressions went on to become a goal, would Klopp still have got all this praise with the same exact data we have in our hands?

Liverpool created next to nothing for the entire game and got the result with a mixture of good defending and a bad day for Tottenham’s attackers. But this was, tactically, the best game we have seen Tottenham play in a very long time, and the same can hardly be said of Liverpool who really should have balanced out the game and threatened Tottenham much more than they did.

Pochettino deserves immense credit for the tactical work he has done to build up through Liverpool’s pressure and he almost played a perfect game from a tactical perspective – the expected goals figure of 1.28 fails to tell the whole story as it does not contain plenty of promising situations that did not turn into shots. It just did not come through in the final third.

Having said all that, it does not take anything away from the spectacular team that Klopp’s Liverpool is. Their performance throughout the past two seasons definitely deserved a major trophy and in this light it feels fitting that they emerged as winners in this final.

This will grant you access to all our coverage of Europe’s top five leagues, the MLS, the Brasileiro and cup competitions like the Champions League, Europa League, Copa Libertadores, Copa America and many more. 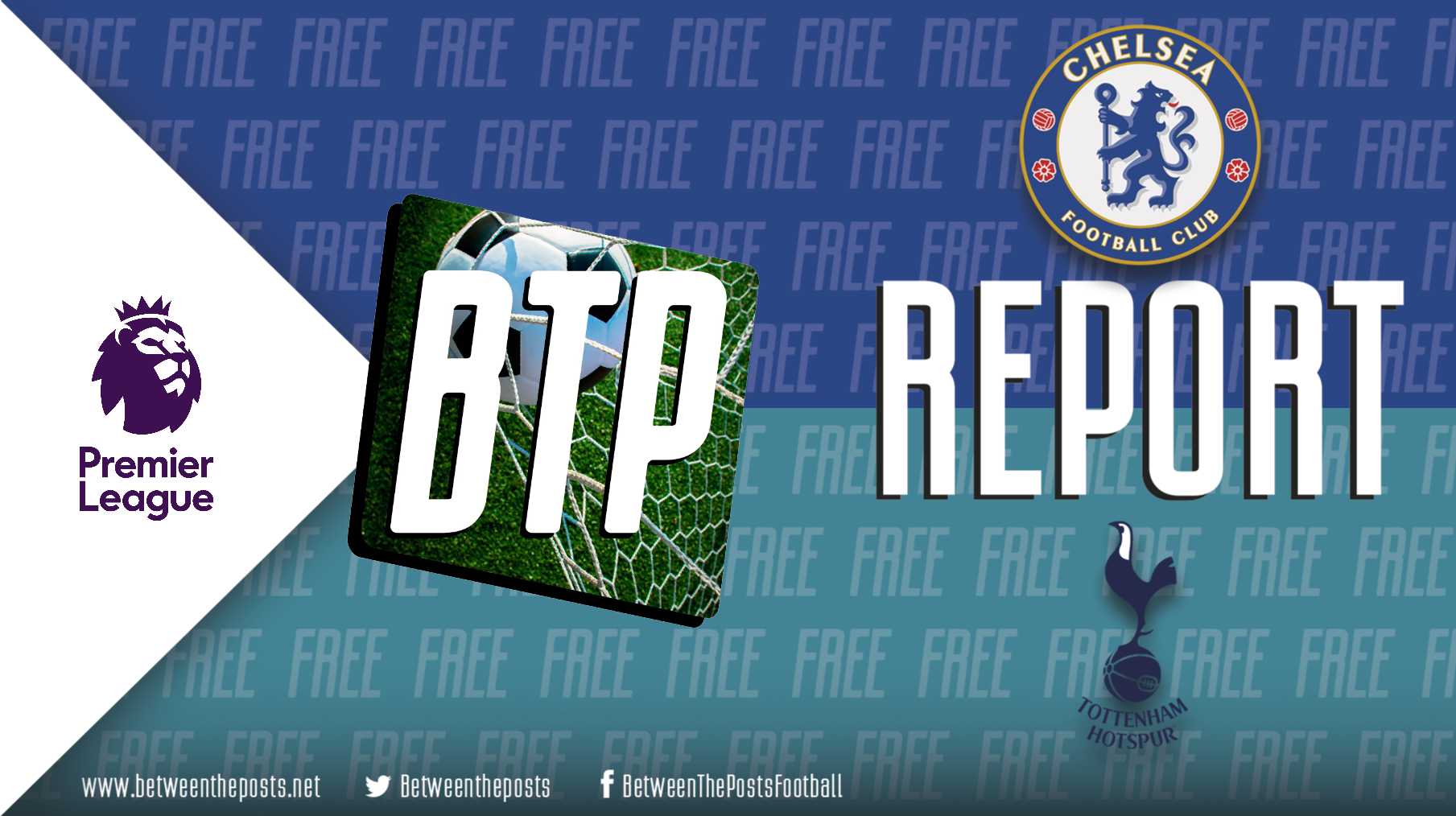 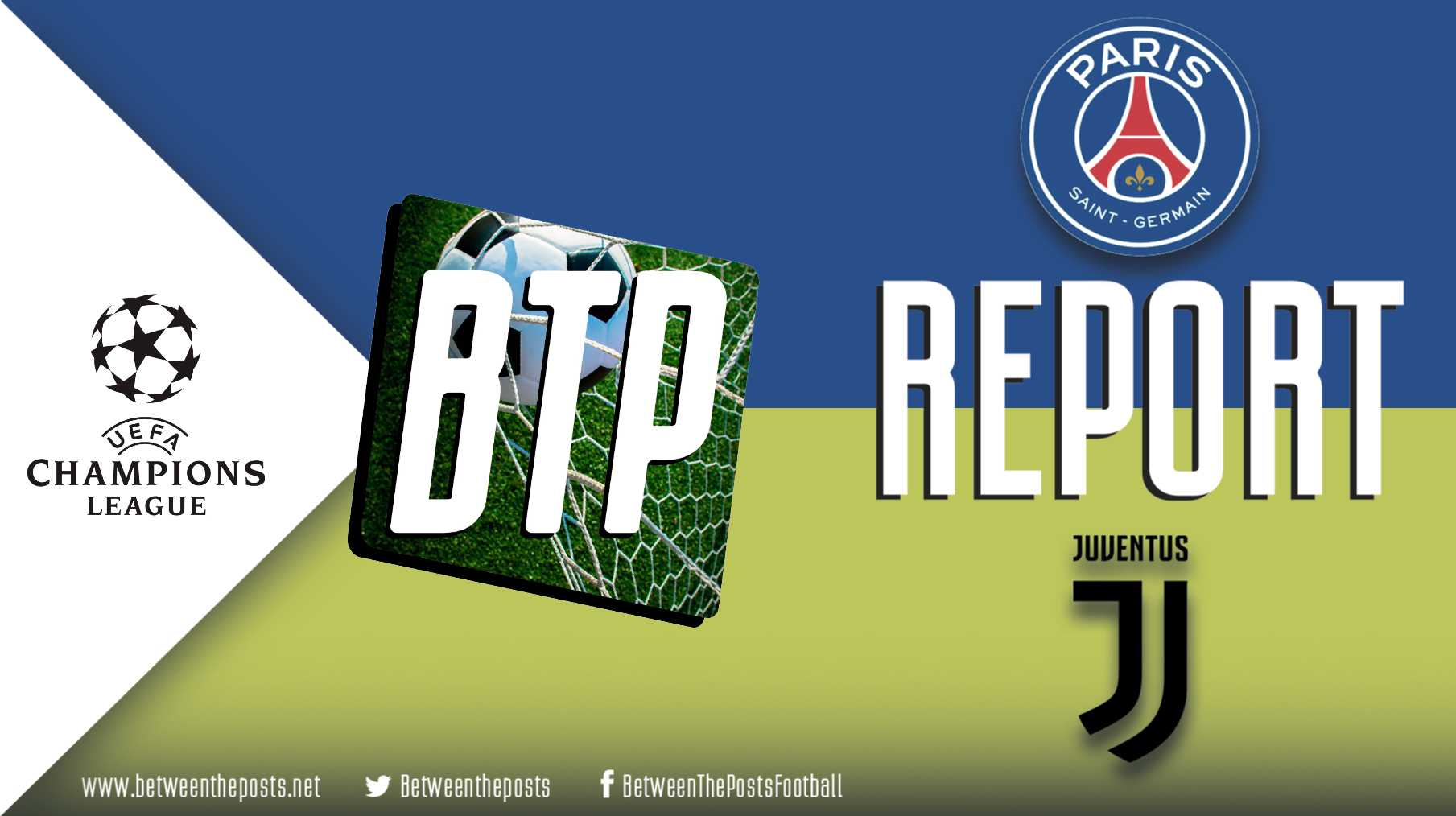