Manchester City were nowhere near their accustomed attacking flair as Pep Guardiola’s choice of a double pivot led to a lot of unambitious possession play. Tottenham successfully stifled City’s midfield, and despite losing their talisman, they managed to capitalize on Manchester City’s weak link and get an important first leg victory.

Pep Guardiola’s choice of a 4-2-3-1 formation is the main talking point of this game, since everyone is pointing out Guardiola’s Champions League shortcomings – most notably last year’s trouncing at Anfield at the same stage of the tournament, with the same choice of formation. Guardiola also chose to play this formation at Anfield earlier this year in a 0-0 league draw, in a game that both sides were happy with a draw. It was the same case here for Guardiola; he came for a draw.

Tottenham had their best team available and Mauricio Pochettino also chose to play with a 4-2-3-1 formation, with Dele Alli behind Harry Kane, flanked by Christian Eriksen on the right and Heung-Min Son on the left. Manchester City replicated the squad that started the 0-0 draw at Anfield with Riyad Mahrez preferred over Leroy Sané, but since Bernardo Silva and Benjamin Mendy were not fit enough, Guardiola reverted to İlkay Gündoğan and Fabian Delph to replace them.

The frame we saw the most during the game was Manchester City center-backs having the ball in their own half, and Tottenham’s disciplined compact medium block, A medium block refers to a team that retreats in their own half out of possession, generally only disrupting their opponents some way into their own half. closing their passing options with man to man orientations. Alli, same way he was used to counter Chelsea’s Jorginho, was tasked with taking Fernandinho out of the game. He did so successfully, limiting the Brazilian to only sixteen passes in the first half, a figure way below his usual numbers.

Guardiola knew this would happen – one of the main reasons he plays double pivot in these games is because he knows his opponent will be aggressive enough to mark Fernandinho and press high to stifle their buildup. Gündoğan provided the second option in the same zone in front of the defense, but Pochettino chose to push his right sided midfielder – Sissoko for the majority of the game – high on him to deny him space, and a mixture of this and Kane’s cover shadow When a player is positioning himself between the opponent that has possession of the ball and another opponent, he is blocking the passing lane. When applied the right way, his ‘shadow’ is effectively taking the opponent in his back out of the game, because the pass can not be played. did enough to deny easy access to Gündoğan. 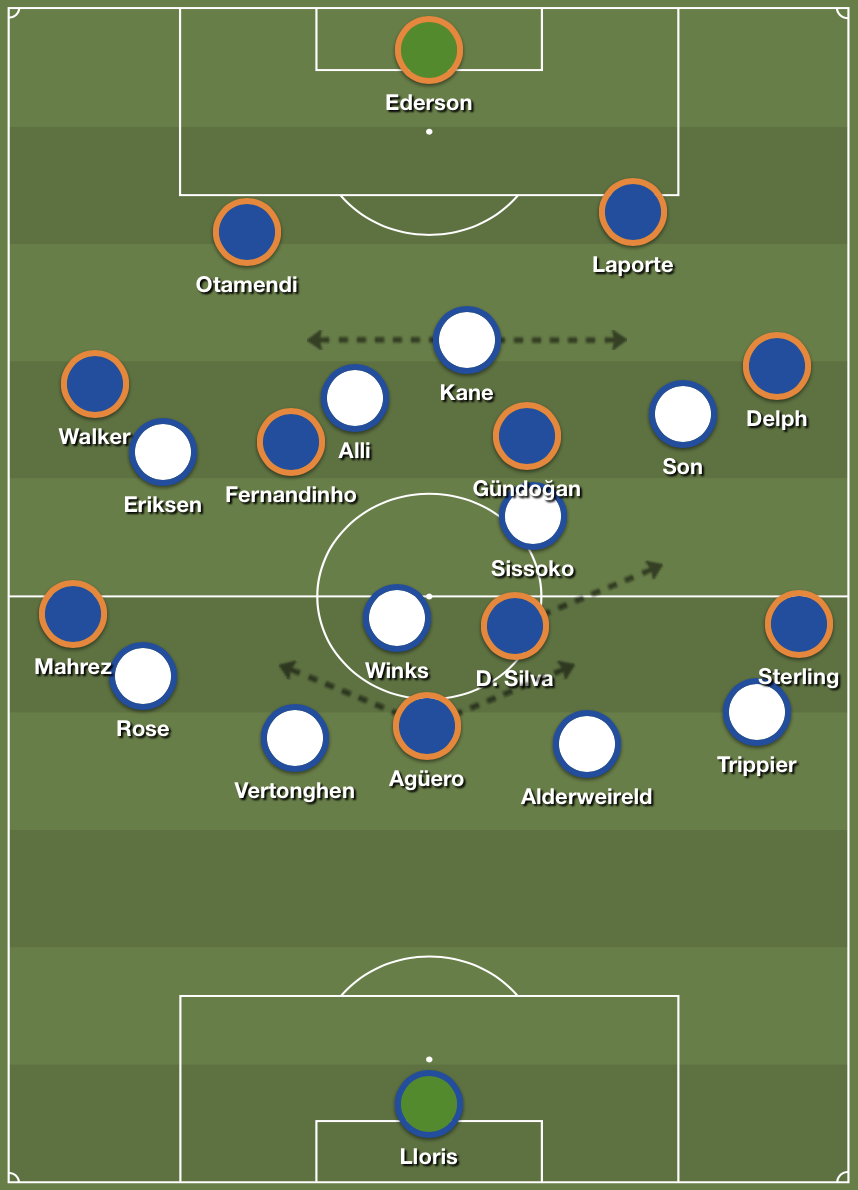 Pochettino played all sorts of different formations this season and Guardiola also likes to change things for big games. Therefore it is fair to say that both managers did not know what shape to expect from their opponent. The first fifteen minutes saw especially Pochettino reading the situations and adapting his side.

In the opening stage, Fabian Delph was occasionally dropping into midfield during buildup, with Gündoğan moving towards the left into the vacated space. Eriksen followed Delph tightly, but this movement was creating the space that City needed to progress the ball. City started the game well, progressing the ball successfully and they won the penalty in the tenth minute in a move that Guardiola would have been delighted with. They got Gündoğan on the ball after a patient buildup, he played a swift one-two with Silva, passed wide to Sterling, who took on Trippier to dribble inside and take his shot to win the penalty.

It should be considered the first clear chance of the game and probably the only one for Manchester City, as Mahrez was wide open on the right for a simple finish. Hugo Lloris saved the resulting penalty to deny an extremely important away goal.

Shortly after the missed penalty, Pochettino switched Son to the right and Eriksen to the left. This made sense in multiple aspects – Delph is not a good defender and his positional weakness as well as one-on-one defending has been exploited many times by City’s opponents. Having a direct threat on him in Son, who is one of the most dangerous wide forwards in Europe, made sense compared to having Eriksen there who would have spent the majority of the game cutting in between the lines.

This would also mean Sterling would have to do more running to help out, which would limit his effect going forward. As evidence to how much harder he had to work off the ball, he made an important tackle on Son in 23rd minute in his own box, and then fouled Son in a dangerous spot right outside the box in 41st minute to stop his run, following a switch from Kane to Trippier. 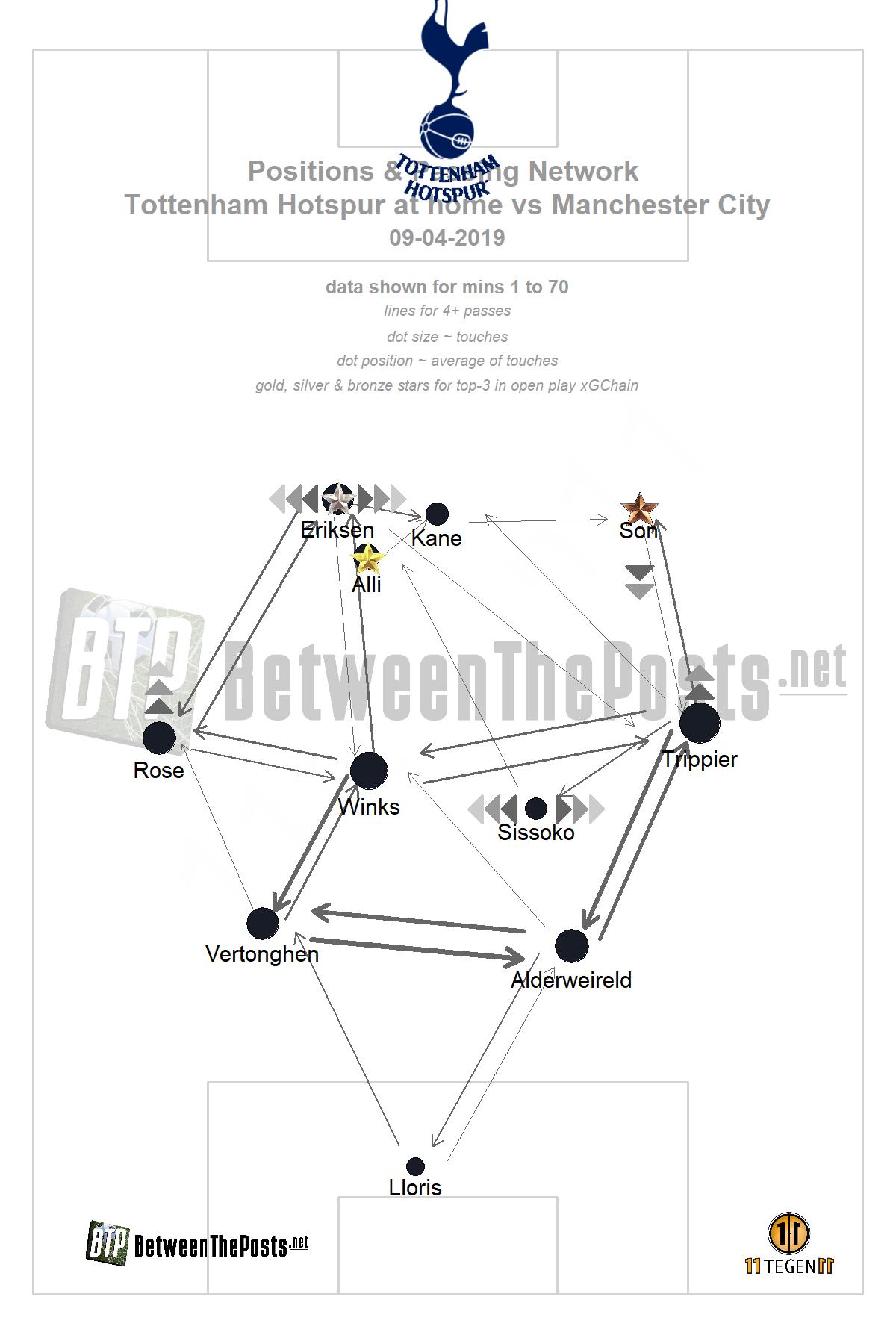 Tottenham’s clear 4-2-3-1 shape with Son in a wide right role and Eriksen with more positional freedom from the left.

Tottenham immediately looked better after this change. Delph was not coming inside anymore in possession not to risk Son in a possible transition, which limited the movement in the middle of the pitch for City. This led to unambitious possession play in the back between center-backs and Ederson, Tottenham used triggers to press when the ball was passed wider. City often had to play it long and concede possession.

Tottenham’s switches to the right

Tottenham had a clear plan in what they wanted to do with the ball. In their buildup they mostly played from the left with Vertonghen and Rose often looking for direct balls between the lines towards Eriksen, Alli or Kane. The goal was to eventually get the ball to Kane or Eriksen, who both often looked for a switch to the right side where Son was pinning Delph narrow towards the box and Trippier was overlapping. Then Kane and Alli would move inside the box, looking for a cross from Trippier. The duo of Kane and Eriksen switched the ball from the left to the right six times during first half, almost all occasions looking dangerous. 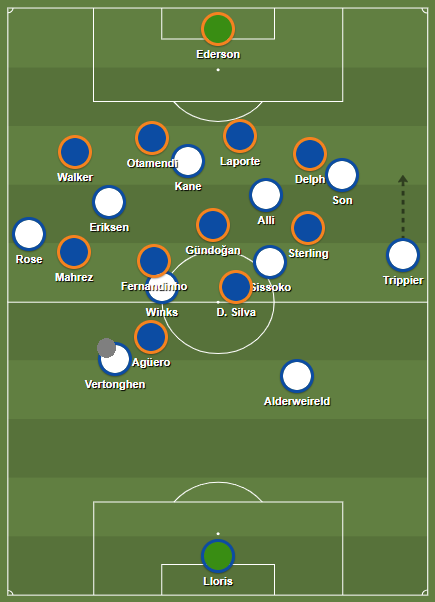 34th minute – Vertonghen in possession. He finds Eriksen between the lines, who after a quick exchange with Rose switches to the right to overlapping Trippier. Kane and Alli move inside the box, Trippier’s cross finds Kane but the he does not hit it cleanly.

Tottenham’s plan was effective and it played into their strengths and City’s weaknesses, but their execution – apart from the brilliant quality of switches – was poor. They often looked one good pass or cross away from scoring in this first half, and often made unforced passing errors in other areas to concede possession. Trippier was not at his best as well in terms of crossing. They could convert this successful half into more shots and possibly goals, but eventually had to settle for a 0-0 draw at half-time without creating a clear-cut chance, but also not conceding one barring the penalty incident – City barely came anywhere near Tottenham’s box after that. 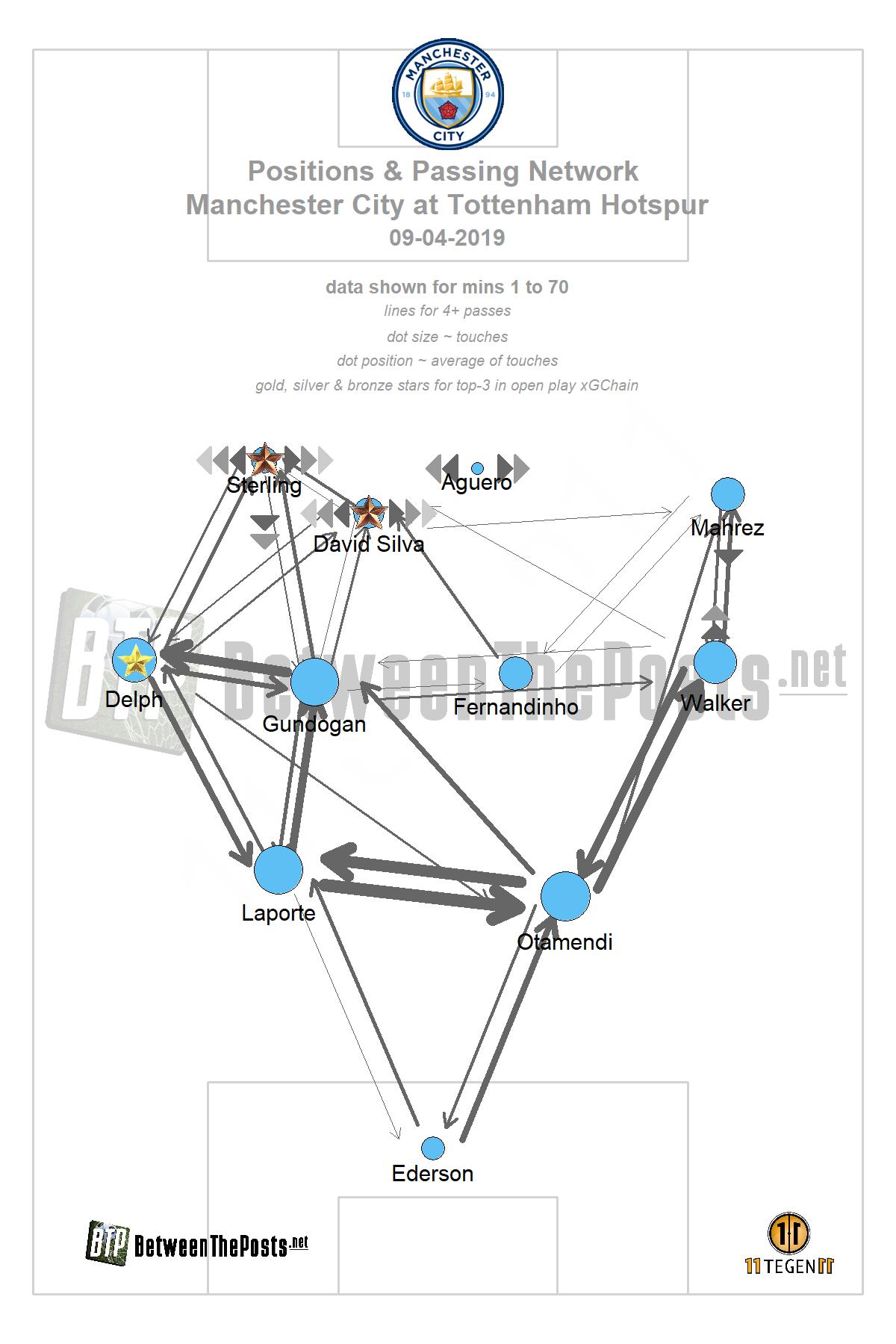 Plenty of sterile possession and a much subdued role for Fernandinho.

Kane a big blow, but Son capitalizes on the weak link

Neither manager changed things at half-time, which shows Pochettino was happy with his plan and Guardiola was happy with a draw. City had a decent chance right at the beginning after Gündoğan and Silva probably combined successfully for the first time since the penalty incident to break Tottenham lines, switched to Sterling on the left but his shot was saved by Lloris. After this, it was pretty much the same dynamics until Kane’s injury in the 55th minute, who was replaced by Lucas Moura.

Kane’s absence meant Tottenham did not have a target for direct balls from buildup, one less source of the effective switches to the right, and one less presence in the box. Tottenham kept the same strategy off the ball, but their effectiveness and threat in possession decreased, which eventually gave City more time on the ball to grow into the game. However, Guardiola chose not to make any changes in his approach, and the only change he made was Gabriel Jesus for Agüero in a straight swap. Despite having more of the ball in Tottenham’s half, City still did not look threatening.

At this level, football is a game of fine margins. Despite having less threat after Kane’s absence, Tottenham still had their most dangerous man on City’s weakest. After winning the rebound of a Lloris long ball and a few passes, Eriksen found space in the middle to pick out Son who ran outside of Delph. Delph was positioned unnecessarily narrow and despite Son’s initial poor touch, he recovered, cut inside without interference and hit it low with his left foot to give Tottenham this crucial victory. 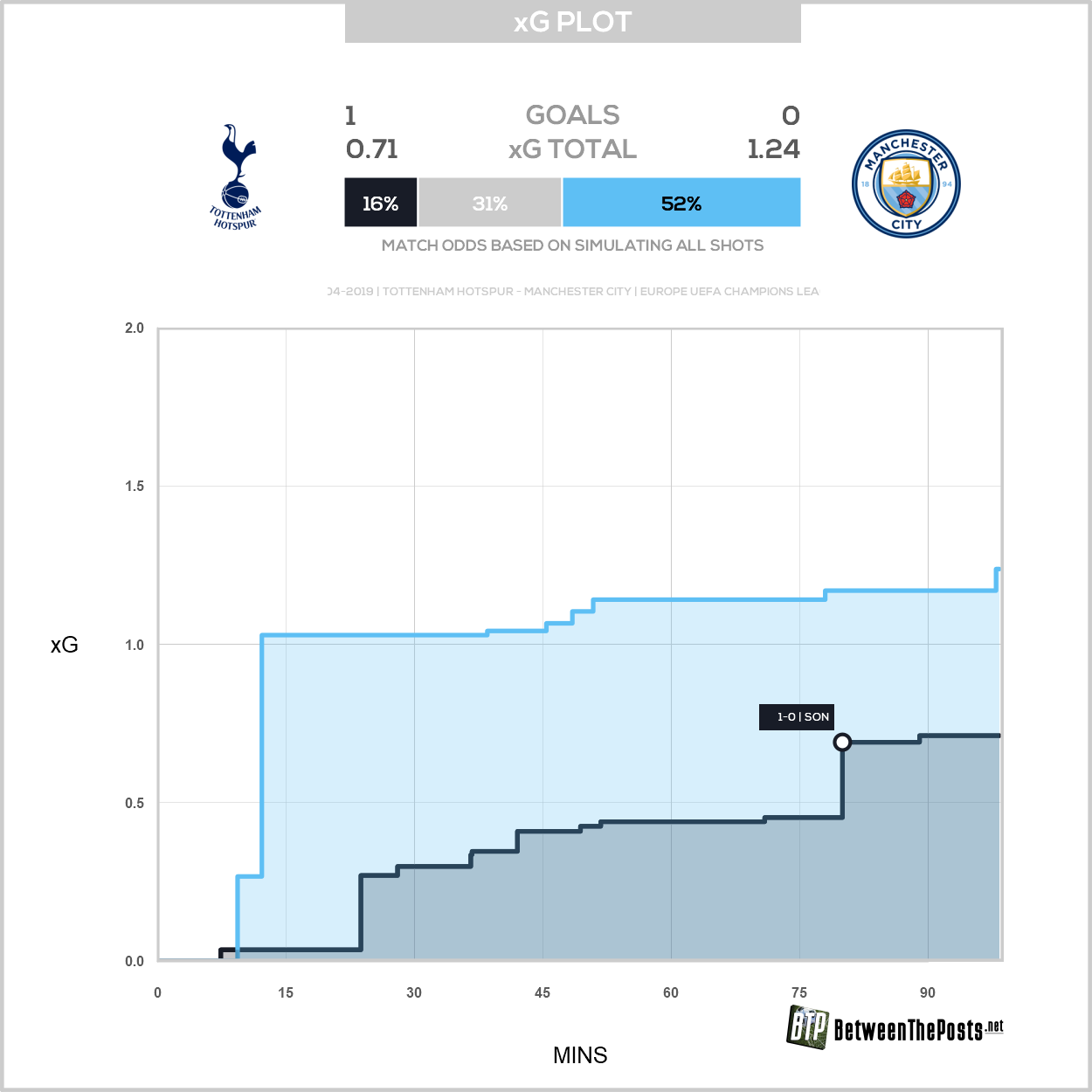 Guardiola’s tinkering in big Champions League ties once again haunted him, as his side looked nowhere near their usual self against Tottenham. Tottenham is a team that has weaknesses, came into this game in poor form and Guardiola possibly showed their opponent too much respect. He wanted numbers in buildup and numbers in defense, which resulted in a lot of unambitious possession play in the back and lack of players in between Tottenham’s lines. Tottenham, despite not being at their best in possession as well, looked better and more threatening than City throughout until Kane’s departure and managed to come away with a win thanks to Son exploiting the weak link. Had Guardiola used Sané earlier than 89th minute, maybe City could also have exploited Trippier’s defensive vulnerabilities in a similar way. City needed direct paths to goal and the game would have suited Sané a lot.

On the other hand, Pochettino gave a really good test of his reactive coaching ability by having an effective plan offensively and defensively against a very strong Manchester City side who came into this game with fourteen straight wins in all competitions. His reading of the game situation to switch Son and Eriksen also played a crucial part in gaining control in the game, as well as the decision to keep Son on the right when Lucas Moura entered. However, the real test will be protecting the lead in the Etihad Stadium and coming up with a plan without Harry Kane. 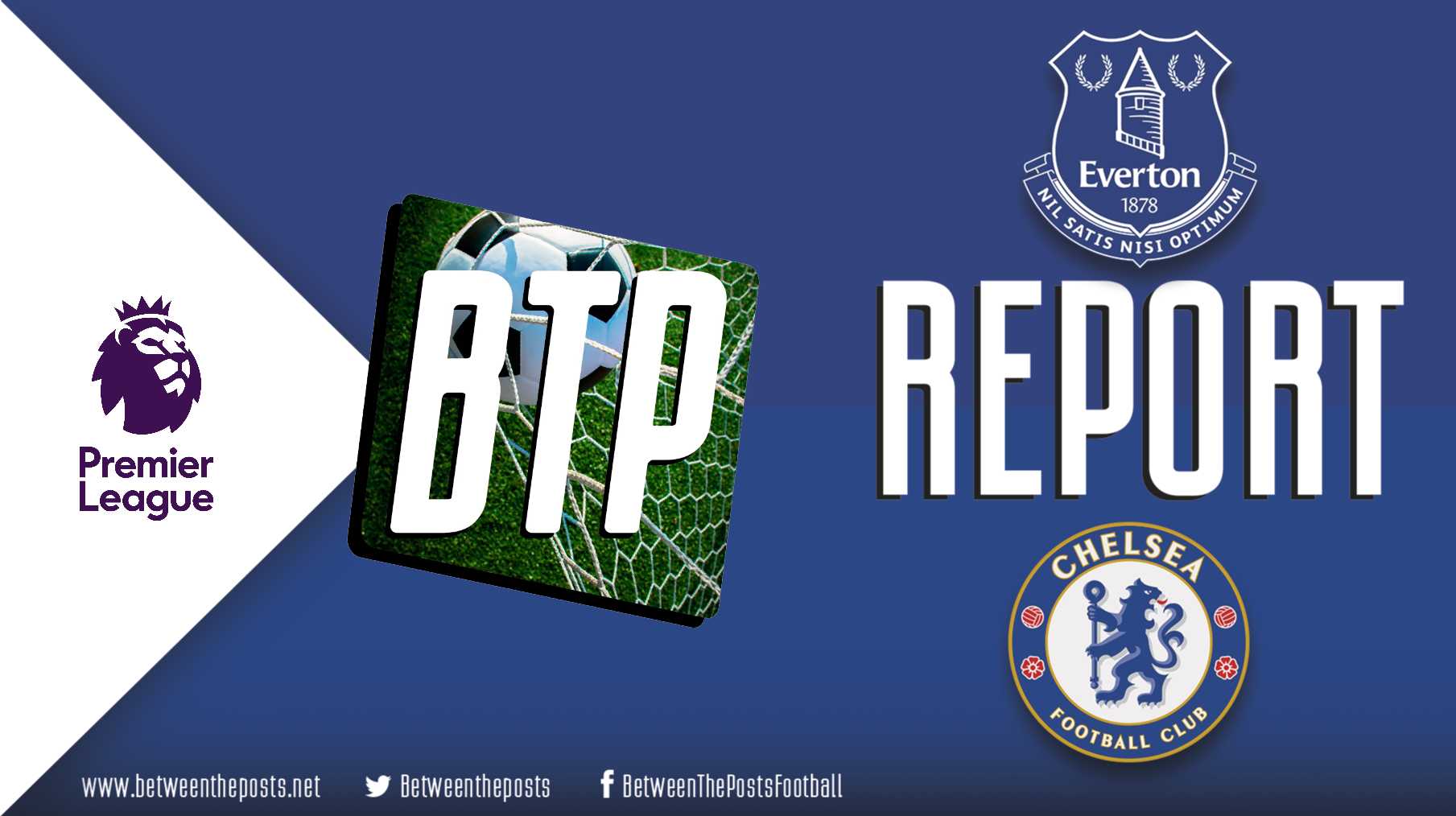 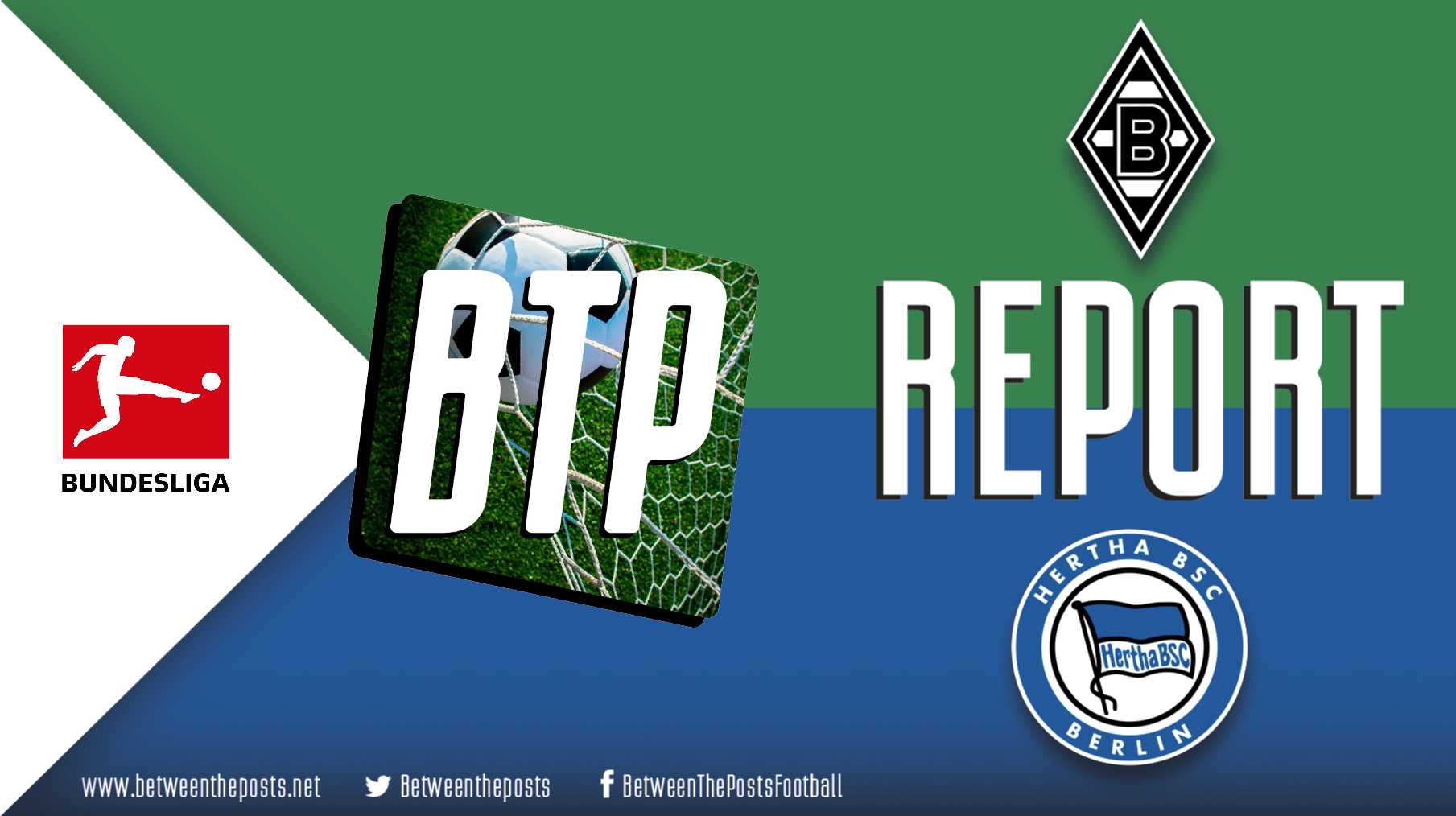