In a crucial fixture for European places, Tottenham Hotspur conspired in their new craft, as they comfortably beat a scattered West Ham United. Connections through the lines were pivotal in playing through the visitors, before a classic partnership provided the finishing touches.

London matchups aren’t always feisty, but Spurs and West Ham have been one of the more fruitful matches in recent seasons. With the Premier League season reaching its final stretch, two Champions League outsiders clashing will always claim the attention of the masses.

Tottenham have jumped into inconsistency, having found success when teams press higher against them. This is where vintage Conte principles come into play; battering both Leeds and Everton saw trademark goals, usually seen by clubs that are managed by the highly successful Italian coach. But when up against more reserved and compact opposition, Spurs can play themselves into problems.

Perhaps no team has found more success, by their conservatism, than West Ham. Though their position amongst the top four has slipped since the turn of the year, it’s their passivity that has seen Moyes’s finest work to date, by knocking Sevilla out of the Europa League. West Ham can fight for a Champions League spot on two fronts, but creating distance on a team who they are level on points with would be a significant factor in their final destination.

It has come as no surprise that Conte has rarely rotated amongst his squad, even with games in midweek. Spurs fielded the same team that beat Brighton in midweek, set up in the 3-4-2-1 formation.

Moyes made two changes from a historic night against Sevilla. Łukasz Fabiański returned between the posts, in place of cup goalkeeper Alphonse Areola. The only other change, in their 4-2-3-1 system, came on the left of the attack, as Pablo Fornals was replaced by Arthur Masuaku.

Moyes is renowned more for his gritty defensive blocks than allowing his team’s to be more flexible in possession: a trait that is ushered in once he has deemed his side stable enough. The early stages saw both West Ham and Spurs circulate the ball in defensive and middle thirds, with the opposition being more passive and rarely engaging high in the final third. Though this pattern stuck with the game, it was West Ham who controlled more of the ball early on; as they built in a mixture between a 3-4-2-1 and their usual 4-2-3-1 system.

The back three saw Aaron Cresswell tucked in the last line, with Arthur Masuaku and Ben Johnson positioned as wingbacks. This could transition into a back four, as both Cresswell and Masuaku pushed ahead and Manuel Lanzini moved more central as the number ten. West Ham’s shape could also be adapted by the double pivots’ movements, although both varied, Declan Rice came closer to the ball – even slotting between Cresswell and Craig Dawson at times, whilst Tomáš Souček could move higher and wider to support Saïd Benrahma. 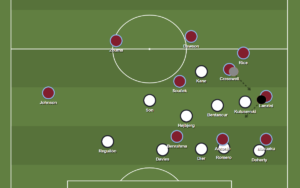 7th minute: Example of West Ham problems on the ball. Though positions were adjustable, West Ham could not stop the Tottenham block building compactness down the channels. Lanzini’s pass into Antonio (Black ball, second pass) was intercepted and turned over by Spurs.

Though the visitors’ blueprint was adjustable, Moyes’s team was u-shaped in possession and struggled to move through Tottenham’s 5-2-3/5-4-1 medium block. There was a heavy reliance on variations between Rice and Lanzini, on the left side of the field, to create openings – however, these were often played in front of Dejan Kulusevski and Rodrigo Bentancur, with Masuaku and Michail Antonio occupied by Matt Doherty and Cristian Romero.

With West Ham lopsided, this saw their passing game become pretty stale from the start, with very little access behind Tottenham’s midfielders or rotations that could draw players out of their blocks. Although Benhrama could move onto the left side to support, Spurs were not stretched and West Ham was congested with players wanting the ball to feet, rather than direct runners in behind.

Matching a 3-4-3/3-4-2-1 formation can reap great rewards, something that Conte knows too well after every team used this the season after his Chelsea team won the league. Nevertheless, you run the risk of leaving players isolated when trying to build from the back, because of the ability for your opponents to go man-to-man when they press.

Eight minutes in, Johnson was forced backwards and passed back to his goalkeeper. Moyes’s team attempted to move the ball on the left but were matched by one of the more aggressive pressing moments of the game. Masuaku was pocketed by Doherty, as Harry Kane had the space to drive between Cresswell and Dawson. His target was Heung-Min Son but was turned in by Kurt Zouma. 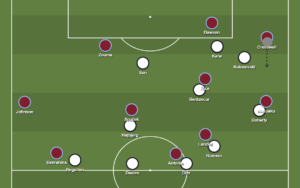 West Ham’s varied approach was also reflected in defensive phases. When higher up, West Ham could be in a 3-4-3 shape, but when positioned in a medium block, their 5-4-1 shape could also bounce between a 4-4-2 formation: with Masuaku further ahead and Cresswell covering, or a 5-3-2 formation: with the ball sided winger on the same line as Antonio.

When off the ball, the visitors were scattered left passing lanes open through the center of the field. As Tottenham gained more control of the ball, more of West Ham’s defensive issues began to surface and Spurs started to combine between the lines.

Tottenham’s success can be found in their midfielders’ movements. Pierre-Emile Højbjerg and Bentancur could drop closer towards the center-backs, which took a West Ham midfielder with them and opened a route straight towards one of the forwards. Routes were also created by the width provided by Cristian Romero and Ben Davies. Both wide center-backs had phases where they received the ball on the touchline, whilst Bentancur and Højbjerg made direct movements from behind to a position in front of them.

As the game progressed into Spurs control, Harry Kane’s influence grew. Spurs were able to access their playmaking striker by several different routes. An up-back-and-through combination was accessible by the vertical positioning from their double pivot, seen in a move sixteen minutes in, as Kane nearly found a charging Sergio Reguilón far side, with a driven ball across the box. As well as these combinations, in-to-out runs from Son could also open space for Kane to drop into and receive. 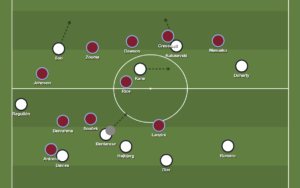 23rd minute: Buildup to Tottenham’s second goal. Lane opened by Kane’s lateral movement away from the ball and center-backs pinned back by direct runs.

West Ham was heavily passive but had no solution to stopping Kane behind their midfield line and were punished again before the half-hour mark. Bentancur found Kane’s lateral run, away from the ball, able to turn in space with Kulusevski and Son pinning West Ham’s center-backs deep. Kane would play through, a change of pace beating Zouma once he had gained control and an excellent finish into the roof of the net from Son.

From this point onwards, Spurs continued to control the ball until the end of the second half. They circulated the ball more to the right side from deep and although their shot count didn’t explode into life, they were still able to flow the ball between West Ham lines.

Nonetheless, West Ham was able to respond from a route they know best. A direct channel pass from Cresswell saw Doherty concede a cheap corner, one which saw Dawson’s header find Benrahma perfectly at the back post. A well-executed side volley put West Ham back in the running.

Tottenham started the second half as they had ended the first. Though comfortable in possession, the real danger produced from Spurs unsurprisingly came on the transition, with Rice left isolated on a couple of occasions when the hosts turned possession over. One of these moments saw the same combination of Bentancur, Son and Kane combine again, though Kane’s shot on the left side was well saved by Fabiański.

Moyes needed to change the course of the game, something which his double substitution would help facilitate for a brief period. Masuaku and Antonio were replaced by Pablo Fornals and Andriy Yarmolenko, a change into the 4-1-4-1 formation, that had been so effective against Sevilla.

The double sub saw Lanzini move into a more central role and a lot more variations between the Argentine, Rice and Souček. It was the movements of the midfielders that resulted in a cleaner buildup from West Ham, sometimes Lanzini would be on the same line as either midfielder, or a single pivot could be created by any of the three. It was a combination between Rice and Fornals that created one of the few shots made, Fornals was able to move infield onto his right foot and find Yarmolenko’s curved run behind Romero, but the acute angle was too narrow to test Hugo Lloris. 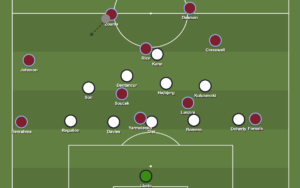 West Ham problems in the 4-1-4-1 formation. Conservative full-backs didn’t draw out Tottenham wingers, whilst connections between the wingers and center-midfielders were difficult to make.

Although their movement was better, this structure was still suboptimal. Both Fornals and Benrahma sat on the outside of the wingbacks, whilst Cresswell and Johnson didn’t offer a third man run or contribute too much to West Ham’s control of the ball. Yarmolenko’s wide attempt came on the hour mark, the final shot the visitors could muster.

Possession spells were still exchanged between the two, but Tottenham had both asserted more control and generated the chances worthy enough to kill the game off. Spurs have always packed a punch on the counterattack and broken West Ham play could be followed by Conte’s team charging from the center, before moving the ball to an overlapping option on the left.

Nevertheless, the hosts were still able to flow the ball through the lines as the West Ham block was still open. In the middle third, their shape resembled a 4-3-2-1 shape, with the center-midfielders higher than both Fornals and Benrahma, although the wingers remained wider. Such openness saw Kulusevski more engaged from deep, as well as Doherty who could drift into central positions to provide a passing lane.

Tottenham experienced their most dominant phases in the final twenty minutes, as well as racking up the shot count. Kane almost concluded a fantastic passing move, as Spurs continued to recycle the ball around the box before a delicate dink from Højbjerg put Kane clean through. Though Kane is so reliable in these areas, his shot didn’t trouble the goalkeeper.

Moyes made one last switch, as Nikola Vlašić replaced Manuel Lanzini with six minutes left, but Spurs finished the game just a few moments later. Both center-backs challenged Kane off a direct ball from Lloris, which took both defenders out of the game and Son sprinting through on the flick on. Son cooly slid the ball home, to seal huge points.

A massive win for Tottenham and their Champions League intentions. Antics may always come with Conte, but this performance resembled Spurs beginning to follow the full proposal, rather than just showing the occasional glimpses.

Defeat does not take away West Ham’s monumental achievements in midweek, but it still leaves a sour taste. With that in mind, the axis can switch towards their late Europa League run, with Moyes’s team now six points behind Arsenal, who have two games in hand.