France had the majority of possession, yet ended the game without a shot on target. This was the result of a weak possession game which Turkey’s disciplined defense found easy to repel. As well as not being able to break Turkey down, France were punished at the other end from a set piece and defensive errors as Turkey were two goals up by half-time. Second half substitutes for France improved them somewhat, but Turkey sat deep and soaked up pressure to see the game out.

Turkey hosted France in the European Championship Qualifiers, with the teams level at the top of Group H having won their first two qualifying games. Turkey lined up in a 4-3-3 formation, but with some of the more known names such as Oğuzhan Özyakup, Hakan Çalhanoğlu and Cenk Tosun missing from the starting lineup.

Meanwhile France reverted to a similar blueprint to the one with which helped them become World Cup winners last year. They made two changes from the World Cup winning starting eleven in the form of Moussa Sissoko, who took up the central midfield role usually filled by the injured N’Golo Kanté in their 4-2-3-1 formation. Furthermore, Lucas Digne was deployed at left back as he was in France’s previous game against Bolivia, due to the injury to usual left back Lucas Hernández. 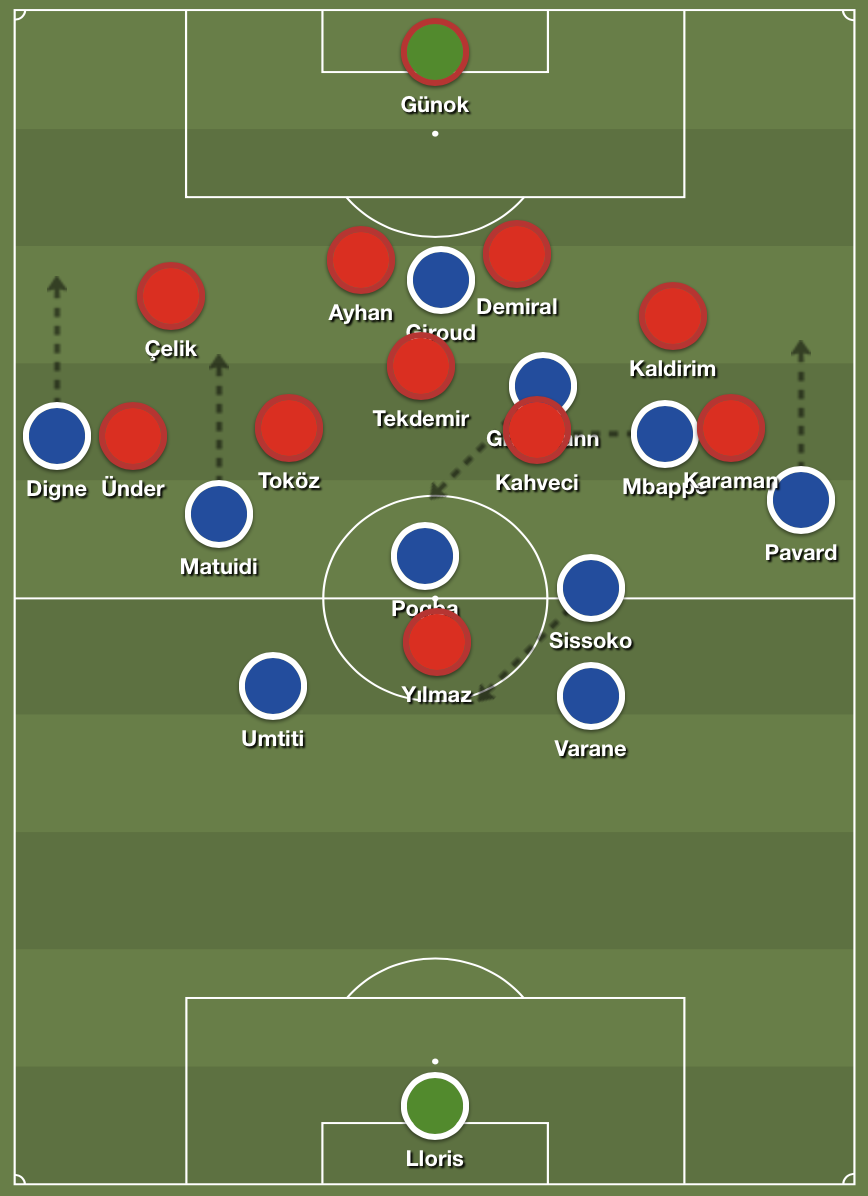 For France, Moussa Sissoko would often be the deepest midfielder in possession, dropping alongside the center-backs, while Paul Pogba positioned himself in the next line, operating largely in defensive midfield positions, picking the ball up from the center-backs.

The role of Blaise Matuidi was relatively redundant against the deep defending of Turkey. He popped up in the left halfspace If you divide the field in five vertical lanes, the halfspaces are the lanes that are not on the wing and not in the center. Because there is no touchline like on the wing, players have freedom to go everywhere. But this zone often is not as well-defended as the very center. This makes it a very valuable offensive zone to play in and a lot of chances are created by passes or dribbles from the halfspace. alongside Pogba or slightly deeper or sometimes ventured between the lines. In both cases, it was to little effect.

Kylian Mbappé and Antoine Griezmann were the main players looking to make a difference for France. They started from the right wing and attacking midfield positions respectively, but roamed far from their starting positions to look for the ball. 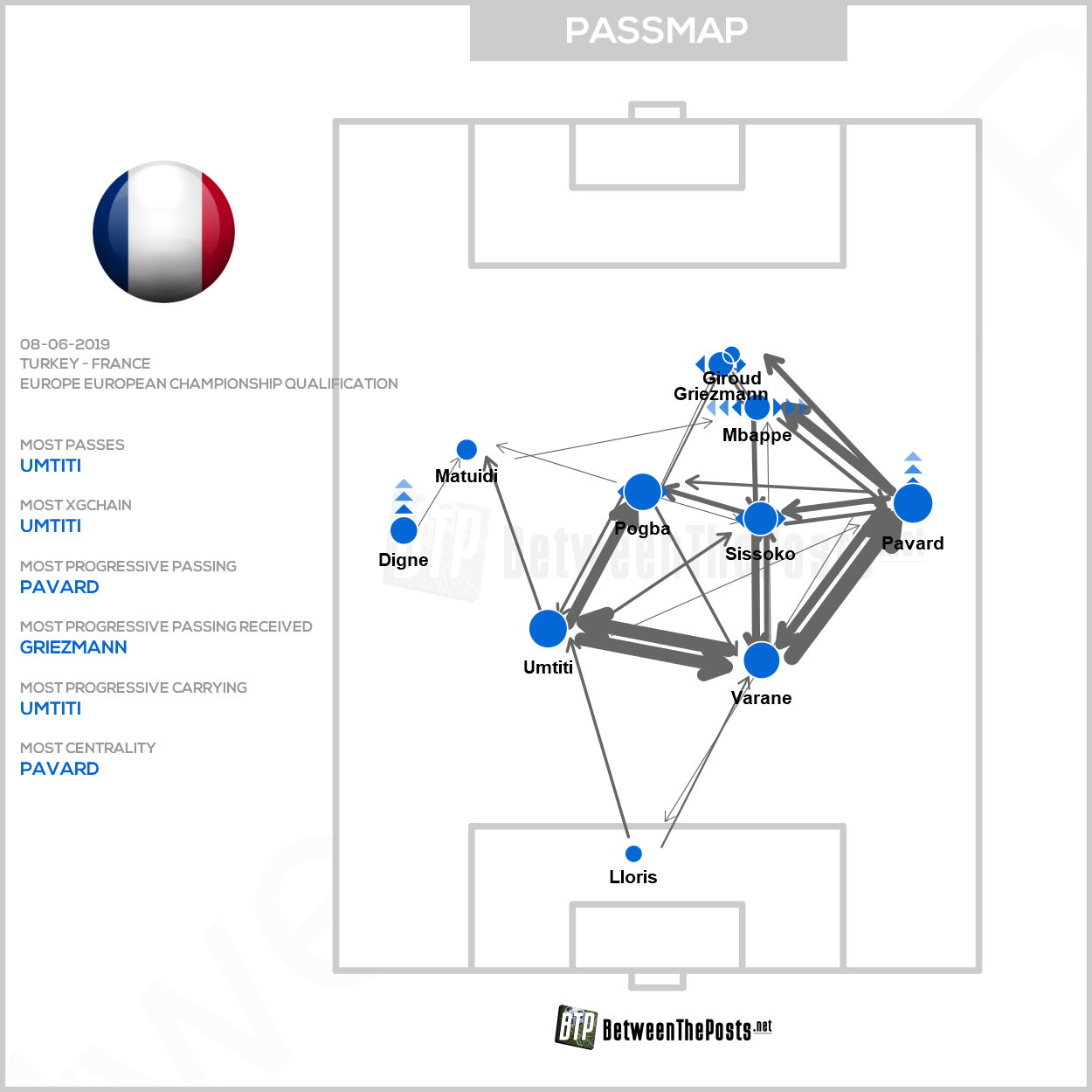 Their good moments, of which there were very few, usually came from Mbappé picking up the ball in deeper positions and trying to start an attack with a one-two or similar combination with a nearby teammate, trying to create a dynamic situation where he could use his speed to create separation between him and the defender. However Mbappé on the night was also quite inefficient with his actions and ended up losing the ball often.

Overall, France’s possession was poorly constructed. They lacked consistent presence behind the opponent’s midfield line, as well as attacking width. As a result, they relied on their individuals to improvise solutions against a well disciplined Turkish defense, who found it relatively easy to contain a France attack which fundamentally lacked structure and cohesion.

Turkey capitalize to take the lead

The home side in their 4-3-3 formation utilized wing combinations and looked to exploit switches of play where possible when they had the ball. Furthermore, they could always use target man Burak Yılmaz as an outlet with long balls.

In the end though, Turkey did not need to do anything special with the ball to get their goals. Their first came from a set piece. An indirect free-kick was chipped towards the back post, where center-back Merih Demiral rose above his marker to head the ball back across goal for his defensive partner Kaan Ayhan, who was completely unmarked as he headed in from just over six yards to put Turkey 1-0 up.

Their second goal came ten minutes later. It came from an innocuous goal kick, which France managed to make a mess of clearing as Turkey looked to win the second ball. Samuel Umtiti and Pogba both failed to deal with the situation as Yılmaz chased the ball down, and eventually Turkey worked the ball to Cengiz Ünder arriving towards the right side of the box. The youngster fired the ball past Hugo Lloris to make it 2-0. 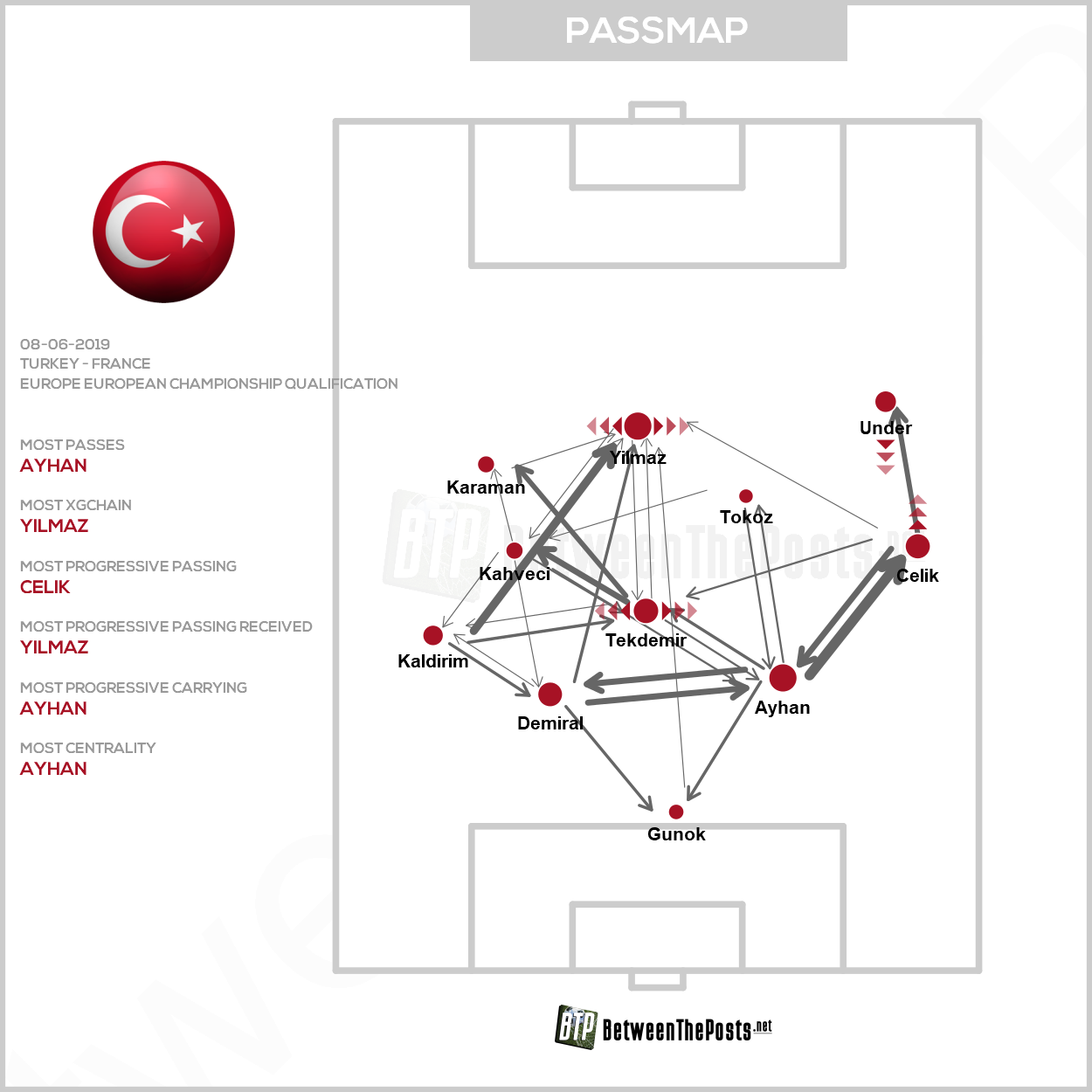 Second half changes an improvement, but not enough

Change was clearly needed at half-time, and Didier Deschamps recognized this. He first brought on Benjamin Mendy as a replacement for Digne at left back. Secondly, Matuidi was taken off and replaced by Kingsley Coman to give a more natural attacking threat on the left for France.

With these changes France fell into a slightly different structure. They still had Sissoko dropping alongside the center-backs and Pogba in defensive midfield positions. Mendy also started from relatively deep, sometimes tucking into the left halfspace, then making late overlapping runs.

What they now had was more attacking width. Benjamin Pavard pushed higher up on the right, and the addition of Coman gave a natural width on the left, and a player who could provide a threat going one-versus-one with defenders.

Their occupation between the lines was slightly better too as Mbappé and Griezmann more consistently held higher positions in central areas, however they were still perhaps to focused on the last line and running in behind instead of getting into good positions to receive into feet between the lines.

The problem was that they faced an organized defense who could just sit deeper and deeper and put more men behind the ball knowing that they did not need to score. And yet Turkey had chances on the counter in the second half. 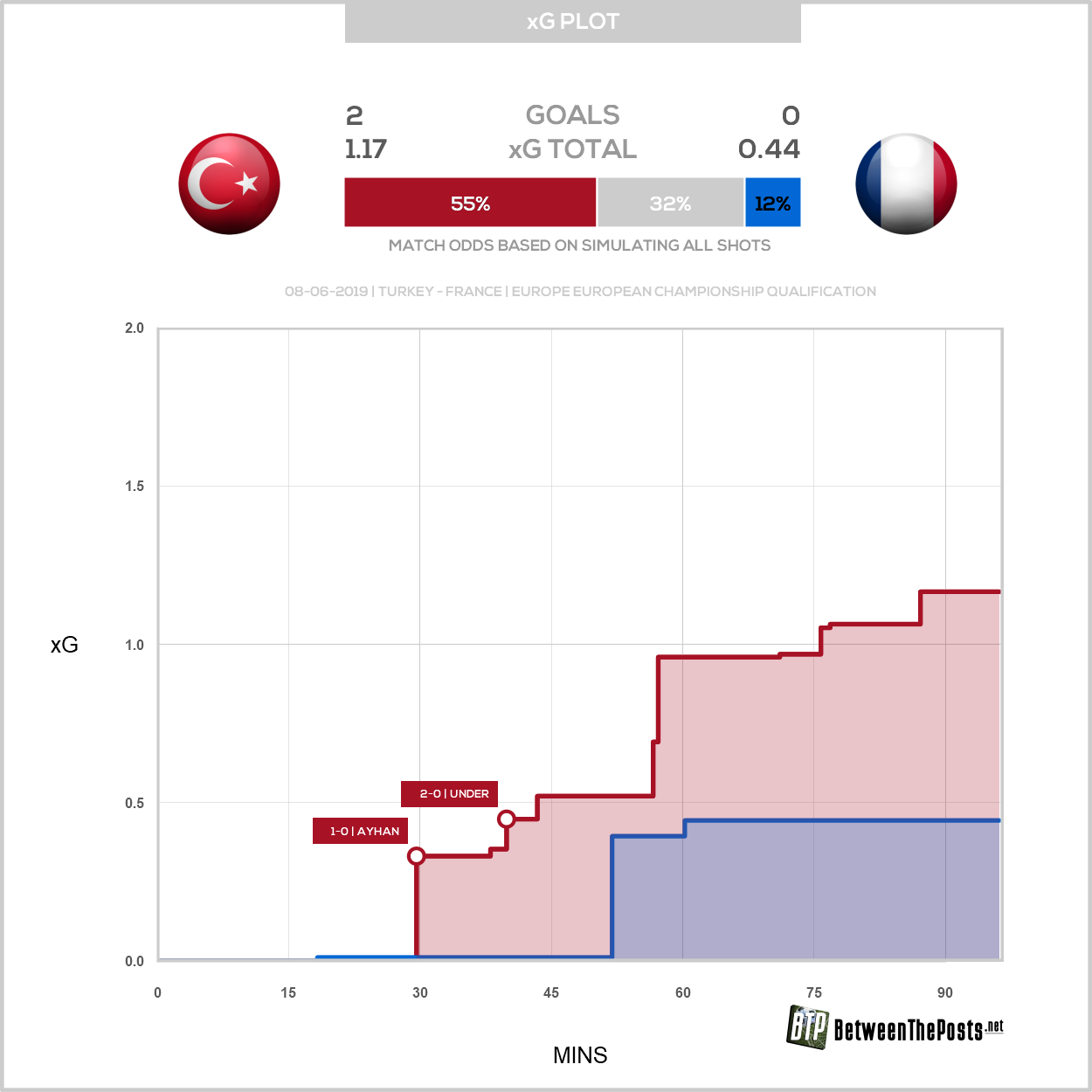 The criticism of France should not take away from the work of coach Şenol Güneş and his players. They were hard to break down and attacked efficiently, as young player such as Merih Demiral and Cengiz Ünder demonstrated their promise for the future.

France under Deschamps are usually at their best when they can play on the counterattack. This serves as an example where their weak positional play is exposed when they are presented with a compact defense to break down. 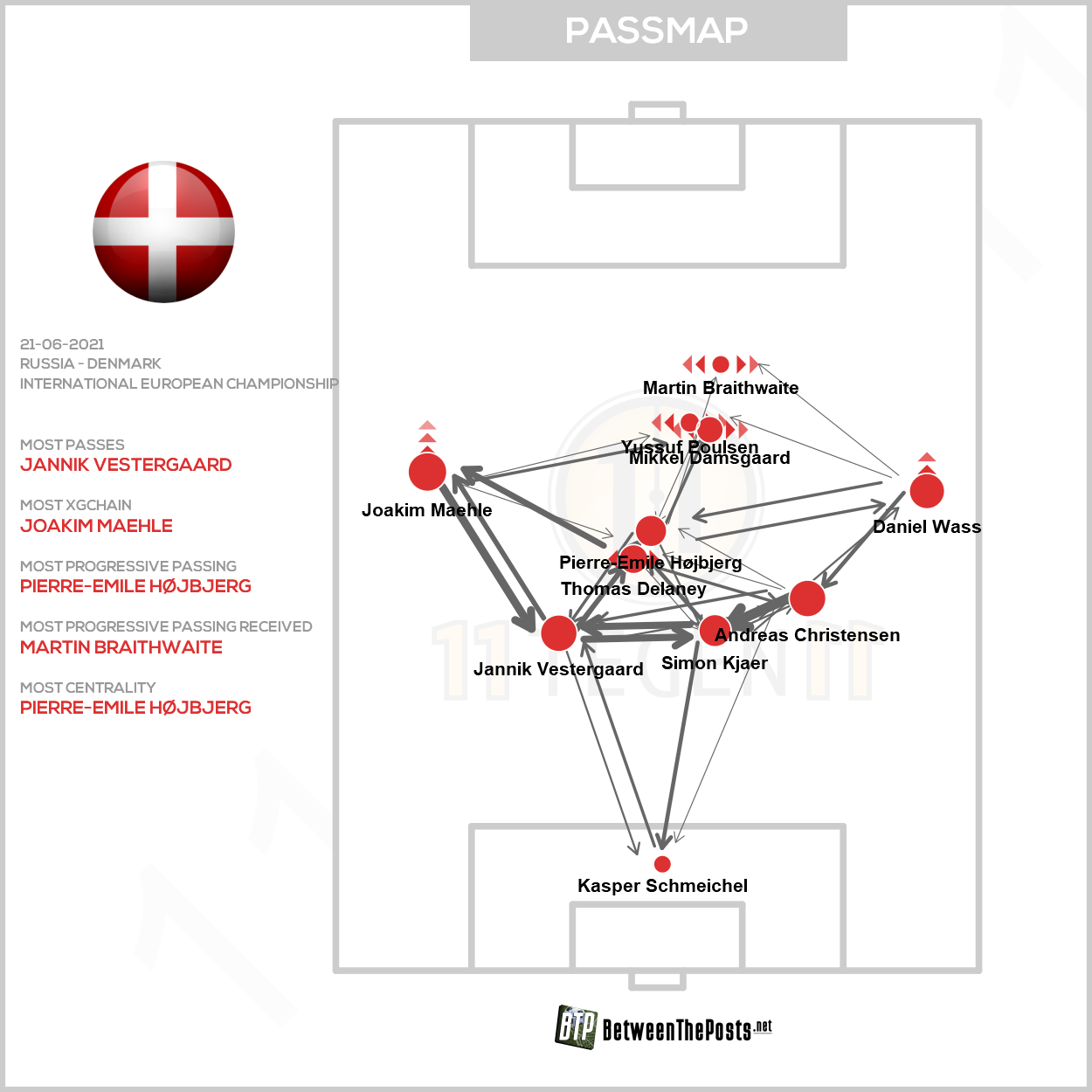