A poignant rendition of Nessun Dorma set the scene for EURO 2020, evoking memories of fabled Italian teams past. But back in the here and now, the Azzurri made sure that they did not disappoint. Their 3-2-4-1 shape on the ball, along with a dogged rearguard, ground down the Turks, rolling back the years to remind everyone of their place in the footballing pantheon.

At last, after a year of waiting, EURO 2020 got underway. The tournament’s opening game pitted two of its dark horses against each other, giving both sides a chance to lay down the gauntlet from the off.

Turkey have quietly gone about their business. Bringing in a new crop of talent, Şenol Güneş guided his nation to second in their qualifying group, just two points adrift of world champions France, who failed to beat them home or away. Stunning the Netherlands with a 4-2 win back in March, they now hoped to mimic that outcome in another back-to-the-wall display and silence the fervent home crowd.

By contrast, Italy came into this game with a point to prove. Failing to qualify for the World Cup three years ago, the nation turned to Roberto Mancini to revitalize the side. But while they have not lost since 2018, this Italian side are yet to compete with the best of the best. Now taking center stage at the start of this competition, Mancini’s men looked to show off their tournament credentials.

Turkish manager Güneş lined up his players in a 4-1-4-1 shape. At the heart of the back four were the talented partnership of Çağlar Söyüncü and Merih Demiral, while Zeki Çelik started as the right back. Hakan Çalhanoğlu played on the left of the midfield, leaving a trio of Okay Yokuşlu, Ozan Tufan, and Yusuf Yazıcı in the middle of the park behind veteran striker Burak Yılmaz.

Mancini set up the Azzurri in their usual 4-3-3 system. Leonardo Spinazzola again got the nod at left back while the manager handed Domenico Berardi a start on the right wing. The major miss from the team was Marco Verratti on the left of the midfield due to a knee injury. A more than able deputy in the form of Manuel Locatelli played in his place.

Italy looked to impose their mark on the game as soon as possible and controlled the lion’s share of the play. On the ball, Mancini’s men rotated from a 4-3-3 shape to their usual 3-2-4-1 structure. The central midfielders, fullbacks, and wingers, in turn, took on asymmetric tasks to create this setup.

Leonardo Spinazzola moved higher on the left flank to offer width, while Alessandro Florenzi tucked in on the right to form the base of three. Nicolò Barella was free to operate higher than Locatelli and Jorginho in the right halfspace, If you divide the field in five vertical lanes, the halfspaces are the lanes that are not on the wing and not in the center. Because there is no touchline like on the wing, players have the freedom to go everywhere. But this zone often is not as well-defended as the very center. This makes it a very valuable offensive zone to play in and a lot of chances are created by passes or dribbles from the halfspace. roaming between the lines like Lorenzo Insigne. Berardi then stayed wide on the right, even higher than Spinazzola on the other touchline.

As is often the case, Italy had a left sided focus on the ball. Locatelli could pick up the ball deep in the left halfspace to free himself from any markers, while Jorginho would move over to offer a supporting option close inside. The pair controlled the flow of the game and helped pin back Turkey in their half.

Out wide, Spinazzola was a continual menace. His strengths lie in dribbling, and at every chance, he teased at Zeki Çelik while carrying the ball with his right foot. Once in the final third, The one-third of the pitch that is closest to the opposition’s goal. he could then switch to his left foot to look for crosses into the box. However, the most promising source of danger was line breaking passes to Insigne.

Indeed, the winger went on to have the best open play chance of the match in its opening stages. Seventeen minutes in, he picked up the ball wide on the left and slowly drifted inside. He then exchanged a sharp one-two combination with Domenico Berardi to end up free inside the box. But looking for his classic swept finish into the far post, Insigne shanked his strike wide of the mark.

Though Italy did not make the most of their dominance in the first part of the game, that missed chance pointed to one of Turkey’s many issues. Especially if they were looking to get back into shape after losing the ball, the setup looked unstable. Man-marking left holes for the likes of Insigne to exploit, and these tactical flaws translated over to set pieces.

22nd minute: Turkey go man-for-man inside the box. Leonardo Bonucci starts on the far post and the trigger for his run is Insigne’s first step. He has a dynamic advantage over Yokuşlu, attracting all the defenders’ attention towards his header. Chiellini then ends up totally free to pick up the second ball.

In the last fifteen minutes of the first half, Italy exerted even more dominance. To the left, Giorgio Chiellini began to dribble with the ball deep into Turkey’s half of the field. Kenan Karaman would often drop off to help double up on Spinazzola with Çelik. Though this movement offered extra cover, the winger left Yılmaz with even less support in the transition.

Indeed, throughout the half, Turkey struggled to find respite on the ball. The two teams would go in at half-time level on the scoreline, but only one side looked likely to seize the initiative. 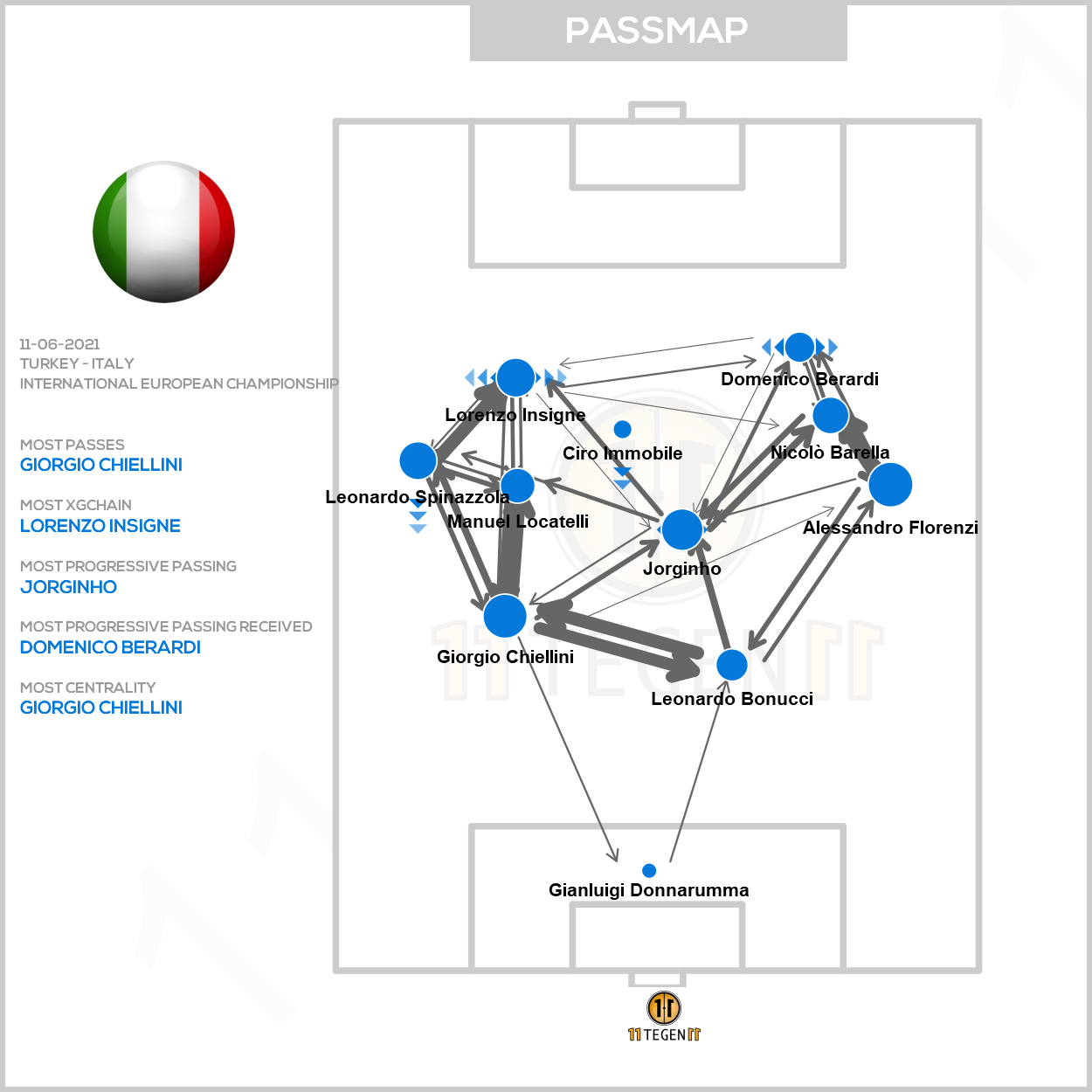 Both managers made changes at the start of the second half. Cengiz Ünder came on for Yusuf Yazıcı, while Florenzi, who had picked up an injury, made way for Giovanni di Lorenzo. The substitution did little to change the flow of the game for Turkey. On the other hand, di Lorenzo’s introduction signaled further positive tweaks for the Italians. As early as a quarter of an hour into the contest, the right side of the attack had already seen some tweaks.

Florenzi no longer always tucked inside to form the base of three, now drifting at times to the sideline. The right back showed more positional flexibility as the half went on, and di Lorenzo enjoyed such license too once he entered the fray. Moments into the second half, he hared forward from outside to inside into the final third to draw a corner. This sequence set the tone for the remainder of the game as Mancini’s men showed more fluidity and precision in their movement with the ball.

62nd minute: A common second half pattern saw di Lorenzo underlap through the halfspace to offer depth. In turn, Barella stayed wider and Jorginho was deep in the halfspace to balance the structure.

In the 53rd minute, Italy’s patient work finally found their reward. Locatelli picked up a pass deep in the left halfspace before switching the play out to Barella. The midfielder then looked outside to Berardi, who was one on one with his marker. Slipping free towards the six yard box, the winger drilled a cross towards Immobile, only for Demiral to deflect the ball into the back of his own net. 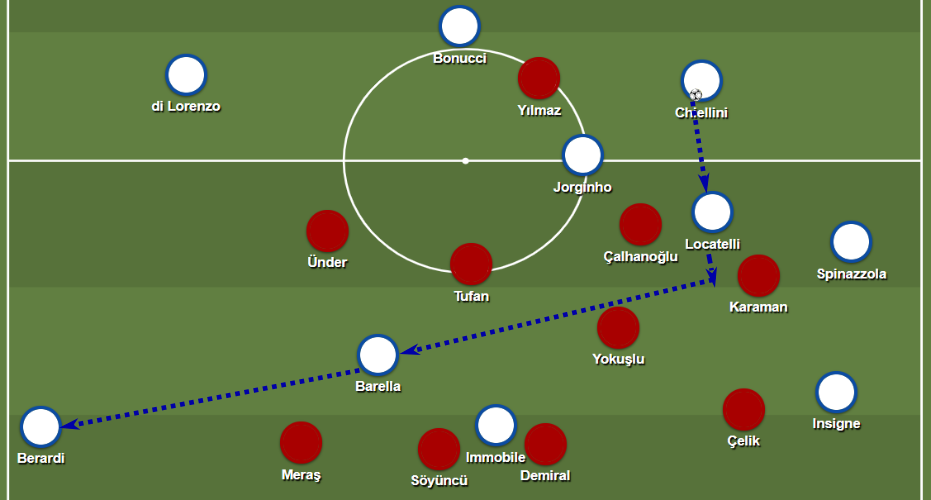 53rd minute: Buildup sequence leading to Demiral’s own goal. Locatelli and Jorginho double up on Çalhanoğlu, allowing the former to pivot forward between the lines and switch from one halfspace to the other. The key here is to move the ball quickly after the switch to isolate Berardi one-on-one.

Thirteen minutes later, the game was over. Again the buildup saw a switch of play from left to right, leaving Barella unmarked in the halfspace. The midfielder linked up once more with Berardi, who dinked the ball to Spinazzola into the box. Uğurcan Çakır parried the left back’s initial volley but Immobile rifled home the rebound to double Italy’s lead.

Italy scored a third with thirteen minutes left on the clock. Berardi intercepted an underhit pass from Çakır before finding Barella. The ball worked its way through Immobile to Insigne, who pulled off his signature finish to beat the goalkeeper all ends up. 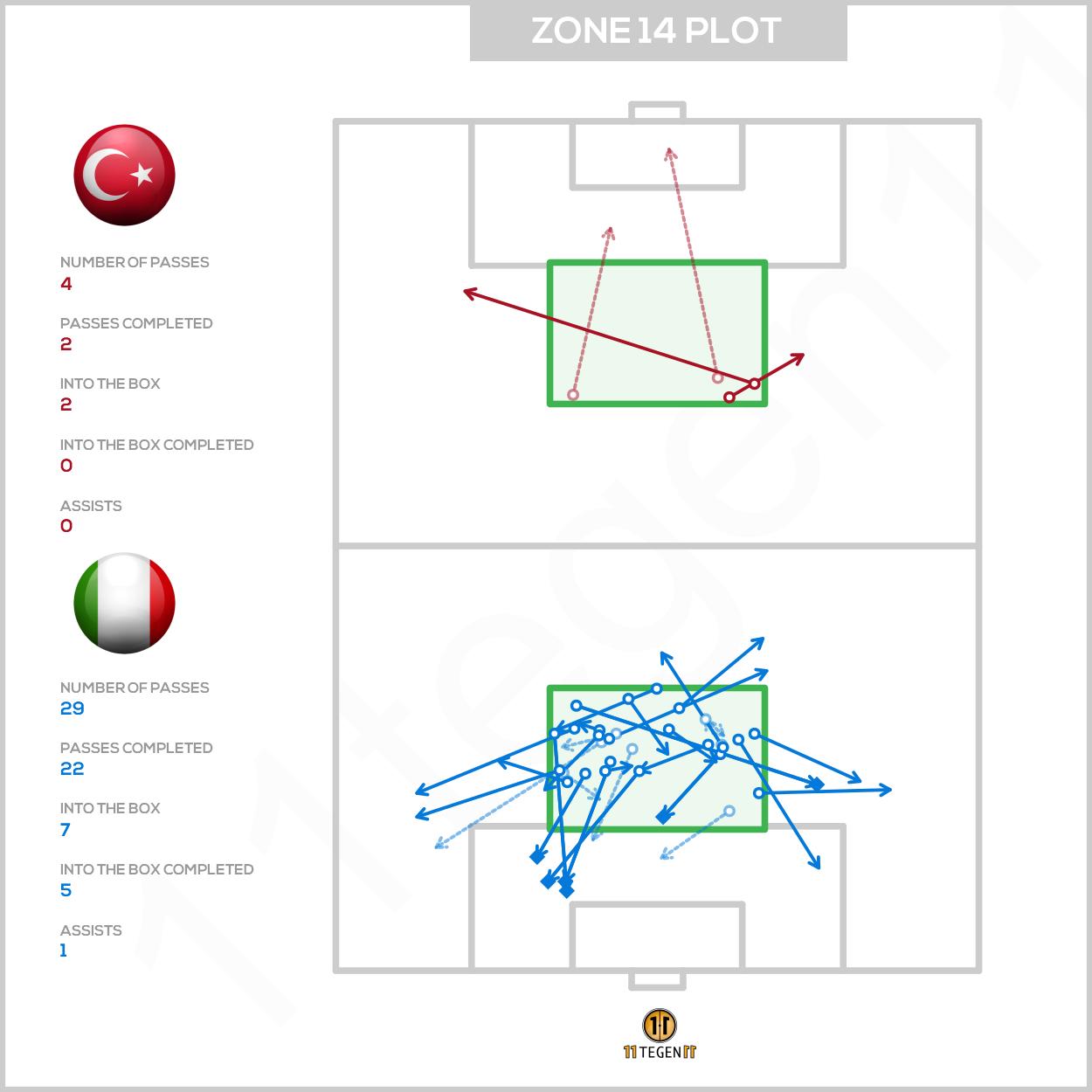 Italy have made an ideal start to their campaign. Question marks have hung over the value of their form given their opponents, but they put in an impressive display, especially in terms of the tweaks to shape and personnel. Mancini will now look to back up that result with a strong showing against Switzerland and wrap up a place in the Round of 16.

Such a loss will temper expectations for Turkey, who may find it favorable to go under the radar from here. Set pieces are still a cause for concern, while their instability off the ball in this game indicated what can happen if the side cannot impose their will. They will need to show much more from here to come good on their dark horse status and their crunch tie with Wales is the perfect time to do it. 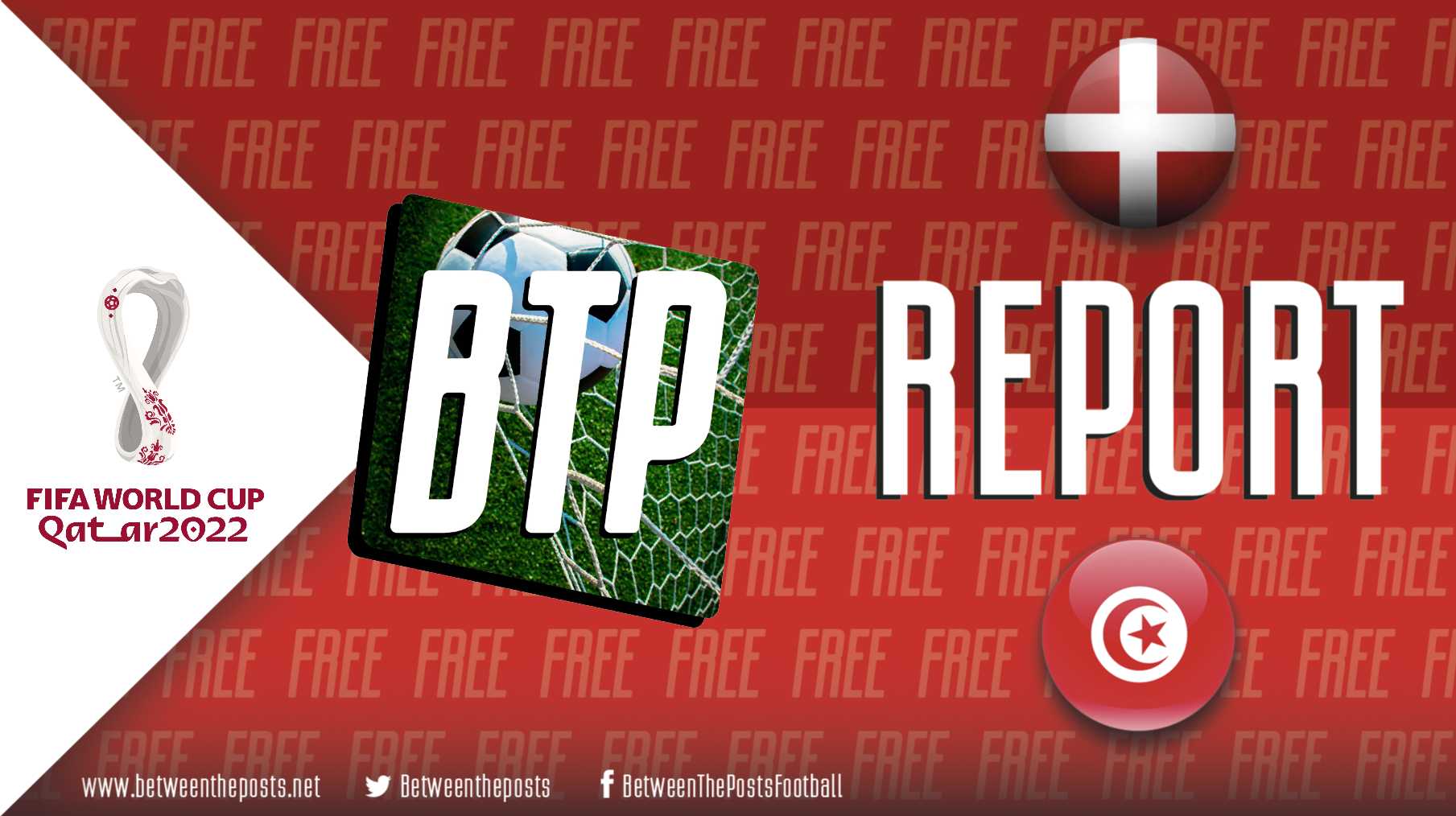 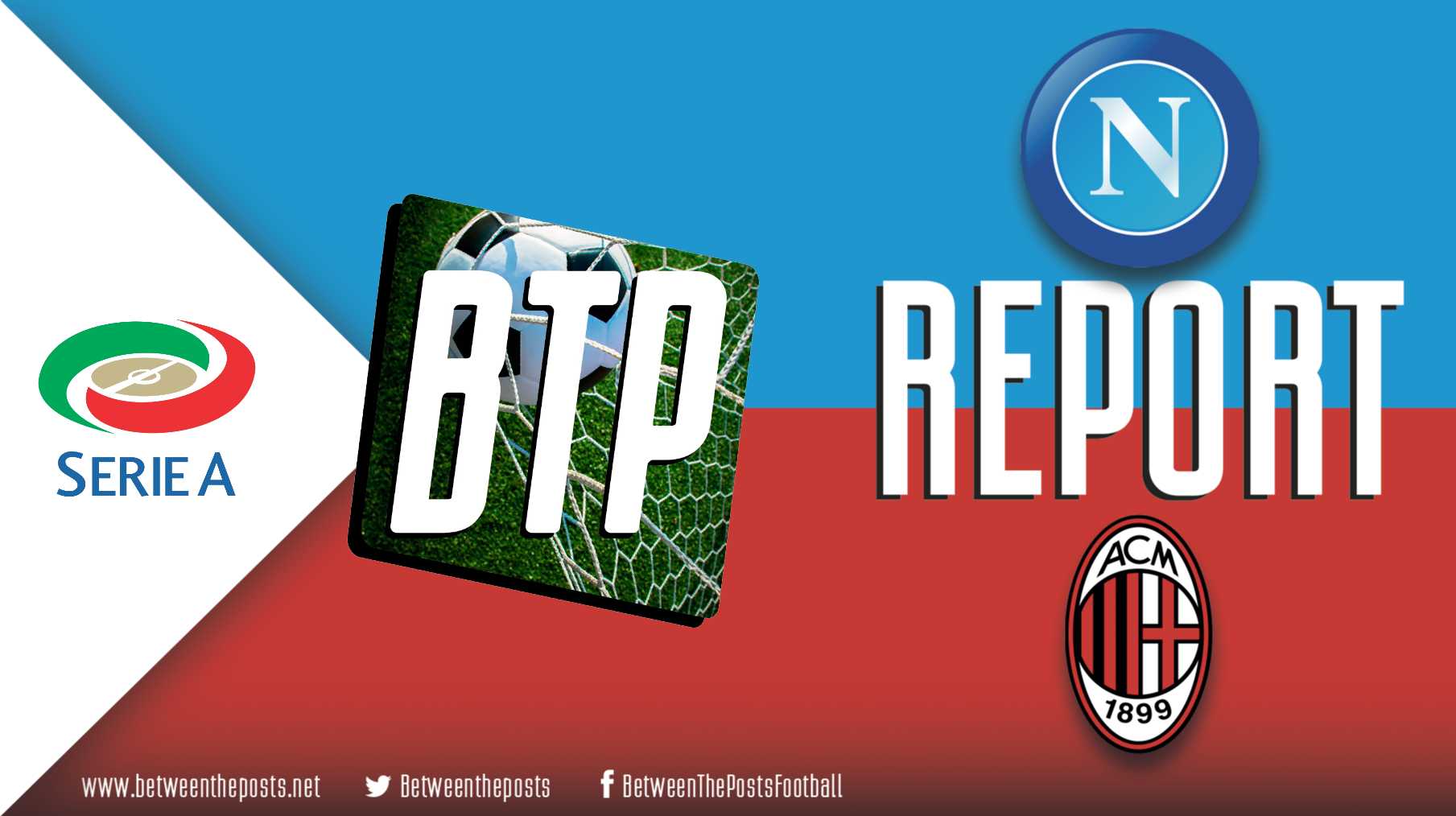