Uruguay – Ecuador: Intense Uruguay Is Not Messing Around In Opening Game Versus Ecuador (4-0)

Uruguay enters the 2019 Copa América in spectacular fashion, showcasing their intense and direct football identity and reminding everyone why they are one of the title favorites. With the extreme mobility of the Suárez-Cavani striker duo, and the intensity and workrate of their players on the wings, Uruguay won the game in the first half aleady, demolishing an Ecuador side with poor defensive and offensive structure.

Uruguay comes into the Copa América as one of the title favorites after a strong showing in the 2018 World Cup. Their legendary coach, El Maestro Óscar Tabárez, has carefully organized a slow but steady squad renewal process. For this tournament, only five squad players (Diego Godín, Luis Suárez, Christian Stuani, Martín Cáceres and Edinson Cavani) are over 30 years of age. Uruguay’s renewal is particularly noticeable in midfield areas, with an exciting new generation who are more creative than their predecessors while still retaining the traditional Uruguayan defensive work rate: Rodrigo Bentancur, Lucas Torreira, Nahitán Nández, Diego Laxalt, Federico Valverde, amongst others.

Against Ecuador, Uruguay lined up with their near-unchanging 4-4-2 shape. The tactical foundation of this team lies in their two world-class duos, one of central defenders – Godín and Jose María Giménez – and one of strikers – Suárez and Cavani. Fullbacks were Laxalt on the left and a surprisingly offensive Martín Cáceres on the right. In midfield played a double pivot of Matías Vecino and Bentancur, who were preferred over the more defensive Lucas Torreira. On the wings, Nahitán Nández played on the right and Lodeiro on the left. 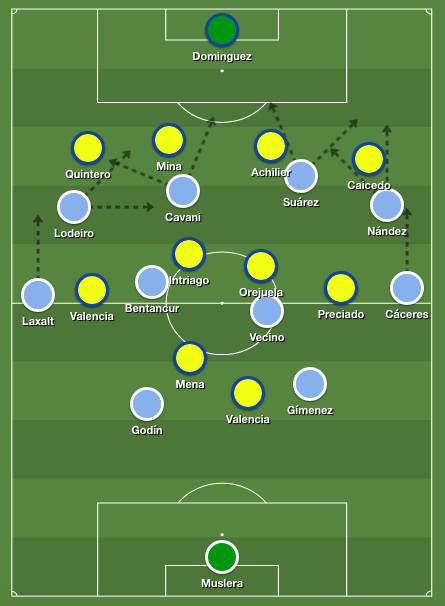 Uruguay’s 4-4-2 attack against Ecuador 4-4-1-1 defensive block. Notice the mobility of Uruguay’s striker duo, both of them constantly drifting wide.

After a promising start to the 2018 World Cup qualifiers, Ecuador deflated and failed to qualify. Their traditional leaders – Jefferson Montero, Christian Noboa, Antonio Valencia, Enner Valencia – will all be over 30 years of age by the 2022 World Cup, so squad renewal seems necessary.

Fortunately, Ecuador has an excellent new generation coming up, who just reached the semi-finals of the U-20 World Cup. It will take a few years for these young players to be ready to take leadership of the senior team, so Ecuador comes into this Copa América in a weird transition limbo, playing mostly with the remnants of the older generation while they wait for the incoming new blood. To lead this transition period, Ecuador has hired the old fox Hernán Gómez, the coach who led Ecuador to their very first World Cup in 2002.

Against Uruguay, Ecuador lined up in a nominal 4-2-3-1 shape. The goal of Alexander Domínguez was defended by central defenders Gabriel Achilier and Arturo Mina, with fullbacks José Quintero on the right and Beder Caicedo on the left. Midfield saw a double pivot of Jefferson Orejuela and Jefferson Intriago, who were preferred over Carlos Gruezo who is doing a good job in the MLS. Up front, veteran captain Antonio Valencia and Ayrton Preciado played on the wings, with Ángel Mena – who has enjoyed a great 2019 as the top scorer of the Mexican Clausura Tournament – playing as a free-roaming attacker. Enner Valencia continues his role as Ecuador’s leading striker.

Were Ecuador even playing?

Even before the early sending off of José Quinteros in the 24th minute, it was awfully clear who the better side was. Uruguay’s intensity destroyed a naïve and disorganized Ecuador defense, a unit that looked clueless throughout the entirety of the first half. Especially before the sending off, their defense lacked structure and shape. They seemingly wanted to keep a 4-4-1-1 defensive shape, but rarely did this materialize on the pitch. Players did not stay in position, not knowing whether to press or to stay back. Whenever an Ecuador player tried to press, they left huge gaps of space behind them, that Uruguay attackers took advantage of.

Their defense of the penalty area was chaotic, and rarely did they track Uruguay’s attackers well in the box. The mobility of Suárez and Cavani was a puzzle they could never solve, and this was made worse by Lodeiro and Nández aggressively moving into the box too. When Uruguay was crossing into the box, Ecuador’s defenders would desperately move closer to the goal line or rush to the ball, completely forgetting about the Uruguay attackers who lurked behind them in the zone around the penalty spot. Many Uruguay shots came from this amateurish mistake.

Attack had as little structure as defense. Ecuador had no pathways to the opposition goal. If they tried to send long balls forward, Uruguay’s defense and midfield would win the aerial duels. If they tried to progress through the wings, Uruguay’s superior intensity and defensive solidarity would prevail. Ecuador could never create overloads When one team has more players in a certain area or zone than the other team. on the wings because Uruguay players always made sure their teammates were in numerical inferiority, even if that required them to track back fifty meters. The difference in the physical intensity of both sides was noticeable.

Despite Uruguay’s midfield renewal with more creative talent, the recipe for their dominance in this game was the traditional one: directness, wing play, physical intensity. Uruguay were not interested in holding the ball for too long, and both central defenders and midfielders would try to get the ball to the wings as quickly as possible. Fullbacks Laxalt and Cáceres were incredibly aggressive going forward, constantly trying to combine with their respective wide midfielders, Lodeiro and Nández.

On the left side, Lodeiro and Bentancur acted as Uruguay’s command center on the ball, forming a triangle with left back Laxalt where Uruguay accumulated most of their passes and possession. Cavani would often drift to the left to help overload Ecuador’s defenses and allow the team to move forward and create chances, and immediately after rush into the box to score. 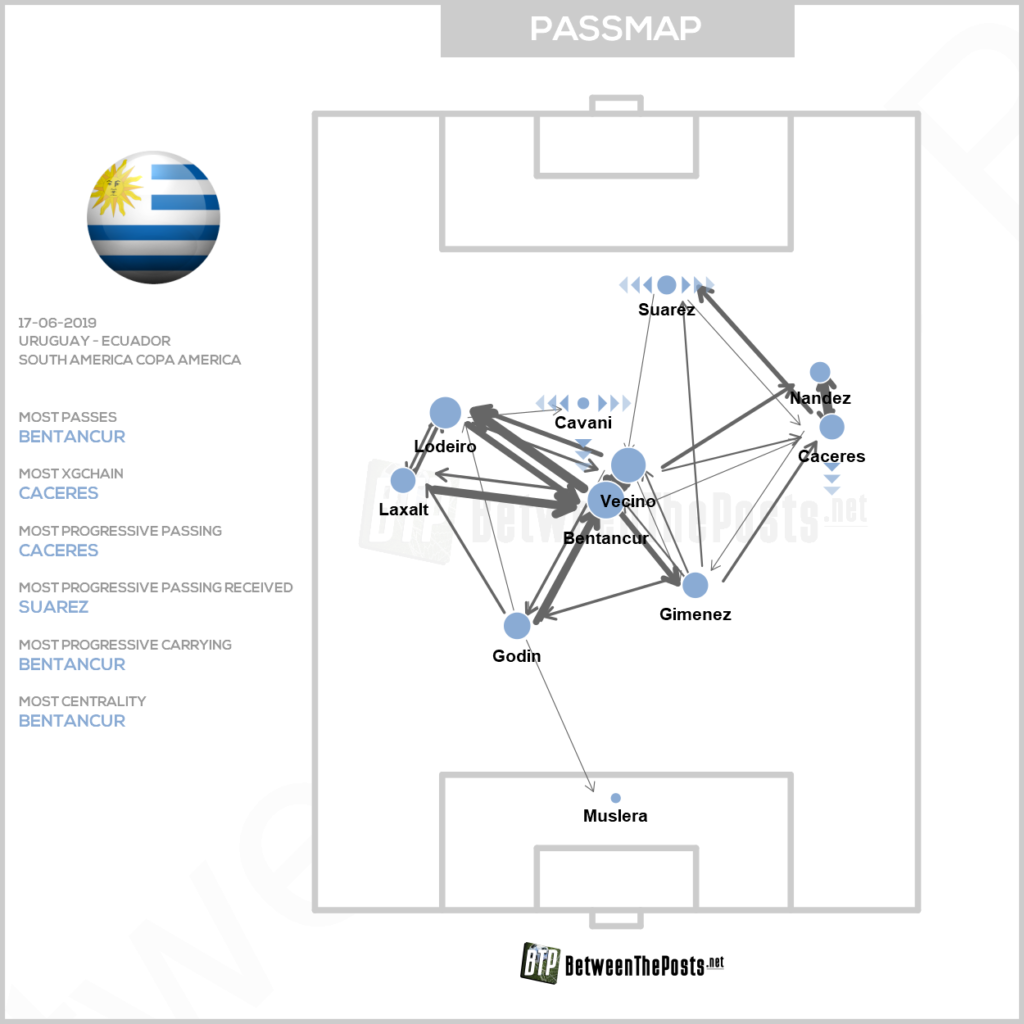 With the Uruguayan left side keeping the ball and attracting Ecuador defenders, there were a lot of open spaces available for Uruguay’s right-side attack. Cáceres and Nández were more direct and aggressive than their counterparts on the left. Instead of racking up horizontal passes, both players would constantly try to move forward as quickly as possible and create chances. The pair were supported by the intelligent interventions of Luis Suárez, who constantly drifted to the right side. Suárez might not be a physically dominant striker anymore, but his tactical intelligence is second to none and that makes him a very productive player. The Cáceres-Nández-Suárez triangle cut deep into the final third, The one-third of the pitch that is closest to the opposition’s goal. constantly producing crosses and cutbacks which led to Uruguay’s best chances from open play.

That’s how Uruguay’s first two goals came about. In the sixth minute of the game, a cross from Suárez was picked up by Lodeiro on the left, who was in a disadvantageous position against a number of Ecuador defenders. With two spectacular ball controls, Lodeiro eliminated two defenders and produced a magnificent finish, shooting with his left just as the ball was bouncing back up.

In the 32nd minute, a low cross from Nández was turned into a stunning backheel shot by Cavani, who was having a field day running circles among Ecuador defenders. Keeper Domínguez saved that shot, but Cavani would be merciless in the corner kick that followed. Moving like a ghost among the Ecuador defense, Cavani made himself an opening to score from a scissor kick. A masterclass of tactical intelligence and physical intensity that summarizes what makes Cavani, and this Uruguay team as a whole, so great.

The third goal, late into the first half, came from another corner kick. In a less spectacular but equally intelligent way to Cavani, Suárez slipped into a scoring position, ready to push the ball into the net after Cáceres won the aerial duel in the box.

Chaotic Ecuador fails to react, and little happens in the second half

As the reader might imagine, three Uruguay goals and an early sending off created a perfect recipe for practically nothing to happen in the second half. The expected goal The amount of goals a team is expected to score based on the quality of the shots they take. plot faithfully reflects this, with both teams expected goal production essentially flat-lining throughout the second half. 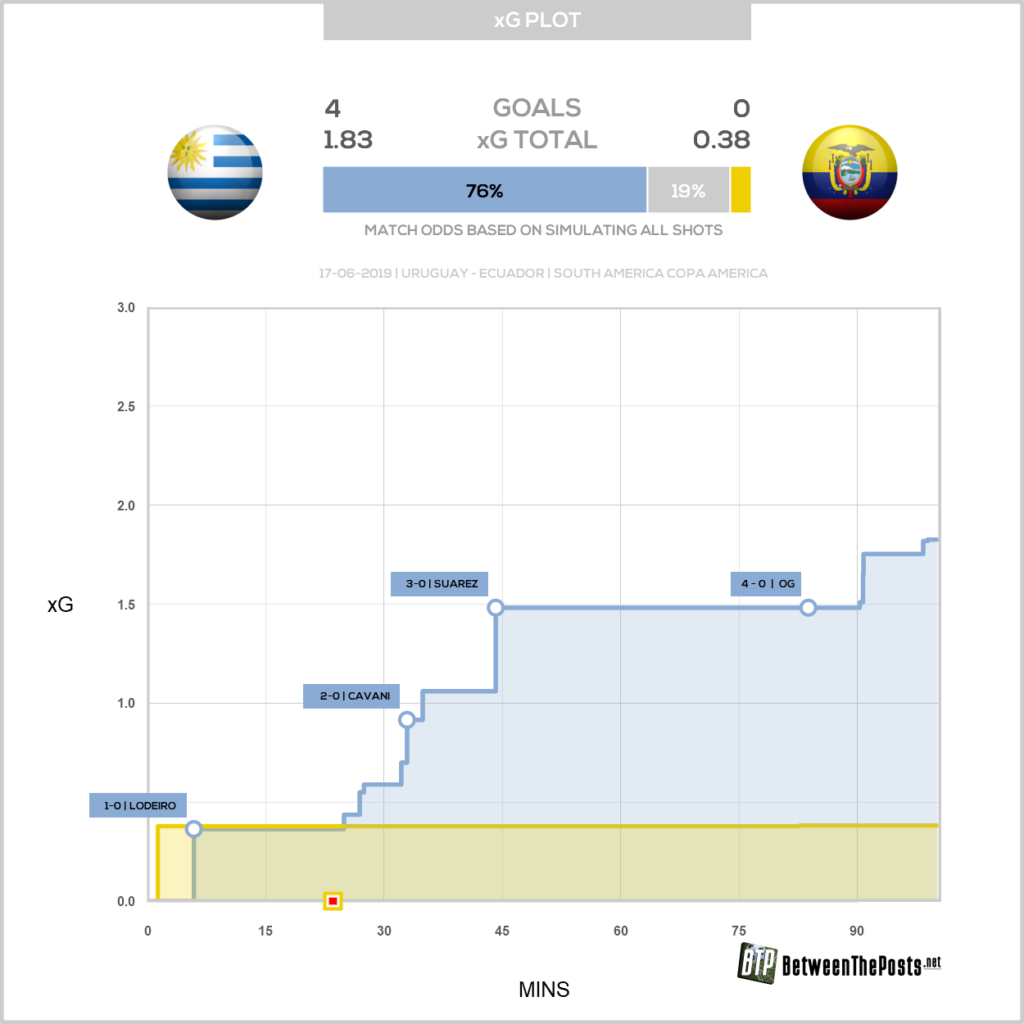 Uruguay significantly decreased the intensity of their attack. They circulated the ball around more slowly, attacked more carefully. There was no reason to rush and be intense anymore, as the game was already decided. Meanwhile, Ecuador was in survival mode, more interesting in preventing more goals and a historic thrashing from their opponents than in scoring a goal of their own. Their defensive organization seemed tighter; their lines more compact. Nonetheless, it was hard not to feel that Uruguay could score a goal whenever they wanted.

Substitutes gave Uruguay’s attack a bit of a boost and dynamism, with Gastón Pereiro replacing Nández, Lucas Torreira replacing Lodeiro (a clearly defensive substitution), and Federico Valverde replacing Vecino. Just like Nández, Pereiro was also very productive at sending crosses into the box, which lead to the few open play chances of Uruguay’s second half.

But the game could not end without one final failure from the Ecuador defense, with their inability to clear a cross from Cavani turned into a cartoonish own goal by central defender Mina. A fitting end to a disastrous performance.

It’s a bit hard to make conclusions because their opponent was almost non-existent, but Uruguay clearly staked their claim as one of the tournament’s favorites. Few teams in the world can match their combination of physical intensity, defensive organization and solidarity. Their attacking mechanisms – wing play and set pieces – are direct, simple, predictable. However, Uruguay are so good at what they do that they’ve turned their predictability into inevitability.

Just like one can know the trajectory of a cyclone and is powerless to stop it, most teams in South America—and the rest of the world—will be unable to contain the force of nature that is the Uruguayan attack, even if they know where the attacks are coming from.

As for Ecuador…we wish them good luck in the rest of the tournament. They’ll need it. 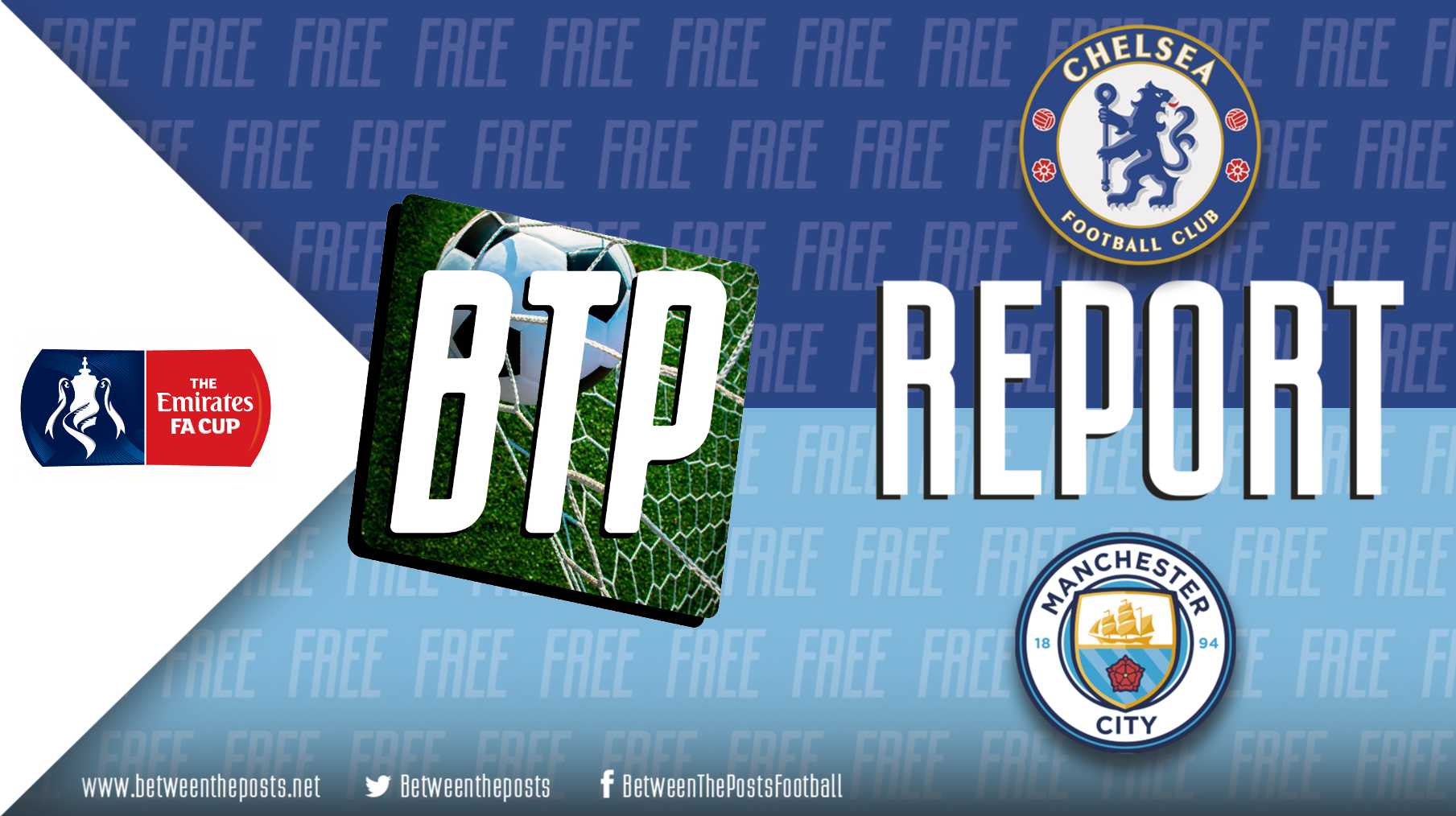