Uruguay’s vertical and intense approach made this a game revolving around direct play, counterpressing and counterattacks. Uruguay’s possession was fairly ineffective in the first half, but looked dangerous in the second half, especially when Japan sat deeper and Uruguay could send cross after cross into a packed penalty box. Ultimately, they were unable to find a winner, however.

Uruguay made just one change compared to their impressive 4-0 win over Ecuador, in their opening Copa América game. Matías Vecino dropped out of midfield, to be replaced by Lucas Torreira, who partnered Rodrigo Bentancur centrally in their 4-4-2 formation. Playing Vecino and Bentancur in central midfield together does not make a lot of less sense from a tactical point of view. Both players have roughly the same tactical profile: box-to-box midfielders that function best when given license to drift forward. Adding Torreira in midfield makes sense in theory, as he is more of a defensive midfielder, and arguably a better passer than both Bentancur and Vecino.

Japan came to this Copa América with a very young squad, in order to experiment and give young players a taste of tournament football. Following their 4-0 defeat against Chile, manager Hajime Moriyasu made five changes to the line-up, including youngster Takefusa Kubo in their 4-2-3-1 shape, while also fielding one of the few veterans that has made the trip to Brazil: Leicester City’s forward Shinji Okazaki.

Uruguay aggressive out of possession

From the get, Uruguay showed some of the defensive attributes they are known for, namely their intensity against the ball. They defended very ball-oriented, especially in the opening stages, quickly shifting the team when Japan moved the ball to the wings, with Uruguay committing heavy presence to crowd out the ball in these wide areas. 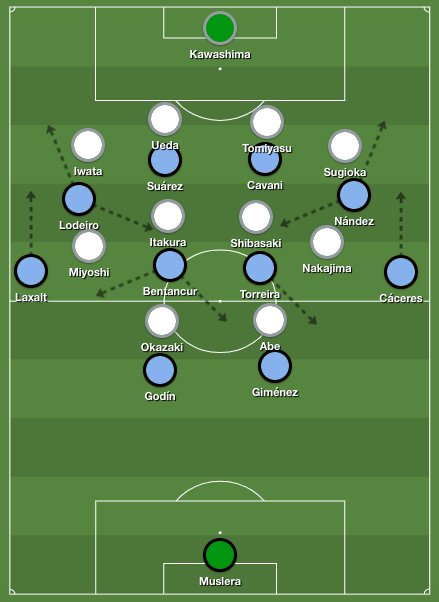 Uruguay’s formation and general movements in possession against Japan’s 4-4-2 formation.

They defended in a compact 4-4-2, which could sometimes appear as a 4-1-3-2 or similar shape when one of the central midfielders pushed forward onto one of the Japan central midfielders, dropping in front of their center-backs. Bentancur and Torreira in general had a large action radius without the ball, covering a lot of ground for their team in all directions.

With their aggressive shifting, Uruguay were not always perfectly balanced though, and this partly led to Japan going 1-0 up after 25 minutes. Uruguay committed heavily to pressing the ball on the right midway through Japan’s half of the pitch. Japan were able to switch the ball out to the right wing with a diagonal pass into the path of Koji Miyoshi though, and the winger ran with the ball into the box and shot past Fernando Muslera.

Directness with the ball

When they had possession, Uruguay were quite direct with their buildup, which was partly due to the constraints they imposed upon themselves with their structure in possession. Their structure also simplified the task for Japan when it came to pressing.

With the ball, Uruguay’s fullbacks would push up the pitch level with the central midfielders or slighly higher. The wingers would sometimes drift into the halfspaces in advanced areas, especially
Nicolás Lodeiro, whereas Nahitan Nández would usually stay slightly wider.

Basically, their offensive formation was something resembling a 2-4-4 shape. A problem immediately evident was the lack of halfspace If you divide the field in five vertical lanes, the halfspaces are the lanes that are not on the wing and not in the center. Because there is no touchline like on the wing, players have freedom to go everywhere. But this zone often is not as well-defended as the very center. This makes it a very valuable offensive zone to play in and a lot of chances are created by passes or dribbles from the halfspace. occupations in deeper zones within their buildup, which reduced their possibilities to outplay Japan’s midfield pressing.

The two central midfielders often stayed as a relatively flat pairing ahead of the center-backs, creating a ‘box’ with the central midfielders and center-backs playing in the same vertical line. This made it quite easy for Japan’s strikers in their 4-4-2 medium block A medium block refers to a team that retreats in their own half out of possession, generally only disrupting their opponents some way into their own half. to keep Bentancur and Torreira in their cover shadows When a player is positioning himself between the opponent that has possession of the ball and another opponent, he is blocking the passing lane. When applied the right way, his ‘shadow’ is effectively taking the opponent in his back out of the game, because the pass can not be played. and press the center-backs of Uruguay.

This usually forced José Giménez and Diego Godín to rush into long balls or send the ball back to the goalkeeper, as there were rarely supporting angles from the central midfielders, and the connection to the fullbacks was often weaker as they moved up the pitch increasing the distances between themselves and the center-backs. 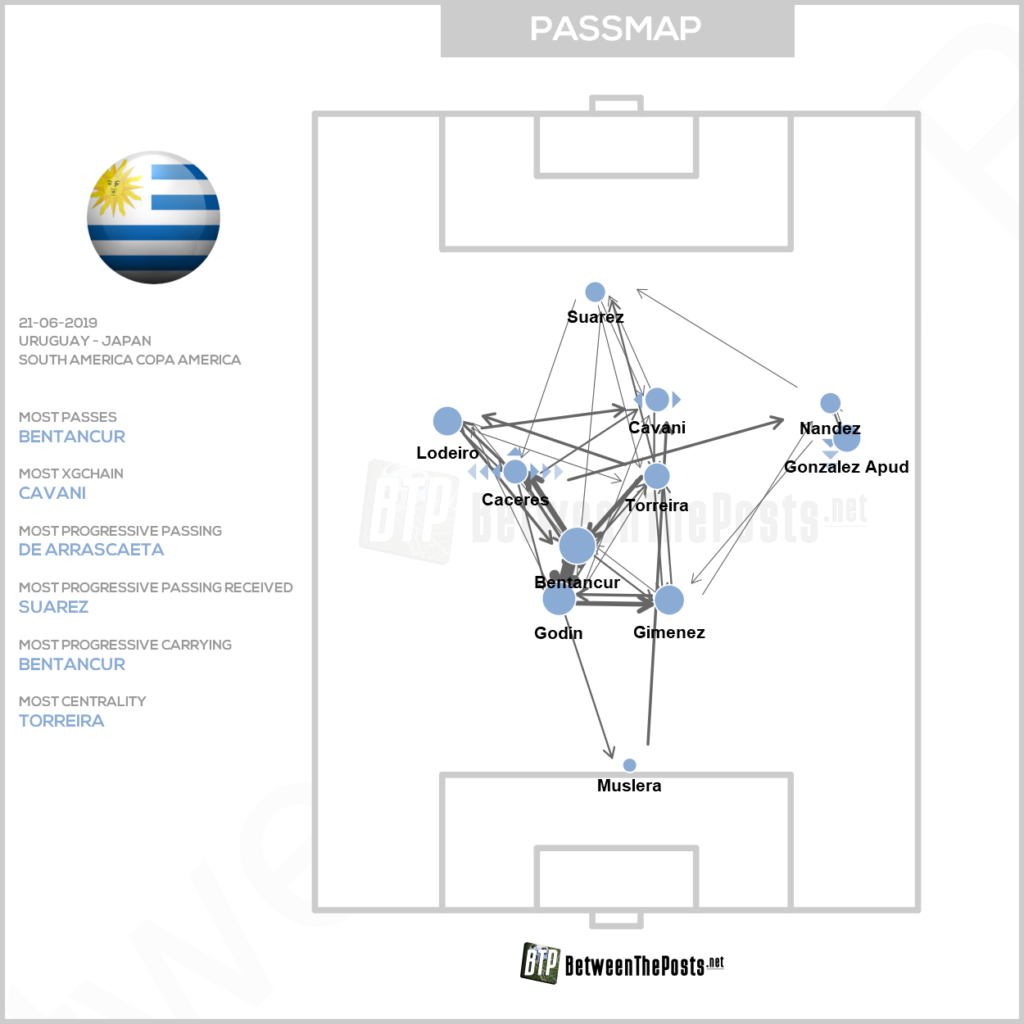 Uruguay only played constructively through the center if Edinson Cavani or Luis Suárez dropped between the lines to provide a connection, and it was rare that an appropriate angle to receive the ball could be found. Instead then, the center-backs played long balls into the corners or in behind the defense, they looked to pick up  the second ball.

The long ball in behind was what actually led to the penalty, which got Uruguay their equalizing goal, as Cavani latched onto a chipped pass behind the Japan defense before being fouled in the box. Suárez then slotted the penalty in to make it 1-1, which was also the score at half-time.

Japan hold on for the draw

The early parts of the second half saw an unsettled game with a lot of transitioning. Both teams were direct and looked to counterpress After losing possession, a team immediately moves towards the ball as a unit to regain possession, or at least slow down the pace of the counterattack. and counterattack wherever possible. Japan came out of this phase on top as they managed to go 2-1 up after Muslera spilt a cross into the path of Miyoshi who grabbed his second goal of the game.

Again though, Japan’s lead did not last long, and within ten minutes Uruguay had equalized once more. The goal came from a corner as Giménez’ glancing header at the front post found the bottom corner.

From this point onward Japan’s defensive line sank deeper and deeper, while Uruguay pushed for a winner. As ever, Uruguay persued their goal through fairly direct means. There was little connection between the lines. They competed for long balls, loaded the Japan box with their front four and hit early crosses from deep positions, forcing Japan into physical duels and emergency defending in their own box.

Garra charrua football, as Uruguay’s strategy was pretty uncomplicated, but it created plenty of danger. They accumulated plenty of shots and came close to scoring on a few occasions including hitting the crossbar. Japan in the end did well to hold onto their draw. 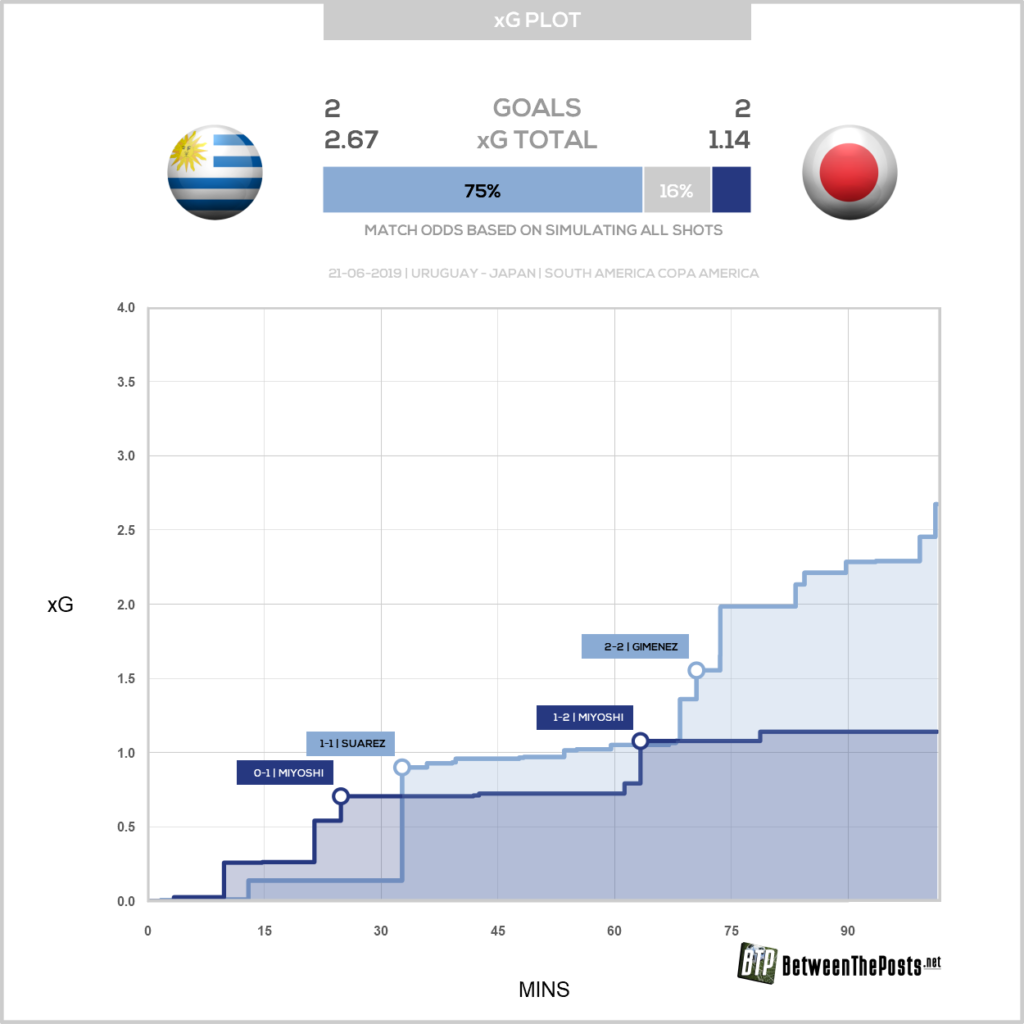 Uruguay applied the pressure in the latter stages of the game and on another day probably could have walked away with a win. Their possession game has known weaknesses, but that has never been their strong suit anyway. Uruguay are likely to qualify from the group, and will probably excel more in the knockout stages where they may face teams more willing to open up and attack, from which Uruguay can look to play a strong counterattacking game.

Japan allowed themselves to be pushed quite deep in the second half and just about managed to hold out against the Uruguay pressure. Their overall performance was solid but not spectacular, and qualifying from the group looks difficult from this position. 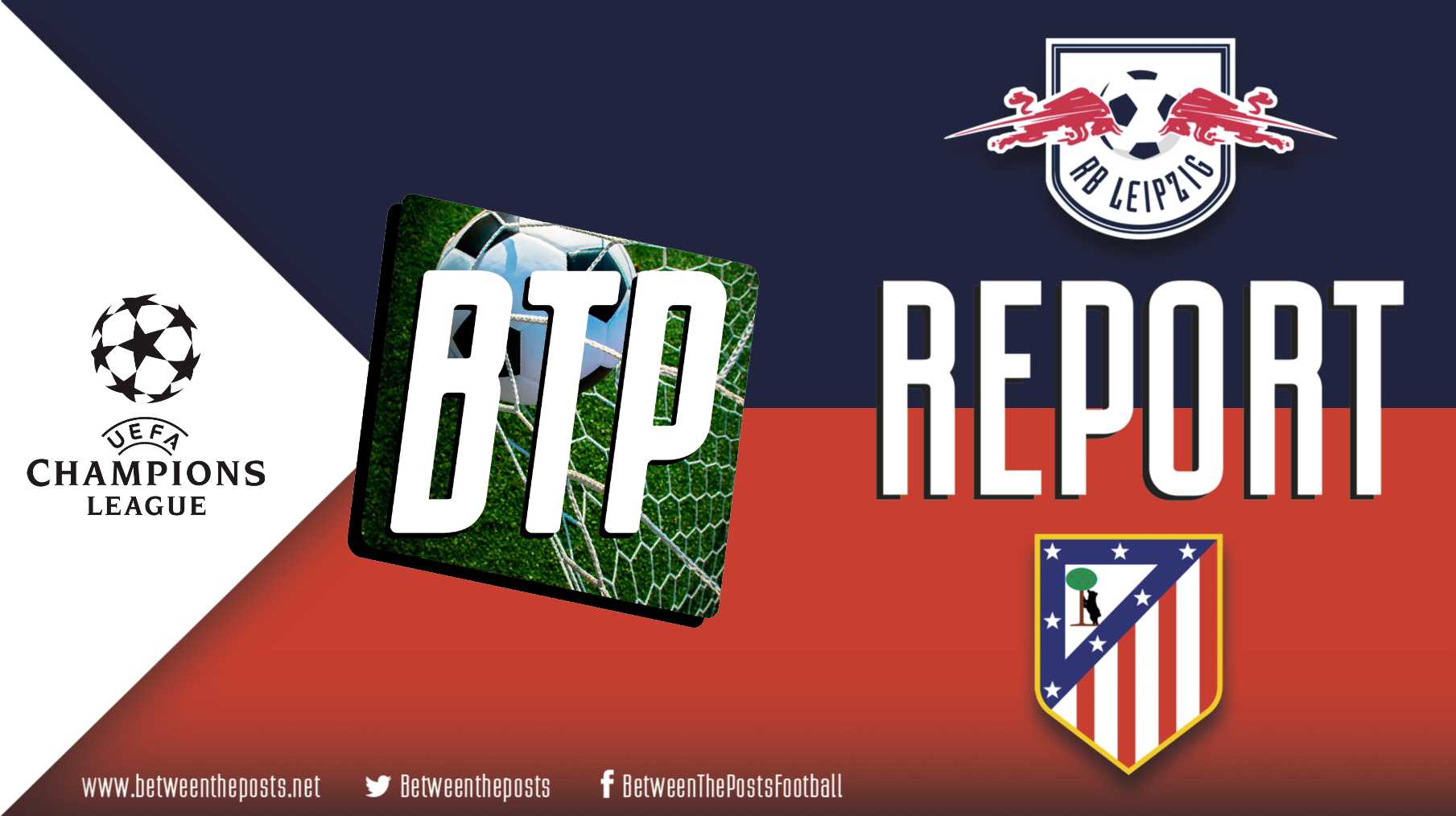 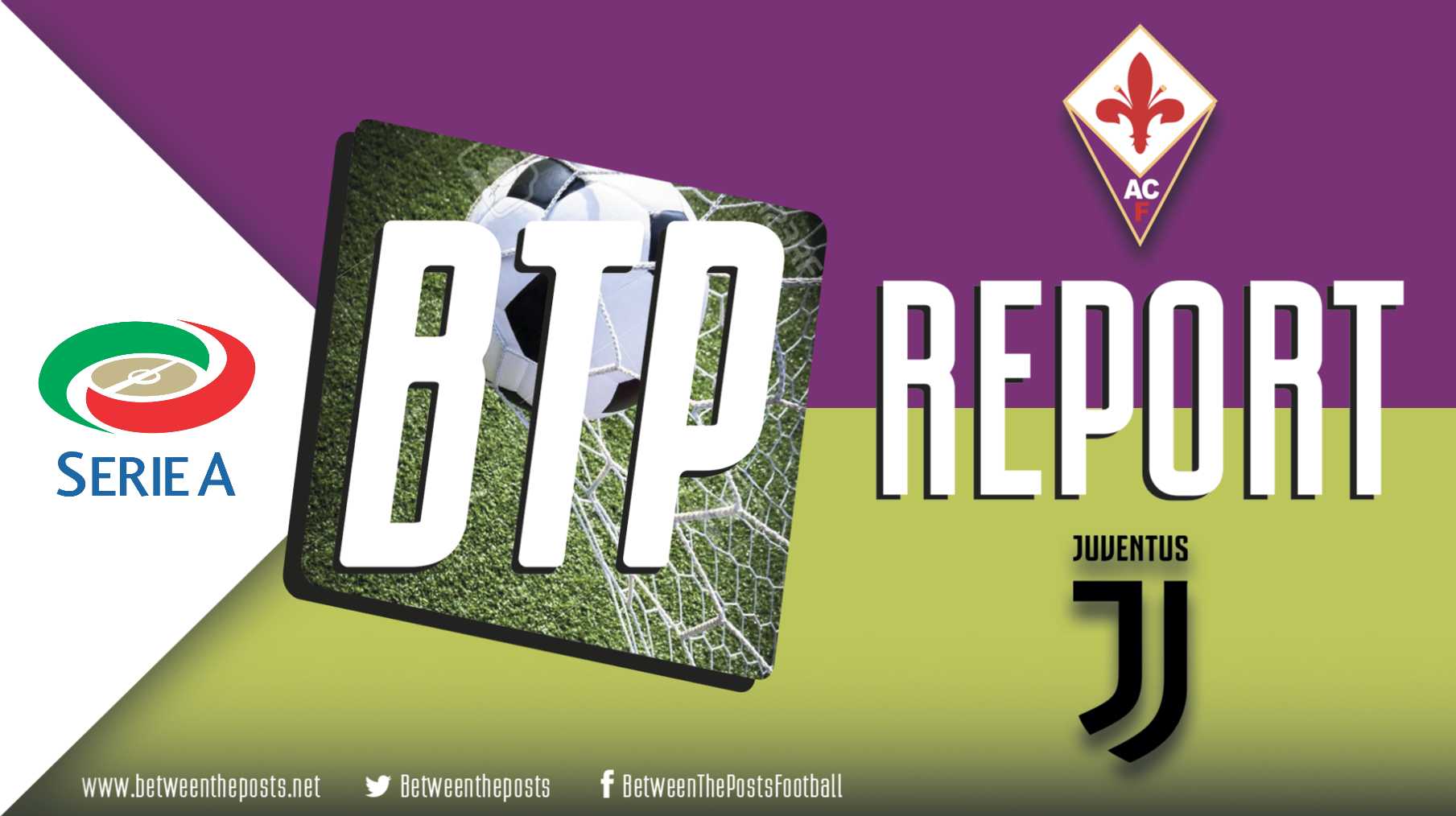