In a chaotic match, Atalanta Bergamo was very strong with their high and midfield press which nullified Sassuolo for most parts of the match, as the hosts could not find alternatives to a well-oiled, machine-like Atalanta.

Sassuolo’s manager Roberto De Zerbi made a string of changes to his Sassuolo side following the 3-1 defeat against Roma. Sassuolo also managed ust one win in their previous five encounters. There were three changes to his backline with Rogério, Giangiacomo Magnani and Pol Lirola all coming in. As well as the backline, there were also three changes in midfield with Stefano Sensi, Manuel Locatelli and Alfred Duncan forming the three-chain. In attack, just Domenico Berardi kept his place with Alessandro Matri playing a central role and Federico Di Francesco on the left.

European hopefuls Atalanta Bergamo were excellent in their previous encounter against Juventus, and as expected deployed a 3-4-1-2 formation, with three changes being made. José Palomino and Rafael Tolói replaced Berat Djimsiti and Andrea Masiello in defense with Musa Barrow getting the nod ahead of Josip Iličić in the attack. 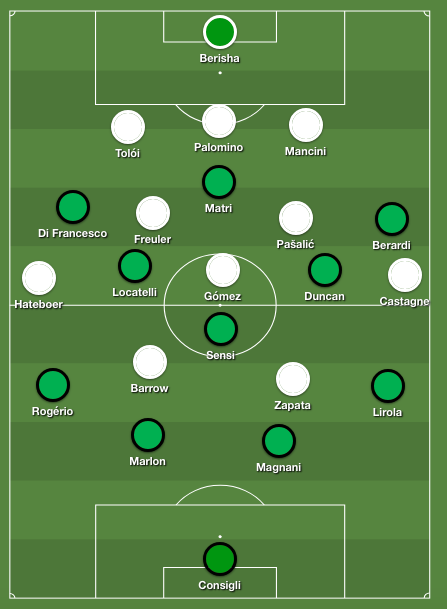 A key feature of Sassuolo’s ball circulation is enabling the ball-holder to have open passing lanes in close proximity of the ball. Therefore, it is crucial to limit their ability to form triangles around the ball, which Atalanta achieved through their excellent pressing game.

They did so by pressing very aggressively against Sassuolo, using heavy man-marking when Sassuolo was building up. This allowed them to seek quick and constant access to the opponents’ build-up. With every opponent in the area covered, blocking the passing options and thus compressing the area for Sassuolo to play in, making it difficult for defenders to find a pass forward.

This was helped by Atalanta’s reactive midfield shape, who often matched Sassuolo’s midfielders man-for-man. Remo Freuler would move up and press against Manuel Locatelli while Alejandro Gómez covered Stefano Sensi. Hans Hateboer pushed high to close down Rogério with the ball-near forward applying pressure on the ball-holding center-back. If the ball was funnelled down the left-hand-side – which was quite often the case – Mario Pašalić would cover the center, starting in a strong position to press or retreat if a long ball was played.

Of course, when an opponent uses man-marking, this can be manipulated by the vast ways of dismarking movements. Sassuolo did not react to the pressure that way, meaning the player on the ball had few passing options throughout these situations.

Furthermore, Atalanta profited from forcing the ball into strategically weaker areas of the pitch whilst maintaining access to the ball with a good organisation. This pressing scheme of the away side nullified the potential for short combinations, preventing the hosts building up effectively by forcing meaningful long balls into depth which lacked a supporting structure. For that reason, Atalanta sustained longer periods of possession spells, controlling the tempo and spending more time in the build-up when they collected the loose balls from Sassuolo’s long balls. They would look to continue to play the ball vertically until the opportunity arose for a penetrative dribble or pass into the next line.

The intensity was reduced shortly before half-time as the away side begun to drop off. The influence of their pressing early on was clear  as it gave them early superiority over their opponents and stopped them building up any meaningful possession play.

Sassuolo‘s 4-5-1 formation against the ball

Sassuolo lined-up on paper as a 4-3-3 formation, but due to the asymmetry of their midfield, spent more time in a 4-5-1 / 4-4-2 shape against the ball, which displayed strong central control. Against the back three of Tolói, Palomino and Mancini, the hosts were very passive in pressing the first line, instead focusing on holding central positions. This quite often allowed Atalanta to circulate easily across their backline with a three-versus-one advantage against the isolated Alessandro Matri.

Depending on the balls location, Duncan would at times leave the midfield line to apply pressure. This created a 4-4-2 formation with Sensi and Locatelli forming a double pivot flanked by Federico Di Francesco and Domenico Berardi.

Since Sassuolo were more content to defend in a compact block, they prevented Atalanta from using vertical combinations from the first line. Thanks to Sassuolo‘ defensive scheme, Gómez would often move out of his nominal position as a number ten and closer to the ball. In this way, Gómez managed to move on his markers blind-side to receive the ball in dangerous positions inside Sassuolo’s defensive shape from time to time. This was usually complemented by a run from Musa Barrow or Duván Zapata in-behind the last line.

Quite often, Atalanta formed effective triangles on the flanks, especially down the left-hand side with Timothy Castagne pushing high on the outside, Pašalić dropping a bit deeper and Gómez moving into the halfspace.

In theory, this support around the ball aided for quick combination scenes with strong support angles to progress. However, Sassuolo quite often shifted heavily to said flank and prevented progression on the wings. This was achieved with the excellent Duncan maintaining his defensive orientation by following the movements into wider positions, blocking the pass back inside and Pol Lirola maintaining access to press Castagne. Therefore, Atalanta was forced re-circulate across the backline with no means of a breakthrough.

In the entire first half, this resulted in two goals for Atalanta, who were constantly the better side and created better and more chances. Sassuolo could not muster any offense, barring one big chance for Matri after a deflected counterattack.

Sassuolo’s increased desperation to score due to the scoreline saw their midfield much more aggressive in their attacking movements. Duncan especially would push into depth both in pressing and in possession. The dynamic midfielder would directly attack the right side of Atalanta’s defensive lines with runs through the halfspace  If you divide the field in five vertical lanes, the halfspaces are the lanes that are not on the wing and not in the center. Because there is no touchline like on the wing, players have freedom to go everywhere. But this zone often is not as well-defended as the very center. This makes it a very valuable offensive zone to play in and a lot of chances are created by passes or dribbles from the halfspace. to put increased pressure on the away sides backline, aiming at creating better connections in the final third.

The one-third of the pitch that is closest to the opposition’s goal.

Since they were behind, Sassuolo sought quicker access in high aggressive pressing and did so with the wide players staying high, and the ball-near midfielder breaking the lines to join the pressing, taking every opportunity to engage with the away sides back-three. Although this allowed the hosts to impose themselves on Atalanta’s build-up, the inevitably meant that if the press was broken, there were spaces to exploit due to the hosts’ compactness beginning to decrease, despite Sensi’s clever positional reactions to players moving out of positions.

Despite the final onslaught, It was not all plain-sailing. Atalanta boasted their superioity in front of goal by scoring four more goals, with a special mention the excellent Josip Iličić who scored a hattrick in just 18 minutes. However, Sassuolo had a number of promising moments throughout the match which included Duncan scoring a brace.

Gasperini’s Atalanta side secured a convincing victory that moves them up to eighth place, just two points off of Roma in the European places. The away side was well structured in their very well-oiled high and midfield press and ultimately much more clinical when the chances arose.

As for Sassuolo, the manner of the defeat is a massive blow, however, they must be scratching their head asking how they conceded such goals despite a relatively good performance. The away side was too strong in the final third, and the hosts were quite passive against the ball at times but there are certainly signs of an exciting teams prospering under Roberto De Zerbi.

Use arrows to scroll through all available plots.