Valencia broke a long lull in play with a Guedes goal, creating a glut of transition opportunities that Madrid survived until the end of the first half. The Valencian onslaught continued after the restart and Madrid countered with a repetitive crossing approach that failed to pay off. Garay secured the three points late in the game before Benzema obtained a consolation prize in the 93rd minute.

This season, Valencia have been one of the best examples of the statistical concept of regression to the mean. In any event where a certain factor of luck is involved, like football, outcomes that differ from what one would expect based on underlying statistics are not sustainable over long periods of time. When a team starts scoring or conceding goals again in a way that is more suitable to their underlying statistics, this is an example of ‘regression to the mean’, as the unexpected results do not occur any longer.  They started off their campaign on a terrible finishing run, with strikers like Rodrigo Moreno missing chance after chance. This put them fifteenth in the league – four points off the relegation zone – on the fifteenth matchday, greatly jeopardizing head coach Marcelino’s job. But the board showed patience and, eventually, the results started to match their high net expected goals The amount of goals a team is expected to score based on the quality of the shots they take. – which was good enough for fifth best in LaLiga come March.

Coming into the 30th matchday against Real Madrid, they sat in seventh place with a game in hand, only four points off fourth-placed Getafe. Yet, still, there is statistical evidence of the scars from their horrendous cold streak from earlier in the season. Of the 41.3 expected goals they have accrued across the entirety of 2018/19, they have only scored 31, which is the sixth worst scoring record in the league.

Even when isolating their results to 2019, their goal production has not been overly spectacular, meaning that their turn in form has had a lot to do with their defense. This is represented by their streak of five home clean sheets prior to the Madrid game, where they conceded only 2.02 expected goals across that stretch, which is a spectacularly low amount.

Altogether, it meant Real Madrid were in for an even tougher game at Mestalla than usual. Not only were their opponents flying high at a venue that has always meant trouble for the All Whites, but Madrid have not been great this season. You may have heard a thing or two about their struggles this season, which have been too large for even Zinedine Zidane’s aura to ward off.

Zidane’s first two games back at the helm were wins, but both matches showed that there were limits to a cross-heavy approach and that better tactics were needed to solve some of the problems in defensive transition. Zidane decided to stick with his old method, however, as he had only coached two games up until this point. He selected Marco Asensio on the left wing, Lucas Vázquez on the right, and played his favorite midfield: Toni Kroos, Casemiro, and Luka Modrić.

Marcelino also declined to throw any curveballs. He went with his standard 4-4-2 formation, playing Geoffrey Kondogbia and Dani Parejo as central midfielders behind strikers Kevin Gameiro and Rodrigo.

For whatever reason, fans were denied the exciting, end-to-end encounter they anticipated in the first thirty minutes of the game. It seemed that both teams were excessively cautious, trying feel each other’s game plan out before making an aggressive move. Consequently, Real Madrid saw a lot of the ball against Valencia’s 4-4-2 medium block. A medium block refers to a team that retreats in their own half out of possession, generally only disrupting their opponents some way into their own half. 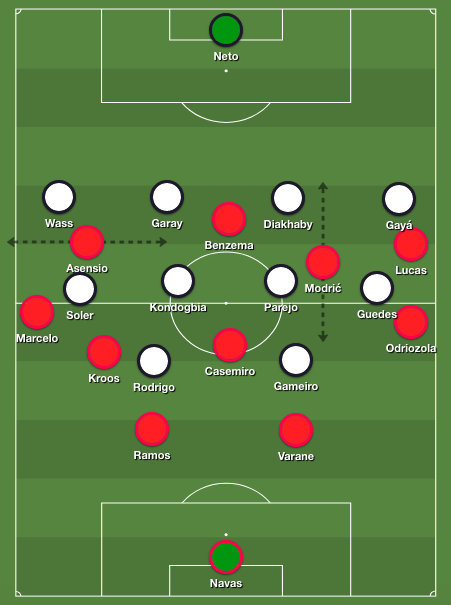 As one would expect from such an impressive defensive outfit, Valencia were generally well-organized. Rodrigo and Moreno cut off easy passes into central areas while the midfield four carefully covered vertical passing lanes. Nevertheless, Madrid still found ways to get into the final third. The one-third of the pitch that is closest to the opposition’s goal. The three-versus-two in the center of the park and the asymmetry of the Kroos-Casemiro-Modrić shape made it difficult for Valencia to shut down Madrid’s midfield.

Though Parejo paid close attention to Modrić, Kondogbia declined to follow Kroos deep into Madrid’s half. After patiently working the ball in triangles out wide, Casemiro was often accessed as the free man through lateral passes and Madrid could progress.

Real Madrid failed to take advantage of this. In the first ten minutes, play in Valencia’s half seemed rushed and too direct. Once Madrid settled down, they worked the ball into wide areas – especially down Vázquez and Álvaro Odriozola’s side – and tried to cross. It produced nothing, as Madrid only managed two speculative shots from outside the box and a wild Ramos header from a set piece.

Valencia spring into life on the counterattack

Every time Madrid lost the ball, Valencia tried to attack in earnest, but their passing from the back was horrendous. To make matters worse, the few counterattacks they did manage to string together failed to result in a shot.

It was clear that Valencia were exceedingly nervous and that they needed some kind of confidence boost to get them back on track. As fate would have it, they got just that in the 35th minute. Navas punched a corner that fell to Gonçalo Guedes, who played a one-two with Soler and scored before Madrid could organize themselves defensively.

The floodgates opened and a tsunami of white and black shirts poured forward every time Valencia won the ball back. If it were not for the brilliance of Raphaël Varane – and to a lesser extent, Sergio Ramos – Madrid would have surely conceded another before the end of the half. 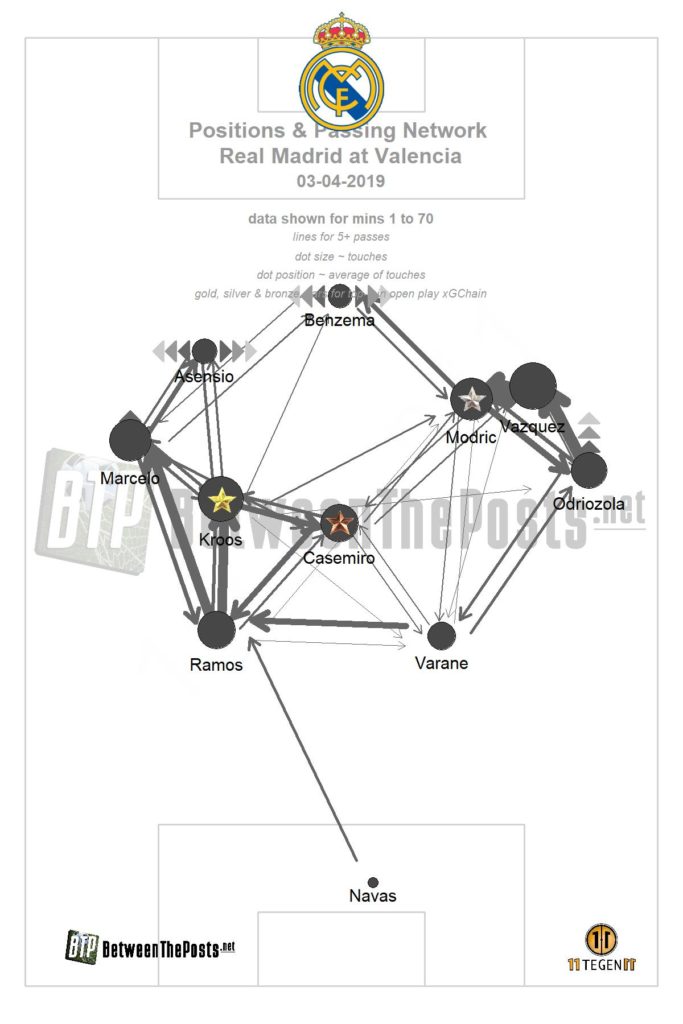 Zidane doubles down on his offensive strategy

One of the biggest criticisms of Zidane has always been that he relies too much on crossing. But that point has always felt a bit picky, since offensive production was rarely ever an issue in his two and a half seasons in charge of Real Madrid. Times are different now, though, and the critique feels more salient with the absence of Ronaldo and his threat in the box.

Lopetegui was not too dissimilar to Zidane in this respect. The former Spanish national team coach also created a possession-based, cross-heavy approach. But his side’s underlying offensive numbers in open play suffered, suggesting that a new offensive plan was needed. Fast forward all the way to the second Zidane era, and Madrid are back to square one, facing the same issue Lopetegui faced.

Against an impressive defensive unit in Valencia, the endless crossing rarely ever felt threatening. There were rare occasions where Odriozola’s speed and attempts at cutbacks created momentary excitement, but the lone presence of Karim Benzema in the box was relatively easy to deal with.

Zidane was undeterred, replacing Marco Asensio with Gareth Bale for a greater crossing threat on the left. He also brought on Isco for Kroos, which proved to speed up Madrid’s entry into the final third, but the one-dimensional style of penetration remained.

To make matters worse, Madrid’s fluid shape and unprepared buildup structure made it difficult to counterpress,  After losing possession, a team immediately moves towards the ball as a unit to regain possession, or at least slow down the pace of the counterattack. allowing for Valencia to continue to threaten in transition. There were numerous situations where the home side should have scored – most notably through Carlos Soler in the 52nd and 73rd minutes. 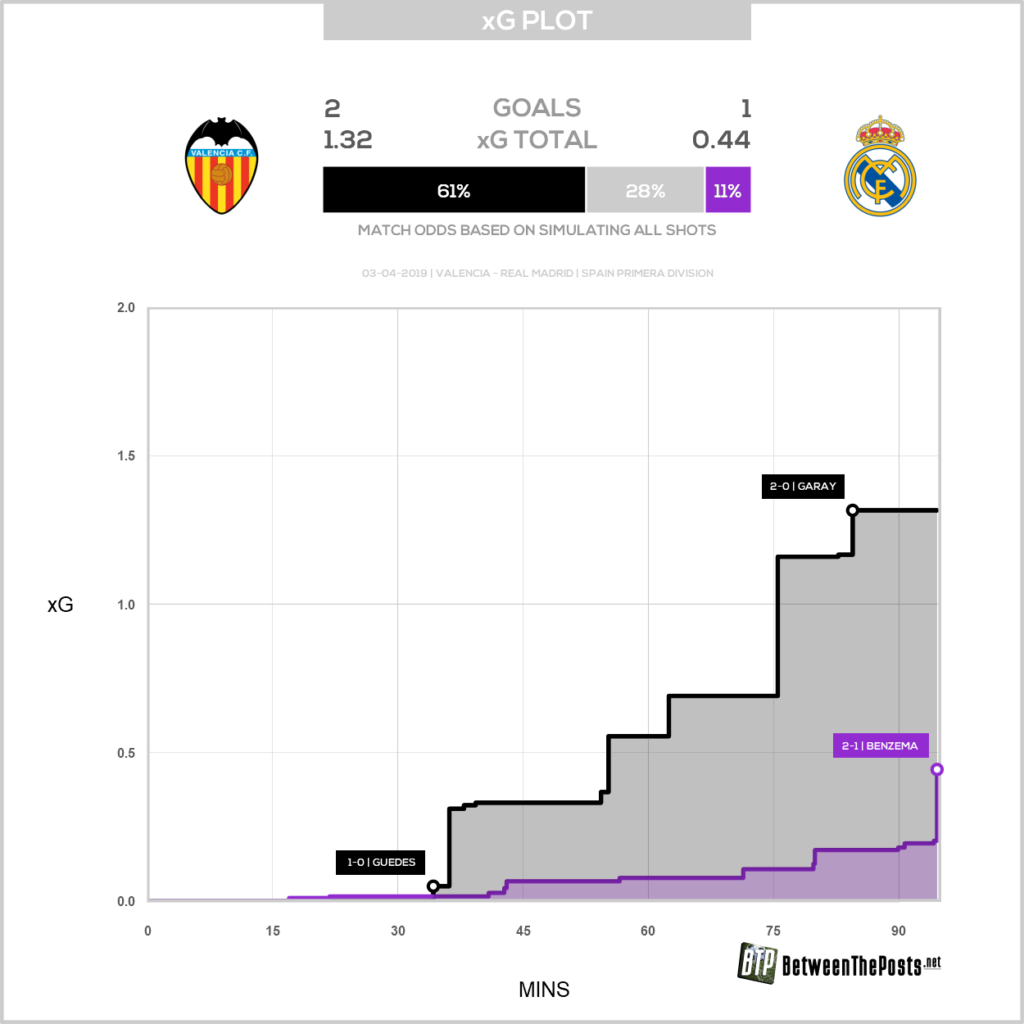 Valencia finally got their deserved second goal from a corner kick in the 83rd minute, when center-back Ezequiel Garay towered over Casemiro and dispatched an excellent delivery from Parejo.

Madrid, now desperate and with another body in the box – Mariano had come on for Vázquez only minutes earlier – crossed even more furiously and fired off speculative efforts from range. The consolation strike eventually came from Benzema, who converted a set piece in the last seconds of the game. Too little, too late, and Valencia deservedly kept the three points at Mestalla.

It is still early days for Zidane, meaning it is tough to tell exactly what his long-term vision is and how he will evolve tactically. That he must evolve is clear, however. The old issues in regard to the counterpress remain and a new one has arisen with the decreased potency of a crossing strategy. Many Madridistas hold out hope that a glut of new signings will solve these issues, but the hard truth is that this team will always struggle unless Madrid shore up their tactical fundamentals and develop a cohesive philosophy in the post-Ronaldo era.

It is the exact opposite for Valencia. Faith in Marcelino’s clear vision has resulted in a return to contention for the European spots and an uncontroversial win over Real Madrid. If they can keep up their impressive defensive work and squeeze more out of their forwards, it would not be a surprise to see them participate in next season’s Champions League qualifiers.

Use the arrows to scroll trough all available match plots. 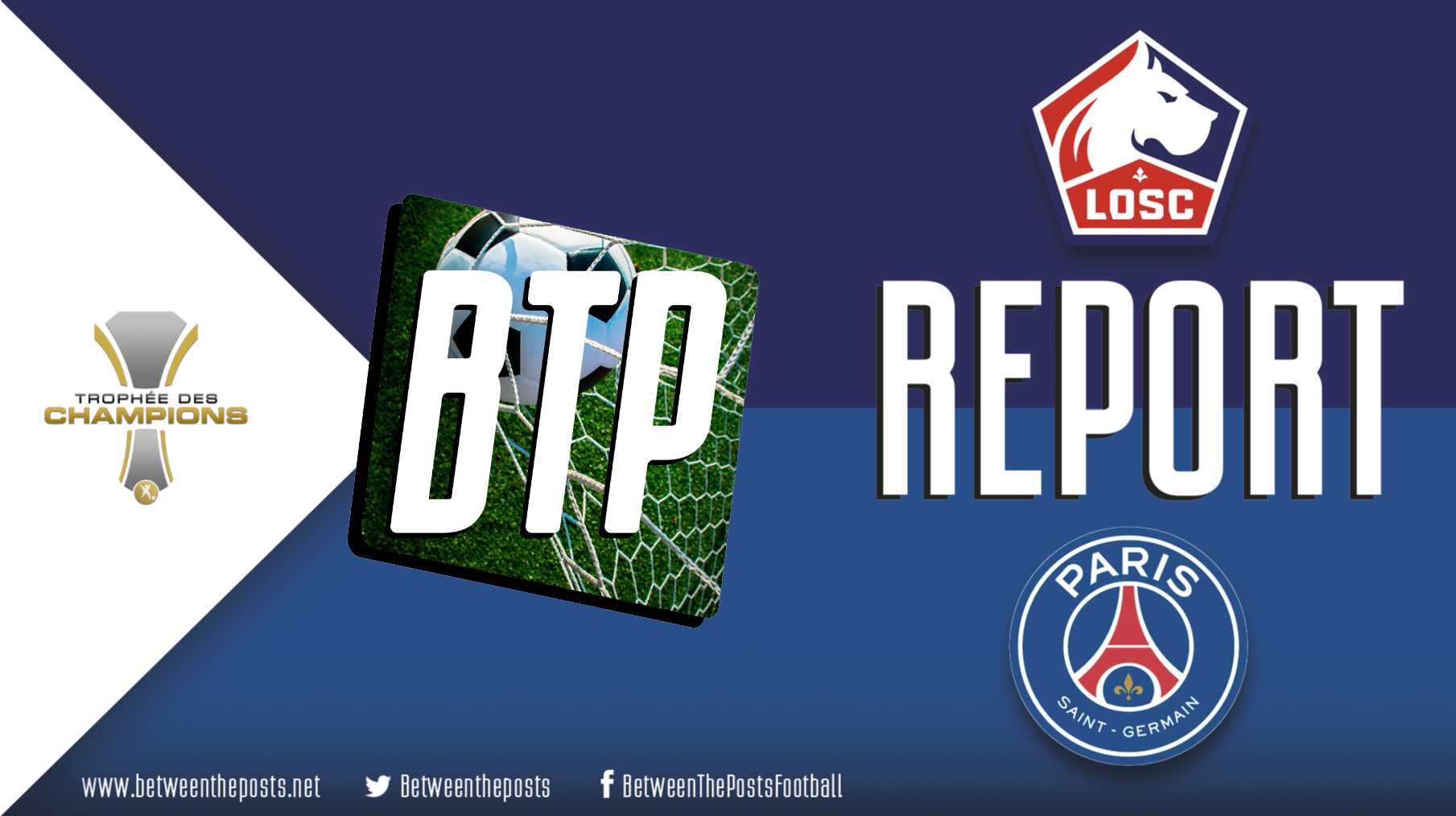 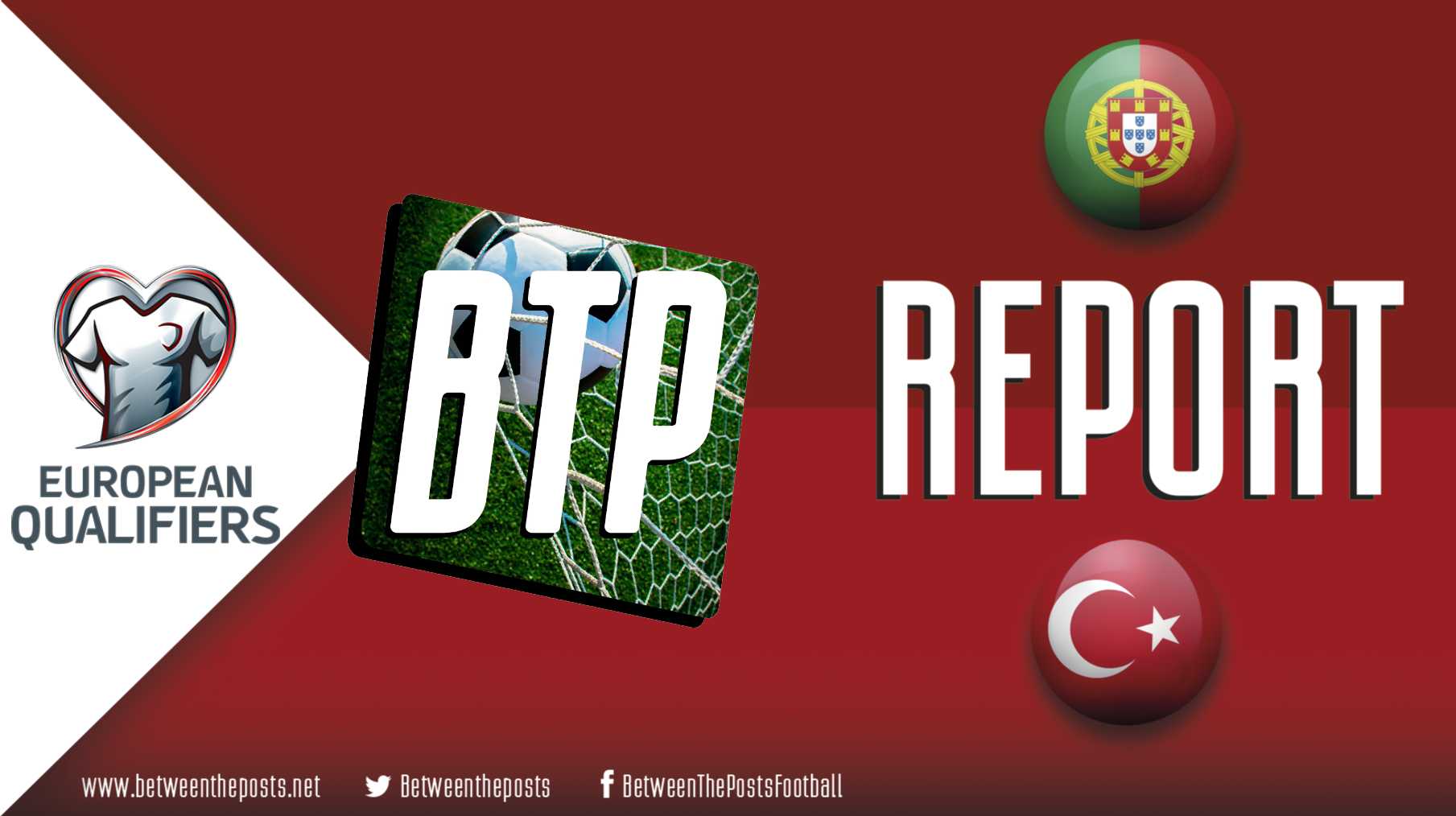 Portugal – Turkey: Portugal Progress To The Playoff Final Despite Second Half Scare (3-1)