After a close, uneventful first half, Villarreal shifted from a 4-2-3-1 to a 4-4-2 scheme and dominated an Atlético who still struggled to find good offensive mechanisms. The saves of Jan Oblak were vital to prevent a Villarreal victory.

Villarreal came into this match as the biggest expected goal underperformers in LaLiga, with only 6 goals to show for their chance total worth 11.3 expected goals.

Such underperformance resulted, for the most part, from the early season struggles of Gerard Moreno, Villarreal’s star striker. After an outstanding 2017-2018 season with Espanyol, Moreno still plays very well—drifting wide, dropping deep, linking up, getting into scoring positions—but his finishing constantly disappoints. Unfortunately, this means that Villarreal remains in the bottom half of the league table despite having one of the 5 biggest expected goal differences in the league.

As expected of Atlético, they are the strongest defense in LaLiga, both in terms of expected goals against (8) and actual goals against (4). Offensively, however, things haven’t gone so well. On an individual level, both Diego Costa and Antoine Griezmann have been in relatively poor form. On the collective level, it is hard not to feel that there is a bit of a contradiction between Simeone—an inherently conservative coach—and a very talented Atlético squad that has more offensive players than ever.

Despite this issue, the irregularity of Real Madrid and Barcelona this season opens the door for Atlético to fight strongly for the league title.

Lineups
For this game, Villarreal manager Javi Calleja decided to switch things up a bit. Instead of Villarreal’s usual 4-4-2 formation, he opted for a 4-2-3-1. Center-back Ramiro Funes Mori—who has put in a shift at defensive midfield over the past month due to teammates’ injuries—returned to his usual position to cover the absence of an injured Víctor Ruiz. Veteran Chilean midfielder Manuel Iturra took over the defensive midfield spot, forming a double pivot with Manu Trigueros. Behind striker Gerard Moreno were playmakers Santi Cazorla on the right and Pablo Fornals in the center, as well as winger Alfonso Pedraza on the left.

Atlético and Simeone went for their eternal 4-4-2 shape, albeit with some personnel changes. Talisman Diego Godín was left on the bench in favor of Lucas Hernández, who partnered up with Jose María Giménez. In midfield, Thomas Lemar was benched in favor of Thomas Partey, who formed a double pivot with Rodri Hernández. Finally, Saúl Ñíguez and Koke played the wide midfield roles while Nikola Kalinić substituted an injured Diego Costa up front.

Similar game plans cancelled each other out
Atlético and Villarreal espouse surprisingly similar game plans. In defense, they opt for a conservative low-to-mid block that absorbs some pressure and lures rivals into moving forward and leaving spaces behind them. Once they recover the ball from the opponent, both teams launch quick attacking transitions.

However, this strategy struggles to work as intended when facing an equally conservative rival, and that is exactly what happened between Atlético and Villarreal. Both teams struggled at finding spaces behind the conservative defensive lines of their opponent and were forced to create attacks through longer possessions, a weaker aspect of their play. This led to an uneventful first half in which both teams struggled to consistently produce good chances.

Atlético would often use long balls from goalkeeper Jan Oblak and the center backs to try to reach an isolated Kalinić. He was constantly outmanned and dispossessed by Villarreal center backs and too far away to properly hold up play and link up with teammates. As such, Atlético often struggled at progressing through the middle, even if Sául tried to act as a secondary channel for direct play.

Villarreal’s conservative defense forced Atlético to move forward through the wings and predictably send crosses into the box (seventeen crosses during the first half). These attempts were constantly cleared by a focused Villarreal defense, who dominated in the air thanks to goalkeeper Sergio Asenjo and center back Álvaro Ruiz.

Villarreal showcased a richer attack than their rivals and a better structure in possession. Iturra would stay back to guard against Atlético’s counter-attacks, giving playmakers Trigueros and Fornals freedom to roam across the pitch. This allowed them to constantly offer good passing outlets when Villarreal built up from the back, and then link up with the attackers.

Striker Moreno drifted to the right to make well-timed runs past Lucas Hernández and Filipe Luis. On the opposite wing, Pedraza tried to beat a veteran Juanfran through sheer dribbling or with the help of his teammate, left back Jaume Costa. Despite Villarreal’s efforts, Atletico’s defense cleared most of the incoming danger.

Atlético’s changes mostly ineffective, but the goal still arrived
For the second half, Simeone prepared some adjustments. Kalinić and Rodri were substituted for Lemar and Ángel Correa. This reconfigured Atletico’s midfield and forward lines. Thomas and Sául would form the new double pivot, Koke stayed on the left while Correa played on the right. Up front, Lemar would play behind Griezmann, who would now act as his team’s striker.

However, it is hard to say these changes had positive results, as Griezmann looked even more isolated and unable to link up with teammates. The absence of Rodri always deteriorates Atlético’s possession and buildup structure, which makes it harder to reach a Griezmann who now played as a lone striker.

Fortunately for Atlético, they often don’t need to produce many good chances to score. A set piece, a bad clearance by Funes Mori, a tangle between center back Álvaro and goalkeeper Asenjo, and a timely header by Filipe Luis finally got Atlético a goal in the 51st minute.

Villarreal reacts and Oblak holds down the fort
Ten minutes after Atlético’s goal, Calleja changed the game plan. Iturra was substituted for striker Carlos Bacca, and Villarreal shifted to their usual 4-4-2. Manu Trigueros and Santi Cazorla formed a very creative double pivot, while Fornals moved over to the right. This change made Villarreal a more direct team. They started finding more spaces on the counter, with Fornals, Trigueros and Cazorla launching tense through balls into space for Moreno, Bacca and Pedraza. 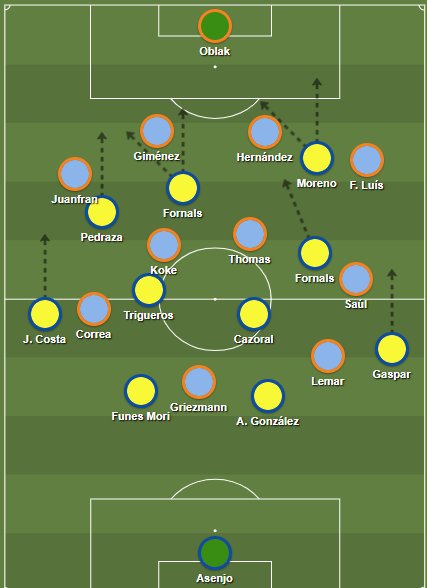 Second half. Villarreal’s 4-4-2 structure in possession against Atlético’s mid-block.

This strategy quickly paid off. A run into space and a low cross by Bacca led to a series of bounces in Atlético’s box, and right back Mario Gaspar took advantage of the confusion to sneak up behind Filipe Luis and tie the game in the 65th minute.

More Villarreal dominance followed in the final half hour. Atlético could not sit back and wait anymore, but their timid attempts at building up possessions or counter-attacking were stopped by Villarreal’s solid defensive structure. Once again, Atlético’s main means of attacking were crosses and set pieces, with only Correa providing more dynamism, speed and dribbling.

On the other hand, Villareal’s playmakers continued their festival of through balls to pick off Atlético on the counter. This strategy would have worked if it were not for a meddling Oblak, who proved once again why he is one of the best shot-stoppers in the world.

For his first miracle save, Oblak stopped a big chance from Moreno by quickly closing down his shooting space and angles, and then immediately stopped a second shot by Fornals. For a spectacular second miracle save, Oblak slapped the ball away from Bacca as he was losing his balance, about to be dribbled past by the Colombian striker.

Takeaways
Villarreal is a victim of the random nature of football results. They sit at the bottom five of the league table, but they certainly don’t play like a bottom five side. Fans might be getting increasingly impatient, but despite the results it is hard to argue that Villarreal should radically change their approach (or their coach). The team’s underlying numbers are still good, and if Gerard Moreno can get out of his bad streak, things might drastically improve for Villarreal. However, this game shows that perhaps Villarreal and Calleja are better off sticking to their traditional 4-4-2. It allows Villarreal to more easily launch attacking transitions and optimize for their outstanding through ball generators: Fornals, Cazorla and Trigueros.

Even though they were dominated, it is a bit hard to give a truly negative conclusion about Atlético. It is not the first nor the last time that Simeone’s side are dominated by an opponent that is inferior on paper. This is a natural result of Atlético’s conservative style, and they are used to surviving through such situations. However, the lack of offensive mechanisms on the counter is worrying. This game is a reminder that Griezmann struggles when playing as a lone striker and should ideally be partnered up with a target man like Costa or Kalinić. 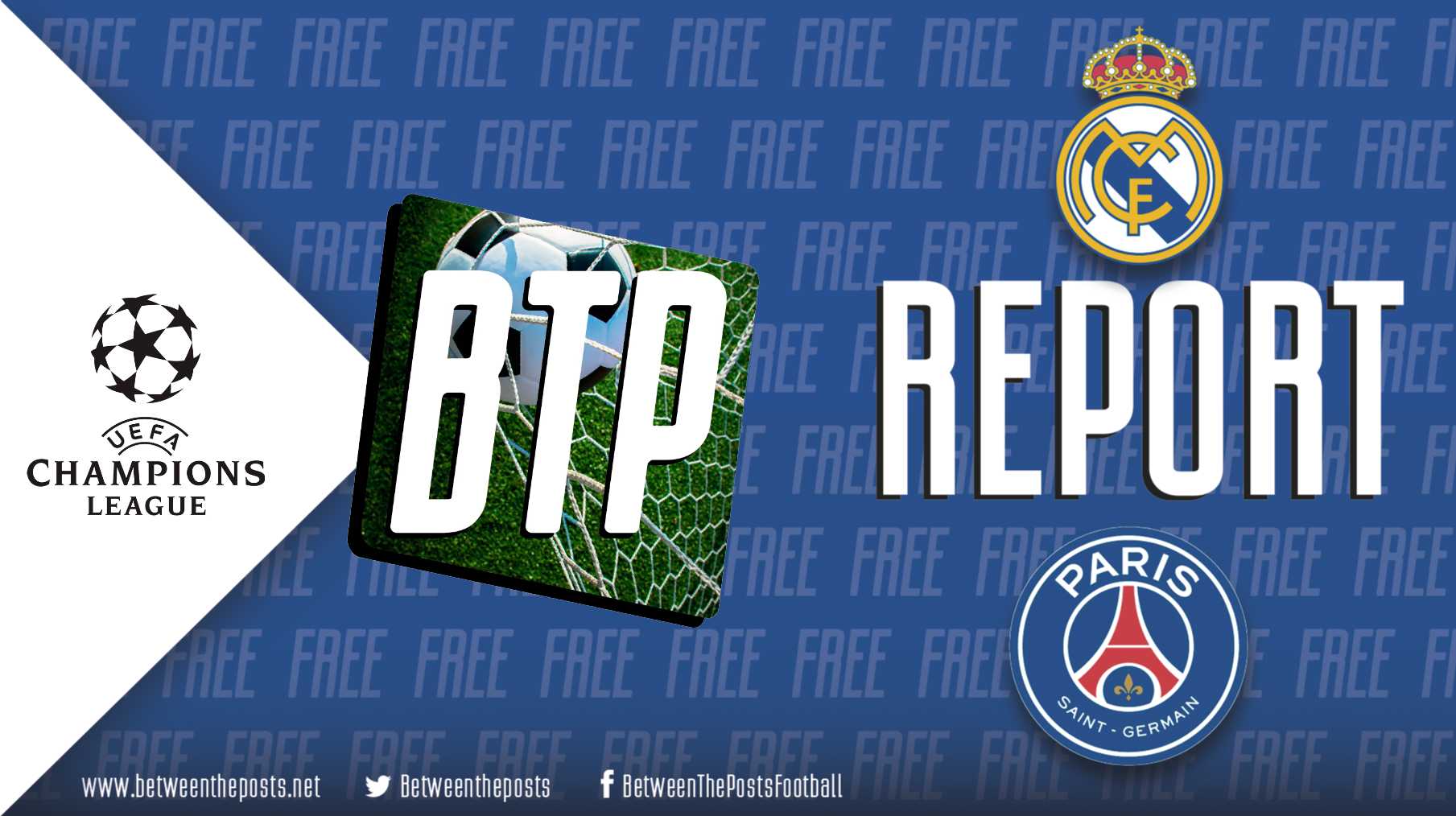