Villarreal came into the game acknowledging their status as the underdogs, but there was never a hint of fear on the part of the Spaniards. Instead, they respected the strengths of their opponent and prepared a solid game plan, which they partnered with masterful execution to record a famous victory to take to Munich.

In the world of football, there are few backhanded compliments that are as confusing as ‘serial Europa League champion’. While Europe’s second competition satisfies the need for trophies and brings tangible rewards to its winners, it does not garner as much respect as winning the Champions League does. For all his tremendous success in the Europa League, it is evident that Unai Emery has his eyes on the continent’s biggest prize. That made the game against Julian Nagelsmann’s Bayern Munich a monumental occasion for the Spanish outfit, and perhaps a bigger one for their manager.

Emery stuck with the 4-4-2 shape as seen against Juventus, with the lone change being Juan Foyth replacing Serge Aurier at right back. The midfield boasted a nice balance of control and creativity, as Étienne Capoue was flanked by Daniel Parejo and Francis Coquelin. The dangerous Arnaut Danjuma led the line, and was supported by Gerard Moreno and Giovani Lo Celso.

Boosted by the return of rampaging left back Alphonso Davies, Nagelsmann went back to the 4-2-3-1 shape on paper, which has frequently turned into a 3-1-4-2 shape in possession. the main changes for Bayern came in defense, where Dayot Upamecano partnered Lucas Hernández at center-back. Davies was the other big change, whereas the slightly out of form Leroy Sané was omitted in favor of Serge Gnabry.

It was apparent going into this game that Nagelsmann was aware of Danjuma’s threat. The question was about how Emery would unleash his striker, and it turned out that the answer did not involve too many complications.

Firstly, Villarreal built up with deep fullbacks and a ‘box’ in midfield, from where the goalkeeper often went long. Another variation was the fullbacks and central midfielders coming into play to free up the center-backs (particularly Torres) to go long, with many of the passes targeting Gerard Moreno on the right. A third option was to play vertically through the fullbacks since they were usually free, with the fullbacks playing a pass inside before receiving on the overlap and cutting it back for the strikers. This was seen most prominently in the second half from left back Pervis Estupiñán.

During these scenes, Danjuma split to play on the outside of Upamecano (the far side center-back), while Moreno received immediate support from Giovani Lo Celso and Étienne Capoue. Foyth was also involved in quick rotations down the wing to find the third man, who received the pass that advanced play and triggered forward runs from the rest of the team. 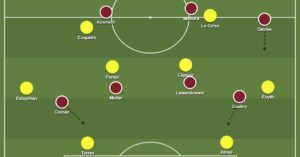 Bayern’s set up versus the Villarreal buildup.

These rotations were made possible by Bayern’s pressing structure, wherein the defensive line could seem slightly disconnected from the rest of the team. The wingers – Gnabry and Kingsley Coman – pressed the center-backs from the outside, while Robert Lewandowski and Thomas Müller screened against passes into the midfielders. This often left the fullbacks free, which is precisely what allowed them to come into the picture and free the center-backs as described above.

Villarreal remained calm in the face of pressure and were smart about taking up good positions in midfield, regardless of whether they were on the wing or in midfield.

Buildup to the goal: Lo Celso the literal definition of between the lines here. No one picks him up and Parejo accesses him with one pass triggering Danjuma's diagonal run from out wide into the box #VILBAY pic.twitter.com/KpZYQ3ze2g

While they didn’t have sustained spells of possession, they looked confident in and out of possession and were able to threaten when they did push into Bayern territory. One-touch passing against a seemingly confused Bayern backline came easily to the hosts, and this was on display for both Danjuma and Coquelin’s goals (the latter was ruled out for offside). Aiding the midfield was the center-back duo of Raúl Albiol and Pau Torres, who pushed up behind the midfield to act as a safe outlet for recycling possession.

It is difficult to truly state the effectiveness of Villarreal’s low block – the best way to express it would be to highlight the fact that Bayern finished without a shot on target in the first half. Curiously, the Yellow Submarines did not engage in high level planning for this; they merely executed their plan to perfection. 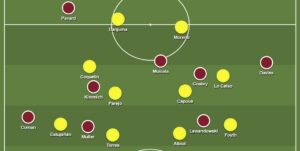 Villarreal’s defensive block – the key was in how connected they were at the back, as well as the constant checks carried out by the two center-backs.

With Parejo and Torres constantly adjusting the height of the midfield and defensive lines respectively, the hosts remained defensively connected and rotated on time. They flooded the midfield with bodies to render Kimmich ineffective, particularly since the German was the only one on the team capable of creating from deep. Moreover, with Lewandowski and Müller now inaccessible, Bayern had no choice but to pass to their wide players. This immediately saw either the Villarreal wide midfielder or fullback rotate to halt forward progress, while options inside the block were closed off and the strikers were ready to pounce on errant passes.

With both central and wide sources of creativity stifled, it was little surprise that Bayern made very little headway during this period. Nagelsmann urgently needed to shuffle his cards for the second half, lest Bayern continue to the bitter end with their fruitless crossing endeavors.

Aiding Villarreal was the fact that Bayern constantly looked for vertical options in buildup, whereas the hosts merely sat off them in a 4-4-2 block that could efficiently switch to either flank. The issue with having only Kimmich as the controller is that tempo control becomes a big issue – Bayern were constantly losing the ball in a matter of 2-3 passes, rather than holding on to it and slowly carving Villarreal apart. 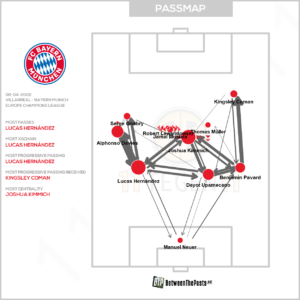 Because of the way Emery’s team stayed connected on defense, it was not possible for Bayern to pin them in their half by asking their center-backs to dribble out. This situation eventually prompted a double change from Nagelsmann, with Leroy Sané replacing Müller and Leon Goretzka coming on in place of Serge Gnabry.

The change would almost have been for naught, as seconds later Neuer gathered the ball near the halfway line and hit a pass straight to Moreno. The striker was unable to score into an empty net from his own half, which marked a second miss after his first shot smacked off the upright a few minutes earlier. Although xG would have marked both as low scoring opportunities, the fact remains that Villarreal threatened Bayern frequently – at least much than Bayern threatened the hosts.

The remainder of the game was played at a frenetic pace, though neither side had clear scoring opportunities. To begin the second half, it seemed like Bayern wanted to press more aggressively, but their inability to keep possession worked against them as it became a battle of attrition in midfield. A late change from Emery saw substitutions up front and at right back, with Samuel Chukwueze coming on to run at the Bayern defenders to add some extra danger. Ultimately, Villarreal were the one to rue their missed opportunities – the game is set up tantalizingly for the return leg at the Allianz Arena. 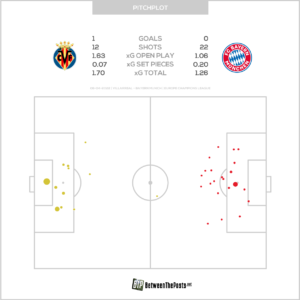 Even with such a significant result, Villarreal should feel some remorse – they were the better side throughout the game and needed a bigger lead to take back to Munich. It is difficult to think that Nagelsmann would not change things around more for the next game, and it is possible that the favorite does end up going through in this fascinatingly poised encounter. 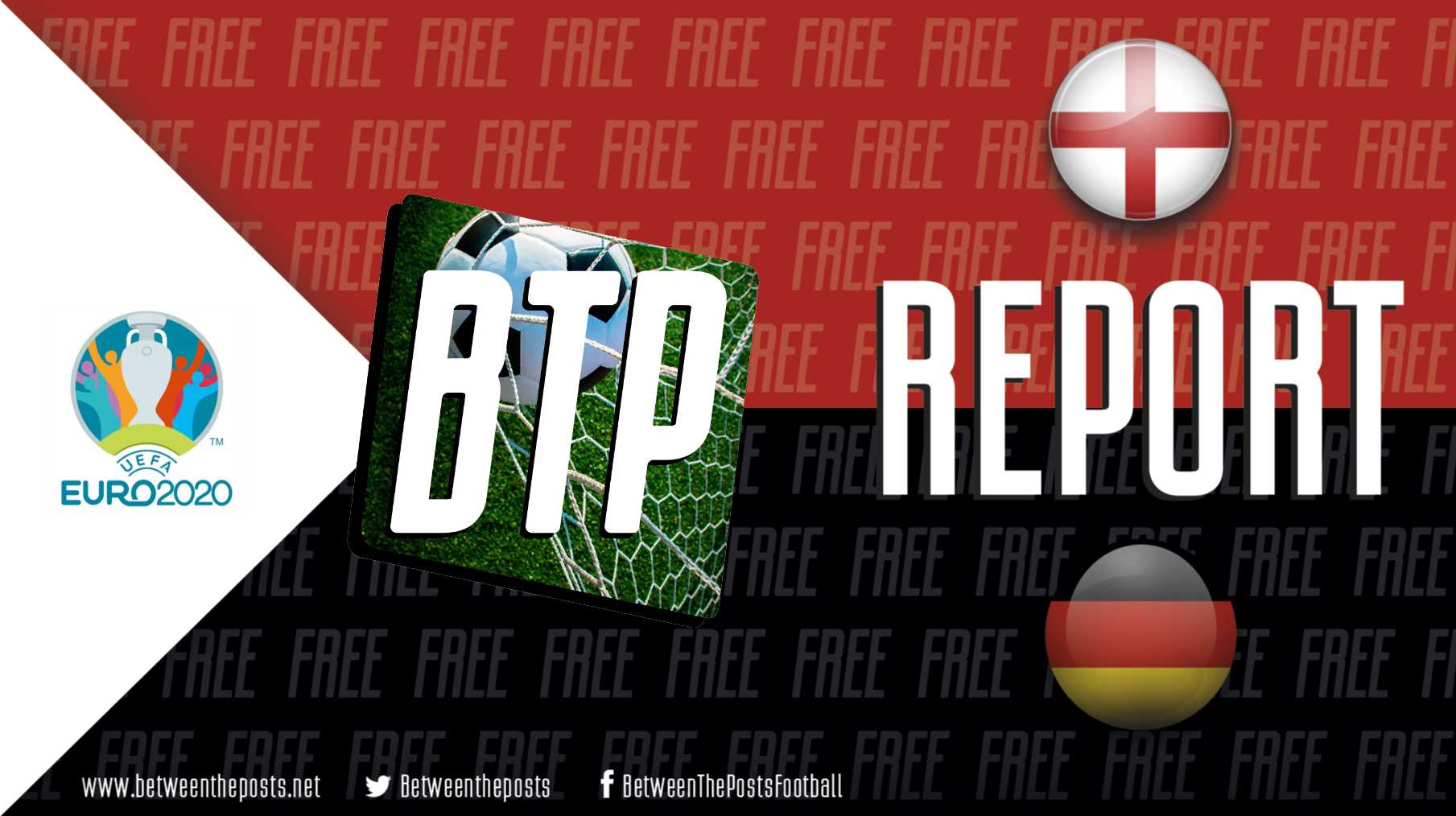