In their 3-5-2 formation, there were a large amount of tactical details that Betis tried to use to their advantage against Villarreal, without too much avail. After equalizing early in the second half, Betis allowed for a Villarreal goal fest, as manager Rubi will be left scratching his head at some of the meek defending on display.

Two teams with a tally of eight points went into this Friday evening LaLiga game, as Villarreal found themselves at eighth place and Betis were ninth. According to our stats page, these teams rank second and fourth in terms of expected goals The amount of goals a team is expected to score based on the quality of the shots they take. created from open play. With the caveat that only six games have been played so far this season in Spain, that kind of stats promised an attacking game.

In broad strokes, these teams share the same philosophy when it comes to their tactical approach to the game. Both Villarreal and Betis try to build from the back with short passing, while incidentally pressing, without being overly ideological about it.

Villarreal’s formation of choice was 4-2-3-1, as the central midfield pairing André-Frank Zambo Anguissa – Vicente Iborra was topped off with captain Santi Cazorla. The captain has a free role from the number ten position, roaming freely across the pitch, helping out in the early stages of buildup as well as filling in spaces in the final third The one-third of the pitch that is closest to the opposition’s goal. when needed.

Betis were without their injured star player Nabil Fekir, an offensive superstar that somehow ended up playing for a Spanish mid-table team at the age of 26. In his absence, manager Rubi positioned his team in a quite peculiar 3-5-2 shape, one that deserves further examining down the line.

How to define Betis’ formation?

There were a couple of interesting quirks in Betis’ tactical patterns that made it hard to label them with one formation, even though 3-5-2 probably comes closest.

First of all, there was the role of Joaquín. Just like Cazorla at Villarreal, the Betis captain had a free role as the most advanced midfielder, the main difference being that he mostly stayed in an offensive position. Most often, he positioned himself in the right halfspace, If you divide the field in five vertical lanes, the halfspaces are the lanes that are not on the wing and not in the center. Because there is no touchline like on the wing, players have the freedom to go everywhere. But this zone often is not as well-defended as the very center. This makes it a very valuable offensive zone to play in and a lot of chances are created by passes or dribbles from the halfspace. while Sergio Canales and William Carvalho played as flat midfield duo, meaning Villarreal had to deal with a lot of asymmetry. This naturally caused Betis’ right back Emerson to play more conservatively than left back Álex Moreno. 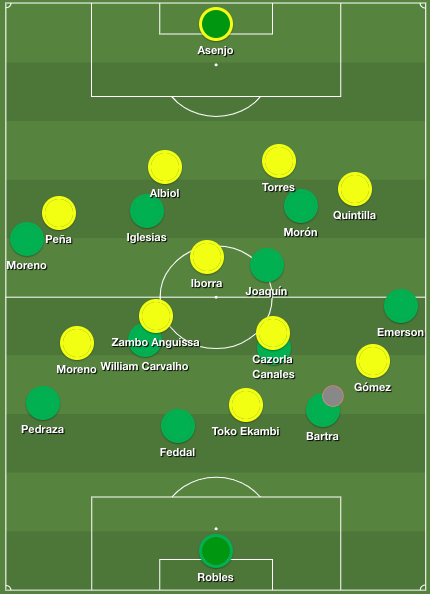 Incidentally, Betis commenced the play with two central defenders, as Moreno pushed up so far on the left wing that he actually became a left winger. Whenever that happened, left center-back Alfonso Pedraza started to act like a traditional left back. Moreno also had license to come inside and act as a second number ten alongside Joaquín, which is a very unusual role for a left back. That caused Betis to play in a 4-2-2-2 box shape at times, with the fullbacks providing the necessary width.

Neither team takes the initiative

Whenever Betis started to build up, their two central midfielders Carvalho and Canales would be fiercely marked by Cazorla and Zambo-Anguissa, meaning building play through the middle became hard. Most often, Betis were forced to the right, where Villarreal were able to shift over and prevent them from playing forwards. 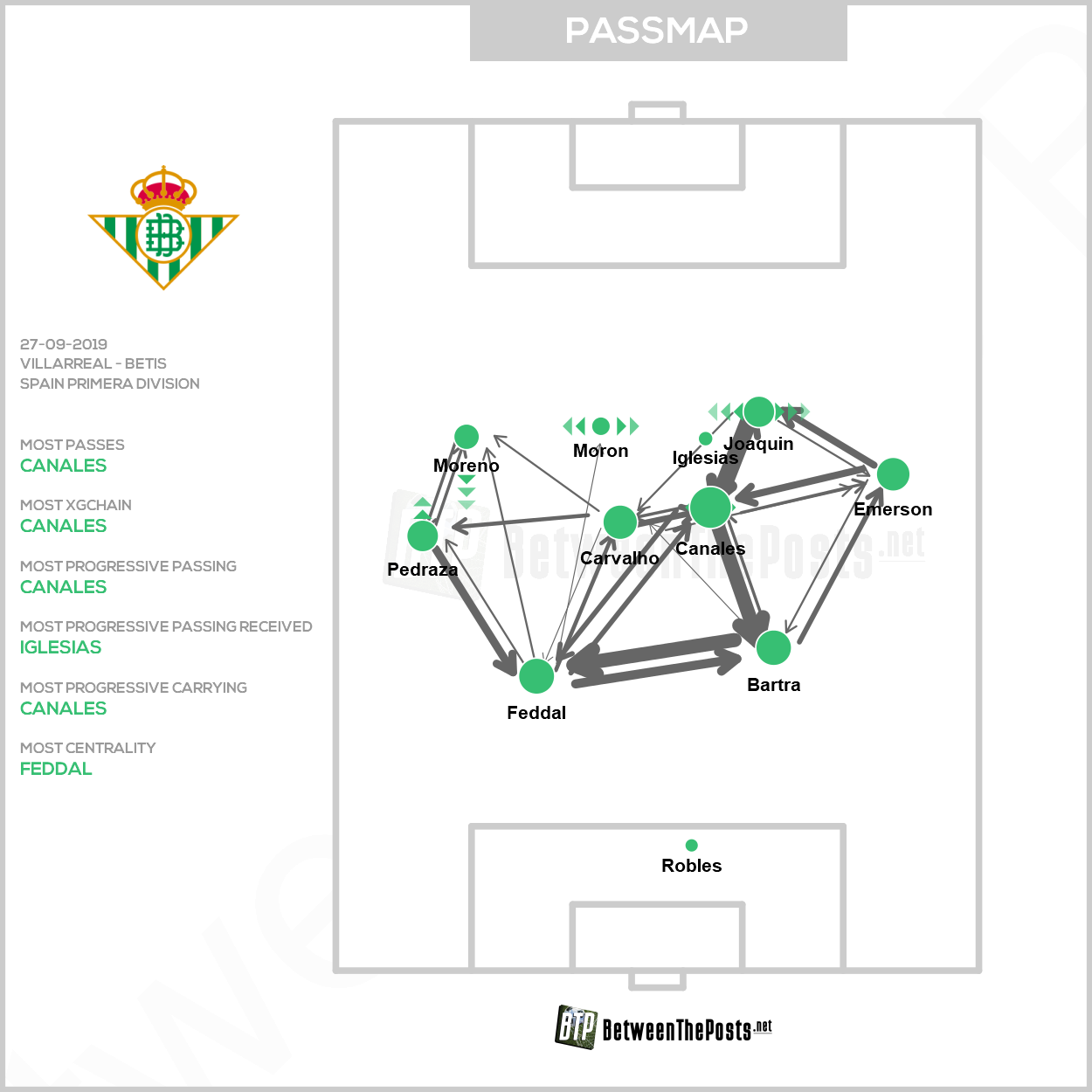 During Villarreal’s buildup, which started from a 4-2-3-1 formation, Betis formed a zonal 4-4-2 shape, attempting to press from a medium-to-high block. A medium block refers to a team that retreats in their own half out of possession, generally only disrupting their opponents some way into their own half. A high block refers to a team that regularly leaves their own half out of possession, to disrupt their opponents far into the attacking half. A medium-high block is well… in between these two variants. Whenever Villarreal were able to play through this – which was more often than Betis – Rubi’s team formed a 5-3-2 organization to protect their penalty area, with Moreno slotting back as left back and Joaquín becoming a right central midfielder again.

Villarreal had some asymmetries going on in their attacking system as well when they were attacking, as right winger Gérard Moreno – a striker by nature – often sought space inside and acted as a second striker. Their offensive play was most defined by Cazorla’s roaming however, as it is quite helpful to have a player on the field that rarely loses the ball and almost always plays forward when given the possibility.

The Villarreal captain was at the heart of the first big chance of the match, as in the tenth minute, he had the ball in the left halfspace and spotted a run from right back Peña, who made use of some bad body positioning by Betis left back Moreno. 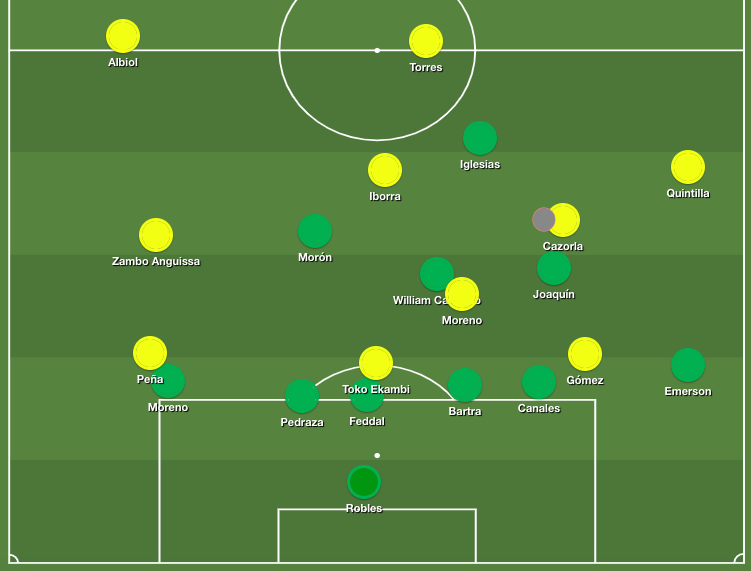 This was the biggest chance of the first half, which was otherwise quite calm and was mainly played on the middle third of the pitch; the result of two teams that attempt to play out from the back and are pitted against a good defensive system. Add in a serious lack of players going in behind the defense – especially Betis did bad in that aspect – and it had all the hallmarks of a typical LaLiga mid-table game. The fact that both teams played about the same amount of passes – 218 for Villarreal and 245 for Betis – underlines how even this match had been in the first half, considering both team’s style of play.

That does not mean the half ended goalless, however. In the 39th minute, striker Karl Toko Ekambi was on the end of a not especially well-worked set-piece by Cazorla and was able to head in the opening goal from inside the six-yard box. A serious example of disorganized set-piece defending by Betis, meaning Villarreal went into half-time with the lead.

Villarreal might have drawn up a plan of defending the lead from a somewhat deeper position than they had done in the first half. If so, that plan was binned after three minutes, because Betis’ right back Emerson hammered in a diagonal shot into the side netting in the 48th minute, which came after a clever lay-off by Iglesias. Level game with almost the entire second half remaining.

From that moment on, Betis took the initiative, racking up and for the first time in the game, they were able to pin Villarreal on their own half, as Calleja’s team was forced back into their own half in a 4-4-1-1 formation. The big problem for Betis now is the same as it was last season with Quique Setién: turning possession into chances. Betis have a tendency to pass for the sake of passing, and could do with more directness in their play.

Now relying more on the counterattack, the standout performer for Villarreal would turn out to be substitute Samuel Chukwueze, who came onto the pitch in the 55th minute. Chukwueze was a huge factor in Villarreal’s offensive transitions from the moment he stepped onto the pitch and acted as a walking ball progressor, as he constantly bullied Betis’ midfielders and defenders when the spaces opened up in transition.

In the 65th minute, he commenced on a dribble from the wing and passed two Betis players, before he was tripped over in comical fashion by Betis central defender Marc Bartra. The referee had initially missed it, but VAR granted Villarreal a penalty kick after four (!) minutes of reviewing. Naturally, the spot kick was converted by Cazorla.

From then on, it was a game of Betis versus a low defensive block, A low block refers to a team that retreats deep in their own half out of possession, generally only disrupting their opponents around their own box. of which we all know by now it can act as kryptonite for the Andalusians. In the 76th minute, after a really bad executed counterpress After losing possession, a team immediately moves towards the ball as a unit to regain possession, or at least slow down the pace of the counterattack. by Betis, a three-versus-three counter ensued. Two Betis defenders stuck onto Chukwueze, meaning there was a two-versus-one situation on the other end of the field. Gérard Moreno calmly found Toko Ekambi, who netted Villarreal’s third goal.

In injury time, Villarreal added another two more goals, ironically in time that was added to the game because of a VAR goal that went their way, which might be symbolic for Betis’ bad luck on the day. However, conceding two goals in injury time because nobody is tracking back on counterattacks is not bad luck. That’s mentality, mixed up with a lack of tactical awareness, as Villarreal were awarded another (!) three-versus-two counter, while Chukwueze blazed past Betis defenders as if they weren’t there to score the fifth yellow goal of the match. 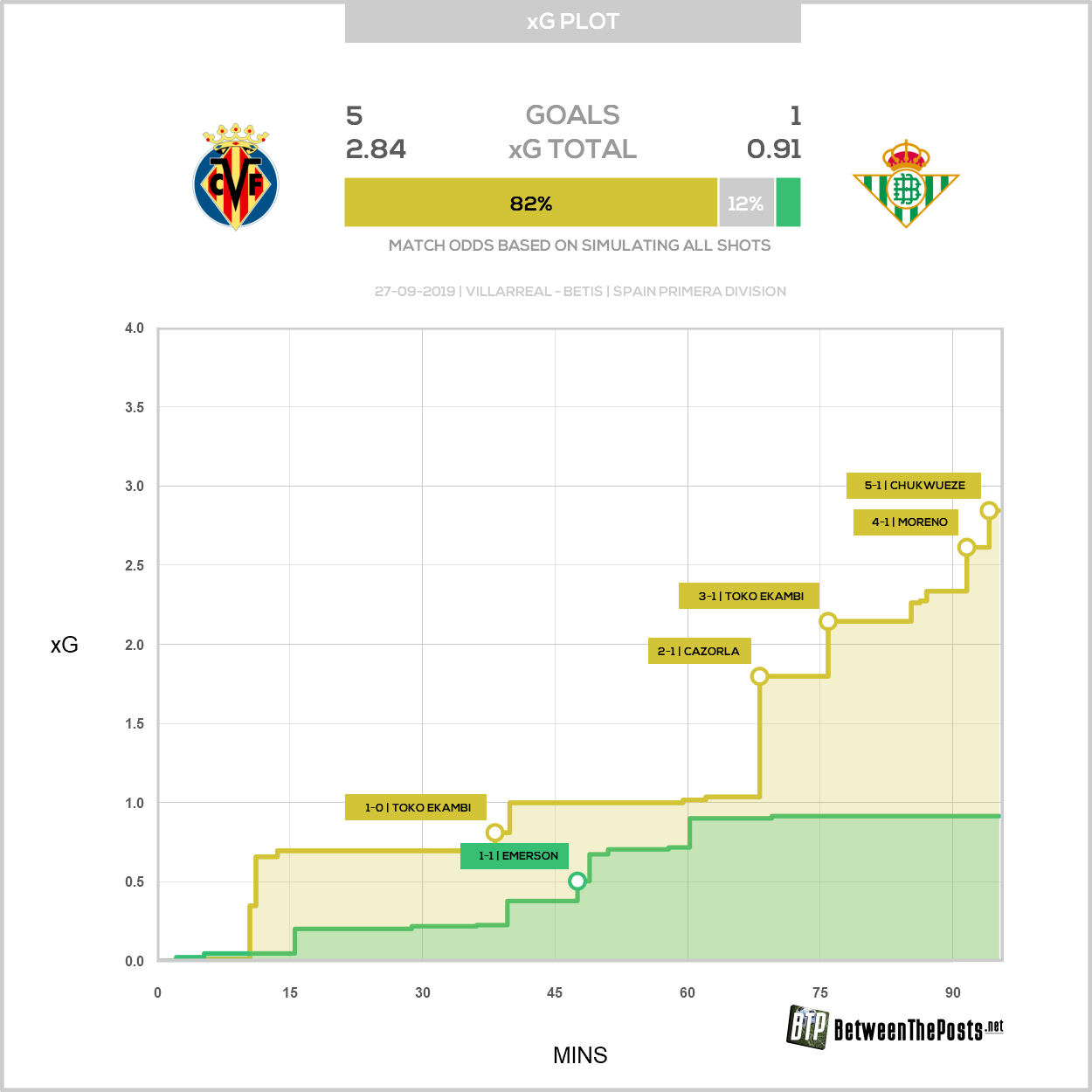 Before going into both teams, it should be noted that besides Chukwueze, the two best players on the pitch were arguably Joaquín – who was a squad player for Spain at the 2002 World Cup, seventeen years ago – and Cazorla – who was told he might never be able to walk again after a series of horror injuries. Both players still exuberate a genuine passion for the game that’s fantastic to see, let alone the skill they still possess. True examples for their younger teammates.

Having collected eight points from seven matches, Rubi has had a hard start to his life as Betis manager. There are some early signs that everything will be fine and Betis will contend for the Europa League tickets. Most notably the offensive production is okay, even though playing against extremely defensive teams will remain a problem with this squad.

Just like Betis, Villarreal should aim for Europa League qualification this season, which is granted by ending sixth or seventh (dependent on the Copa del Rey winner). They have a very solid midfield and individual quality up top, while being able to mix up a pressing approach with sitting deeper for parts of the match. 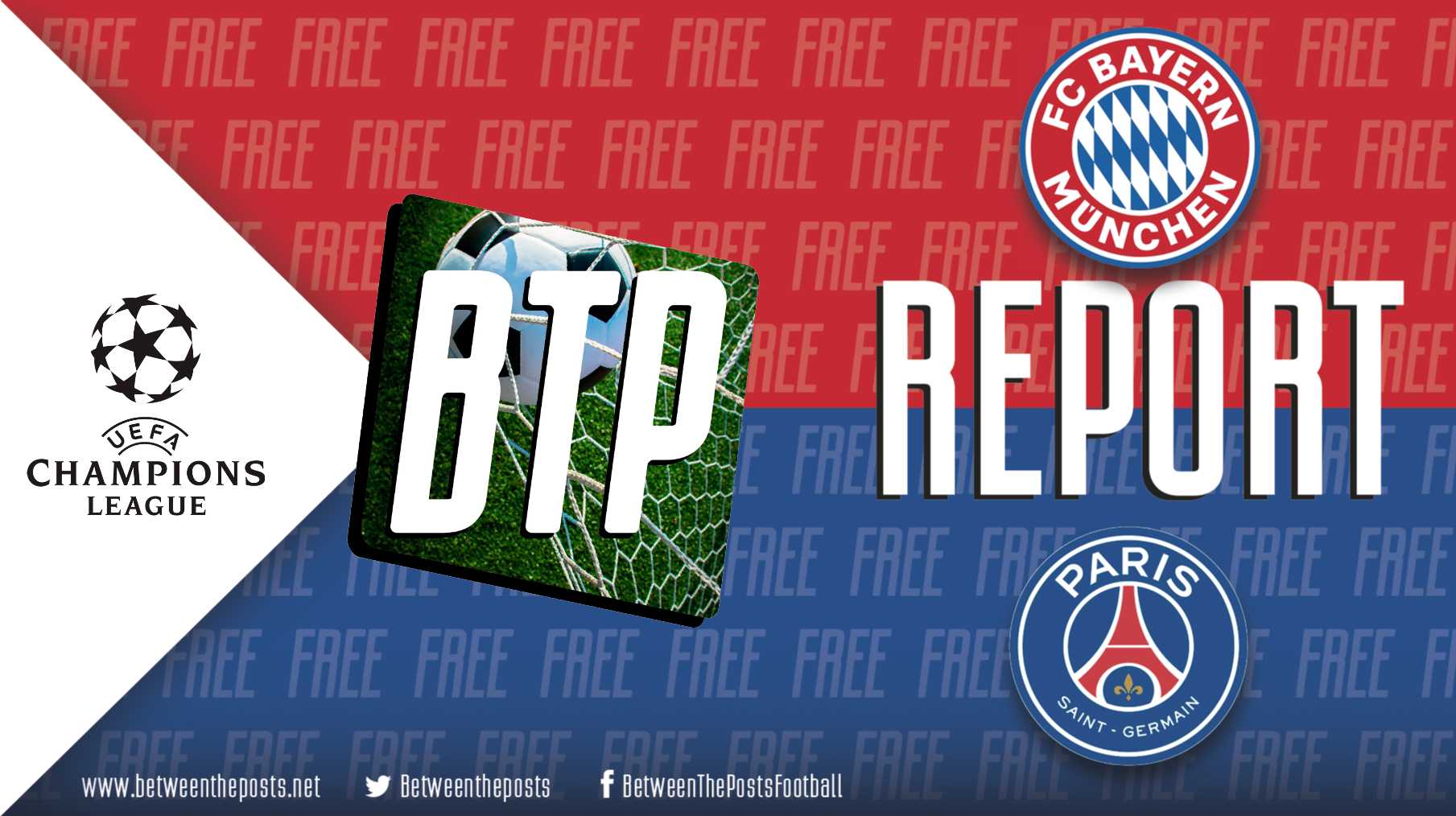 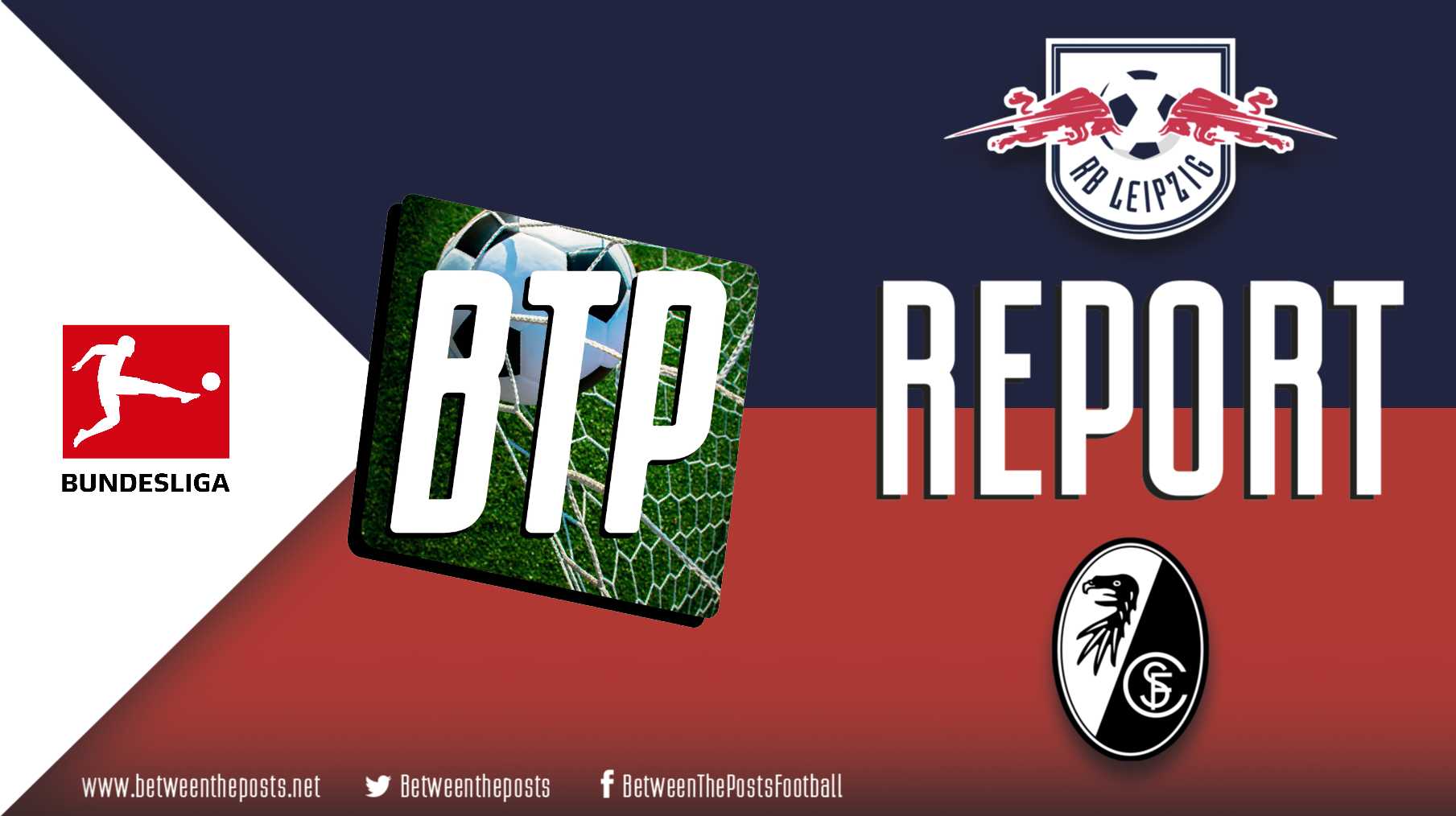