Dogged deep blocks and rapid breakaways are chief ingredients for a shock victory, but West Ham are no longer your classic underdog. In a duel where the favorites pushed them to offer more, they rose to the challenge, bringing old and new ideas together to seal a stunning result.

‘Survival of the fittest’ forces the kings of the natural realm to adapt if they wish to stay at the top. The beast that is the Premier League is no different. So now that a familiar obstacle has reared its head, would Liverpool choose to fight or flee? What better place to find out than in east London.

Long gone are the days where David Moyes and his outfit were a mere laughing stock. West Ham United have gone from strength to strength, backing up a sixth place finish at the end of last season with a sterling start to the new campaign while leading their group in the Europa League. Eager to fortify their seat at the top table, the prize for victory would be third place: a spot above the guests.

Liverpool’s quest for vengeance has laid down their ambitions at home and in Europe, marking out a 25 game unbeaten run. Yet, they cannot shake off the woes that have loomed over affairs on the field; Roberto Firmino is the newest name on a lengthy injury list that echoes the start of 2021. But within an arena where one must be predator or prey, a win was crucial to stay on the coattails of the summit.

West Ham may have earned plaudits for their success under Moyes, but he had no plan of appeasing neutrals in this clash. The hosts prompted Liverpool to force the issue from the off, waiting to strike on the break. Two minutes into the contest, this approach set away Michail Antonio on the left flank.

🗣 "The referee made it easy for himself."

Jurgen Klopp was not happy with West Ham's first goal as he felt it was a clear foul on Alisson pic.twitter.com/DoZjd6TzdL

The burly forward raced ahead of Virgil van Dijk to reach the ball, but the central defender blocked his cross to give away a corner. A dastardly delivery from Fornals set the trajectory of the cross above Alisson, whom Angelo Ogbonna dueled in the air. The goalkeeper failed to hold his own, steering the play into the back of the net with his left arm. A classic British ploy had proven to be Liverpool’s undoing, handing the hosts the license to frustrate even more.

Troubling England’s elite with a stubborn Everton outfit at the turn of the last decade, Moyes has picked up the slack from where he left off with his current team. In this game, they initially set up in a 4-4-1-1/4-4-2 formation where, from time to time, Fornals would push forward next to Antonio higher up the pitch to put some pressure on the central defenders. However, more often than not, they walled themselves into a deep block that would leave Antonio drifting at the edge of the center circle.

This setup took on a consistent asymmetry. From the initial 4-4-1-1 shape, Fornals often dropped back to cover the halfspace away from the ball if the ball were on the left flank. So a 4-1-4-1 or 4-5-1 block typically emerged where Rice was at the center of a quintet in midfield. Even some 5-4-1 staggerings arose if Saïd Benrahma dropped off to cover the flank and Fornals then shifted out wider in his place.

29th minute: defensive sequence from West Ham. Benrahma initially drops back to form a temporary back five since he anticipates the switch to Alexander-Arnold, before pushing forward into midfield. Fornals and Rice eventually jump out from the midfield, forcing a turnover from Mohamed Salah.

Fruitless search for an exit route

Angelo Ogbonna’s exit with a cut to his face in the 21st minute saw Craig Dawson enter the fray, but it made little difference to West Ham’s resolute display. On the other hand, a plan of action in transition was evident, but it seldom came to fruition.

Even off the back of his ACL injury, van Dijk’s physique and speed presented a more even matchup with Antonio. So, the striker routinely roamed over to the left flank, looking to target the room behind Alexander-Arnold. This strategy paid off in the leadup to the first goal, yet a lack of presence near the forward once West Ham won the ball led to phases where Moyes’ men could not get out of their half.

Liverpool could not break the deadlock in open play, forcing them to rely on a set-piece to get level. Aaron Cresswell and Rice nipped at Salah’s ankles, giving up a free kick. Stepping up to the edge of the box, Alexander-Arnold rolled the ball to Salah, who stopped it for the right back to aim a strike at goal. He obliged, whipping an effort around the wall, leaving Łukasz Fabiański rooted to the spot.

At half time, Moyes could have tried to hold out for a point. But an adjustment from him tweaked the Fornals’ role. The attacking midfielder no longer dropped off to shore up the block. Instead, he stood behind Antonio in a 4-4-1-1 system, where Dawson actively stepped into the room between the lines. 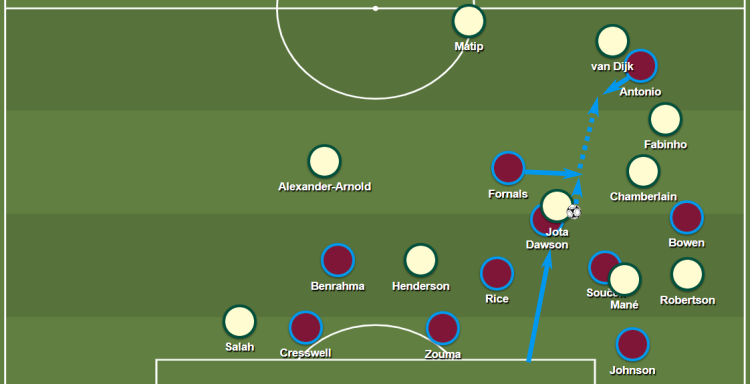 51st minute: Robertson takes a throw in, aiming the ball at Jota, who roams deeper between the lines. Dawson pursues him into the midfield, deflecting the play into the path of Fornals, who finds Antonio.

In close vicinity to Antonio, Fornals could link up more with the striker on the break. His positioning and trickery in tight spaces was a thorn in Liverpool’s side on the afternoon, also bearing fruit in more prolonged phases of possession. Fittingly, he would play a pivotal role in the next goal of the contest.

In the 67th minute, Dawson robbed the ball from Sadio Mané, poking it to Fornals. He then laid off the ball to Bowen, who threaded a through ball back into Fornals, whose strike slipped under Alisson to restore West Ham’s lead. Seven minutes on, they struck again. Another menacing delivery from a corner courtesy of Bowen found Kurt Zouma, who drifted to the far post and towered above the heads to thunder the ball home. Cue pandemonium.

"I don't know why in these situations Liverpool don't run back!"

Klopp made two substitutions to try and turn around the contest. Oxlade-Chamberlain made way for Thiago to bring more control in the middle of the park while Divock Origi replaced Jota in the middle of the front three. With a little under ten minutes left to go, the forward delivered a decisive impact.

Jordan Henderson drove into the final third, drilling the play into the path of Alexander-Arnold. The right back flicked the ball back to Origi, who cushioned it out of the air before rifling a volley beyond the goalkeeper. Halving the deficit, Liverpool had given themselves a lifeline. But West Ham were not intent on letting their bubble be burst. Takumi Minamino’s introduction looked to add offensive impetus, but the home team clung on until the final whistle.

What a win for West Ham! If their first half showing was stubborn, their display after the break, with Fornals at the forefront, depicts how the side are adding more strings to their bow. Discussions will abound about where this team can go, but for now, they should enjoy an outcome that aligns with their performances in the first third of the campaign.

Given Chelsea’s draw with Burnley, this loss will be even more frustrating for Klopp. This iteration of Liverpool in the context of recent title charges looks less assured defensively than the title winning outfit. What’s more, they have already ridden out several storms this season to get over the line. So such a result should spur the team to regroup ahead of a clash with a resurgent Arsenal in two weeks. 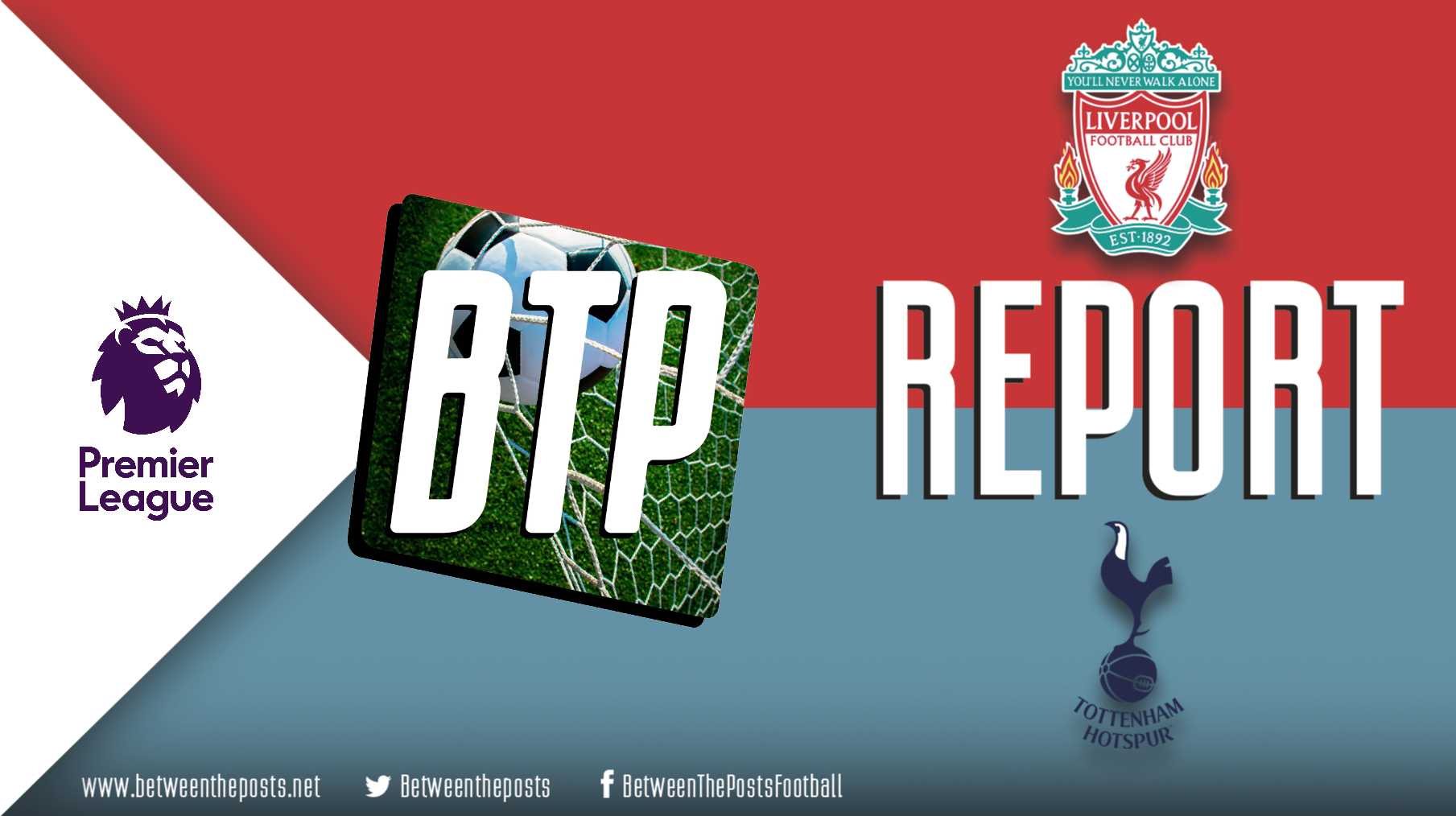 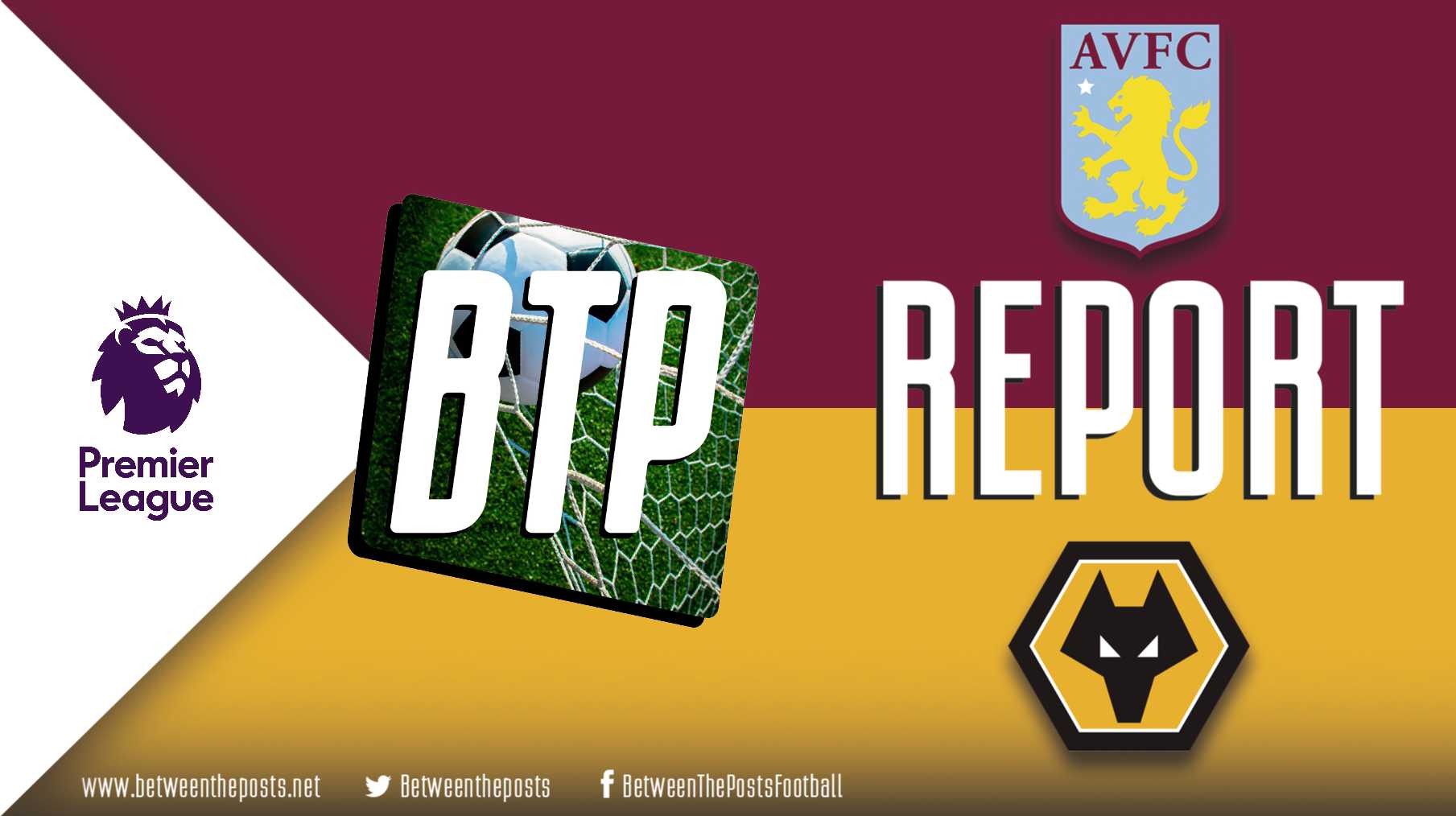