When Marco Rose was announced as new Borussia Dortmund manager back in February, there was a general feeling across television pundits and Football Twitter alike that the club finally had their man. Fast forward seven matchdays into the new season and there are a few glaring defensive issues that are yet to be fixed. In this piece, we find out why Dortmund are tactically struggling to keep it tight at the back and what future issues this could cause.

Seven games into the new Bundesliga season and things are, as they usually are at this time, incredibly close at the top of the table. A new-look Bayern Munich, under new head coach Julian Nagelsmann, are chasing their tenth consecutive Bundesliga title and as always, many have put Borussia Dortmund to be their main rival. However, their defense has struggled and despite being third, they have already lost two games and conceded almost double of those above them. To understand why this is happening, we need to look at their basic structure.

How not to use a diamond

Dortmund have mostly tried to implement a 4-diamond-2 formation out of possession, using all of the typical characteristics of pressing in a diamond. They have also used 5-3-2 setup and a traditional 4-1-4-1/4-3-3 shape, but this has been less common.

In all of these, Dortmund try to force the opponent wide and put pressure on the opponent’s buildup early on. However, the diamond formation isn’t made for this approach, as it has the majority of its players in central areas, leaving the wing zones outnumbered. This is basically the root of all of BVB’s defensive problems.

The strikers press their opponent’s central defenders from inside-out, using cover shadows When a player is positioning himself between the opponent that has possession of the ball and another opponent, he is blocking the passing lane. When applied the right way, his ‘shadow’ is effectively taking the opponent in his back out of the game, because the pass can not be played. to block their central passing options, forcing them outside. As soon as the ball is passed into the wing zones (to one of their opposing fullbacks), Dortmund’s central midfielder steps out and presses the receiving player while blocking the pass into the central areas of the pitch too.

Their pivot player closes down their rival’s player positioned in the halfspace If you divide the field in five vertical lanes, the halfspaces are the lanes that are not on the wing and not in the center. Because there is no touchline like on the wing, players have the freedom to go everywhere. But this zone often is not as well-defended as the very center. This makes it a very valuable offensive zone to play in and a lot of chances are created by passes or dribbles from the halfspace. and BVB’s central midfielder on the other side has to occupy the space vacated by said pivot player. 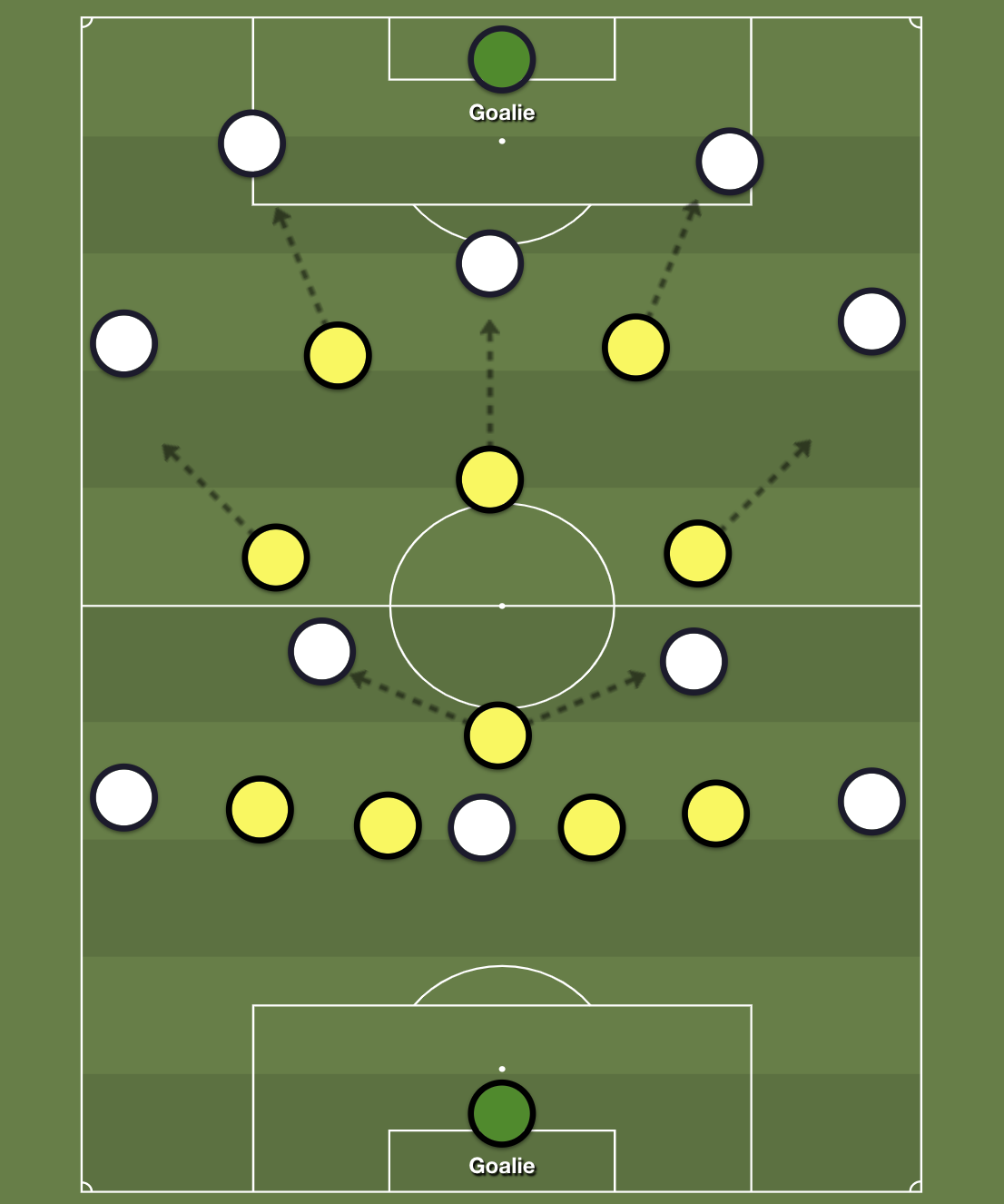 The biggest issue with Rose’s interpretation of this structure is that he accidentally weakens his team’s advantage of having a numerical superiority in the middle. Instead of playing a four-versus-three or a four-versus-two (depending on the opposing formation), Dortmund open themselves up to an underload When one team has less players in a certain area or zone than the other team. on the flanks, which is leading to their central midfielders having to cover a sizeable distance to put pressure on their opponents and prevent them from progressing the ball.

This leads to situations where Dortmund’s players are one or two steps too late and are unable to win the ball from that situation. A good example of this is in their 4-3 win against Leverkusen; four minutes into the match Bayer used Dortmund’s press against them by simply passing the ball to Bakker, forcing Jude Bellingham outside. This opens up the halfspace behind him, as well as Demirbay in the center of the pitch. Because of the large distances, Julian Brandt, Axel Witsel and Bellingham can’t close their opponents. Leverkusen then use their free players to easily bypass Dortmund’s press using the third man principle and open up the other side. 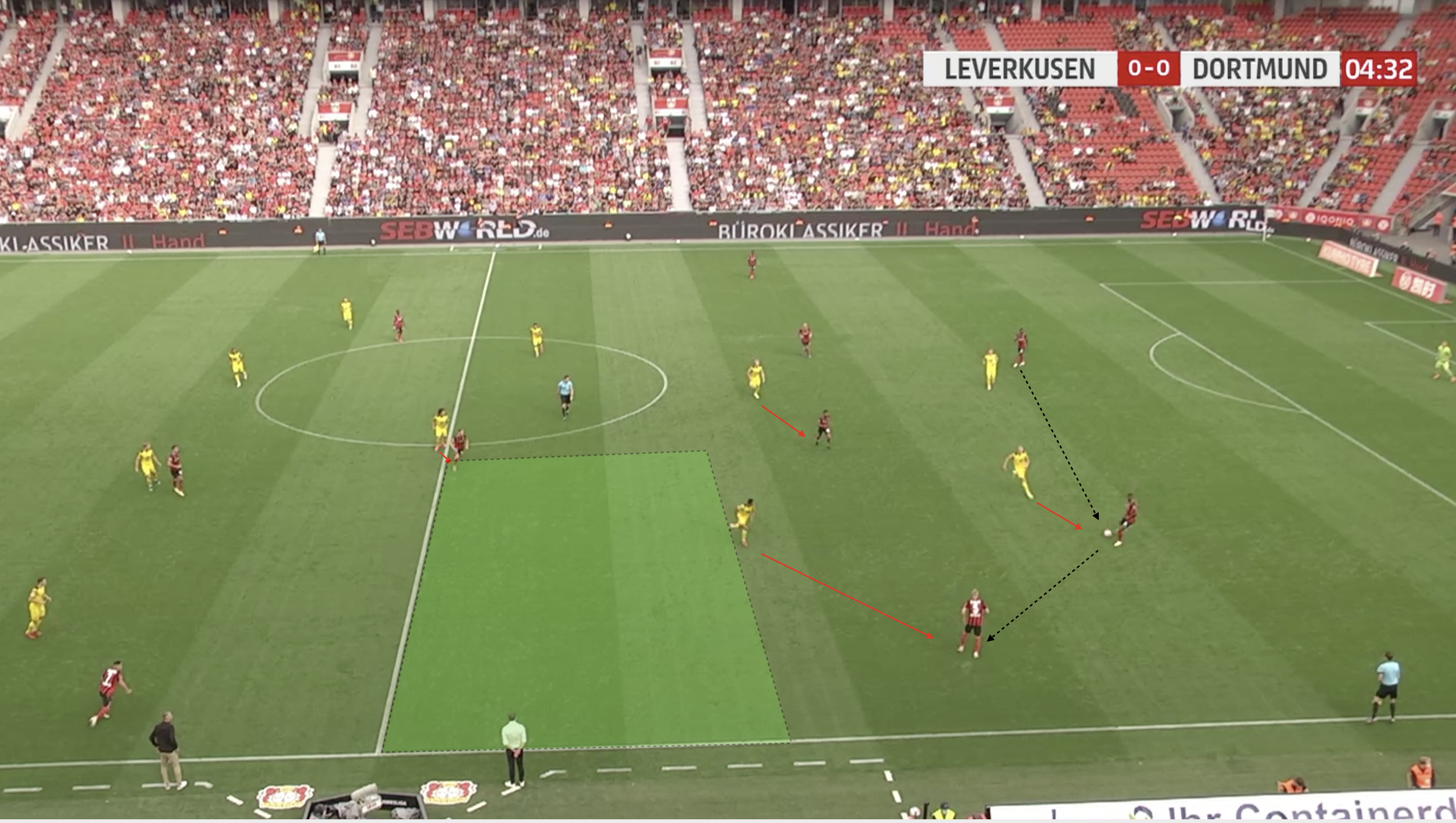 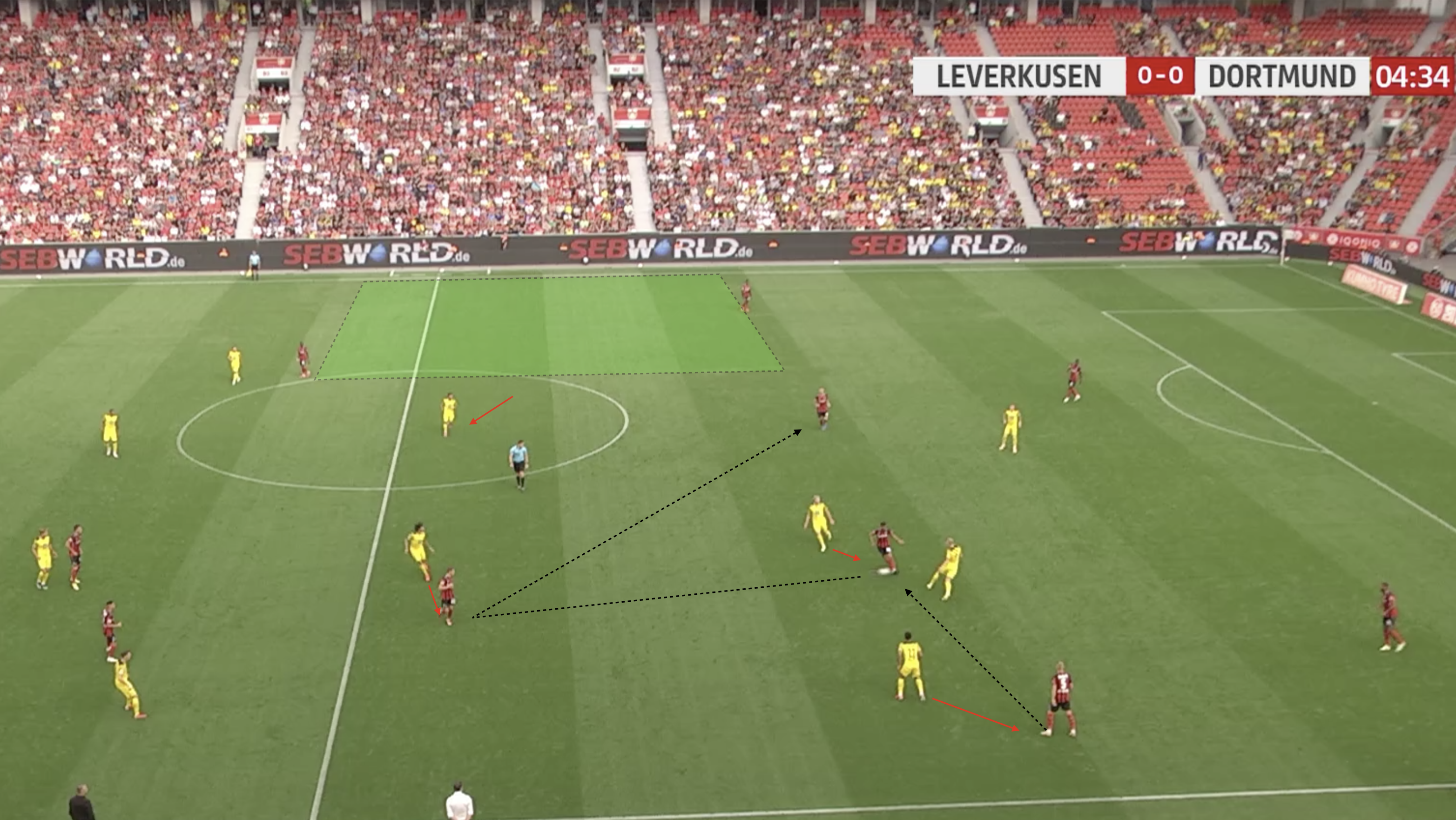 Dortmund’s next problem comes down to when their opponents bypass their pressure from the formation issue stated above. As soon as their opposition can switch play and the receiving player can attack the defensive line by dribbling towards them, Rose’s team lack compactness and basic behavioural aspects of defending with their backs to the goal.

Additionally, their approach is forcing them into a lot of one-versus-one situations which are more difficult to defend when playing a higher line. There are countless times where this happens across their games against Eintracht Frankfurt, SC Freiburg, Union Berlin, Sporting Lisbon and Besiktas (screenshotted below), where the end result is a high-quality chance. 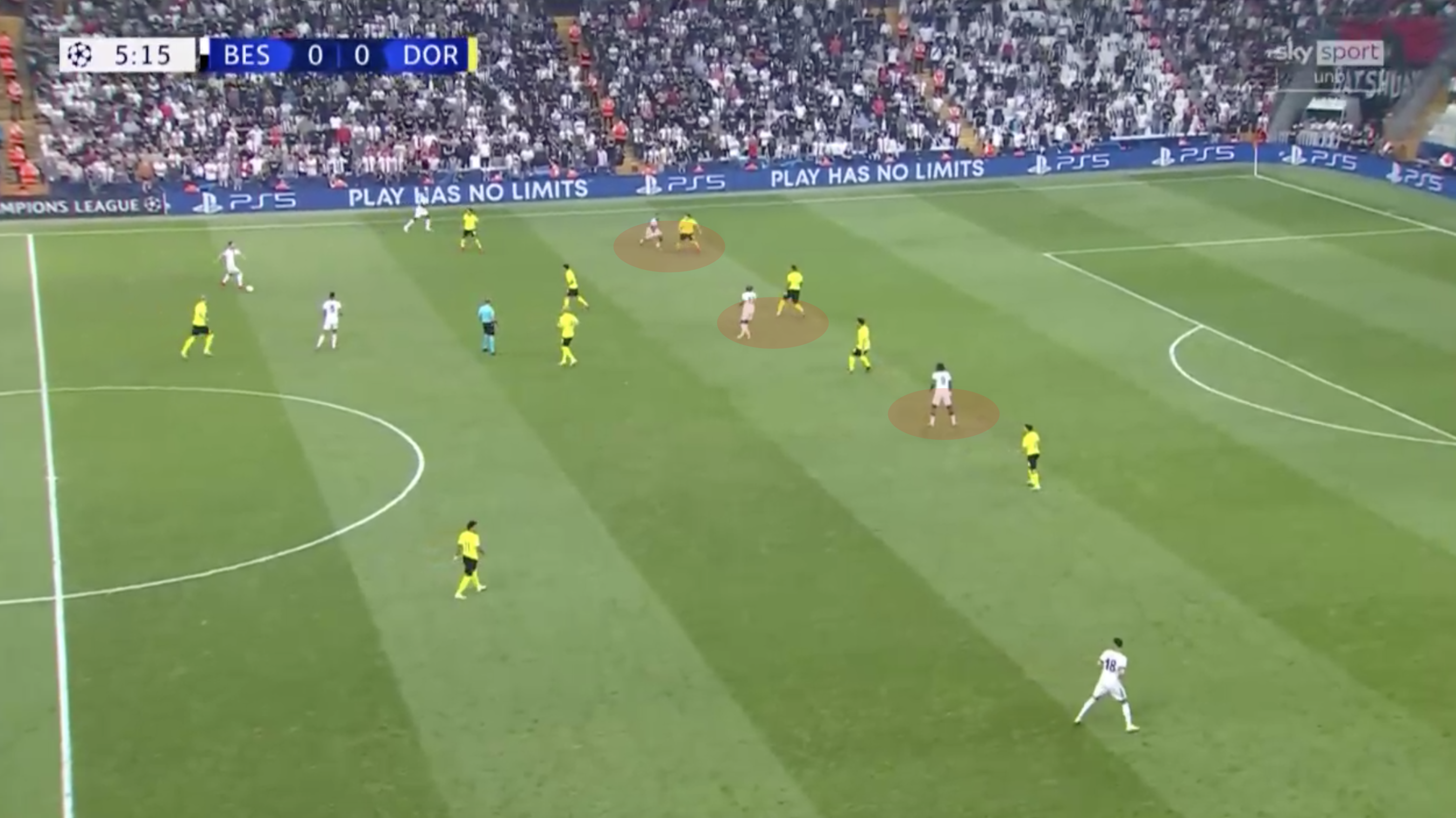 An aspect that has long troubled BVB is defending set pieces. Out of the thirteen goals they’ve conceded, five of these have come from corners and free kicks; this is the third worst after Greuther Fürth and Hertha BSC respectively.

Future expectations and the muscle in all this

So why does this matter in a team where one would expect to outscore the opposition anyway? Well, as soon as Dortmund can’t create enough high-quality goal scoring opportunities to achieve this expectation, they won’t actually win their games, as we’ve seen against Freiburg and Borussia Monchengladbach or require luck to get them over the line (like we saw against. Union Berlin and Sporting Lisbon). 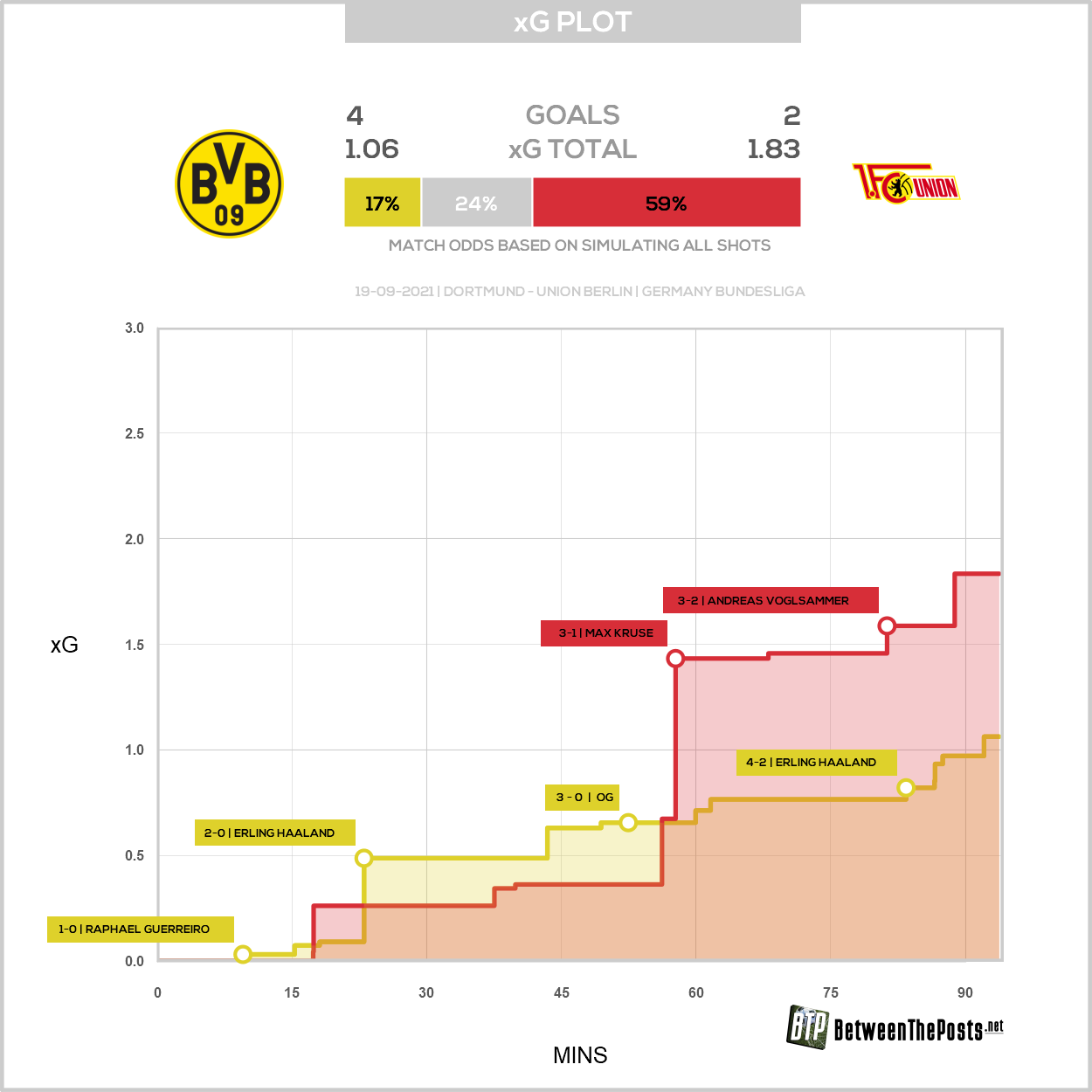 This could be a bad omen. If we look further at their underlying stats, we can see they have scored five goals more than their expected goals total. For a Champions League club they are horribly allowing more expected goals against than they should. If you put this into context that we are only early into the season and take into account the individual quality of their opponents so far, it’s not a healthy foundation for a team that should be challenging for the Bundesliga title.

Additionally, setting up a press in Dortmund’s way, that forces your players to cover a lot of ground leads to the necessity of being intensive and fast in order to actually put pressure on your opposition, but to create that you need to build an environment in training simulating similar conditions. Judging by the amount of muscular injuries Dortmund are currently experiencing suggests that they are set up in a system that is failing them and pushing them to their physical limits.

This is something that Dortmund need to repair quickly, as they’ve already lost two games and have had close calls against teams they’re expected to easily win against (Hoffenheim, Union Berlin and probably Leverkusen too). Injuries are depleting their squad and they’ve yet to face any of last season’s top four, which all comes at a congested time of the footballing calendar. Relying on second choice picks in a structure that isn’t working could be the downfall of Marco Rose this season. 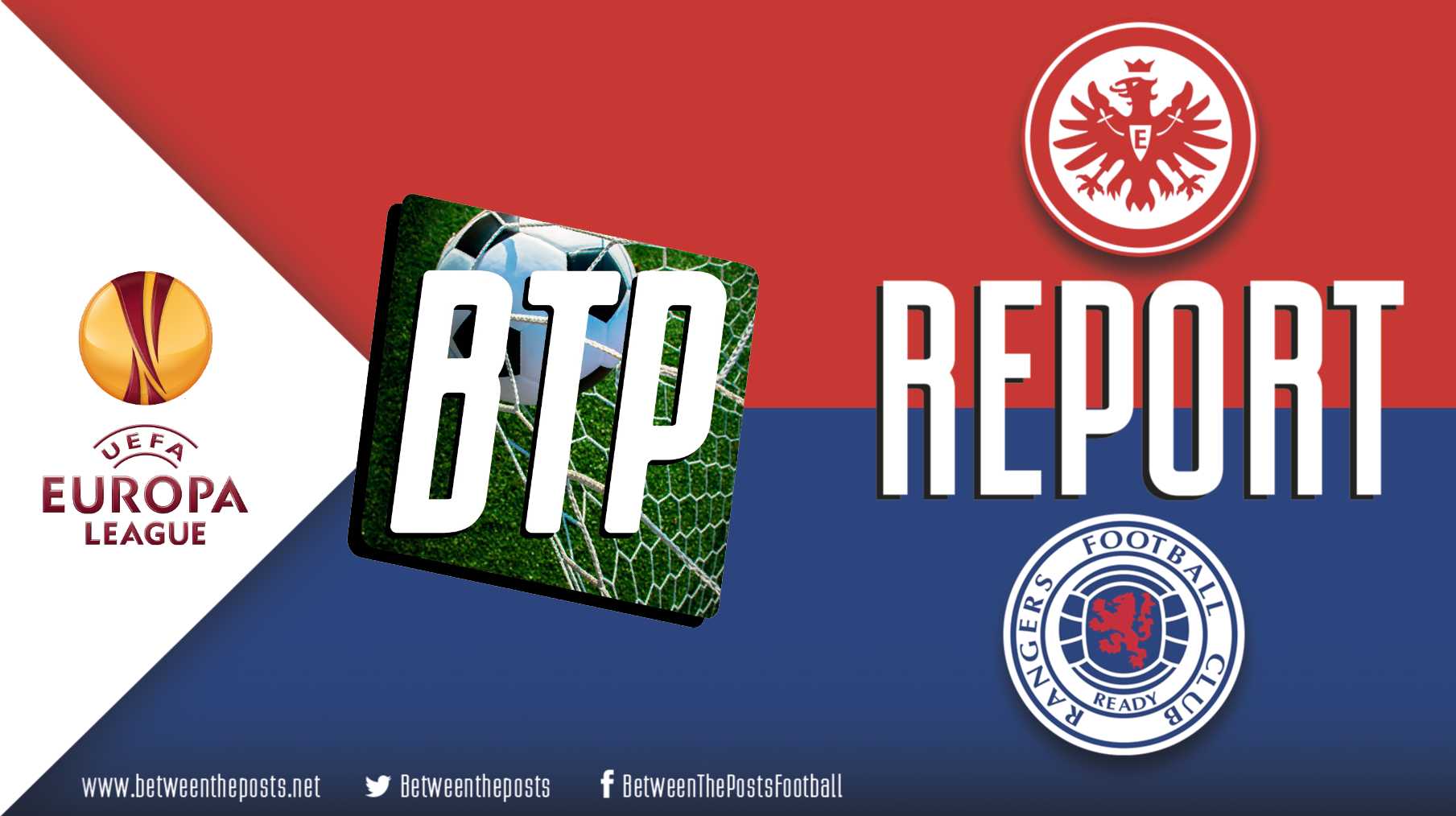 Eintracht Frankfurt – Rangers: Frankfurt Prevail On Penalties After A Tense Affair In Seville (1-1, 5-4 after penalties)