Wolves enjoyed the majority of possession in this game but often struggled to make breakthroughs against the organized 5-3-2 shape of Sheffield United, who had taken the lead early on. When the away side had the ball, they showed glimpses of the incisive wing-play which has helped them to defy expectations so far this season. Wolves eventually equalized after the hour mark but were unable to push on for a winner.

This match promised to be interesting from a tactical point of view, as both teams have made their name in the last couple of seasons as being particularly tactically strong compared to most promoted sides.

In particular, both teams are known for their respective three-at-the back systems. Wolves under Nuno Espírito Santo have used both 3-4-3 and 3-5-2 systems in the past eighteen months in the Premier League, and attack proficiently through the wings, utilizing switches of play extremely well.

Chris Wilder’s Sheffield United also use a 3-5-2 formation, with an attacking game that can be fairly wing-focused. The unorthodox aspect of their play which many people have identified is their use of overlapping fullbacks to help create overloads When one team has more players in a certain area or zone than the other team. leading to crossing opportunities in wide areas.

For this game, Wolves went with a 3-4-3 formation. In terms of personnel, there was a league debut at center-back for Max Kilman, due to Willy Boly missing out through injury and Romain Saïss being suspended. Further up the pitch, there was the accomplished midfield duo of João Moutinho and Rúben Neves. Meanwhile, Adama Traoré and Diogo Jota lined up either side of Raúl Jiménez in the front three.

Wilder made two changes from the side that drew with Manchester United last week as goalkeeper Dean Henderson and center-back John Egan returned to start at the expense of Simon Moore and Phil Jagielka. In midfield was the trio of John Lundstram, Oliver Norwood and John Fleck, who have impressed this season. Up front, Sheffield United’s top scorer in the league so far, Lys Mousset, partnered David McGoldrick. 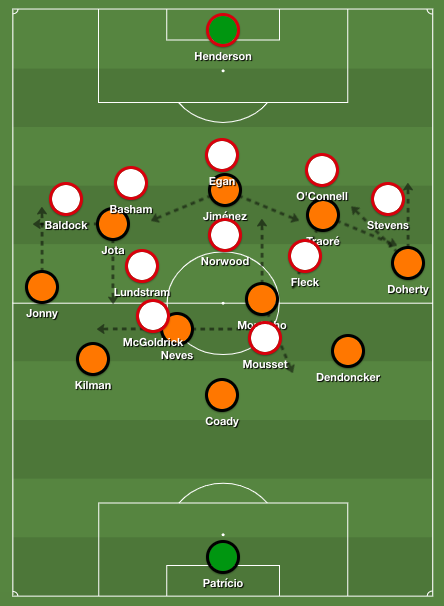 Wolves in possession against Sheffield’s 5-3-2 shape.

The away side managed to take the lead in just the second minute of the game, as Mousset slotted the ball past Rui Patrício following George Baldock’s cross. This goal defined the match, as it allowed Sheffield United to sit back, putting the responsibility on Wolves to chase the game from early on.

Wilder’s side spent much of their time in a 5-3-2 medium block. Firstly, the two strikers Mousset and McGoldrick were usually quite passive when it came to pressuring the Wolves center-backs, giving them a fair amount of time on the ball. Every now and then one of them would step up onto one of the wide center-backs of Wolves, but they rarely pressured Connor Coady in the central role.

The shifting of Sheffield United’s midfield three to control the width of the pitch is very impressive, and something that teams can often struggle with when playing a  3-5-2 shape. Furthermore, the placement of their cover shadows When a player is positioning himself between the opponent that has possession of the ball and another opponent, he is blocking the passing lane. When applied the right way, his ‘shadow’ is effectively taking the opponent in his back out of the game, because the pass can not be played. made it difficult for Wolves to make any kind of penetrative passes through central areas, especially combined with the tight marking of Traoré and Jota by Sheffield United’s wide center-backs, which made it difficult for them to receive between the lines. Wolves had to resort to chipped passes into the forwards if they wanted to progress centrally, which had mixed success. 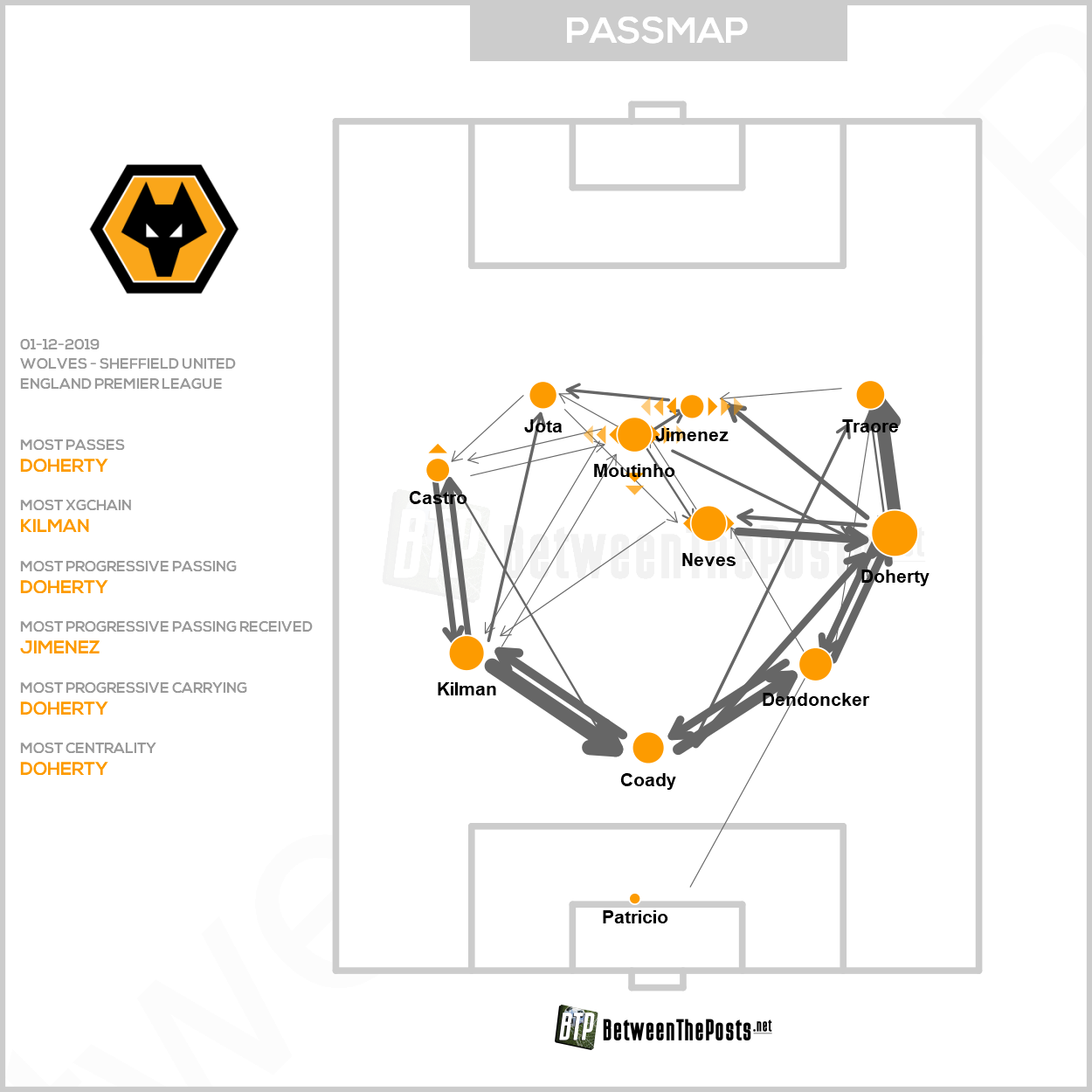 The passmap shows how well Neves and Moutinho were starved off passes.

It was also difficult for Wolves to break through in wide areas. As previously mentioned, the shifting of the Sheffield United midfield trio was strong, which helps them to be very good at squeezing the play when the ball goes into wide areas.

The wing-backs of Sheffield United could also be active in closing down their opposite numbers from Wolves. Meanwhile, the central midfielders were covering the routes back inside, and the backwards pressing of Mousset and McGoldrick could further limit the space and make it harder to move the ball inside from wide areas for Wolves.

Wolves’ wing-backs and wide forwards sometimes rotated positions, which did little to open up space in the middle. It did sometimes allow Traoré to get into more isolated situations on the wing though where he can try to use his individual strengths.

On other occasions, both Traoré and Doherty would occupy the wing, leaving the right halfspace If you divide the field in five vertical lanes, the halfspaces are the lanes that are not on the wing and not in the center. Because there is no touchline like on the wing, players have the freedom to go everywhere. But this zone often is not as well-defended as the very center. This makes it a very valuable offensive zone to play in and a lot of chances are created by passes or dribbles from the halfspace. vacant between the lines of Sheffield United. This vacant space would then be filled by Moutinho breaking forward, but it was still difficult to get the ball into the away side’s compact shape.

Arguably Wolves’ best moments came in these cases where Traoré would drop out into wide areas outside the Sheffield United defensive block A defensive block is the compact group of defenders that defends a particular zone, either their own half in a medium defensive block, or the zone around their own box in a deep defensive block. where he could receive the ball to feet and look to inject tempo into Wolves’ attacking endeavours with his explosive dribbling. He had the ability to go down the line or look to dribble diagonally into the right halfspace. 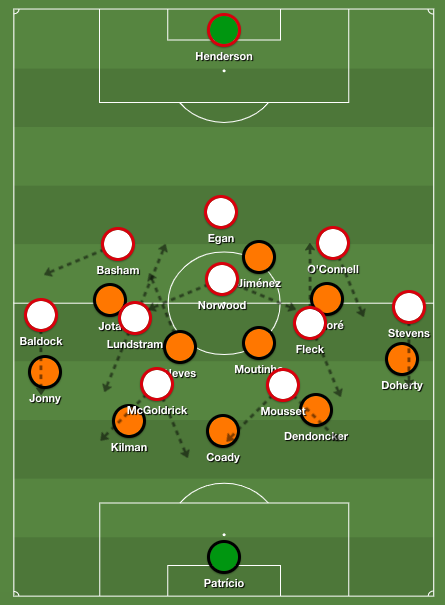 As previously mentioned, Wolves had the majority of possession in this game. However, there were still some moments to be found in which Sheffield United showed their prowess in wing-play, where the dynamic that they create in these areas can be quite entertaining to watch.

They instead played direct passes into the channels, where Mousset and McGoldrick were willing runners or played incisive attacks through the wings. The constant challenging of the channels by the strikers firstly offers a lot to Sheffield United through helping to stretch the opponents’ defense and allowing them to gain territory.

The central midfielders Fleck and Lundstram take up good positions between the lines, as well as making diagonal runs towards the touchline to give another option in behind – a common and important role of the central midfielders in a 3-5-2 shape. The wing-backs initially provide the width, but they can of course be overlapped by the wide center-backs when the opportunity arises.

The teams went in at half-time with Sheffield United ahead via Mousset’s early goal. In the second half, not too much changed about the pattern of the game as Wolves continued to look for their breakthrough against the organized defensive scheme of Sheffield United.

Eventually, in the sixty-fourth minute, they found it via Matt Doherty. The Irishman found himself in an unusual position for a right wing-back – on the left-hand side of the penalty box. From there he was able to arrive at the back post to head home Jiménez’ floated cross.

The equalizer still did not change the pattern of the game though, in fact Wolves’ possession share only increased further as Sheffield United’s general level seemed to drop slightly as the game went on. The away side produced nine shots in the game but only two of those were in the final half hour.

Interestingly, Wolves coach Nuno decided not to use any of his substitutes in this game, preferring to stick with the same personnel and tactics throughout. Wilder meanwhile did eventually make personnel changes, albeit quite late. He ended up replacing both strikers with Oliver McBurnie and Callum Robinson finishing the game as the forward partnership. Luke Freeman also made a very short cameo replacing Lundstram.

In the end, neither team was able to break the deadlock, and the game finished 1-1. 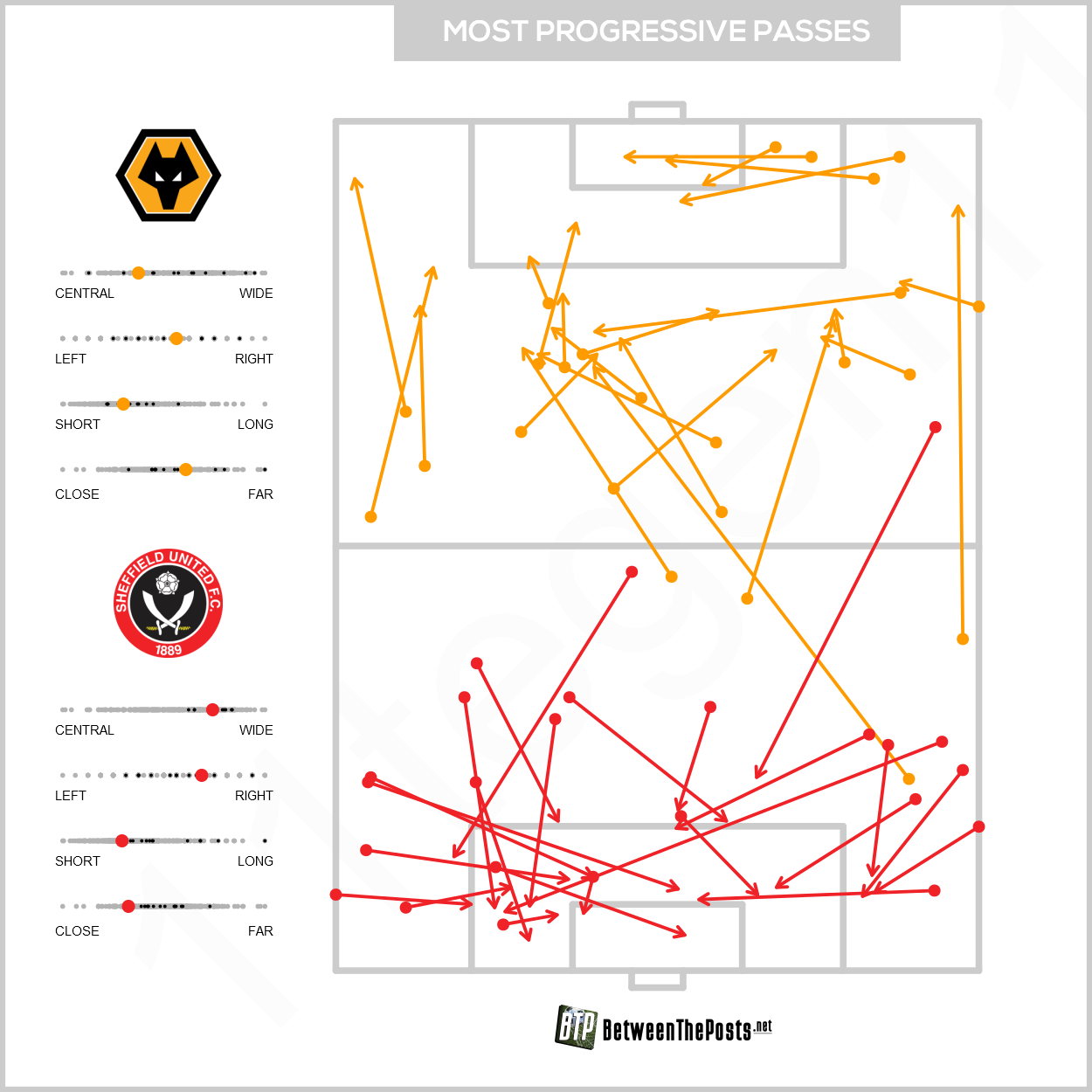 The early goal for Sheffield United put Wolves in a tough position and the home side struggled for large parts to create breakthroughs. Probably the brightest player for them was Traoré who was able to create dynamic situations with his dribbling in a game where the rest of his team were struggling to generate a good attacking tempo. Wolves find themselves in sixth position, level on points with Tottenham Hotspur but closely pursued by several teams.

Directly below Wolves is Sheffield United in seventh place, testament to the impressive results they have been picking up in their first season back in the top division. A draw away at Wolves is another such result, and they again gave a decent account of themselves, particularly from a defensive organization standpoint. 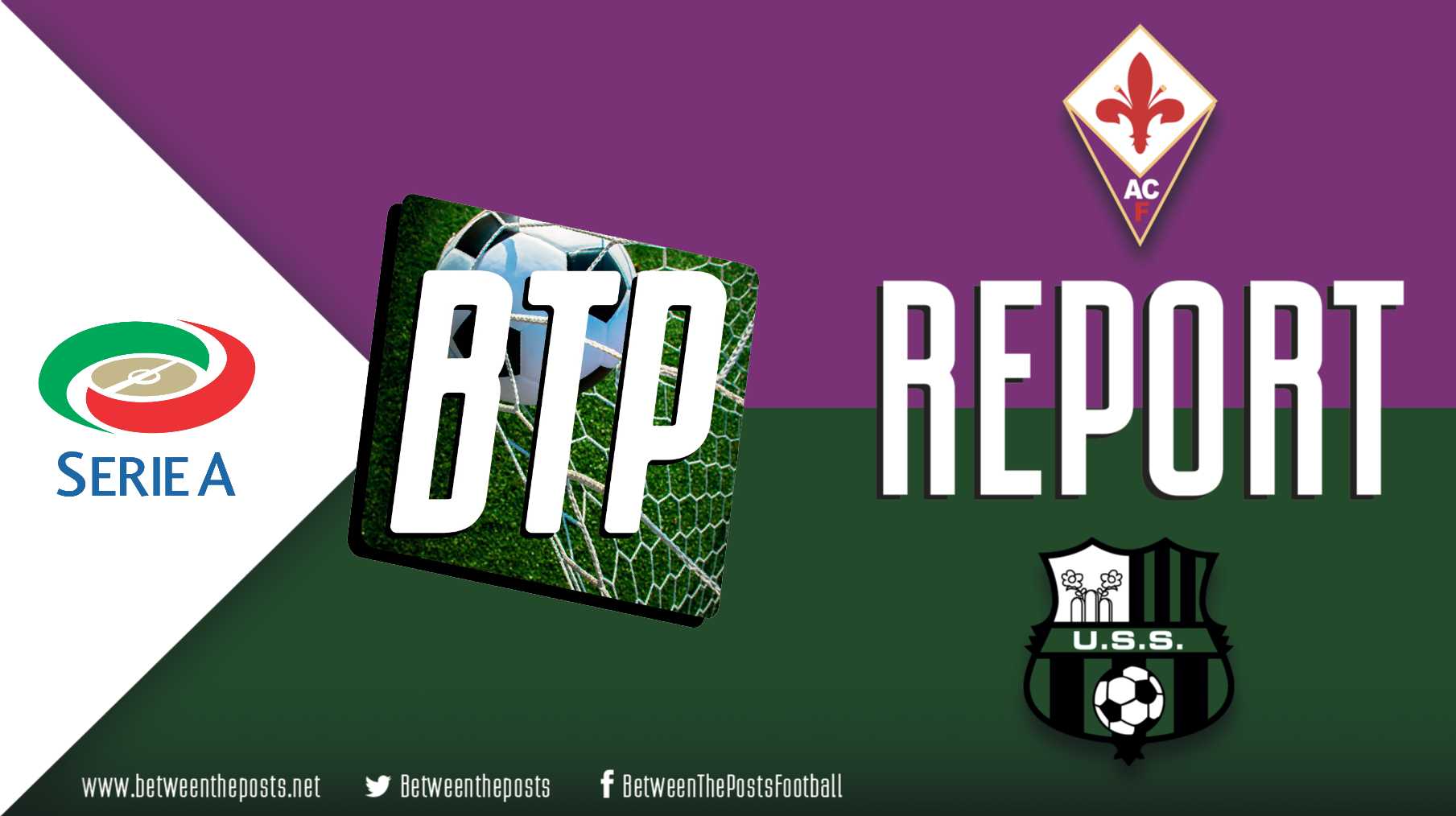